Summary: Upper Swaledale is gorgeous and this walk of diverse character celebrates the unique character of the area. From the remote and characterful hamlet of Keld we follow the Coast to Coast Path by following the River Swale downstream to Ramps Holme Bridge and on the way we climb briefly from the valley floor to visit the airy setting of Crackpot Hall where the most striking view of the meandering valley can be enjoyed. A brief excursion into Swinner Gill is also a bonus. On the return the walk follows the valley floor once more before climbing to Kisdon Side. Here wonderful ancient deciduous is walked through before returning to Keld. An encore to the walk can be enjoyed by walking the short distance from the car park to Catrake Force. It is a fitting finale to a super walk. 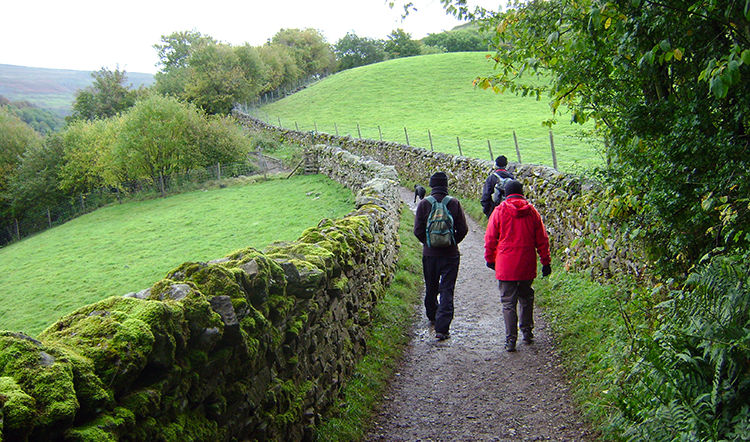 Setting off from Keld 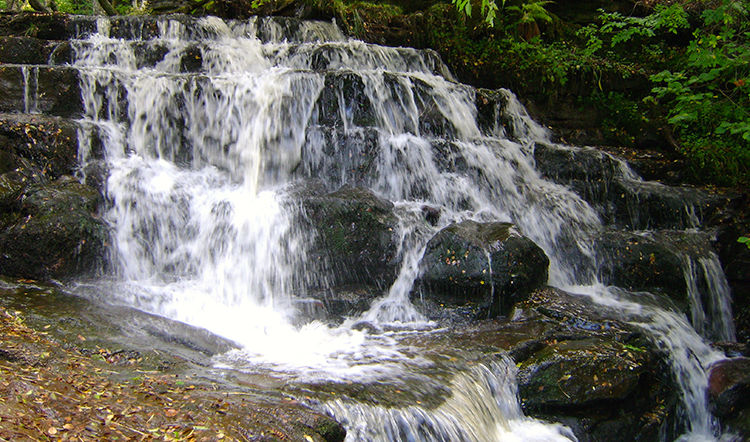 I was excited as I set off walking in the company of Dave, Jan and Steve on this autumn walk of Upper Swaledale. Though I had been to Keld and Upper Swaledale quite a few times I have always rated the area as one of the best in the Yorkshire Dales. Perhaps it is the remote nature, it takes quite an effort to get to Upper Swaledale in the first place. As we were staying in Reeth for a short walking break it only took us the half hour of bumpy road travel to get the car parked in the right place to take off on a ramble. So recently familiarised with the first part of the walk, I had been here only last year with my wife Lil, I led the way down the Coast to Coast Path cum Pennine Way Path too, to the River Swale and across the footbridge to East Gill. We were on our way and I was thrilled. I guess we all were. 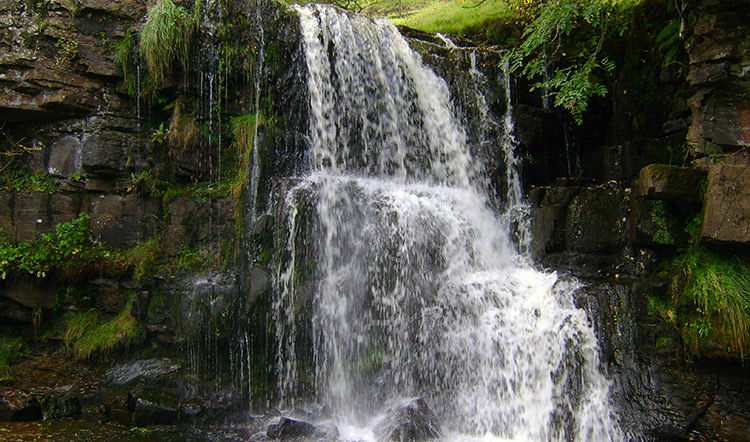 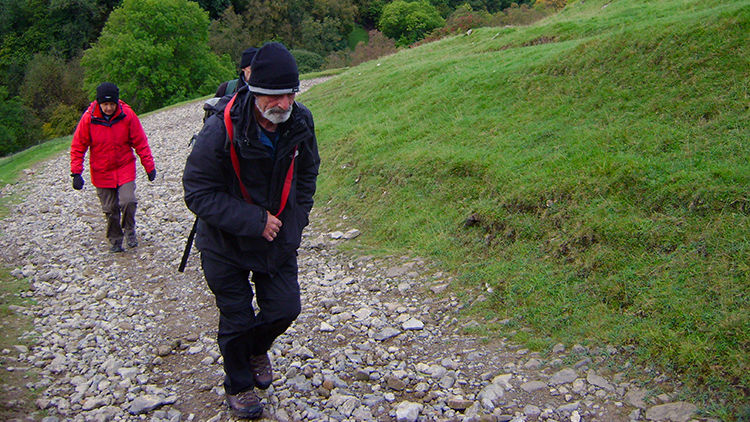 I left the path temporarily to get up close to East Gill Force. I have always had a close affection for the waterfall ever since I first set eyes on it during the Coast to Coast walk of 1994. On that occasion I had also been in the company of Dave and Steve during that first seminal long distance walk. After enjoying some personal time at the waterfall I rejoined the Coast to Coast Path while the Pennine Way took itself off the other way and I climbed on the C2C Path to Beldi Hill which took us to a height over the Upper Swaledale valley floor. In a while that height would give us great reward. 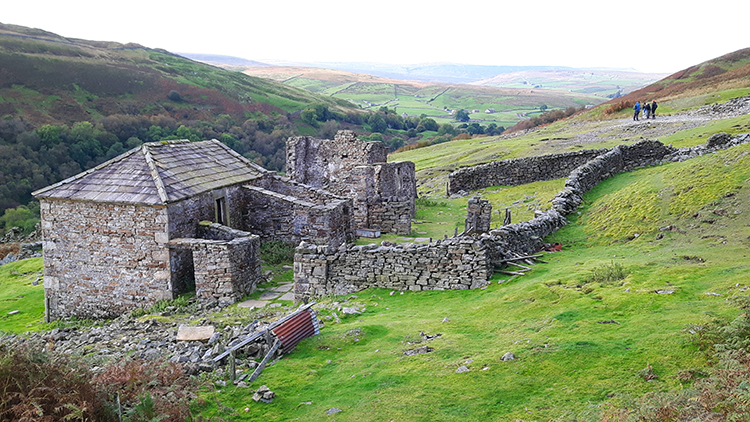 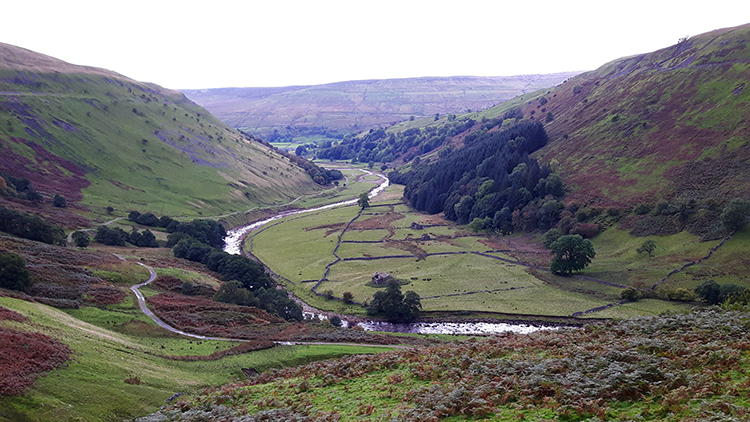 Beldi Hill was passed and we followed the path to Stony Hill. At Stony Hill the path forked and their was a choice to make. You could make one too. I chose to fork left and continue uphill towards Crackpot Hall while my walking chums chose to keep right and follow the path down to the Swaledale floor. I so wanted to visit Crackpot Hall once more. History of the place is scant but the current ruin is that of a farmhouse dating from the mid 18th century. It was an impressive building and is now an impressive ruin in the most impressive setting. The tremendous view of Swaledale we enjoyed at Stony Hill was available to inhabitants of Crackpot Hall too. After taking in the atmosphere of the place I continued from Crackpot Hall along a path into Swinner Gill. 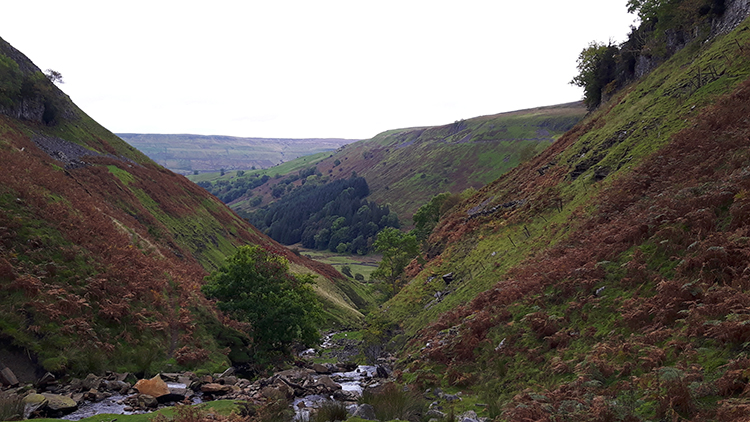 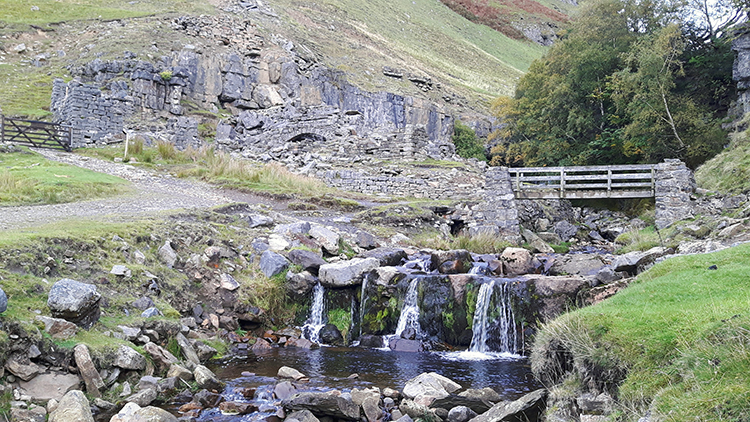 It was exposed as I walked around the curving path and entered Swinner Gill. As I continued the path edged me above the gill at about 50 metres from its floor. A slip could have caused quite a tumble so i paid attention to where I was putting my feet until the path led me down to the foot of the gill from where I stepped across the watercourse. Then I led myself to the path which led me out of Swinner Gill and back into Swaledale. 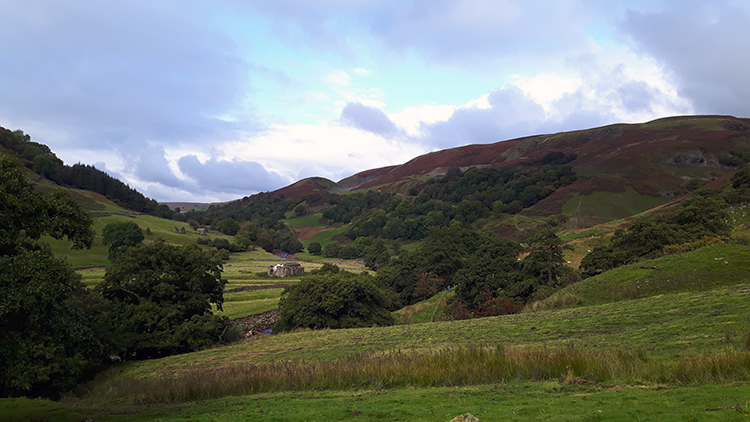 Looking back towards Keld 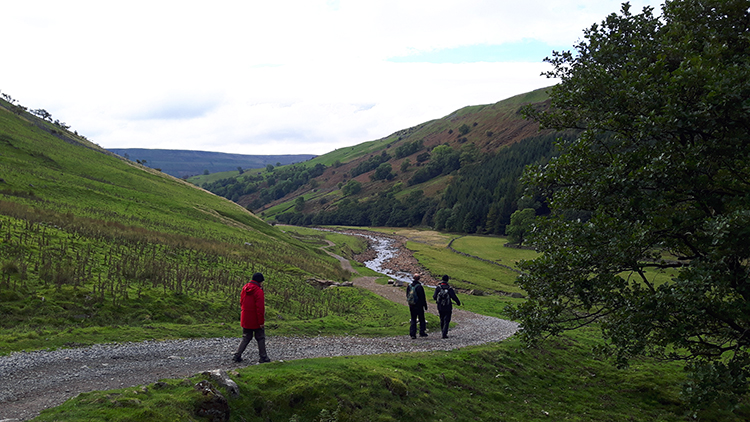 Looking ahead into Swaledale

I met up with Dave, Jan and Steve at Fair Yew End and then we continued on our way on a bearing now due south alongside the River Swale as it trundled down the widened valley towards Ramps Holme Bridge. More than one mile away, in fact just about two kilometres south of us, was the footbridge which we would cross to begin our return journey. This stage of walking was the most leisurely of all. Not one of us was in a rush and even Keira, Steve's well mannered Dog, dawdled along. Unless a Rabbit appeared that is and when they did Keira simply played at chasing them. As we dawdled the River Swale seemed to too. While it crashed through the environs of Keld in waterfalls and rapids and while further downstream it is a bigger, faster and wider prospect the Swale is at its most benign here. So it seems. 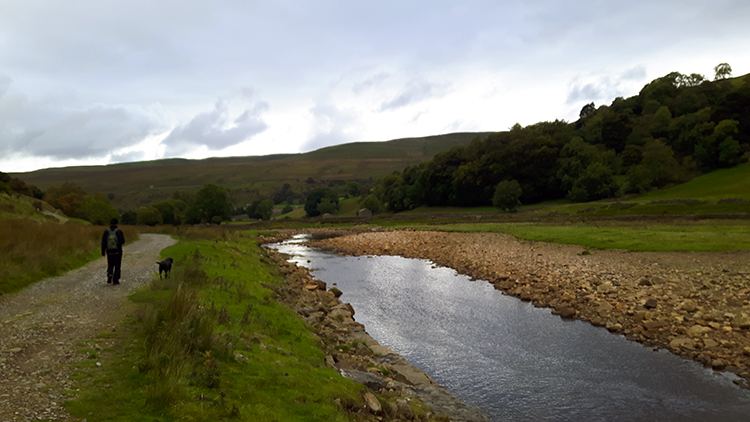 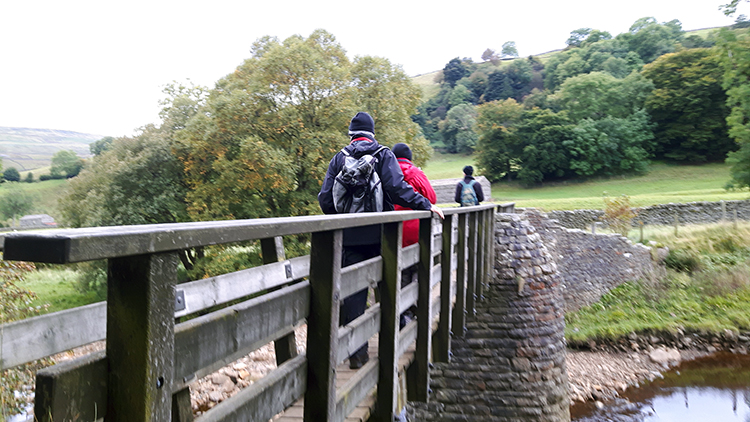 Dawdle on the heading south we continued. On a couple of occasions we met walkers going the other way. They were not in a hurry either. All was easy going and everything was entirely pleasant. While the skies kept overcast the clouds did not break and we remained dry. Despite it being mid October it was quite mild too. Things were all good. After reaching Ramps Holme Bridge and crossing the wooden structure which sits on well structured natural stone pedestals we stopped for a refreshment break. We chatted about things. At least I think we did. I was chilled out and cannot remember. 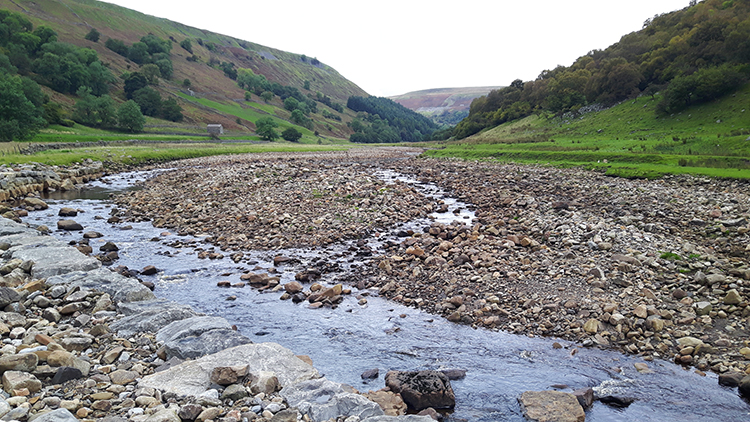 Shingle in the Swale 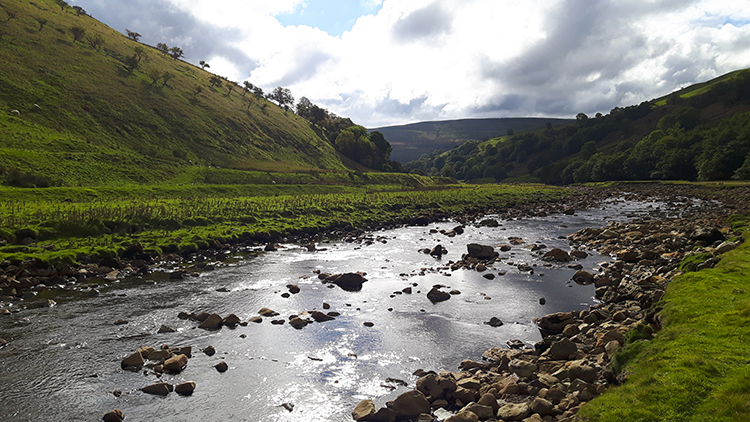 We now headed north and followed the river Swale upstream. Now for something I do remember. On this stretch my colleagues walked ahead of me while I dallied. I looked to the river and imagined a memory when I first visited Swaledale as a schoolchild. I still remember walking in a school group on a bank above the river. Being small it seemed much bigger than how I imagine it now but I thought "it must have been on a path along one of the contributing watercourses, such as Swinner Gill or Gunnerside Gill. Perhaps it was Old Gang Beck near Surrender Bridge. Yes, it must have been to explore Swaledale and the history of lead mining in the dale". Yes, it now seemed to make sense to me.

The river continued to flow as my thoughts had done. I then returned my mind to the present and proceeded to catch up with my pals. While still enjoying looking into the waters of the river though as the autumn sun was now beginning to break though the cloud and make pleasant reflections. 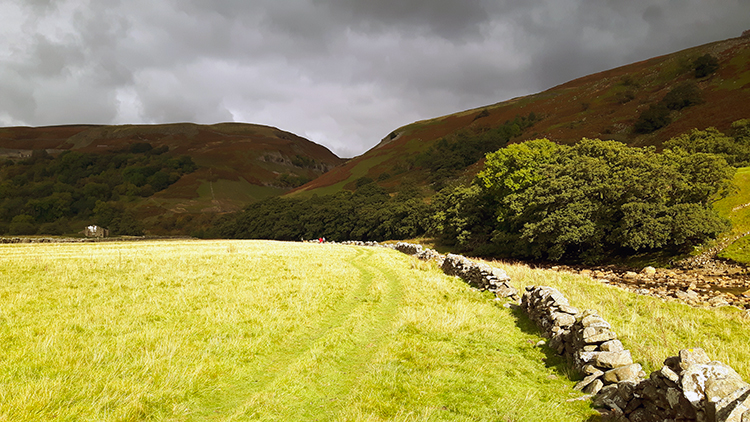 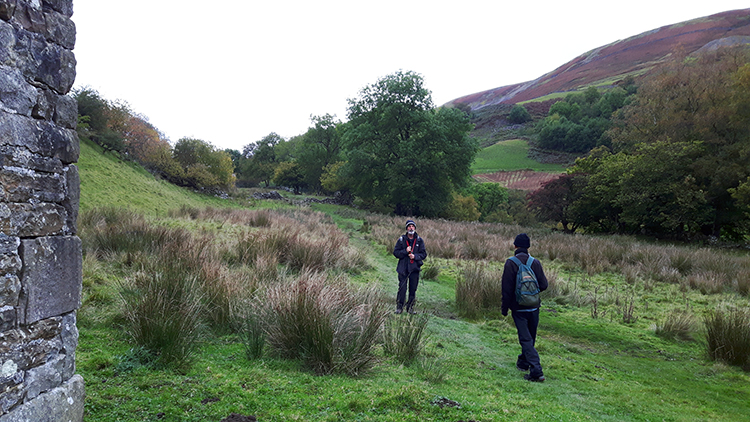 Climbing to Kisdon Side

The low sun that October brings seems to heighten the brightness. Perhaps due to the fact it shines directly into the eye-line when facing it but it is a fact that when it came out in this unique piece of the valley everything seemed to light up appreciably. The grass is the pasture on the river level took a bright glow when full sun hit it. The rich autumnal colour of the species of tree around which included Beech, Ash, Rowan, Alder and Oak took on a greater vivacity. Without sun the scene was lovely. With sun the scene was gorgeous. After its all too brief appearance we left the floor of Swaledale and climbed with the path to Kisdon Side. 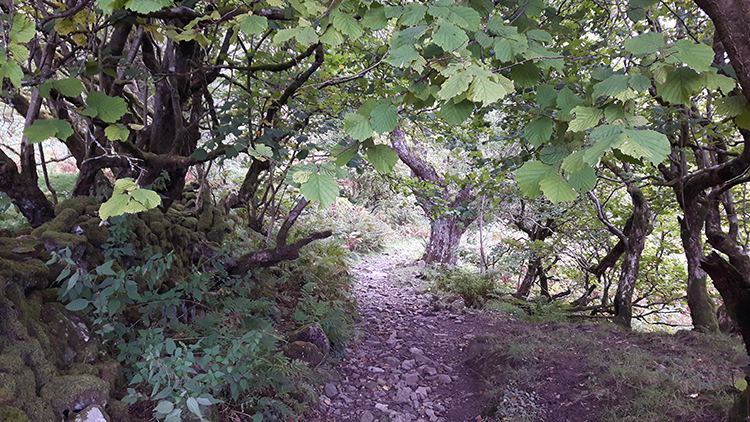 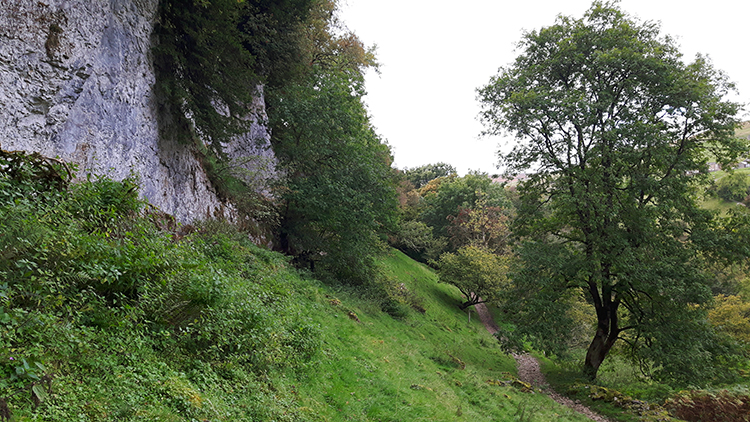 After climbing on a camber across a few small paddock fields on Kisdon Side we entered the most gorgeous woodland. Most of the trees were old and gnarled. How they appeared to twist and turn, sometimes weaving between, in and out of their own branches fascinated me. The woodland certainly beguiled and the path conformed with the setting as it seemed to twist and turn its course as much as some of the trees. It took itself on a meandering course through the wood. Never too deviating though, just a series of short fairground waltzer curves. I left the path once, to climb up to the white chalky cliff of Kisdon Edge. It seems I got too close to the cliff wall without noticing for when I returned to path Dave told me I was covered in chalk. It took some brushing off. 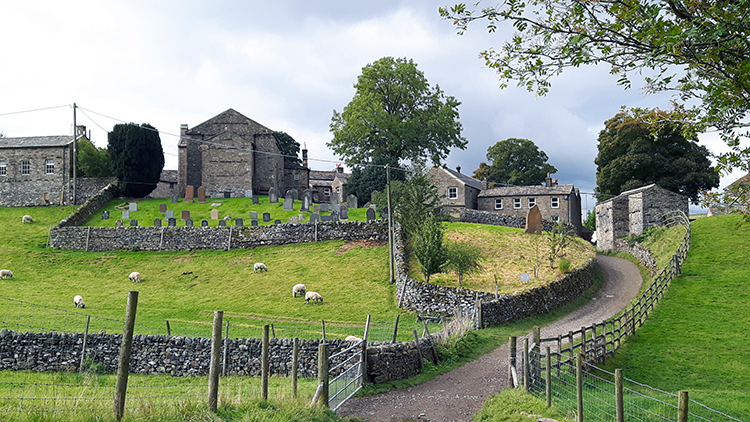 Walking back into Keld 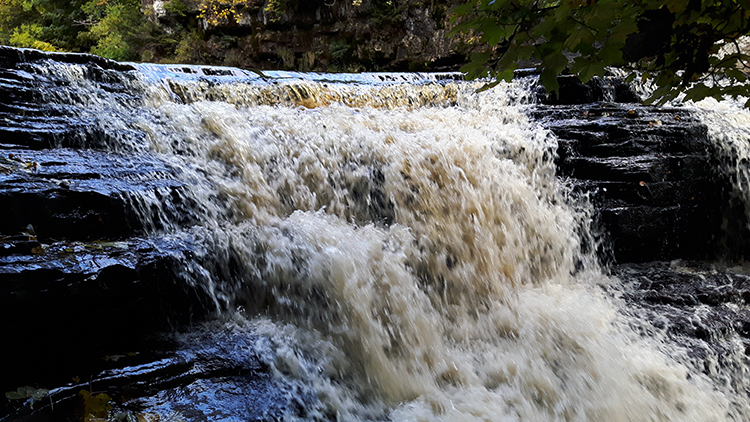 Soon enough we came out of the woodland and came back to the fork in paths we had been at earlier in the day when we had taken the path down to the footbridge to cross the Swale. We followed the path from where we had came back into Keld and then we all walked back to the car park. As Steve and Jan changed Dave and I walked down the track to Catrake Force. We got up close to the waterfall and enjoyed the scene for a while. Me for longer than Dave actually because when I walked back to the car park my friends were impatiently waiting for me. I simply could not tear myself away from the beauty of the scene.