The Complete Guide to the Lake District - The Best Waterfalls

Most people who visit the Lake District to walk in its beautiful surroundings think first about the mountains and the lakes but think beyond the obvious and there are many more beautiful natural wonders to be searched out and enjoyed. There are many stunning waterfalls in the Lake District, some well known and accessible for all visitors and others which have to be sought out as part of a fells walk. While understanding the challenge of defining all the waterfalls in the Lake District and indeed missing out some of particular merit I have chosen a personal twenty here including the waterfalls which feature in popular lists, are well known and most visited. However I have also included some less known waterfalls which demand a climb to reach them. The task of visiting all twenty should present you with some interesting new walks to reach them.

Note: Click the link on each grid reference point for a GPS (.gpx) file which indicates the location of the particular waterfall. 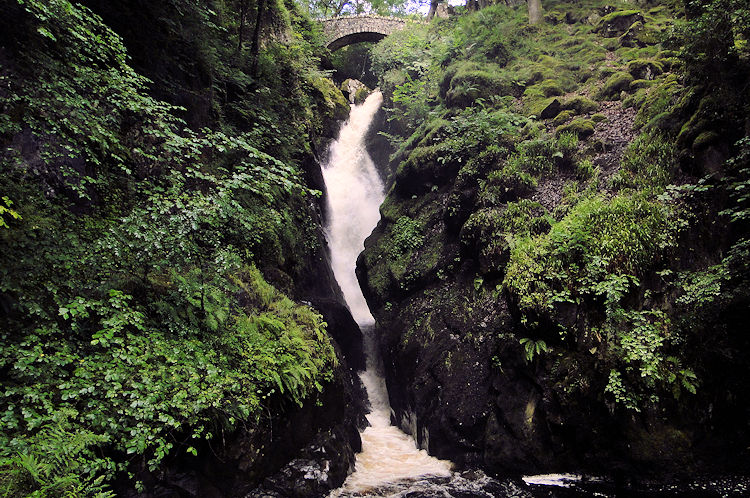 Aira Force is one of the most popular waterfalls to visit in the Lake District due to its accessibility from the road and its beguiling location which has inspired poets, writers and artists for centuries. The tumbling waterfall drops an impressive 65 feet and can be reached by an enchanting stroll through ancient woodland and landscaped glades. Finding a quite spot in the woodland within sight of the waterfall is the perfect place for a family picnic. Walk to Aira Force 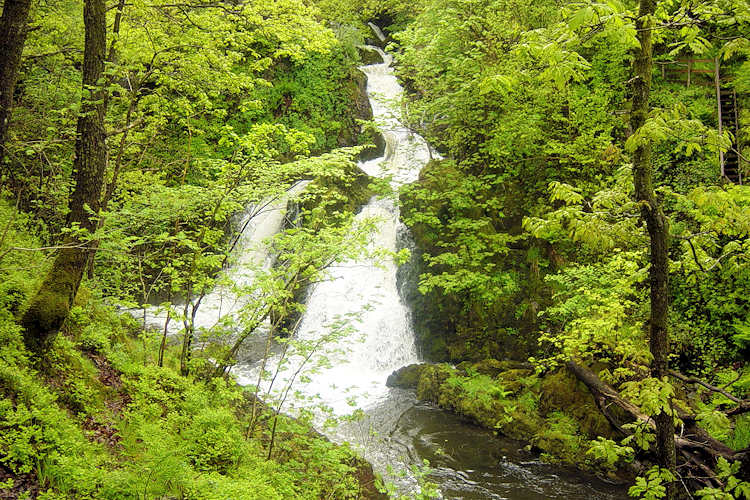 Colwith Force is one of the most accessible of the waterfalls in this list, being close to the Ambleside to Coniston Road, just off the spur to Little Langdale. The waterfall drops in several stages down a total height of about 40 feet with the final double spout being the most spectacular feature. It is set in beautiful woodland making it one of the most enchanting places I have ever been in Lakeland and a feature of a lovely lowland walk. Walk to Colwith Force 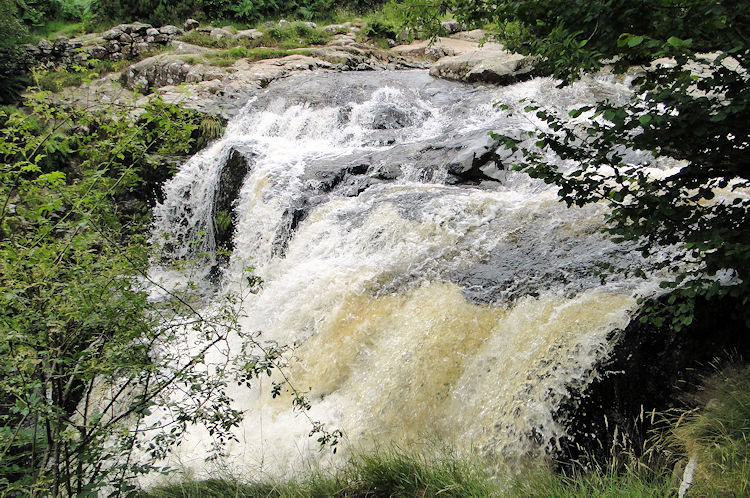 The waters of Aira Beck tumble over High Force before continuing downstream to tumble over the more well known waterfall of Aira Force. Situated in lush woodland on the west facing slopes of Gowbarrow Fell the site of High Force is an ideal spot for resting and taking in the natural surroundings in peace, especially if Aira Force is busy with the masses of people who can visit on the busier days of summer. Walk to High Force 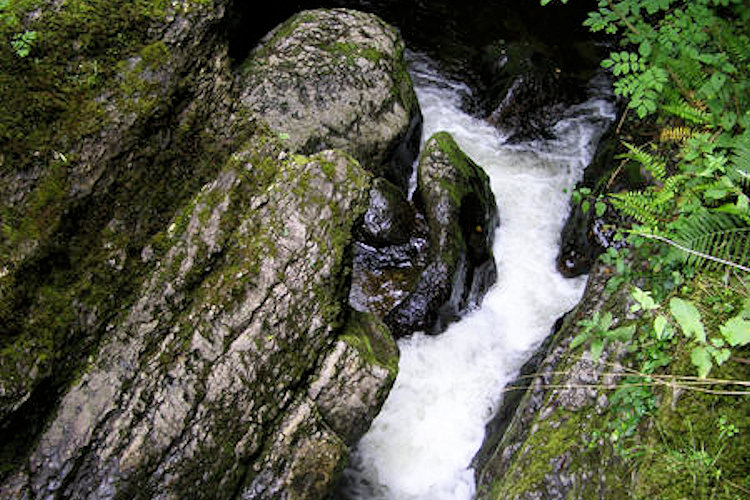 The Howk is a small and pretty waterfall set in a limestone gorge on the western outskirts of Caldbeck village. There is a popular short walk which follows Whelpo Beck up to the Howk in the limestone gorge which contains the waterfall and also the ruins of the old bobbin mill. The mill began production in 1857. Powered by what was claimed to be the second largest water wheel in the country the Howk Bobbin Mill was forced to close in 1924. (Image courtesy of Wikipedia) / Walk to the Howk 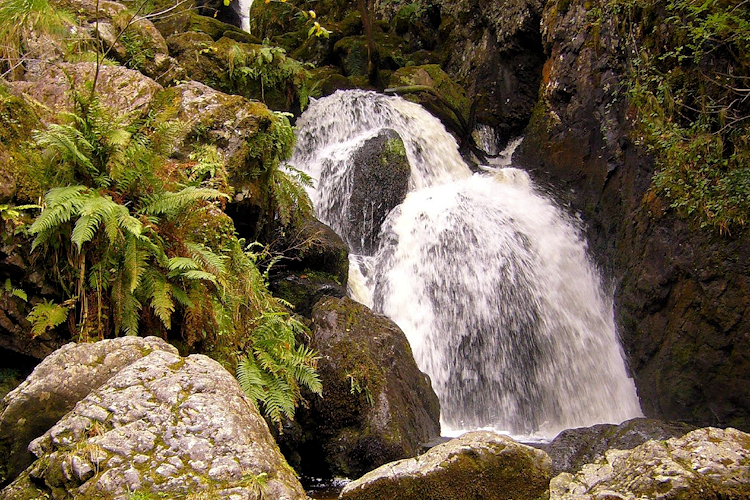 Situated in Watendlath Beck near the south end of Derwent Water visitors can get as close to the falls as they wish. For the intrepid take due care as the rocks at the base of the falls can be slippery. The reward for endeavour is a wonderful view of the falls, which are spectacular after a period of wet weather. The falls were made famous by poet Robert Southey, whose poem 'The Cataract at Lodore' is one of his most well known. (Image courtesy of Wikipedia) / Walk to Lodore Falls 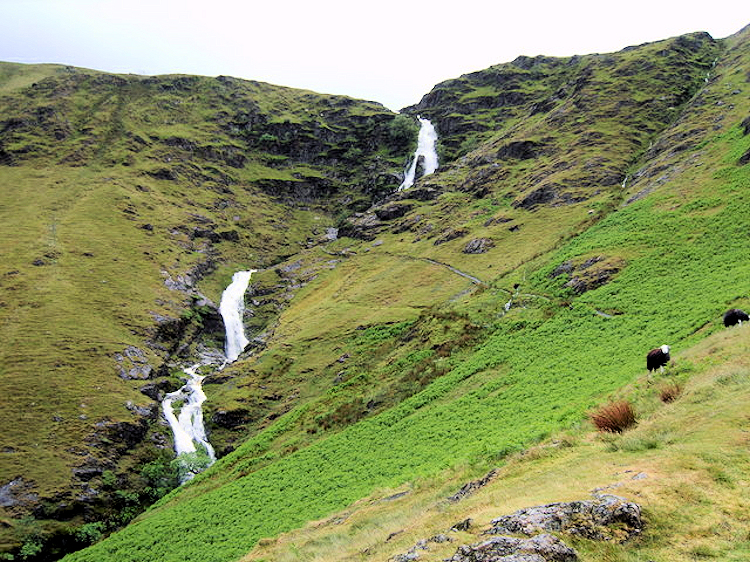 Moss Force is situated in the pass which connects the Newlands Valley to Buttermere and was admired by Samuel Taylor Coleridge who wrote "The remainder of the torrent is marked out by three great waterfalls – the lowermost apron-shaped, and though the rock down which it rushes is an inclined plane, it shoots off in such an independence of the rock as shews that its direction was given it by the force of the water from above". (Image courtesy of Wikipedia) / Walk to Moss Force 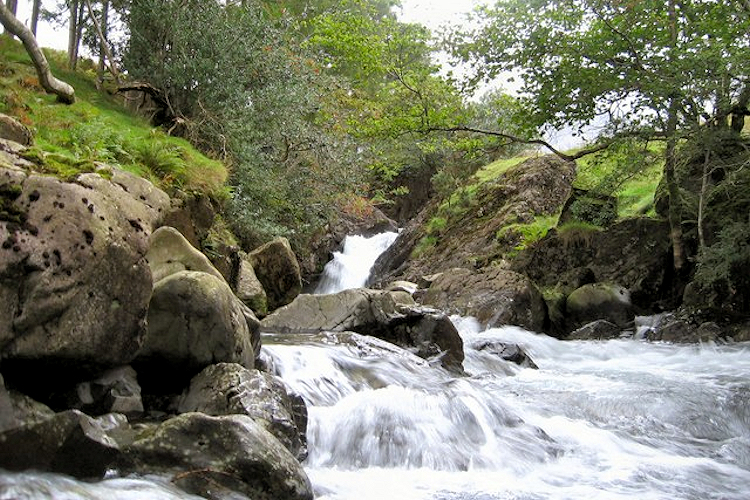 Ritsons Force is found a short way behind the Wasdale Head Inn. Go through the back of the beer garden and cross the stone bridge, follow the path up the field and through a gap in the stone wall up to a group of trees up the hill. When you reach the trees there is a wooden gate which leads you down to Ritsons Force waterfall. I first sought the waterfall out during my walk of the Mosedale Horseshoe. (Image courtesy of Wikipedia) / Walk to Ritsons Force 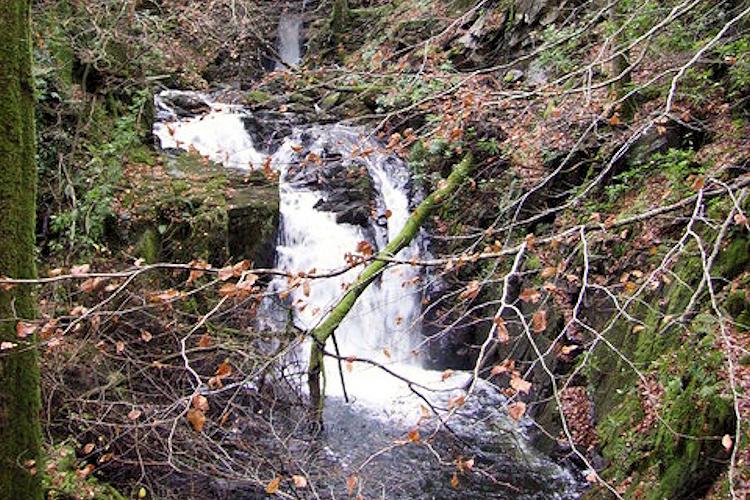 Walkers who complete the popular Fairfield Horseshoe do a complete round of Rydal Beck but never see it as they climb to the high ground to one side of the beck and after rounding Fairfield to the north of Rydal Head they descend from high ground to the other side of the watercourse. Rydal Falls is thus passed by to east and west. To reach the lovely falls walk north from Rydal Hall following the beck upstream for about 500 metres. (Image courtesy of Wikipedia) / Walk to Rydal Falls 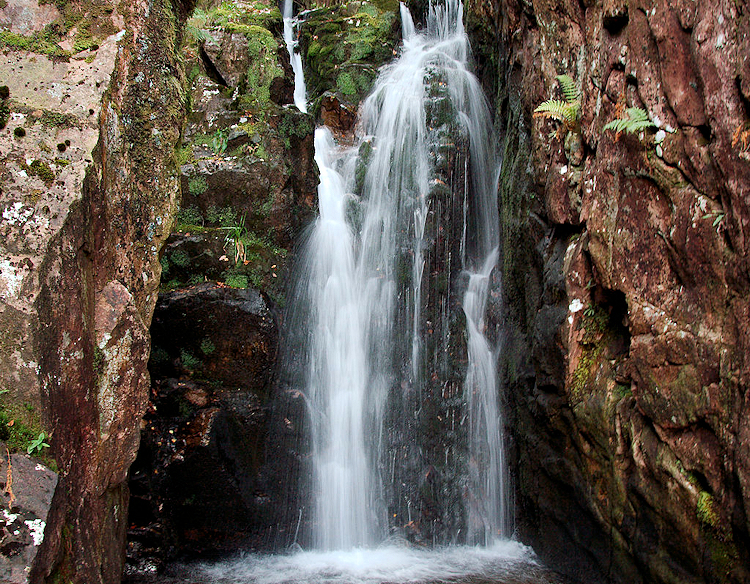 Scale Force with one drop of 120 feet and several smaller drops is hidden in a deep gorge on the northern flank of Red Pike, south of Crummock Water. William Wordsworth described Scale Force as "a fine chasm, with a lofty, though but slender, fall of water", while Samuel Taylor Coleridge wrote: "Scale Force, the white downfall of which glimmered through the trees, that hang before it like the bushy hair over a madman's eyes". (Image courtesy of Wikipedia) / Walk to Scale Force 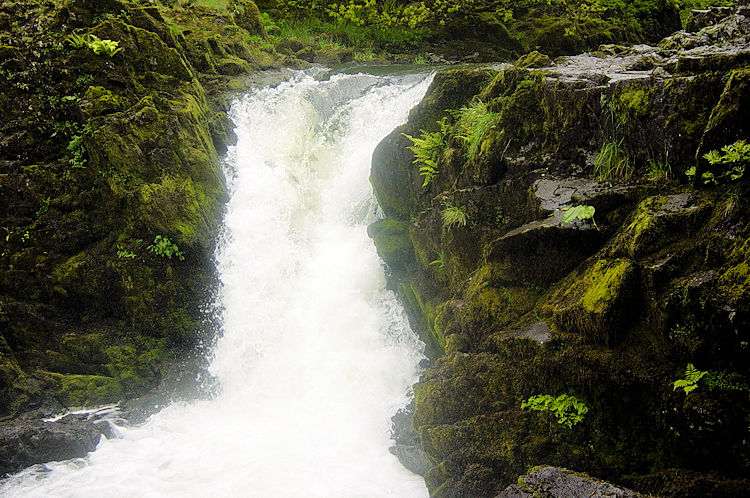 Situated near a slate works Skelwith Force is one of the smaller Lake District waterfalls and while it is one of the easiest to reach it remains relatively unknown. Do not be fooled into thinking small is insignificant though for Skelwith Force is a fifteen feet waterfall where the combined waters of the River Brathay and Langdale Beck thrust a dramatic passage through the rocks. When I visit the waterfall usually gives out an impressive roar. Walk to Skelwith Force 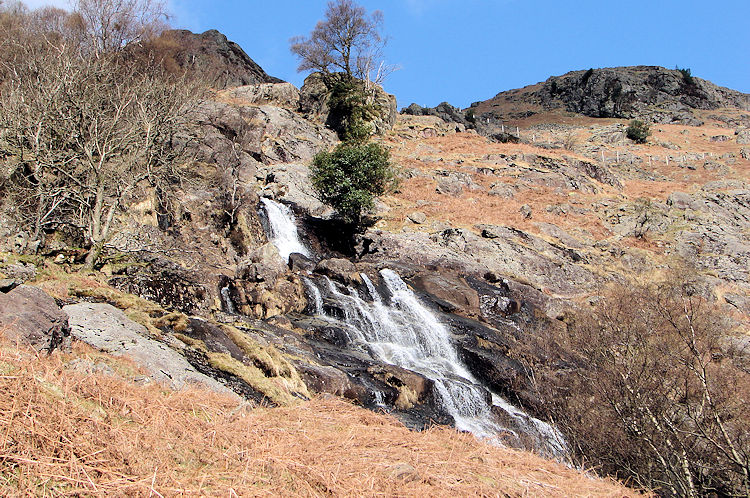 Many people are drawn to look at the cascading series of waterfalls of Sourmilk Gill even if they are not planning to walk in their direction. Sourmilk Gill is an attractive draw to anyone at Seathwaite Farm where most will be walking along Stockley Beck towards the Scafells rather than to ascend alongside Sourmilk Gill. Indeed I did the Scafells first time but the cascades beguiled me the next time I visited on a route I devised to Great Gable. Walk to Sourmilk Gill Waterfall 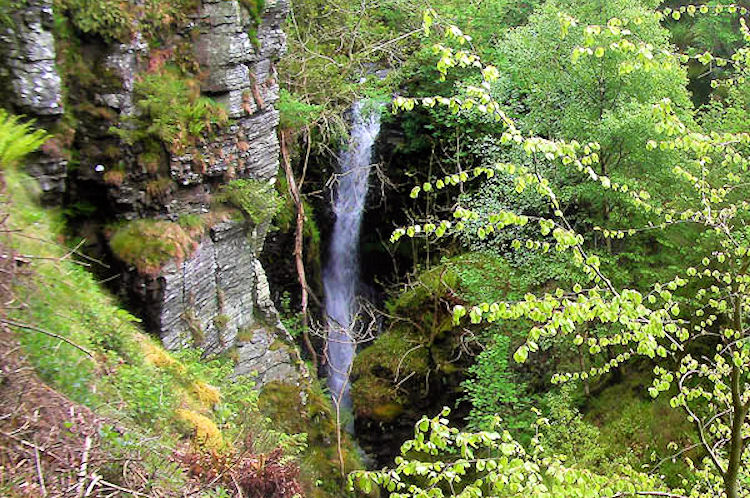 Spout Force is one of the lesser falls in the National Park in terms of height and is located in managed forest just west of the Whinlatter Pass. The falls are reached via a path through the forest and there is a viewing platform from the far side of the falls. Despite its relative lack of height in spring the volume of water coming down Spout Force can be very impressive. For the best views, come when the trees near the waterfall are not in leaf. (Image courtesy of Wikipedia) / Walk to Spout Force 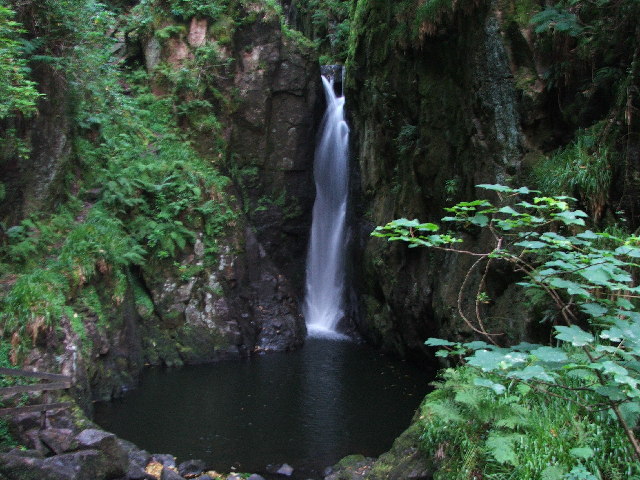 Stanley Force is found in Eskdale close to Beckfoot and Boot. Set in a ravine the waterfall features a series of drops, the longest single drop being 60 feet into a deep pool. The waterfall range is a total drop of approximately 150 feet. The ravine is densely planted with ferns which benefit from the moist water vapour thrown out by the waterfalls and with Rhododendron bushes clinging to the rocks and slopes. (Image courtesy of Wikipedia) / Walk to Stanley Force 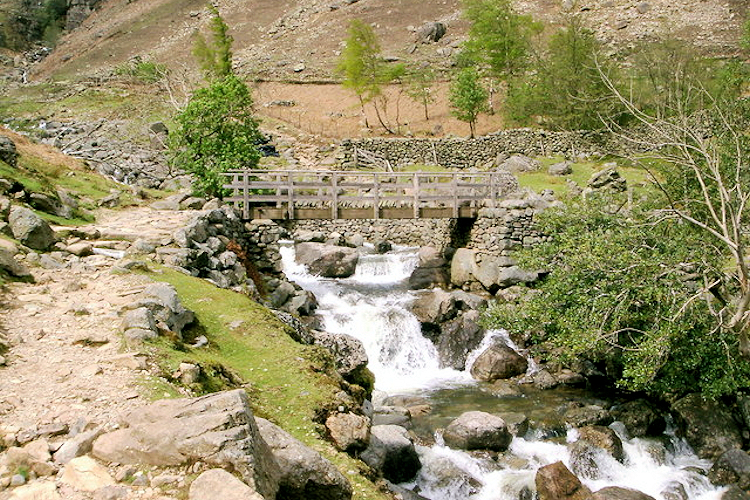 There are a number of impressive waterfalls each a short distance from each other and all easily reached from the National Trust car park at Dungeon Ghyll in Great Langdale. They can be found in Stickle Ghyll and Dungeon Ghyll which make their separate ways into Great Langdale Beck. The one pictured is on the way to Pavey Ark. The mosty notable of them and most famous is in Dungeon Ghyll which was written about by Wordsworth in his poem 'The Idle Shepherd Boys'. (Image courtesy of Wikipedia) / Walk to Stickle Ghyll 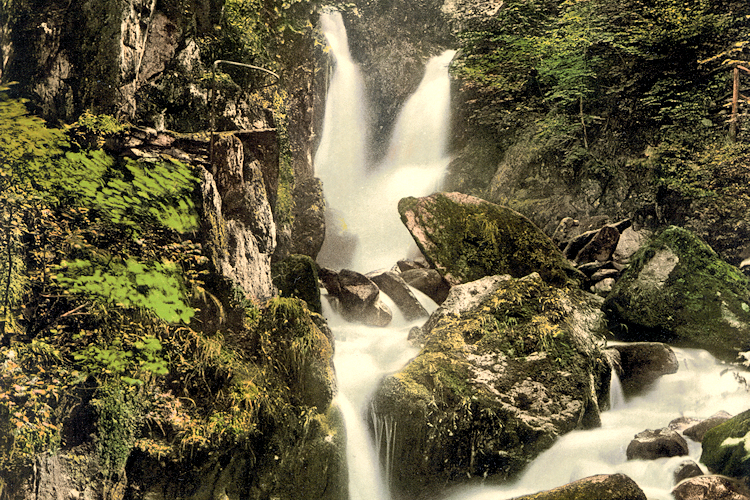 A short walk from the centre of Ambleside, behind the Salutation Hotel, leads to Stock Ghyll Force, a spectacular 70 foot drop waterfall which may be viewed safely from a railed viewpoint. In spring the area under the trees is a carpet of daffodils and at this time the viewpoint can become crowded. For a little more effort an even better view can be enjoyed by descending to the base of the falls and crossing over the beck to the far side. (Image courtesy of Wikipedia) / Walk to Stock Ghyll Force 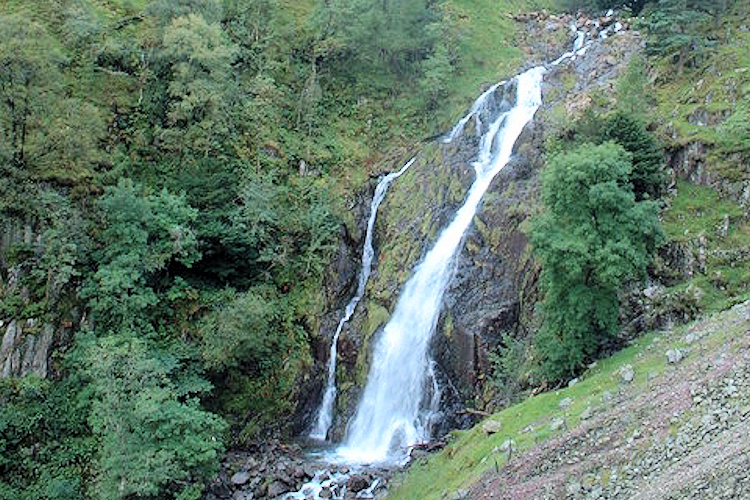 Taylor Force is one of the highest waterfalls in the Lake District and one of the most enigmatic as it is often given just a glance by walkers fixed on a long day out by walking on the popular route from Seathwaite to Scafell Pike. Taylor Gill Force is a beautiful waterfall with the long gushing plume of water tumbling down Seathwaite Gill on an impressive 140 feet drop towards Styhead Gill. Set in a scene of pine trees on hillside it is a sight to behold. (Image courtesy of Wikipedia) / Walk to Taylor Force 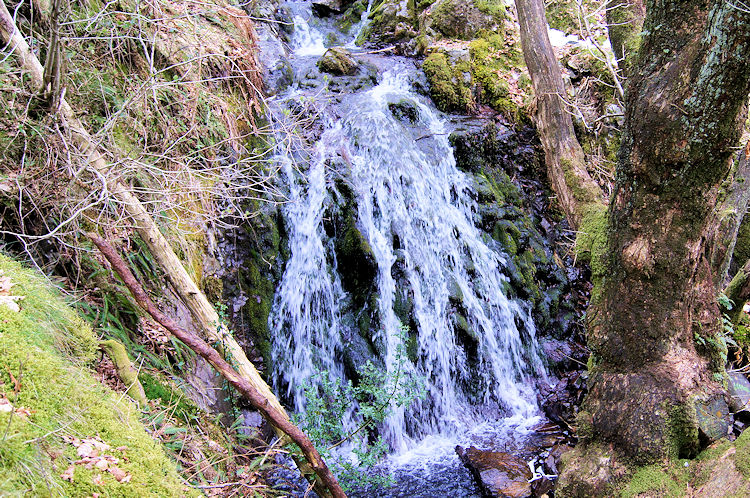 Tarn Hows is fed at its northern end by a series of valley and basin mires and is drained by Tom Gill which cascades down over several small waterfalls to Glen Mary Bridge. It is a lovely walk following the gill and its series of delightful waterfalls down from Tarn Hows to the car park which had been renamed by John Ruskin who felt that Tom Gill required a more picturesque name and so gave the area the title 'Glen Mary'. Walk to Tom Gill Waterfalls 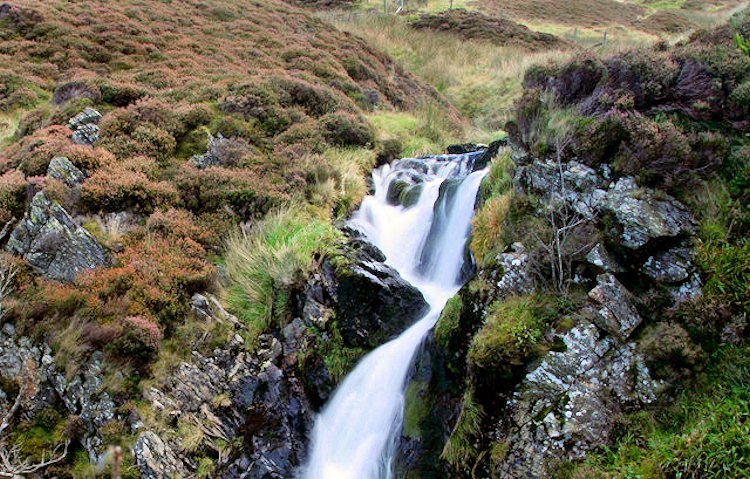 Whitewater Dash is highly rated as one of the finest waterfalls in the Lake District. The waterfall is found in Dash Beck as it descends rapidly in a series of cascades from its source in the quagmire of Candleseaves Bog on the north facing slopes of the upland valley between Bakestall and Great Calva. Due to the remote location a walk to Whitewater Dash is likely to be a quite one and you will be unlucky not to have the waterfall to yourself. (Image courtesy of Wikipedia) / Walk to Whitewater Dash 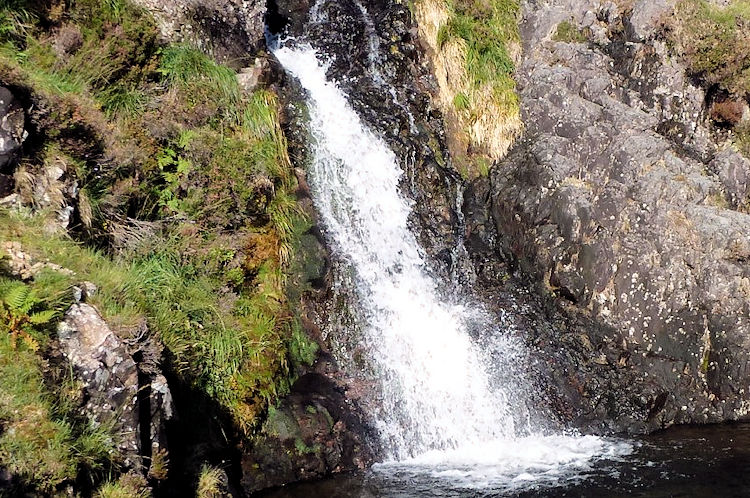 I found Whorneyside Force at the last moment, looking at my map as I ascended on a climb from Oxendale to Crinkle Crags. The waterfall is situated on Whorneyside Fell and is the most dramatic feature of Hell Gill Beck as it flows down from the foothills of Bowfell and Crinkle Crags into Oxendale Beck. The waterfall drops about twelve metres into a deep bowl shaped pool which is a good spot to rest besides on a long day in the mountains. Walk to Whorneyside Force