A personal record of my walk of the Rhine Castles Trail (Rheinburgenweg) with a written journal and with photographs. Tracklogs for GPS units and for use with Google Earth are available for download for each stage.

Stage One - Rolandsbogen to Remagen

Note: Routes shown on the maps and on the download files are recommended and which we stuck to as best as we could. However, there are diversions we made which were necessary on our journey because of accommodation and because of some planned and unplanned digressions. Please contact me if you need any clarifications.

The Walk: I had wanted to do a long distance walk outside of the UK for some time and in the winter of 2021-2022 I started looking into long distance trails in Continental Europe. Having considered a few, such as the popular Tour of Mont Blanc and Camino De Santiago, I felt I needed something a little quieter than the busy ones such as these two classic European hikes. I also had to consider a route which my wife Lil could cope with, because having never done a long distance walk before, she was keen to join me on my first European one. After looking at all media sources on the subject I happened upon the Rheinburgenweg, translated in English as 'Rhine Castles Trail'. At a distance of 195 kilometres, or 122 miles, with no serious mountain climbs, the route was perfect. And with the promise of castles, medieval towns and villages, luscious forest trails and riverside walking, it was ideal. We agreed on the walk and I made the plan. I booked all flights and accommodation in January 2022. Six months later we arrived in Rolandsbogen to start our walk. 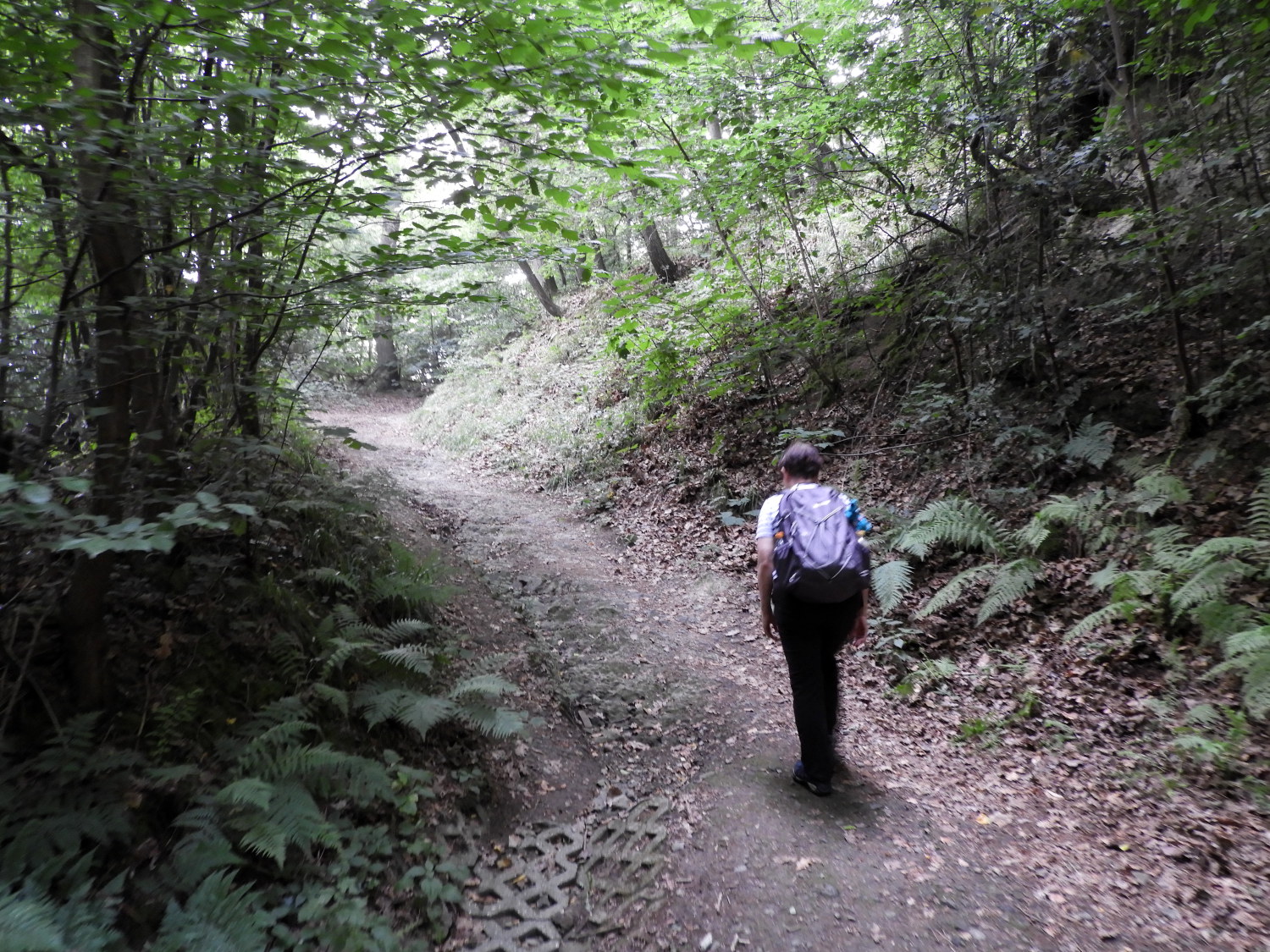 On the climb from Rolandswerth 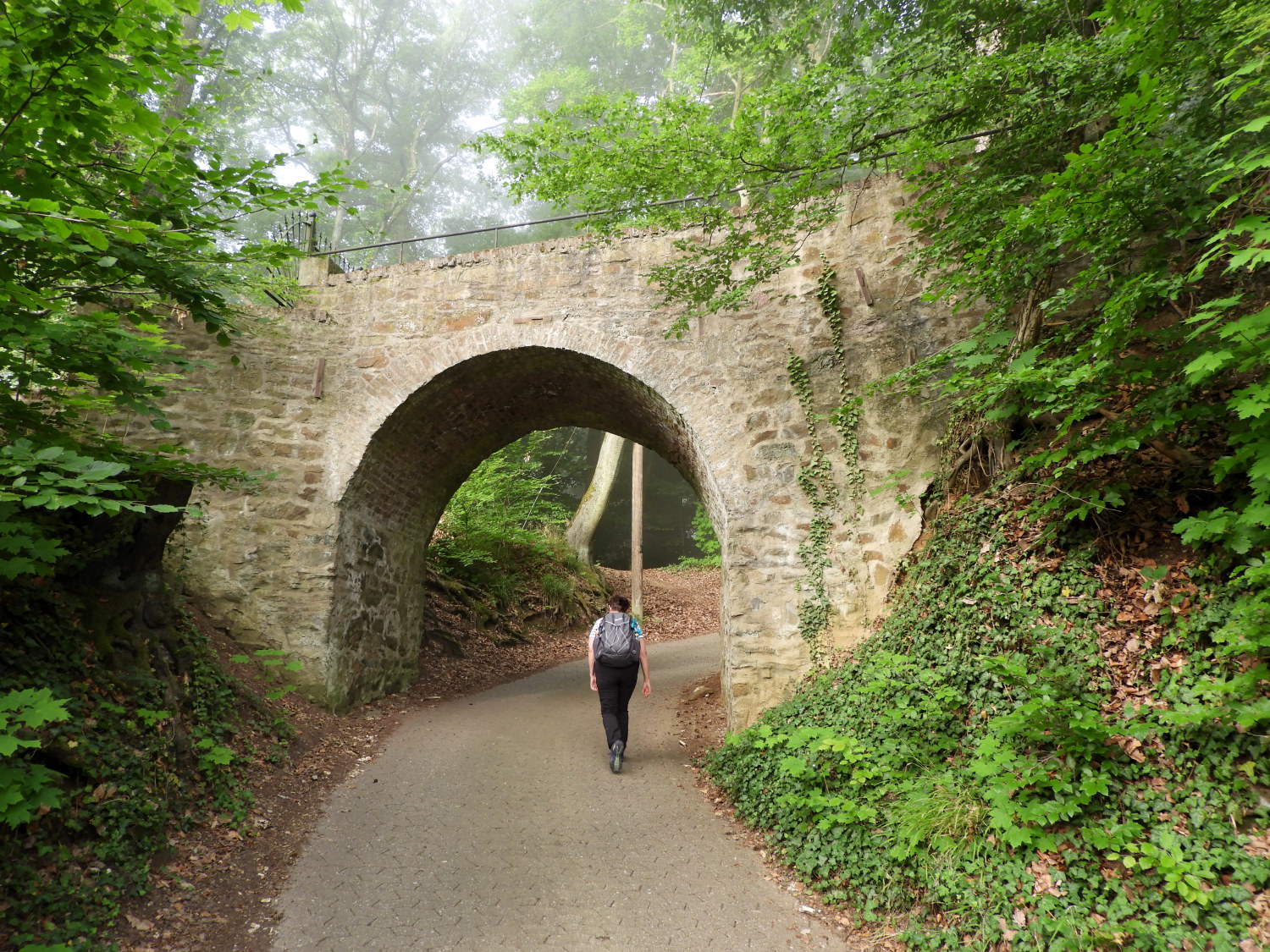 Lil and I set off from our accommodation in Rolandswerth to start our walk at 7.30am. It was a warm misty morning in the Rhine valley which we appreciated as, after crossing the main south side Rhine valley road and reaching th 1900 Wasserwerk Rolandswerth building, we began a steep climb to reach the official start point of the Rheinburgenweg at Rolandsbogen. It was a relentless 140 metre climb, not part of the official route shown in the statistics here. So please add it on; anyone doing the walk will need to get up to the official start from the valley floor anyway. And the climb was very interesting, much of the path set in a deep holloway leading us upwards through the woodland. 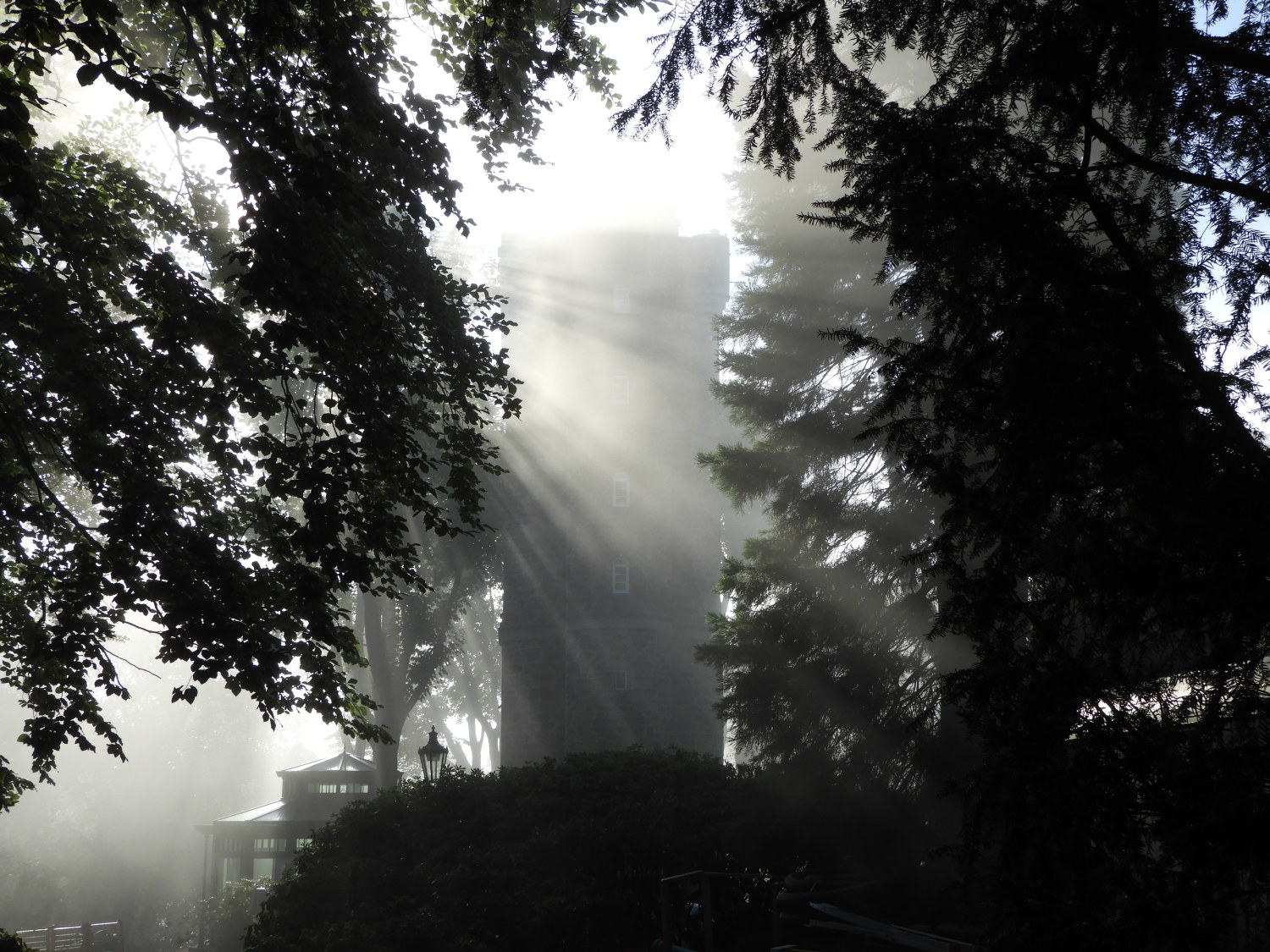 Sun breaking through at Rolandsbogen 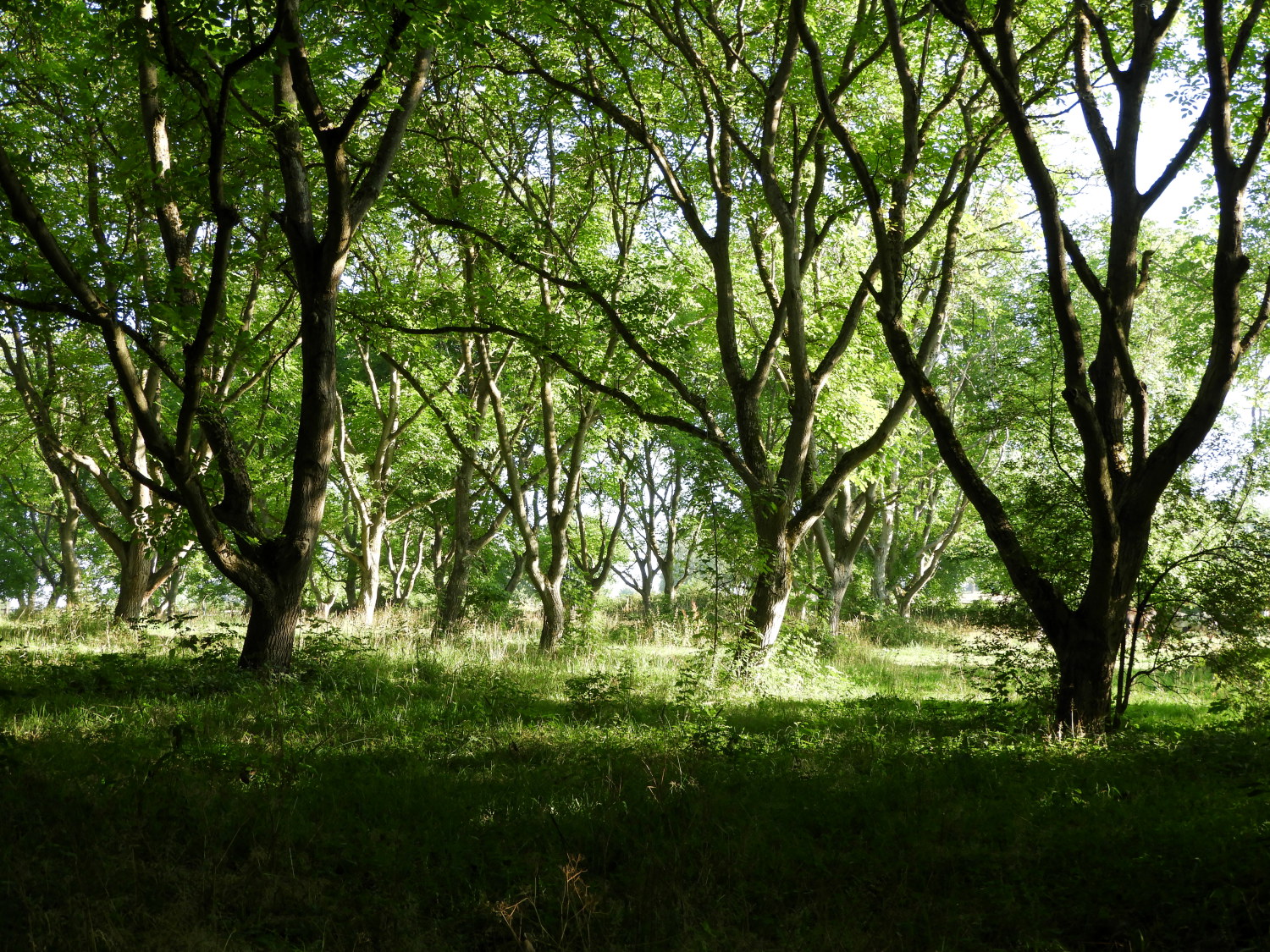 After hauling ourselves up from the Rhine valley we reached the official start point of the Rhine Castles Trail at Rolandsbogen. Almost spiritually, if you believe that kind of thing, the sun pierced through the breaking cloud and mist, shining its spotlight on us at the designated start of our Rheinburgenweg walk. Almost instantly a blanket of blue sky spread out overhead. It was a gorgeous moment to begin our two week long walk from Rolandbogen to Bingen. Lil and I both beamed a smile and set off in high spirits. And within a few metres of walking from Rolandsbogen we came to our first nature moment of the walk when a Buzzard flew from a tree we were passing to perch on top of a telegraph post about, in the bird's opinion, a safe 50 metres or so away. 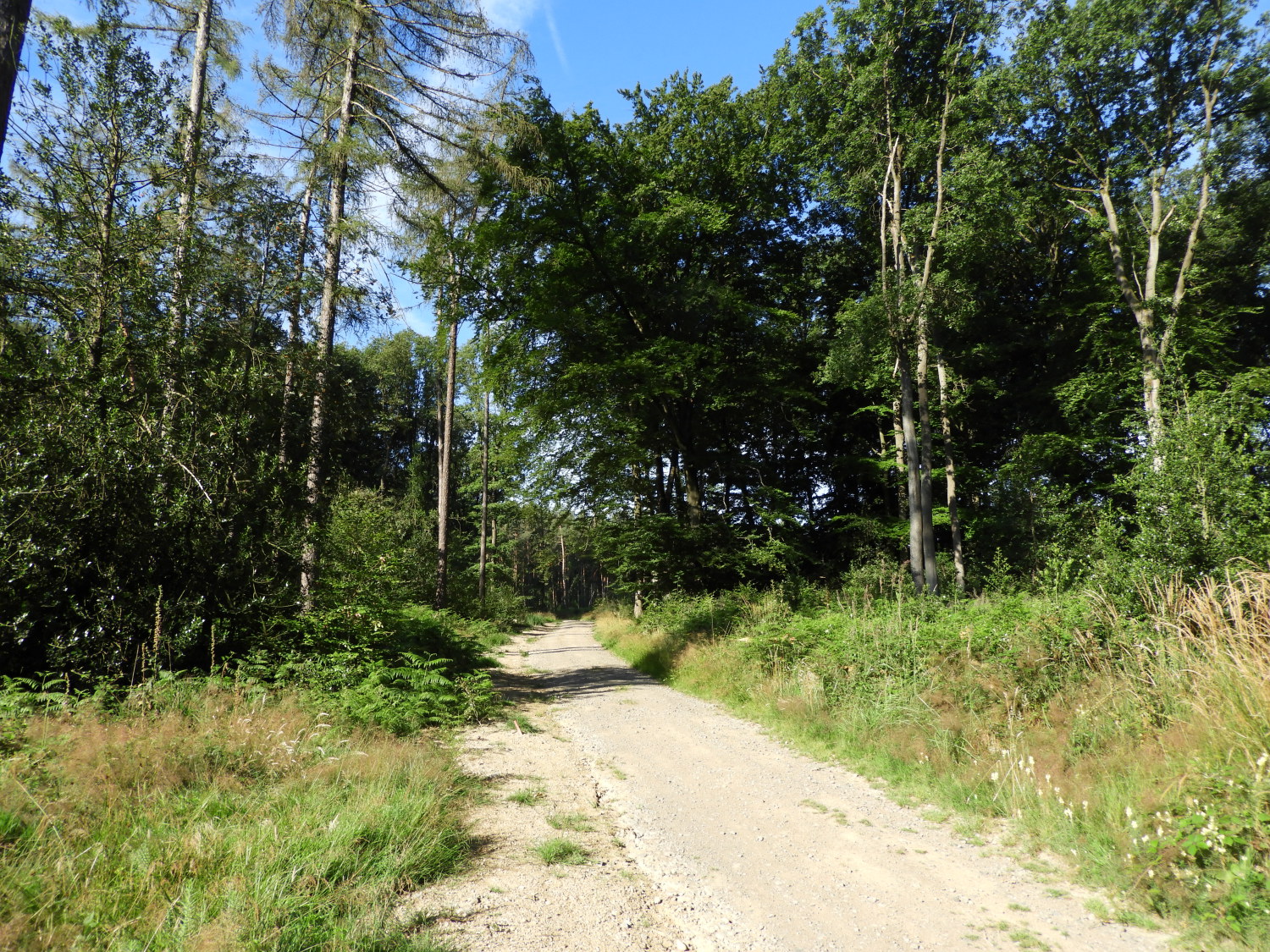 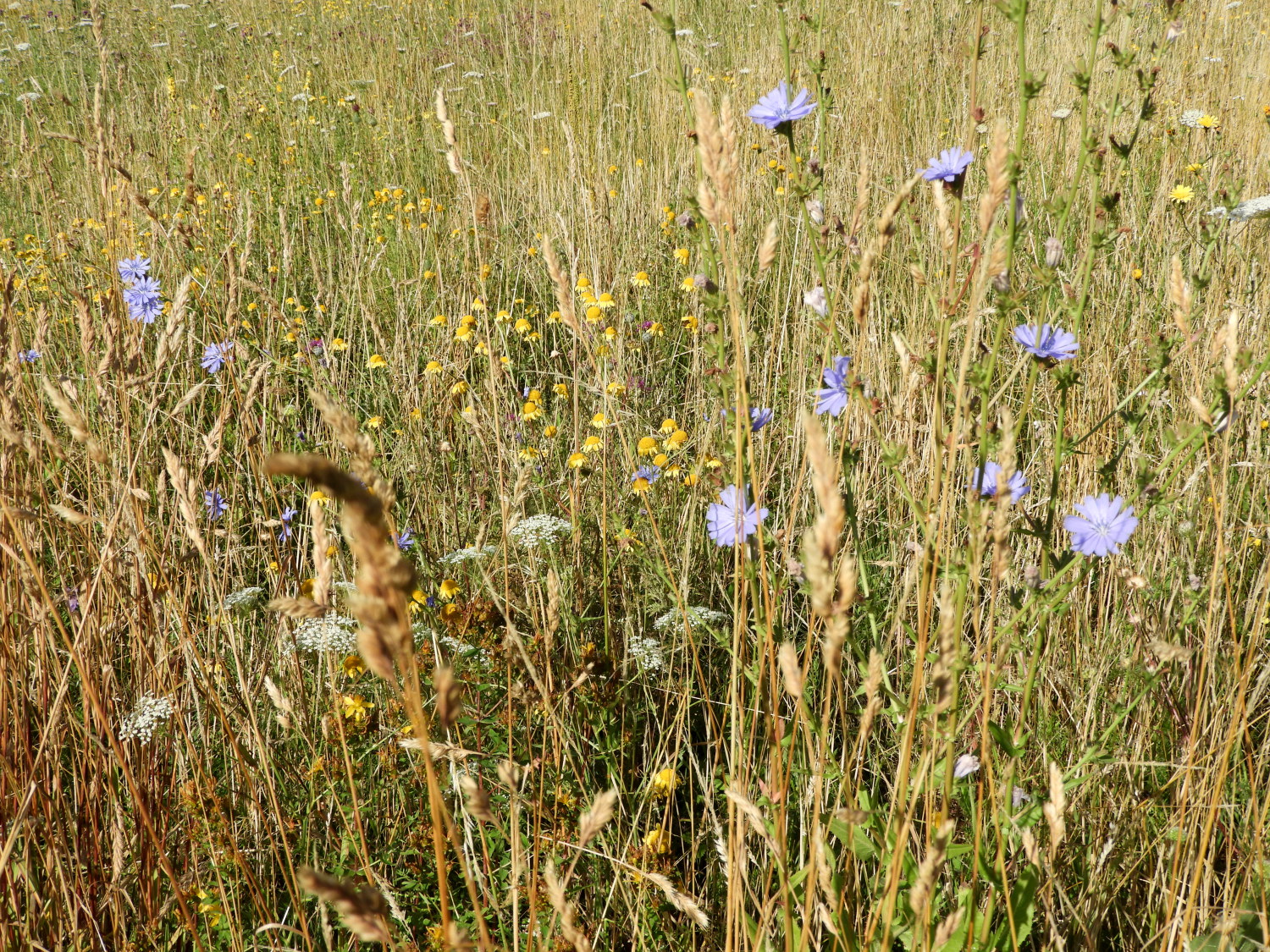 Walking through the Rhine Castles Trail's first stretch of woodland was a thorough delight. The majority of trees were still displaying the illuminating lime green colour of springtime. And the spectral colour was further highlighted by the rays of sunshine which was strengthening all the time. It was the 12th July after all, just a few weeks after midsummer's day. We had planned for it to be warm. We were warned that at some stage of the walk it would get extremely hot with a European heatwave on the way. More on that when the time comes. For now we enjoyed the glinting sun rays and cover provided from the woodland to the west of Rolandseck and Oberwinter which we were walking through in a southerly direction towards the town of Bandorf. Soon though, the woodland gave way to open ground, and we then basked in the lovely conditions. Sunny, calm and rising into the mid twenties Celsius. And it was not yet 9.30am in the morning as we enjoyed the spectacle of wild flowers and insects buzzing around them in the wild meadow which we were now passing through. 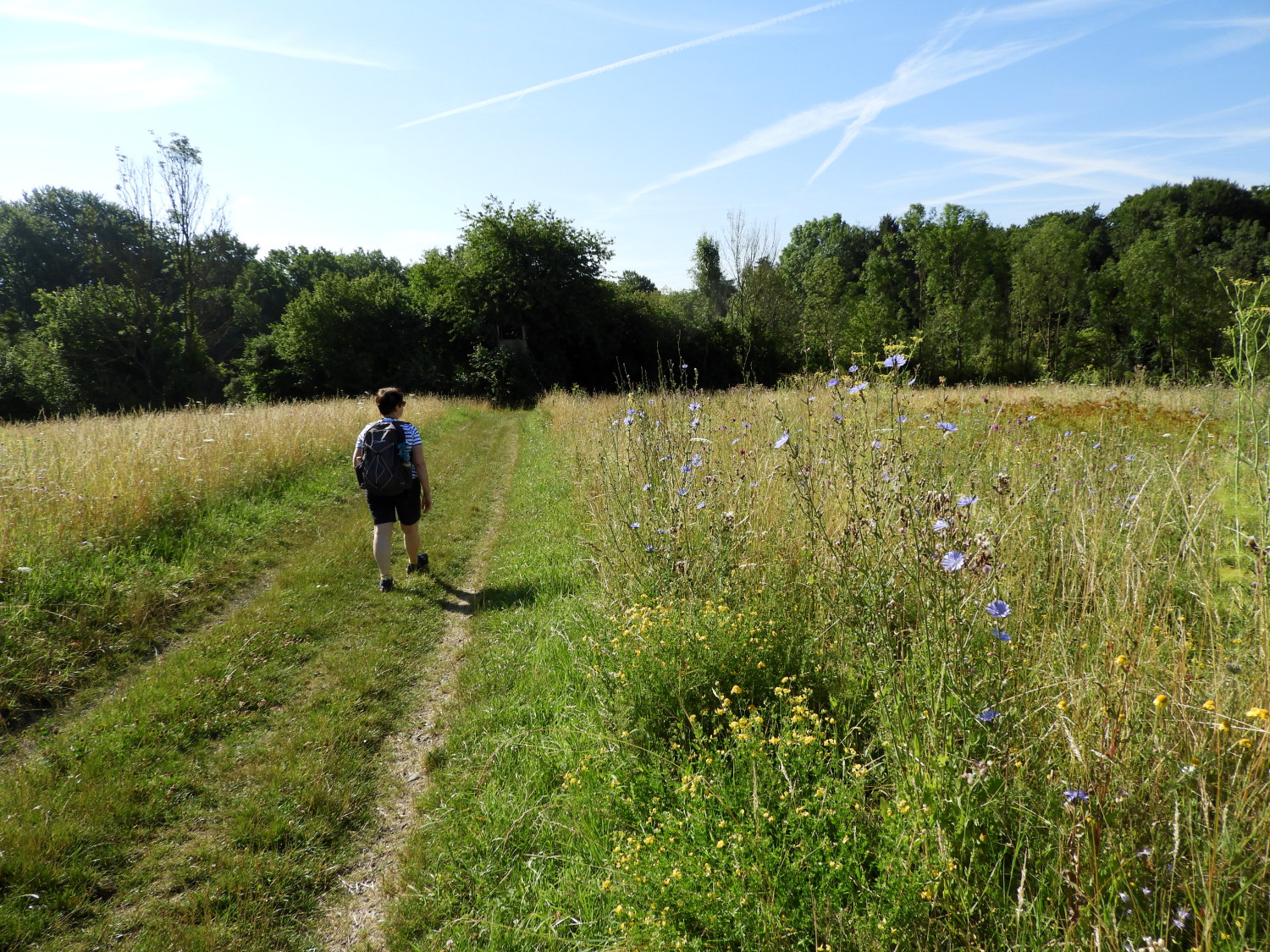 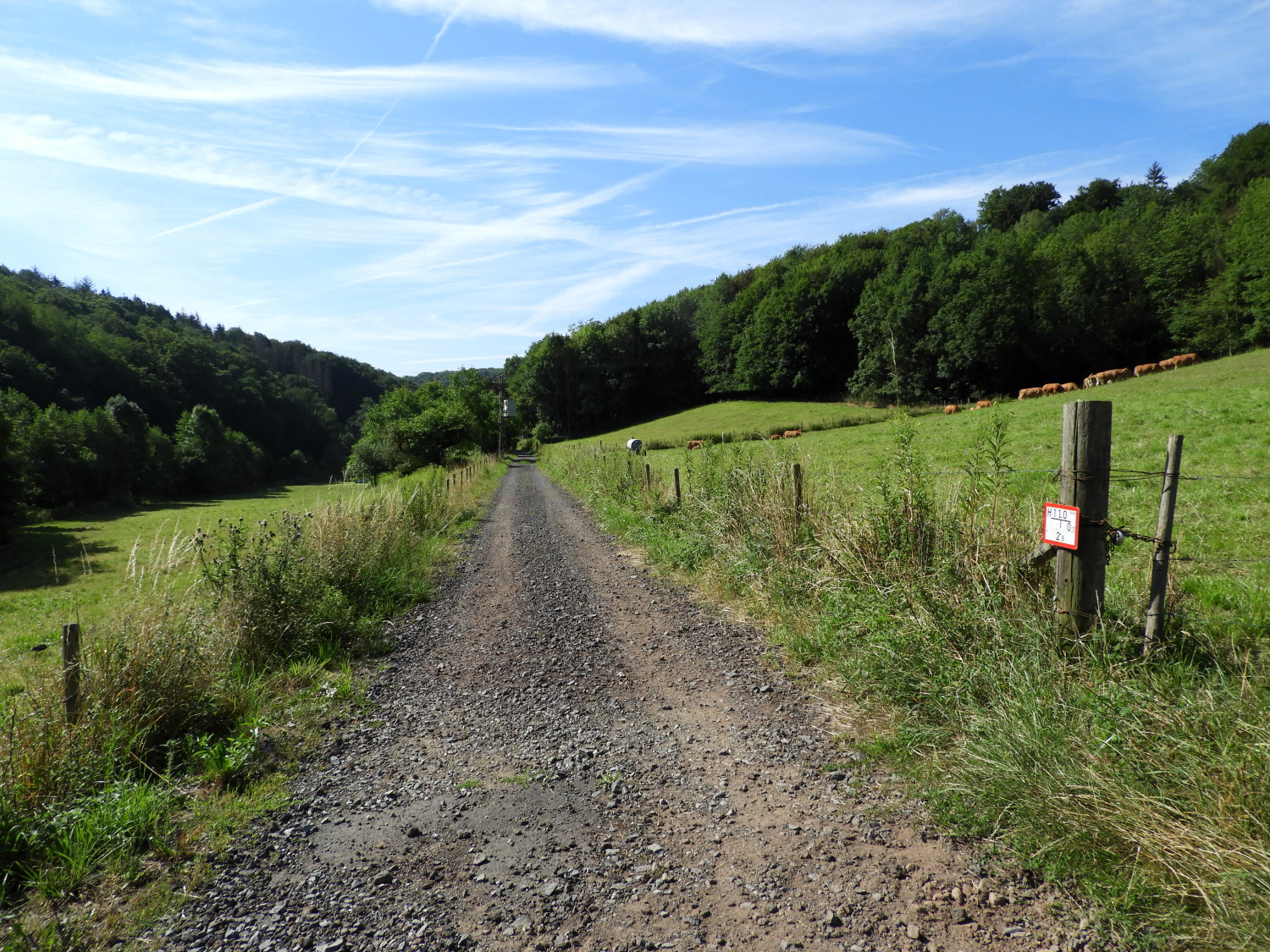 The meadowland led us to the outskirts of Bandorf which first became evident as the path led us around an all weather sports field. From there we climbed to walk along a lane at the rear of Eifelweg Straße. Then it was into the streets proper where we came across our first example of German roadworks. Plain and simple, no health and safety overkill with unnecessary signs, barriers and road closures here. It was to be this way during further street-works we came across on the Rheinburgenweg. Which was very uplifting. Anyway, past the splendid roadworks with splendidly polite workers we went and safely to the other side of Bandorf which we departed by climbing a farm access lane towards Unkelbach. 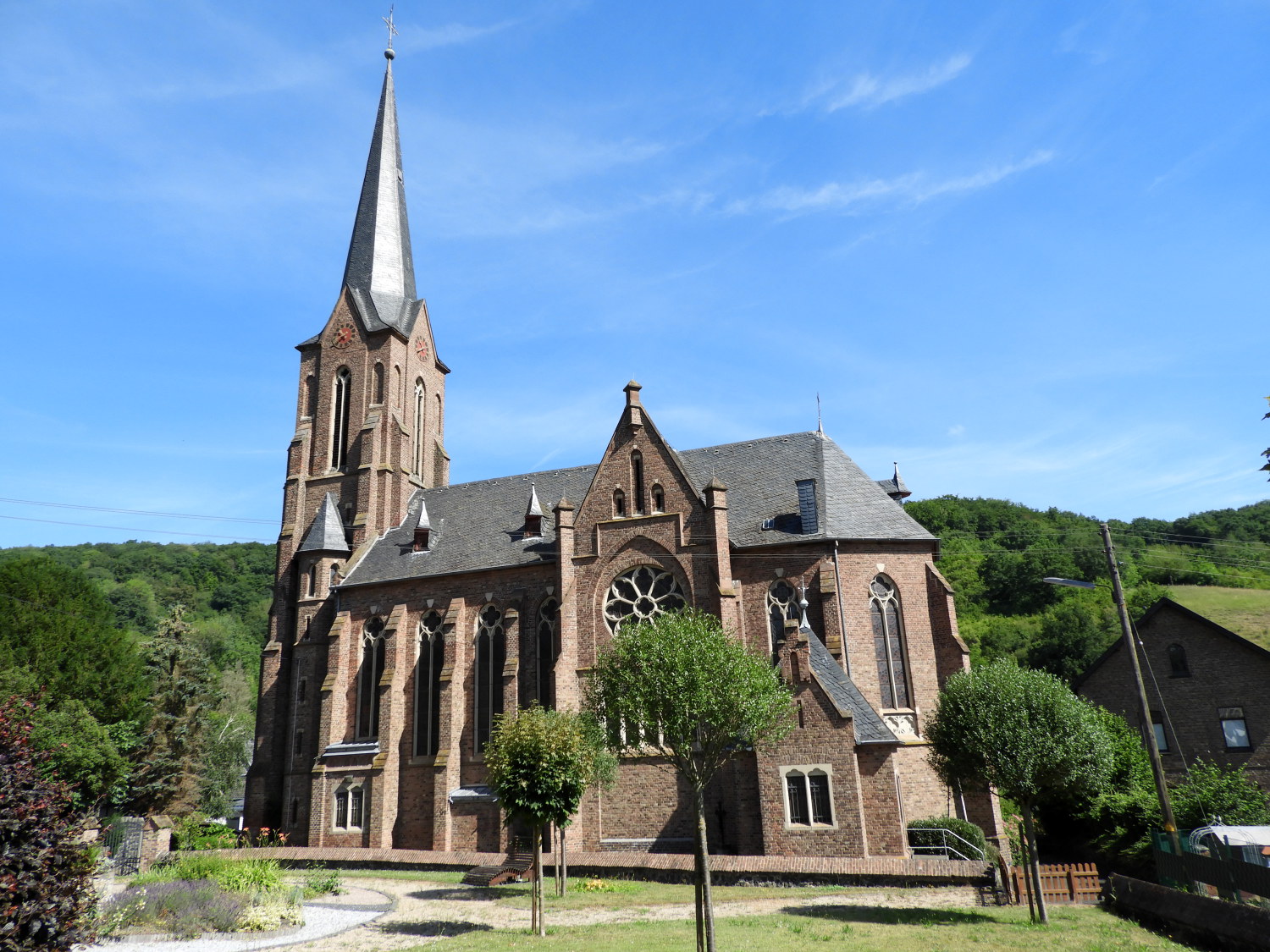 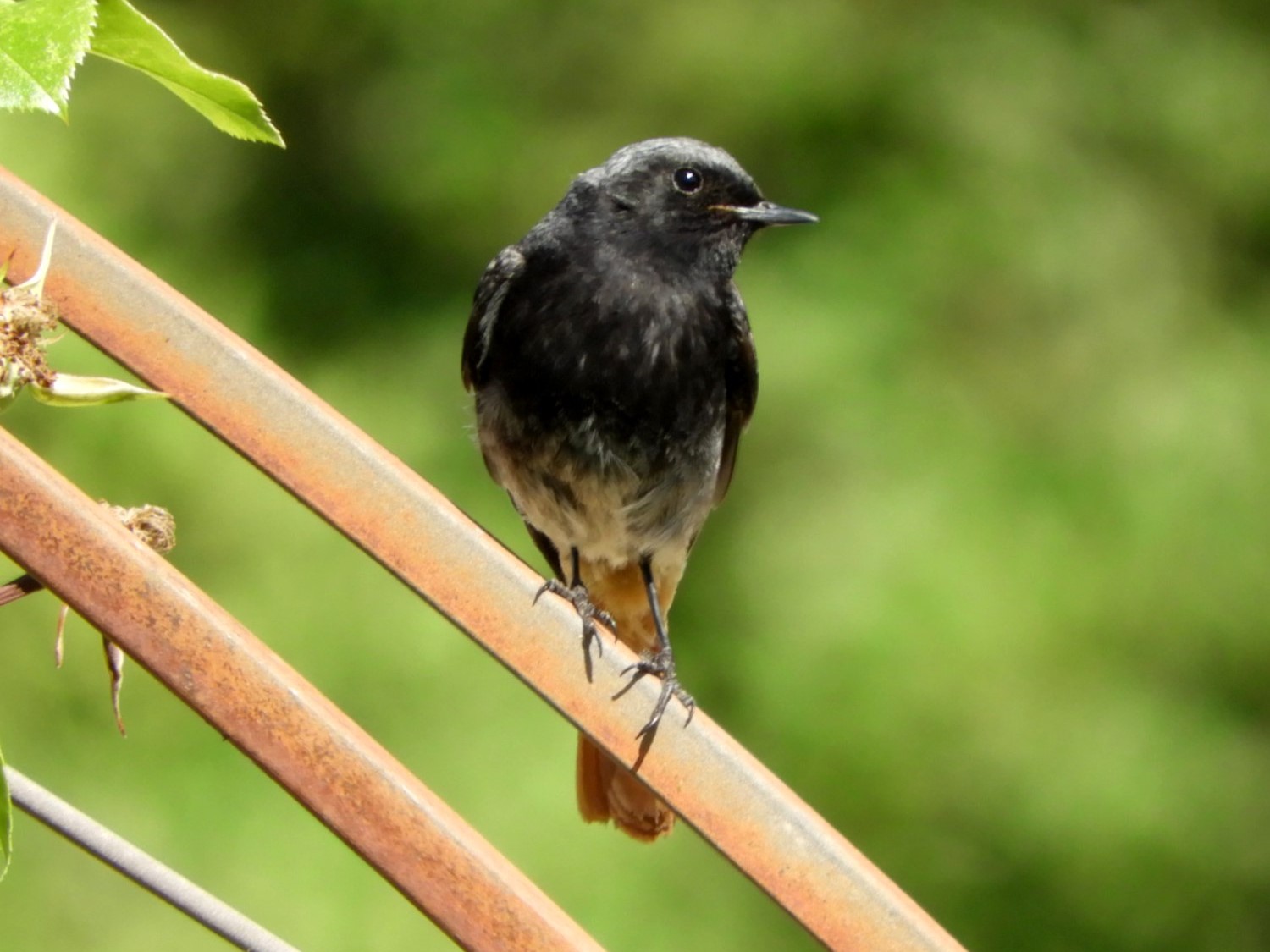 "Ich spreche ein bisschen Deutsch". I said to myself as we headed towards Unkelbach, practicing what I had learned in the 100 or so days of learning basic German prior to the trip out here. Lil had been learning too, she having an advantage of learning simple German as a child for summer holiday trips to family in Northern Germany. We had both very much wanted to make an effort speaking in the German language while here. Friends and acquaintances had said we would not need to because everyone in the Rhineland would speak good English. Still, I wanted to make the effort and Lil agreed. And here is why I am glad we did. Arriving in the lovely village of Unkelbach we fancied going to a cafe if there was one and if not at least find a shop. We had only had a drink and small bite for breakfast in our self-catering accommodation in Rolandswerth and were now hungry. Searching around the village.. no cafe. We asked a local walking with a shopping bag. "Gibt es ein Café in der Nähe?". Nein, was the reply. "Gibt es einen Supermarkt?". My pronunciation and dialect will not have helped but thankfully the friendly face looking at me must have worked it out and pointed the way to the village shop. "Danke" I said, really chuffed with myself. The effort took its toll though. Once in the shop Lil had to take over, me now totally befuddled at what to ask for! Which was just as well, the local person outside and the shop staff within this little village shop spoke no English, We had done well. With food, drink and proud of our accomplishment we found our way to a picnic area near the impressive village church to enjoy our refreshments. While we did so a bird with a striking long orange tail flew around us and into a bush. Then coming out to perform another flypast and then back in again. Repeating it a few times. Not knowing what it was at the time we later discovered it to be a Black Redstart. 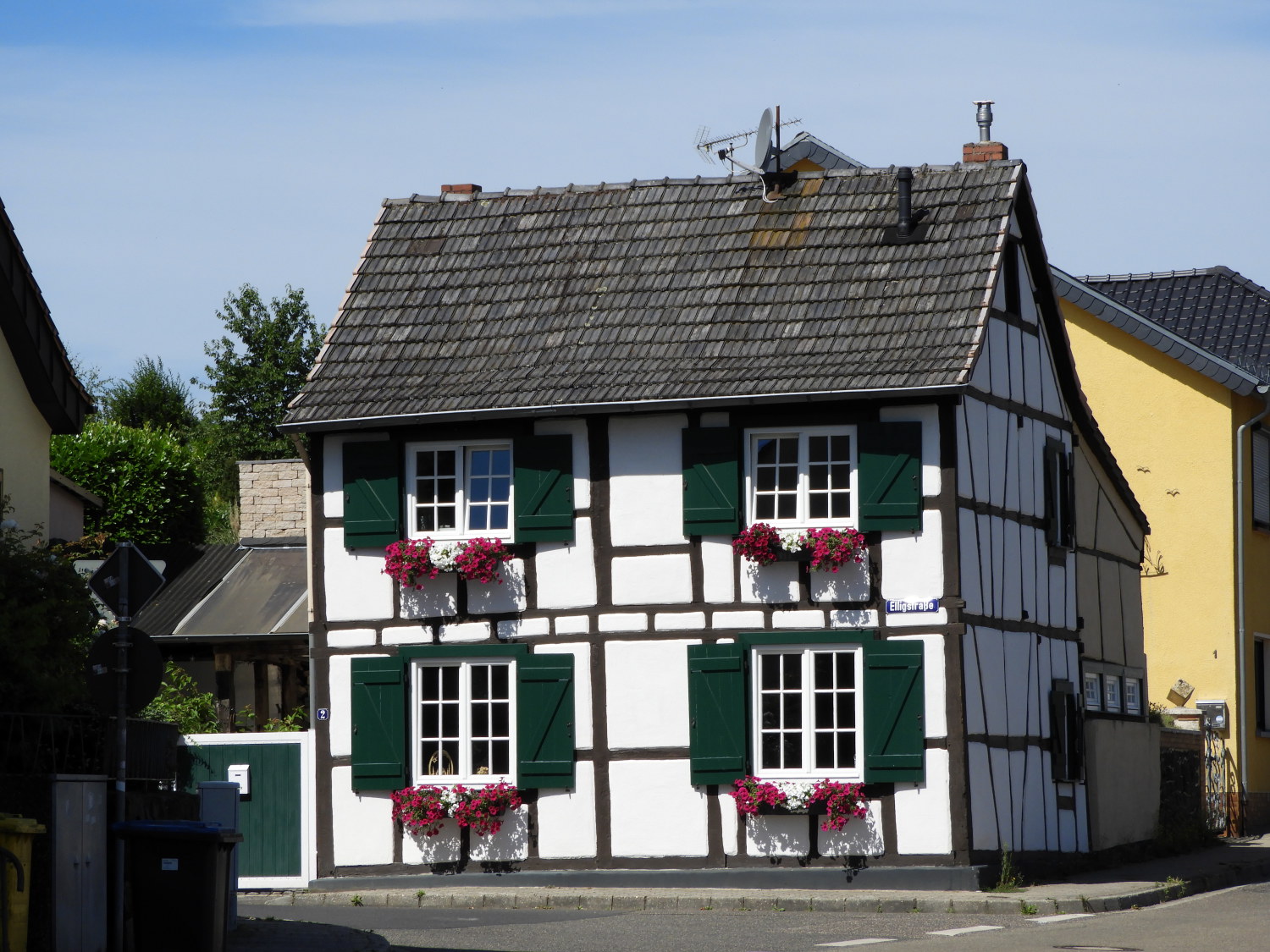 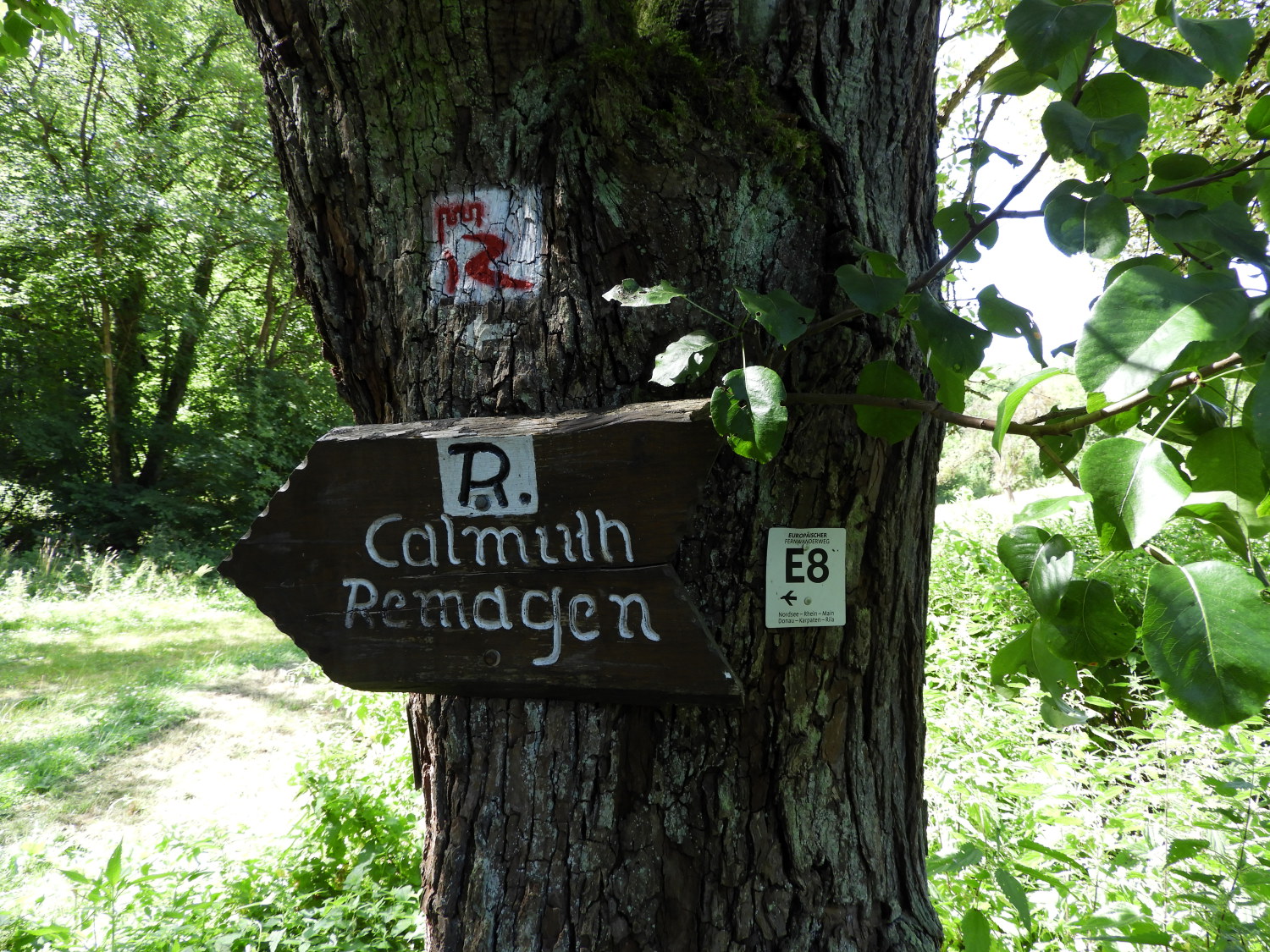 The way to Remagen

After enjoying our refreshments we set off on our way from Unkelbach, first by making another climb, the second of three this first day. While the first had been making it to the official start of the walk in the first place, this second one, a 100 metre climb from Unkelbach to Sahlbusch was the first sustained climb of the Rheinburgenweg and one we made in the climbing heat of approaching midday. It was very hot in the full sunshine and we were glad to get into the cover of the forest beyond the in-fields of the village. A sign posted to a tree pointed towards Calmuth and Remagen. It also showed we were walking the E8 European Long Distance Path which stretches from Ireland to Bulgaria. Knowing that was a little bonus to my walk. 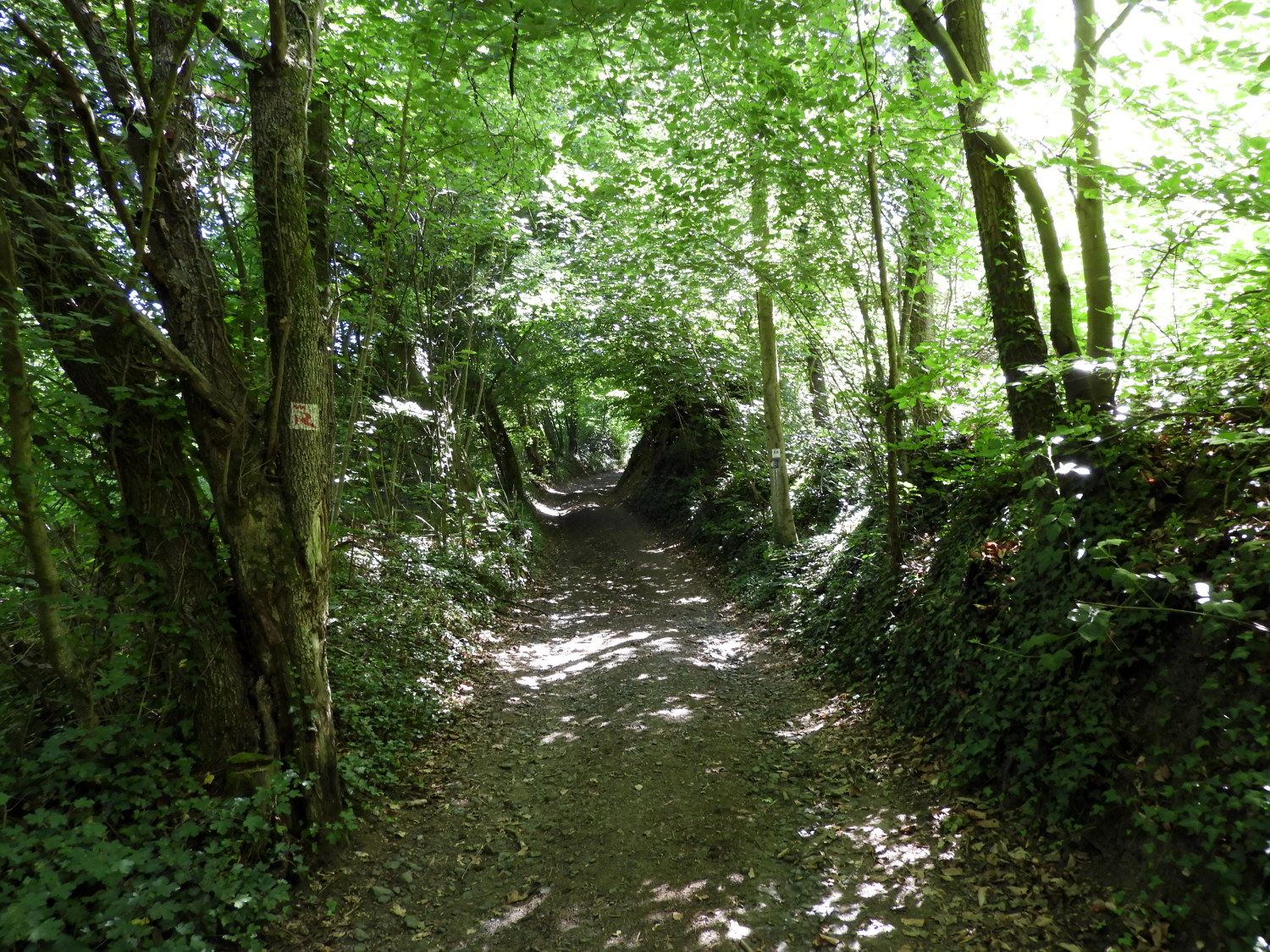 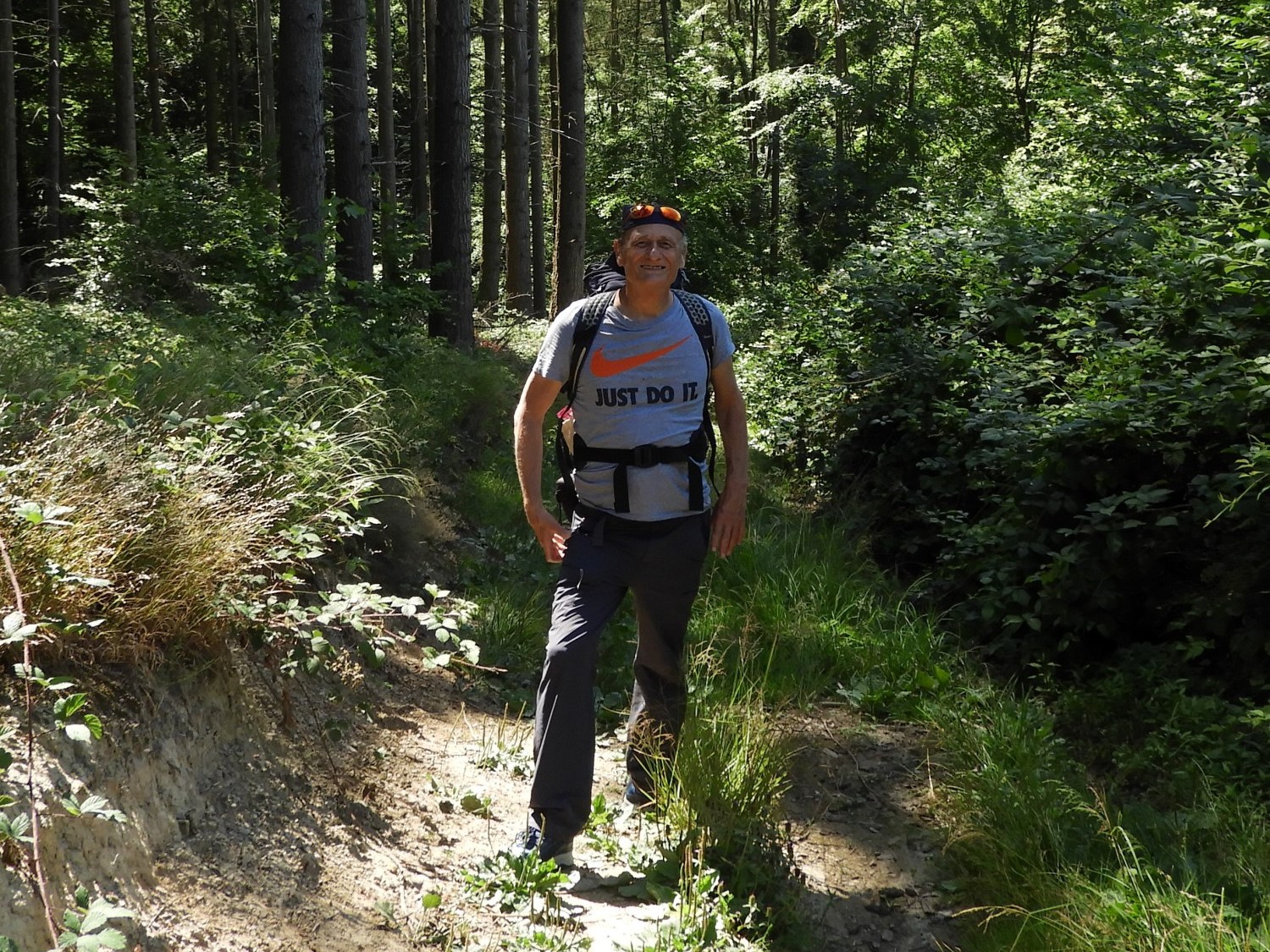 Once the climb of 100 metres to Sahlbusch was done then we were heading straight down again, this time to the Kolner Straße road at Herresburg which we crossed to begin our third and final climb of the day. Over the trickling waters of the Taubentalbach, incidentally for future reference on this walk, bach means stream, and up we went. This last climb of our day was another 100 metre climb but this time we were always shaded from the heat of outside by the high canopy of forest. Which helped a lot. 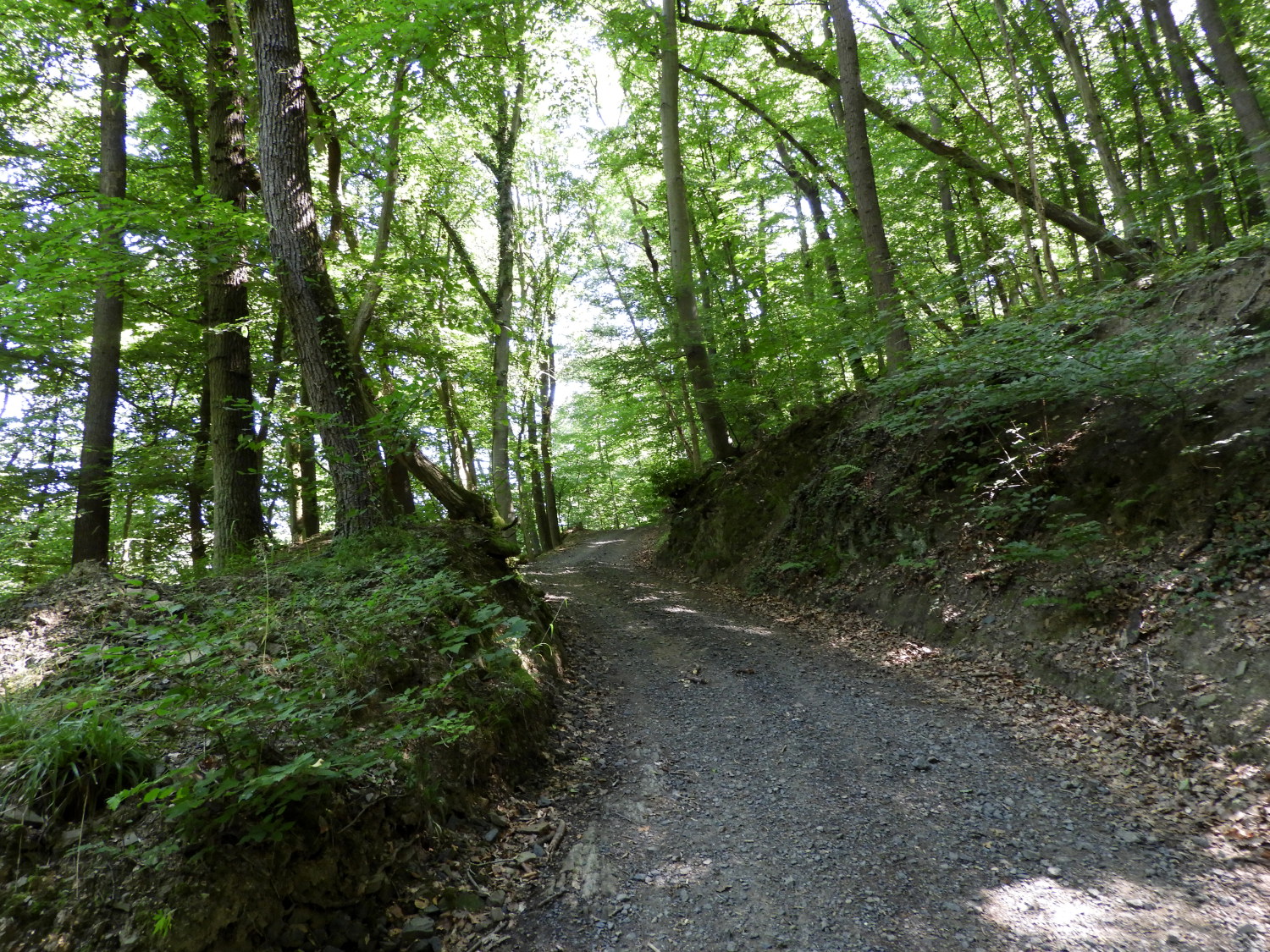 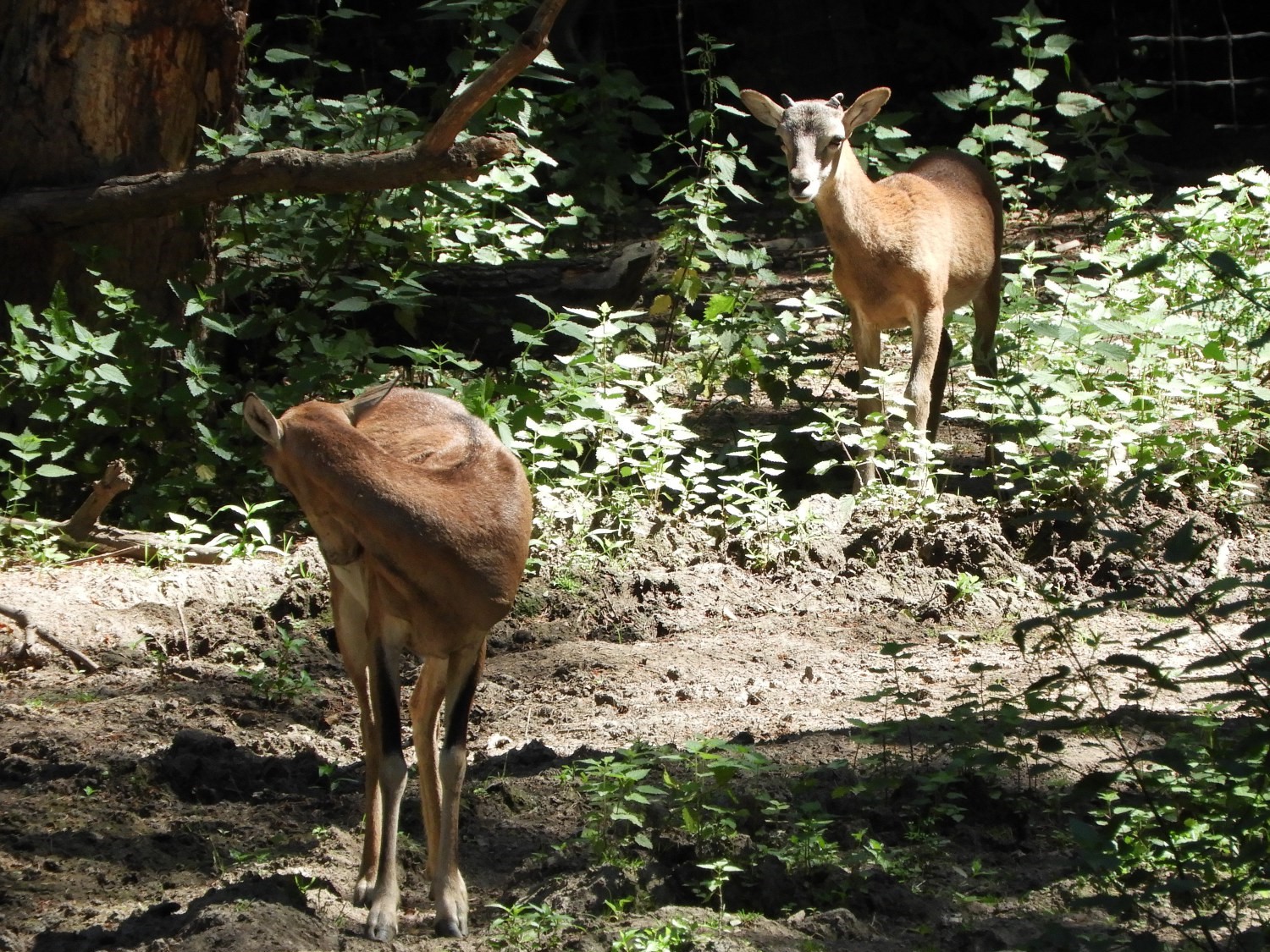 Deer on the Rheinburgenweg Trail

Let me digress for a minute. Here we were on our first long distance walk together and while we had talked about it a lot, mostly on convincing her not to carry the kitchen sink, I was still not sure how she would cope. Having done day walks with me before and with no bother this was the first time she was carrying clothing and equipment. While I bore the most weight she was carrying her fair share. And here on this third and final climb of day one Lil was doing really well. I knew more tests would come and times when she would be tired and downcast but this was a really impressive start. There were no moans at all. In fact she was enjoying the walk as much as me. And at the top of our third climb she got a wonderful reward. Some small deer were grazing in a paddock on the corner of the high point of Taubental. It was a delightful couple of minutes for us to enjoy watching them before we headed on towards the finale of our first day on the walk. 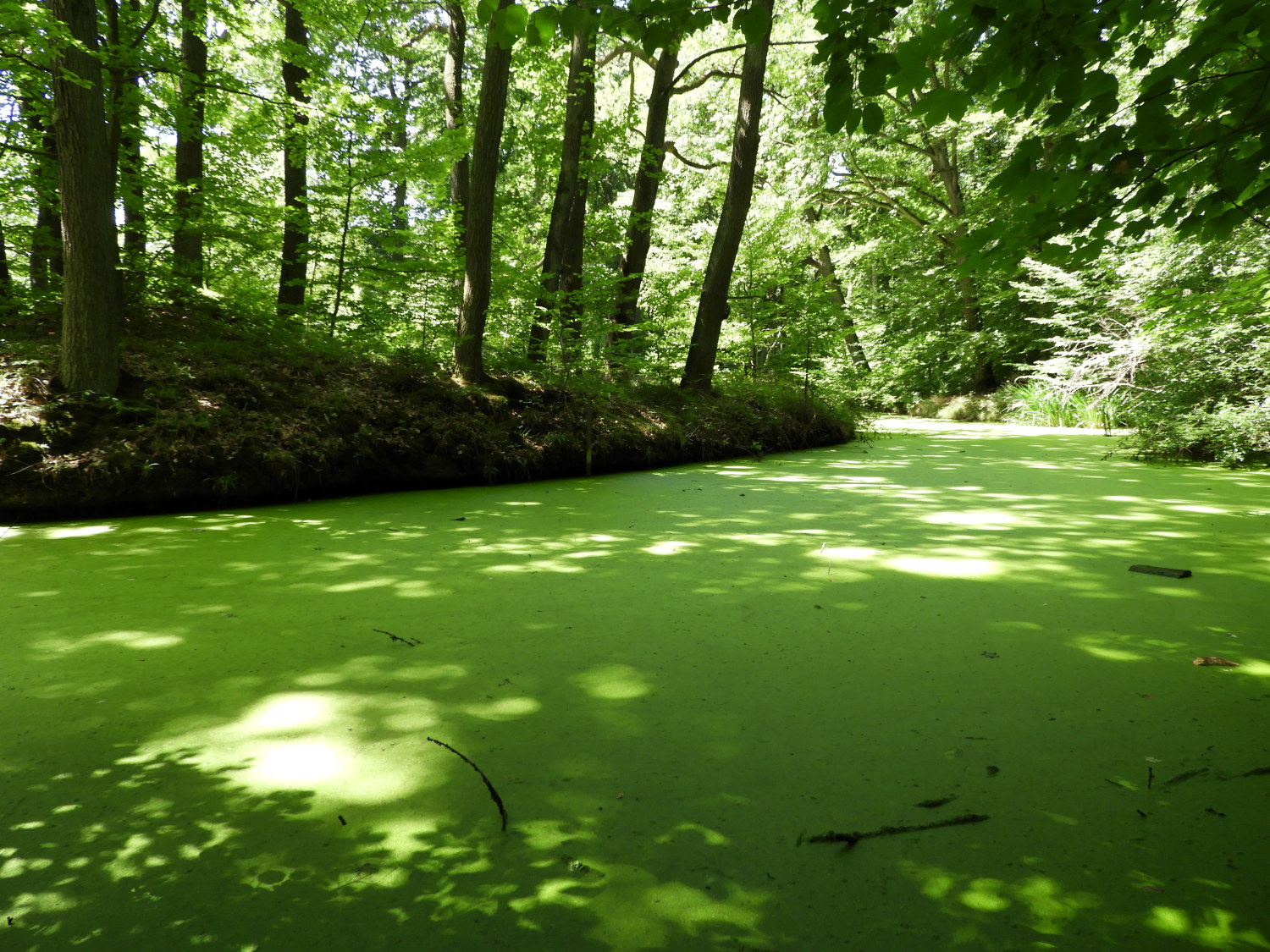 The pond at the Waldschlösschenn 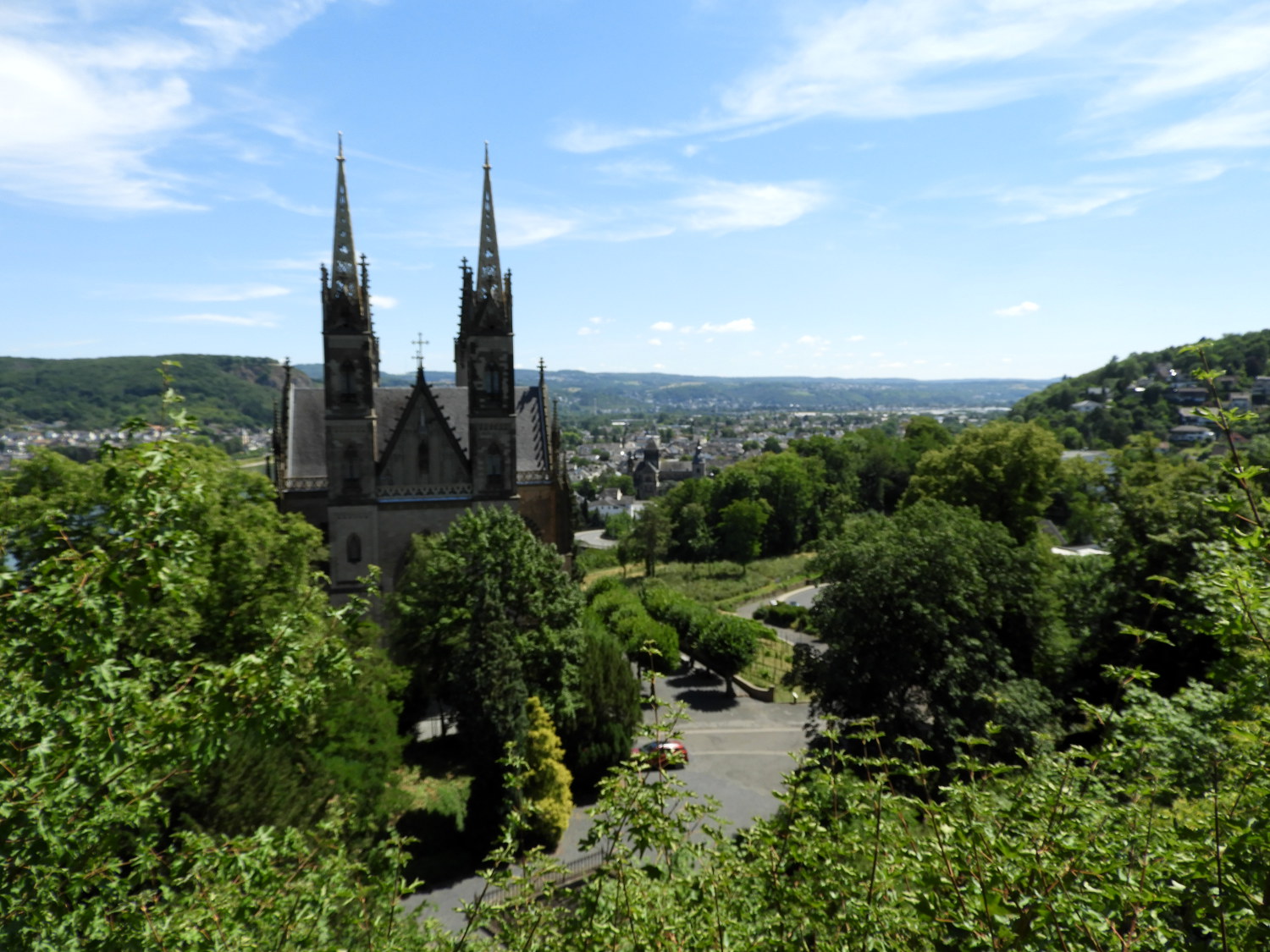 Soon after the entertaining interlude with the deer we reached the Waldschlösschen, a picturesque pond which was completely covered in a thin coat of lime green algae. A popular picnic spot, we passed our first fellow hikers during our German odyssey before finding a bench and table, conveniently situated beside the pond. The ideal spot for a short break before walking down into Remagen. And after the relaxing interlude by the calm water a short walk on a leafy avenue led us directly to a wonderful vantage point looking over Remagen. Dominating the view directly in front of us was the Apollinariskirche. It is a remarkable structure, two rising matching spires taking the eye. From our vantage point the path led us down directly past the church and into Remagen. 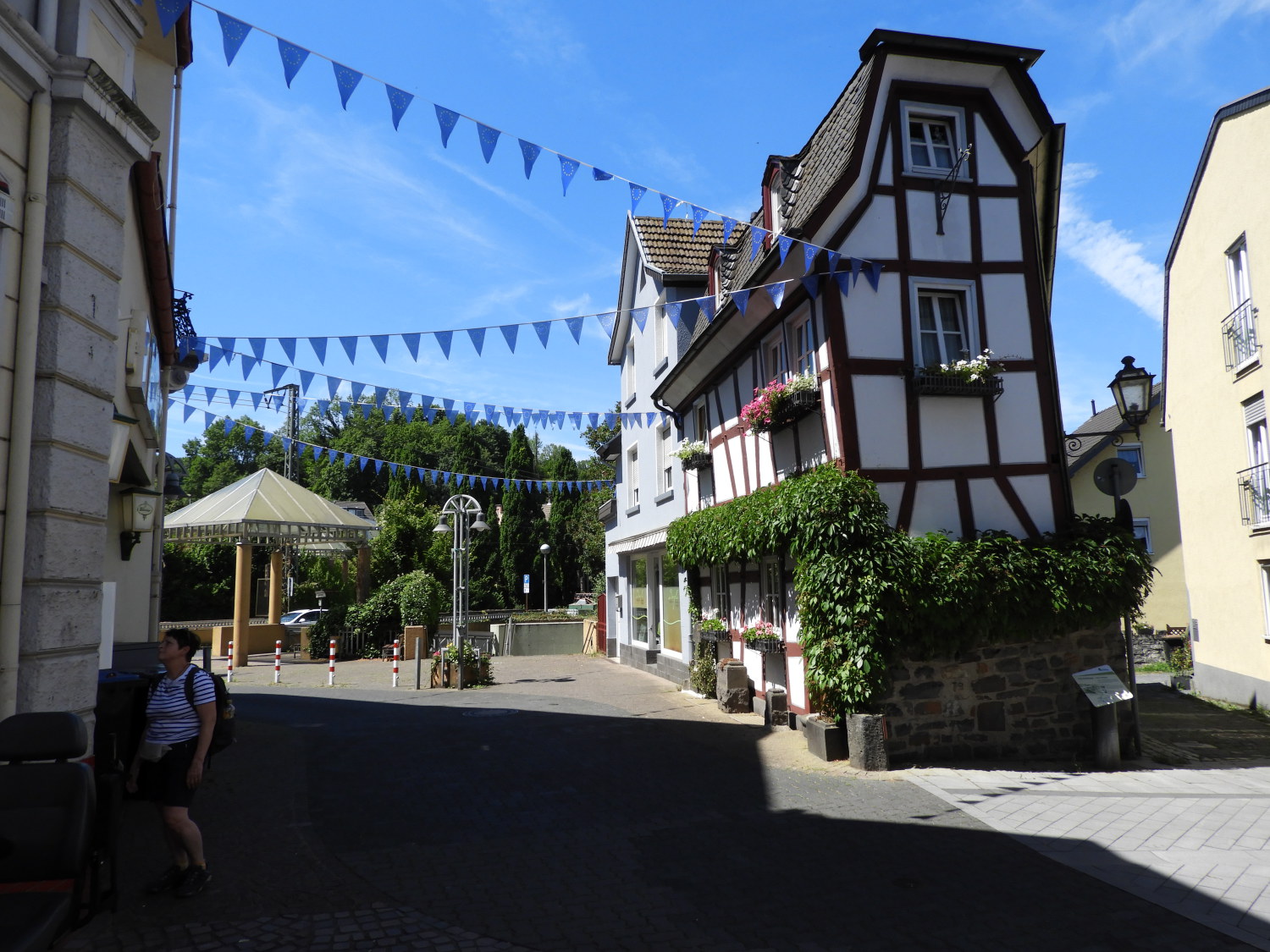 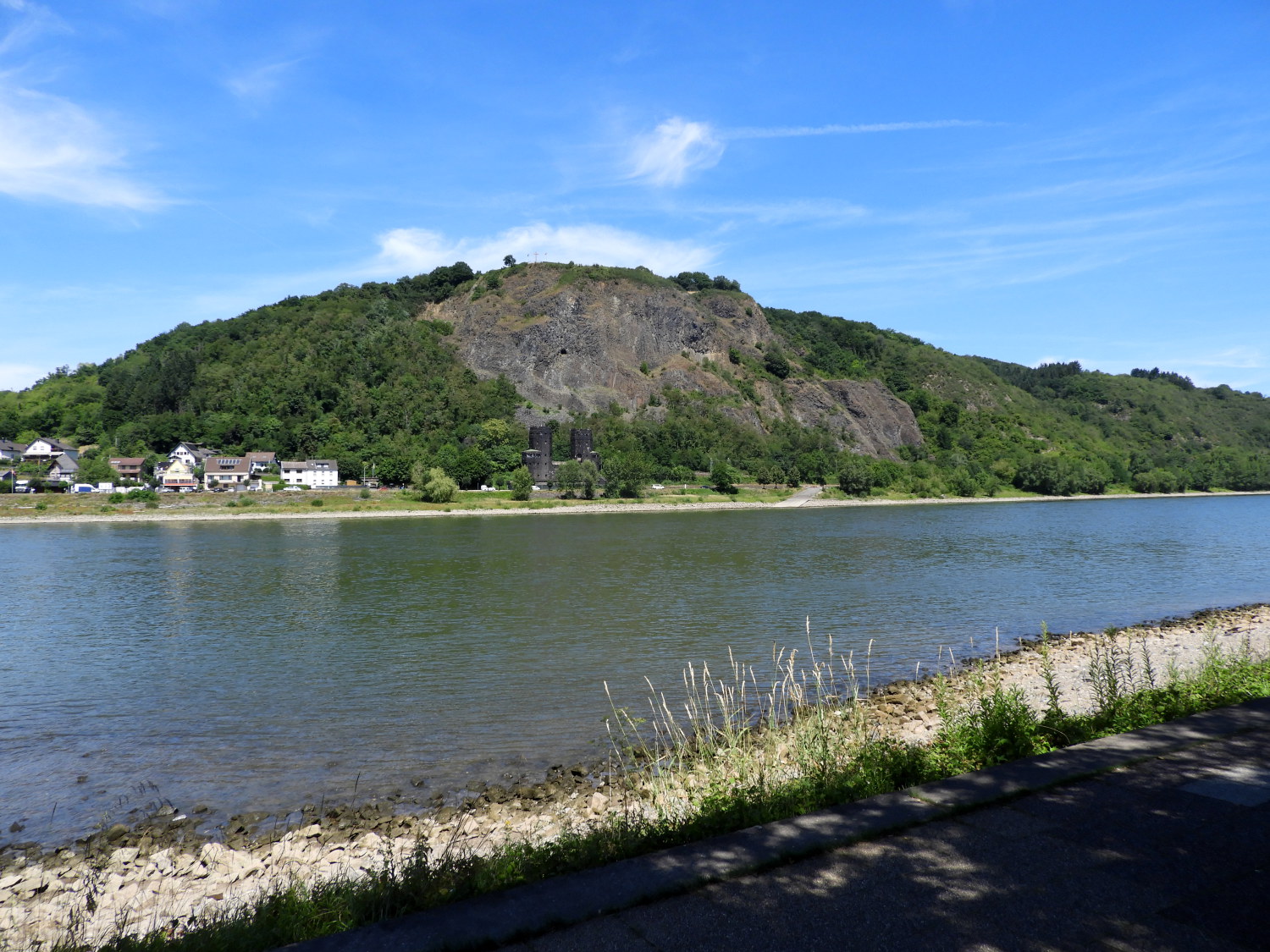 Site of the Battle for the Bridge at Remagen

Feeling chuffed with ourselves, once in Remagen, we headed straight for the nearest open establishment for a drink. Coffee, lemonade and cake was the order and a while later than expected, due to the very entertaining host of our chosen inn struggling to work out how the coffee machine worked, we sat at an outside table to enjoy our drinks and cake and watch the world go by. All was good. And after our break we ambled along the shopping streets to our hotel where we dropped off the bags. I had just one more thing to do before retiring and freshening up for the evening. I simply had to see the site of the Ludendorff Bridge at Remagen, the very bridge the allies took to cross the Rhine in World War Two. The bridge actually collapsed after its capture and only riverside support pillars and towers remain, the south side tower now housing a museum to remember what happened. All was peaceful now. Anyway, the visit to the site was a fitting conclusion to my first day on the Rhine Castles Trail and in the evening Lil and I celebrated with a riverside dinner. After dinner we went back to our hotel happily and looked forward to stage two of our walk.