Summary: A delightful short walk ideal for all the family which will easily fit into a half day or a summers evening. The walk which begins in Reeth heads south into the valley bottom and across the River Swale Suspension Bridge. It then continues across pastoral meadows and up to the lower flanks of Harkerside Moor from where lovely views of the widest and perhaps most picturesque part of the Swaledale valley can be enjoyed. From the moor the walk travels east towards Grinton Lodge before descending back into the valley via Grinton to Low Fremington. The River Swale is then crossed and a further meadowland walk enjoyed before Arkle Beck is crossed leading to the finish back in Reeth. 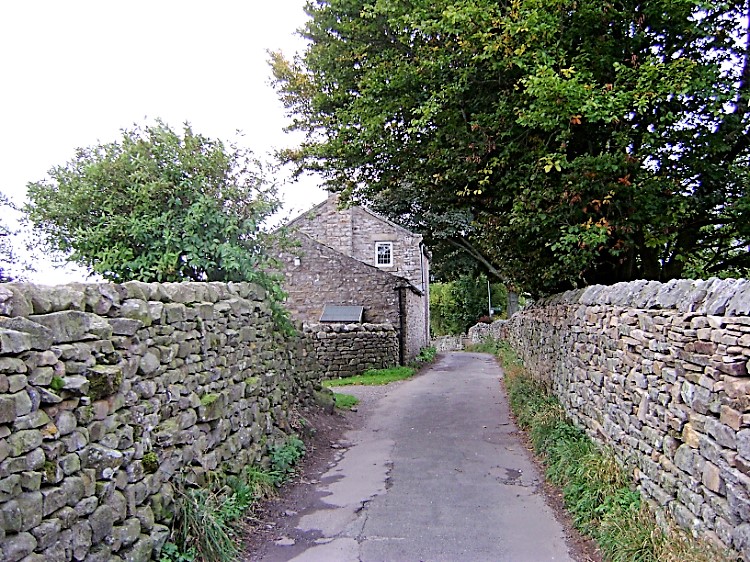 Country lane leading out of Reeth 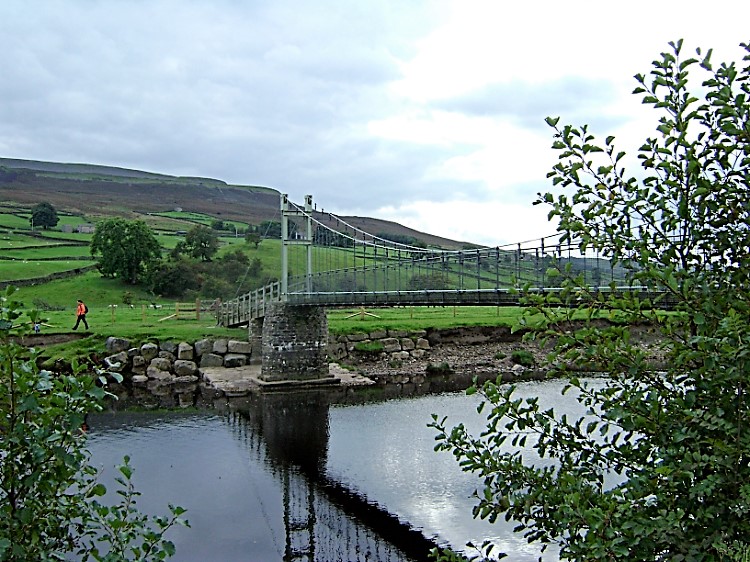 Staying in Reeth for a long weekend with friends and having a couple of hours to spare on the first evening what should we do? go for a walk of course. Not too far, just a walk around the local countryside to get the feel of the place. I knew the locality from previous visits; as did my brother Dave. But for our friend Matt and his son Will it was a first time so with just the two hour window for walking I chose this route. We set off from our accommodation in Reeth and followed lanes and paths leading down to the south side of the village and then followed a lane leading down to the River Swale. The first exciting part of the walk for us all and particularly for Will revealed itself as we reached the river. Reeth Suspension Bridge, a new post millennium one which replaced the original, felled by storms of 2000 had to be crossed for us to continue on our way. We duly did so.

Read why the suspension bridge was/ is also known as Reeth Swing Bridge. It is a funny story. 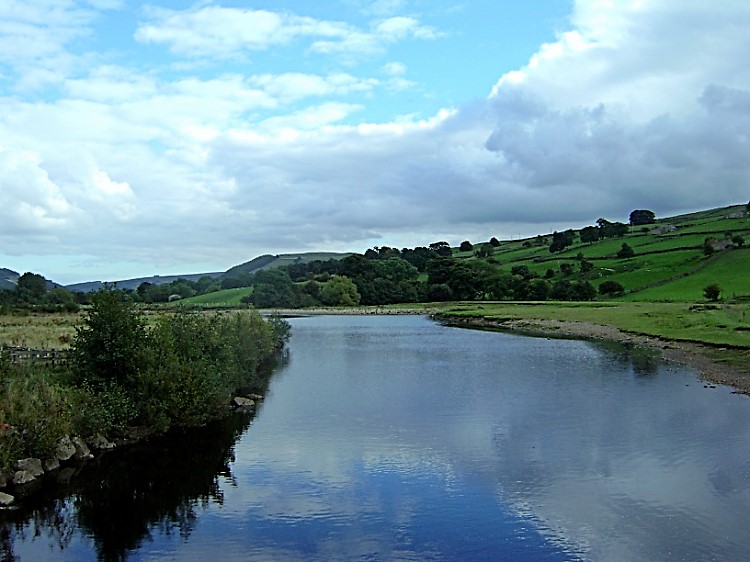 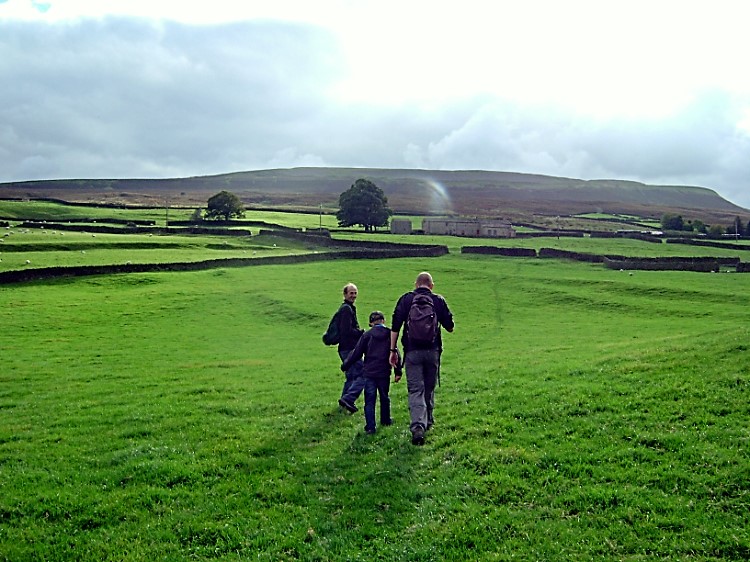 Crossing the meadows of How Hill

After crossing the suspension bridge which did not swing; it was the calmest of conditions, we continued on our way by beginning the steady climb of the walk. Towards Harkerside Moor by way of How Hill and meadowland to Harkerside Place. We crossed How Hill without really noticing, it being no more of a bump in the ground, and continued on, talking while walking on a very steady incline towards the south side moors of middle Swaledale. After an overcast early October day the final part of it was brightening up. Warming sunshine glinted through the thinning cloud as we climbed towards the moor. The scene, the setting and the improving weather were all in our favour. For the second week of October it was delightfully warm. We felt good. All was enjoyable. 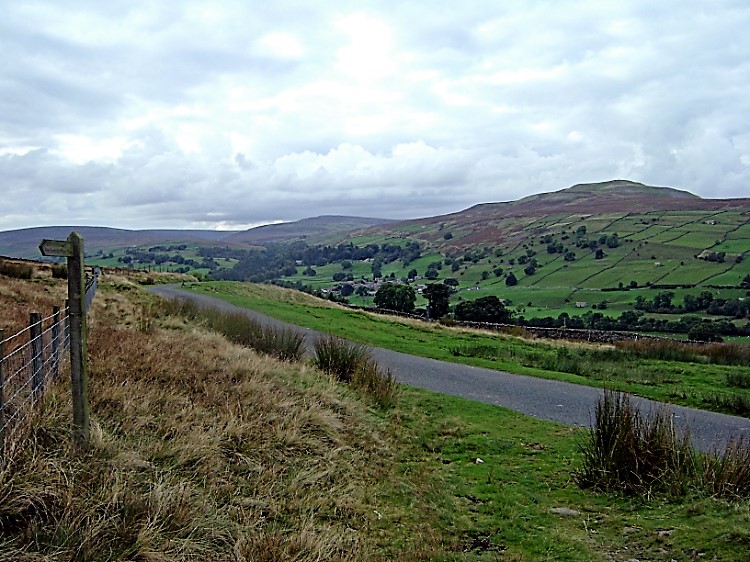 View from Calver Hill from Harkerside 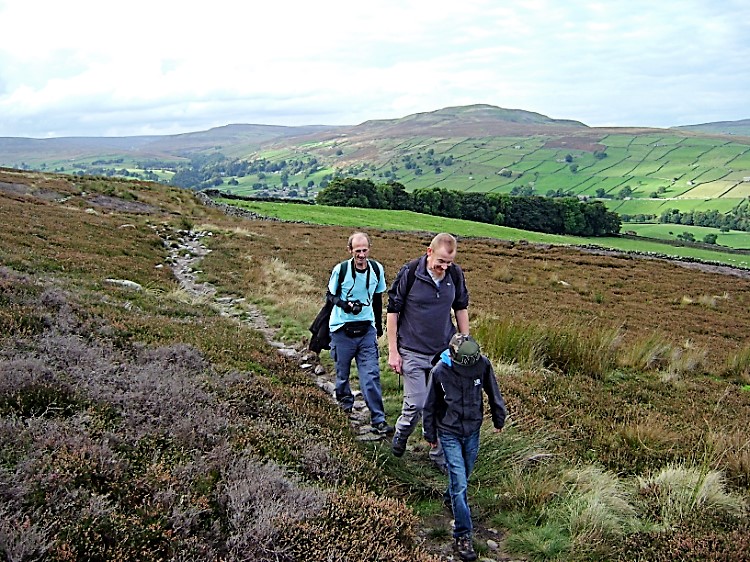 It was not long before we had climbed to the farm at Harkerside Place and beyond to the minor road linking Scabba Wath Bridge to Grinton. At about 80 metres altitude above the river the views of mid swaledale opened out to reveal an astonishingly beautiful scene. Looking north west across Swaledale to Calver Hill and beyond to the high moors where Tan Hill Inn nestled as a mere dot in the distant landscape was an enticing scene. "Must go up there again soon" I thought. For now though the fringe of Harkerside Moor would suffice. Dave, Matt, Will and I set off heading south-east across the edge of it. Some patches of lovely purple heather remained. most of the bright carpet was gone for another year though, turned to a shade of russet brown. We followed a well established path through the heather land. 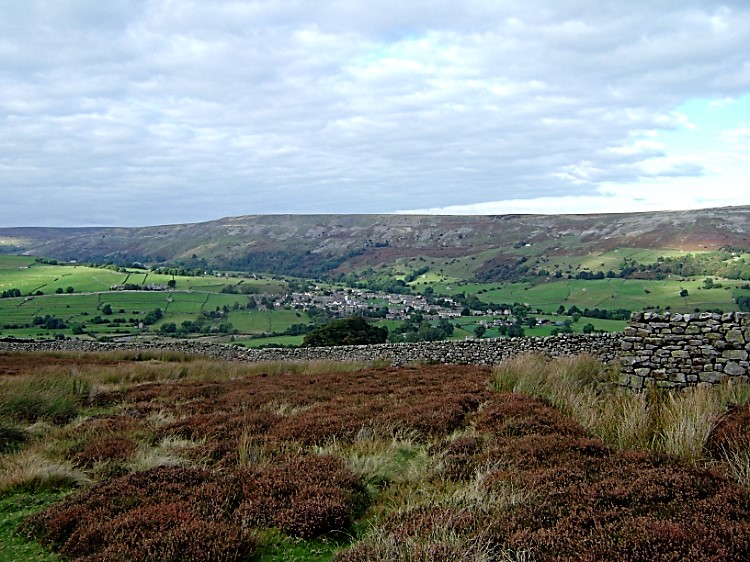 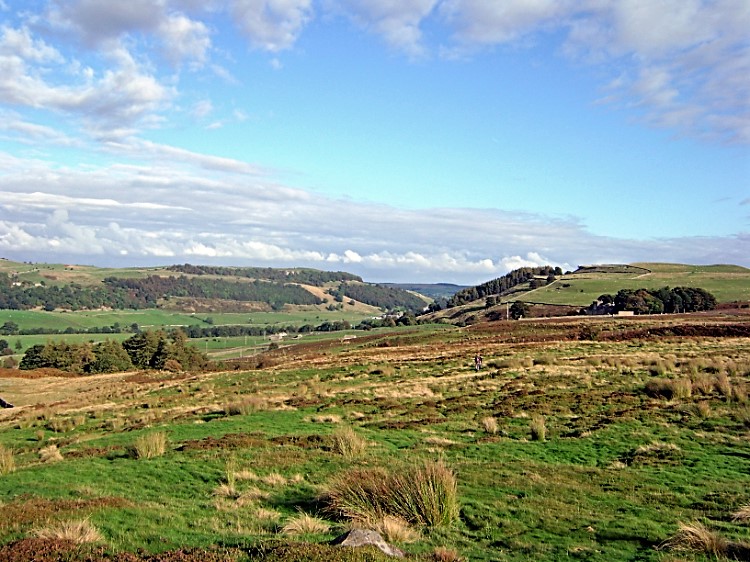 It was turning 4.00pm as we edged along the south side of Harkerside Moor, on the highest part of our walk towards Grinton. As we crossed to a point called John Moss's Chair on the Ordnance Survey Explorer map the cloud noticeably took a step back and blue sky revealed itself in full, starting out from the east and inexorably pushing the cloud from the sky. We only had about an hour of good daylight left, but remarkably it was going to be very bright. It couldn't have been better. Especially now as the views were at their very best. The scene north-west was as good as before, if not better in the improved light. And the view north-east along the maturing Swaledale valley towards Richmond was also a smasher. It was all lit up and sparky. 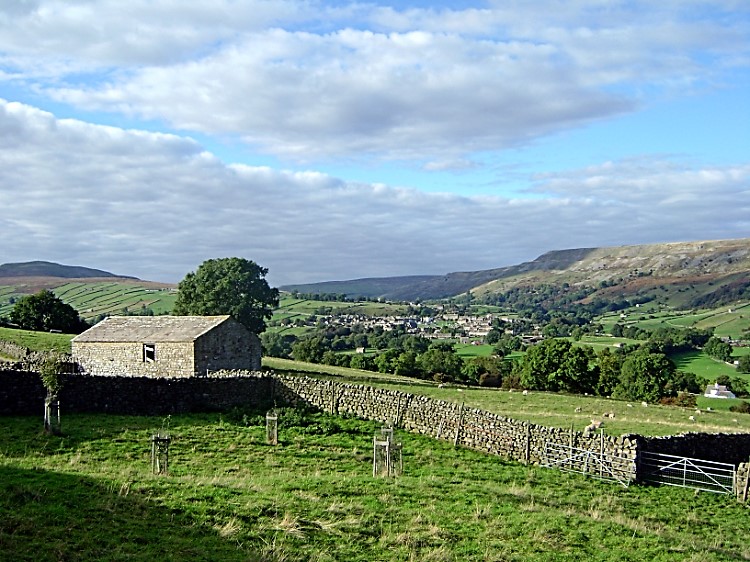 View from Grinton to Reeth and Fremington Edge 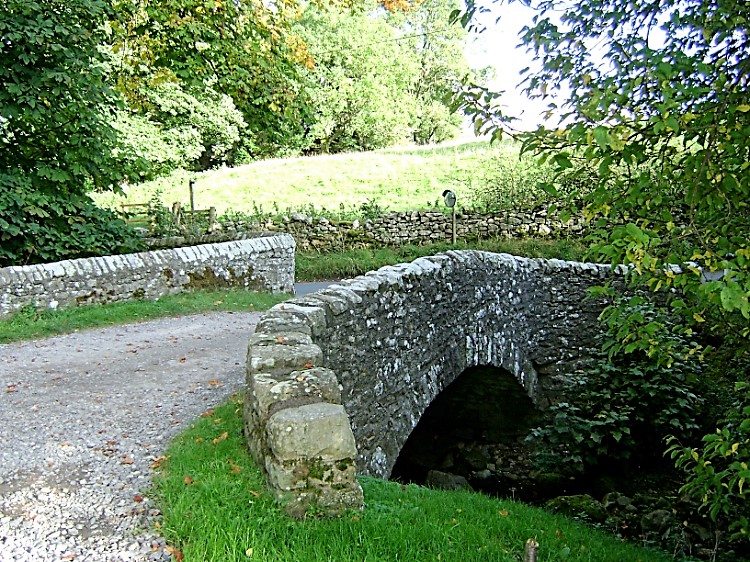 Reeth was also bathed in evening sunlight now and a gorgeous sight it was. Swaledale for the most part, unlike Wharfedale, its neighbour to the south, is a narrow valley. Generally it only reveals itself up close as you walk or drive thorough it. Villages and hamlets appear suddenly on the course through and disappear just as quickly once passed. But here, just here, Swaledale shows itself to be spacious and wide. Because of the coming together of Arkle Beck with the River Swale a sumptuous breach in the narrow valley is made. And so here, in this lovely evening sunlight we could observe the natural idyllic picture which included Reeth and Fremington Edge as the centerpiece. I could have stayed for ages. Reluctantly for me as I took in the picture a little too long and now trailed the others, onward we went. I caught up just as we left the moor and followed the path to Vicarage Bridge, a lovely natural stone packhorse bridge which straddled a lane west side and the tarmac road linking Redmire in Wensleydale to the Swaledale valley east side. 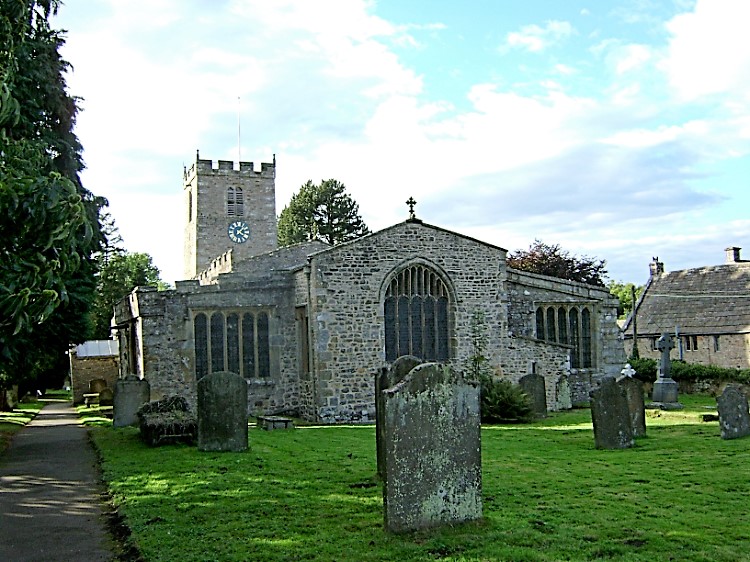 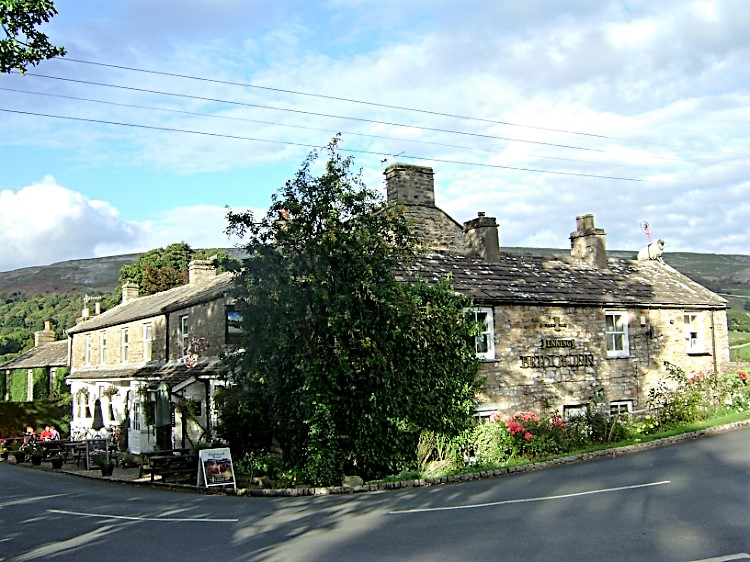 We followed the lane until we were forced onto the road betwixt Vicarage Bridge and St Andrew's Church, Grinton. While walking down the road I met up with a couple of ladies and we ended up chatting like old friends. We all agreed it was a wonderful day and one perfect for taking time to enjoy the outdoors. "It will soon be dark and dismal winter" one said. "Yes indeed" I replied before adding a friendly "goodbye". Then we skipped on down the hill and passed the church, soon coming to the Bridge Inn which sits on the junction of the cross dales road and the main valley road. Bikes were parked outside the inn as they nearly always are. Some were powerful motorbikes, some were pedal bicycles. About equal numbers of each. We foot sloggers passed by, greeting bikers of both types who sat and rested outside as we made our way past the inn to the river. 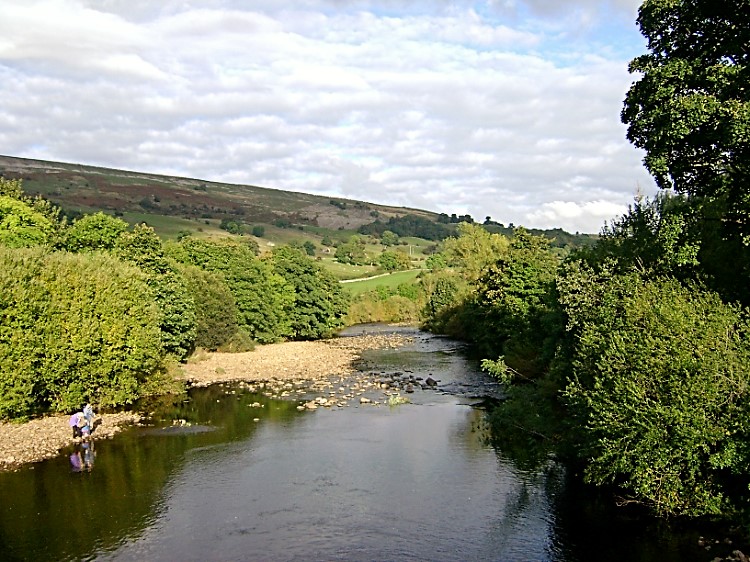 View to the River Swale from Grinton Bridge 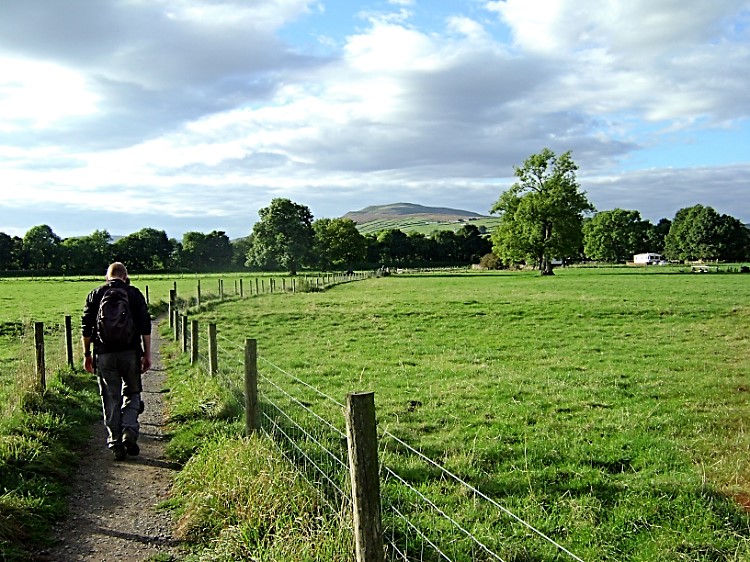 The path from Grinton to Low Fremington

From Grinton Bridge we paused and looked over to watch two grandparents showing a toddler how to skim stones. I remembered those sepia days of my youth when my dad showed me how to do that in Brompton Beck. If only we could turn back time eh... After my thoughts of welling nostalgia we continued on to complete the final stretch of walking across the pastures between Grinton Bridge spanning the Swale and Reeth Bridge spanning the Arkle. The final piece of sunshine in the days weather puzzle accompanied us across the divide between the two bridges. As soon as we reached Reeth the sun went in. Still it had done its job, highlighting the walk at the appropriate points. Those views from the moor in perfect early evening sunlight are captured memories now. Forever.