Summary: This walk is one of three parts with the squelchy bit in the middle. First off is a walk through the site of the Grassington Moor Lead Mines which is always interesting. Following the journey through industrial heritage the walk continues over the seemingly bleak and soggy moorlands of Grainings Hill and Priest's Tarn Hill but a series of Grouse shooting points and boardwalks give it away as a place of regular human activity. Afterwards the finale is a crossing of pastured moor, including a poignant visit to a site of tragedy and a walk past a few more redundant mining sites. 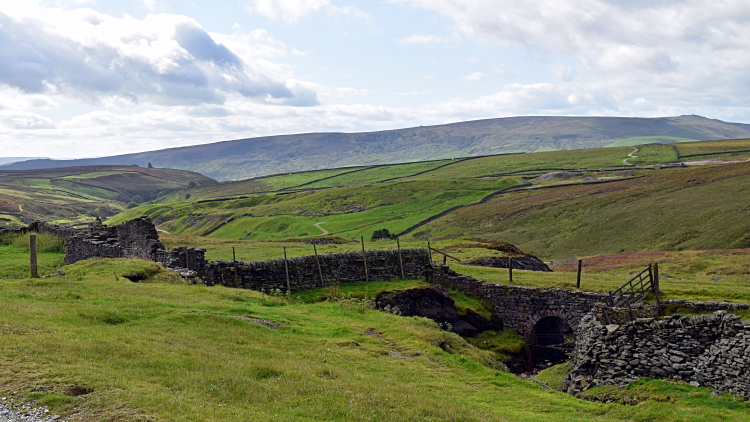 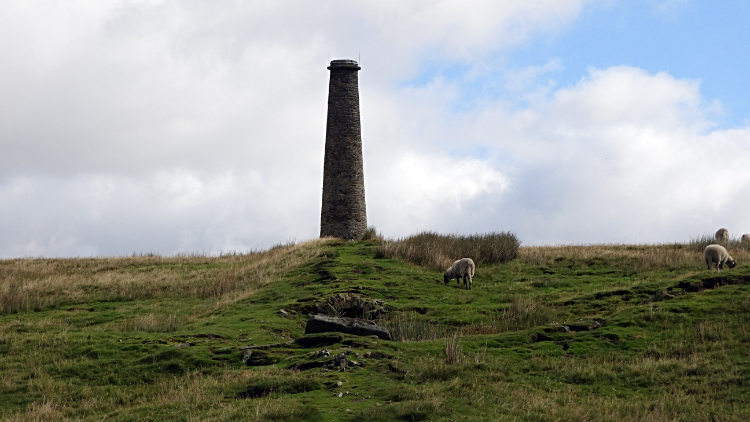 My brother Dave and I were on a series of fairly local walks in the first pandemic year of 2020 and this was the nearest to home, just an half hour's drive from our homes in Harrogate. The weather was not bad for mid September with no chance of rain but cloud cover for most of the day coupled with a cool breeze up on the tops made us keep going most of the way. Starting off from way the road ends at Yarnbury, a mile beyond the diminutive but ever busy market town of Grassington, we strolled away past numerous sites of industrial heritage. A series of information signs put us in our place, or more accurately told us of the place we were. These included the 17th and 18th century pock holes of 'Shallow Shafts' and the site of a condenser house. Climbing steadily from the start, there were decent natural views as we gained height too, the best looking east across Hebdenhigh Moor to Gouthwaite Moor. From the condenser house we reached the flue and followed it all the way up to the chimney, long redundant but still standing proud on Grassington Moor. 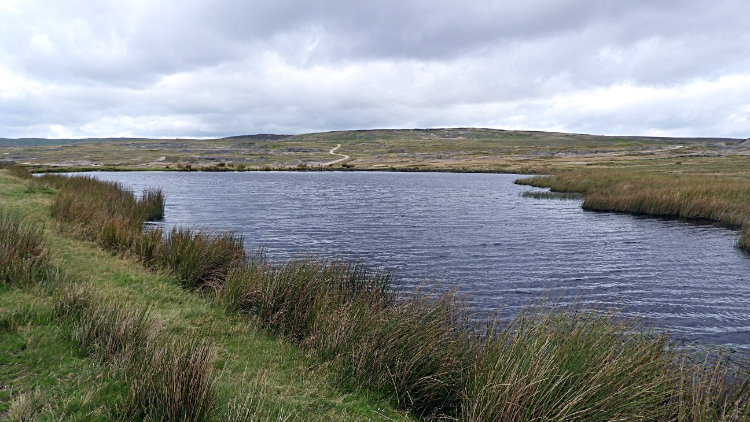 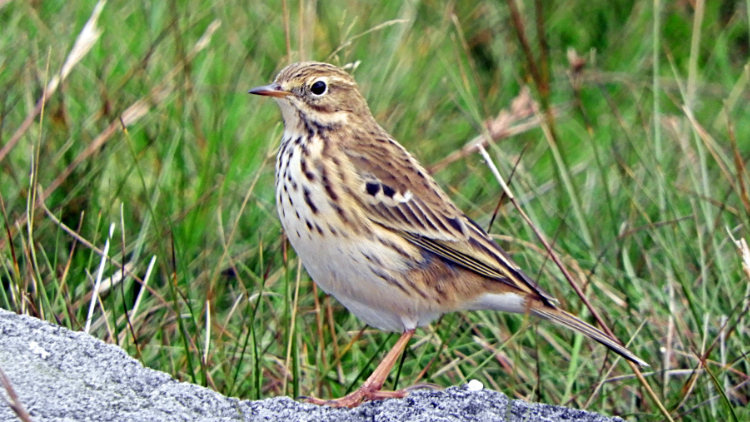 Beyond the chimney were more sites of industrial past. A few guarded shafts we already knew about. From experience and from a sign which warns newcomers onto the moor. There were also a few dam reservoirs. Nearest the chimney is Coalgrovebeck Reservoir. More ruined buildings too including High Winding House. We could have stayed ages exploring and still making new finds despite the many times we had been here. But our walk today took us away from the dead industry to an area of old but continuing enterprise. On the way there, following a track north-east to Swallow Hole we encountered a flock of Meadow Pipits. They kept on the move, hopping, flying and bouncing along just ahead of us and being ever watchful. It was a fun encounter with the perky birds which is also known as mippit, mosscheeper or titlark. 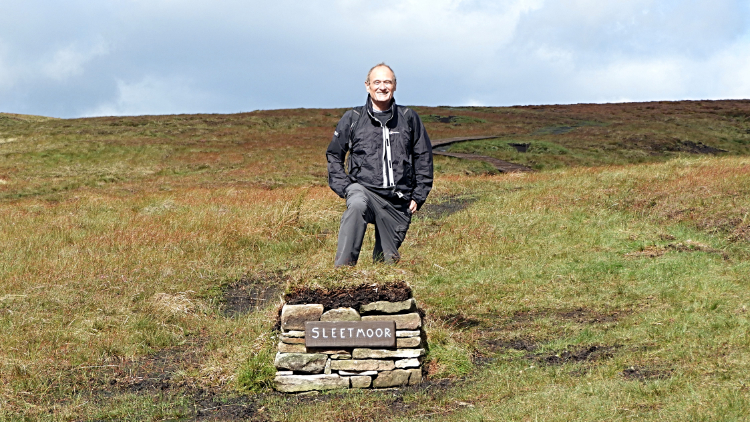 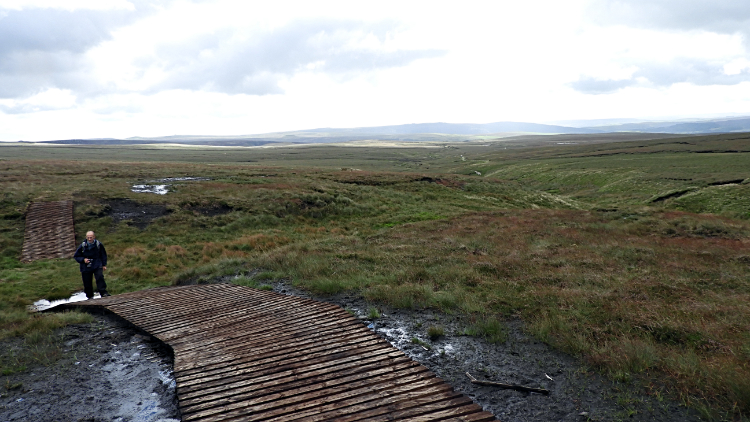 The continuing enterprise I mentioned. Moorland shooting. The hard track petered out and turned into an unmade one as it climbed up over an area of sinks and streams from Swallow Hole to Sleet Moor. A parallel line of vehicle tracks crossing different shades of green, made so by differing amounts of wet ground showed us the way. Ever so the ground became boggier though, so much so that the vehicle track ended abruptly to be replaced by an undulating board walk leading from Sleet Moor to Grainings Hill. Then the clear proof of industrial killing. the first Grouse Butt or sunken shooting pitch. A shooter could comfortably nestle in it all day, sheltered from the wind, stood with only head and shoulders above the parapet and firing away at will. Then the next Shooting Butt. We counted about ten in all, evenly placed in a line leading along the line of Straight Grainings Beck. Where the Grouse Butts ended so did the boardwalk. "Does this go anywhere? Is there a path" said a concerned Dave. 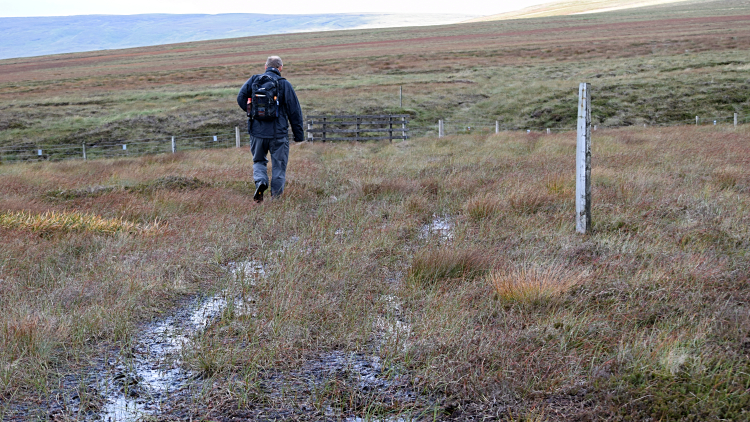 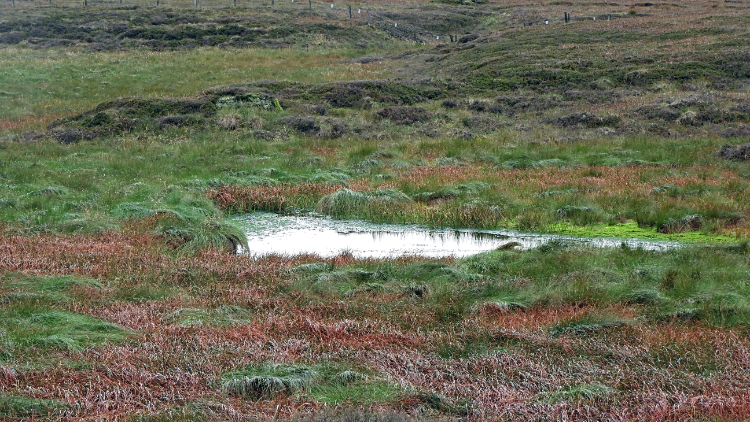 The underwhelming puddle of Priest's Tarn

I said "Yes, it follows a dotted black line on the map". But I knew there wasn't one. It was not far to go across the right to roam land of no paths and I had to keep Dave going. It would have been harder to turn back anyway so off we went on a one mile yomp over the soaking ground of peat moor which is what Feather Bed Moss was. I knew the climbing was almost done anyway, just twenty metres of ascent to the enigma of Priest's Tarn which I really wanted to see. So I squelched on and Dave squelched on twenty metres or so behind. After ten minutes or so of puddling on while a few audible blasphemies were heard from behind me I spotted Priest's Tarn. Underwhelmed is an understatement. The tarn was no more than a puddle. Perhaps in midwinter and after the thaw of heavy snow the tarn resembles something like a pretty upland lake. Not now. On seeing it I could not be bothered to try and sell it to Dave. "Keep going Dave, it is not worth the effort of breaking step". 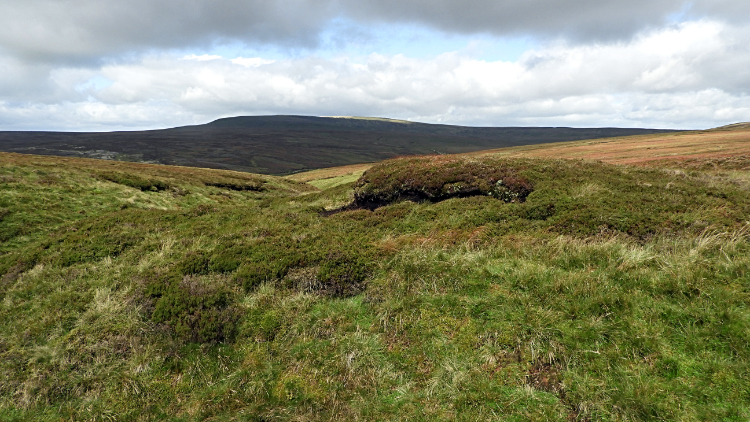 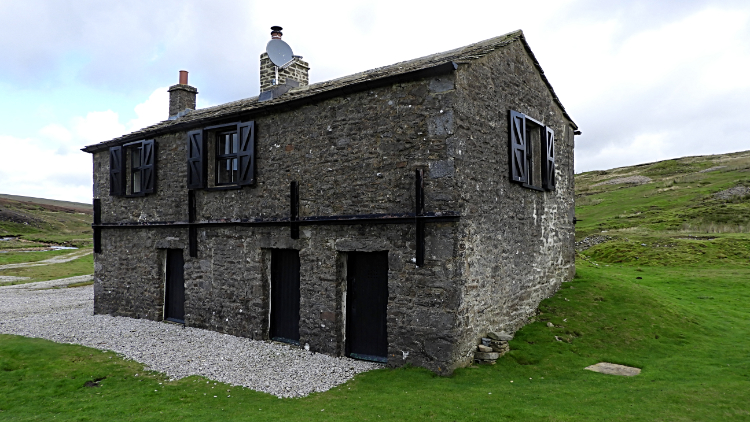 Priest's Tarn on top of Priest's Tarn Hill was the highest point of the walk. Bar a slight dip immediately after the start at Yarnbury we had been continually climbing, going from a low of 320 metres to a high of 520 metres. "All the climbing is done now Dave, all downhill from here" I said, perking him up. And it was, the first bit the hardest on a descent from Black Edge over thick tussocky ground and via a cut leading down to the site of a shooting hut in Mossdale. Half our one hundred metre height loss was made in the one kilometre descent to the hut. The following hundred metre loss would take six more kilometres. Thus going down was a bit tricky in the slippery conditions but by meandering, side-stepping, edging and zig-zag walking we got down safely. Knowing the ground from here on after my previous Mossdale walk I could safely tell Dave it was very easy going from now on. 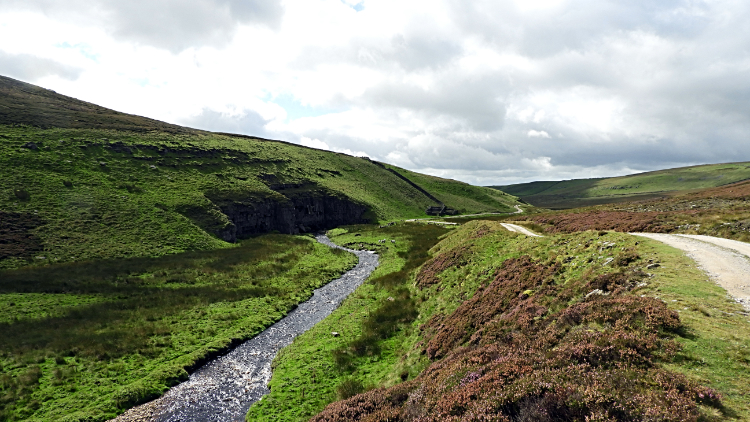 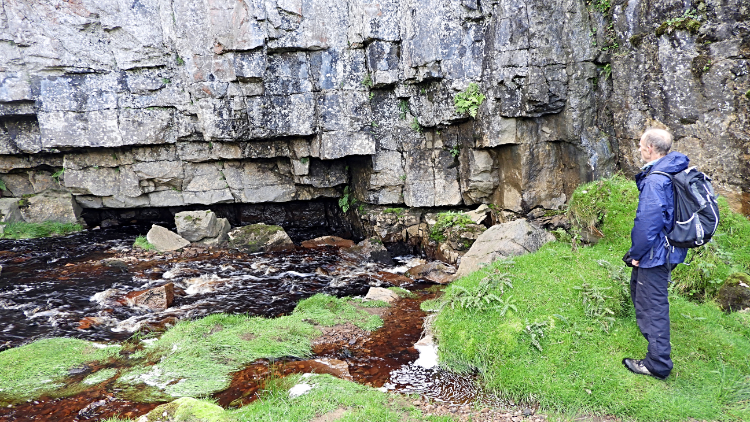 One of the entry points to Mossdale Caverns

From the shooting lodge we ambled down the good hard track following Mossdale Beck down to the cliffs of Mossdale Scar. The scar is the site of entrances into the potholing network which is Mossdale Caverns, the site of a great tragedy in the 1960's. A plaque set into the cliff face told it all, reading 'In everlasting memory. From the families of David Adamson aged 26, Geoffrey Warren Boireau aged 24, William Frakes aged 19, John Ogden aged 20, Michael John Ryan aged 17, Colin Richard Vickers aged 23. Who rest here in Mossdale Caverns where they died 24th June 1967. I will lift up my eyes unto the hills from whence come my strength'. My word, so young. I had seen this plaque before but it still put a lump in my throat. The sun came out for us at the site of the tragedy so in the warm and shelter of the scar Dave and I sat down by Mossdale Beck and had our lunches. We did not say much. 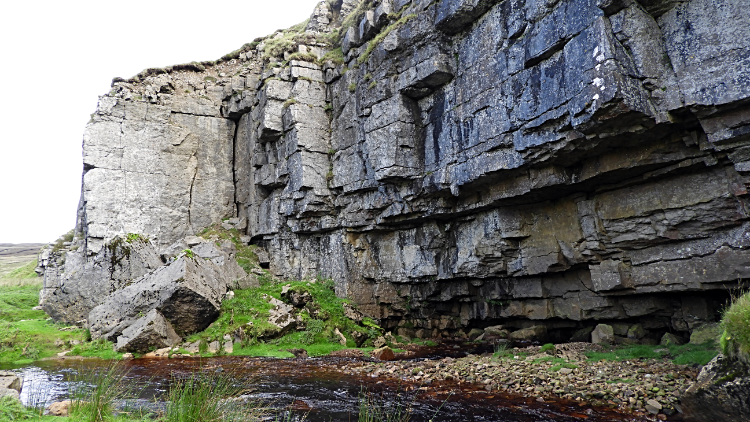 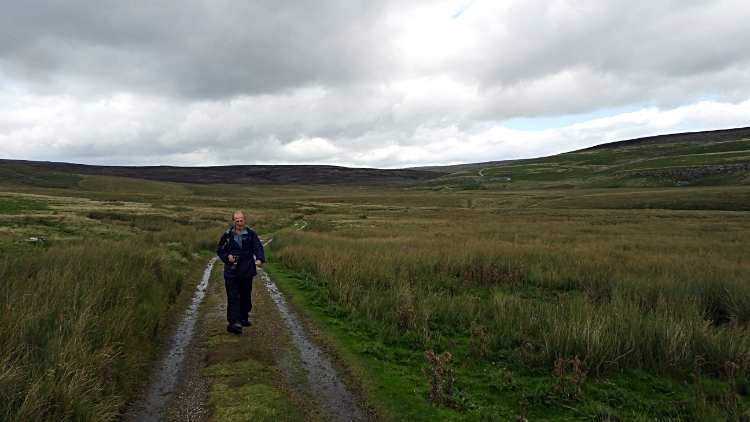 On the path at Bycliffe

We could stroll now, all the effort of the walk really behind us. The path from Mossdale Scar to Bycliffe on aptly named Bycliffe Road is a very good hard track and bar for a few dips which easily pool the route is set out before the eyes. The only thing to think about, apart from the walking, is to turn off from the main track at Kelber and take a course due south to Seeds Hill and then to Green Hill. Failing to do so will lead to a continuation along Bycliffe Road to reach the crossroad of paths where Bycliffe Road meets the Dales Way path and Scot Gate Lane near to Conistone Pie. We did not want that today as it would eventually lead to a long and unnecessary walk back up the long road from Grassington to Yarnbury. 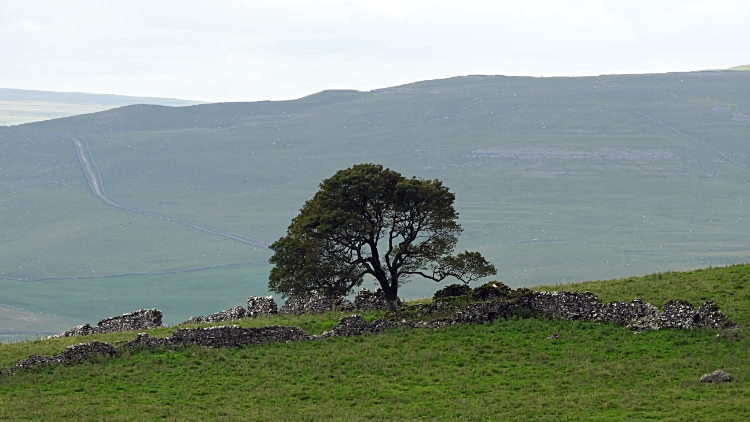 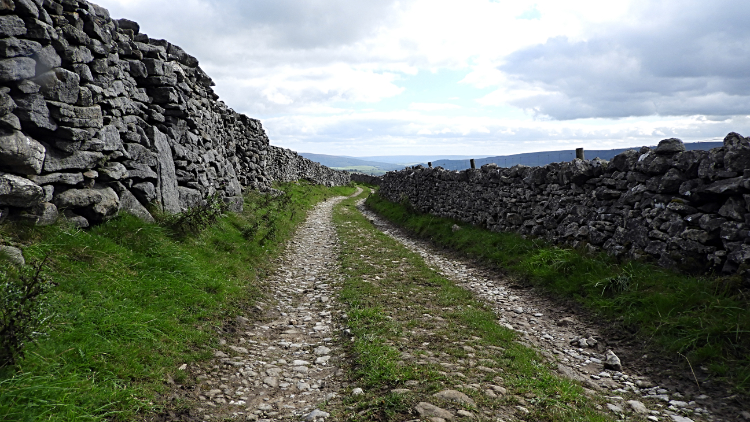 Having made the correct turn at Kelber Dave and I headed south, walking beside a low drystone wall of little purpose to first Seeds Hill and second to Green Hill. Keeping the southward line we next crossed Downs Pasture to reach another area of disused mines and shafts. Realising the extent of the works I try to imagine how busy it might have been if all sites were productive at the same time. There would have been hustle and bustle everywhere. Smoke fumes, stench, all sorts of mayhem. Now it was peaceful with just me, Dave, a few other walkers here and there. And the sheep. Eventually leaving the open moor around New Pasture Edge we followed a closed lane back down to Yarnbury. Another good day out done. It had been nice to return into Mossdale after over a decade away.