Summary: A walk with two distinct climbs, the first at the beginning and leading up to Giggleswick Scar, 140 metres above the village bearing its name. The second climb is from the small village of Feizor, another 140 metre ascent to the highest point of Smearsett Scar though my colleagues only made the eighty metre ascent needed to walk the path through the gap south of Smearsett Scar. The walk is entirely through limestone country with good paths throughout including those on the finale leading through the Ribble valley between Stainforth and Giggleswick. Oh, I must not forget the spectacular falls at Stainforth. All elements contribute to a great walk. 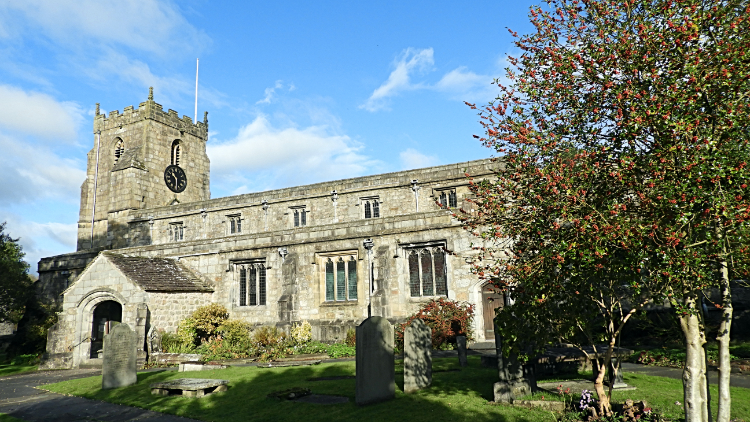 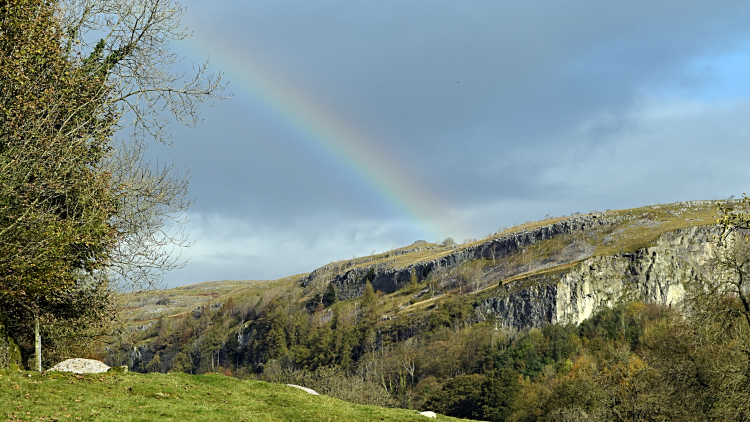 It was not a bad day at all for the last week of October, a sunny late autumn morning. Dave and I had met up with Tim for this walk, Giggleswick being just about half way between his home in Kendal and our respective homes in the Harrogate area. Though it was sunny we were all firmly wrapped in coats as we set off. The local deciduous trees were still hanging on to their leaf in Giggleswick as we walked along Church Street through the village and up Mill Hill Lane on our way to the scar though the prominence of red berries on the Rowans showed it would not be long before leaves would be shed to the ground. Climbing along Mill Hill Lane we passed the famous Giggleswick School where television presenter Russell Harty had famously taught Richard Whiteley of Countdown fame and Anthony Daniels the actor who played the android C-3PO in the Star Wars films. I bet that was interesting. After climbing the road past the school we caught our first sight of the man made limestone cliffs of Giggleswick Quarry. They were illuminated with a gorgeous rainbow. 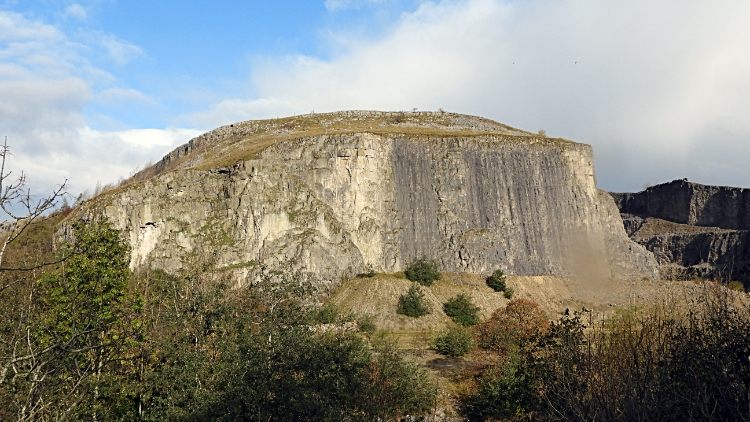 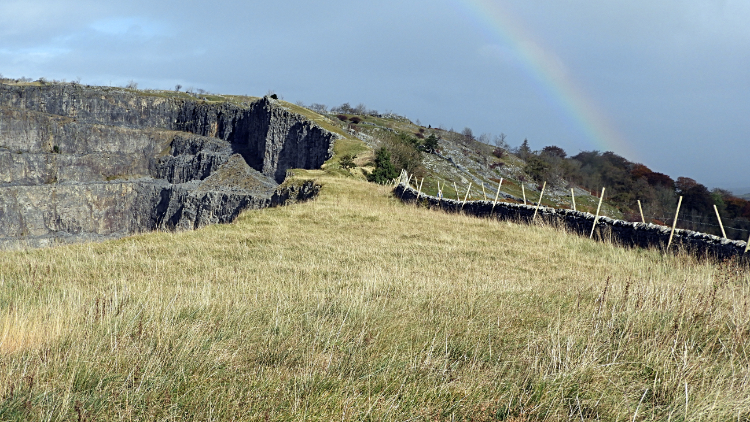 The narrow path beside Giggleswick Quarry

The rainbow persisted as we carefully crossed the B6480 leading to the path climbing steeply through a copse to reach the heights above the quarry. It was a lung buster of a climb through the trees. Short but very sharp, sixty metres of height gain in just a couple of hundred metres walked. Suffice to say we took a short break and gasp for air on top of the quarry. A narrow path showed our way around the north side of the quarry to reach Schoolboy's Tower. For a long time I had been intrigued by this wording on the map. It was bracketed as (cairn) and that is exactly what it was. An innocuous pile of stones which used to be cared for and kept in shape by Giggleswick School pupils who each by tradition should lay one stone on the cairn but is now a neglected jumble. Next we arrived at the point on my map reading Nevison's Nick which was indicated as an area of caves. I could not find one. Later by looking at a caving website I found we would have needed to climb down the face of Giggleswick Scar to find them and that was not in the plan. 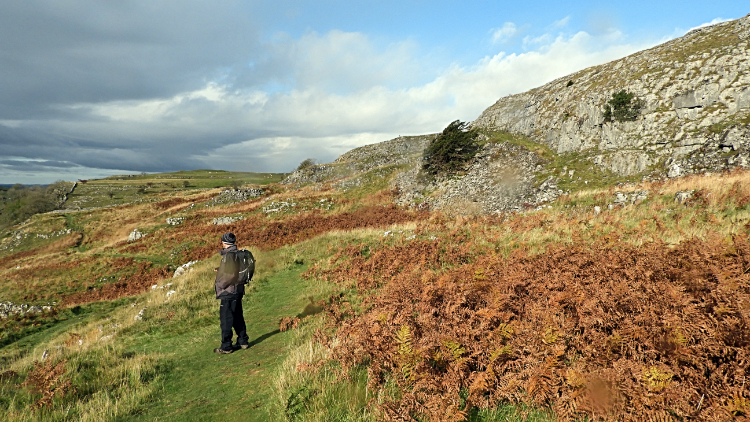 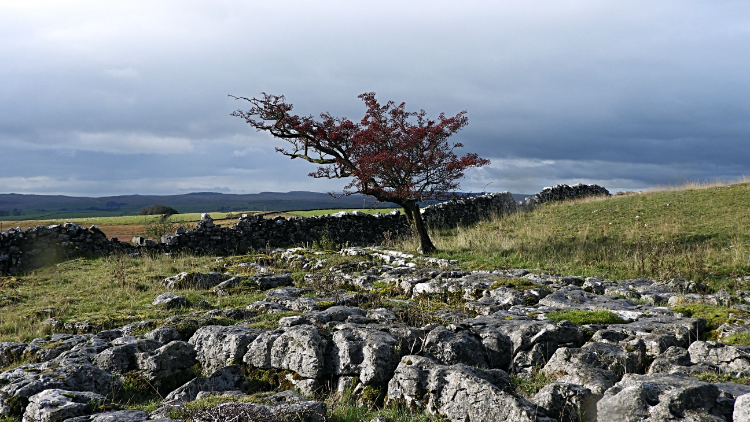 Once Dave, Tim and I were beyond Schoolboy's Tower and Nevison's Nick the walk assumed a different feel and with the first spell of concentrated climbing done we could relax into the walk. On an airy crossing of limestone fell, heading from south-east to north-west on the line at around the 280 metre height level across the top of Giggleswick Scar. I looked down to below the scar. "At last I am here" I thought to myself, thinking back to the many times I had looked up at the scar with salivation when driving along the B6480 wishing I had been up here instead of driving along the tarmac strip, most of those times commuting during hours of work. The path along the way was fringed with the golden ferns of this time of year, making a lovely colour contrast to the creamy white of the limestone outcrops shielding us to our right. Occasional limestone pavements demanded our attention. Picture perfect. 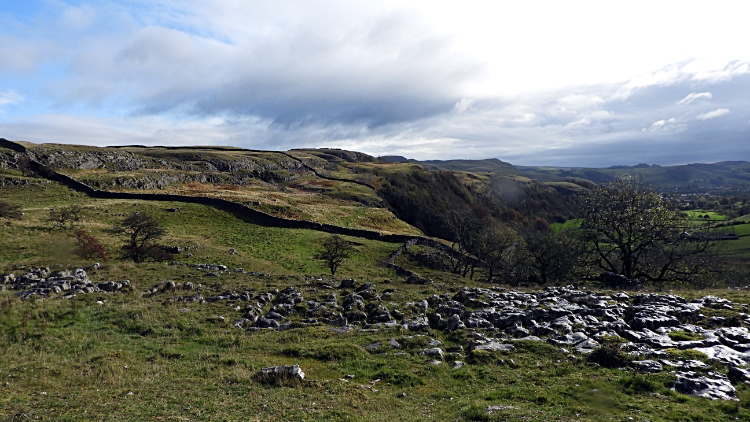 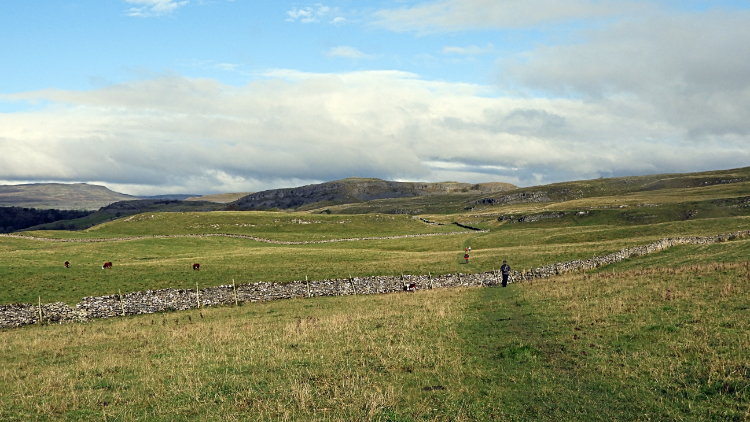 The lovely path leading to Feizor

The walk on top of Giggleswick Scar was a mile long. A wonderful mile of walking. Despite a short sharp shower of cold coming of winter rain which had not been forecast but which was acceptable for the rainbow it provided all was ideal. Some cloud had accumulated for a while around the time of the wetting but that was now off on its way to somewhere else. All looked fair as we reached the north-west tip of Giggleswick Scar and turned course, now heading due north over a run of three fields of pasture towards Feizor Thwaite. Young Hereford calves were in one of the fields, some standing still in a line and watching us most curiously as we walked by. The path itself was typical of limestone land, perfect cropped short grass making our progress effortless. The views were not half bad either. It was a joy of a walk from the line of fields to Feizor Thwaite and then to the hamlet of Feizor by way of lush open pasture which the local sheep were enjoying as much as we were. 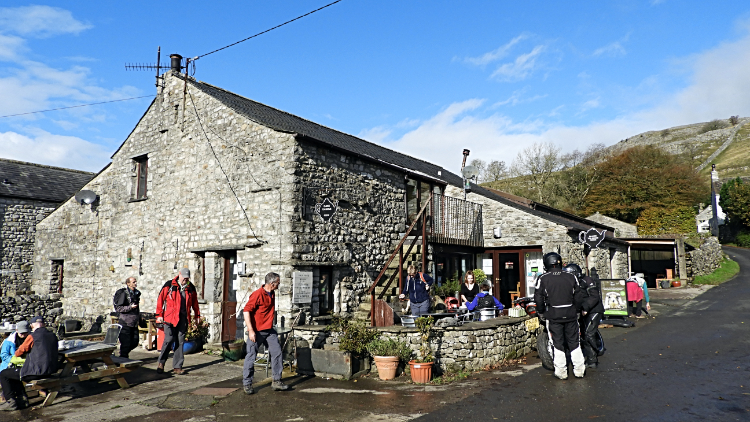 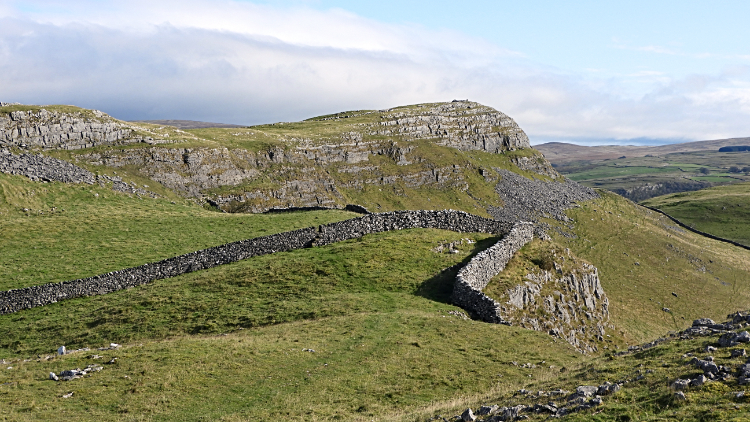 Feizor is such a pretty place and very popular too, most so for the popular Elaine's Tea Rooms. There were a few people enjoying refreshments at the establishment as we arrived and more came as we sat enjoying some of the cafe's fare ourselves. There were other walkers, plenty of cyclists and a few leisure motorists in the mix and despite November being just one long week away all the outside tables were taken. We had bagged a select one ourselves. While there Tim and I had a slice of fruit cake and a cup of tea each while Dave had Eccles cake and coffee. Sufficiently fuelled we left the cafe in good spirits by beginning the second of the two climbs of the walk, this time from Feizor to the shapely limestone hills of Smearsett Scar. 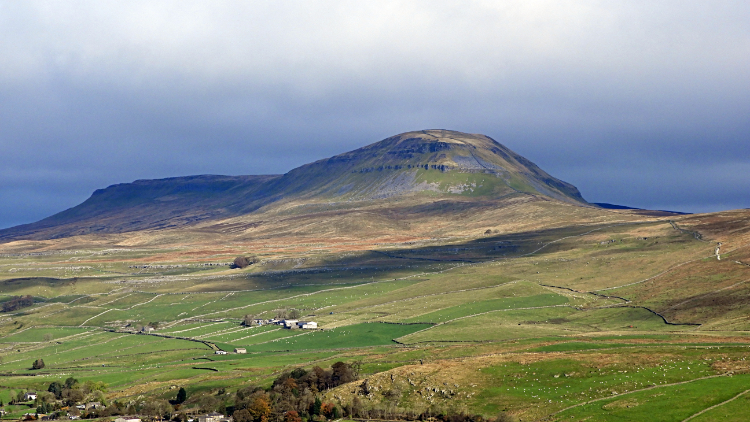 View of Pen-y-ghent from Smearsett Scar 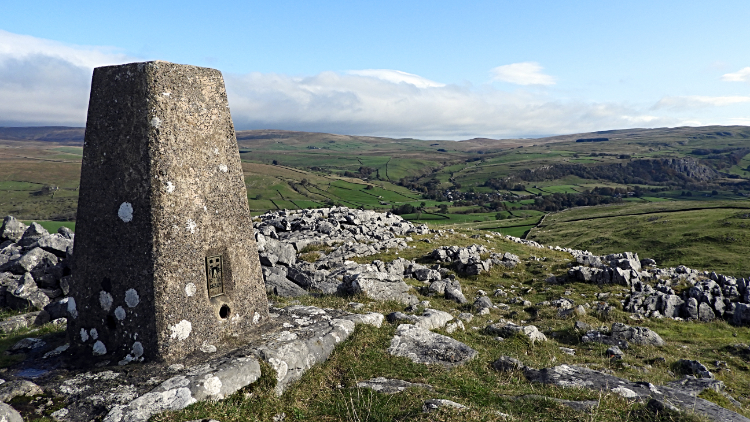 The climb was one of eighty metres for Dave and Tim while it was one of 140 metres for me. That is because my two chums kept to the path leading through the gap between Smearsett Scar to the north and Feizor Thwaite to the south while I was seduced by the irresistible climb up to Pot Scar which would lead me eastwards to Smearsett Scar. I did not know what to expect but after the hard climb of erratic limestone scree I was rewarded with some sumptuous views afforded by the top table. Smearsett Scar was in itself impressive. As was the magnificent long distance view over wonderful limestone land, some of the best in all of the Yorkshire Dales. The tour de force though was the brilliant view of Pen-y-ghent, a little over four miles away in the north-east. I could make out all the routes leading up to the south face of the mountain including my most used one from Horton in Ribblesdale via Brackenbottom and most clearly the Long Lane track leading up from Helwith Bridge to its joining with the Pennine Way National Trail path at Churn Milk Hole. Most impressive though was the whole picture of rising ground leading from the Ribble Valley to the top land. Over two hundred metres of rise before Pen-y-ghent is even considered. It was truly an awesome view and the other views attainable from the trig pillar set at 363 metres on Smearsett Scar were not bad either. Including the one across to Malham Moor with Stainforth Scar and Rye Loaf Hill clearly standing out to the south. I could have stayed for ages taking it all in but I had to go. I headed down to rejoin the boys, taking a last look at the beauty of Smearsett Scar on my descent. Then we walked down to the next part of the walk which was already exciting me. 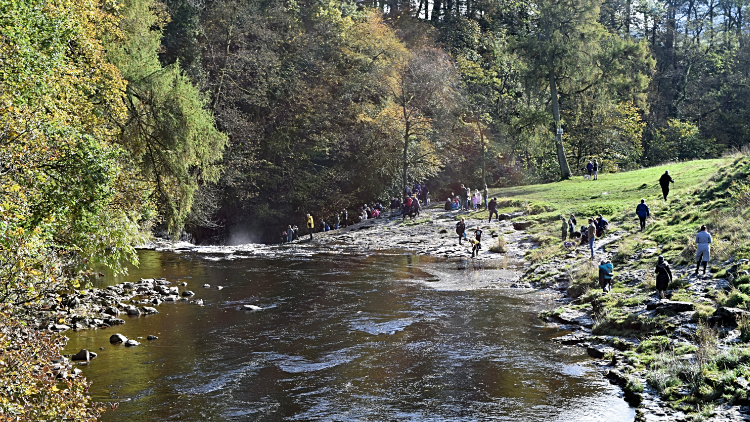 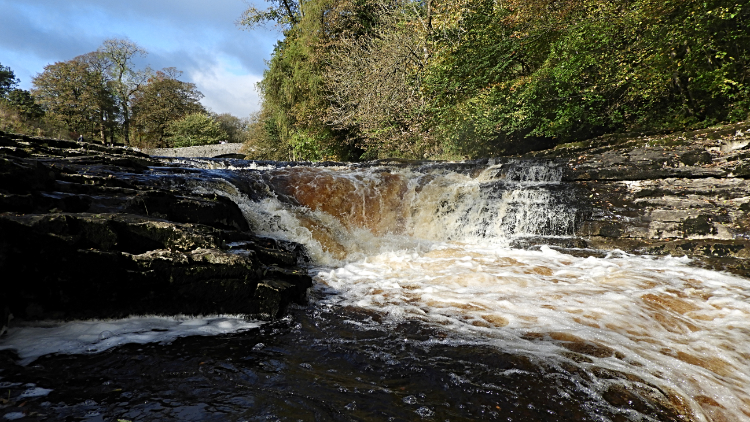 We had the walk to ourselves so far. Bar the refreshment break in Feizor. But now, as we walked down from Little Stainforth to the River Ribble we began to meet other folk. First up, a mature couple climbing from the valley towards Smearsett Scar and Feizor. They were making quite an effort, the climb almost as steep as ours had been at the quarry in Giggleswick earlier. Then family groups walking down the road from parking spots in Little Stainforth to the river. One awkward car heading up the narrow road shuffled us all to the roadside. A little blip on a good walk. That was quickly forgotten when we reached the bridge and walked along the riverside to the beauty of the waterfalls at Stainforth Force. I have visited these impressive minor waterfalls quite a few times, hoping for a repeat performance of Salmon leaping at Stainforth Force which I witnessed once in the 1990's. Not this time though. Despite it being Salmon leaping season we missed a fish jumping out of the water on its way to its particular spawning area. However the rush of peaty brown waters washed down from recent rains on the gritstone moors around Ribblehead in the north made for a bewitching watch. We stayed around with the crowds which had gathered by the falls for ten minutes or so, enjoying our carried snacks while doing so. 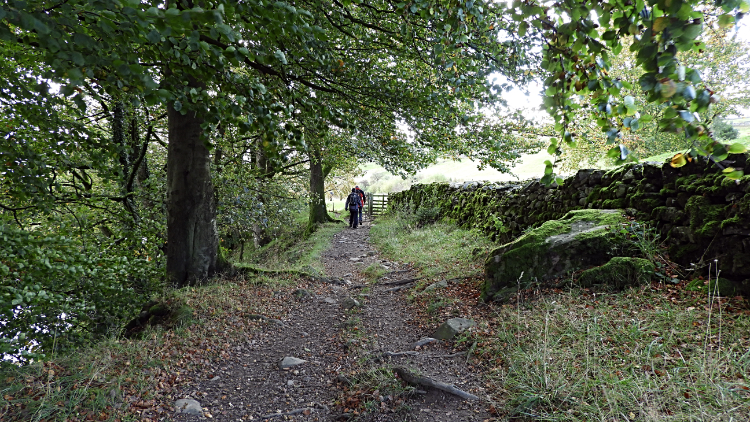 Following the path leading back to Giggleswick 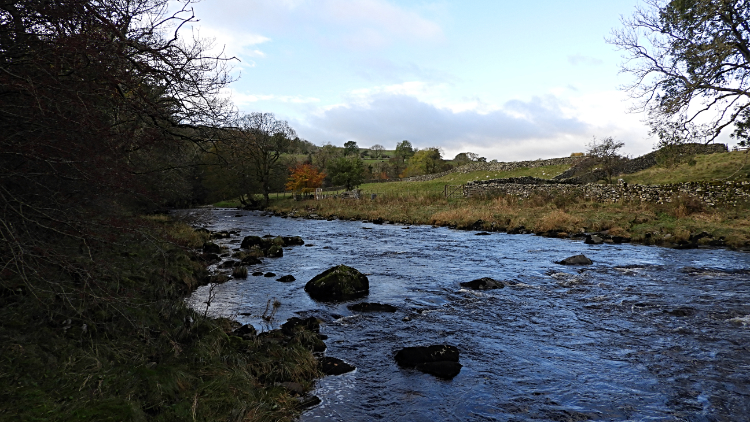 Following the path leading back to Giggleswick

The walk back from Stainforth Force to first the hamlet of Stackhouse and then back to where our vehicles were parked in Giggleswick was a leisurely affair. First up was a riverside ramble through a copse, across a field beside a camping and caravan site, through a replanted woodland and then past the site of an old mill. All beside or on a bank above the flowing River Ribble. Then we reached a weir in the river which marked our departure from the Ribble. e headed along a path leading directly to Stackhouse. A sign on a wooden five bar gate read "Any person who omits to shut and fasten this gate is liable to a penalty not exceeding forty shillings". At one edge it showed LNER and the other edge showed 090. Or 060. Were we walking on a spur of the nearby Settle to Carlisle railway line? Next, a delightful wee ramble through Stackhouse though we could have stayed on the Stainforth to Giggleswick road which we had to follow for a couple of hundred metres to reach a gate leading up a field which in turn led to the pretty tree lined lane leading us back into Giggleswick. All finished. What a fantastic walk.