Summary: I cannot think of a better way to spend an hour walking than in pretty woodland, especially in springtime when Bluebells are in flower and when Wild Garlic is flourishing. It is one of my highlights of the walking season. Skipton Castle Woods is a fine place to walk all year round but in May it is just spectacular when the scent of Wild Garlic fills the air, complementing the Bluebells and other spring flowers which make an appearance. Come here when you can; you will not be disappointed. 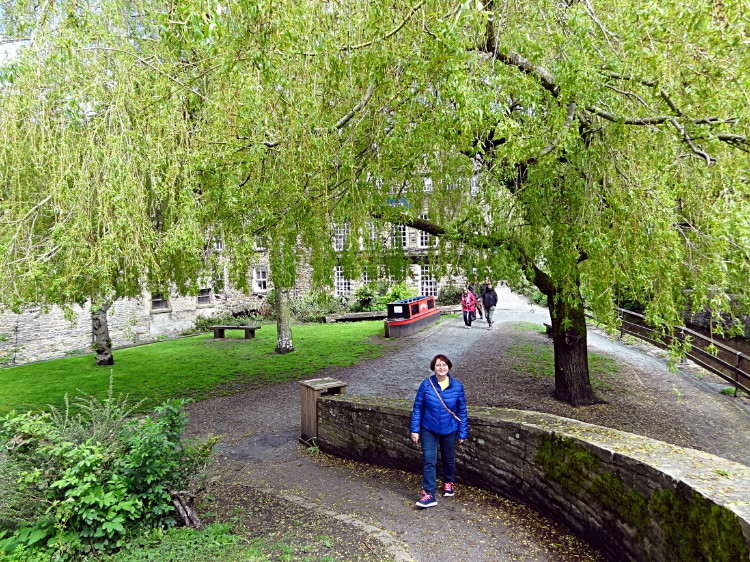 The way from Mill Bridge 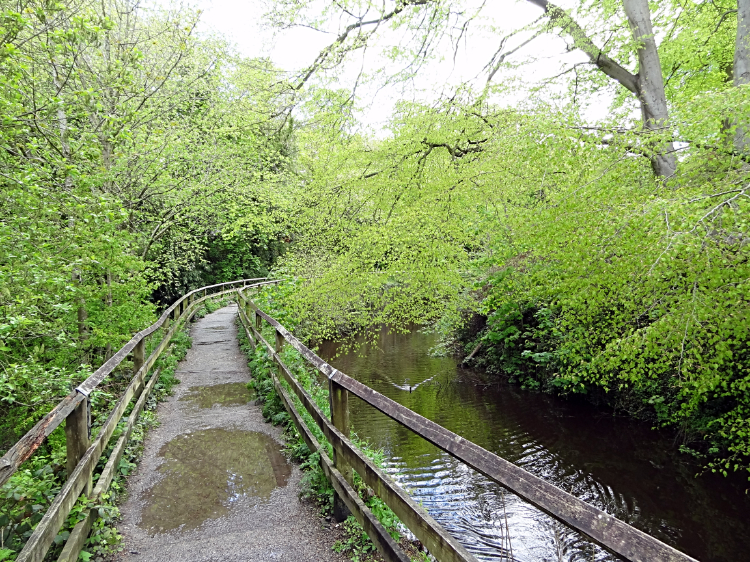 The walkway to the woods

Being a North Yorkshire man I though I knew most things about Skipton and especially the walks to be found around the town but I was mistaken. I was surprised when I first discovered Skipton Castle Woods by chance during the designing of my Dales Celebration Way long distance path in 2004. I was enraptured by the woods then and since the first time I had returned to enjoy a walk through a few times more. But surprisingly I had not taken my wife Lil. Her birthday this time around gave me the perfect opportunity to share the delights of the woodland with her. It was a bit damp from early morning rainfall when we arrived to set off on the walk from Mill Bridge but the rain had stopped. Puddles on the walkway approaching the woods had to be sidestepped but all was good with the trees edging Eller Beck in the first fresh flourish of springtime foliage. Always an uplifting sight. And by looking high to our right, above the impressive walls of Skipton Castle, we could see glints of blue sky breaking the clouds. Sunshine was coming. 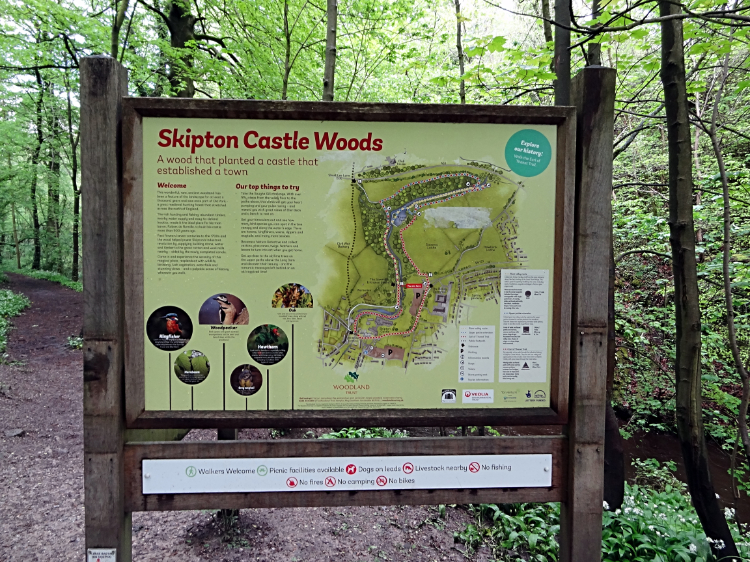 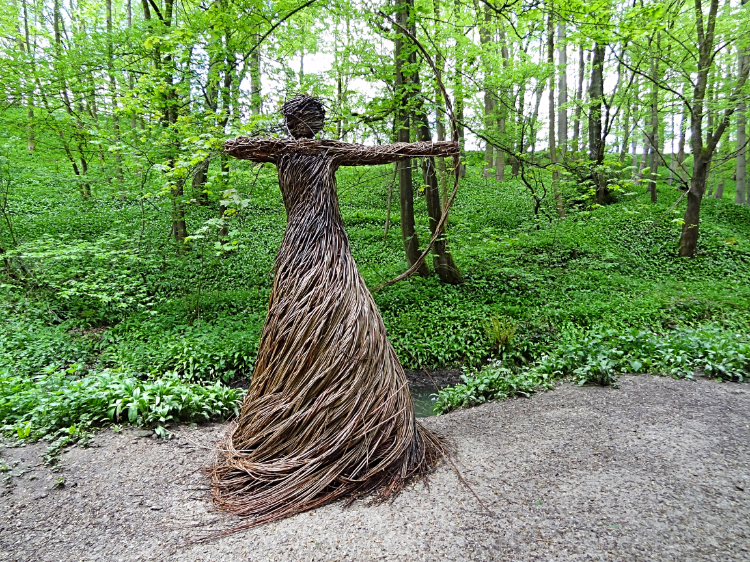 Spirit of the Medieval Huntress

After following the access path and after crossing a footbridge over Eller Beck to reach and pass the buildings of the old sawmill we arrived at the woodland via the appropriately named 'Sawmills Entrance'. Once in the woodland we read an information board telling us what we could do and expect on the walk. For example we could undertake the Sougha Gill Challenge, a fifty step climb from the valley floor. Which Lil partly did. And we could hope to see many bird species including Heron, Kingfisher, Wren, Dipper and Wagtail. Seeing those five lovely species was a nice thought. Also, we could play nature detectives by collecting catkins, pine cones, twigs, feathers and leaves to make into art when home. If only we had the grandkids with us. The walk in the beauty of the woodland was enough for us which started by walking by an impressive wood art feature, a figure of a lady archer, fashioned from willow. It is called 'Spirit of the Medieval Huntress' and created by the very talented local artist Anna Cross, the Willow Weaver. 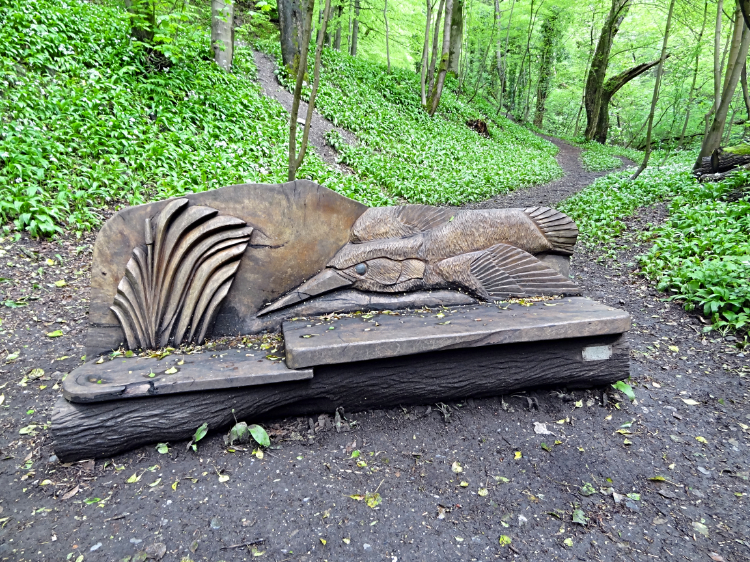 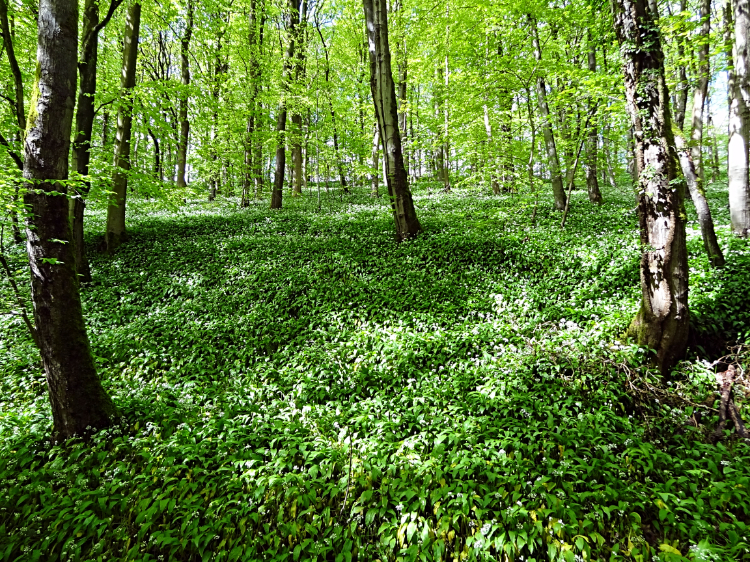 Our walk continued on the valley floor path towards the heart of the woods. Immediately our senses were filled with the dual springtime delight of first the visual display of flowering Bluebells and second the enticing smell of flowering Wild Garlic. The high banks each side of us were covered in flowering garlic which was an exciting awesome sight and smell spectacle, especially as the sun was now winning the battle with cloud in the skies above and beaming directly down with glints through the new leaf trees making natural spotlights. Natural spectacle was topped up with more lovely wood carvings on show too, such as a Kingfisher carved into a bench. 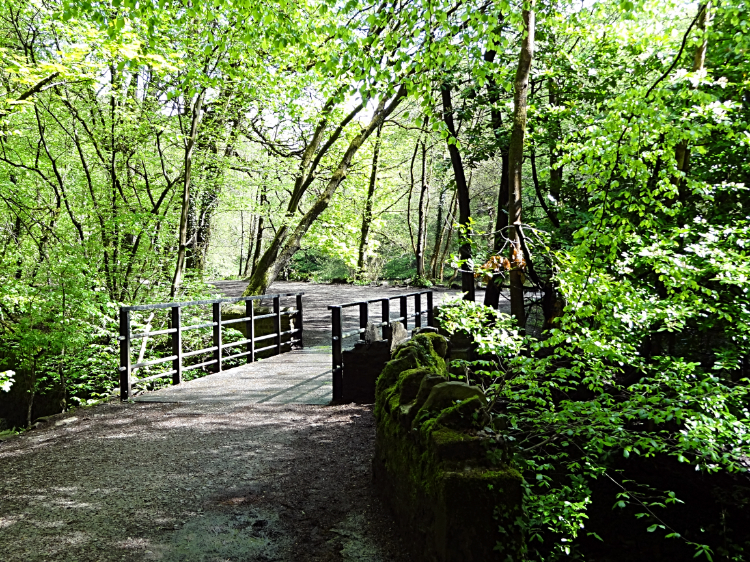 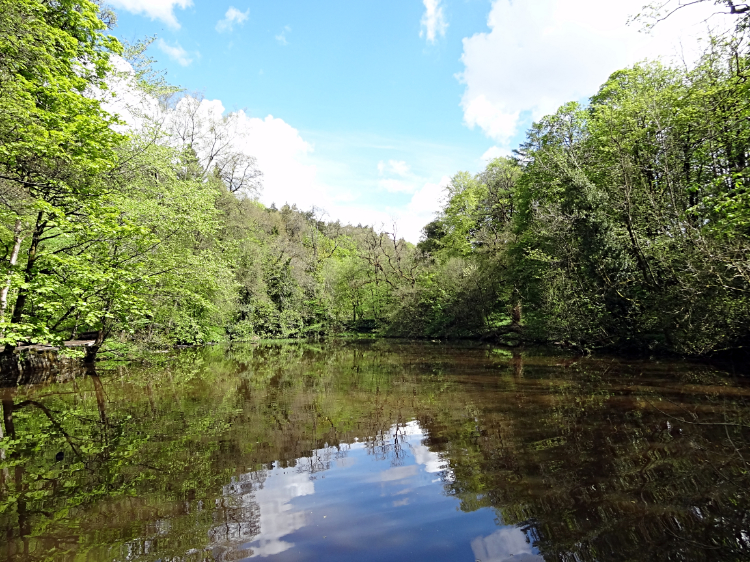 Soon Lil and I reached another bridge leading over Eller Beck, this time a substantial build made for footfall and for service and woodland management vehicles too. Crossing from west side to east side of Eller Beck the bridge led us to the peaceful setting of Round Dam Lake. Some people were sat on seats looking over the idyllic small lake which was looking beautiful in the sunshine. Lil and I stood by the lake for a couple on minutes too. Taking it all in. Then after the break in action Lil felt athletic enough to do the fifty step Sougha Gill Challenge. She got half way up before I called her back, saying "It goes nowhere, you will have to come back down anyway". That was good enough for her. 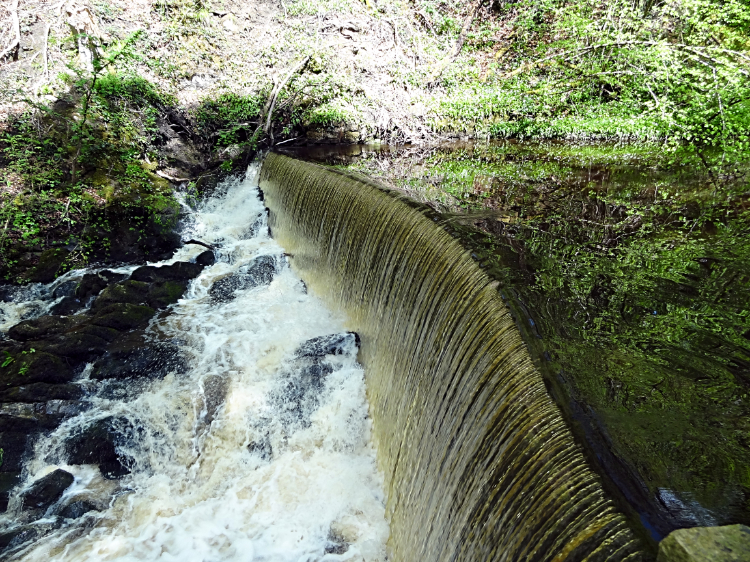 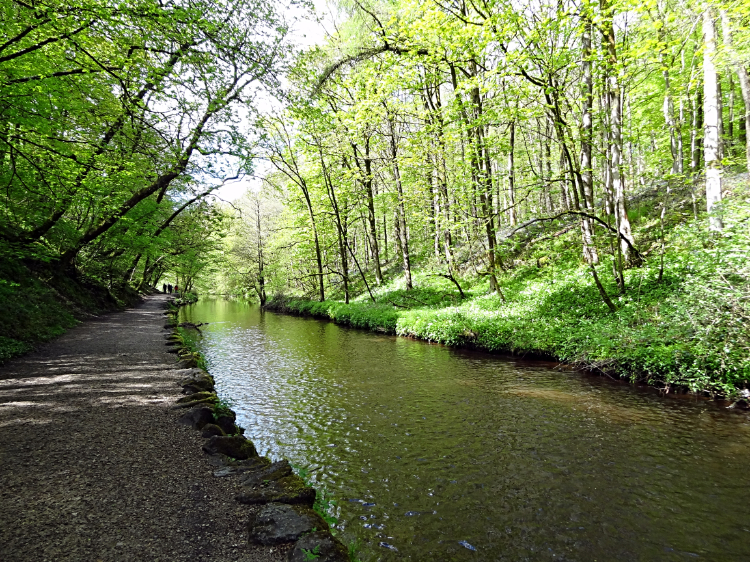 Round Dam section of Eller Beck

Near the athletic Sougha Gill steps and adjacent to Round Dam Lake we found a weir in Eller Beck which is the controlling leveller of Round Dam, the stretch of Eller Beck we were now approaching. Another information board confirmed this stating "Eller Beck weir: At the end of Long Dam Eller Beck cascades over the weir where it is joined by water from Sougha Gill, a craggy limestone stream". The information board also showed the old redundant mills we had passed on the way, including High Corn Mill near the start at Mill Bridge which is now shops and business units and High Mill which was located near the Old Saw Mill. Information banked, we carried on with our walk, following Round Dam to the far north-east end of the woods. Towards the end the calm tamed Long Dam reverted to untamed Eller Beck, waters now gushing and tumbling over rocks. We noticed we were also climbing slightly. Before we left the back side though I chatted with two men floating an odd looking boat in the beck, a boat tethered to ropes held by each chap, one on each bank. "Odd looking boat, what are you up to" I asked. "Measuring water flow. It is a flow meter utility" replied the chap nearest to me. 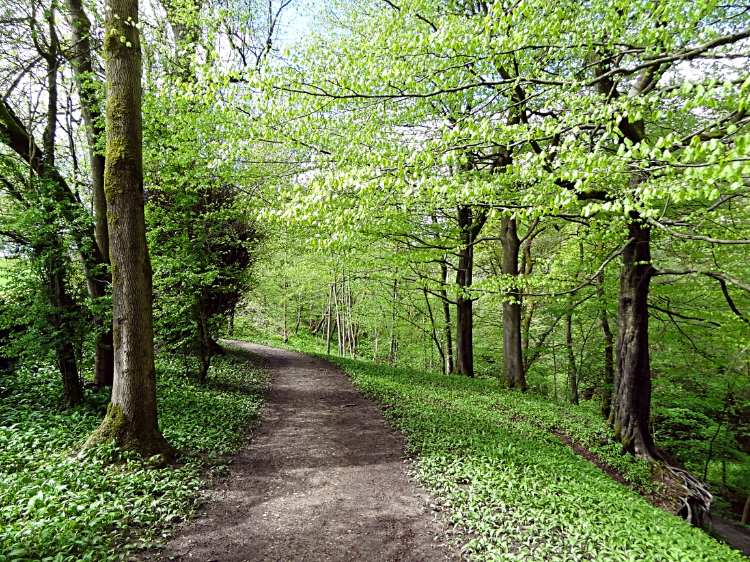 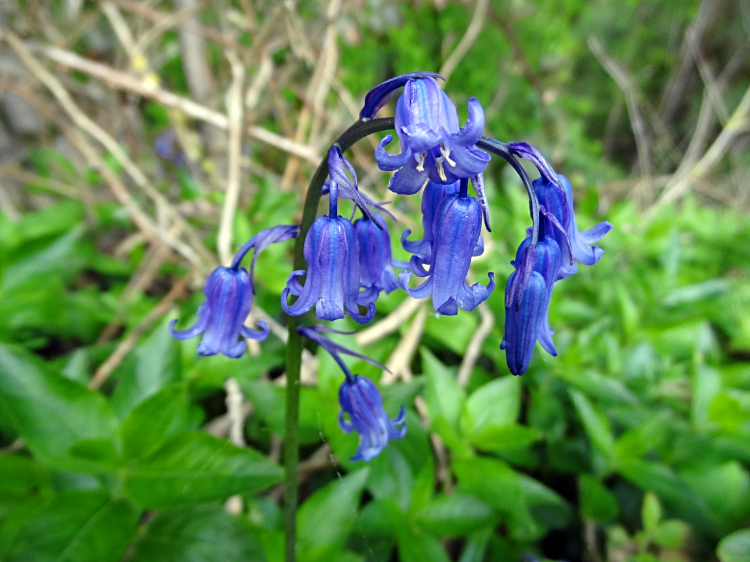 From meeting the flow measuring men we climbed from the beck side to the high path on the south side of the woods. Height gain was just about ten metres but it made all the difference, the obvious one being the vast increase in light intensity. No longer shrouded by a canopy of tree tops we could fully enjoy the warmth of the mid May sunshine. Which was warm indeed, quite a few degrees warmer than when we were on the path below. Bluebells were a bit more prolific up here too. Most places in the wood were dominated by the Wild Garlic. The contrasts were an enjoyable aspect of this walk. Other springtime flowers made a show too, including lovely Red Campion. 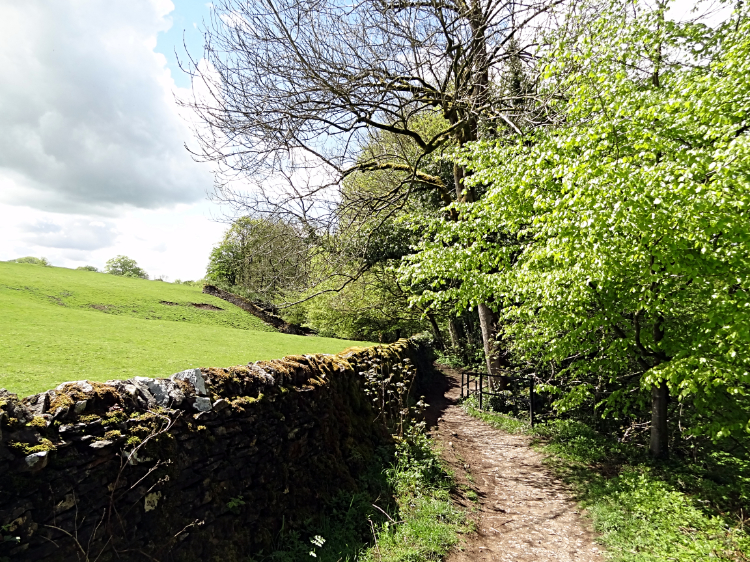 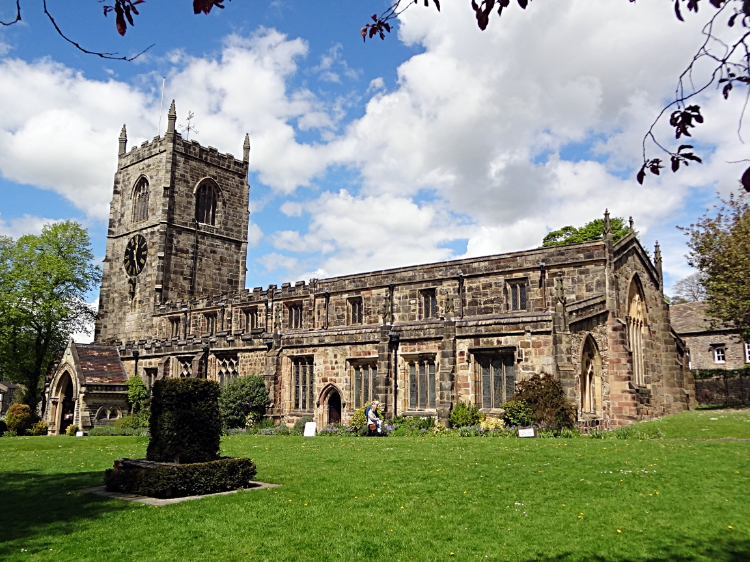 Another joy of the high path was the view over the impressive drystone wall to the fields of Storems Laithe. Sheep grazed idly while their lambs snoozed in the sunshine. There was no haste up here at all. Eventually we came to the end of the path which led us around the north perimeter of the castle and a long stay car park to the roadside castle side path leading down into Skipton town center and Holy Trinity Church. It was a lovely finale to our short and extremely enjoyable walk as it led us towards the cafes. One of which we chose to enjoy our post walk lunch. Perfect.