Summary: The walk enters its longest stage. Begin by leaving Hawes and visiting one of the largest single drop waterfalls in the country at Hardraw Force. Relax here for a while as the walk continues from Hardraw to the Pennine Way footpath up and over Great Shunner Fell. From the top the walk affords magnificent views into Swaledale. The walk drops into this fantastic dale at Thwaite. The walk continues along the valley to Muker and then continues along the valley via Gunnerside to Reeth.

The Walk: Steve is an exceptional walker. Over the years I have had the pleasure of being his friend he has usually set the pace on the walks we have shared together. As with me, walking is his passion and when we are in each others company we always make sure we can get some walking in. The walks usually include some climbing in which he leads followed by a descent and then some flat walking where we walk together sharing a laugh. That is unless I am suffering (or Dave when he is with us) and grumbling. Today was the day Steve proved to me he was human after all. It was quite a day. Before we start today's walk I must mention last nights food. We had the best fish and chips for ages from the fish and chip shop in Hawes. The fish was served to us fresh out of the fryer and it was simply superb. It was the best meal of the walk so far so if you're in Hawes try the fish and chip shop out. Now let us get back on the Dales Celebration Way. 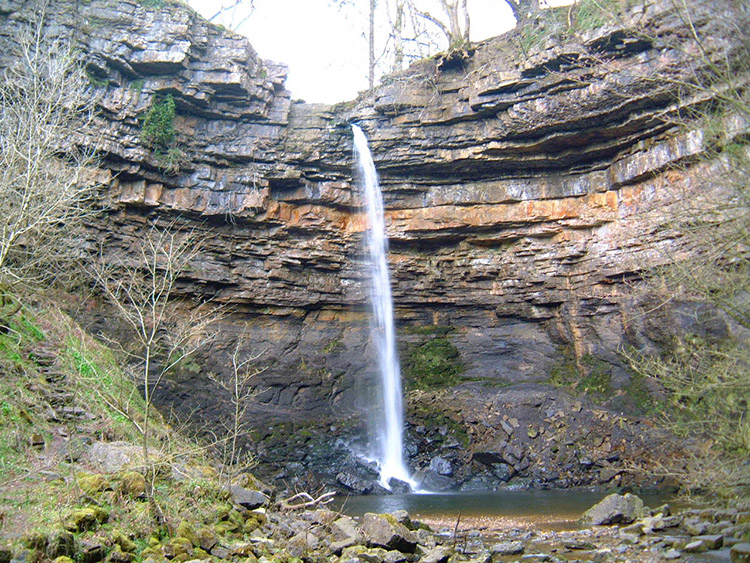 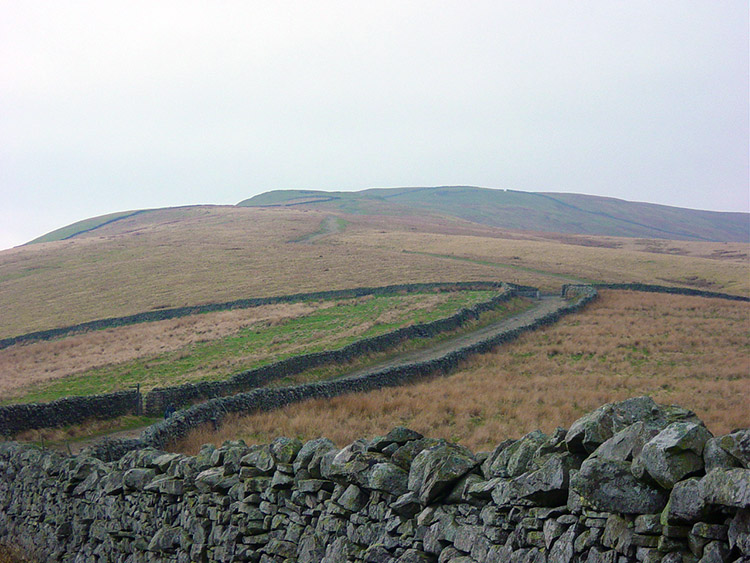 The way from Wensleydale to Great Shunner Fell

Hawes marked the half way stage of the walk. Four days are past us and four days lie ahead. Today's leg from Hawes in Wensleydale to Reeth in Swaledale is the longest at about 20 miles. It was overcast and drizzling (we had to get rain eventually) as we left Hawes and walked through the town and out over Haylands Bridge towards Hardraw. As we walked to the village while I enjoyed the benefits of a slight Hawes hangover I told Steve about our first highlight of today. Hardraw Force is an impressive single drop waterfall that descends 100 feet and is claimed to be the largest above ground single drop waterfall in Britain. It was used as a film location in Kevin Costner's film 'Robin Hood, Prince of Thieves where he was seen swimming in the nude by Maid Marion. Steve could not recall having ever been to Hardraw Force. He accepted my praise of the waterfall in it's splendid closed gorge setting and looked forward to seeing it. 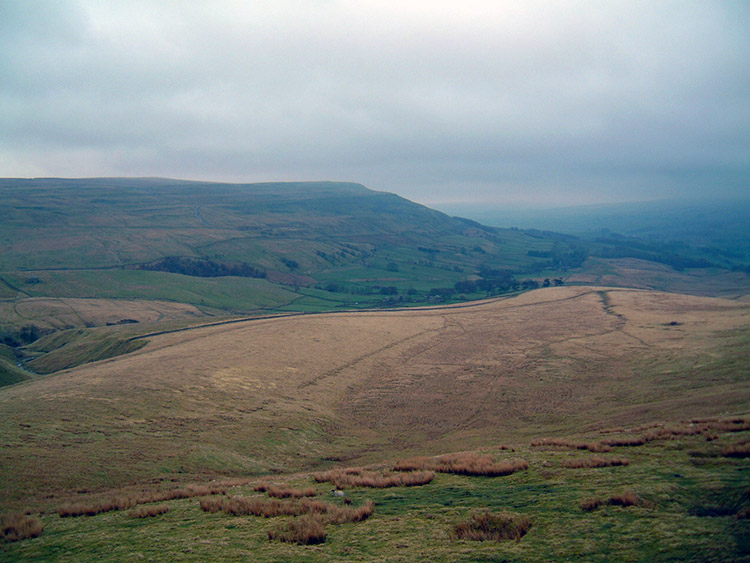 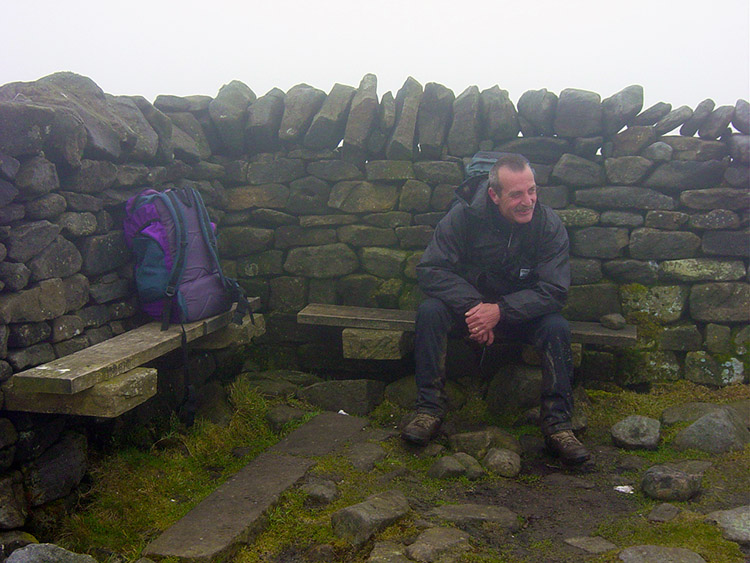 A sombre Steve at the summit of Great Shunner Fell

We reached Hardraw and walked through the Green Dragon Inn (after paying £2 each) which one must to access the force) We began our walk along the impressive closed gorge. The first disappointment of Steve's extraordinary day was just around the corner. As we rounded the final bend I expected to hear torrential gushing. I did not. Then as we got further round the waterfall came into view. What we saw was mediocre. "That's the largest waterfall in England? It's no more than a trickle" Steve exclaimed. I couldn't argue. After the build up I had given Hardraw Force it was a tremendous letdown. The recent dry spell had reduced the waterfall to a mere dribble. It was more like the escape of water from a small burst water pipe. The length of the drop is impressive and the setting is fantastic so Hardraw Force is always worth calling on. I only hope you have a better spectacle to enjoy than we did. It seemed a waste of the two quid. We trudged disconsolately back through the pub and resumed the walk. From Hardraw the route took us up Great Shunner Fell. The path is still part of the Pennine Way which we joined yesterday when we reached the Cam Hill Road. It is the only path in the vicinity linking the two dales so we had no alternative. We headed up. As usual Steve led with a purpose in reaching the top expediently. The drizzle was abating but it was still overcast and the cloud hung low. As we climbed we headed into it. Soon we reached Hearne Edge. We couldn't see far now. The walk from Hearne Edge to the top at Great Shunner Fell is only half a mile. It seemed an eternity. The fell is boggy on top and because of Pennine Way usage the path has being laid out with heavy slabs. It was tough and Steve began to get disgruntled as we forged on to the top. I took the lead while he donned his coat. The cloud was heavy up here and it was cold. I struggled on up to the Carrick not being able to see any distance ahead. Where the hell is it? It did seem to take for ages and then finally I reached the stone shelter at the top. As I rounded the shelter to find a windbreak I was startled. A large crow had been sheltering in my choice of spot and flew out with a squawk straight past me. I was too jiggered to worry about the bird. I sat for a while and had a drink while I waited for Steve to appear out of the cloud. Soon he did. 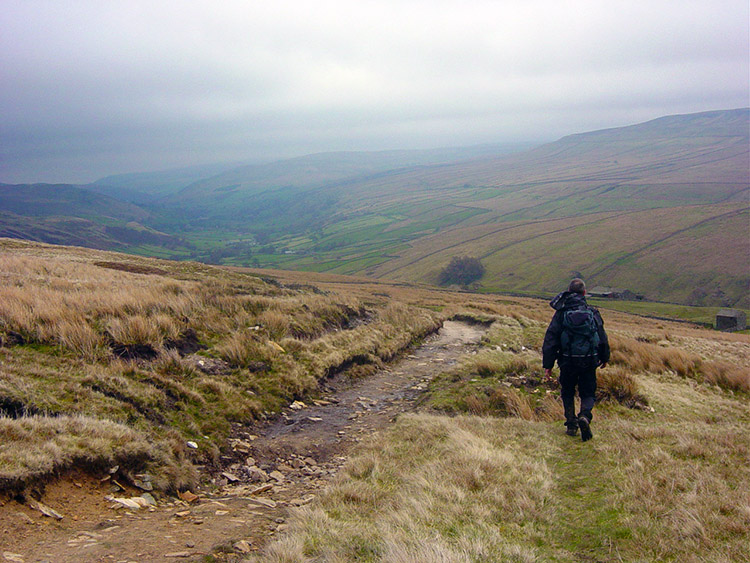 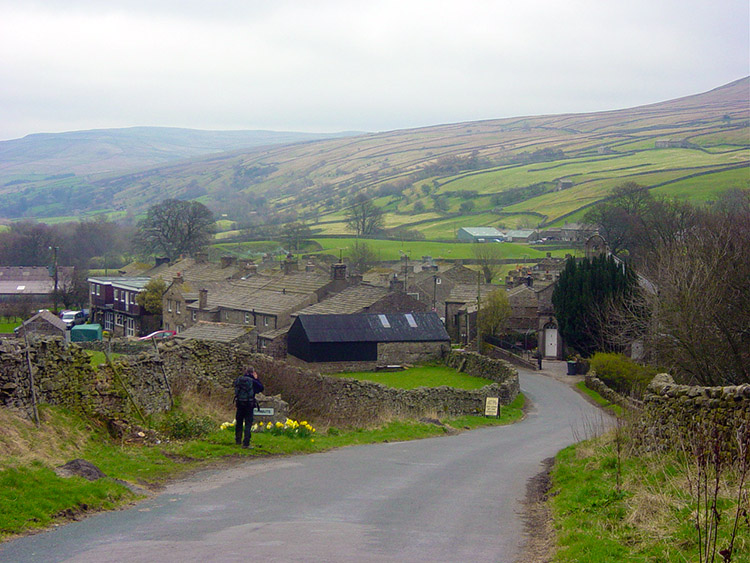 Steve was beginning to suffer. The cold and poor visibility were disheartening and something we all suffer as walkers from time to time. We were both looking forward to the expected cloud break but there was a further problem for my pal. He hates walking on hard ground and the heavy stone slabs were getting him down. After a short break on the top we started to head down for better weather. To Steve's discomfort there were many more slabs to come. I bounded down the hill as I could see the breaks in the cloud ahead of us, it was sunny in Swaledale. Steve laboured on behind, he was clearly not enjoying himself. After some time I waited for him and we reached a walker resting on his ascent from the opposite direction. Steve felt obliged to tell the walker "It's crap up there and this slab path is a pain". He went on "Surely they can think of something better than this". The walker nodded in polite agreement. Steve's irritant path continued but eventually gave way to proper fell walking. However for this day the damage was done. We finally walked clear of the cloud into a nice spring day and descended into Swaledale at the village of Thwaite. We arrived in the lovely little village of stone houses and ambled on. The walking was now entirely flat on the valley bottom and we began walking alongside the River Swale as it flowed gently to Usha Gap Bridge. We then crossed pasture fields to Muker. From here a decision had to be made, a decision already decided by Steve who was dictating the rest of the course of today. I had originally planned to walk from Muker up Swinner Gill and onto Melbecks Moor. From the Moor we would walk along Mill Gill past the disused mines at Old Gang Smelting Mills before reaching Surrender Bridge and walking on down into Reeth. The course of events on Great Shunner Fell had swayed Steve into taking the alternative low level course along the valley floor. We had already done a fair deal of work today so I agreed on the revised course of action. Both alternatives have their allure so I agreed on the river walk. 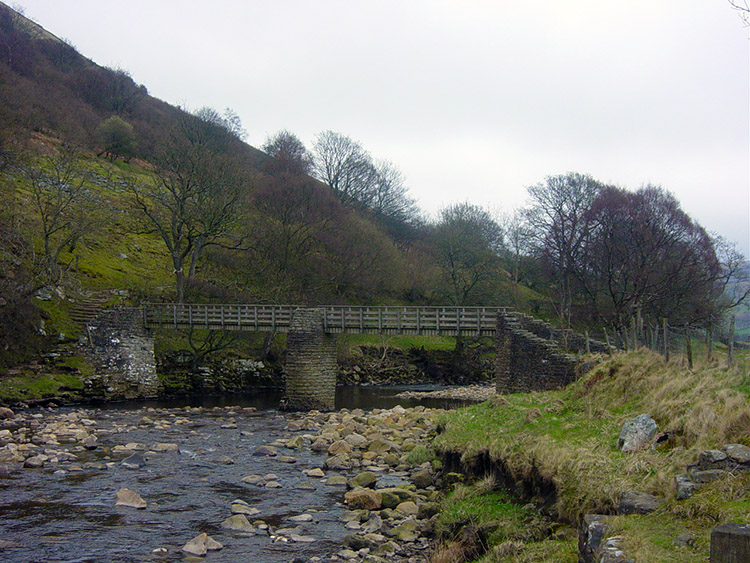 Footbridge over the Swale between Thwaite and Muker 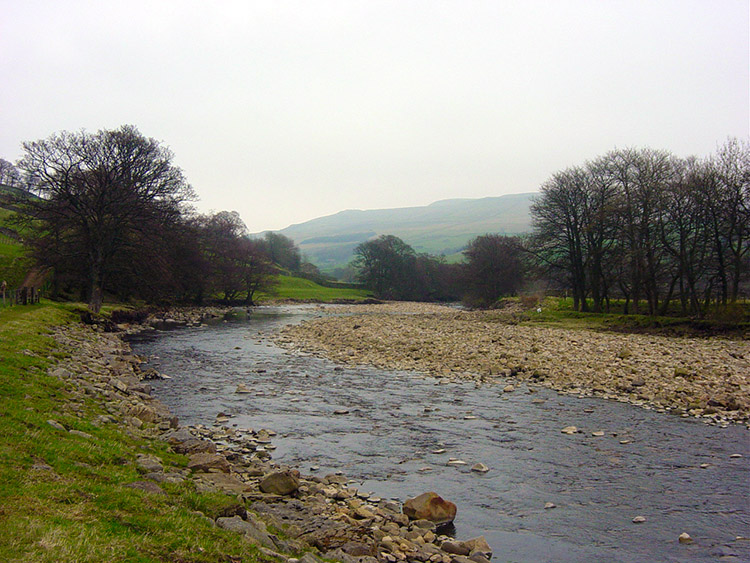 We left Muker by tracking to the riverside and crossed over to the northern bank at the Ramps Holme Footbridge. We were in familiar surroundings now having done this exact route in reverse ten years ago on the Coast to Coast walk. We passed Calvert Houses that are all being renovated and walked along pleasantly into Ivelet. We then began the 13 fields crossing to Gunnerside. I always do the count to add interest to this section for their are 13 paddock sized fields between the two villages. "One down, twelve to go"...."two down, eleven to go" I say repeatedly. To the relief of Steve's ears we reach Gunnerside. The walk continues eastwards on it's course to Reeth alongside the river except a few necessary detours onto road. When on the riverside we note the damage done by erosion and by Rabbits. 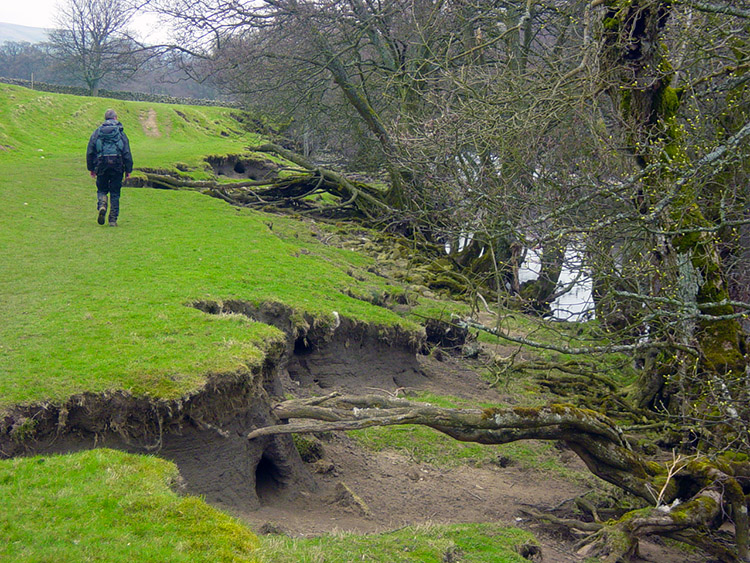 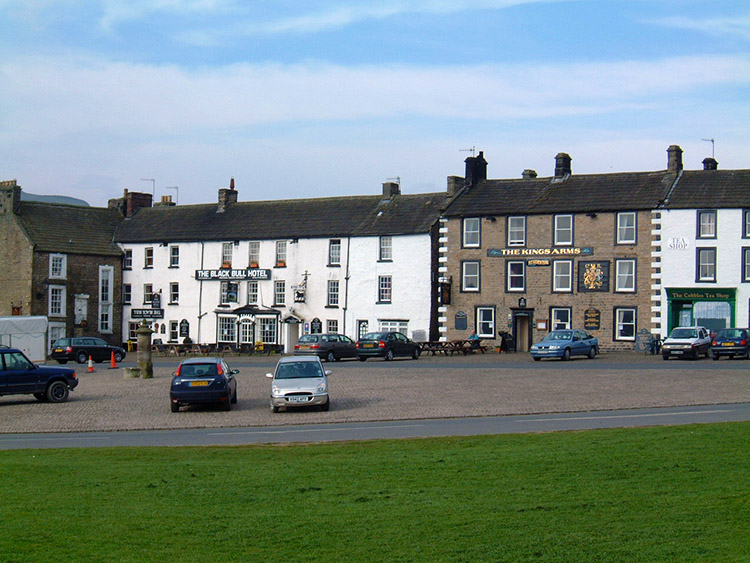 The north bank of the Swale is collapsing dramatically in places and trees are falling into the river. Rabbit warrens are everywhere littering the area accelerating the damage. New copse plantations are being established to replace their mature casualties. In some places the collapse of the bank is quite alarming. After passing Long Row I keep trying to motivate a now flagging companion by stating miles to go. He soldiers on but is unusually glum. Twenty tough miles have been done now and I am pretty fatigued too. At last we reach Hutton Garth. There are only a few fields to go and Reeth is in sight. We take a break before walking into Reeth. We make our triumphant entry and after some searching (the accommodation is not where it is shown on the map) we arrive at our digs. The owner greets us and makes us a pot of tea. Steve just wants to go to bed but stays politely for one cup. Then he goes to bed. He did recover to go out in the evening.