Part 5: Kendal to Bowness on Windermere 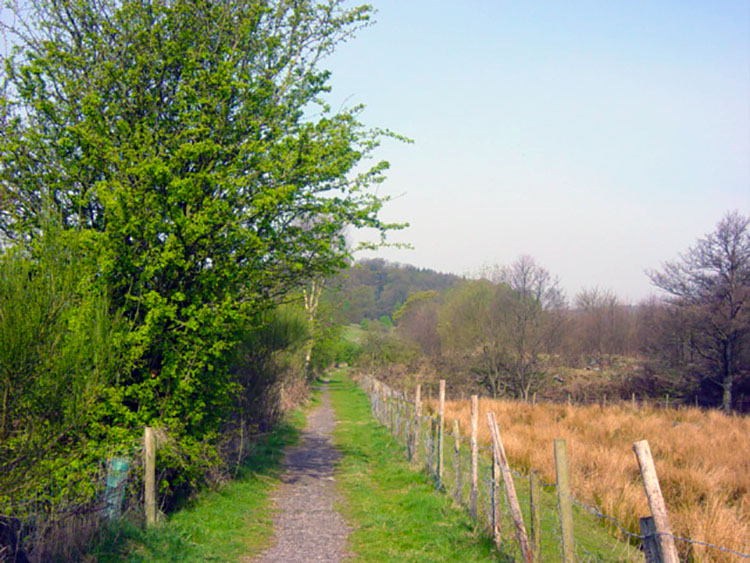 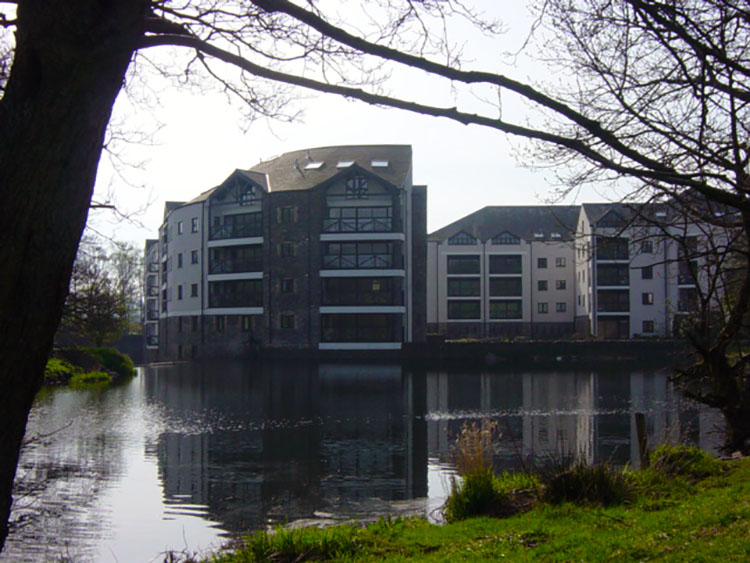 And so the finale. This last day was spent alone as Steve was now back home in Somerset. I left my digs in Kendal on yet another gorgeous sunny day. How lucky can one get, the weather has been uncanny this week. The first couple of miles I spent following the Burneside Road to the village and my rejoining with the Dales Way path. A pretty uneventful section but necessary as any long distance walk requires you to walk from start to finish without the aid of any kind of transportation. The walk on footpaths to Burneside is a nice little stroll with a climb out of town that gives nice early views of Lakeland. I cut right at a junction in the village to regain the path at Burneside Mill and walked through a few pasture fields to the hamlet of Bowston where I meet the River Kent. After a short while I arrived at Cowan Head. Here there was a major Mill complex which has been converted into an attractive development of flats on the riverside. It is a lovely setting, a little two quiet for my busy way of enjoying nightlife, but there is no doubt the place is in a very attractive setting, as I am to discover. 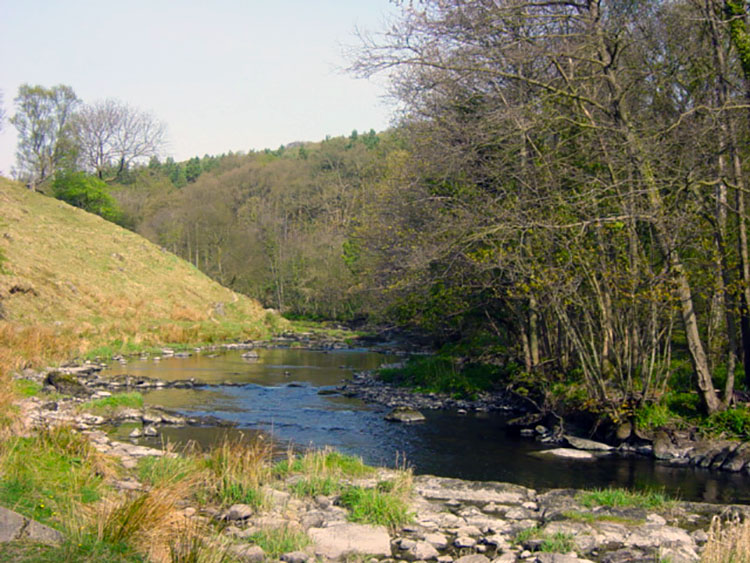 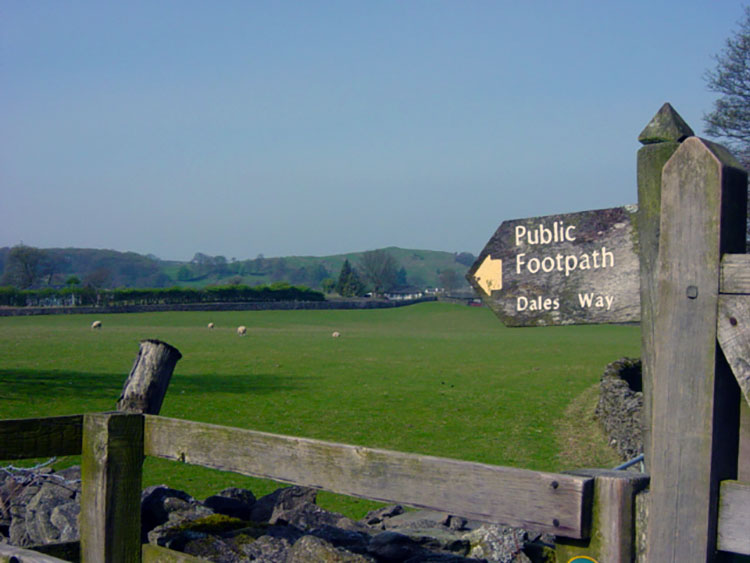 Approaching Staveley on the Dales Way

The next mile is exceptionally nice riverside walking with the waters of the River Kent dashing their way over rocks. The far bank is lined by trees. I meet a fellow Dales Way walker on a time out taking it all in on the riverside. Good choice. I chat with her for a while to talk about the beauty of the walk. We are in agreement that this walk is indeed a short but great long distance path. After our brief meeting I continue along the river on a stony path over and down rocky ledges until I reach more verdant fields as I near Staveley. At the small town I am forced to follow the main road for a short distance but a path is conveniently provided away from the road edge. In Staveley the Dales way leaves the road and cuts across some paddocks past a little complex of houses called Moss Side. This is not like the Manchester namesake but a quiet spot. After Moss Side the way crosses another main road and climbs up past Field Close skirting a delightful little copse set on a small rocky outcrop. Once at the top of a small hill I dropped down to New Hall Farm from where I followed a road to Fell Plain Farm. At the T junction near the house I stayed on the road and made a stiff little climb, enjoying lovely views before leaving the road. the road is left behind by turning left and climbing up a little further along a walled bridleway. 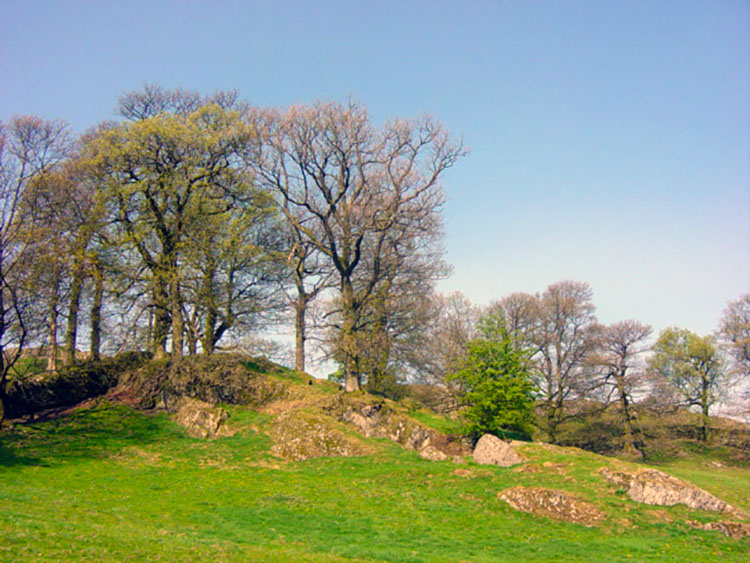 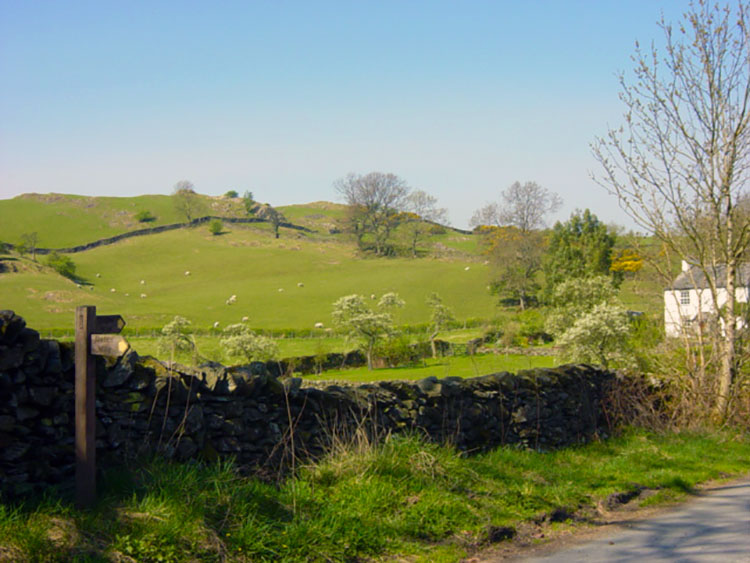 The bridleway took me into Little Lakeland, a rough undulating landscape where numerous gorse bushes were in vibrant full bloom. Rocky outcrops were all around me, I was in my element during this section. There were numerous small conifer plantations to add to the scenic effect on this fantastic little section and it was never really flat as I bobbed up and down over the small undulations of this area. The views all around were an inspiration to me as they should be to anyone who enjoys the pleasures of countryside walking. After just over a seemingly very short mile I left this lovely part of the walk as I climbed up to Outrun Nook Farm. 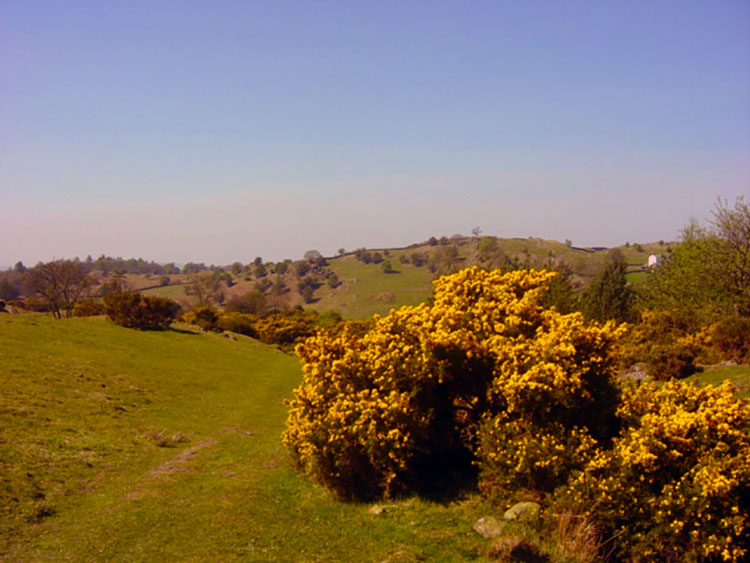 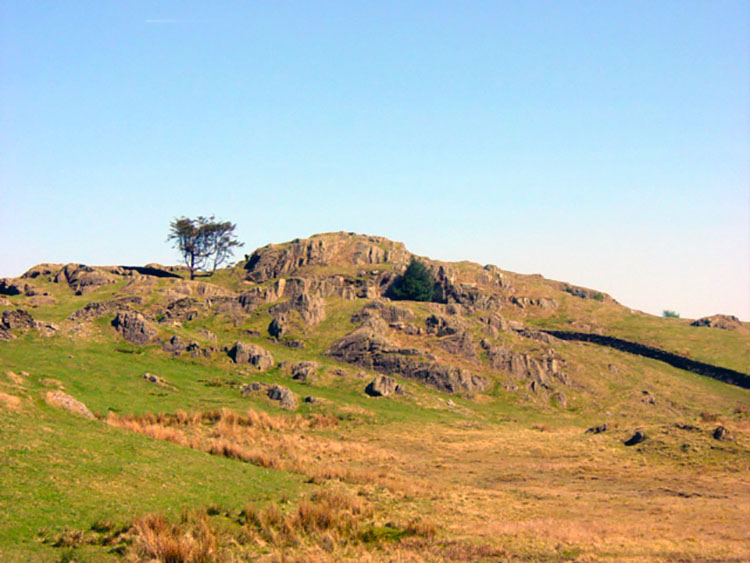 After the farm I followed a road for a few yards then turned into the driveway of Hag End. this was an unsightly place with old broken up cars, vans and small commercial vehicles strewn on each side of the the driveway up to the house and buildings. As I approached and passed the house a number of dogs started barking aggressively warning me off the land. A disgusting little interlude all round but I was soon rid of it as I entered a lovely gorse filled landscape much like the one I had just left behind at Outrun Nook. Another little climb took me to my first views of the larger Lakeland hills. Ahead of me now I could see the wooded slopes of my goal Lake Windermere, and beyond the magnificent peaks of the Langdale Pikes. I could not see the lake yet but I knew it was down there. 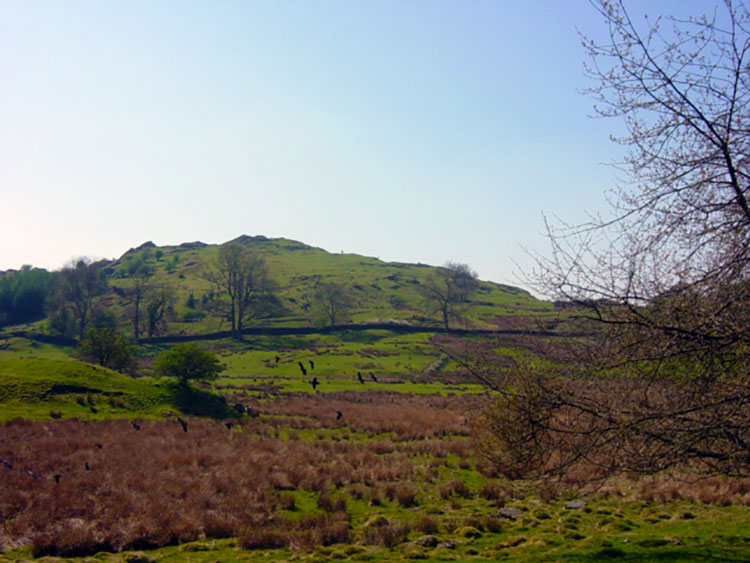 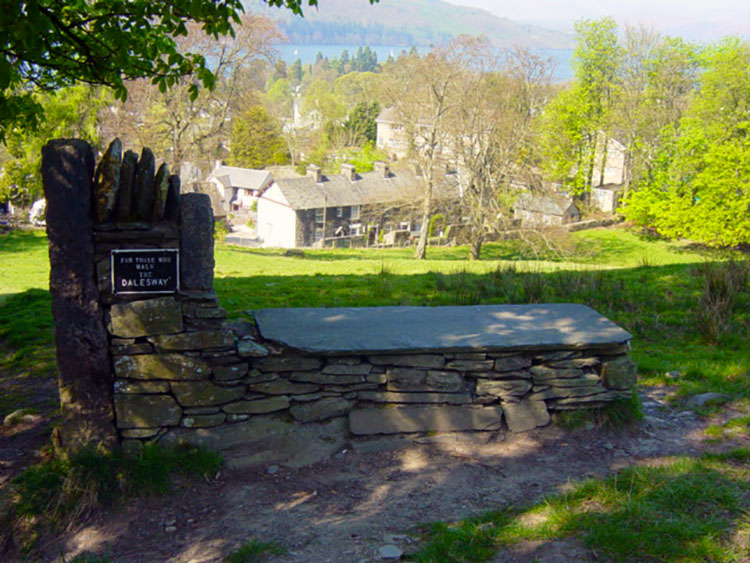 Rest before the finale

And so, excitedly I made my way off the tops and down to Cleabarrow via a wide bridleway in yet more scenic surroundings. From there it was a gentle descent to Matson Ground and Brantfell Farm. I looked at the imposing little Brant Fell, sat upon by a few people. I rounded it on its northern flank and thought that I would once have been one of those climbers exerting a little exercise on a day trip. A nice little Fell to climb near the tourist spot but I am into much more serious walking now. After the Fell was behind me I approached the higher houses of Bowness. I could see the Lake clearly now. Just before reaching housing in my last field of the walk I came across the stone and slate seat seen in the picture commemorating those who have walked the Dales Way. I briefly added my bottom to those thousands who had placed theirs previously and then walked into town and down to the end of the walk on the banks of the Lake. The deed was done and I was thoroughly satisfied. Well done too, Steve. Only obligations forced you to miss today. 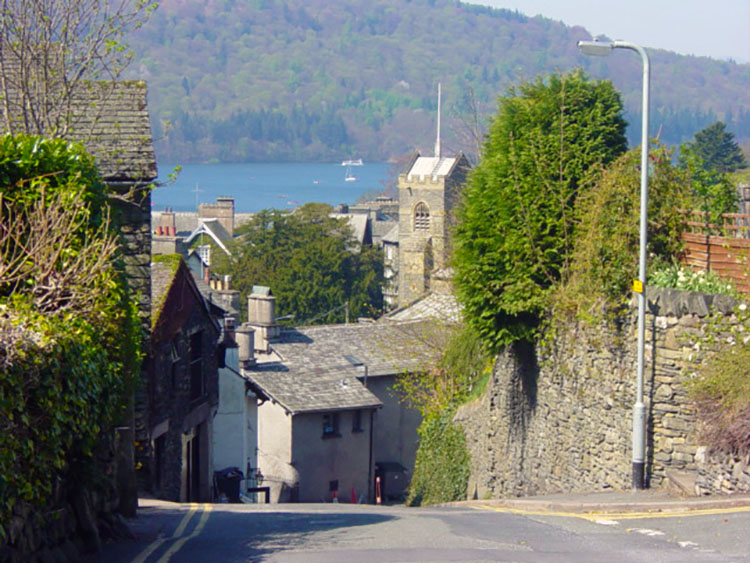 Into Bowness on Windermere 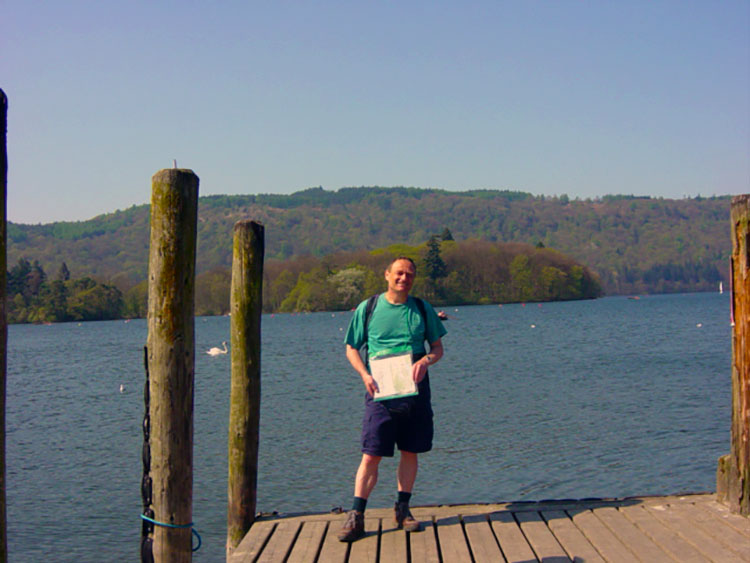 End of the Dales Way journey

The Dales Way is a great long distance path. Every day I enjoyed and each one held it's particular attractions. From the splendour of walking upstream with the mature Wharfe at Ilkley to its humble beginnings in Langstrothdale. The wonderful limestone pavements. That gorge at Conistone, admittedly a detour. The views of the great 'Three Peaks'. The rivers Dee, Lune and Kent. The views of the fantastic Howgill Fells. Dentdale and Dent itself. The approach to Lakeland. The smaller fells on the walk to Bowness. The views of Langdale. The wildlife, those Chinese Geese, the dippers, the ducks, numerous other birds I can't identify. The bleating of the sheep. The time-outs. The boozy nights! The company. I could go on and on. For anyone who reads this I only have one more thing to say. Get prepared, get out and do the Dales Way. It is a fantastic experience and you will not forget it.