Summary: Starting out from Sunnyhurst the walk climbs to Jubilee Tower on Darwen Moor before leaving the moor by heading south and west along the northern edge and crossing to the River Roddlesworth in Tockholes Plantation via the Roddlesworth Information centre and Royal Arms Inn. The river is followed upstream for a while before leaving the river to reach the ruins of Hollinshead Hall. The walk then heads south and east and back on to Darwen Moor via Conyries Plantation. Next, paths are extensively followed across the moor, first eastwards and then northwards, eventually heading back to the tower. Finally a descent of the moor is made on the same path used at the start of the walk back to the start at Sunnyhurst.

The Walk: I first noticed Jubilee Tower on my commutes from Harrogate to Preston when passing Blackburn on the M65. While on my way to, more than likely a meeting or update with my Manager I would think "That tower looks impressive. I would rather be walking up there". I often thought that and now a few years into my years of making my own mind up on what to do with my time I was on my way to the object of my wishes. I set off from the car parking area near to Sunnyhurst Wood and the Sunnyhurst pub. The path I followed began to climb immediately from the off, the way I like it. The first 300 metres took me along a hedged, tree lined lane. Then I stood beside a sign welcoming me to Darwen Moor. The sign also said "Please enjoy the moor". 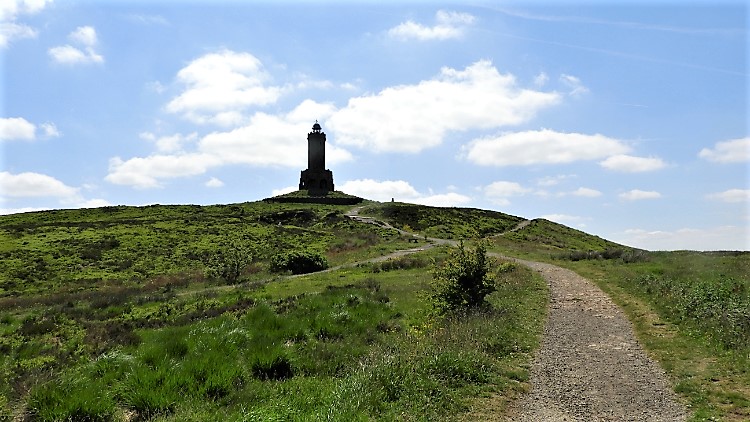 Climbing to Jubilee Tower from Sunnyhurst 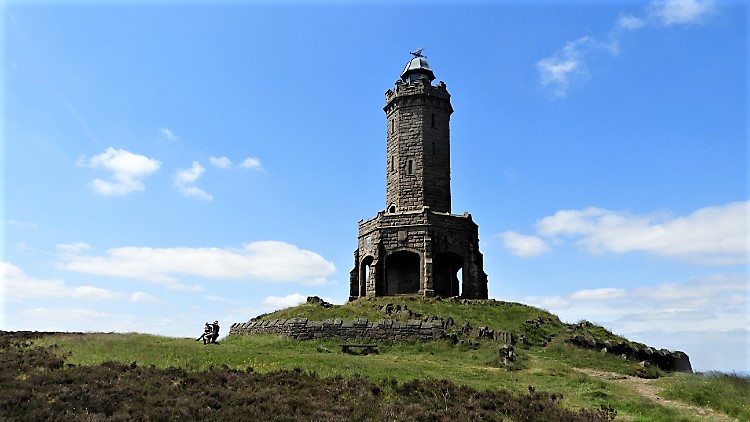 From the welcoming sign I continued climbing to the moor up the north side of Darwen Hill. I knew where the top of the hill was. The Jubilee Tower stood on it and drew me upwards. I climbed as fast as I could, wanting to get there and pay it my respects. After 150 metres of climbing and a kilometer of walking I reached the top. To my surprise and sheer luck the Tower was open to enter. Luck in the fact it had just reopened after been closed for quite a while. So I could revere it, touch it, climb it and thoroughly marvel at it. I did all of them. The octagonal Jubilee Tower which is also called Darwen Tower was completed in 1898 to celebrate Queen Victoria's Diamond Jubilee. It has been proudly admired by the people of Darwen, Blackburn and surrounding area ever since. And rightly so. I was proud to visit it too. The views I enjoyed from the tower of the West Pennine Moors, Darwen, Blackburn and surrounding villages and hamlets were well worth the effort of the climb up to internal spiral staircase. 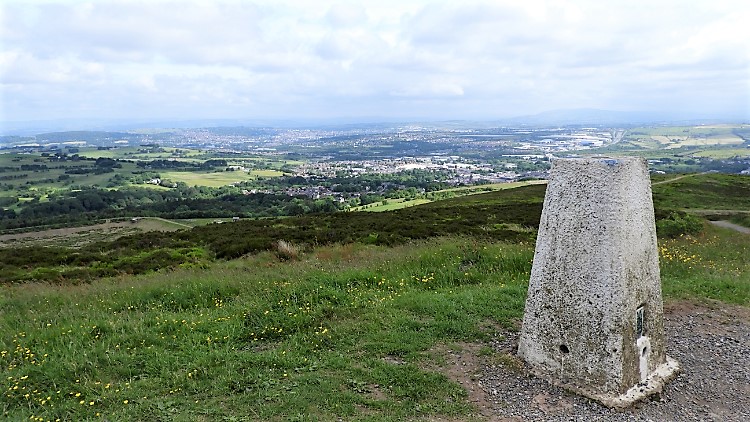 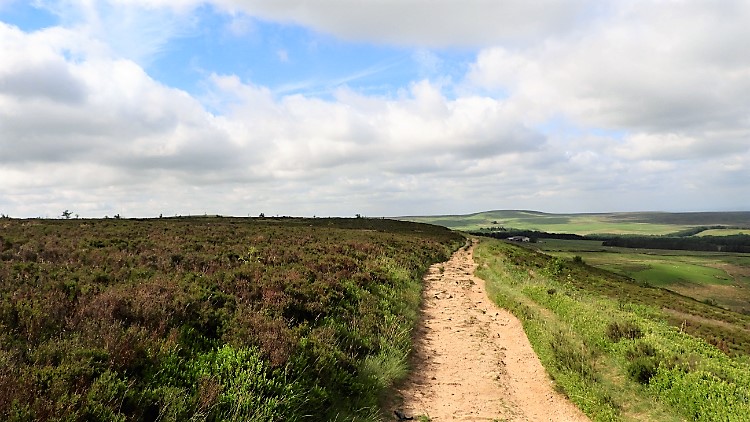 Walking from Darwen Hill to Tockholes

After coming out from the tower into the fresh springtime air I walked a few paces to the Ordnance Survey trig pillar on Darwen Hill and took a few moments to enjoy the view northwards across the sprawling conurbation of Blackburn. Then I set my sights south-west and followed the path skirting the top of the moor, leading me to Stepback Brook. After ten minutes of gentle descent from tower to a meeting of paths, the one I needed to take was on a switchback from south-west to north-west and steeply it took down from the moor to a lushly wooded valley in which Stepback Brook fed water from Darwen Moor to Earnsdale Reservoir. At the bottom of the steep bank a footpath sign showed me the way to follow a bridleway in the direction of Tockholes. 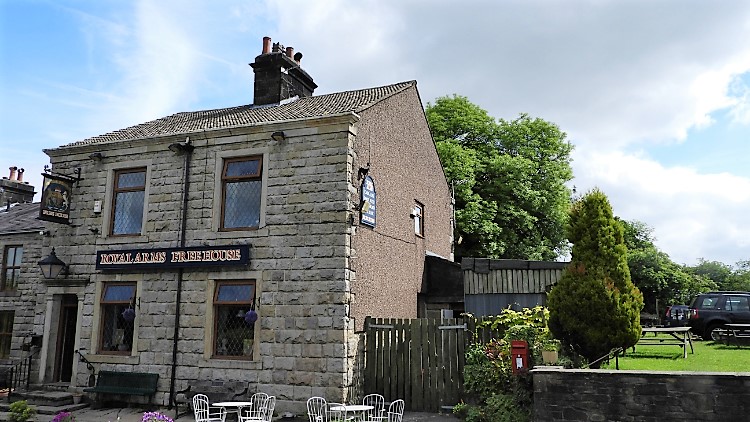 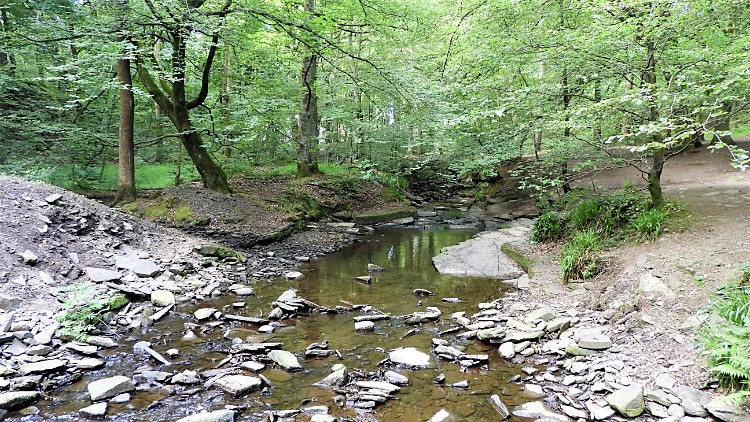 I followed the bridleway, first along a lovely avenue of mature trees and then across open fields towards a line of cottages. I counted about ten in all, most of them whitewashed. Most had washing hanging out on lines in the back gardens. It was a good day for drying. Beside the cottages, to the left of them as I approached was a gate which led me from the field to tarmac. I met a group of about 10 mature ramblers at the gate. (I was 62, at time of this walk, and they were much my senior). "We are heading on to Darwen Moor" said one to my inquiry. "I will be back on the moor later on too. Maybe I will see you up there" I replied. After saying goodbye to the group I passed Roddlesworth Cafe and Information Centre and then the Royal Arms pub before crossing a road and entering Tockholes Plantation. A path led me through the plantation to reach the River Roddlesworth, just a short distance upstream of where the river discharges into the Roddlesworth Reservoirs. 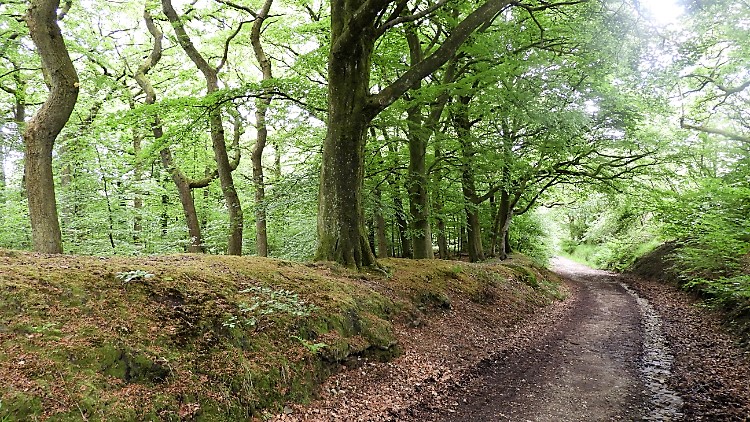 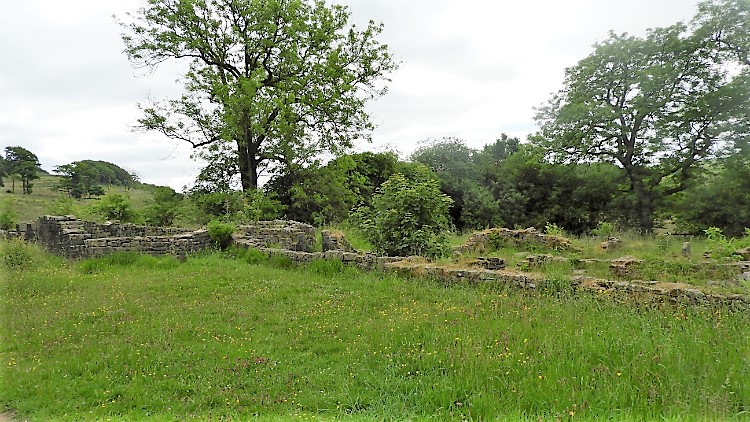 River Roddlesworth was a mere trickle in early June 2018, the time of this walk. The year and especially the summer was to be a very dry one; more on that later. The consequence of the dry weather was the feeble flow of the river. I could walk across it at almost every point without getting much more than a splash on my boots. I saw quite a few walkers in the plantation, some with children. The kids were playing in and on the side of the placid river without a worry. I followed River Roddlesworth upstream for just short of one kilometer before leaving it to track south-east, skirting Slipper Lowe hill to reach the site of Hollinshead Hall. A sign titled "Hollinshead Hall and Well House" could tell me no more, all supplementary information was torn off the weathered board. I just saw the ruins of the hall, low walls is all that remains. The Well House still stands, a little away from the house and paths. I did not find it. In truth I did not look for it, not knowing about it at the time of my walk. 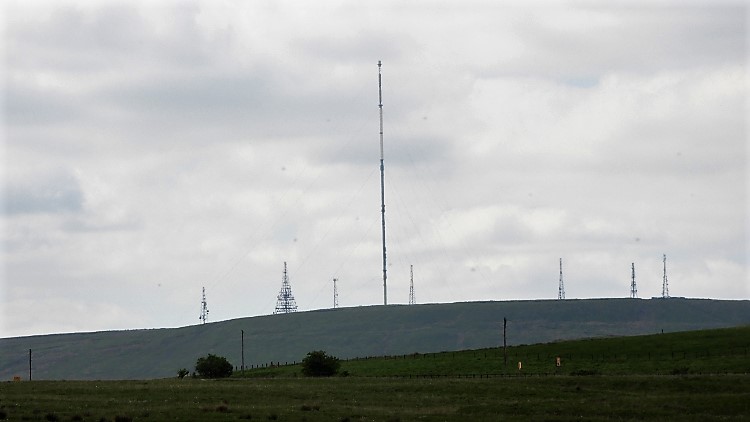 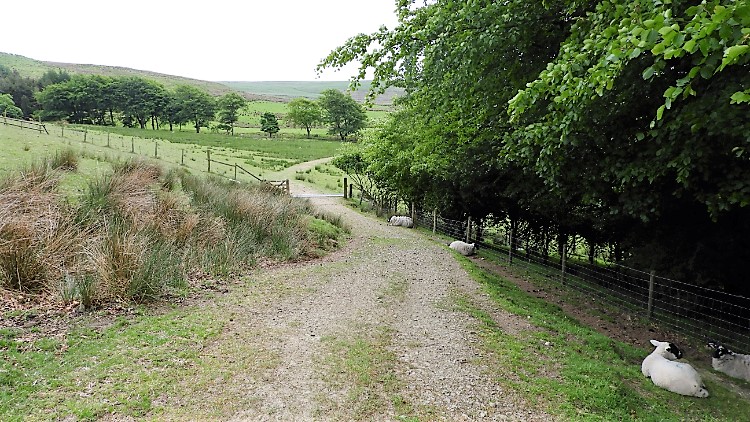 From the site of Hollinshead Hall I climbed back towards moorland along a path along the west edge of Thorny Bank Plantation. From the enclosure of plantation I could now see distant views to east and south. East of me was the high mass of Anglezarke Moor. South-east, equally bulky and high stood Rivington Moor and due south was Smithills Moor. Rivington and Smithills merge as one mass with the centrepoint being the height of Winter Hill. It is unmissable as the hill is covered in transmission masts. One dominates, the TV mast at an impressive 309.48 metres high. It is certainly a focal point and it drew my eyes for a while while I walked beside Thorny Bank Plantation and across to Conyries Plantation on the western edge of Darwen Moor. I was heading back there now. 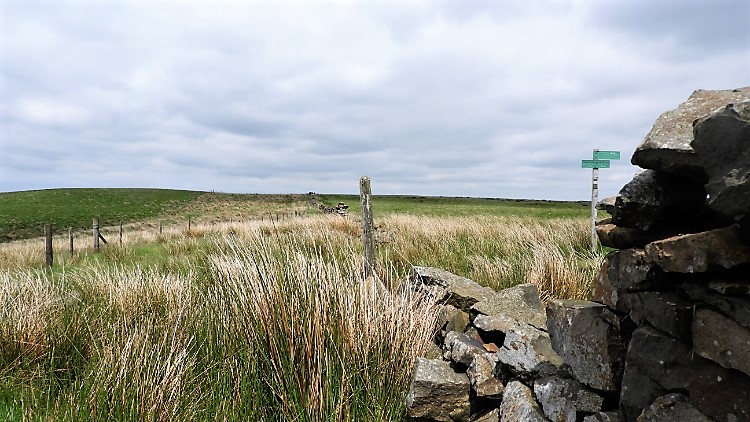 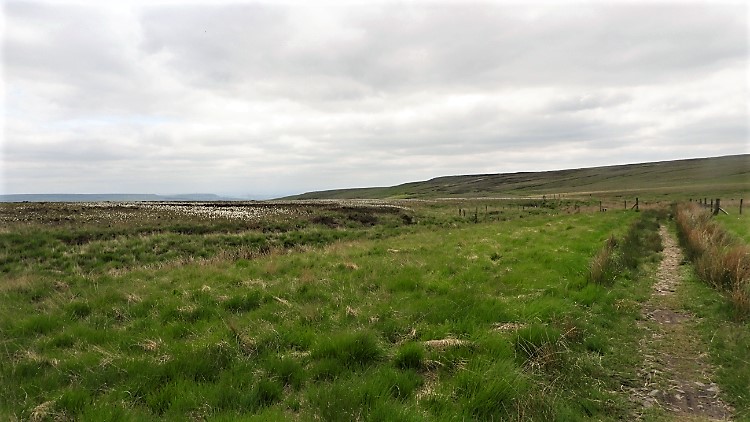 I climbed to the moor on the Witton Weavers Way footpath, which I had been following since I had reached the River Roddlesworth. On the climb to Turn Lowe, my point of return to moor top, I was harassed by a Plover. It is a regular occurrence for me to be harassed by a Plover, or Lapwing, in spring. A welcome spin off of hill and moorland walking in the birds breeding season. The birds do not like it but I like the attention they give me. They need not worry, I would never leave the path. I would never bother their young, that is a fact. When far enough away from the Plovers nest it banked off. With not so much as a "See you", off it went. I climbed to Turn Lowe and took a break for lunch. I found a seat, old and weathered with a plaque reading "In memory of Vic Ryan 1910-1990. President and Founder Member of Blackburn Rambling Club". I sat at it with respect. While taking lunch so I looked across the west side valley looking over the village of Belmont to Winter Hill. Little did I know that just one week later Winter Hill would be shrouded in smoke and walking prohibited from the area for much of the summer. Dry weather and high temperatures saw the moor covered in widespread moorland fires. It took a few months to put them out. Lunch over, I ambled across Darwen Moor, west side to east side. I passed by Wilding Fields, down and over Green Lowe and across Top o' th' Brow. It was peaceful magic high moor walking. Just me, a solitary crossing of Darwen Moor. 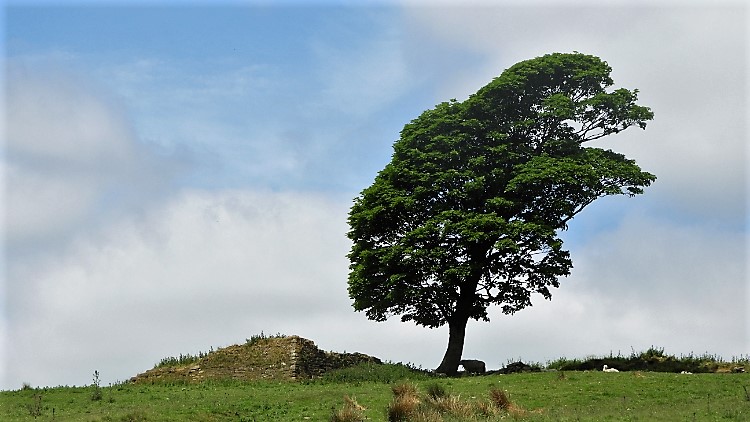 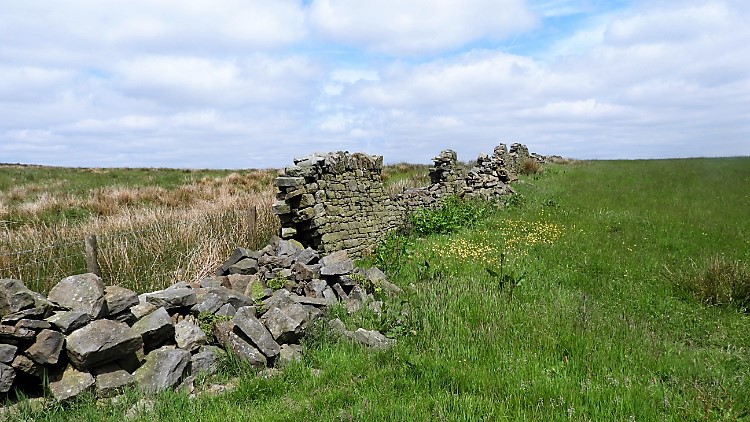 I had originally planned to turn north on the south-east moor to cross Wives' Hill and Black Hill. However, the path from Top o' th' Brow had led a little further east than which I had planned so I turned north about 20 metres lower on a contour line of 340 metres. The scene to my right was very pretty, a small pond framed by a lush copse of trees. The scene to my left was pretty too, a solitary tree leaning to the north as forced by prevailing winds stood next to a collapsed stock house. It was on Wives' Hill which I skirted around by the east side. I skirted around the rim of Black Hill by the east side too, sticking to the route of Witton Weavers Way. It brought me to a stile over a wall. A sign on the stile read "BEWARE Bull and Suckler Cows with Calves". I did see cows at a fair distance away. I never saw the bull. I also saw Jubilee Tower again, a speck in the distance. 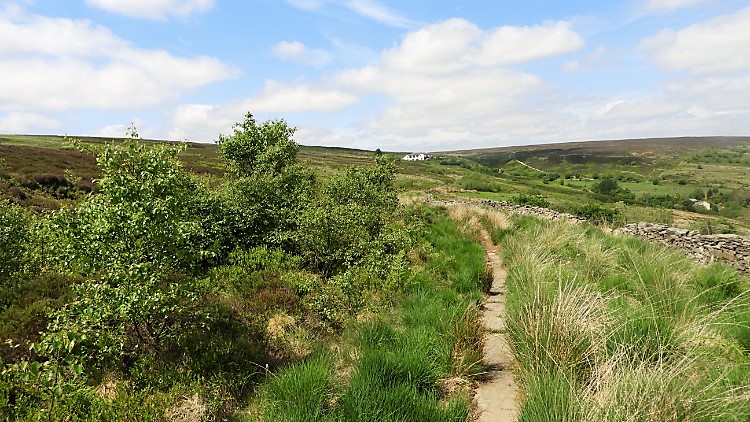 Crossing the moor to Duckshaw Clough 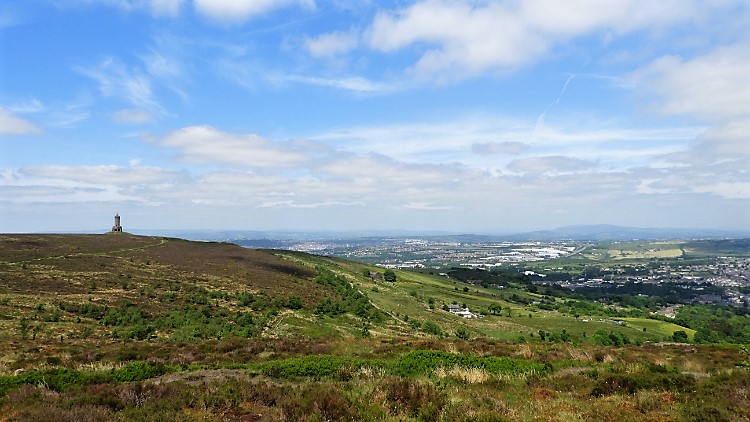 Darwen Moor and the town of Darwen

The day was lovely, warm and sunny. The walking was great. I came to a wire fence with a stile leading over into a copse. I walked through the copse and then back over another stile to follow the path leading north-west along the east fringe of the moor. A white house on the moor acted as a beacon, drawing me towards it. The path led me to the edge of the house, highest on the moor, near to Duckshaw Clough. I followed the house access track down to a bridge over the clough before leaving the house access road to climb a short steep freshly white stone track back up to the moor. Heading north, then east, still on Witton Weavers Way I homed in on Jubilee Tower. Now I was walking straight back toward it, getting larger in my eye line with every step. The town of Darwen was a diverting view, sprawling out along the right side plain. Suddenly a helicopter shot across the view, almost at my height, heading from south to north. It was a quick short diversion from the peace of the moor walk. The rush of noise from the helicopter went as quickly as it had arrived in my compass of hearing. 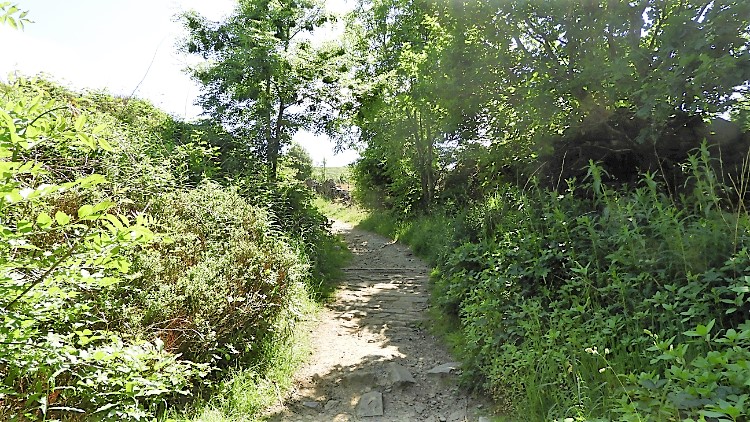 Lane from Darwen Moor to Sunnyhurst 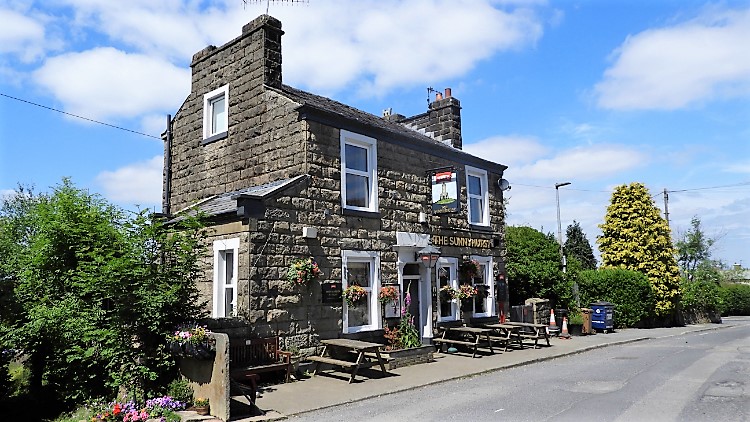 Soon after I arrived back at Jubilee Tower. It was around 2.00 in the afternoon and a few people were milling around the edifice. Some sat on benches close by the tower and some were on the observation balcony I had stood on earlier. I let them be, walking on by and continuing walking off the moor by the very path I had followed to access it. I ended my walk back at the entrance gate to Sunnyhurst Wood and reflected on a good day out. Lancashire has some great moorland walks, I know that now. And that commuting thought of "I must climb the hill with the tower" had now been achieved. Thankfully, for a wonderful walk had resulted in the fulfillment of a wish.