Summary: Kirkby Lonsdale is a lovely town and set in a lovely location. While in Lancashire the town is close to the borders of Cumbria and Yorkshire, making it a popular location for walkers with areas of the Lake District, Yorkshire Dales and Forest of Bowland all within an hours drive. You do not have to leave Kirkby Lonsdale at all though if you are looking for interesting walks. Hutton Roof Crags, Farleton Fell and Barbon Fell are all upland adventures to be sought from the town. As is this beauty of a walk, a lowland adventure which heads from Kirkby Lonsdale across splendid countryside to the village of Whittington before returning on a two mile riverside walk alongside the Lune, one of Lancashire's finest rivers.

The Walk: I found this walk in a book. The route was the right length for the half day available and the description an interesting read so I decided to walk it with friends while we stayed for a few days in nearby Ingleton. The only change I made was to walk the route anti-clockwise, leaving the long riverside walk until the end. However, which way OI had headed would have started beside the River Lune as a shorter riverside walk featured at the very start of the walk anyway. 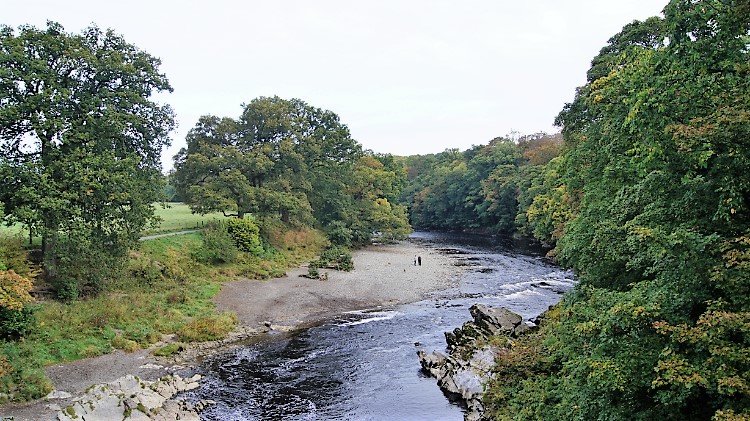 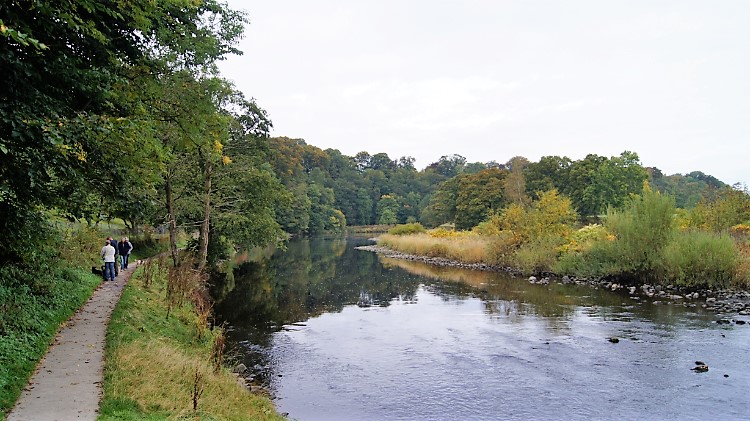 I was with Steve, Jan, Keira, their enthusiastic cross Spaniel/ Labrador and Ziggy, their daughters Collie. After parking up at the designated area just across the A683 road from Devil's Bridge we set off, crossing road and bridge to find the footpath leading north following the River Lune upstream to where the Island splits the Lune to a north strait and a south strait. A few people passed us going in the opposite direction, from Kirkby Lonsdale to Devil's Bridge. Most were dog walkers; it is a very popular stretch of riverside path and on sunny summers days it can be quite crowded. This time though, on a cool and overcast Friday morning in early October, there were just a few hardy walkers. Steve walked Keira. I walked Ziggy. 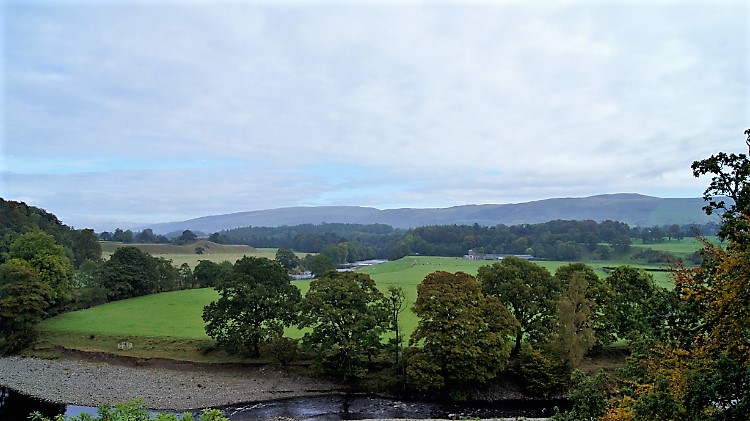 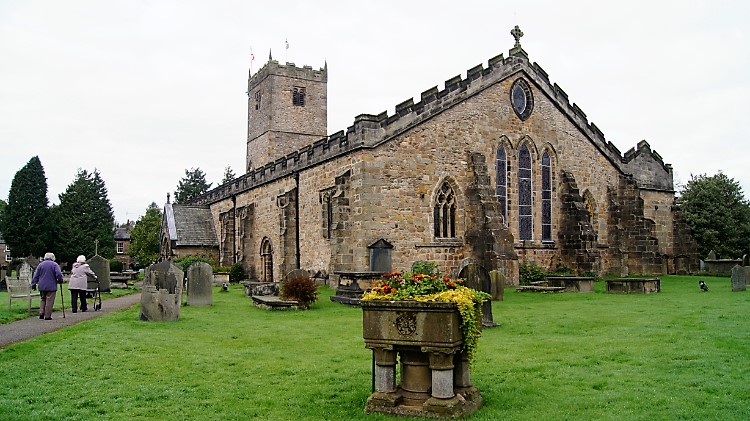 After a kilometer of walking beside the river we climbed towards Kirkby Lonsdale by carefully negotiate the Radical Steps, a stairway of 86 steps leading up to Ruskin's View and St Mary's Church. The steps are less than uniform and the going is steep. Care is needed, especially so as the enclosure of buildings and high trees disallows the steps from any drying air or, should it be available, direct sunlight. I guess they are permanently wet for most of the year and at all times from October through to March. Steve held Jan safely throughout the climb as I do with my wife Lil when we attempt the Radical Steps, whether going up or down. This time, ascending, led us to the gorgeous spectacle of Ruskin's View. The renowned art critic loved the view so much that JW Turner painted it. Turner's Ruskin's View painting sold for £217,250 at auction in 2012. We were better off, we had the natural cherished view across the River Lune to surrounding fells and countryside for nothing. 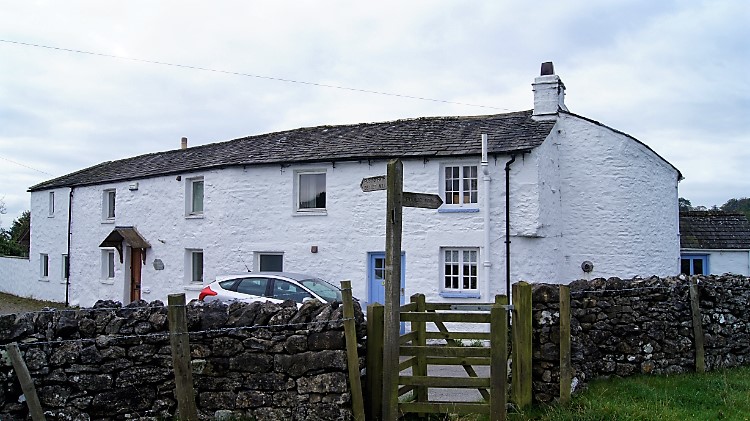 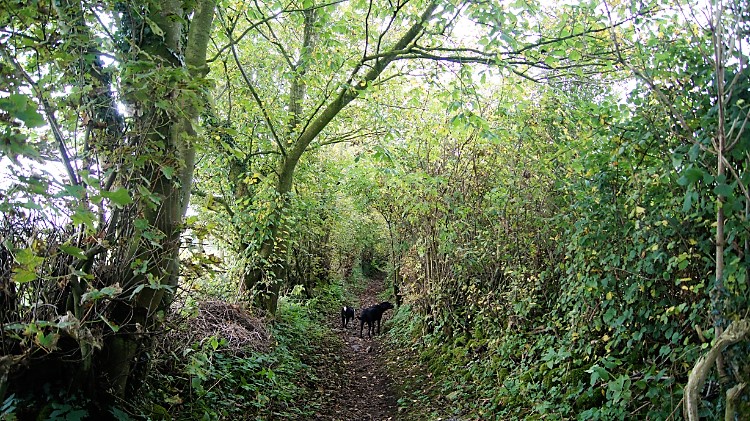 After enjoying the view praised by Ruskin as "One of the loveliest views in England" and after enjoying an amble through the peaceful grounds of St Mary's Church we continued our walk by making our way through the heart of Kirkby Lonsdale by way of Mitchelgate, New Road and Biggins Road. Full of interesting shops, pretty buildings and nice hospitable residents, the walk through Kirkby Lonsdale was entirely pleasant. After passing Queen Elizabeth School we left the town by carefully crossing the A65 and following the permitted path by bisecting the school's sports field to follow the path across two more fields to reach a country lane at Low Biggins. Crossing the lane and walking down past a row of whitewashed cottages led us into a lane, more like a woody trail, heading south to Sellet Mill. We could let the dogs run free for a while now. They enjoyed running up and down the lane while we trod on. 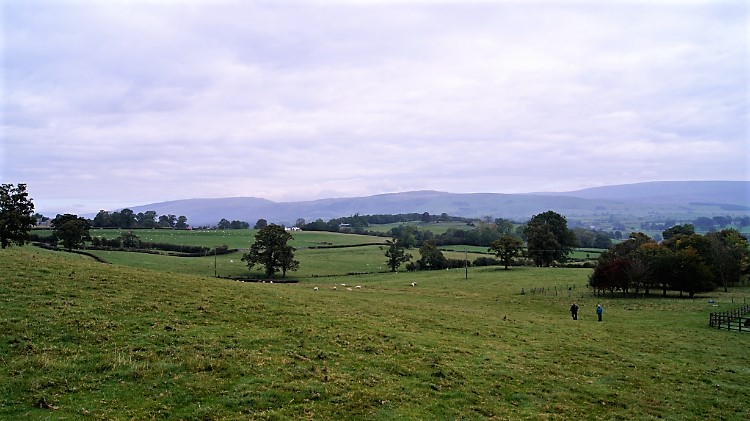 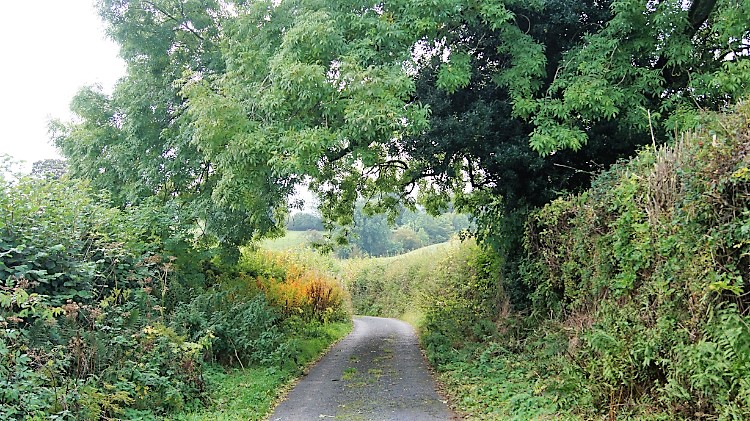 The path to Sellet Mill turned to broken stony ground near the mill, akin to a river bed. Looking at the map I found out why as I saw we were walking on the path which ran next to and parallel to the line of a stream. The path was the stream bed and some steps we took were to one side in order to clear puddles. I would not want to do this section of the walk after a rainy spell of weather. After Sellet Mill, converted to a house with an envious garden, we left the enclosure of the track cum stream to cross lovely open field, a sloping walk on the north side of Sellet Bank. A trig pillar marked the Sillet Bank top, I ought to have run up the field and bagged it. Instead I stuck to the path, keeping Keira and Ziggy amused while Steve and Jan followed on close behind. When across the field I waited for them at a stile leading us from the field to Hosticle Lane. 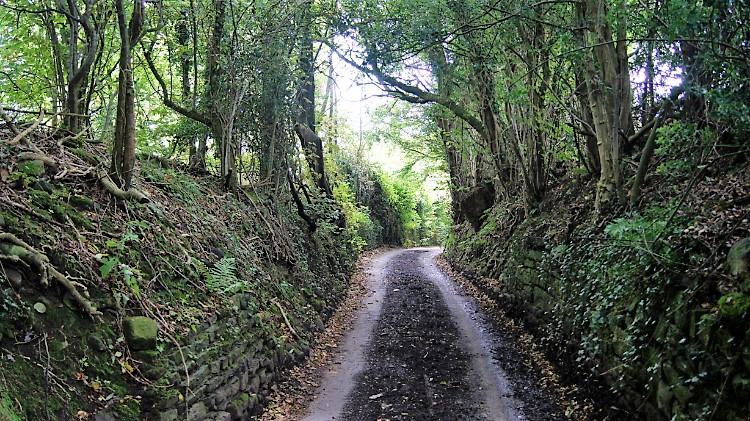 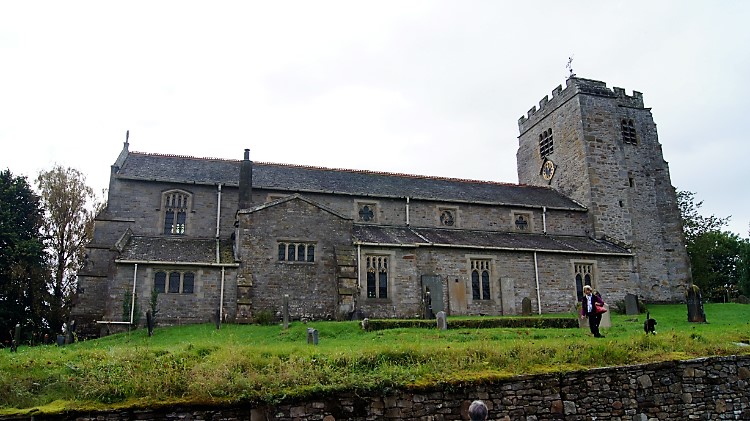 Some tarmac lanes, country roads if you like are a delight to walk along. Especially if one or two cars are the most you come across in a while. Hosticle Lane was as delightful to walk along as a country lane can be. The road was narrow so two cars meeting would be fun. I guess that is why we never saw one on the entire 1,150 metres of walking we did down Hosticle Lane all the way into Whittington. The lane had high hedges, higher than our heads so we were closed in, looking at the rich autumnal colours of hedgerow and lane side trees. On the latter stretch the lane dipped into a natural Holloway, carved six feet deep by the years of foot, wheel and tyre traffic. A sloped retaining wall had been built to stop the higher ground falling in on the track and so keeping it for vehicular access. Soon after walking through the Holloway section of Hosticle Lane we arrived in the village of Whittington. 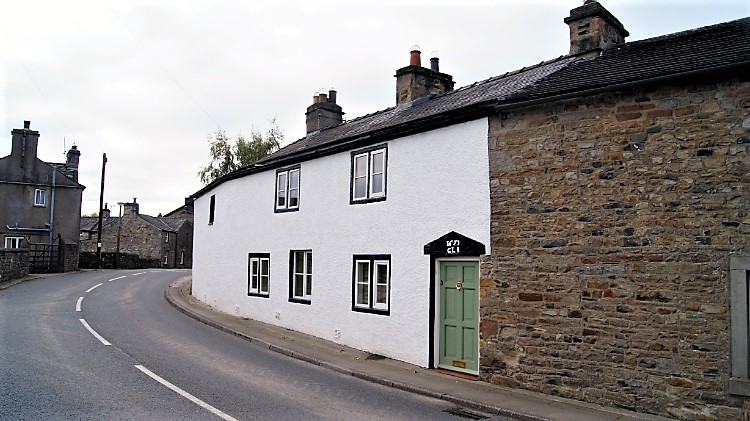 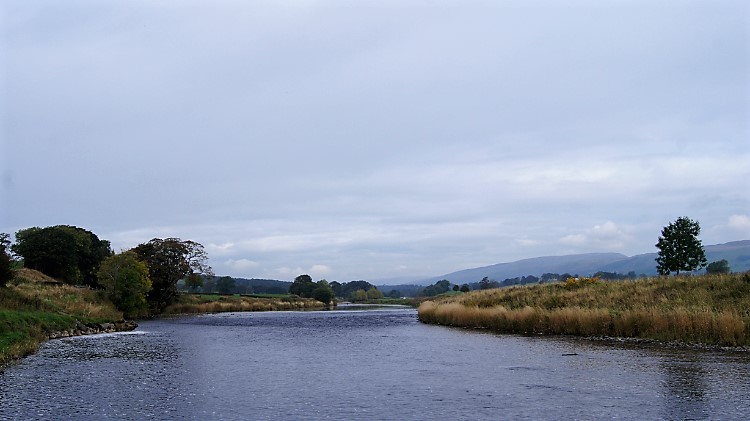 The first building of significance we came to in Whittington was St Michael's Church, a fine structure which stands high above the road. I learned it stood on the site of a former Motte and Bailey castle, hence its lofty place over the road. More fine houses lined the main road through Whittington which has a total of 39 buildings that are recorded in the National Heritage List for England as designated listed buildings. That is quite a number but the village is pretty gorgeous. Having said that we were disappointed not to find a shop in Whittington. We looked high and low, wanting a bar of chocolate and a drink to mark our half way point of the walk. We had to make do with Apples plucked off a laden tree. These fruits of autumn were complemented by wild Blackberry, or Bramble as we call them in the north. Jan stopped for quite a while gathering a handful from a row on the side of Burrow Mill Lane between Whittington and the River Lune. After the Apples and Brambles we reached the river. 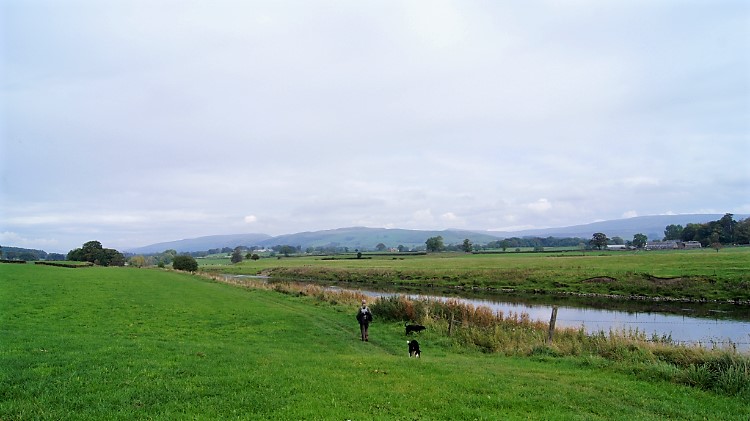 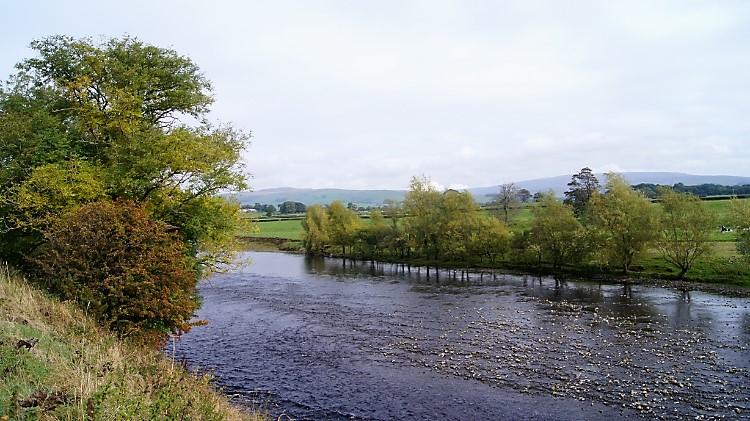 Before concentrating on the walk along the River Lune which will lead us to the end of the walk another thing of note about Whittington. This remarkable village was so quiet. Apart from one lady in the churchyard we never saw another soul in Whittington. But we did come across a house with a blue plaque pinned to the garden wall. It read "WILLIAM STURGEON. Electrical pioneer. Inventor of the electro-magnetic motor. Born in Whittington 22nd May 1783".

We began our final two miles of the walk, all alongside the River Lune from the end of Burrow Mill Lane. The walk began on the riverside edge of a wide open grass field, giving us an immediate feel of being in the great and wide open. Views across the river to the west facing fells on the fringe of the Yorkshire Dales provided a great landscape. They included Leck Fell, atop which stood Crag Hill and Gragareth, evoking memories of a great walk which I had enjoyed a few years earlier. 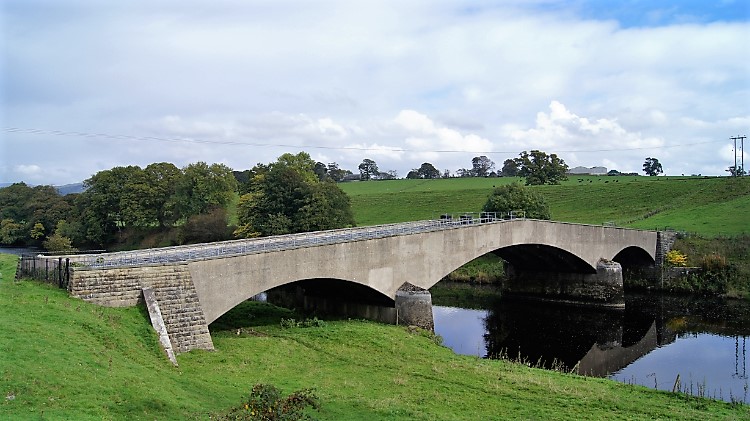 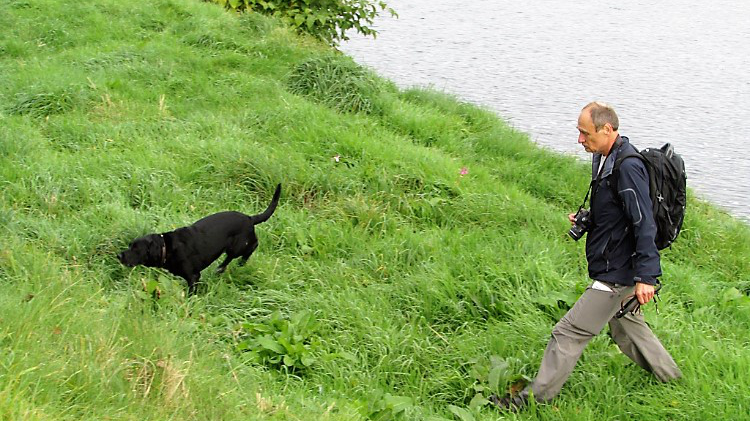 There were a few flowers bringing colour to the grasses by the riverside. Predominant were Himalayan Balsam, a lovely pink flower now regarded as an invasive species because of its prolific spread. However in the quantities found here it was nothing but a joy to see. Other delights were the riverside trees, not abundant, but in some copse pockets. Most were Ash and Beech with some dark green but now dominated by brown autumnal tinges. Oak, Hawthorn and Rowan with deep red berries also enjoyed places alongside the river. Halfway along the river walk we kept very quiet so as not to disturb a sole angler fishing the middle of the river a short way downstream of a rapids section and wide shingle island. Soon after we reached a bridge spanning the river and appearing to lead to nowhere. The bridge conveyed four iron pipes. Probably raw water for treatment and distribution. 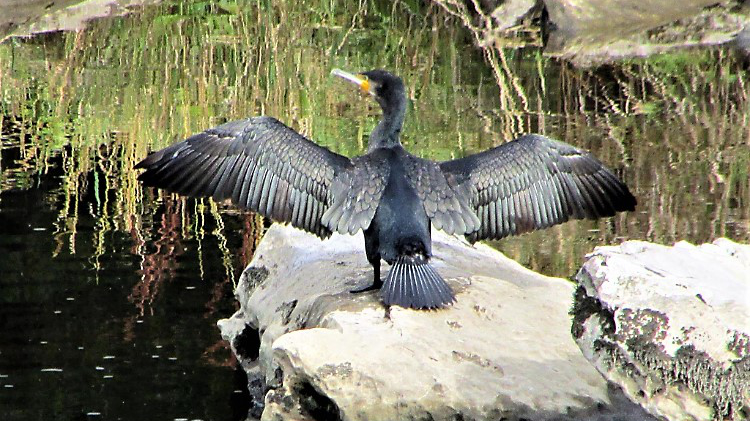 Cormorant on the River Lune 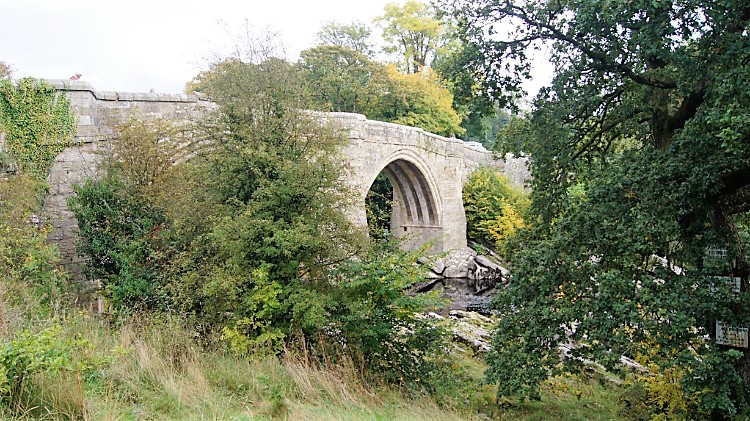 All since joining the river after Whittington and between the flowers, trees, rapids, shingle banks, islands and the angler we had enjoyed the company of birds on the river. A couple of graceful Swans had sailed past and a flock of White Faced Gulls had bathed on the far east bank. Later a line of four Swans floated past us, heading downstream. Soon after they had passed Steve beckoned me to stop "Keep still. Look over there, on those rocks by the riverbank" he said. It took me a while to focus on the point of interest but soon I saw it too. A beautiful Cormorant. According to the RSPB website it is often it is often seen standing with its wings held out to dry. Which is exactly what it was doing while we watched. We had to walk past the bird to finish our walk though, so after the vigil we proceeded on our way. The bird stopped its drying as soon as we stepped on and flew down the center line of the river. Away from us towards Whittington. Soon after our enjoyable spell of bird watching we were back at Devil's Bridge. The delightful walk was done.