Summary: This walk from Ilkley takes a extensive tour of Rombalds Moor. The moor forms a natural barrier between Airedale and Wharfedale with Skipton and Keighley on the Airedale side and Ilkley on the Wharfedale side. The moor is home to lots of smaller moors named after the towns and villages surrounding the moor. Therefore on Rombalds Moor you will find Addingham High Moor, Ilkley Moor, Burley Moor, Hawksworth Moor, Morton Moor and Bingley Moor. Quite a family Rombalds has! Rombalds Moor has been home to man for a very long time and while it is mainly used for recreational purposes now the moor was once home to hunters of the Mesolithic age (11,000 - 9,000 BC) and then farmers of the Neolithic age (7,000 - 2,000 BC). Bronze age and early Celtic people then made their mark on the moor by making carvings into the stone, much of which remains today. The walk visits some of these ancient places as I walked over the moor. 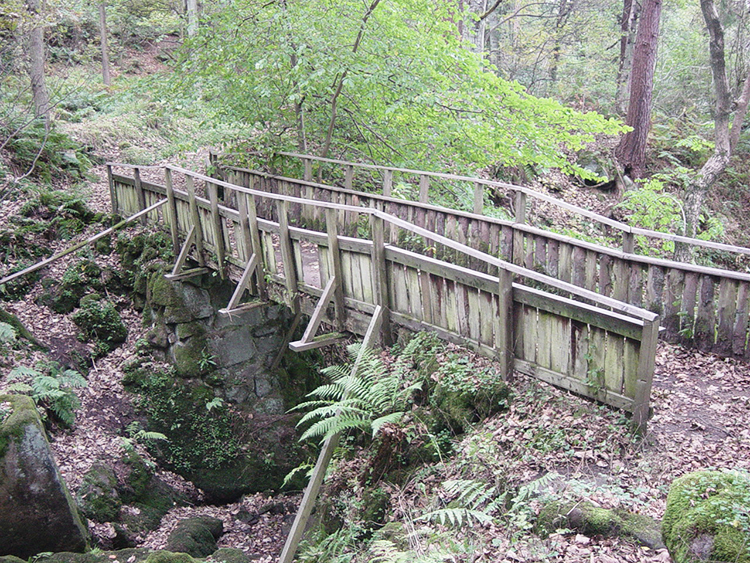 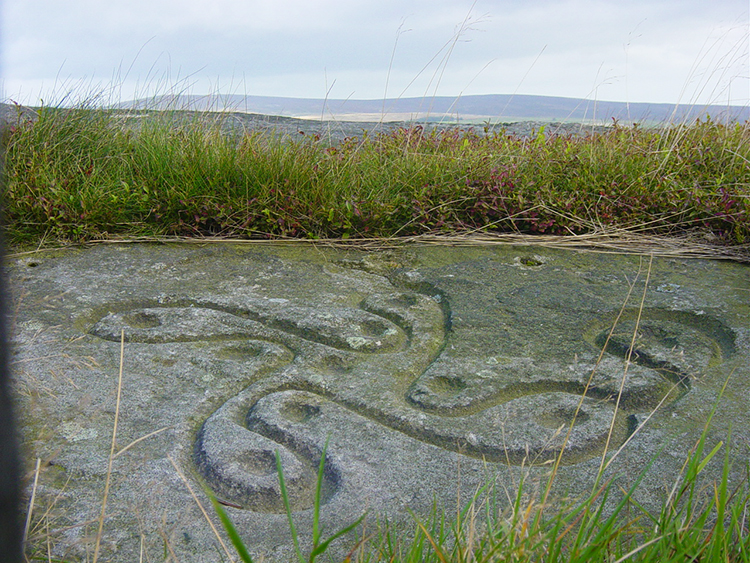 I began the walk by parking my car on Heber's Ghyll Drive and walking up alongside the gill into Hebers Ghyll Woods, crossing the Ghyll on numerous occasions by way of a series of wooden bridges as I climbed towards the moor. Eventually, after about 100 metres of ascent I exited the woods and stepped out to the open moor. Oh, by the way, I noted some of the wooden bridges in the woodland were in need of a little TLC so watch your step if crossing them in the same state of disrepair. Back to my walk now. After emeging into light from Hebers Ghyll Woods I headed west along the north facing fringe of the moor. My first objective was the Swastika Stone which is protected inside some iron railings. The popular belief is that the markings are from the 4th century BC and are a form of Celtic art. After the visit to the stone I carried on in my westerly direction on the edge of the moor which allowed me great views over the Wharfedale valley while I walked. 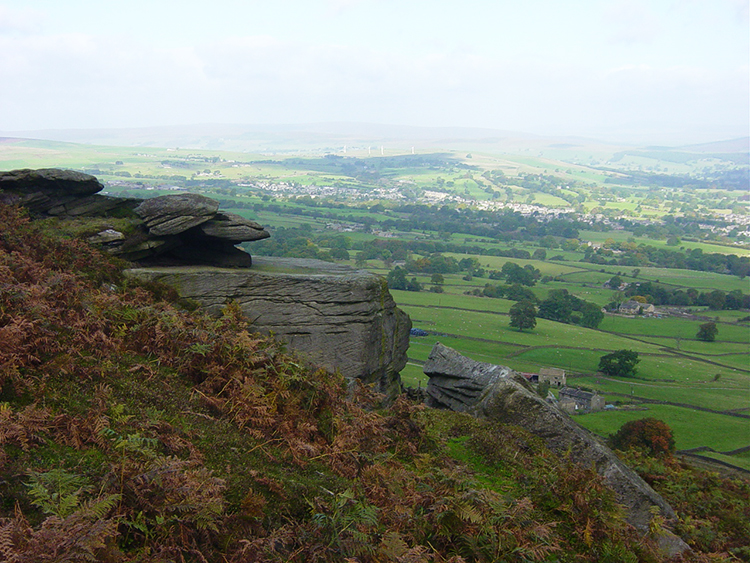 View of Wharfedale from Ilkley Moor 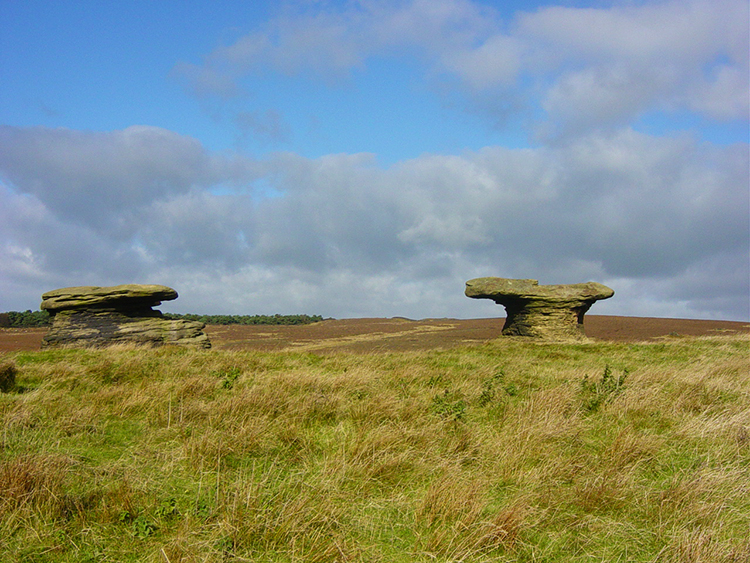 Despite it being mid October the day was a dry and sunny and thus views were good. It was as windy as it has been for quite sometime though but I was making good headway and too warm to do the moor Baht 'at! After passing delightful spots like Piper's Crag and Noon Stone I arrived on Addingham Moor and made a beeline on a track to the south that took me to the Doubler Stones. The two mushroom shaped stones of hard gritstone are an impressive sight. I stopped at the stones for my first coffee break which was most welcome. 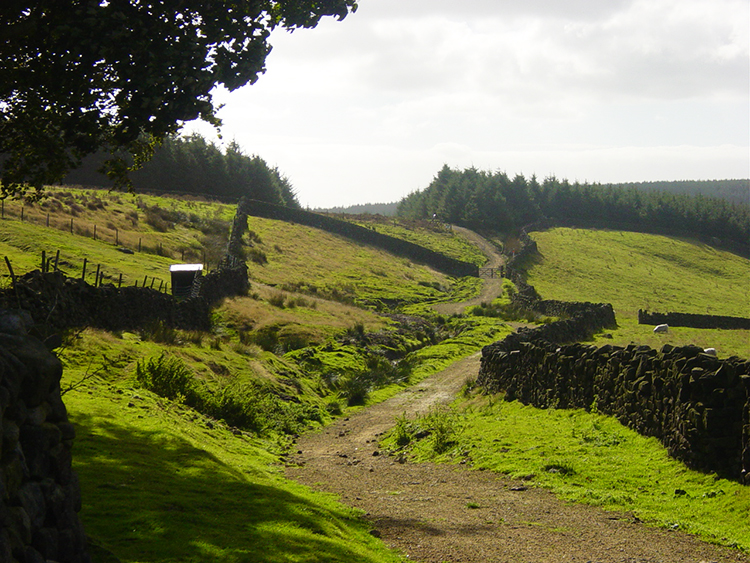 The track from Doubler Stones to High Moor 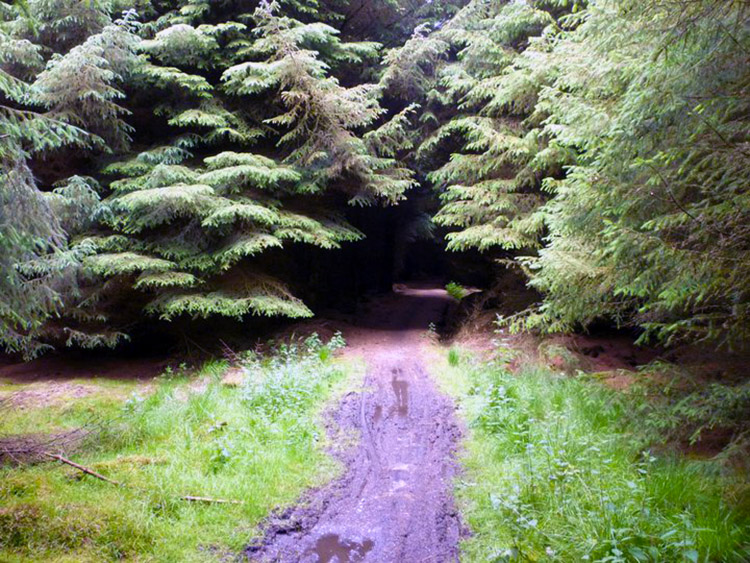 Into the dark plantation

After coffee I set off from the stones and followed a track south-east into High Moor Plantation. The walk was quite now as the wind was held back by the densely packed pine trees. I continued in a south-westerly direction following a forest track that became a road and then left it to scuttle through the trees for about 20 yards until I rejoined a path, seldom walked, at Rivock (SE080445) which took me over moor and then pasture fields to the tarmac Ilkley Road which I crossed near Upwood Hall.

(Note: the track I followed in the plantation is now barred. Therefore the map and route files provided are amended to follow the permissive way which was followed by Mr David Harrison in 2018. To reiterate the map and download files follow David's route on the permissive paths and along Silsden Road which you must now take). 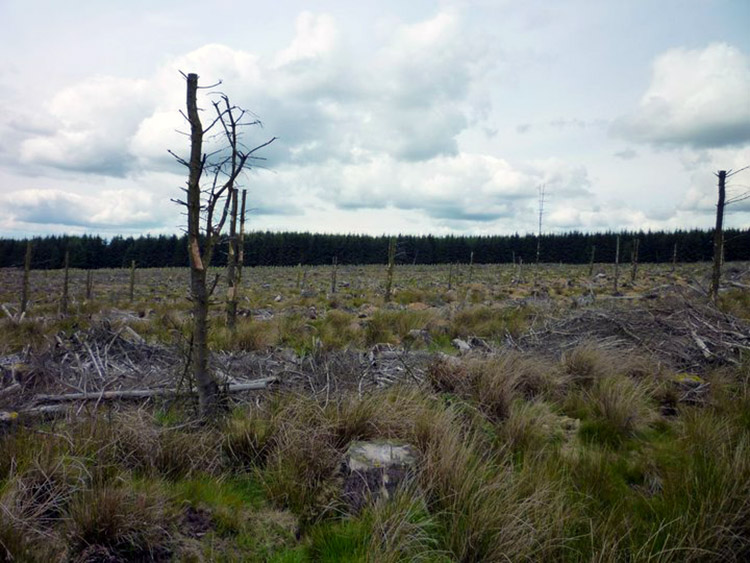 No fun to walk through 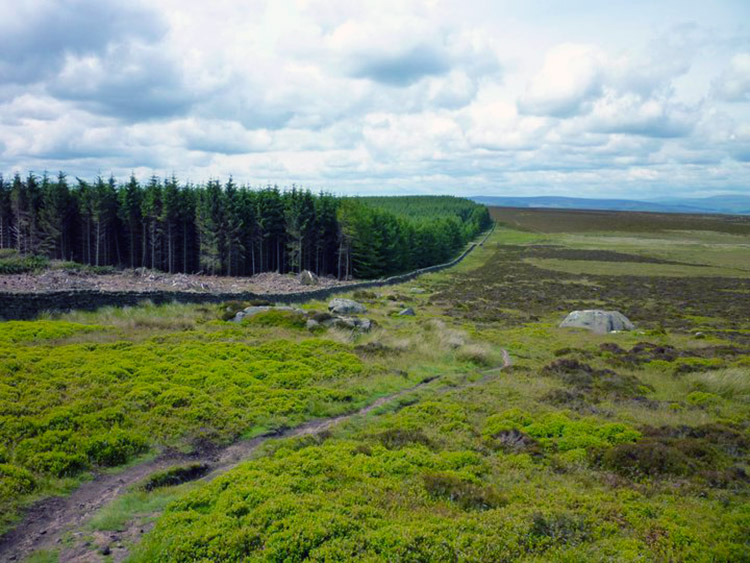 Looking back to the plantation from Rivock

This leg of the walk was different to the moor, all farm tracks and pasture fields that took me to a quaint quite copse called The Glen with Brad Beck running through its center. This pleasant reprise from the moor led me through the Glen to near Glen Farm from where I followed the permissive path to cross the dam of Sunny Dale Reservoir. From there I tracked south into the pretty hamlet of Ousel Hole, leading directly south to Botany and across fields to the edge of a row of terraced cottages on the East Morton to Menston road. I followed the road east past the terraces and to the next junction along where a sign pointed northwards and back on to the moor. That is the way I went. 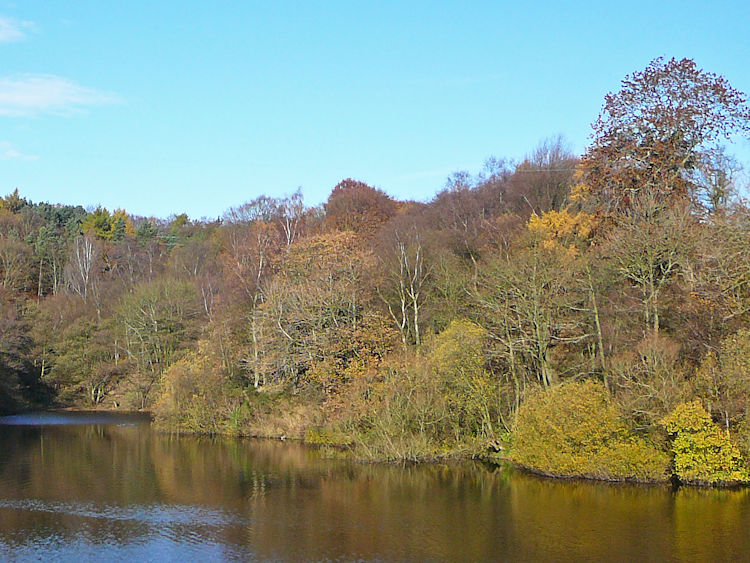 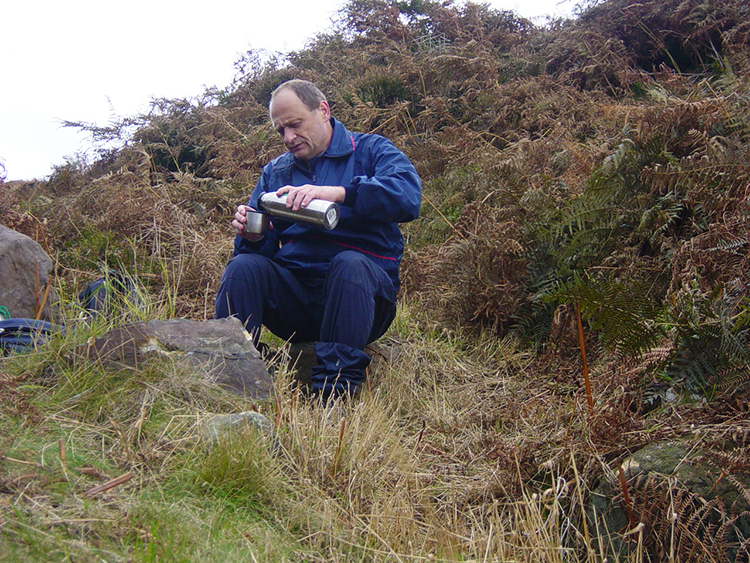 Back up to Ilkley Moor I climbed via Richmond's Spa (Chalybeate) and Yellow Bog where I came to the upper reaches of Fenny Shaw Beck. After clambering down to the beck I stopped for lunch. I would need to refuel before setting off up the beck and into the unknown. After my welcome lunch break I walked steadily keeping to the side of the beck. I often came across tracks and wondered who had made them. Then I spotted some huts at the head of the beck and it became clear that these were the tracks of grouse shooters. True enough I came across little wooden bridges and stiles unknown to anyone but the grousebaggers. That is except for me. I now know of them. 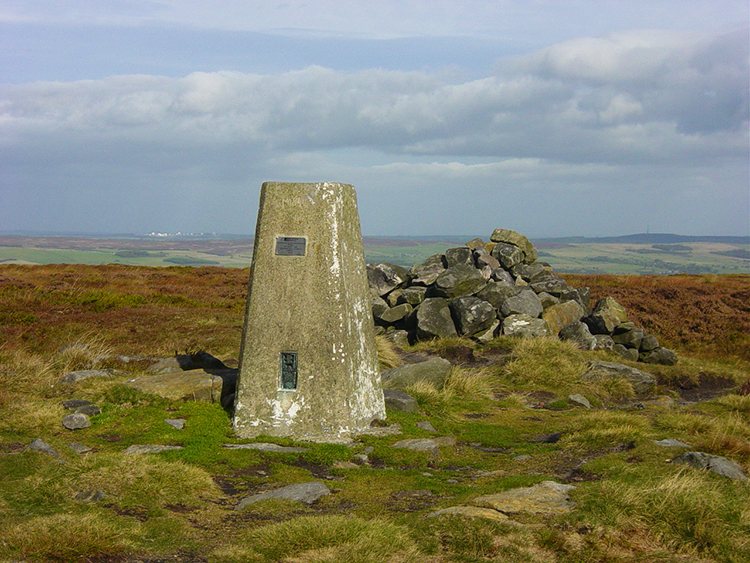 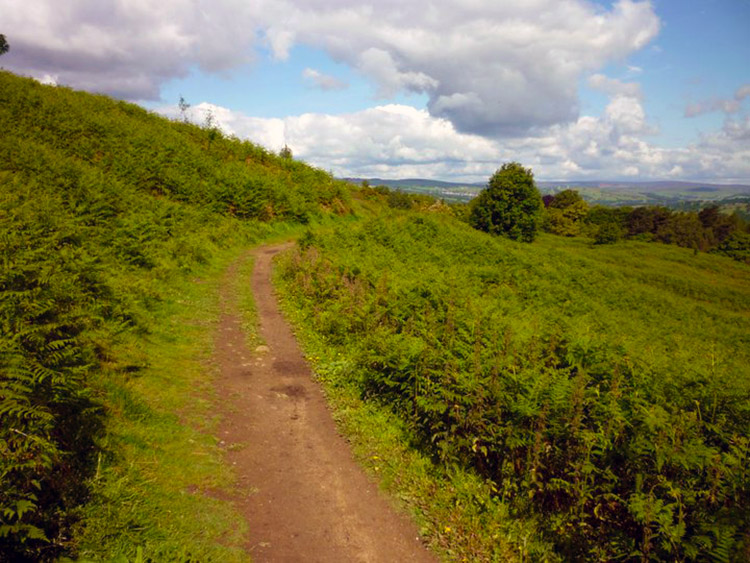 The path from the moor back towards Ilkley

After the fun of Fenny Shaw Beck I emerged onto the moor. For the next hour I walked in total solitude and apart from the whine of the now decreasing wind only aircraft taking off from nearby Leeds Bradford Airport distracted my attention of the moor. After the hour crossing the moor I arrived at White Crag and then decided to detour due west to the trig point on the moor which stands at 402 metres above sea level. Here I made my last brief stop to relax from the moorland walking while I enjoyed the views. After the break I made my way off the moor by walking due north towards Ilkley. I eventually arrived at a little copse that led me down to Spicey Gill. It was a steep drop to the gill and then an equally steep climb out which was a little tough because I was now getting tired. Fortunately the climbing and trudging through undergrowth was now behind me for the day and I walked along a track to Silver Well Cottage. After walking past the cottage I had a final short moor walk to the point from where I had exited Hebers Ghyll Woods earlier in the day. I was relieved, I had done enough today and after walking down the wood to the car I sat down at the side of the car and had a final coffee. Only a 10 mile car journey now and I can have a nice hot bath! And that is just what I did while contemplating the enjoyable walk I had on Rombalds Moor.