Summary: This is a wonderful walk of discovery which should interest and delight all; young, adult and old. There is much to see in all of the three miles of the walk from quirky old shops to a small chapel built into rock, to exquisite woodland playgrounds and much much more. After a mile you'll be stopped in your tracks by excellent wood carvings which were designed and constructed by chainsaw sculptor Tommy Craggs. After the wood carvings there is still more including a visit to a hermit's cave and then a walk up from the river level through more sublime woodland before following roads to the town centre, to see Blind Jack and then to complete the walk by visiting the castle. 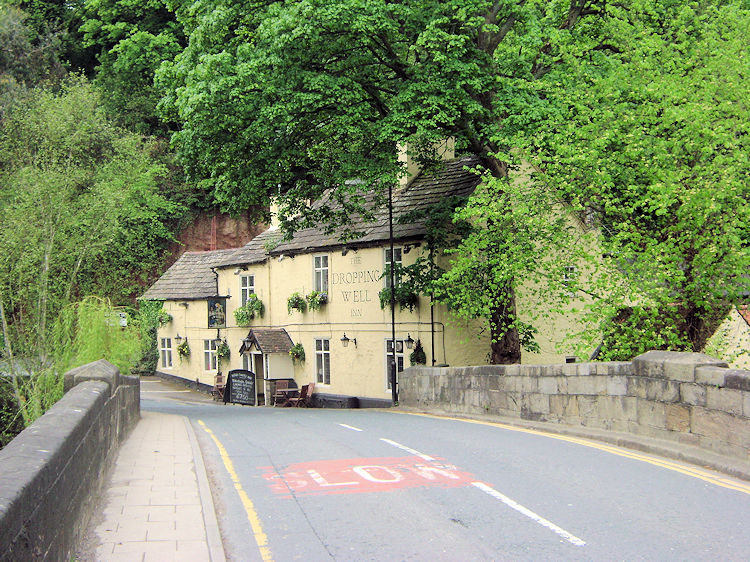 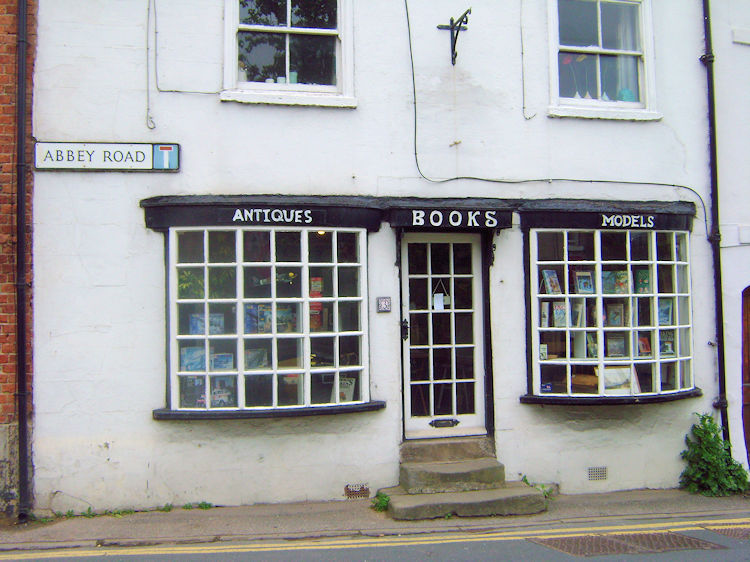 I did this walk as a birthday treat for Lil, a short walk discovering the interesting antiquity of Knaresborough while also checking out some remarkable wood sculptures my brother Dave had told me about. Therefore it was appropriate Dave joined us on the walk which began after I had parked up near the town centre. We started off by making the short steep descent to Low Bridge has a pub on either side. When we were there only one was in business, the Dropping Well on the Calcutt side of the bridge. The Half Moon on the Knaresborough side of the bridge was being renovated which was most heartening as many old traditional pubs are ceasing to trade these days. The Half Moon is fighting back. Next to the renovation work on the pub stood a lovely antiques books and models shop. It was a shame it was closed. I spotted The Observer's Book of Ancient and Roman Britain in the window and quite fancied taking with me on my Hadrian's Wall walk planned for this year (2012). We walked on from the main road into Abbey Road and tracked south. 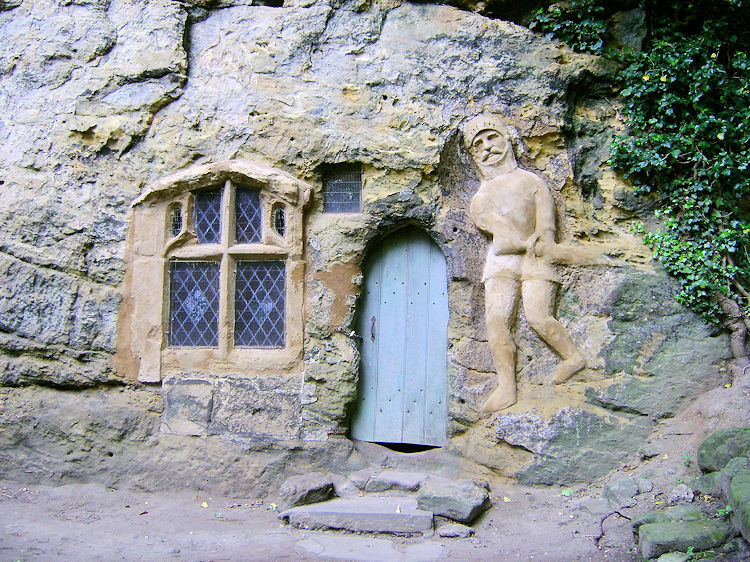 Chapel of Our Lady of The Crag 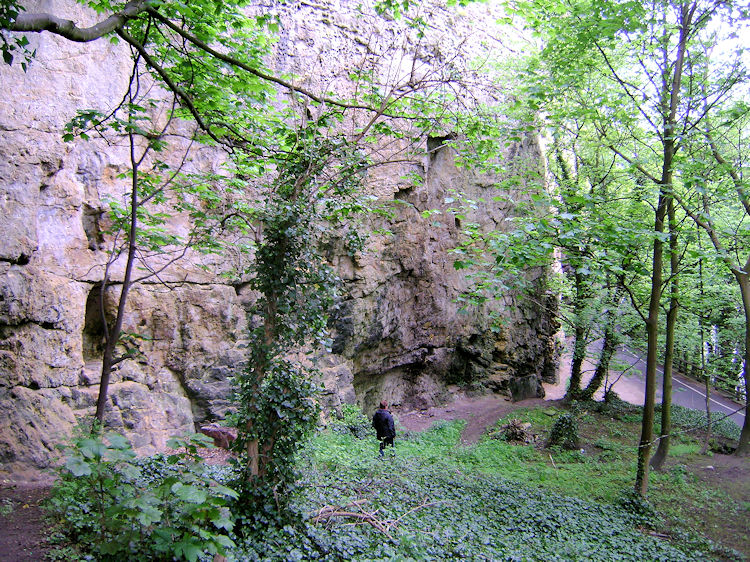 It was not long along Abbey Road before we came to our first interesting point on the walk. Up in the cliff face to our left stood a small building built into the rock. It is the Shrine of our Lady of the Crag, a small chapel with a carving of a Knight on the right hand side of the chapel door. The chapel was built in 1408 by John the Mason and to this day remains a very special sacred site. At the chapel there were other people asking about the history and significance. Dave did a professional job of being a tour guide for the visitors and explained some of the history to them. We all loved it and admired the site before carrying on with our walk of old and modern discovery. (Note: The chapel is now under trust management and has restricted opening times. See Chapel Opening Times here. ) 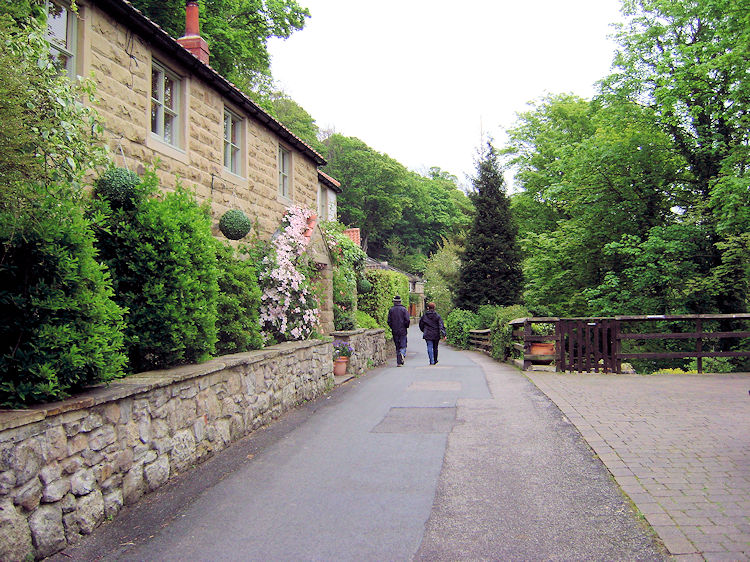 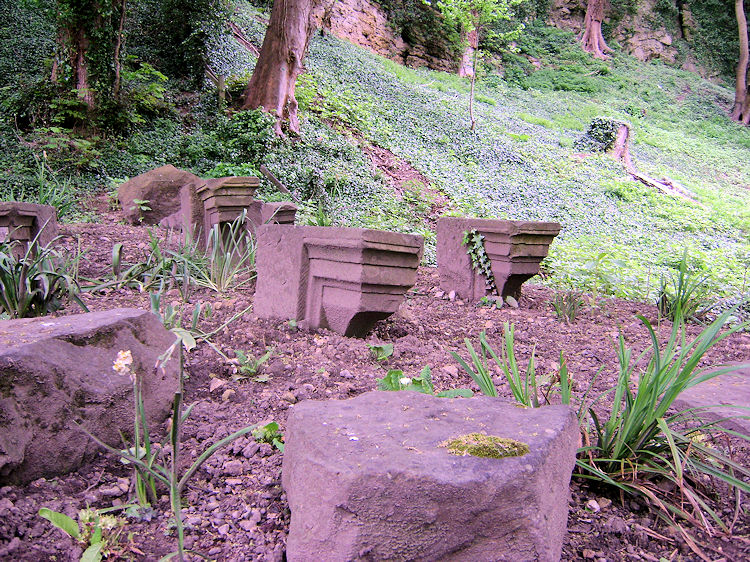 Rock garden made out of old building material

Continuing on our walk on Abbey Road Lil commented on the lovely well kept houses, some grand and some humble but all remarkably managed with much loved gardens to admire as we passed them. Every homeowner seems to have pride on Abbey Road and quite appropriate for they are charmed to live in such a wonderful setting. The only blemish on this section of the walk was traffic coming down the narrow lane, some of them at speeds not warranted for the surroundings. Lil snarled at a BMW which shot past us. Back to the gardens, one in particular had a very curious rockery, not of natural stone but of shaped stone from some grand building. Dave suggested they were parts of Knaresborough Castle as were some sections of the walls on Abbey Road. 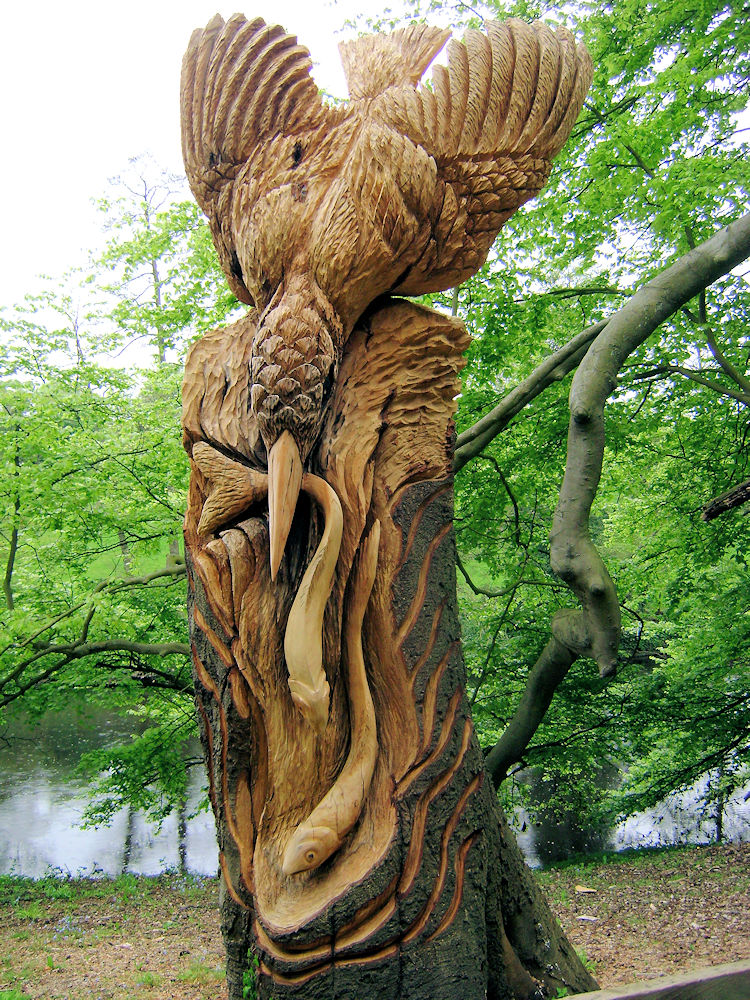 Wood sculpture of Kingfisher and Fish 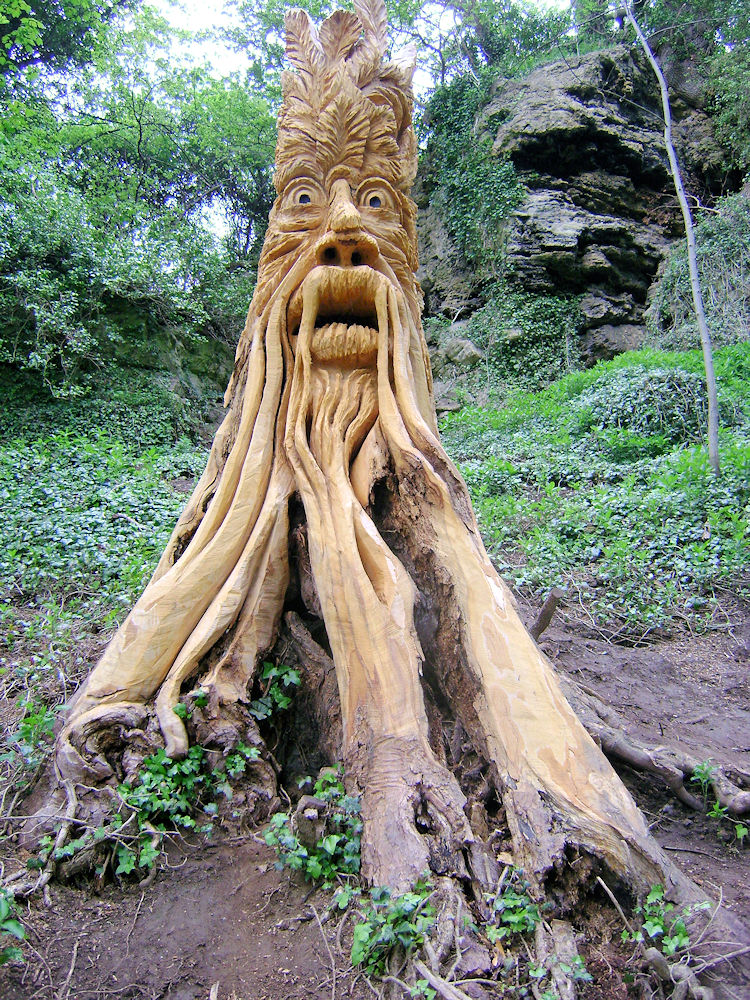 Wood sculpture of a tree man

We walked on further. Then we were stopped in our tracks. we had reached the first wood carving and I was immediately awestruck by the excellence of the work. The carving was of a Kingfisher diving for fish. Two fish are seen in the carving, one caught in the Kingfisher's beak and another scurrying away to safety. Lil and ave agreed with me, it was a stunning depiction, so much so it took me quite a while to draw myself away and continue the walk. Within strides I was stopped in my tracks again, dumbstruck by the second carving on offer, a brilliant depiction of a Tree man, much like Tolkein's living trees in the Lord of the Rings trilogy. His gaze was mesmerizing. 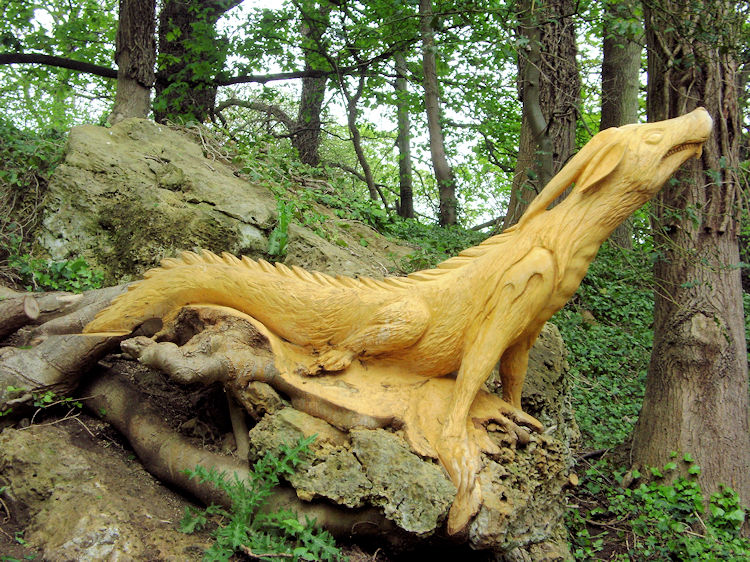 Wood sculpture of a Dragon 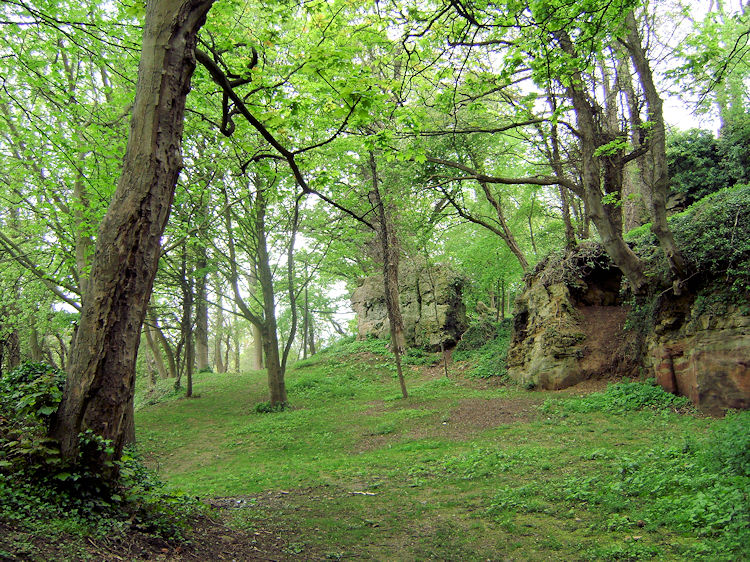 The tree man was set above Abbey Road to the left as we walked south along the road. He was amidst a lovely woodland setting as was the third and final wood sculpture we came to, that of a Dragon stretching his long neck out as if sensing the air. The sculptures are the work of Durham-based sculptor Tommy Craggs and he has done a wonderful job of making what is already a great walk much the more enthralling. I cannot imagine anyone who walks this way not being taken aback by the simply outstanding work he has done. And for those who like I value trees, Tommy will only work on trees that are diseased or felled for conservation purposes. I am reassured, what were magnificent trees keep some stature in the legacy of the artwork. 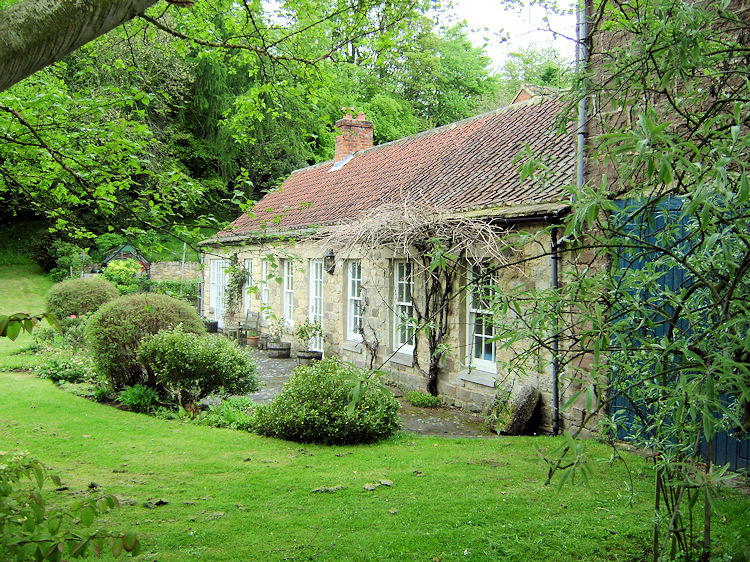 The Abbey is now converted into dwellings 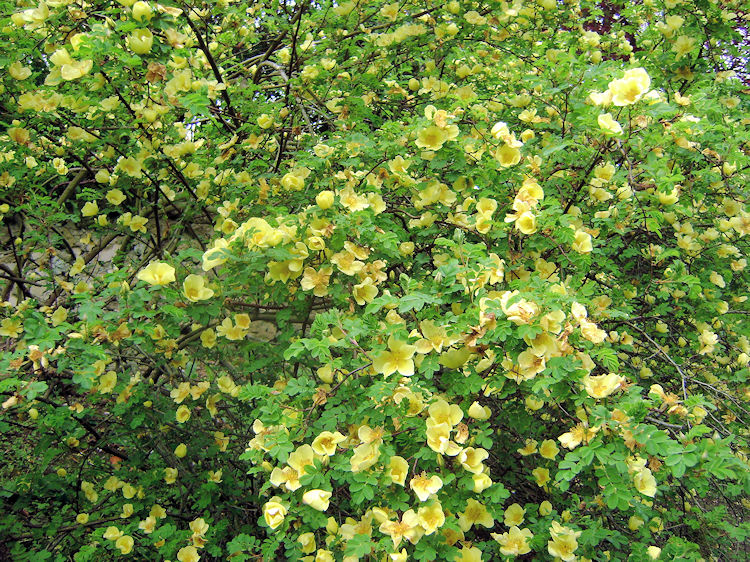 Fantastic flush of yellow and green

Lil, Dave and I caught our breath after completing the tour of the new art gallery in the most natural surroundings. Still beauty threw itself at us from all sides. To the right the river Nidd flowed quite vigorously after recent rains and to the left the trees, plentiful rock outcrops and fresh spring green on the ground kept our attention. hen without really noticing we arrived at the site of the old abbey (or Friary). The site was home to the Trinitarian Friars of Knaresborough, founded in the 13th century. It is now vacated by friars and managed by home dwellers. On the opposite side of the road to the abbey there still stands a fruitful orchard. As we passed the apple blossom was in full colour. 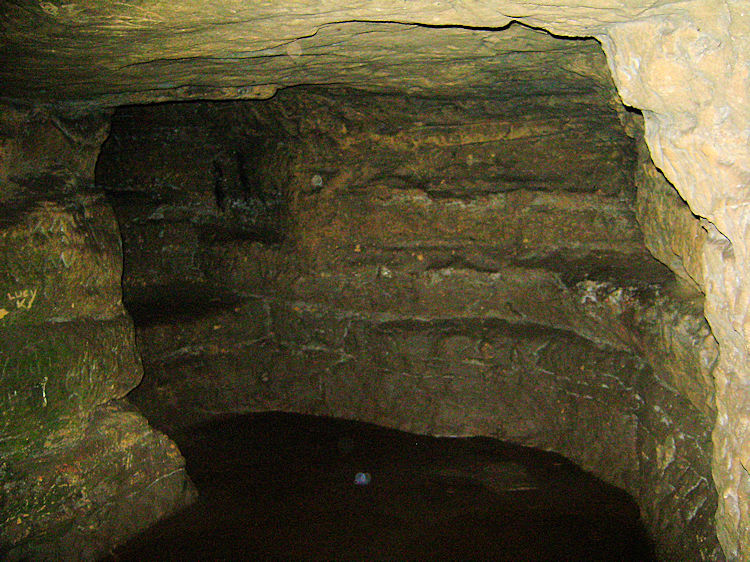 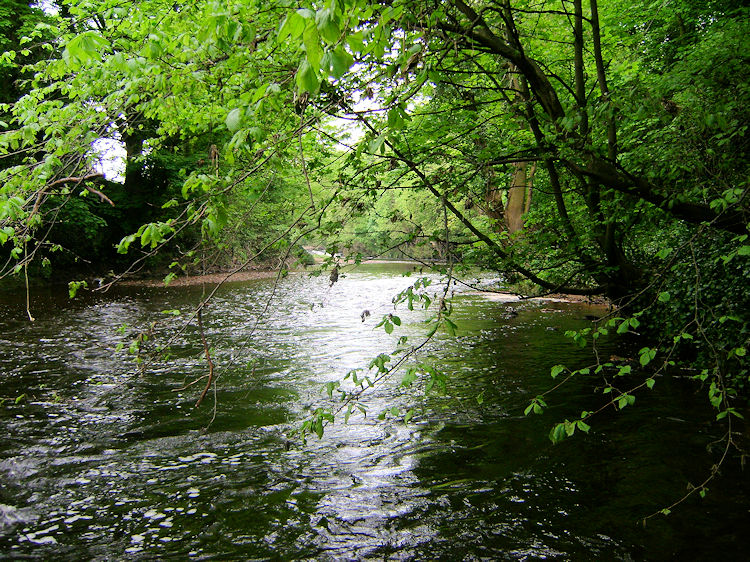 Shrubs and spring flowers were flush with colour on this mid May day. The weather was not exactly cracking the flagstones but only a very slight drizzle accompanied us on the walk and with all the tree cover we were not inconvenienced by it. Further we went southwards along Abbey Road until we reached our end goal. We had come to the site of St Robert's Cave which we reached by following a stepped path to a flat area about 10 feet above river level.

"Sitting snugly beside the River Nidd on the outskirts of Knaresborough, Saint Robert's Cave is a rare survival of a medieval hermit's home. This site once attracted thousands of pilgrims to this North Yorkshire town. Robert of Knaresborough lived on this site in the late 12th and early 13th centuries. Pilgrims flocked to Robert in his lifetime, and they continued to come to the cave in large numbers for centuries after his death in 1218. Pilgrims came to be healed of physical ailments, for spiritual direction, or simply to be in close proximity to the home of a revered holy man. Today, visitors continue to come to St Robert's Cave to see the place where this extraordinary man lived. The small cave is carved into the face of the limestone cliff, and the remains of a chapel and Robert's living area survive. The site retains a remarkable atmosphere of distant times" Source - Harrogate Borough Council.

Lil, Dave and I explored the cave but only the section through the door as it was waterlogged inside. Dave said "That's the most water I have ever seen in the cave" And he's been a few times. 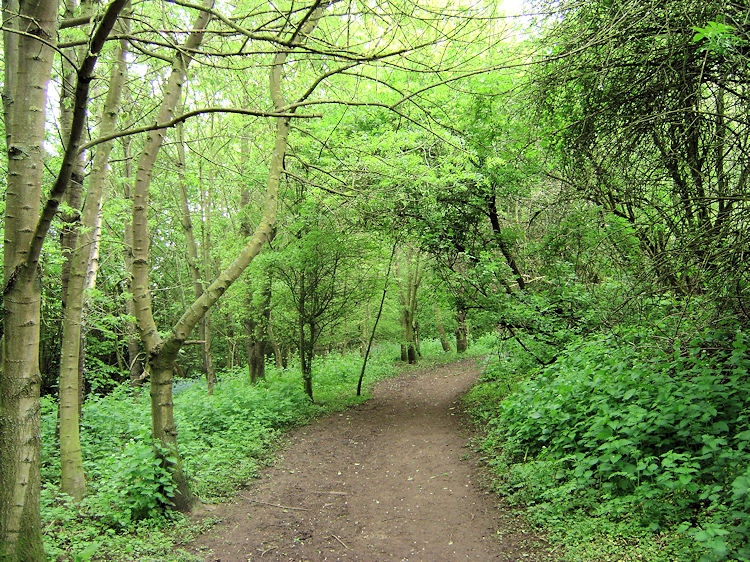 Climbing up from Abbey Road 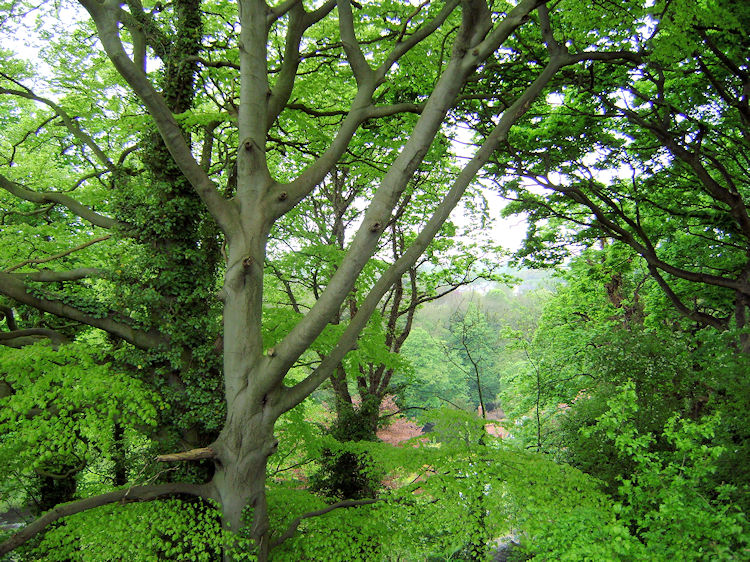 At St Robert's Cave I walked down to the bank of the River Nidd. St Robert's Cave is in a lovely secluded location and where I stood to take the photograph above so must the dwellers of the cave over the centuries. I was there to capture beauty, they will have been there to collect water. From St Robert's Cave we made our way back up the steps to Abbey road which we followed back this time northwards before turning off to head up a woodland track to above the limestone rock cliffs. The walk at a height of about 20 metres above Abbey Road was very good along tracks lined by trees. Sometimes we came close to properties but it was never imposing for we retained our attention on the view to the gorge of Abbey Road and the river with views now being provided beyond over the rooftops of houses in east Knaresborough and Calcutt. It was lovely being at treetop level, seeing a view which birds also do when flying above the canopy themselves. 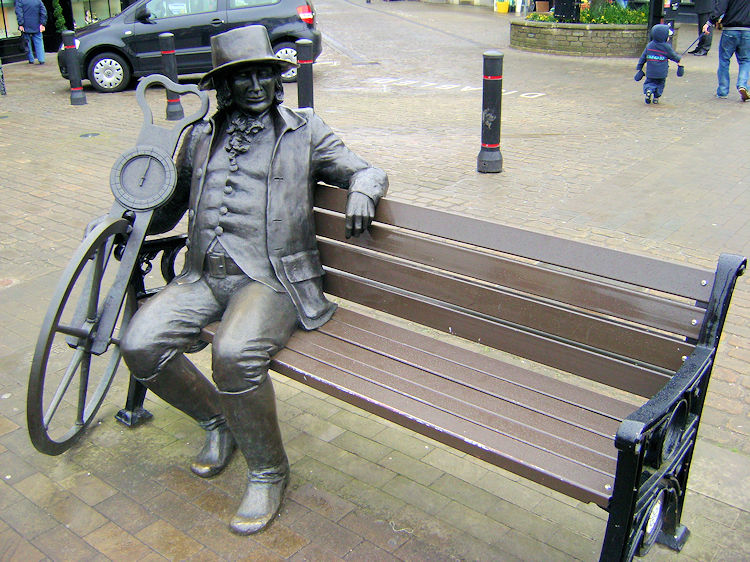 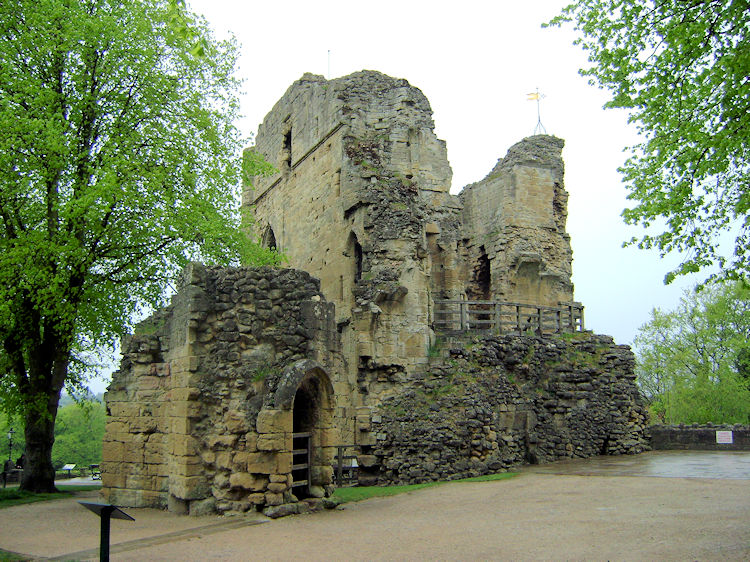 There were two highlights yet to come on the finale as we left the wooded tracks to follow street footpaths into the town centre. The first was in the town square itself as I made the acquaintance of Blind Jack of Knaresborough. Blind Jack was John Metcalf who lived a long life from 1717 until 1810. He was the most interesting of men, living a life without sight and yet achieving national fame as a road-maker and surveyor during the Industrial Revolution. After spending time at the statue of Blind Jack we walked back further in time from the Industrial Revolution to the Norman Conquests and Medieval Barons by visiting the ruins of Knaresborough Castle. The view over the Nidd Gorge in Knaresborough is stunning and a fitting end to our short walk. Lil was pleased.