Summary: This is a delightful walk which is popular with local ramblers and walking groups. It explores the countryside west of Ripon which is the most scenic quadrant outside the city. From Ripon the walk follows the River Skell through Hell Wath Nature Reserve before leading past Whitcliffe Wood to meet the Ripon Rowel Path at Whitcliffe Hall. The walk then follows the Ripon Rowel Path into the managed landscape of Studley Park and to Studley Park Church before turning course and heading back to Ripon via the Deer Park and the pretty village of Studley Roger. Once back in the city the walk concludes by following the A6265 into town, a route in which a lovely park can be visited and a number of Ripon's historic buildings can be viewed.

The Walk: It was the last day of March and the birds were singing vigorously as I woke to a bright sunlit morning. The joy of birdsong dictated to me that I had to go out for a walk but being without a car my options were limited. During breakfast I thought "Why not take the bus to Ripon? I have not planned a walk from there before". And so after breakfast and after preparing for a good day walk from the City of Ripon I walked the mile and a half from my home into the centre of Harrogate. Soon after I boarded the number 36 bus and forty minutes later I was stood outside Ripon Cathedral. It was 11.00am on what promised to be a beautiful sunny day and I was raring to go. 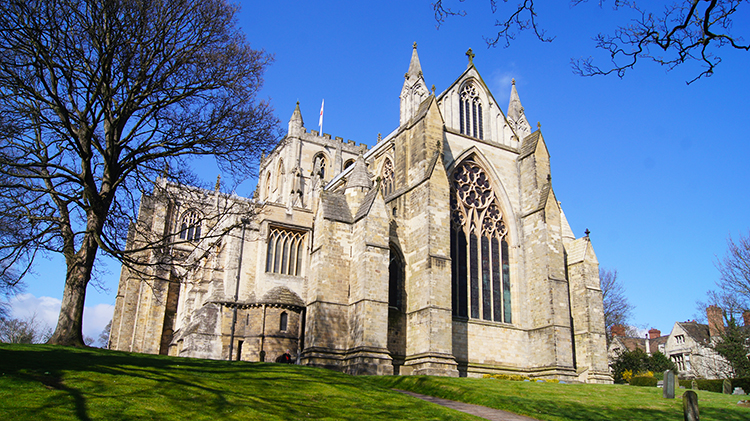 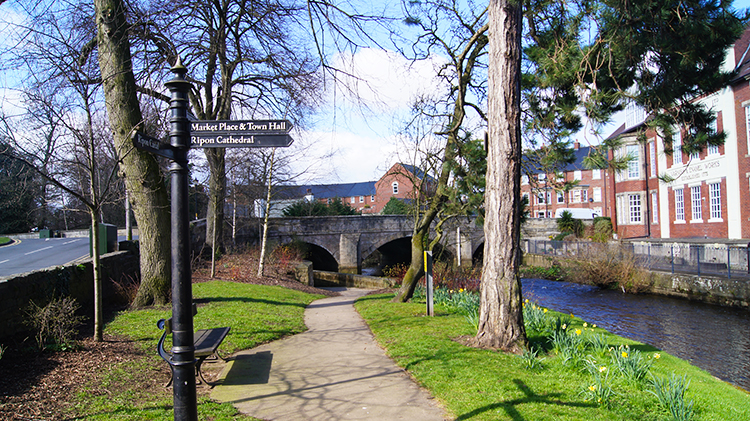 Ripon is a town in everything but name. It is the size of a town and it has the feel of a town, similar in size and character to neighbouring towns such as Northallerton, Thirsk and Skipton. But above the others, Ripon has a Cathedral and I stood in the grounds of it at the start of my walk. Ripon Cathedral is an imposing building, standing tall over every other building in the city. I walked all around the cathedral, admiring it from every angle before I set off on my walk out of the city by walking down Duck Hill and along Water Skellgate to reach the River Skell at Low Skellgate. There are desirable waterside properties at Lower Skellgate but the most impressive building by far is the Varnish and Enamel works of T and R Williamson Limited, built in 1775. 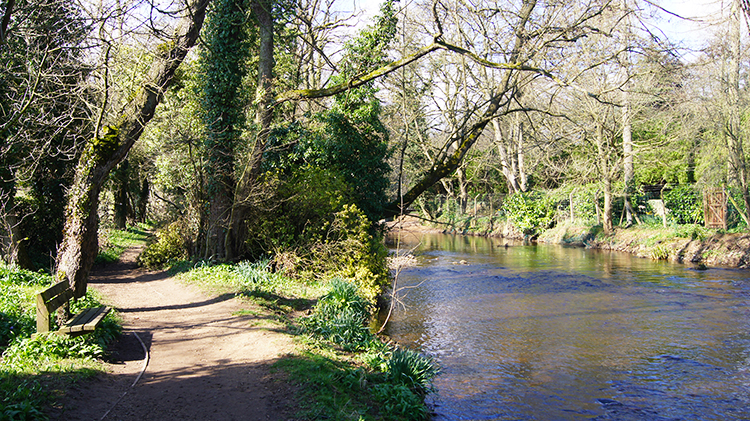 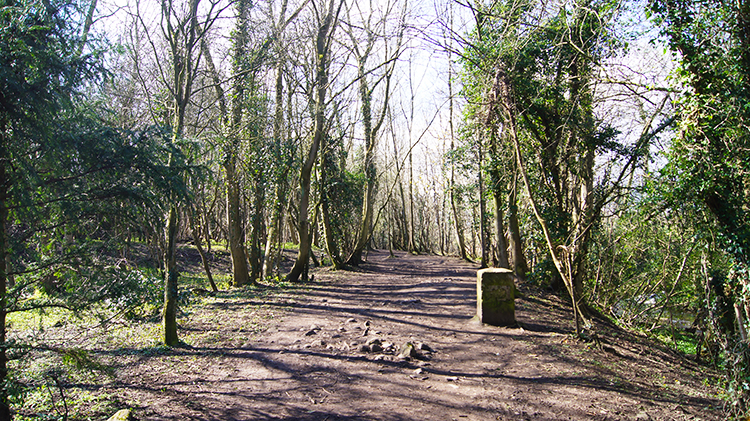 From Low Skellgate I followed Harrogate Road for a short distance and past a small park to reach Borrage Green Lane which led me out of the built up area and on to a delightful riverside walk. While it was still too early in the season for trees and hedgerows to be showing any leaf the grass on footway verges was beginning wake from winter slumber and daffodils were in full flourish. The air was warm with sun higher in the sky than it had been for six months. I was loving it. I met and greeted a few walkers on the riverside path and I watched one man paddling in the river while his Labrador companion swam in obvious delight. Spring makes us all smile. Still by the river I walked through Hell Wath Nature Reserve. Birds were singing in the trees, particularly Blackbirds and Robins. There was a strong scent of wild Garlic in the woodland of the nature reserve too. Delightful it was. 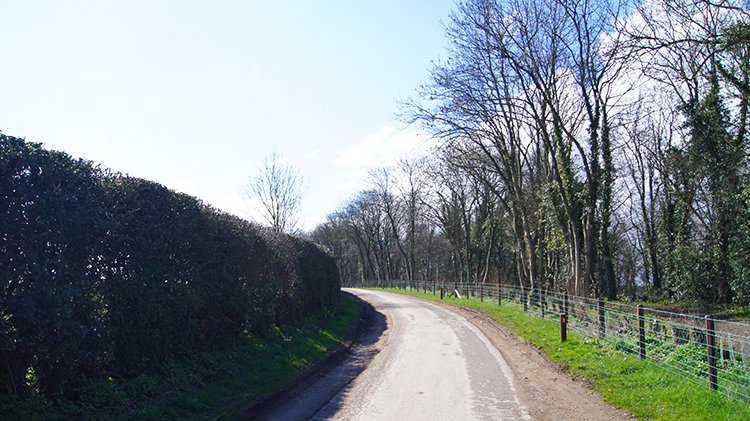 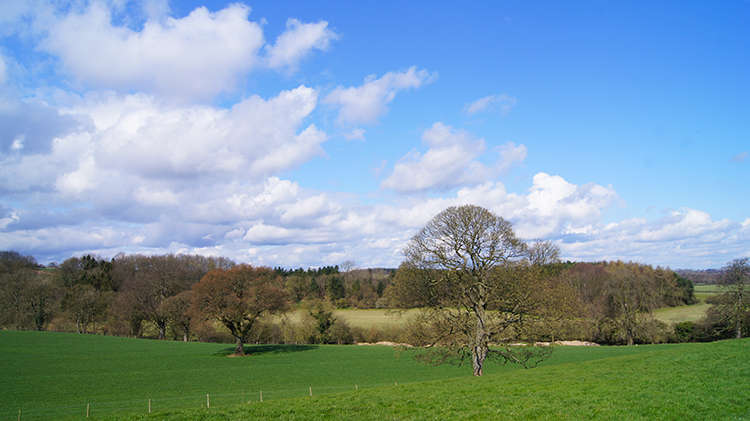 On the south side of the nature reserve I left the riverside and emerged at Hell Wath. There were two signs beside the path. One was about the Sanctuary Way, a 10 mile footpath which circumnavigates the city. One for next time I thought. The second sign was outside a sports field and said "Welcome to Hell Wath Open Space: Football". I left the signs behind, passed the houses of West Lane and continued down a county lane, passing by Whitcliffe Wood which is managed by Yorkshire Wildlife Trust. Further along the lane and just after I had passed Whitcliffe Hall I crossed over a stile and into the first green field of beautiful North Yorkshire countryside. 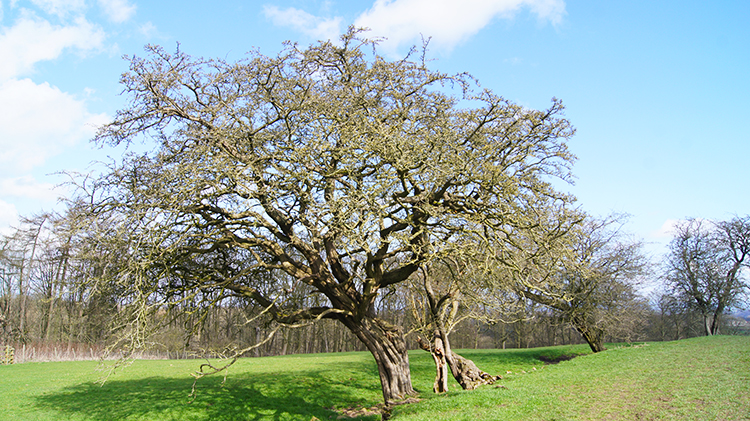 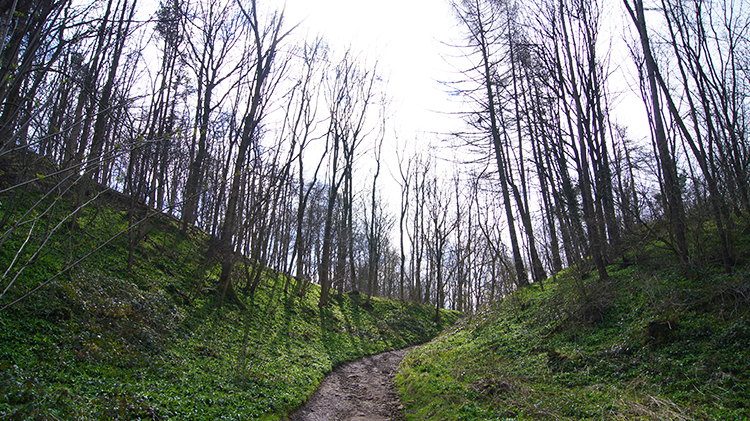 Everything was so quiet on the walk across the field on a gentle incline to the north of Hum Hill, all of 100 metres high! This is not a walk to worry about inclines, while I rate it as moderate because of its distance, the going is very easy throughout. Well, nearly all of it that is, apart from one diversion I make in the park which I will come to soon. For now, back to my gentle walk which changed in character after crossing the north slopes of Hum Hill. From the field I entered a plantation which led me down a path shielded from the elements by an earth bank flourished with wild garlic and guarded by tall upright trees. It was a suitably grand entrance way into Studley Park. 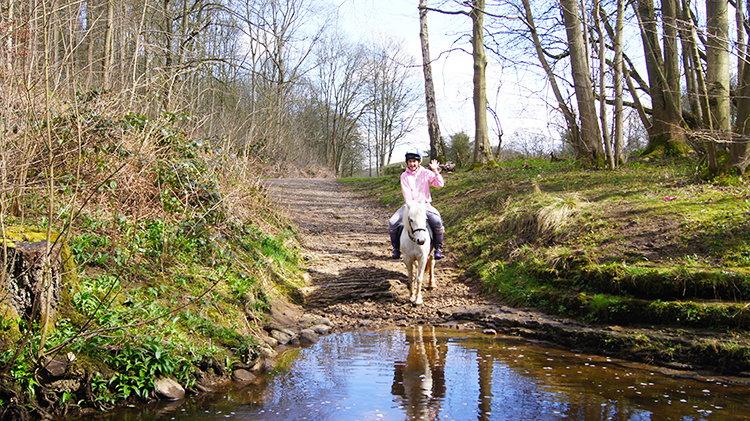 Pony rider greeting me at the River Skell ford 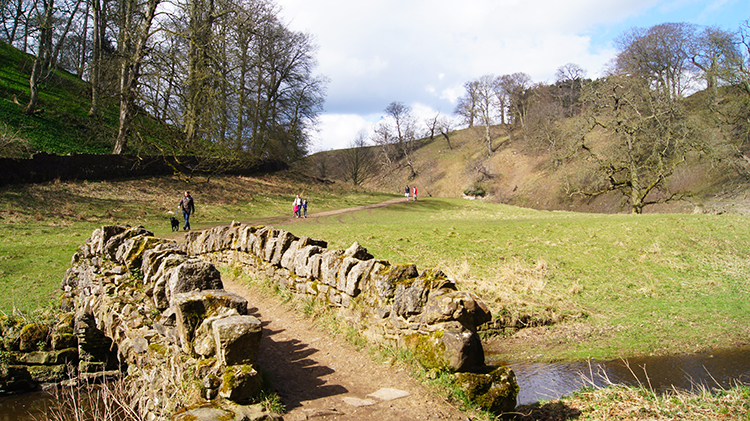 At the bottom of the bank the path led me to a ford over the River Skell which I had left earlier on at Hell Wath. At the ford was a young lady on a white pony who waved to me across the water. She said "He will not step into the water" and true enough after a bit of unsuccessful coaxing she turned her pony around and headed back along the lane from where she had come. "Oh well, have a nice ride anyway" I said. "Thank you" she replied as the pony trotted away. Rather that paddle across the ford myself I walked a little further to make a dry crossing of the River Skell which I then followed upstream into Studley Park. 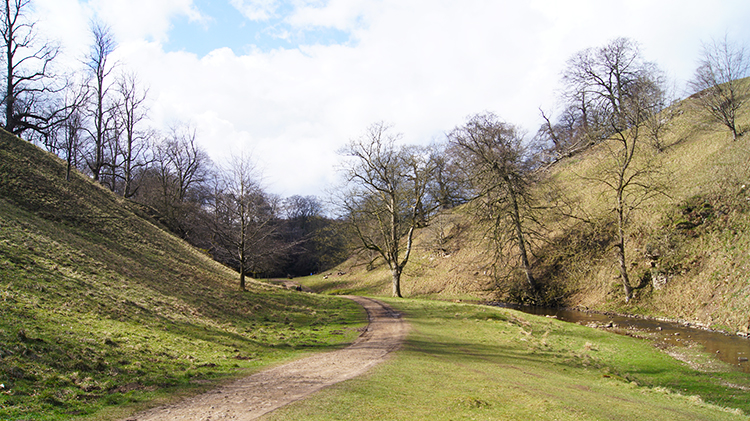 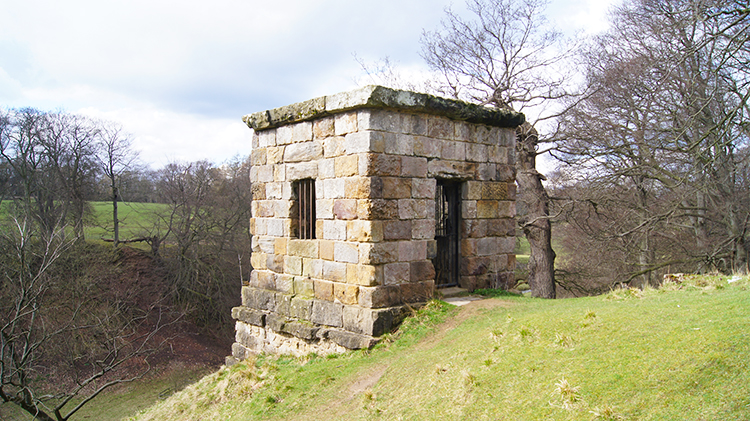 I walked westwards into Studley Park, meeting and greeting other walkers at regular intervals. I had seen none before I had reached Studley Park. Now I was seeing plenty. Soon after walking on the path set beside the river and which is steeply banked on either side I reached a point where a folly stood on top of the steep bank. Now we come to my less than easy part of the walk I mentioned a couple of paragraphs ago. Of course I had to make the steep climb, up to the Devil's Chimney. It was steep and I was puffed when I got to the top. It was worth the effort though. The Devils Chimney is a garden feature dating from about 1740 and said to be a representation of the Mausoleum of the Horatii and Curiatii near Rome. The folly originally had four pinnacles to resemble the ancient mausoleum but is now merely square, more like a representation of a fortified defensive pillar box. 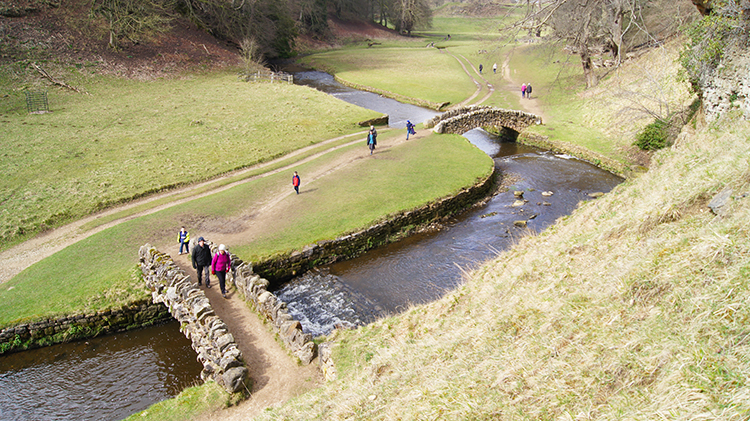 Looking down from Devil's Chimney 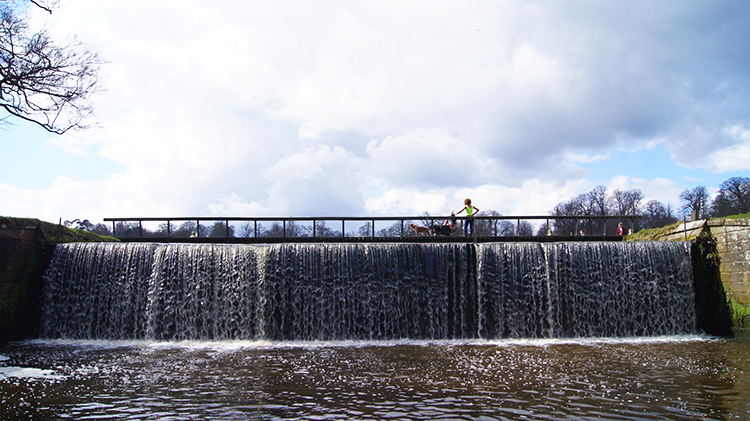 When I was up on the top of the steep bank beside the Devil's Chimney I noticed the iron railed door was open and so I went inside which gave me a good view for watching people walking and crossing the stone footbridges across the River Skell on the parkland walk below. It was a peaceful scene to enjoy. Some of the walkers below noticed me waving from inside Devil's Chimney and waved back. More noticed me on top of the bank after I had left the building and contemplated the climb themselves. Of course the children from one family had to make the climb and I watched them struggle up the bank while I steadily clambered down. Once back on the riverside walk I continued on further into the park, eventually reaching Studley Lake Weir. 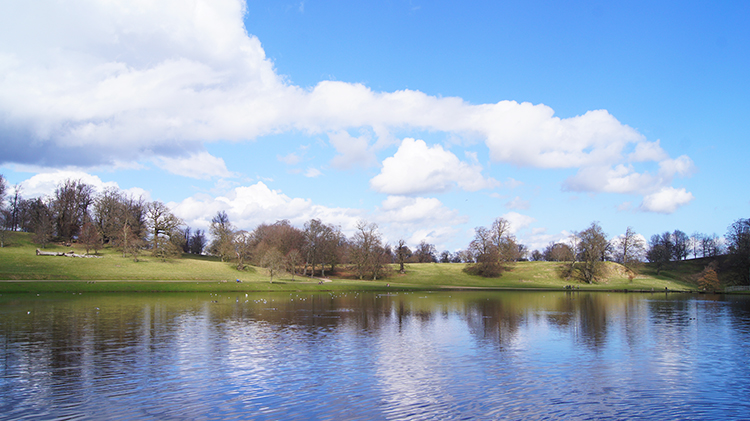 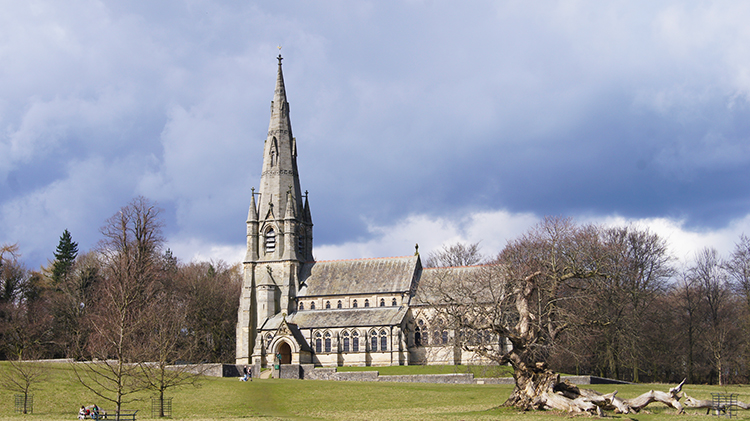 Beyond the weir I arrived by the side of Studley Lake. I enjoy being at the lake so much, always being impressed by its beautiful setting. The lake is the main feature of Studley Royal Water Garden which was created by John Aislabie in 1718, the same year he became Chancellor of the Exchequer. Until I researched for this piece I never knew that. Reading further about John Aislabie I have the utmost respect that when inherited the Studley estate he started serious development of the park and introduced the natural landscaping we all enjoy now. Studley Park is immensely beautiful, there is no doubt about that and everyone I encountered on my walk were enjoying the surroundings as much as I. All had contentment in their demeanour. After watching folk admiring the view of the lake and watching the wildlife which crowds around the south-west side of the lake in the hope for tit bits I climbed north-west across the park towards St Mary's Church. 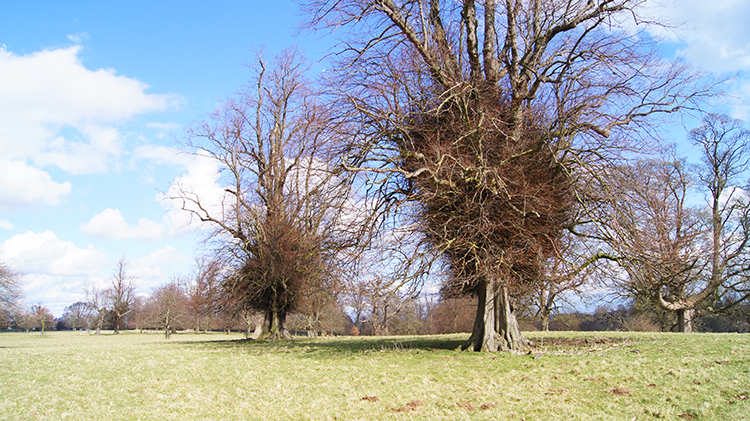 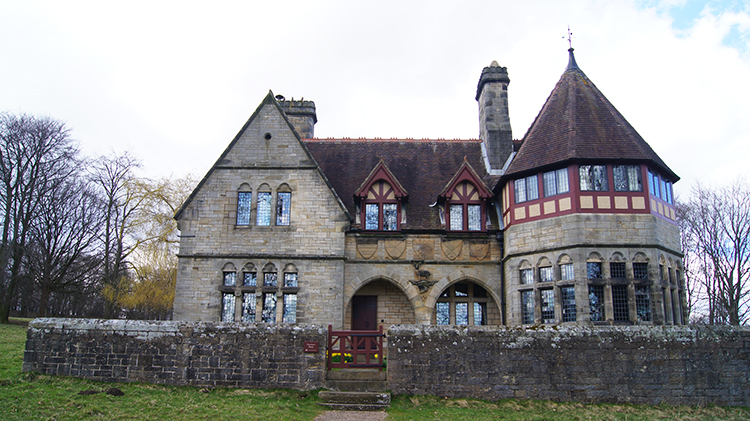 I looked for one of the deer herds while I walked from the lake to the church as they are usually grazing or resting in this area of the park. There are red, fallow and sika deer resident in Studley Park. I generally see some of them when I visit the park but frustratingly I could not spot any this time. They were elsewhere in the grounds. I compensated with my failure to spot the deer with an extended observation of the fine buildings I had now arrived at. St Mary's Church is an impressive building, as is the Chorister's House which is found just east of the church. Both St Mary's Church and the Chorister's House were designed by the acclaimed and flamboyant architect William Burges. Both church and house have Gothic characteristics, Enjoy looking over his works as I do before continuing the walk. 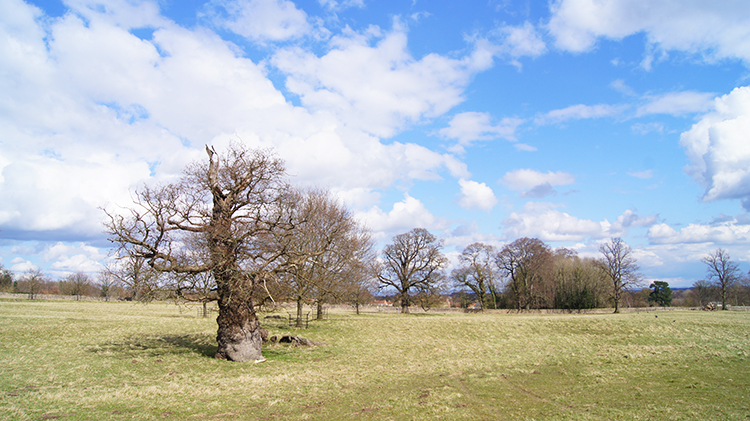 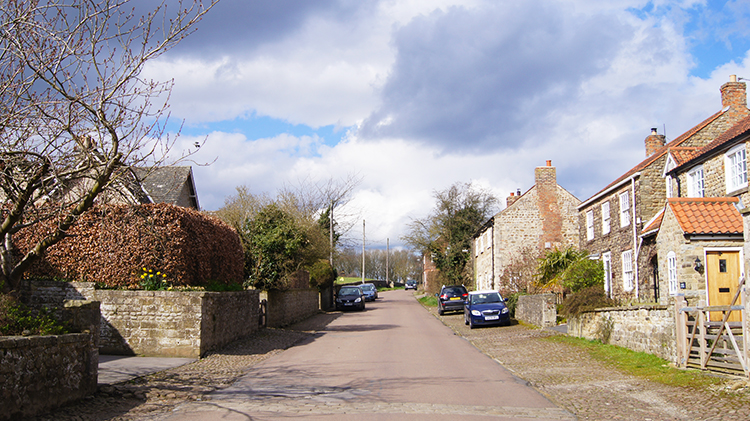 The next stage of my walk was across the wonderful sprawl of parkland set in the northern sector of Studley Park. I crossed from west to east, heading towards the gorgeous small and isolated village of Studley Roger. As I crossed the park I looked across to the North York Moors which were clearly in view in all their glory on this very clear early spring day. I could see all the hills which I explored in my youth, the Hambleton Hills range stretching from Osmotherley to Sutton Bank. The north of Studley Park seemed to provide the perfect vantage point and I savoured the view. The enjoyment of the distance views to my familiar views and close up views to the pristine park saw me sadly leave Studley Park and arrive in Studley Roger in what seemed no time at all. The village was at peace as I walked through the one street which is the village. As it ought to be. 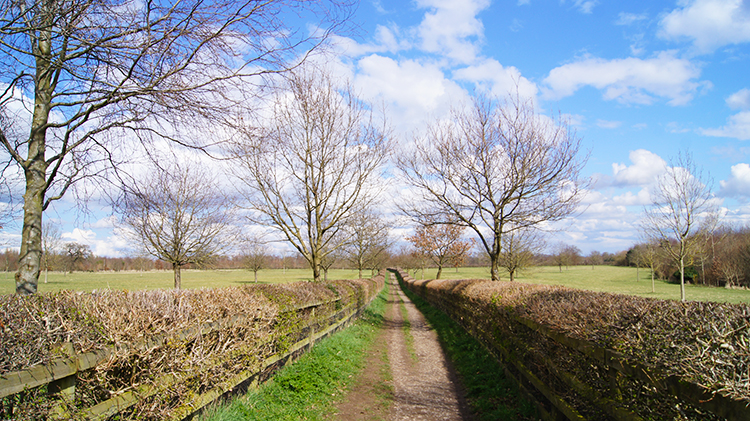 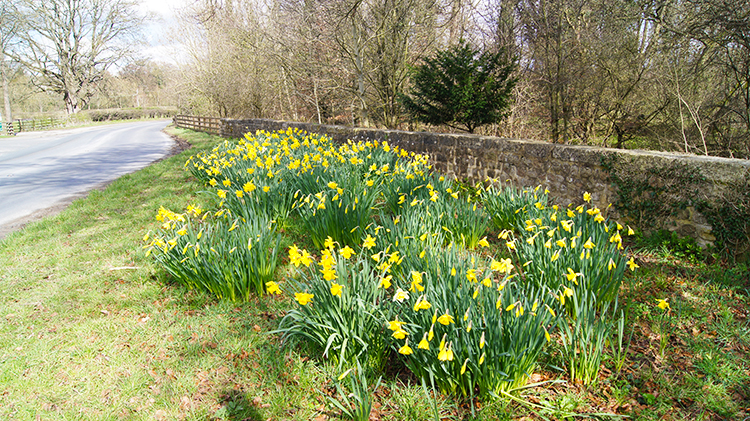 From Studley Roger I followed a lane with perfectly cut hedgerows on either side. It could well have been a garden hedge as there was no irregularity to the cut in the full half mile of walking alongside it. I watched a Buzzard roosting in one of the naked trees in a field to my right as I walked by. The Buzzard watched me with the same intensity I had watched it, turning its head all the time in total focus on my passage. I love such respectful observations. Soon after I came to the side of the B6265 Pateley Bridge to Ripon road which I would follow back into the city. A bank of full flower Daffodils graced the verge on the roadside. 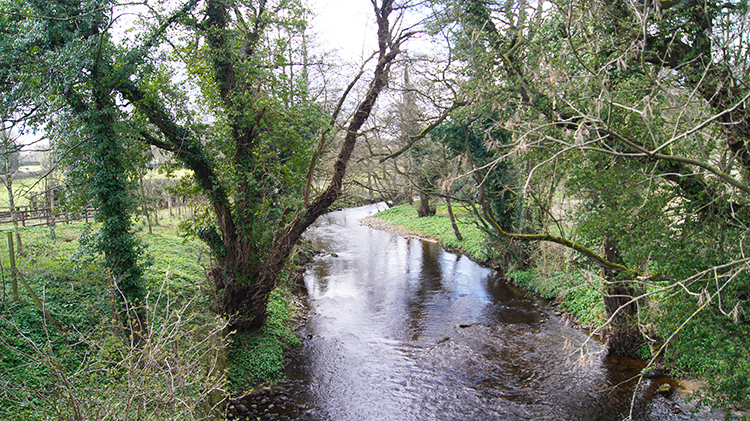 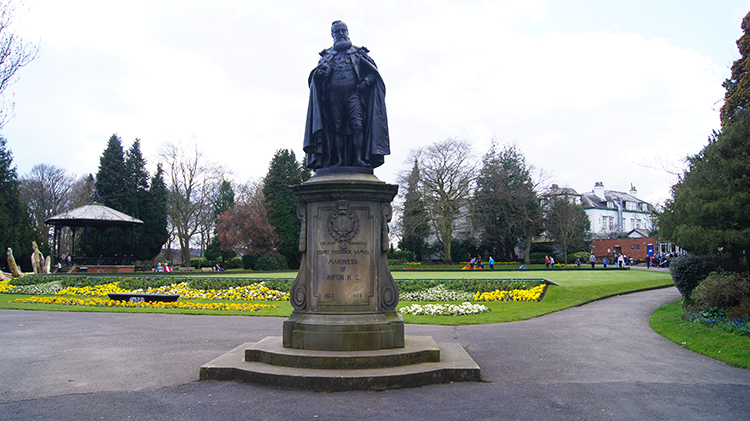 I walked along the roadside and crossed the River Laver which in just less than 500 metres would terminate and flow into the River Skell. After crossing the river I walked on the footpath along the road, first past the ground of Ripon Cricket Club and then past Ripon Spa Hotel. Next I came to a park with youngsters playing football in a playing field and then I arrived at the Art Nouveau building of Spa Baths which were officially opened by Princess Henry of Battenburg on 24 October 1905. Then I arrived at Ripon Spa Gardens before I arrived back in the centre of the city and the end of my lovely walk.