The Monsal Trail and Monsal Dale

Summary: This is a super walk in the Peak District that was done by Owain Roberts and his friends in the Sheffield Hallam University Fellwalking Club during April 2008. The walk leaves Bakewell and heads west to Monsal Dale and then south, east and north over Peak countryside before returning to the starting point in Bakewell. 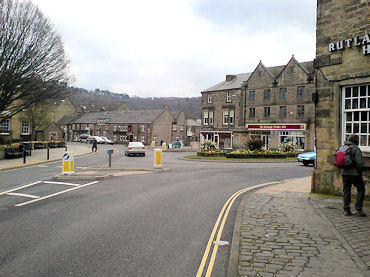 Bakewell, the starting point for the walk 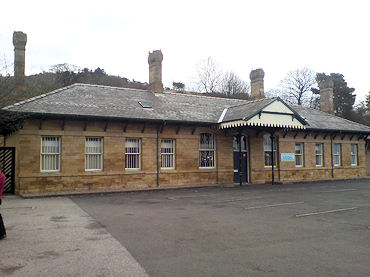 When Mike asked me to prepare a guest walk for his website it was an opportunity which I could not refuse. Much has been written about walks in the Dark Peak including those Hope Valley, Kinder Scout/Edale etc but the White Peak area and in particular that surrounding Bakewell has many walks of note some of which include a number of interesting sites and curiosities. It was with this in mind that seven members of the Sheffield Hallam University Fellwalking and Mountaineering Club set out from Bakewell on a circular walk taking in Monsal Dale and returning via the Magpie Mine and the villages of Sheldon and Over Haddon. 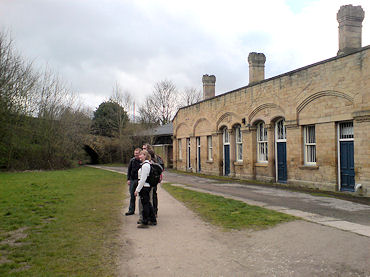 The beginning of the Monsal Trail 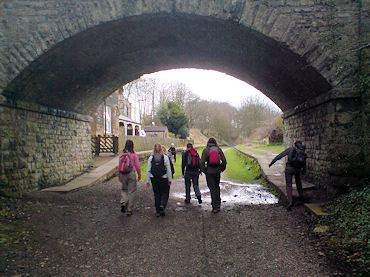 Walking along the Monsal Trail towards Monsal Head

The walk was one that I knew relatively well having completed it on a previous three occasions but it was the others first time so I was interested to see what they would make of it. After a 45 minute bus journey from Sheffield we were ready to head out of Bakewell and towards Monsal Dale. We made our way up the steep road towards the former Bakewell Station and onto the Monsal Trail. Although the railway line closed as long ago as 1968 the station building is well preserved and now functions as the headquarters for a local business. We made our way behind this and set off west along the trail. 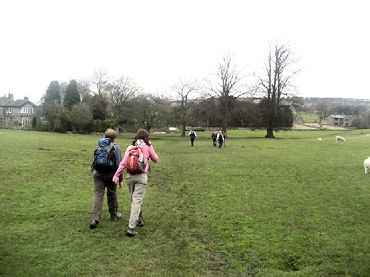 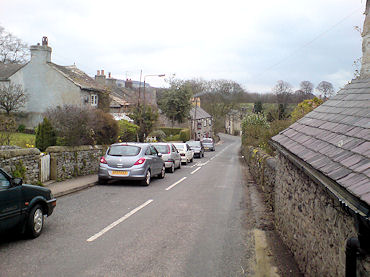 As a former railway line the trail is completely flat and the good quality surface to the path enabled us to make swift progress. Although the trail is located on a former railway line there are only a few reminders left of this. Nevertheless Steve who is a student of railway engineering was able to point out the occasional feature such as a discarded platform or the odd piece of former signalling equipment. We continued on down the trail contemplating the fact that less than 45 years ago trains would have been puffing up and down the line between Bakewell and Buxton and discussing the latest eccentric antics of Dan who is one of the more colourful members of our club. After around two miles the pathway leaves the former railway line as the way ahead is blocked by a tunnel. We made our way across farmland towards the village of Little Longstone. Once in the village the pathway is along pavement all the way to Monsal Head. We passed through the village admiring the quaint houses and the pub (The Pack Horse Inn) but it was too early in the walk to stop. 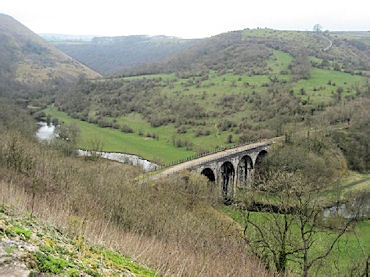 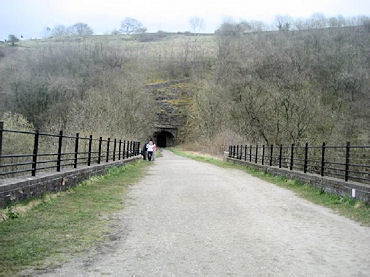 The view from Monsal Head is one of the most spectacular and photographed views in the Peak District and we stopped for a short break. Matt was keen to stop for lunch and an ice cream from a nearby van but I insisted that we must continue on for a while yet since the more challenging sections of the walk lay ahead. We took one of the steep paths down the valley towards the Monsal Viaduct. The skies were now grey and threatening and there were a few drops of rain in the air. This was of concern to most of us since few of us had decided to bring waterproof trousers! Fortunately the weather was to hold out for the rest of the day. On arrival on the viaduct we were able to view the mouth of the tunnel which we were forced to divert the trail for earlier on. Surprisingly the tunnel was not bricked up and instead there were a large pair of metal doors. We peered through the dark gaps wondering what might be stored inside.... 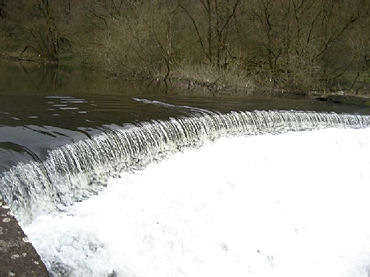 Weir on the River Wye 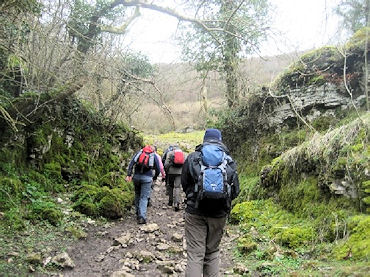 We quickly crossed the viaduct before immediately taking a left turn to follow the banks of the River Wye. The weather had been wet recently so we were pleased to find the river in full flow which presented a good photograph opportunity at the weir. From here we continued through moderately wooded terrain to where the path crosses the main A6 road from Bakewell to Buxton. Once across this road there is a small picnic area but we mutually agreed it would be a mistake to stop here before tackling the toughest section of the entire walk. 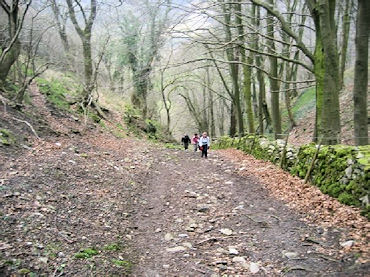 The steepest section of the walk 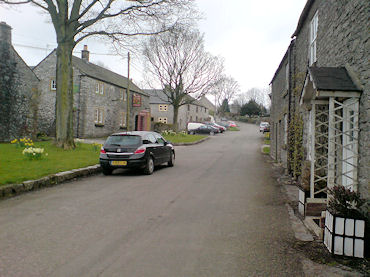 The village of Sheldon

This section begins with a steady climb before reaching a stream, which may be bone dry, or a raging torrent (I have experienced both!). It is necessary to walk up this stream for about 10 metre before reaching a stile and this made a pair of walking boots a necessity (the stream was in full flow) as Jo found out to her cost - the water was more than a match for her walking shoes! Once across the stile the path became ever steeper until we reached a stone wall where the path divided to Ashton-on-the-Water or Sheldon. We paused for breath and looked tentatively up the steep path we knew we must take to climb fully out of the Dale. The path is relatively short but can present a real challenge in autumn when wet leaves are on the ground. Fortunately today was OK and we were glad to reach to the top. Emma was keen to continue for a bit but the rest of us wanted to stop for lunch and so we did. 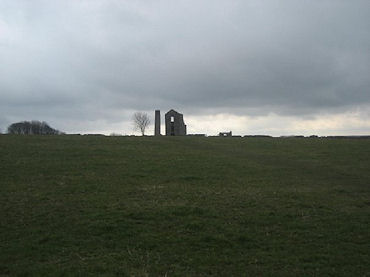 Grey skies over Magpie Mine 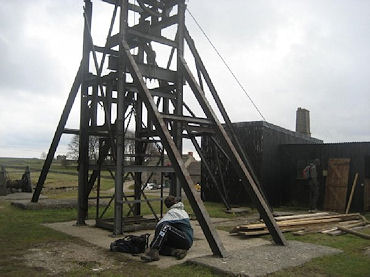 The winding gear of Magpie Mine

Following lunch we continued across rolling farmland to the village of Sheldon, which is a very picturesque little settlement. Here there was an enticing looking pub (The Cock and Pullet) but it was too soon since lunch so after a short distance on the road we took a right which returned us to farmland paths. As strolled along we could see the next highlight of our walk on the horizon - Magpie Mine. This was one of the most famous lead mines in the Peak District up until its closure in 1952 and today is something of a heritage attraction. We took time to admire the old buildings and threw a couple of stones down the now covered but still incredibly deep mine shaft (around 6-7 seconds till they reached the bottom!). Afterwards we continued south before meeting a public road. The next short section is on public roads but we did not mind since the traffic was light. After taking the first left we continued down a hill before taking the first footpath on the right hand side. After a steady climb we knew it was going to be downhill all the way to Over Haddon and then Bakewell. We crossed the farmland encountering a few menacing looking bulls on the way although there were also views to enjoy of the forests surrounding Bakewell and towards Lathkill Dale where some of us had previously walked. Soon we were in the village of Over Haddon, which is another typical attractive Derbyshire Peak District village, and we were back onto the road for another 1000 yards or so. After Over Haddon we took a left so we were now heading back directly towards Bakewell. After a short cut down and then up a small valley (this cuts out a very short section of road!) we continued down a road before taking a right back onto paths. This entrance was easy enough to miss and indeed Jess and Steve who were at the front managed to walk straight past it. We were now in our immediate descent into Bakewell. We passed school playing fields and through small residential estates and before we knew it we had arrived back in the centre of Bakewell. 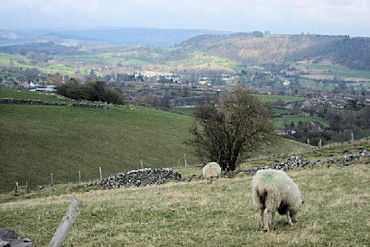 View over the countryside towards Bakewell 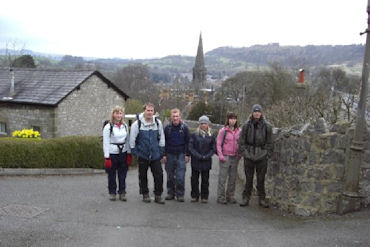 We checked the times back to Sheffield at the bus stop where a very eccentric man wanted to talk to us about the bus timetable so we left Sam with him (much to his annoyance but he caught us up soon enough) and went in search of an ice-cream before retreating to the pub for a pint. Whilst we were there Emma remarked that it had been the most interesting walk in the Peak District that she had been on. I would have to agree as it really does have something to offer everyone. With this mind we made for the bus stop and set off back to Sheffield giving us time to reflect on what a great day out walking we had just experienced.