Summary: A thoroughly enjoyable walk with interest throughout the whole five and a bit miles which starts immediately after taking the path down from Starkholmes to the entrance to High Tor. The climb to High Tor is delightful through lovely deciduous woodland but the seclusion is abruptly shattered once the top is reached and the breathtaking views to the gorge below, Matlock Town and Riber Castle are revealed. From High Tor the walk descends to the gorge at Old Matlock before climbing again via Shining Cliff to Matlock Dale and the Heights of Abraham. Then more fantastic woods are enjoyed before descending to Matlock River Gardens and then up and on to Matlock Bath Station & returning to Starkholmes.

The Walk: It was a lovely August morning, not many of those in a most disappointing summer when I arrived in Starkholmes to begin this most anticipated walk. I had often driven through Matlock and Matlock Bath along the A6 Derby Road looking up towards the Heights of Abraham and the limestone cliffs of High Tor not thinking about what it would be like to walk around the tops and look down. Now was my chance to find out what I had been missing. 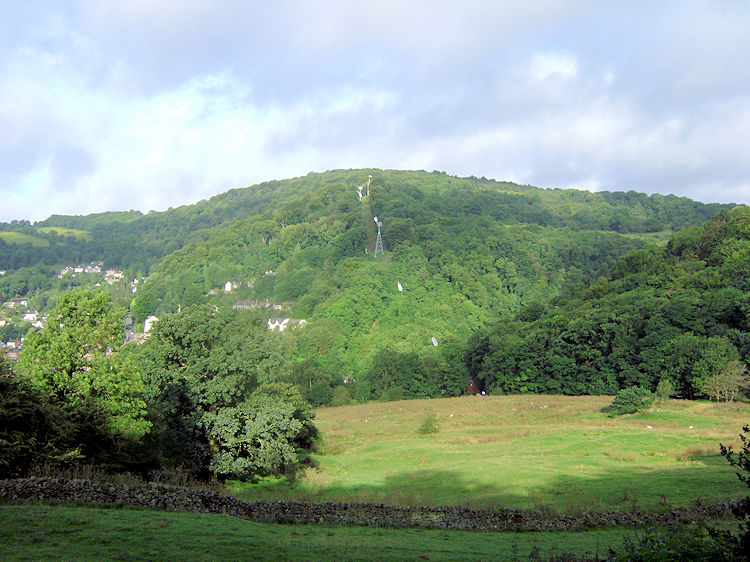 The view to the Heights of Abraham from Starkholmes 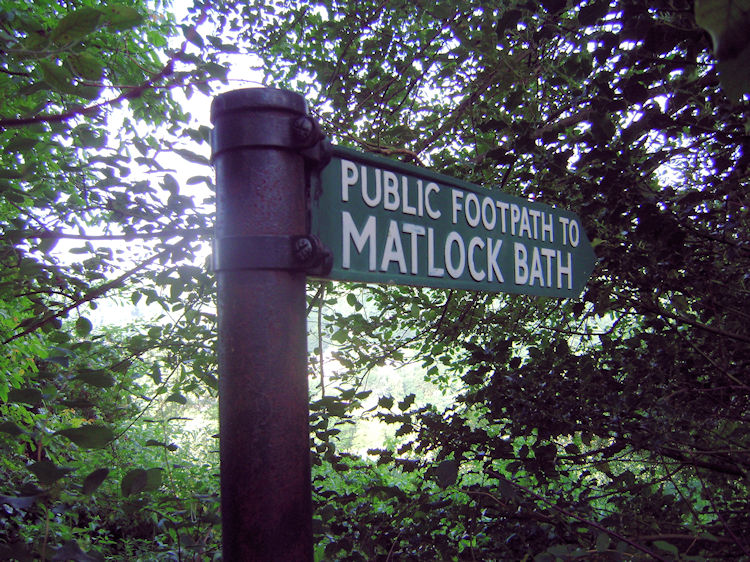 I set off from the elevated village of Starkholmes, reason being not knowing how easy it would be to find suitable free parking in the gorge. Ideally there was a parking area outside the small park that is home to the village war memorial so I pulled up there and after assembling my gear set off along the public footpath which leads north and west towards Matlock Bath Station. The views straight over to eights of Abraham were enticing and I walked westwards in very good spirits. The sun was shining, it was nice and warm, ideal for the five miles ahead of me. 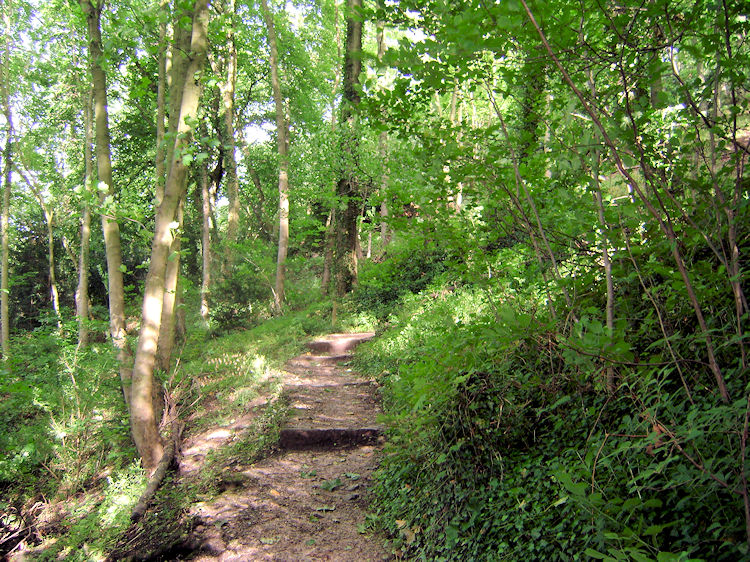 Woodland leading up to High Tor 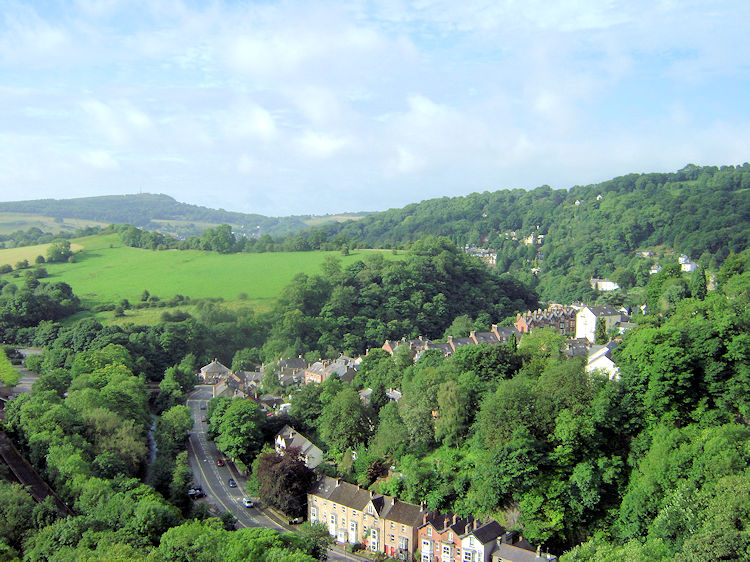 The view south to Cromford from High Tor

Soon I came to a pillared gateway and archway indicating I was about to enter High Tor Grounds. Taking the invite willingly I did so and immediately began a winding climb up through delightful woodland. At several points I came across signs warning of the dangers around. They read "The BMC recognises that climbing and mountaineering are activities with a danger of personal injury and death. Participants in these activities should be aware of and accept these risks and be responsible for their own actions and involvement" Strong words indeed, I heeded the words and continued with caution. The path through the wood was no risk however and sticking to the path the thing to do. I was aware that exposed edges were nearby though. On occasion near to the path on the west side of the zigzag up were more warning signs nailed to sections of fence. These said "STRICTLY NO PUBLIC ACCESS. This is not a public footpath and is not maintained by Derbyshire Dales District Council" I did not cross over the fences. Soon after I discovered why as I emerged on the proper path to open ground. 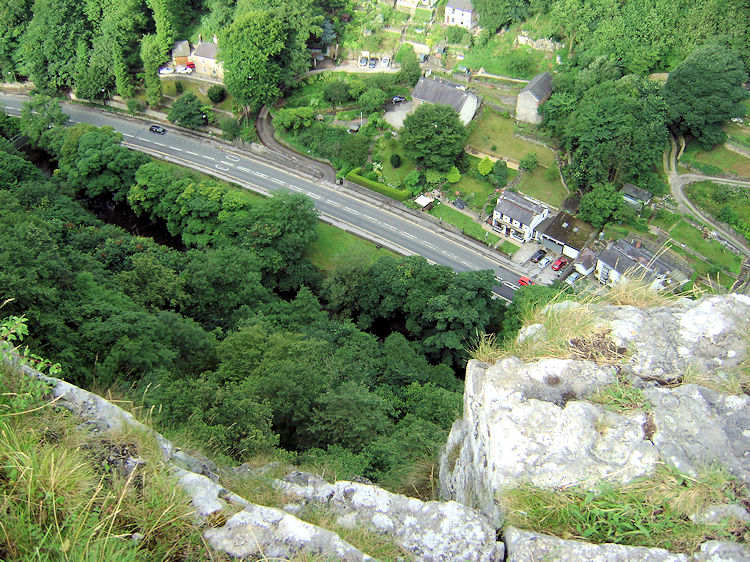 It is a long way down 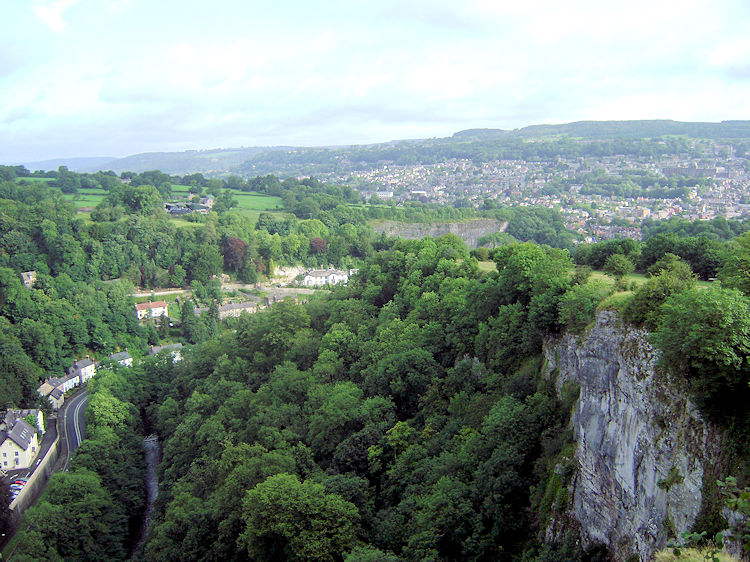 The view north to Matlock from High Tor

Once there I walked carefully towards the edge of the bank and crawled a little further to peep over the edge of a sheer limestone cliff to the deep expanse of the gorge. It was awesome and toe curling at the same time. The view down to the traffic passing along the A6 was stunning as was the sight of the tree lined River Derwent flowing parallel to the road. Looking to my right and left the limestone cliff and its scattered shades of grey and white was sight to behold. I laid down still and safe with my head over the edge for quite a while taking it all in before crawling backwards slowly and then safely standing to continue the walk. As I did by crossing a field and then following a track down toward Old Matlock I looked over to Riber Castle, another awesome sight. And there was more still, a fantastic view of the terraced rows of houses on Matlock Bank in the new town. It was all so extra special and with all to behold I bounded down the track in high spirits. 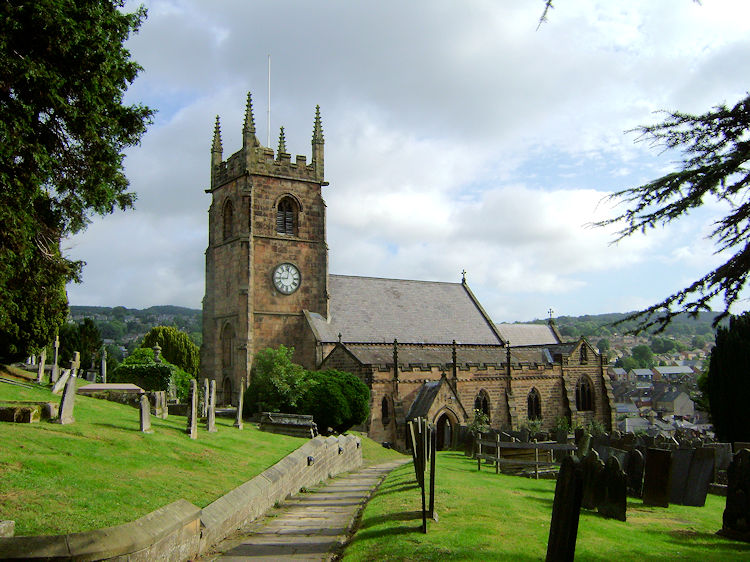 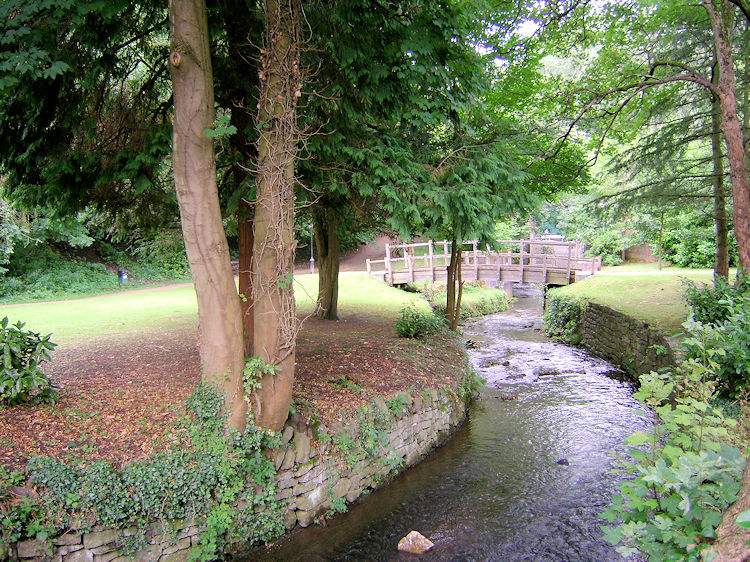 After the excitement of High Tor I reached a junction of paths with the way left pointing to Pic Tor and the way to the right leading down to Old Matlock. I took the right fork and emerged by road near to St Giles Church. I walked around the grounds of the church and reached a pleasant small park with two lovely small bridges, one of which I crossed to follow a path which skirted the north side of Pic Tor and emerged alongside the River Derwent. 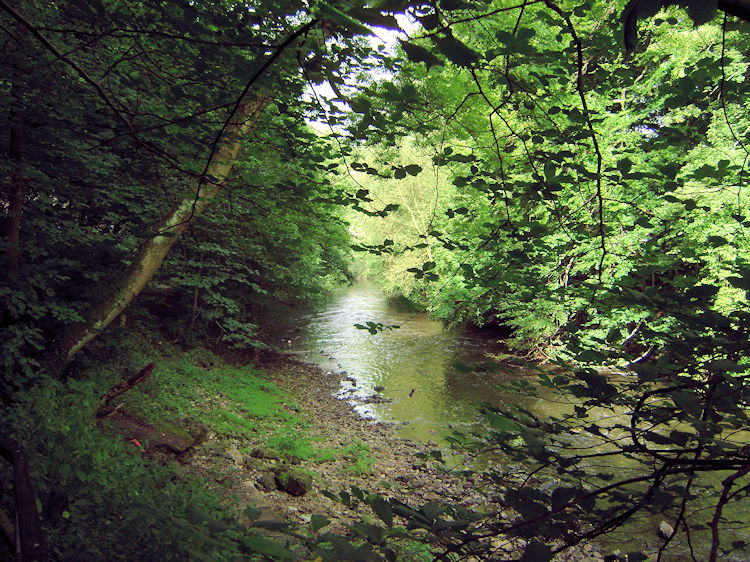 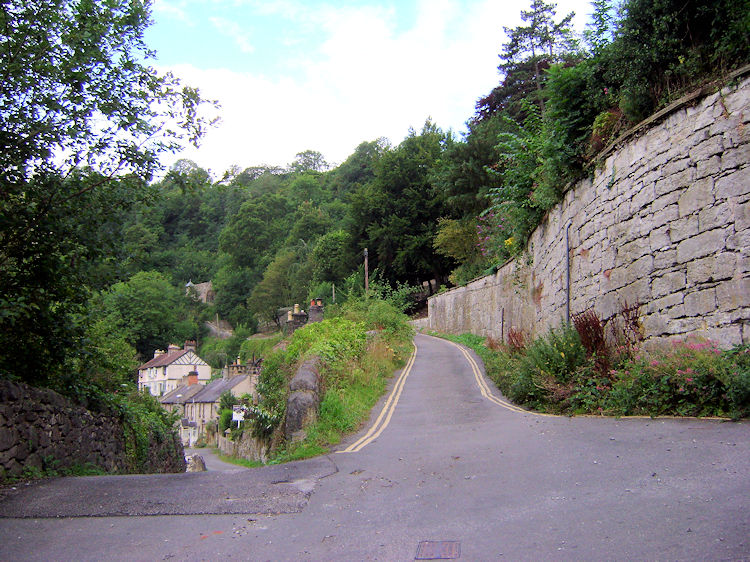 The climb to Shining Cliff begins

I followed the path by the riverside which continued around the north side and then the west side of Pic Tor and on its way taking my through a railway tunnel and then to a bridge which I crossed to reach the west bank of the river. From there I continued along the path for a few yards and then crossed the A6 to follow a road up towards Shining Cliff. What looked like a small chapel high to the right of the roadside took my eyesight as I climbed up the road. When I reached it I noticed it was now converted to a private dwelling. I continued past it to the end of the road. Here two paths were presented to me, the one on the left would have led me down to Long Tor. I took the one to the right, leading me further up the hill towards Masson Farm and Matlock Dale. 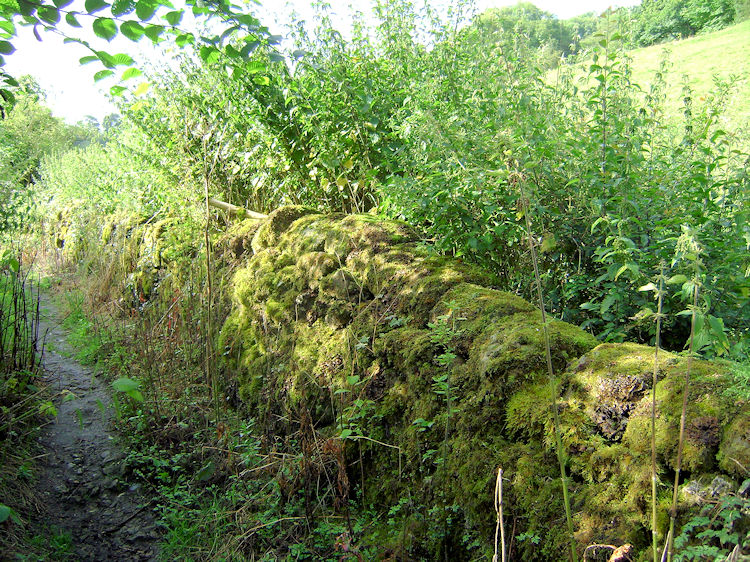 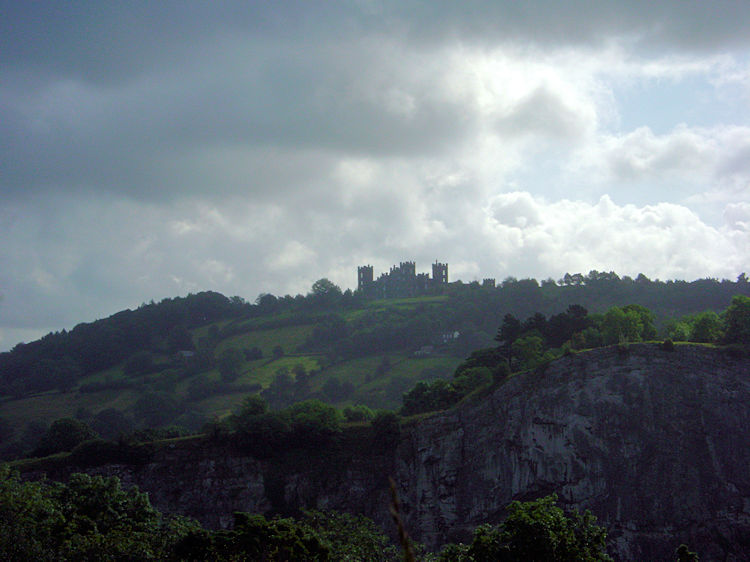 Riber Castle of the limestone cliff of High Tor

It was a decent climb through more woodland and along tracks to Matlock Dale. It was getting towards mid-morning too and the sun was blazing down on an increasingly hot day. Suffice to say I had a good sweat on during the climb, particularly in the enclosed sections of the walk where the little breeze that existed was blocked from reaching me. I took regular pauses during the ascent to take in the views. One striking view was across to Riber Castle in the east, set upon a hilltop with the limestone cliffs of High Tor directly in front of the castle. I enjoyed that one, as I did of the views up to Matlock Dale. 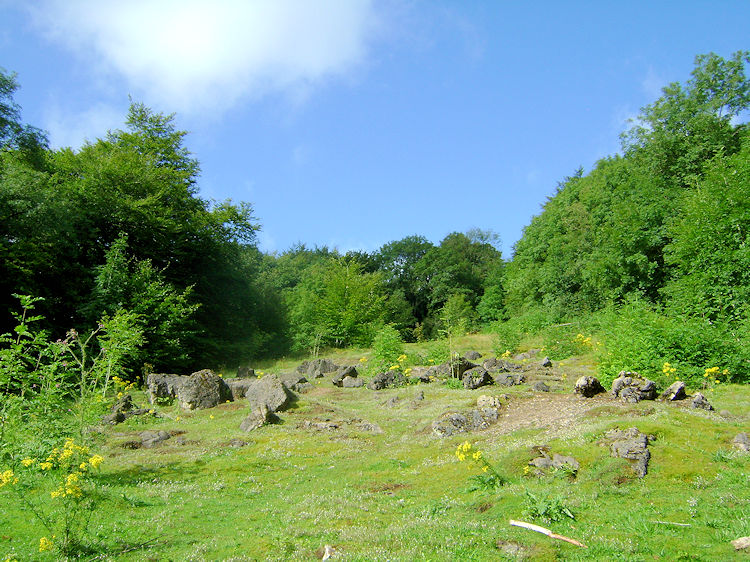 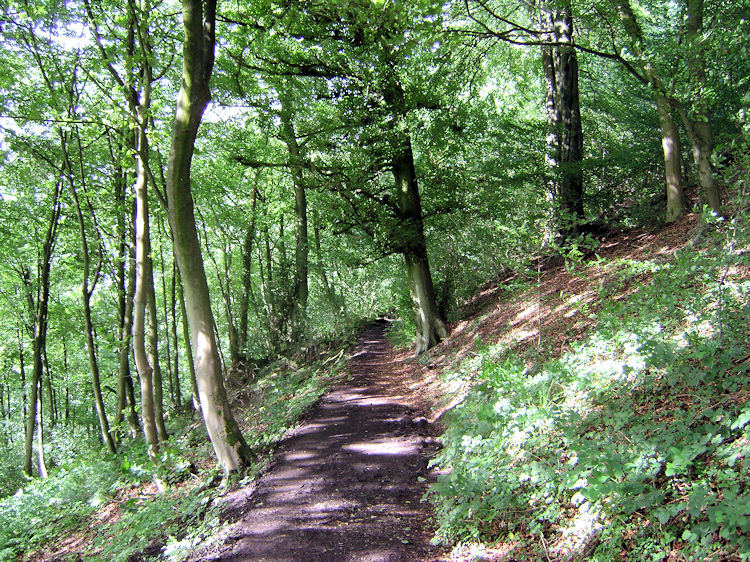 Woodland near the Heights of Abraham

One compensation of the wet summer of 2012 is that green and pleasant England seems to be a better and lusher green than usual. The trees were at their best and great to be amidst. They were also helpful in shading out the sun which was now hotter still in a brilliant blue sky. Matlock Dale was part open land and part sheltered woodland. In the dale I also came across the high entrance to the cable car park of the Heights of Abraham. For some there is an easier way up to this pleasure spot but not for me. I continued on through the woodland and on occasion saw limestone outcrops close to the path. It would be easy to twist an ankle or fall and suffer an even worse injury if venturing from the path in this part of the wood so I stuck to the path before coming out into the open near Ember Farm. 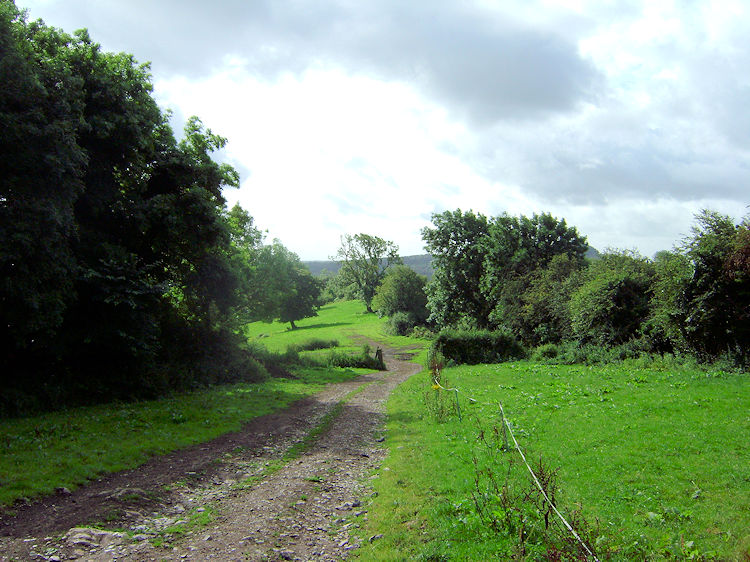 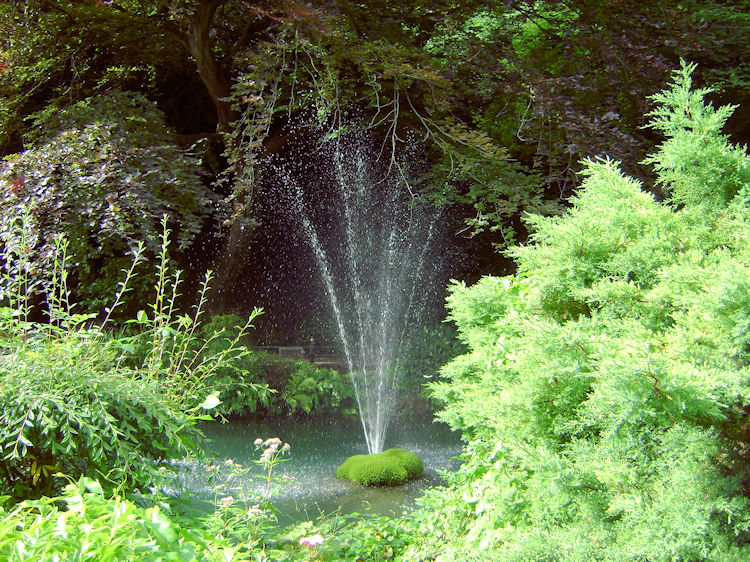 From near Ember Farm I walked slowly down through meadow towards Upperwood while enjoying more sublime views to the east. After the meadow section I came to paths galore and the stretch from here to the A6 was a challenge to follow. Many of the paths were overgrown and surrounded by stinging nettles, one bunch giving me a brush on the arm. Using my GPS was certainly useful on this part of the walk deep in the undergrowth but I managed to emerge from the difficulty at more point of choice and near to Holy Trinity Church from where I continued north by the roadside until I crossed and entered the grounds of Matlock Bath Riverside Park. 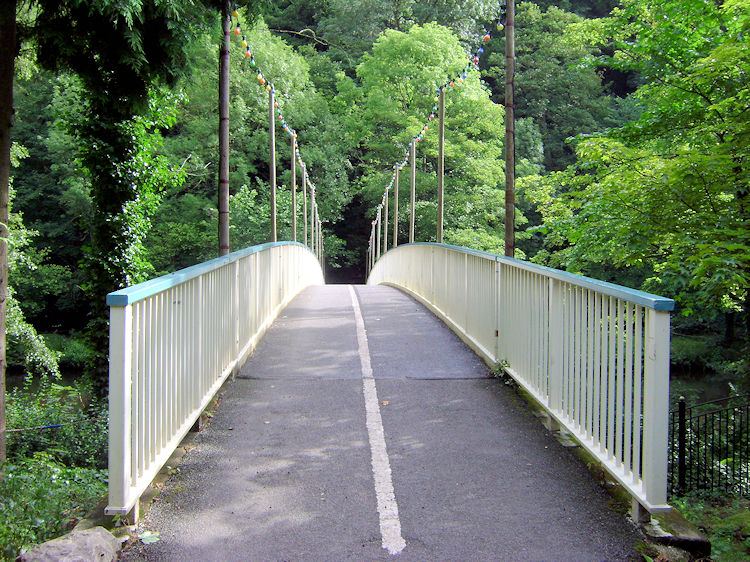 The bridge crossing the River Derwent 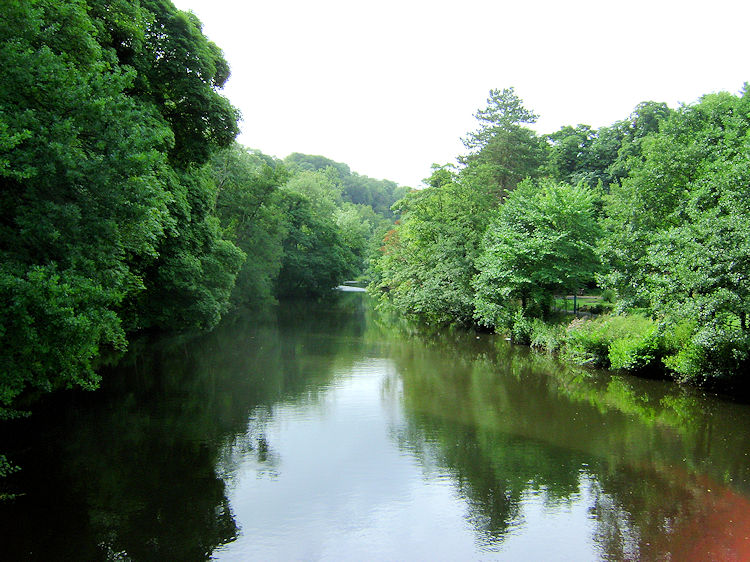 Matlock Bath Riverside Park is delightful, as is much of Matlock Bath which is far less developed than Matlock Town and therefore much more in keeping with its natural surroundings. I ambled through the park and took time out to have a conversation with two park keepers who were enjoying their tasks for the day which included grass cutting and general park husbandry. After the brief chat I continued through the park and crossed a bridge to the east bank of the River Derwent. 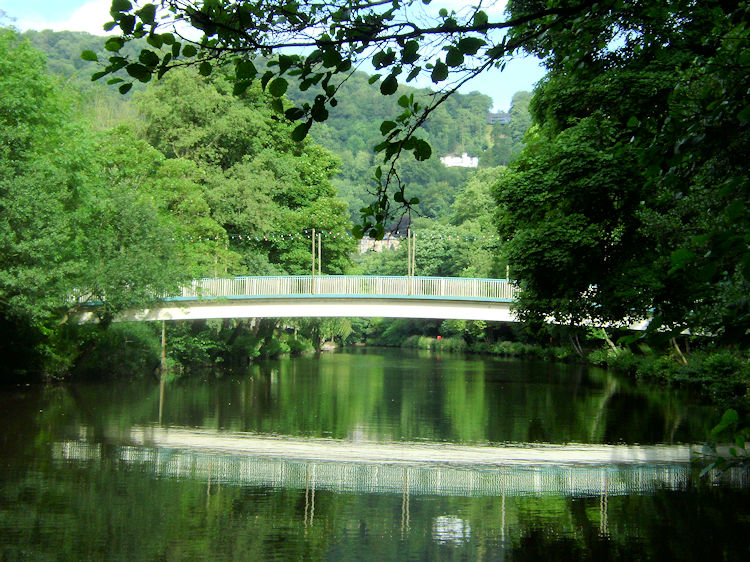 Bridge and reflection in the Derwent 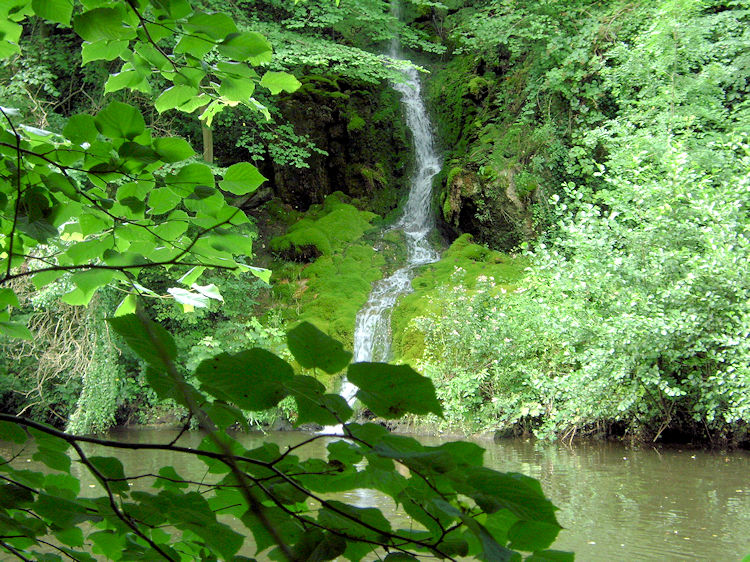 A path led me south along the Derwent for about 100 metres from where I caught a view a a small cascade waterfall on the west bank of the river. Not being able to get any closer because of a locked estate gate I followed a path ascending north east which cut through the gorge and at times I walked by the side of small limestone cliffs and all in the midst of yet more lovely deciduous woodland. The ascent continued for about 300 metres before I emerged into light again. 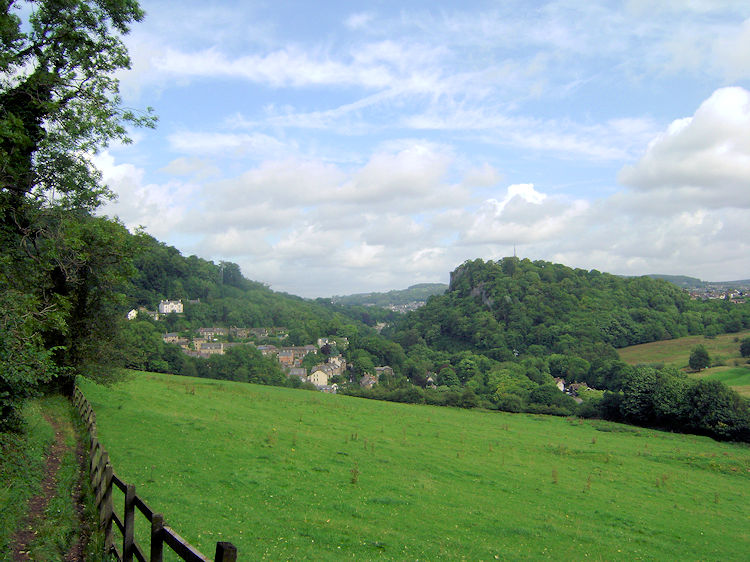 High Tor as seen from the south 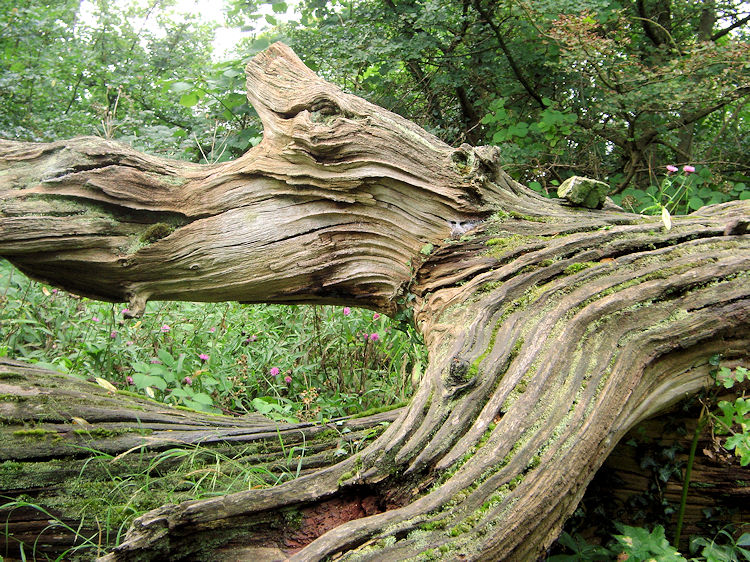 As soon as I levelled off by the side of the wood I had just walked though I could see Starkholmes and the point where I had started from. I could also see the southern aspect of High Tor where I had enjoyed the most exhilarating of starts to the walk. I ambled along knowing I was close to the end of a remarkable adventure and thrilled at all that I had enjoyed in the morning walk of Matlock Bath and its tremendous natural surroundings. Blooming heck, it was good.