Summary: This is a wonderful walk that begins with an immediate high, the awesome sight of the Grey Mare's Waterfall which captures attention as soon as the walk begins. There are delights to follow; more cascades, a serene loch and thrilling hills around its perimeter, some of which I visited on my walk around the water before descending the same way I came. 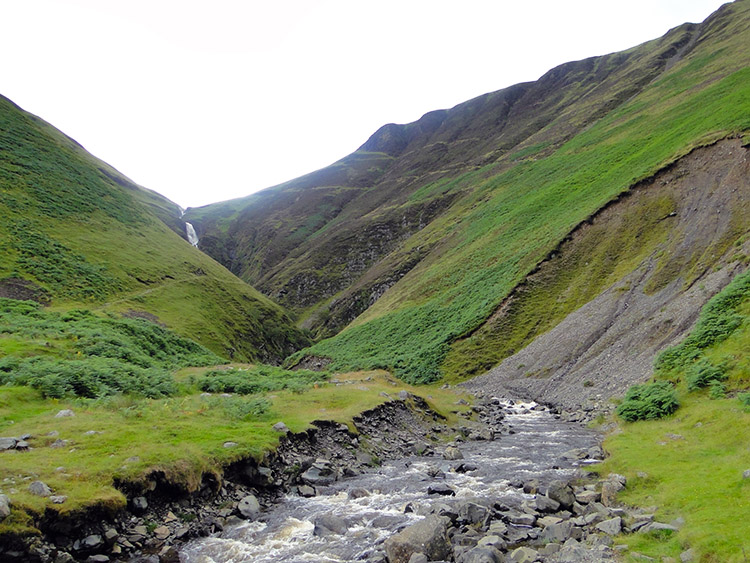 The approach track from Tailburn Bridge 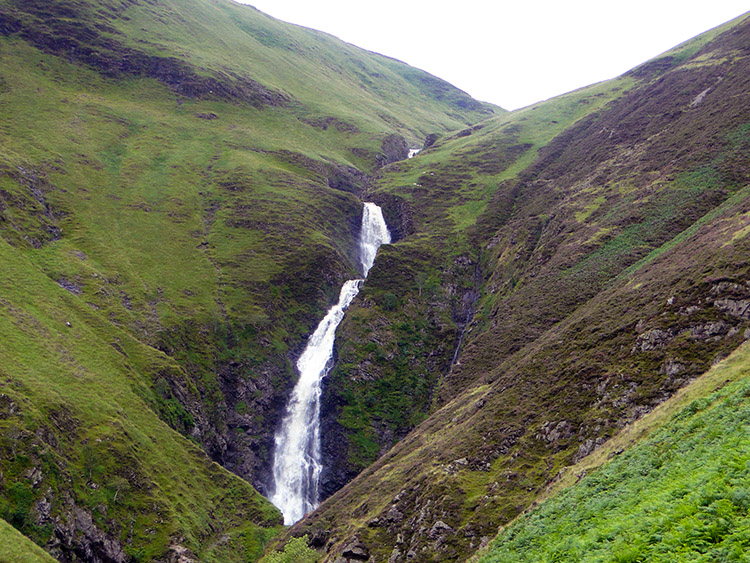 This walk was the first of three short hikes on our Scotland Holiday 2009 and whilst Lil prefers 'sunshine, vegetating, feet up and a good book' themed holidays she does appreciate a good walk with outstanding features. For sure this walk delivered as Grey Mare's Tail was an outstanding waterfall to experience and one of the most outstanding in my walking adventures. The added benefit is that the waterfall is not too far from the A708 road so those who cannot walk far can enjoy the main fall without too much effort. For us though the full impact of the Grey Mare's Tail and its upstream siblings were sought and that meant climbing up and beyond the main fall to Loch Skeen, the waterfall's parent water. We set off from the roadside car park and past the hut housing the National Trust for Scotland guide who told us about the walk and what to look out for including the resident Peregrine Falcons. Heeding his advice we set off past the hut and crossing Tail Burn via a wooden bridge which affords the first glorious views of the spectacular 200 foot cascade. From the bridge we ascended steeply and huffed and puffed up the south flank of Bran Law. 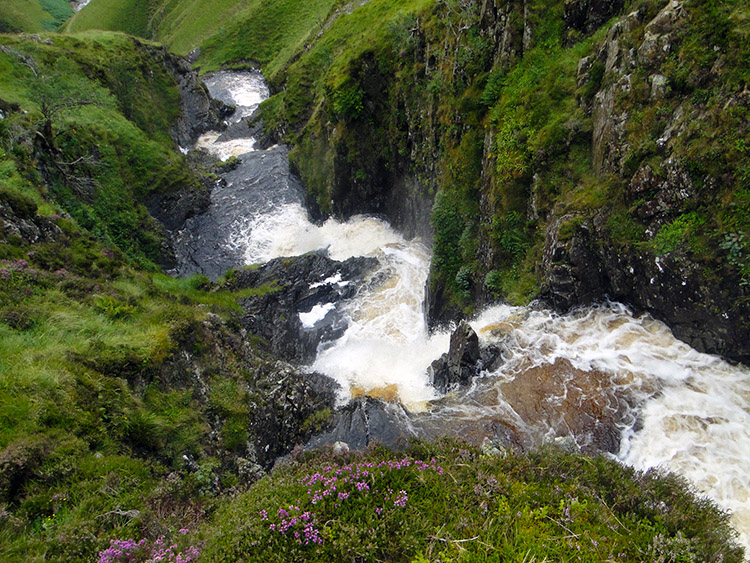 Grey Mare's Tail seen from above 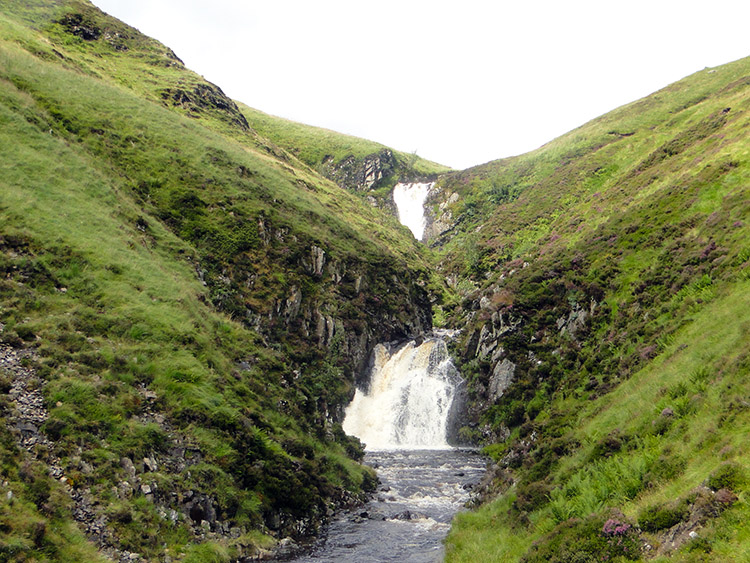 After the exciting of seeing the Grey Mare and the exhaustion of climbing to her head I cautiously trudged down from the path to see her cascade point up close but not too close for safety and Lil's apprehensions. The noise created was fervent and after eyeing up the point of fall I turned to witness another spectacle upstream. in view were two smaller cascades almost twinned in size and appearance. It was a lovely moment and one I felt reluctant to end. After too short a time I returned to Lil to follow the path and Tail Burn upstream to Loch Skeen. On the journey we saw lots more falls from the Burn until we reached less steep ground. From this point the path meandered for half a mile until we reached the southern bank of Loch Skeen. We took a break on our arrival. Just as we arrived a rain cloud descended over us and deposited its contents all around. We huddled near a rock crevice and carried on. 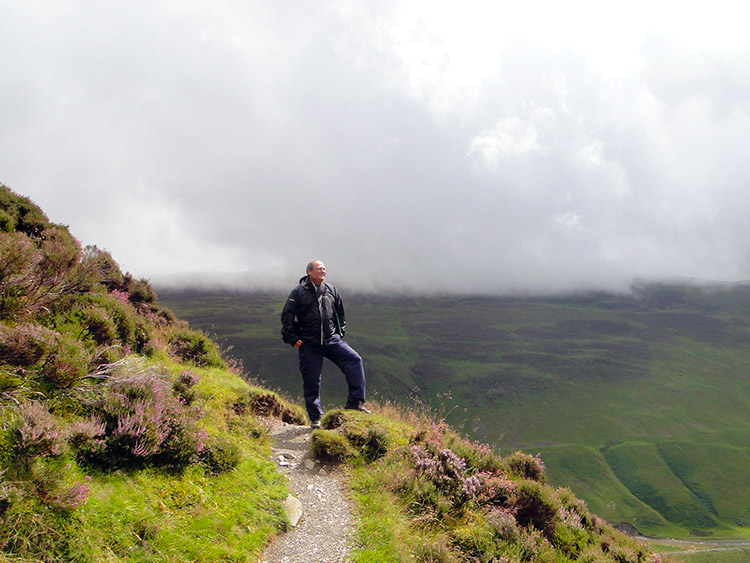 Feeling elated on the high ground near Loch Skeen 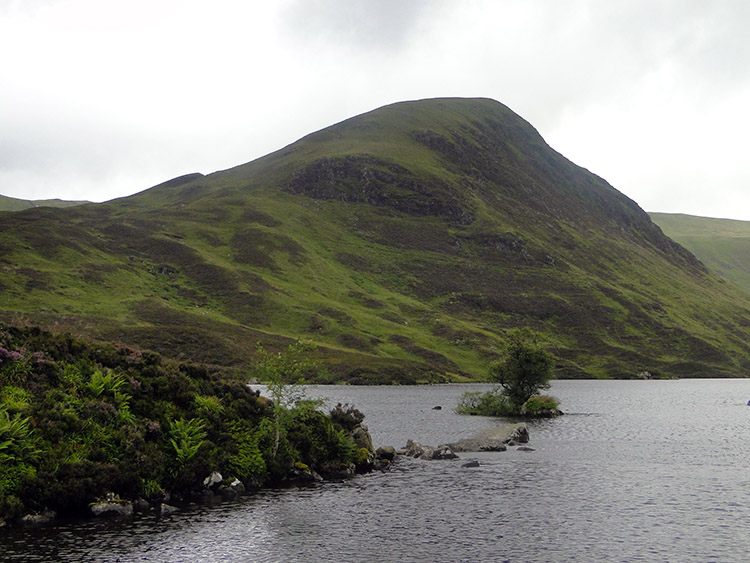 After our refreshment stop Lil stayed to rest by the loch side and take in the views. I continued on my mission to round the Lock Skeen but not by White Coomb which was my original intention. The changeable weather and Lil's advice to make my walk shorter won out so I headed for the lesser peak on Mid Craig which shields Loch Skeens western side. Mid Craig is an impressive shape with a steady climb to its northernmost top. The walking was easy and firm with no problem in navigation for the way ahead was clear and two walkers were leading me about 400 metres in front. From the top of Mid Craig there was the slightest decline down to wetter ground then a short ascent to Lochcraig Head which I scaled before descending steeply in a south east direction to the east bank of the loch. After the steep descent which was a tricky 300 metres down the loch side walking was boggy and the path was often lost, not too much used obviously. It was easy working the route though, just stay close to the loch and walk south which I did all the way until found Lil exactly where I had left her. "Hello, fancy meeting you here" she said with a smile. 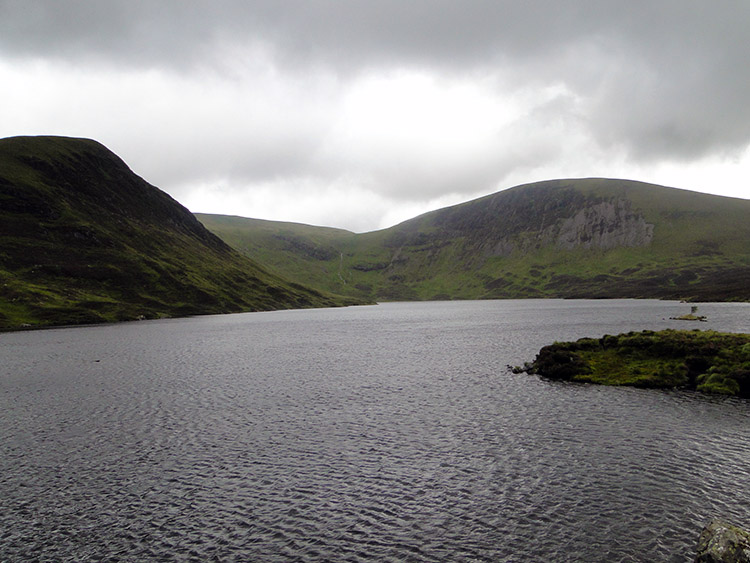 Loch Skeen with Lochcraig Head in the distance 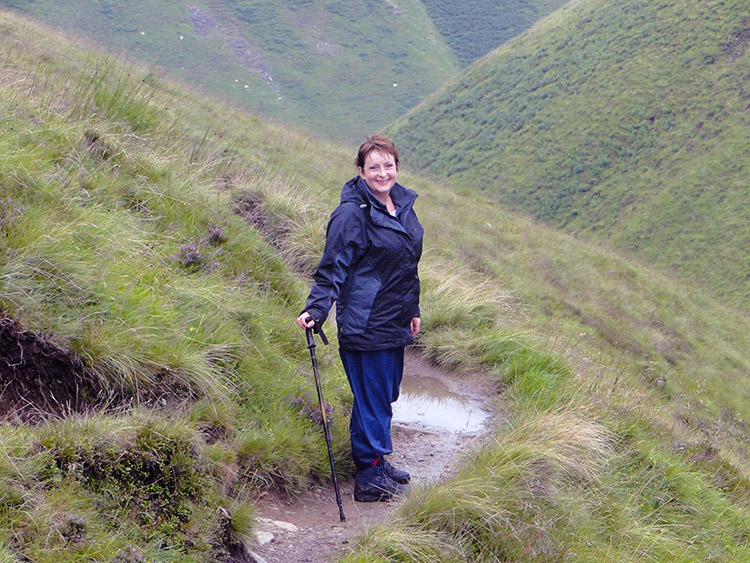 After the fun of the walk together to Loch Skeen and then of my solo tour of the loch perimeter Lil and I enjoyed an easy walk back descending gently at first and then steeply when back at Grey Mare's Tail. On the last 100 metres of the descent we met a couple walking up who pointed us in the direction of the waterfall. We looked but it was gone..the Peregrine that is. "It was just hovering over the tops of the Grey Mare" the man said. It did not return while we waited. That was to prove the only disappointment of the walk. The waterfall remained as it always does for all to see it's majestic spectacular. The bird had flown.