Summary: This walk is linear so transport will need to be organised before starting. I was with friends and we were staying in Llanberis so one of us drove to team to Pen-y-Pass for the start and one of us drove the morning driver back to Pen-y-Pass later in the day after we had finished the walk. As for the walk itself we took the miner's Path from Pen-y-Pass to the summit of Snowdon and then descended from the mountain by way of the Llanberis path. The going was good throughout, the Miner's Path being an access road leading to the base of the mountain which was followed by a steep climb on paths to the summit. The amble down the Llanberis Path beside the mountain railway was good as we enjoyed stunning views. 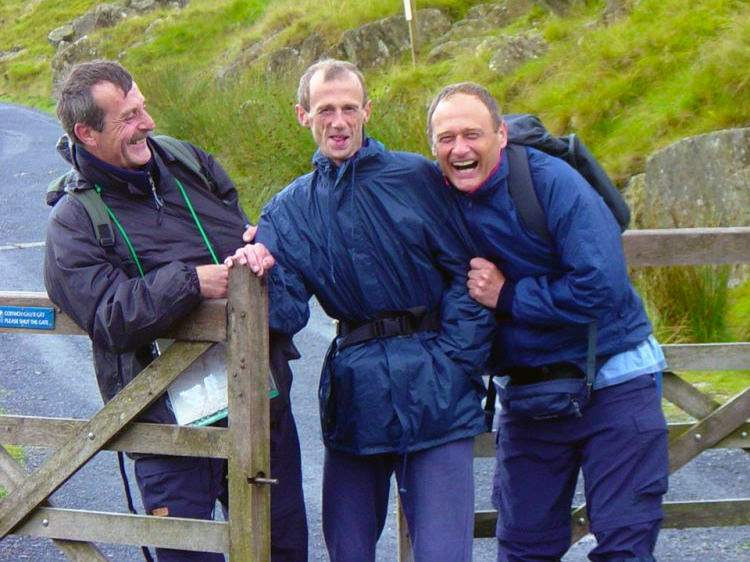 We were so excited, it had promised to stop raining! 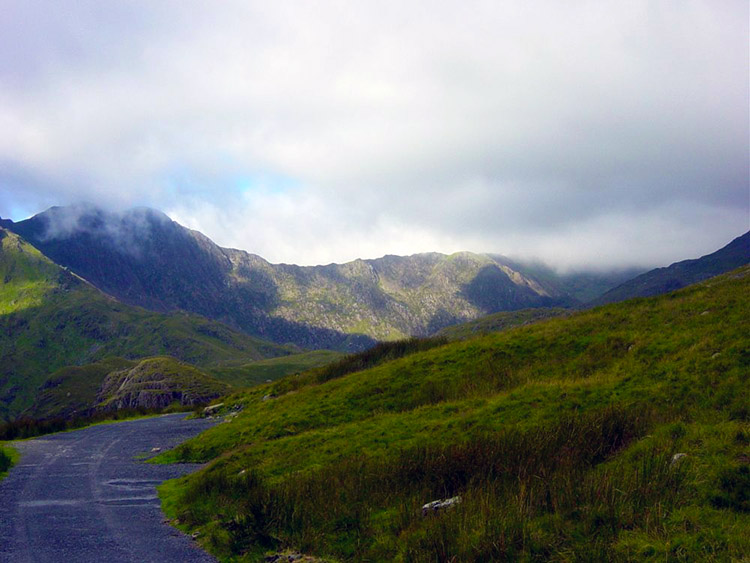 Onward to Snowdon in clearing skies

After four rainy days in Snowdonia this was our last chance to reach the top of Snowdon. To our relief we woke up to a dry morning. It was not exactly sunny as we had breakfast but the cloud was rising and breaks were appearing in the cloud as we drove up to our starting point at Pen-y-pass. Hopes were high as we set off in bright conditions following the Miner's Track, one of the easier routes to the summit but our choice as we still had the gruelling Cornish Coastal Path with backpacks to come. As we walked past Llyn Teyrn and towards the reservoir that is Llyn Llydaw the sky was becoming very blue, apart from one piece that is, the section on the summit of Snowdon. 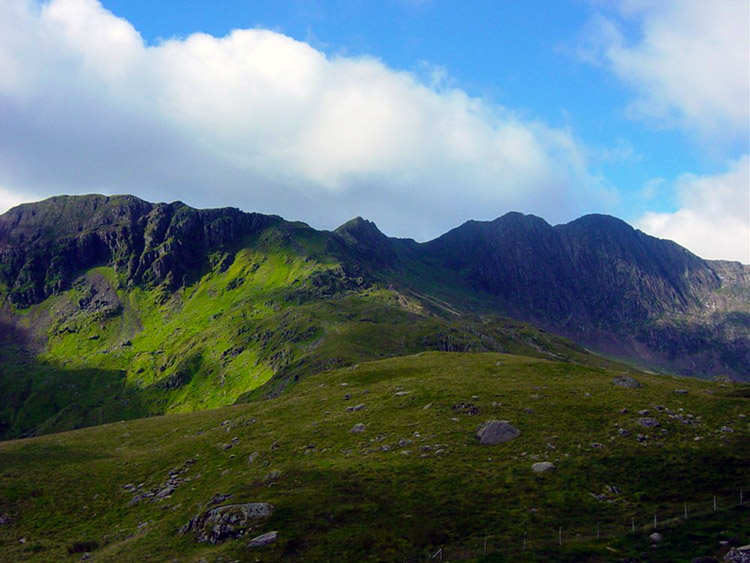 The view to Snowdon from the Miner's Track 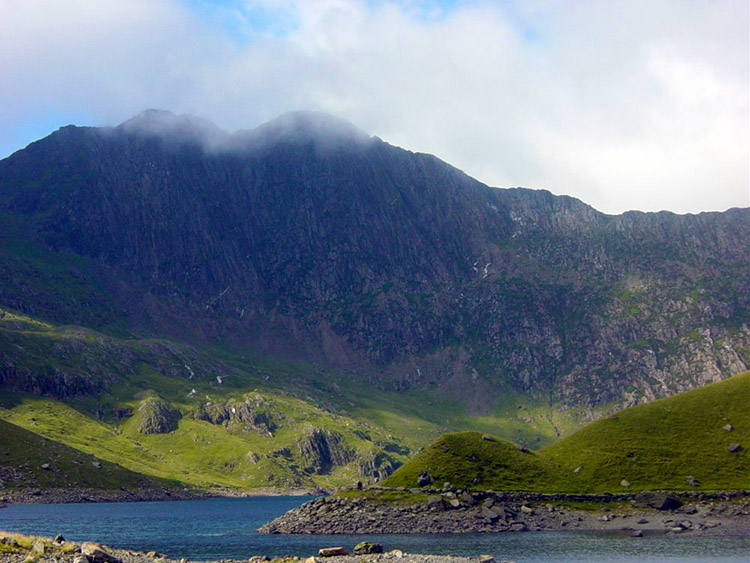 Snowdon as seen from Llyn Llydaw

Soon we arrived at the old crushing mill of the Britannia Copper Mine. The mill was worked by a water-wheel fed from Llyn Glaslyn high above. In its day this was one of the most modern mills in the country. After passing the mill we made a steep ascent to the shores of Llyn Glaslyn. The blue-green colour of the water results from dissolved copper salts that have leached into the lake over the years. 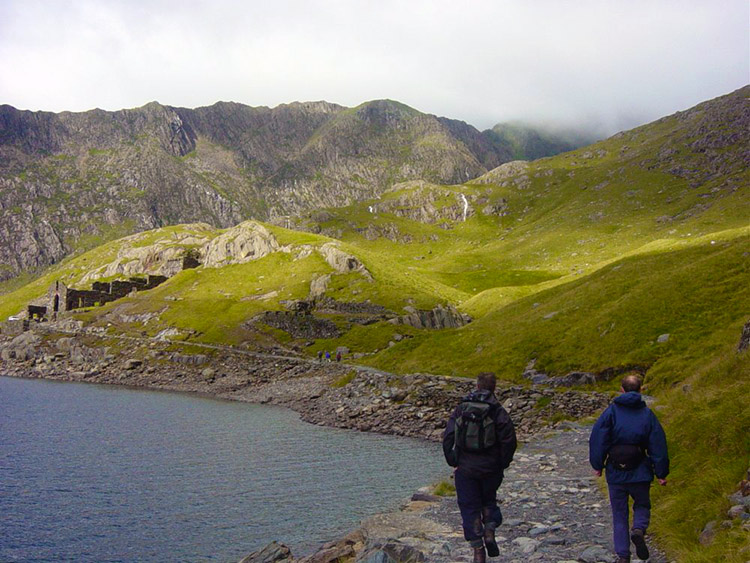 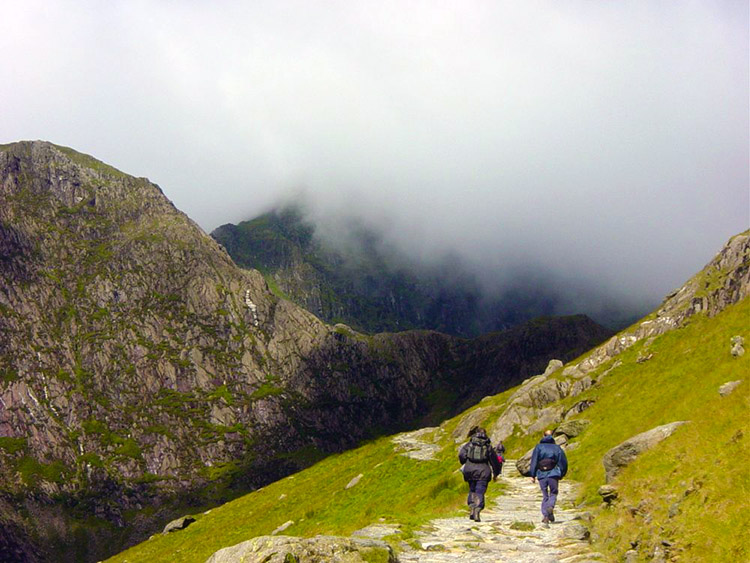 Nearby admirable National Trust volunteers were repairing footpaths on the 400 metre ascent over scree that we now had to make to reach the Pyg Track on a plateau above. Those guys do a great job and what a hell of a walk they have to and from work each day. At least they were blessed with the same views we had. And the views were very clear, even at 900 metres which is about the height where the Miner's and Pyg tracks rejoin. Alas we could see cloud rolling over the top from a westerly direction directly above us. 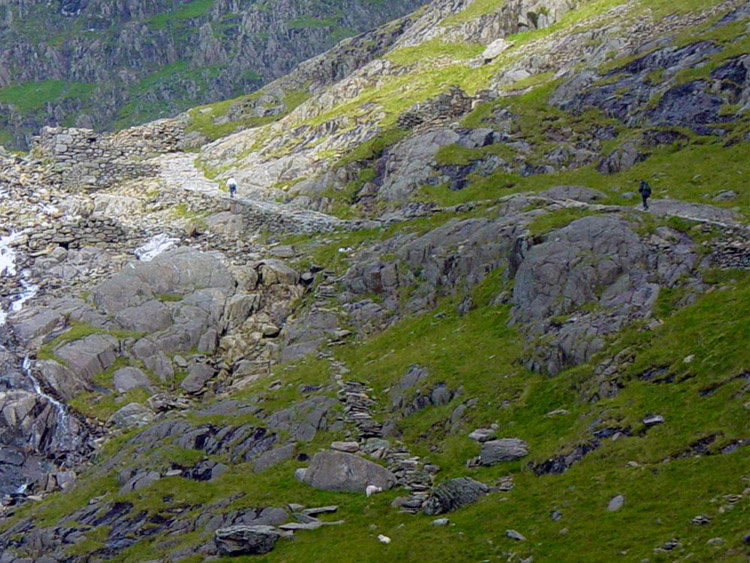 Climbing the steepest part of the Miner's Track 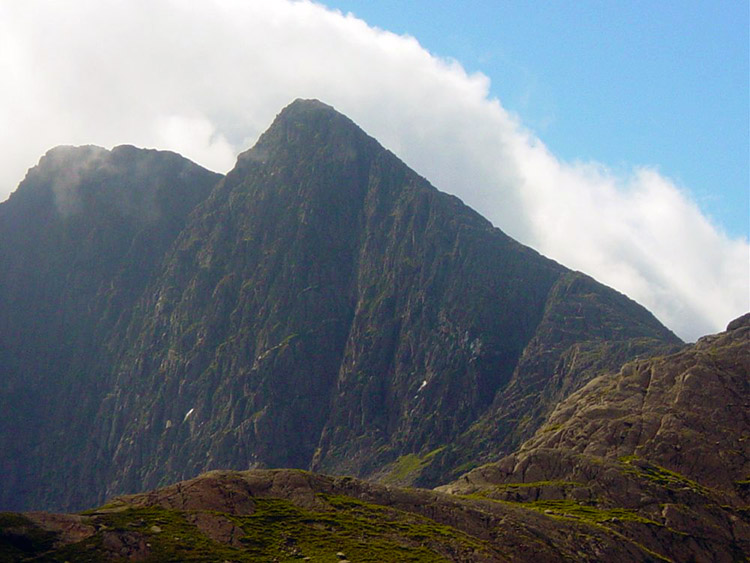 The cloud relentlessly hung around awaiting our arrival on the ridge that leads to the summit of Snowdon. One minute, a few steps from the ridge we were in sunshine and a few steps later in over the ridge and in cloud and the exposure of the western side of Snowdon. The temperature had dipped from around 18 degrees to freezing in the space of a few yards. It was a good job we had prepared for such eventualities and quickly put on our light raincoats which provided us with the necessary warmth to endure the sudden change. The rapid change in temperature had exposed us to real mountain climbing conditions. 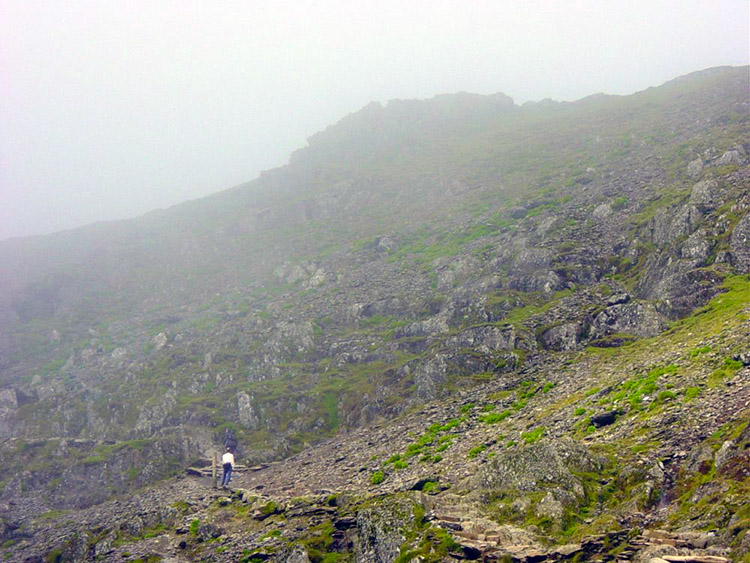 Nearing the summit of Snowdon and now in cloud 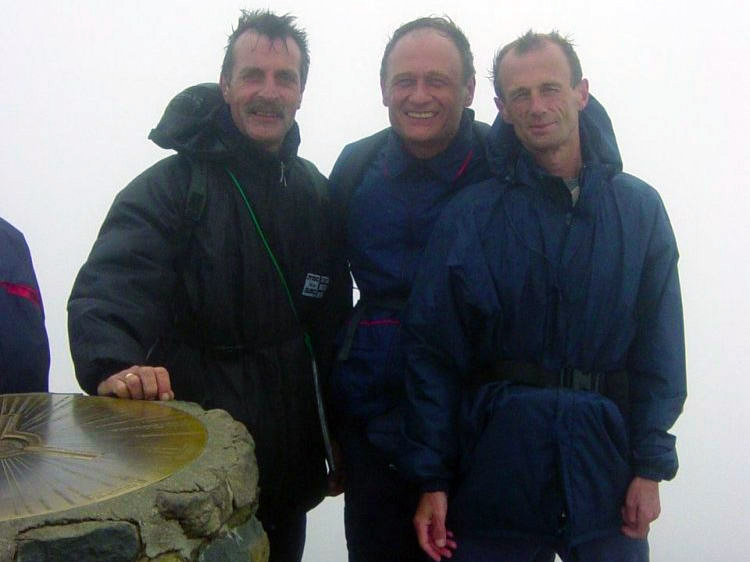 At the summit of Snowdon without a view

A train on the Snowdon Railway tootled by within a few feet of us. We did not see it in the cloud. After a hurried scamper along the ridge and to the summit we called in the summit cafe for a drink and then left to begin our descent down. We decided to walk to Llanberis and after dropping a few feet off the summit we were out of cloud and in glorious sunshine again. It was amazing, an absolutely beautiful day. 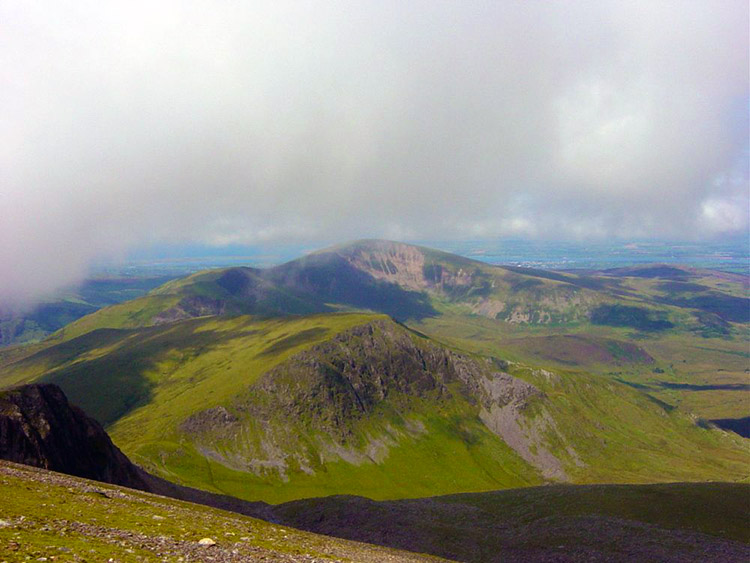 Cloud dispersed and views appeared on the descent 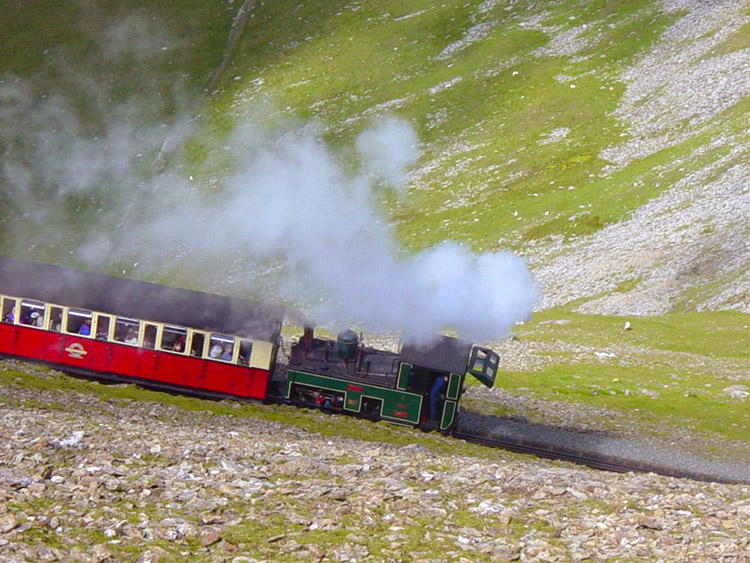 We did not take the train

We descended along the long Llanberis Path watching the trains stopping at the stations between Llanberis and the summit. As we got lower we met people walking towards the top, a few of the first we met being sensibly dressed but as we descended further there were more and more people, some aged, some young and some family groups who made us wonder about their senses. Some were dressed for the seaside and some were in the most ridiculous footwear, some in flip=flops and even a group of ladies attired in high heels!. But then it was sunny and warm, a perfect day out. Our guess was many would fail to get even half way and would need to invest in a train ticket to get down the mountain at some point. And well before the top. 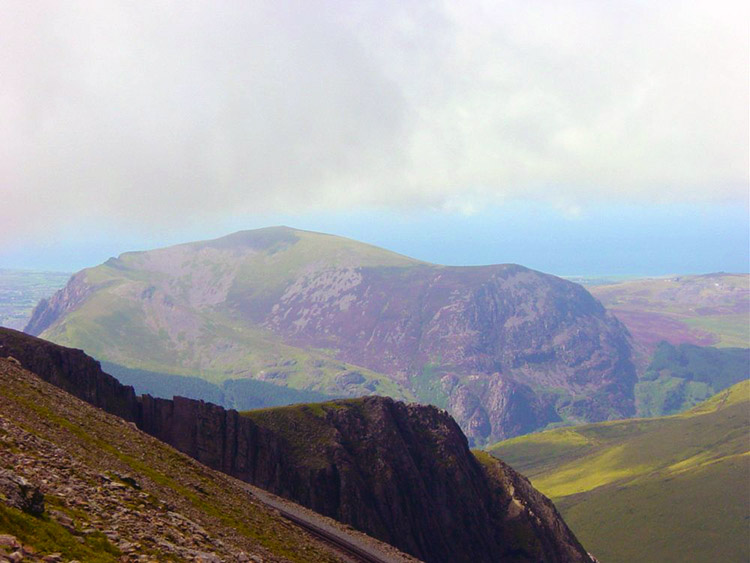 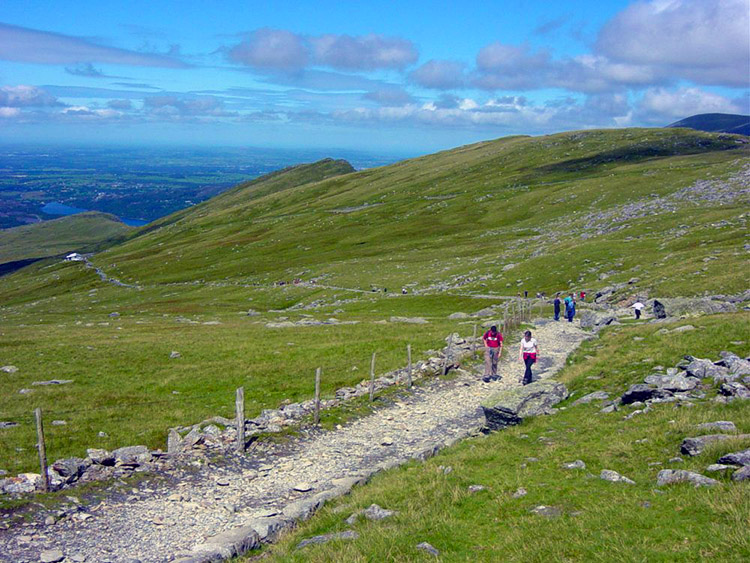 Some were even in high heels on the Llanberis path

We continued to loose height whilst enjoying the most spectacular views of the Welsh Coast, Anglesey, Caernarfon and the rest of Snowdonia. The views down to Llanberis and Llyn Peris were stunning too. We took a break on the grassy banks to take it all in. It was fantastic weather now, a real delightful end to our walking holiday in Snowdonia. The weather had let us down a little and particularly clouded our summit experience but it was certainly making up for it now. 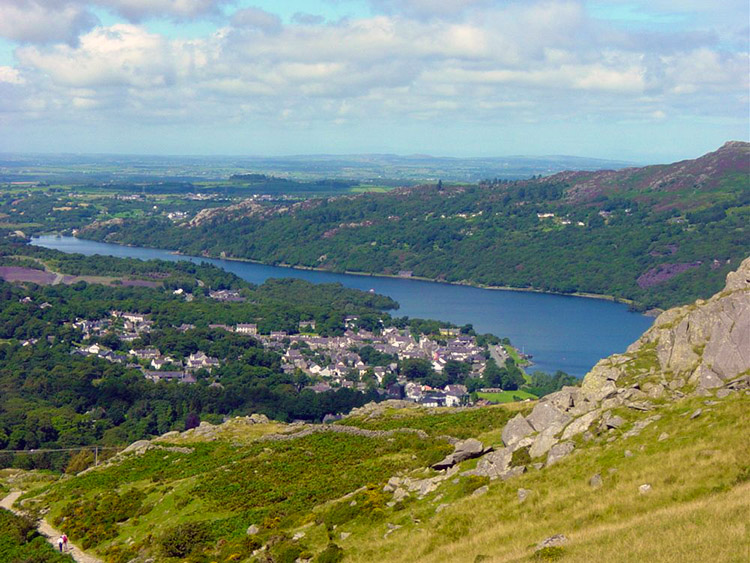 Llanberis from Derlwyn near Hebron Station 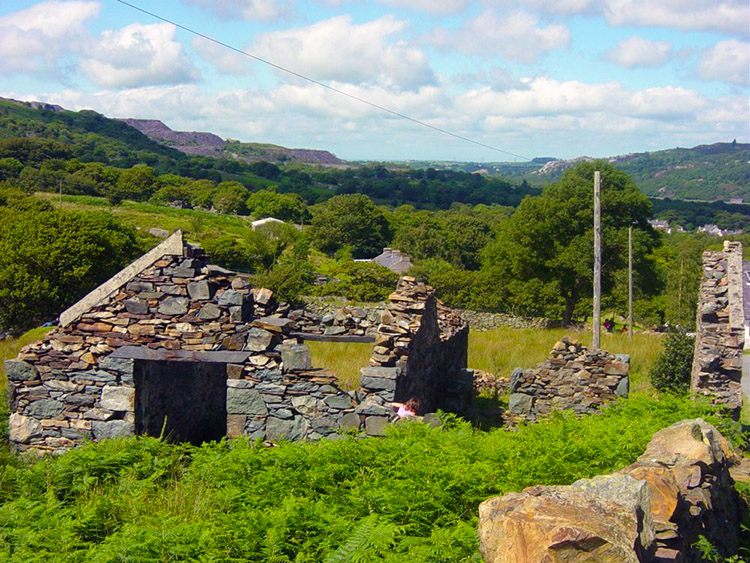 Disused building on the outskirts of Llanberis

We reached Llanberis and walked through the village back to the hotel. Job done. Steve and I went back up to Pen-y-pass to I recover my car. Now we looked ahead to a night of celebration. We had no walking the next day as we were driving down to Cornwall to begin the Cornish Coastal Path the day after. So we celebrated and our host at the Gallt -Y -Glyn treated us to a juggling show. Goodbye Snowdonia and thank you.