Summary: An easy walk I held in reserve for a rainy day when in the Brecon Beacons. A lovely part riverside, part canal towpath walk which can be enjoyed by all, whatever the weather. Perfect for families with young children and for mature walkers too.

The Walk: I had planned five walks for a five day walking break in the Brecon Beacons and then a sixth shorter half day walk as a reserve should one day be inclement. This walk was the reserve, an easy gentle ramble along the River Usk from Brecon and the along the towpath of the Monmouthshire and Brecon Canal back to the town. As I had also promised to meet up with my Stepson, wife and granddaughter Molly for Sunday dinner in Crickhowell this walk, at just a little over four miles, was a perfect solution. 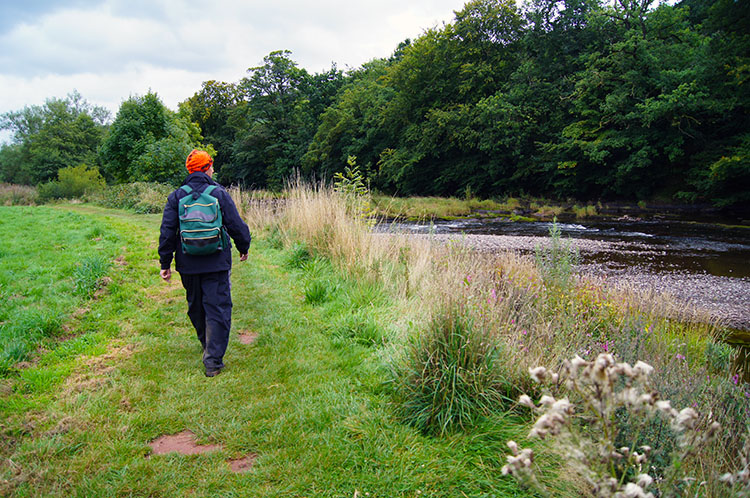 Following the River Usk from Brecon 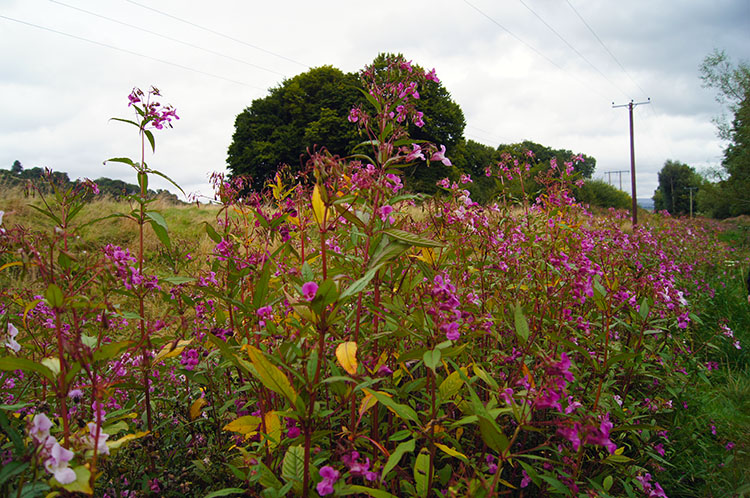 Brilliant pink beside the Usk near Brecon

To make the walk a circular Dave, Steve and I walked from our accommodation at the Grange guest house to the canal basin and then began the true walk from the point at which the canal ends or starts (ones point of view?) through the town to the road bridge over the River Usk. Then we followed the river downstream east. After leaving the riverside to walk around a couple of streets we were soon back beside the river. Other walkers, some with dogs, were taking short walks in the countryside beyond the town and they did the usual meet and greet when we passed them. One walker though, a lady by herself made a point of running away from us when we approached. She was mature but her age did not stop her making a determined effort to flee from us as fast as she could. She ran across one field without stopping. We all thought her actions rather weird. Not thinking about her anymore after she was out of sight we continued our amble. 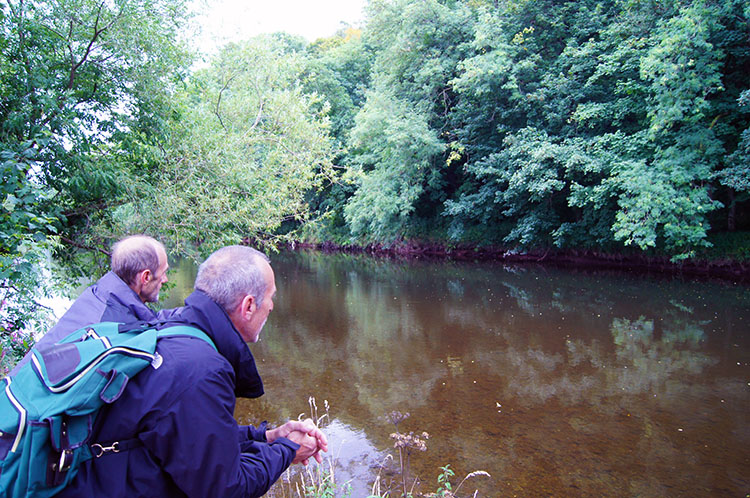 On the lookout for Trout 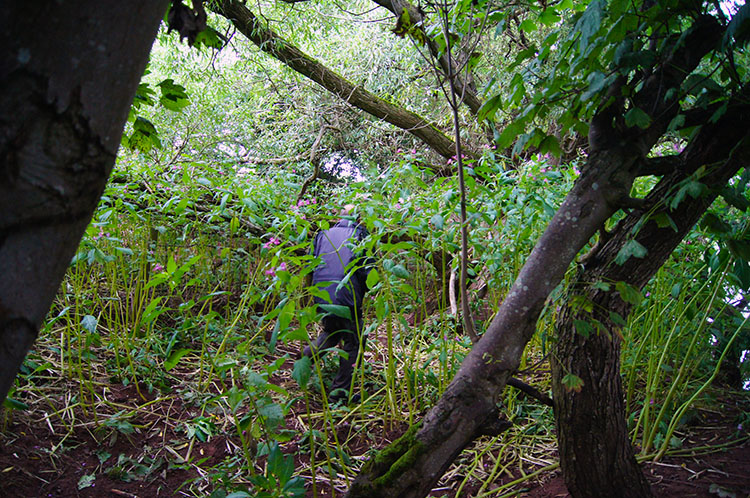 Through a copse beside the River Usk

The rain we had been promised had not yet arrived as we continued our walk along the River Usk from the outskirts of Brecon. Not just the rain to worry about later, high winds to storm force too was the threat from the Met. The river slowed to a crawl at some wide points and virtually still at other wide places allowed Steve to indulge in one of his favourite pastimes, that of spotting Trout. Dave indulged him in sharing a few minutes peering into the river. I too looked and we were often rewarded by sights of Trout including fleeting ones of leaps from the water to catch flies.

Then it happened again, one of the rare eureka moments for my walking friends which seems to elude me. "There! can you see the Kingfisher" Steve remarked. No I had not. "There, its just flown to that other bank" he added "Where?" I asked. "Oh, it has gone now. did not you see it?". "No" I replied disappointingly. Despite my continued failure to see a Kingfisher in the wild I did see a magnificent sight of birds at this point of the walk though. Dave, Steve and I were all witness to a superb performance of aerobatics by a large flock of Swifts. They swooped, banked, levelled, gained height, veered, turned sharply and thoroughly entertained.

The entertainment of the birds, a good path followed, bar a small skirmish in a copse regaining the path when we missed a gate and general conversation made our walk along the river pass ever so quickly. Before we knew it we were leaving the riverside by following the path to a gate which put us on the Monmouthshire and Brecon canal. Walk halfway over. 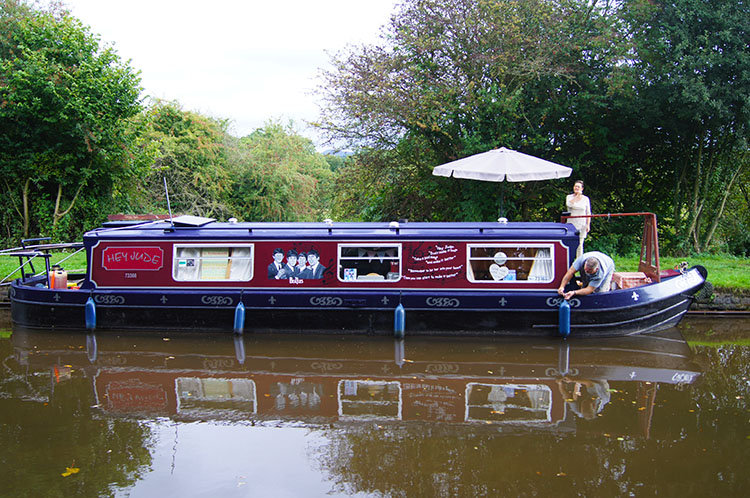 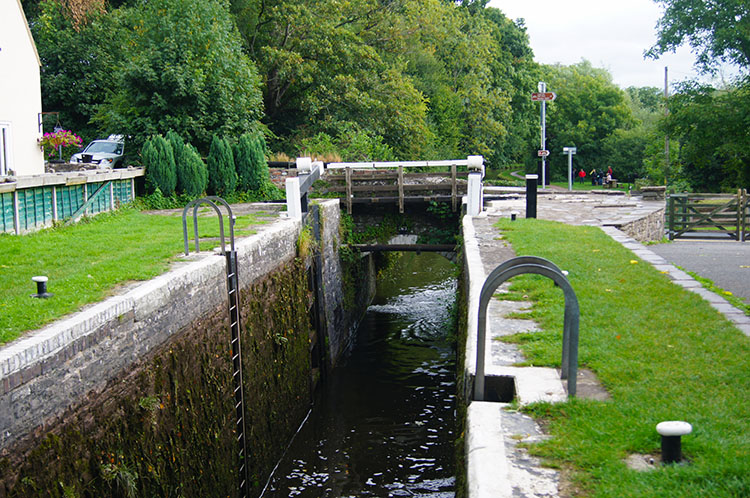 A lock on the canal near Brecon

We actually followed the canal away from Brecon and took a walk from Glanusk Lock Bridge along the B4558 and then a B road road to the village of Llanfrynach before following the B road through the village and back to the B445 which took us to a point where we rejoined the canal at Storehouse Bridge near Ty Newydd Marina. We found the road section boring and without a side path for walkers not to be worthy of adding to this walk though. So it is not included in the track files or on the map, despite it being part of the Usk Valley Walk. A poor section indeed.

So, ignoring our dreamlike phase of walking along the canal away from Brecon, please follow us through the gate from the fields to the towpath and then walk with us west back towards Brecon. It is a lovely section of canal to follow. 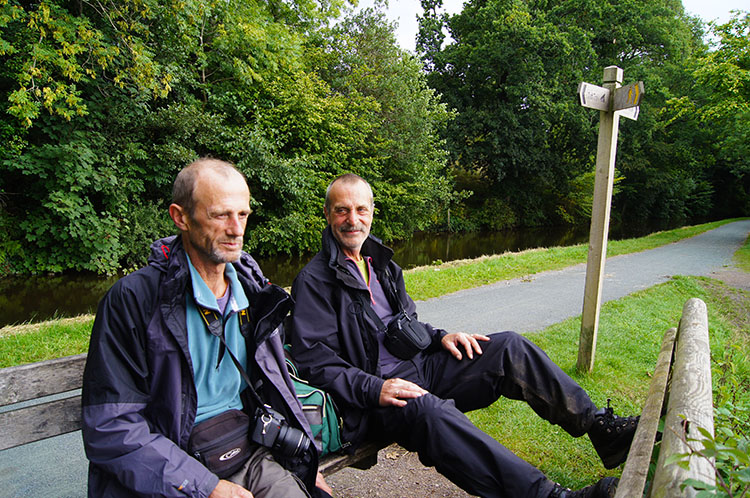 Thoughtful Dave and Steve relax by the towpath 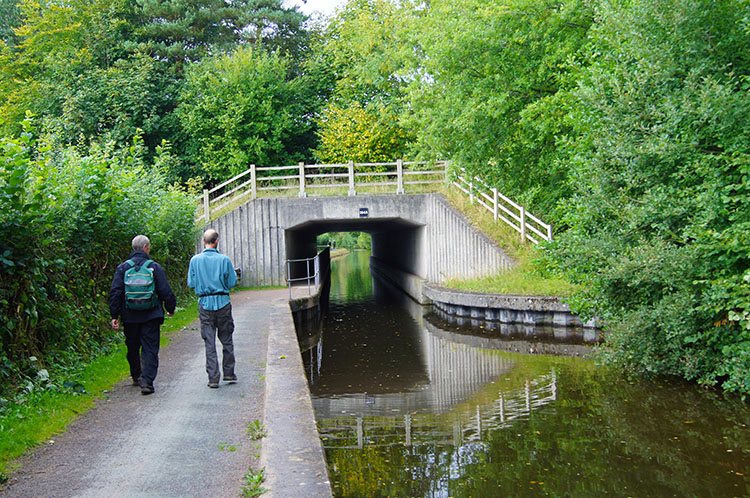 Walking along the canal back to Brecon

Do not head straight back though. We did not. As you can see in the photograph top left we took a break beside the canal to contemplate. We discussed many things, we always do during our special walks together. We certainly discussed the weather and questioned the weather forecast. Where was the rain? It was long overdue. Hoping our luck with the dry conditions would remain until we finished the walk we set off back towards Brecon. On a couple of occasions we greeted people on canal boats who were cruising on their Sunday morning. One couple, on a boat called Hey Jude unashamedly told us all about their love of the Beatles. They were a witty pair and kept a very tidy boat. People we meet on the canals usually are so friendly. 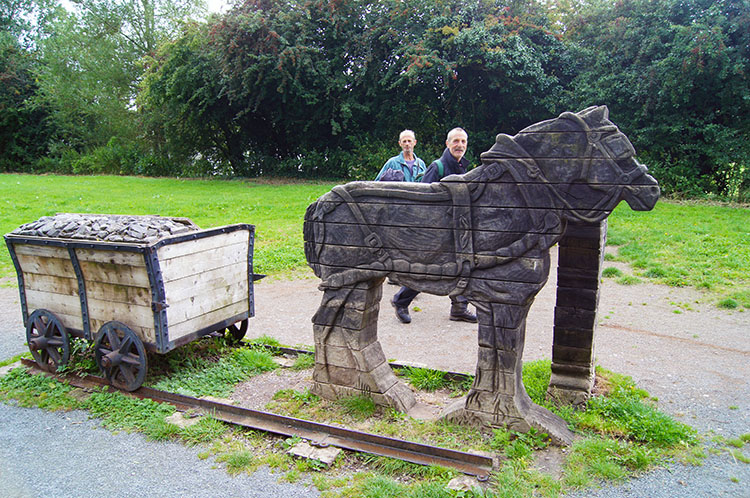 A tribute to the old ways 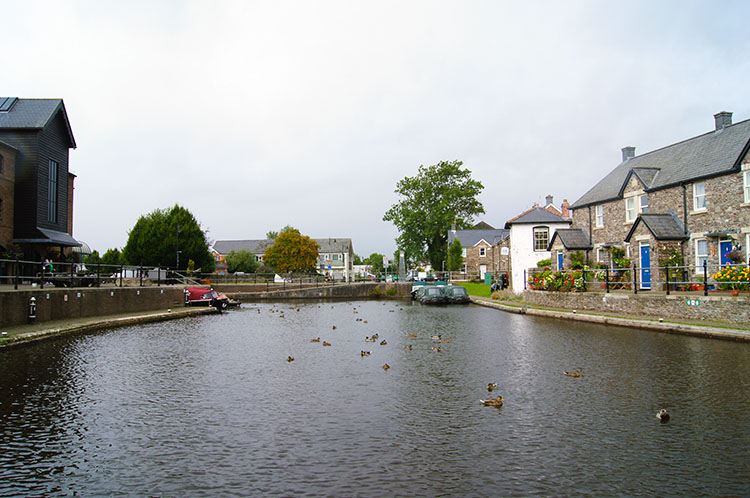 Finishing the walk at the canal basin in Brecon

Just as had seemed on the outbound River Usk stage of the walk, the two mile return journey alongside the west most end of the Monmouthshire and Brecon canal was all too brief. The final half mile was spent passing lots of people walking out of Brecon, many with charity boxes in their hands - not many weekend days go by without the sight of a charity fund-raising drive somewhere. Then, close to the canal basin where the walk would be over we passed a well made wooden man, horse and cart paying tribute to the founding mining traditions of Brecon. It is right that memorials abide to our heritage. The walk along the canal was such a memorial too, the canal, as many others in Britain fell into decay before the Canal and Rivers Trust began their sterling work. At the basin our walk was done, as said in thew summary a lovely walk, perfect for a half day in the rain. Or not in the rain as ours was! After finishing we went to see Molly for Sunday dinner. Great!