Summary: Baildon Moor proudly stands tall north of Bradford and west of Leeds. With Shipley Glen close by to the south west these two gems of the landscape simply provide the best walk in the Bradford area. Is there a more perfect solution than a day out walking them to calm the urban stress of the city? I cannot think of one. 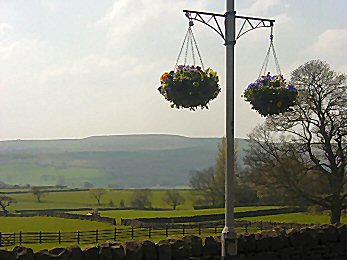 Baildon Moor as seen from Hawksworth 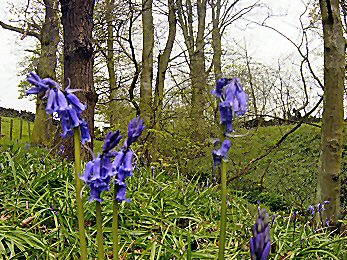 Baildon Moor is probably the most popular recreational area for the city dwellers of northern Bradford and Western Leeds. The moor, a supreme conical mound can be seen from miles around and on a clear day people standing on the moor will be able to see all of Bradford City Centre in its natural bowl below to the south. Although I prefer to walk in the countryside, well away from urban sprawl I had long wanted to explore the moor, often put off by lack of distance to cover. However, on closer inspection of the map I found I could include Baildon Moor and Shipley Glen in a decent walk if I started out from Hawksworth near Guiseley. This would make the walk almost eight miles, a fair distance indeed and so on a good spring day I finally chose to do so. Join me on my walk. 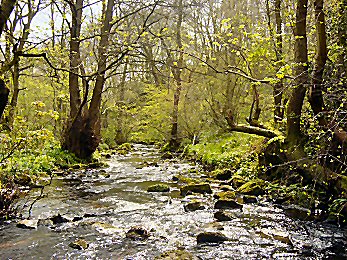 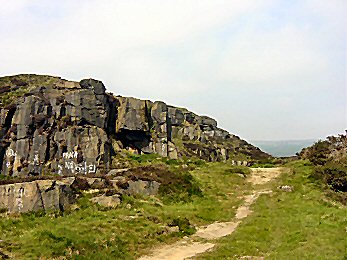 After my short drive from Horsforth in North Leeds I arrived in Hawksworth. The main road through this most well kept of suburban villages is narrow and I did not fancy parking on it. Luckily, on the western edge of the village, near to the village cemetery, there is a fork onto Odda Lane. On the lane there is a generous lay-by and so with my parking problems solved I prepared for my walk. As soon as I set off I could see my goal for Baildon Moor stands tall above any other feature in the immediate area. The moor is only 282 metres high but it is almost perfectly rounded so visible from all directions. My walk did not feature just one up and one down though for there were other delights to enjoy. The first one came soon after leaving Hawksworth by walking south downhill over a few fields and past a golf course into Gill Beck Wood. In the wood I saw my first flowering bluebells of the year. These unique British flowers are a delight to see and one of my walking highlights of the new walking season, a forerunner of summer. I really enjoyed my short walk through the delightful woodland which I took at a very leisurely amble. 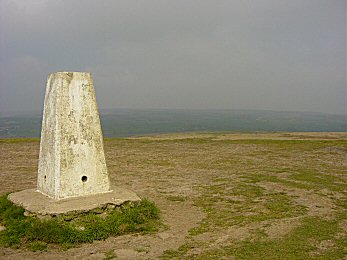 The trig point on Baildon Moor 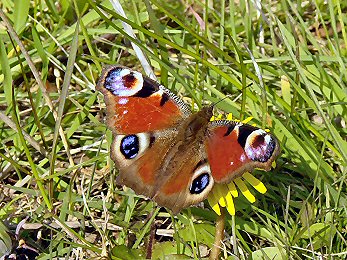 During the superlative woodland section I crossed over Gill Beck via easy stepping stones and began my first climb. This was interrupted by a brief meeting with two chaps exercising their greyhounds. It's not rare for me to have such meetings when walking close to urbanisation to have such encounters. I have often met small groups with greyhounds scouring the nearest countryside, no doubt combing the area for a rabbit or two. Not my choice of sport...or meal at all. I continued on climbing to the fringes of Baildon Moor. Soon I arrived at a rock outcrop and my second evidence of walking close to the city. The rock outcrop, magnificent when left alone, had been scarred with inane graffiti. I was disgusted to see the shame brought upon the craggy feature. Sadly the attack on Baildon Moor was to get worse. 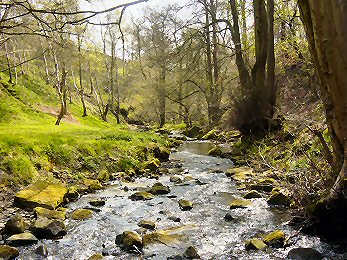 Shipley Glen is one of Bradford's natural jewels 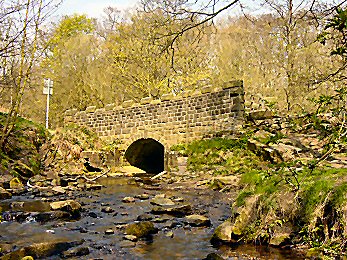 I climbed on past the rock outcrop and onto the moor. The path took me close to an estate but there were many paths crossing the moor in all directions, a sign of many wanderings and mini explorations. I left the houses to my south and walked towards a public car park where cars were parked enjoying the views on this great sunny day. The moor was a pleasant walk until I neared the car park. Soon the litter began to appear. The closer I got to the car park the worse the littering defacement of Baildon Moor was. Newspapers, Magazines, Crisp and Sweet packets, Bottles, Containers, Boxes...the list goes on. It was awful and I made my way from the car parking area as quickly as I could. The graffiti on the rocks was nothing compared to the disgusting mess caused by the litter vermin. I won't be here again unless the council do something about it. Baildon Moor deserves much better. I headed up the moor where things were much tidier. The simple fact about litter spreading people is their laziness so I was certain it would improve by walking distance. And it was for the remote moor was litter free and I was back in pleasure. Th bad times were over and I enjoyed the freedom of the moor top which provides excellent views of Bradford in clear weather. Alas for me it was hazy and I could see very little beyond the moor. I relaxed for a while at the peak before heading down south west to Braken Hall and Shipley Glen. 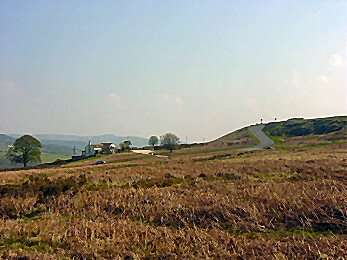 The view towards Leeds from Baildon Moor 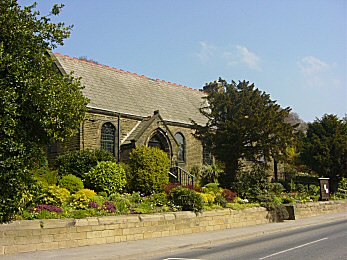 Shipley Glen was a real delight. The paths are good, the area litter free and the habitat lovely. The trees in their low shelter were well in leafy advance of ones higher up. In the glen I came across a group of Peacock Butterflies, once rare in the north of England but now more common. The Peacock Butterfly, as with the Bluebell Flower is a true harbinger of Spring. It is a beautiful coloured species, a great addition to the walkers fauna and I enjoyed watching the group fluttering about catching the warming sun. One provided me with a great photograph before I left the glen and began the homeward leg of my journey. I followed a series of good paths from Shipley Glen including the Dales Way Link to Golcar Farm and Millennium Way to Birch Close before following a good path to Ash House Farm followed by a walk along Sconce Lane to Low Springs. It was a really nice quiet section of the walk. After the lovely bluebell woodland of Low Springs I crossed a series of fields back to Hawksworth.

Footnote: I really enjoyed the walk to the wide open expanse of Baildon Moor and seclusion of Shipley Glen. In fact apart from the littered car park section it was ideal. Stay on the main path avoiding the litterbugs at the car park and I vouch this as a truly great walk. The best walk in Bradford.