Old Man Of Coniston, Black Crag, Swirl How and Wetherlam

Summary: The walk on the Coniston Fells with the brilliant ridge walk between The Old Man Of Coniston and Swirl How has been a favourite of mine ever since I first walked it a few years ago. The stiff climb to the Old Man, the ridge and then the exciting crossing of the Prison Band to Wetherlam was a memorable experience on my first walk in Coniston. This time I wanted to make the walk even more interesting and thus after all the classic sections I planned a different route from Wetherlam back to Coniston. Instead of heading straight back I drew up a course which would take me north east on Wetherlam Edge to Birk Fell and then on a circuit of the fell to Tilberthwaite Gill. From the gill I would follow the path through Hole Rake to Coniston. Join me on the walk and I'll try to convince you to try it. It was absolutely superb with the beautiful and quiet Tilberthwaite area making for a fitting conclusion to a brilliant walk. 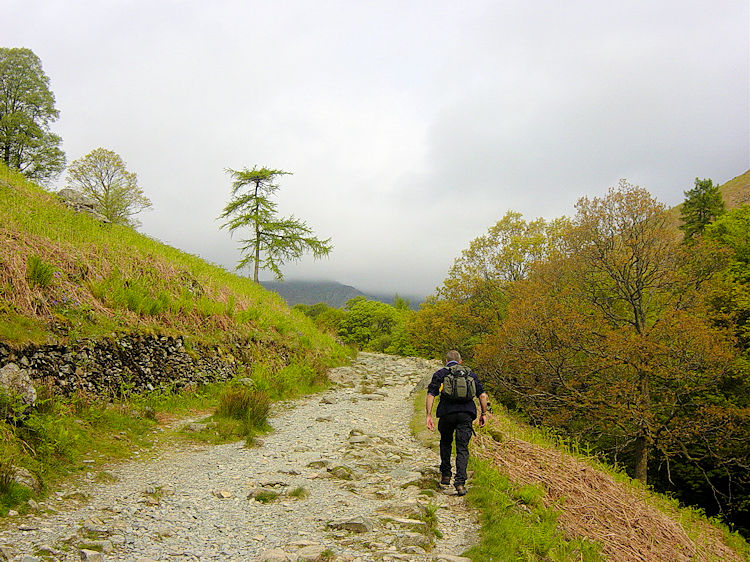 Walking from Coniston to Miner's Bridge 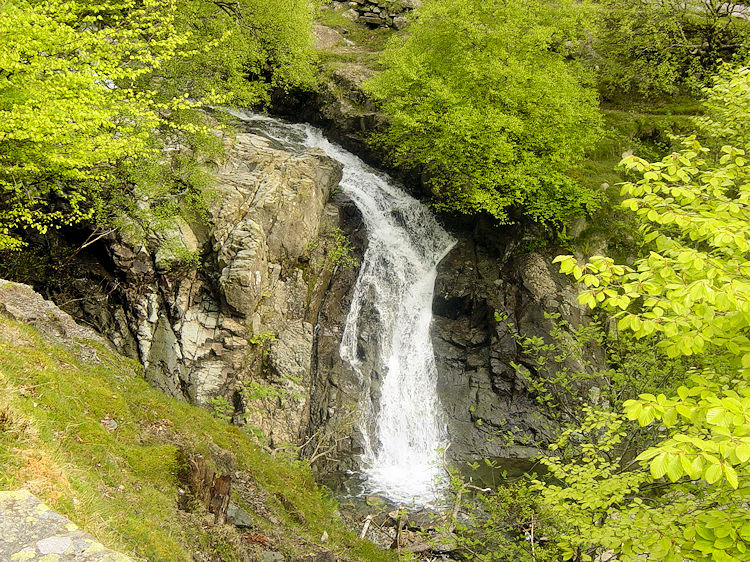 The weather forecast was not promising. The breakfast report on the BBC told us heavy skies were approaching from the west and that they would arrive in the Lake District in the early afternoon. Time to get a move on then. After eating our Ambleside guest house breakfasts Steve and I drove along the long and winding road to Coniston. As we arrived in the popular lakeside village we noticed cloud was swirling around the top of the Old Man at around the 2,000 feet level. Had the bad weather arrived already? As it was not raining we set off on the walk, I with anticipation and although I was of unaware of it at the time Steve with trepidation. I knew the walk we were embarking on and Steve did not. Coupled with Steve's innate reservation of walking at height in unknown areas in no visibility I can, with hindsight, understand his concerns. Oblivious to Steve's concerns we began the climb into cloud straight away. 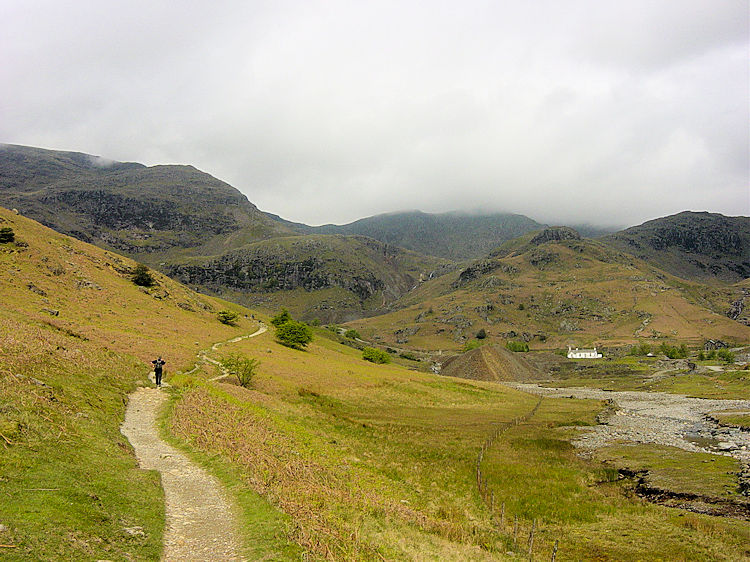 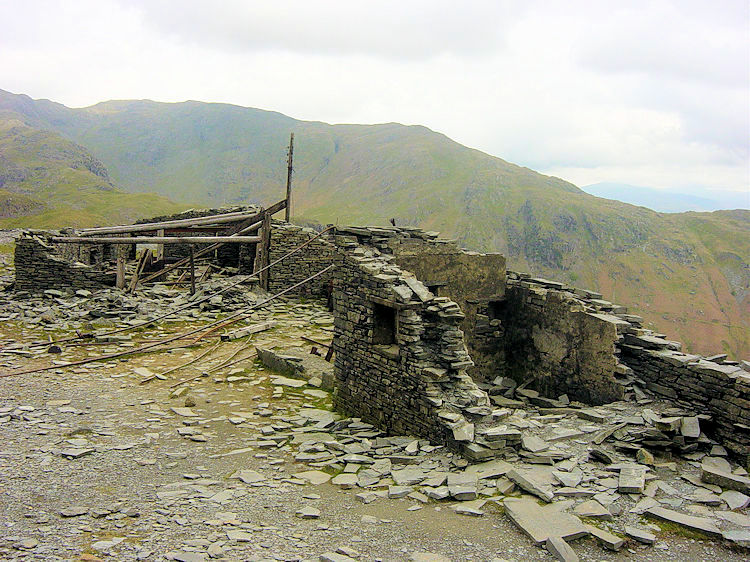 The first two miles of this walk are gruelling, a meandering climb up the mountain with the gradient getting more severe after Miner's Bridge, every step more taxing the higher you get. As usual Steve soldiered on with me striving to keep up although as this was now our fourth day in the lakes I found the climb easier than on the earlier days. We followed the winding path up the mountain past Crowberry Haws, Stubthwaite Crag and Colt Crag. Next we reached the level where derelict quarry buildings were scattered. There were old mine workings too with rusting machines and disused tunnels next to the path. It was a good place to explore and a good excuse to take a break from the gruelling climb. 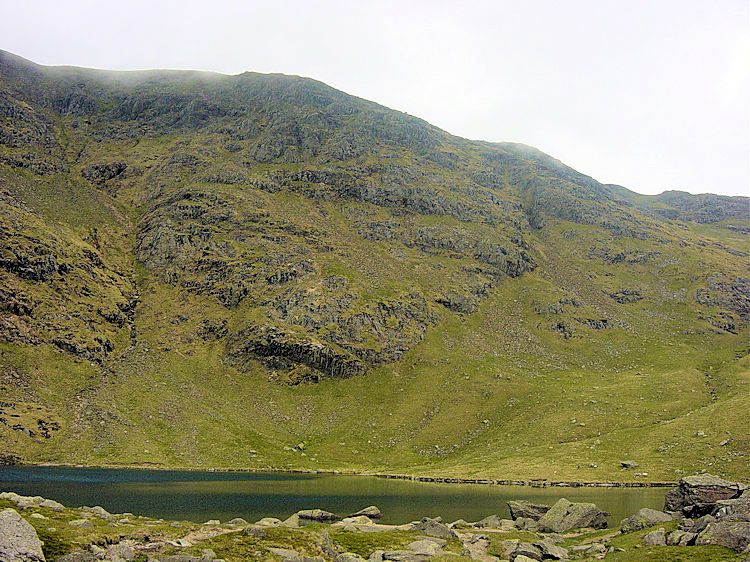 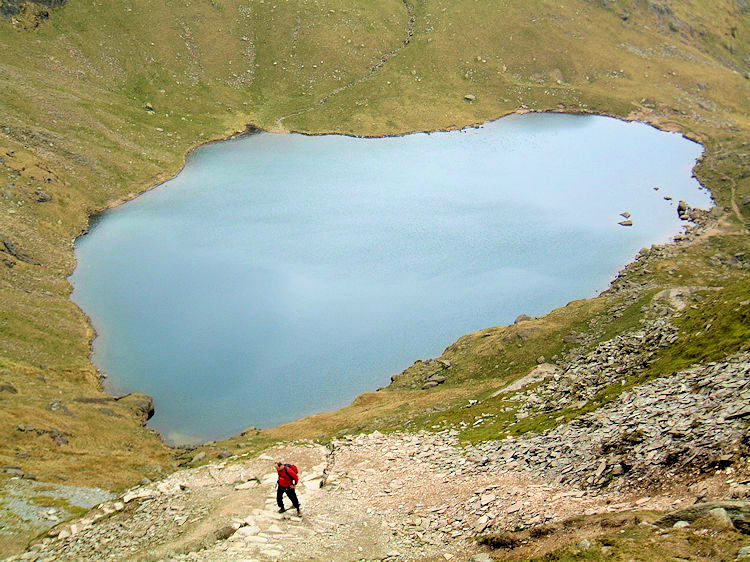 During the climb to the Old Man at the point we reached Low Water we met a threesome also making the ascent. It was a mature lady with her son and daughter. In conversation the lady told us she was climbing the Old Man for the second time. She went on to tell us the first time she climbed it was over 50 years ago. Now that is impressive, to climb such a challenging mountain fifty years after the first time. Both Steve and I were impressed and we wished them all well on the remainder of their special walk. We walked off from Low Water after the chat to make the final strenuous steep climb to the top of the mountain. 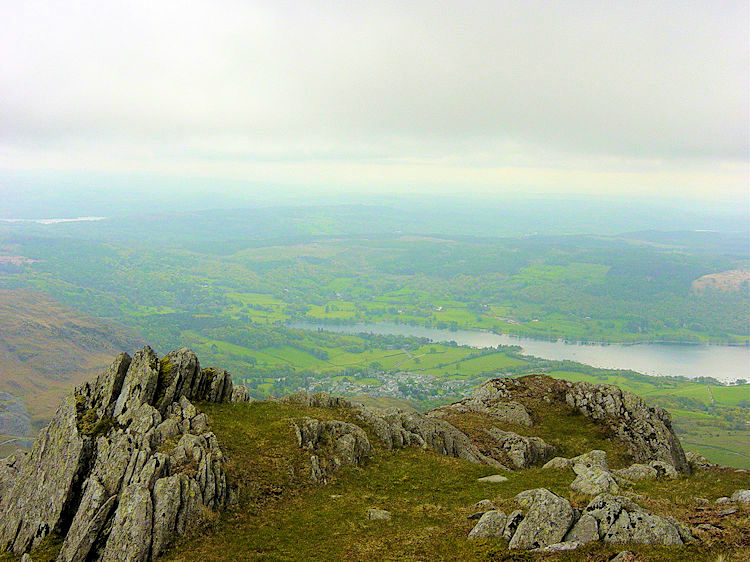 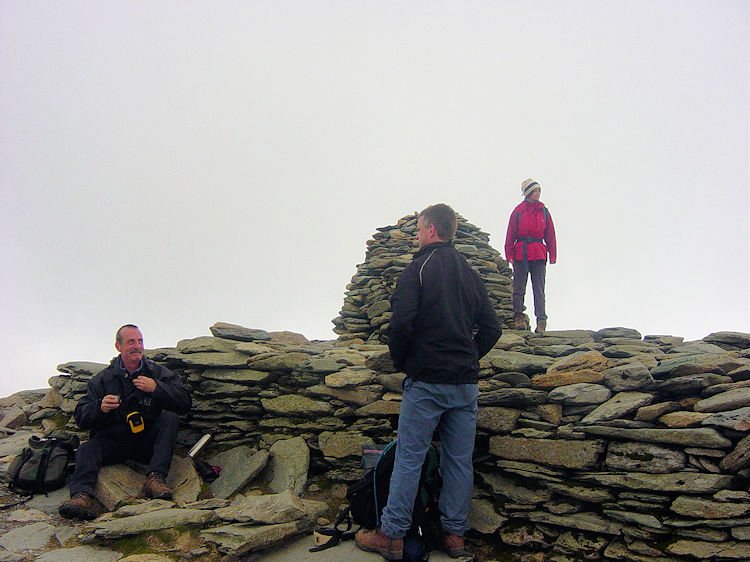 Resting at the summit of the Old Man

The Old Man Of Coniston is a magnificent mountain. It dominates the skyline of the village which bears its name making it almost an obligation to climb it when visiting the area. Indeed Alfred Wainwright wrote "there are few days when the Old Man does not play host to visitors and in summer the blazed path to the top carries processions of pedestrians young and old, and there is often a noisy congregation at the summit" The Old Man is definitely very popular. It has also been a very obliging mountain for practically all the dwellings in the area are built with stone and slate from its flanks. Evidence of frenetic mining activity are clear as soon as walkers from Coniston emerge onto the open low fells at Miners Bridge. About 400 metres up the valley the right of Levers Water Beck is a terrace of old mining cottages. Just beyond them are more old mining buildings, one of them now converted into a youth hostel. Slate heaps are scattered close around them on the valley floor and there are then the abandoned quarries such as the one we passed on the way up. 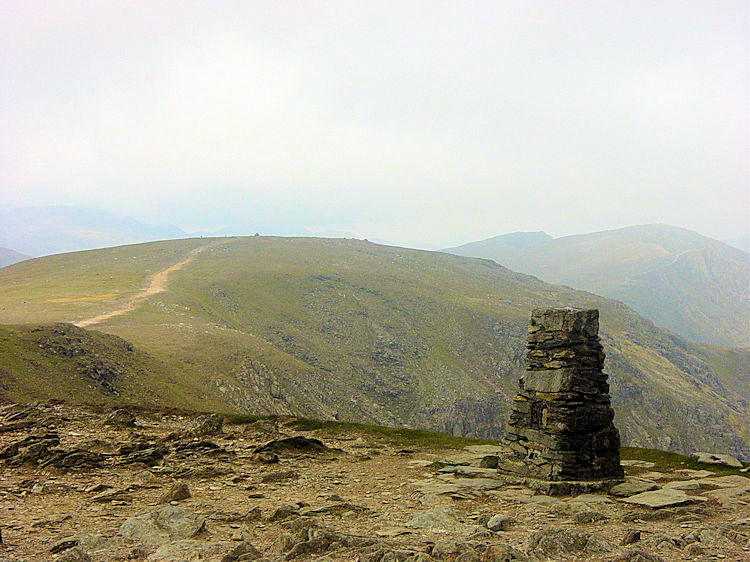 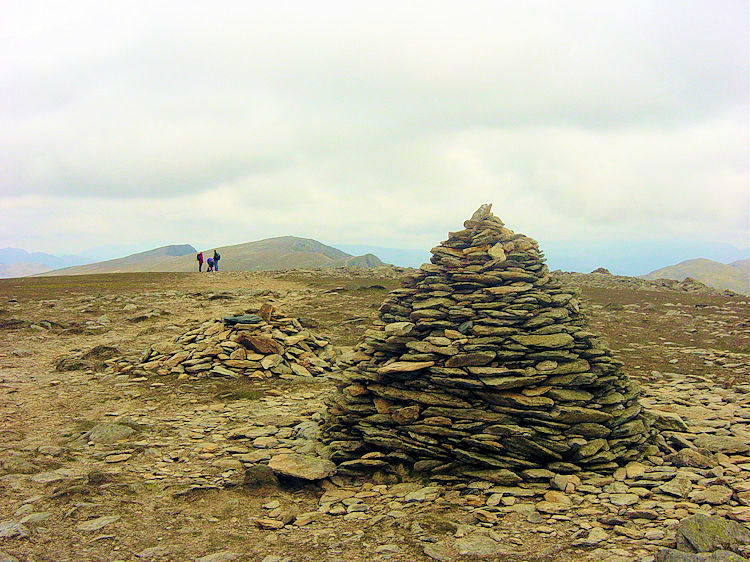 During that final push from Low Water to the summit we had walked into the cloud which had swirled around the Old Man of Coniston during our ascent. It was not any worse and there was no hint of rain during our break at the summit but it was here Steve told me he was not continuing. "I am off straight back down. I do not fancy being stuck up here if, as forecast, the weather closes in" he stressed. Despite my explanation of the easy ridge walk to Swirl How in the north he could not be persuaded to change his mind and so after my vain attempts at reassurance he left and headed back down the Old Man the way he had came. It was a weird departure though, quite surreal for as soon as Steve had left to begin his descent the cloud began to lift off the Old Man. I could clearly see the entire length of the exciting ridge leading to Swirl How. I could also see the cloud lifting off Wetherlam. Despite the forecasts of the weather closing in quite the opposite was happening. Though it never quite succeeded the sun even attempted to break through. 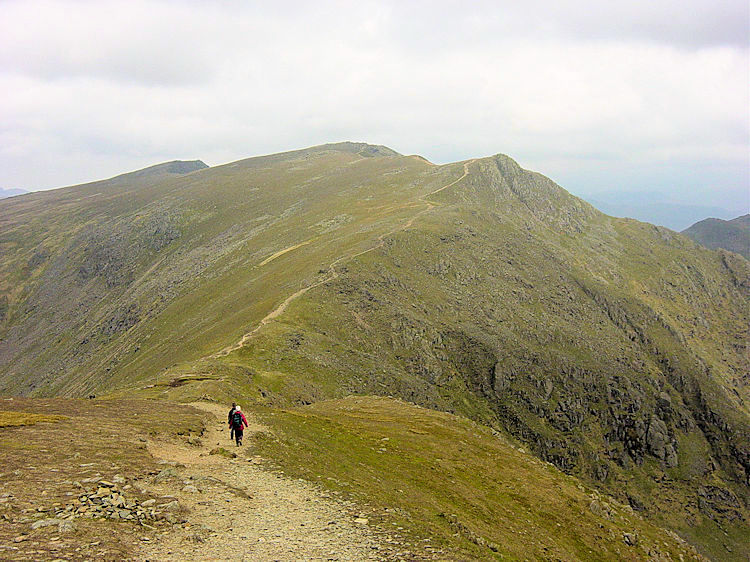 The magnificent path to Swirl How 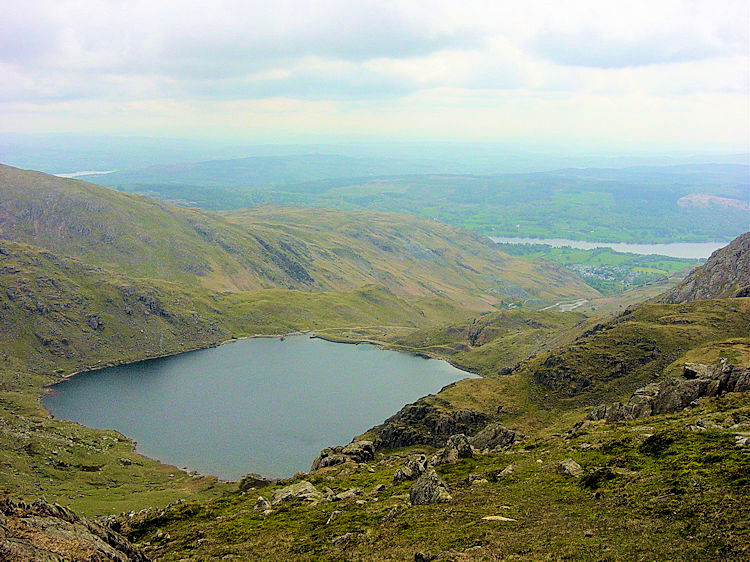 Looking down to Low Water

The walk from Coniston Old Man past Black Crag, Wray Crags and Levers Hause to Swirl How is one of the best two miles walking in all of the Lake District. I thoroughly enjoyed the walk along the lofty path and as I did so I chatted with the lady I had met earlier. also found plenty of time to look over to the Langdale Pikes and Scafell range to the north west. During the ridge crossing to Swirl How the weather continued to improve which was just as well for the trickiest part of the walk was almost upon me. 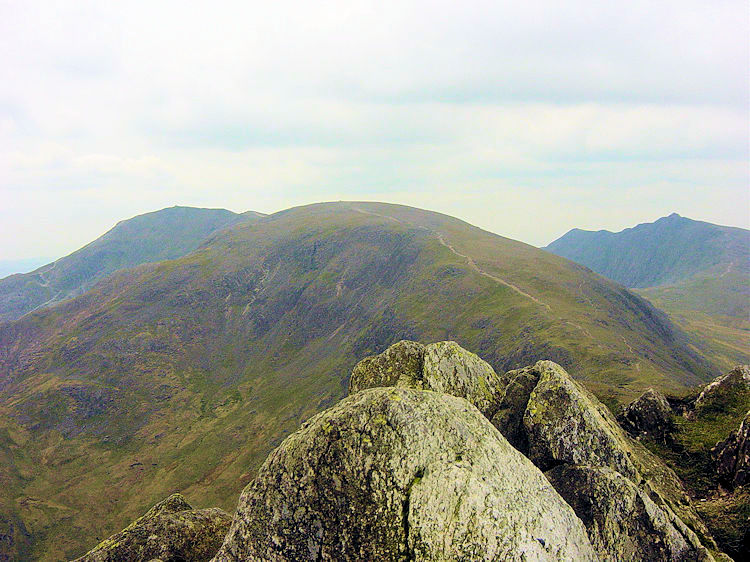 View from Swirl How to the Old Man and Dow Crag 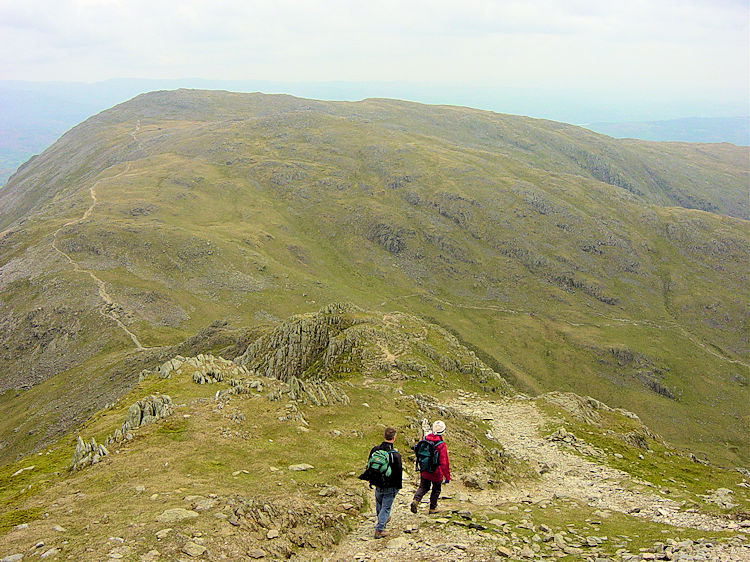 At Swirl How take a break. The views are tremendous from here and probably the best vantage point in all of the Coniston Fells. The height here is 801 metres, only two metres less than the Old Man of Coniston. The views back along the ridge are great and although it is only a two metre difference the Old Man looks massive from Swirl How. The view of the mountain and neighbouring Dow Crag is one to admire. Enjoy the full panorama and then make your final look to the east to Wetherlam. This great mountain is the next target on the walk but to get to it you have got to go to prison. There is only one path linking Swirl How to Wetherlam, the Prison Band. The band goes straight down from Swirl How to Swirl Hause, a drop of almost 200 metres and in some parts it requires the use of hands as well as feet. It is never precarious or exposed, just steep and rocky so care is needed. 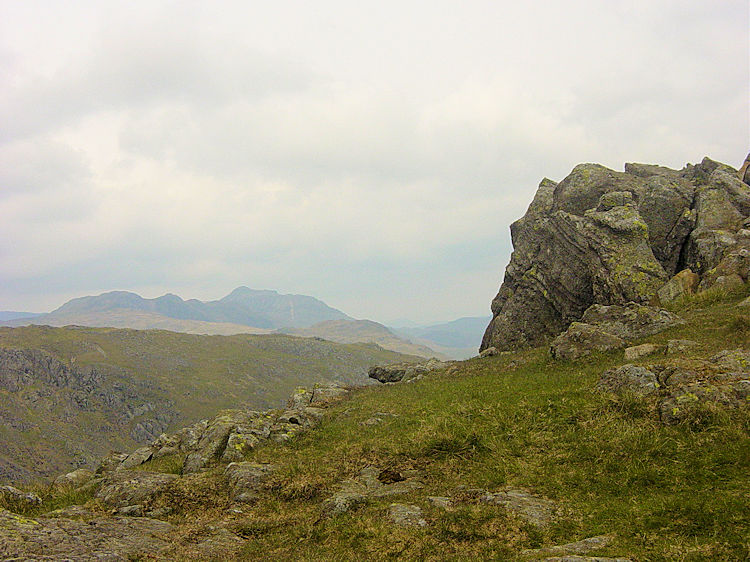 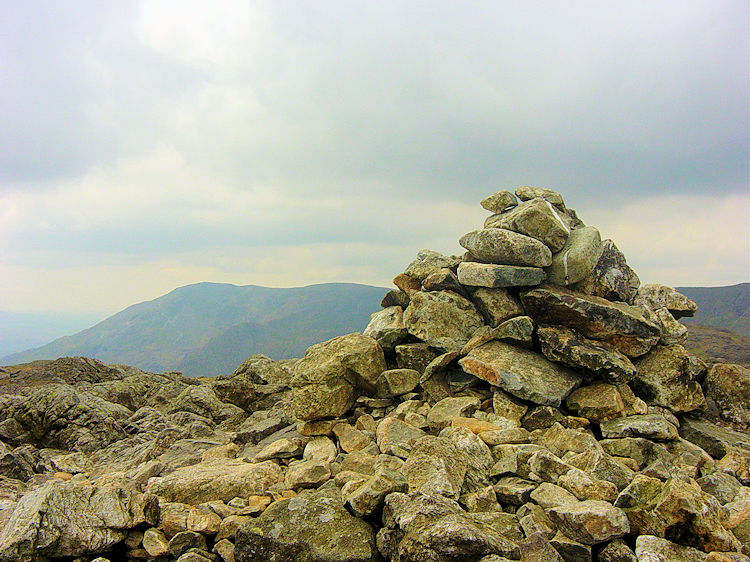 After Swirl Hause the climb to Wetherlam is straight forward, a steady climb of 130 metres in just over a kilometre of walking or a little more if you choose to include bagging the supplementary peak of Black Sails. Wetherlam is an interesting mountain and the summit is a crop of undulating rocky steps. Wainwright said of the summit area "There is much rock about, weathered to an ashen grey colour but when broken revealing the tinges of brown characteristic of the spoil heaps of the copper mines on the lower slopes. The highest point is occupied by a large cairn. Although the summit is much trodden it bears little imprint of paths". That is true, make sure you navigate your way from the summit to the right path you want to take down. I had my way down already sorted. 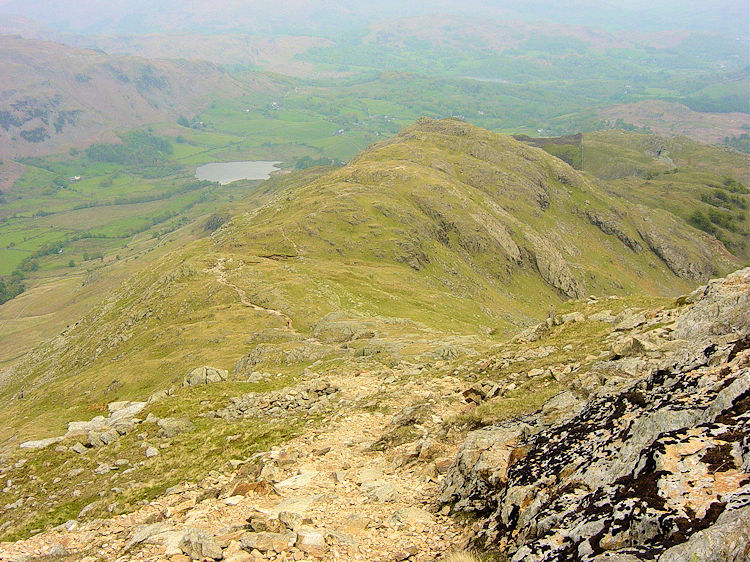 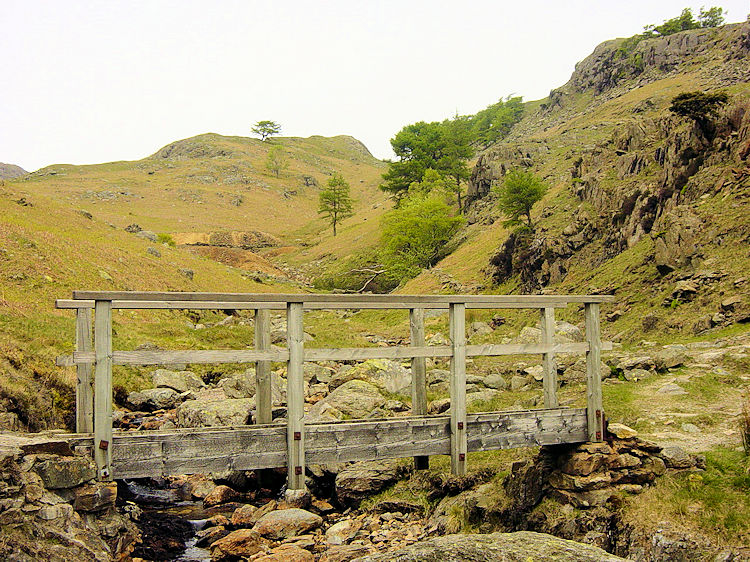 After Wetherlam the traditional walk tracks south off the mountain back to Coniston but as I had done the traditional before I wanted to make this different. I am glad I did for I feel I found a superlative enhancement to a classic walk. I left the summit of Wetherlam by following a path north east along Wetherlam Edge. The descent was thrilling and like the Prison Band another occasion where hands as well as feet were sometimes required. The views to Little Langdale during the descent were delightful. After 600 metres of walking Wetherlam Edge I lost 250 metres in height and then the descent tapered off. I was now at Birk Fell Hawse. I took a last refreshment break in shelter and admired the scenery of Greenburn and Little Langdale before trekking east over Birk Fell Man and then south to Dry Cove Bottom then the enchanting Tilberthwaite Gill. What a special place I had stumbled across. There was a quaint old wooden bridge then an interesting small disused mine. Close by was a secluded ravine with waterfalls. There were interesting features all around and I could have explored all day. 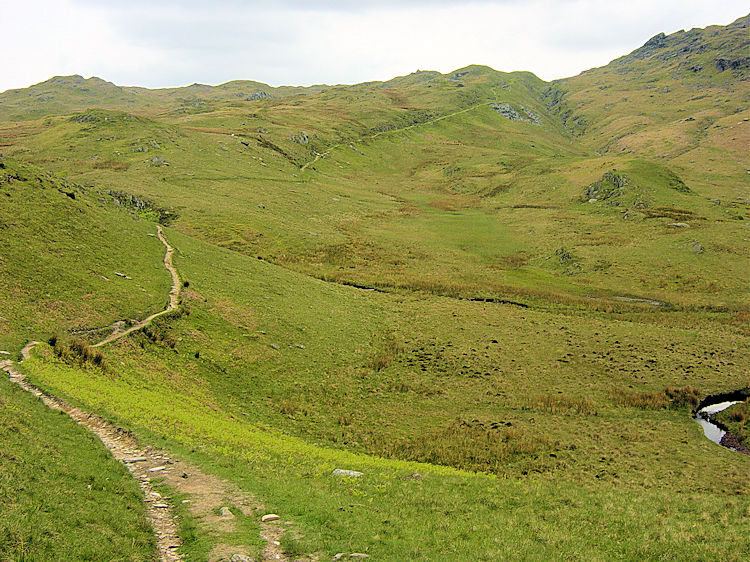 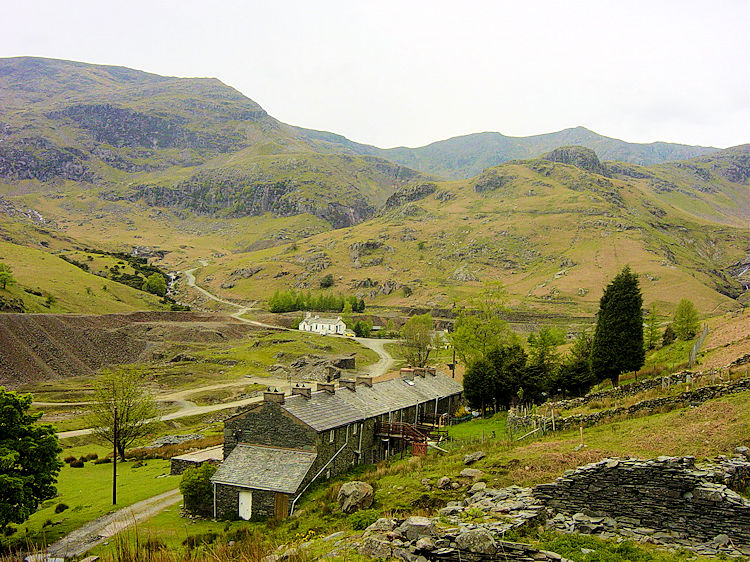 I had to leave Tilberthwaite though knowing I had a colleague expecting me back from the walk before too long. I followed the excellent path over Hole Rake and back to meet Steve in Coniston. I still had time to explore a quarry cut into the side of the Rake and then the waterfalls at Church Beck before heading back into the village. It was still fine when I met Steve who was waiting patiently in Coniston. We went for tea in a cafe. As we had our refreshment the bad weather which had been forecast arrived and it started to rain. Too late!