A personal record of my walk of the Yorkshire Heritage Way with a written journal and with photographs. Tracklogs for GPS units and for use with Google Earth are available for download for each stage. 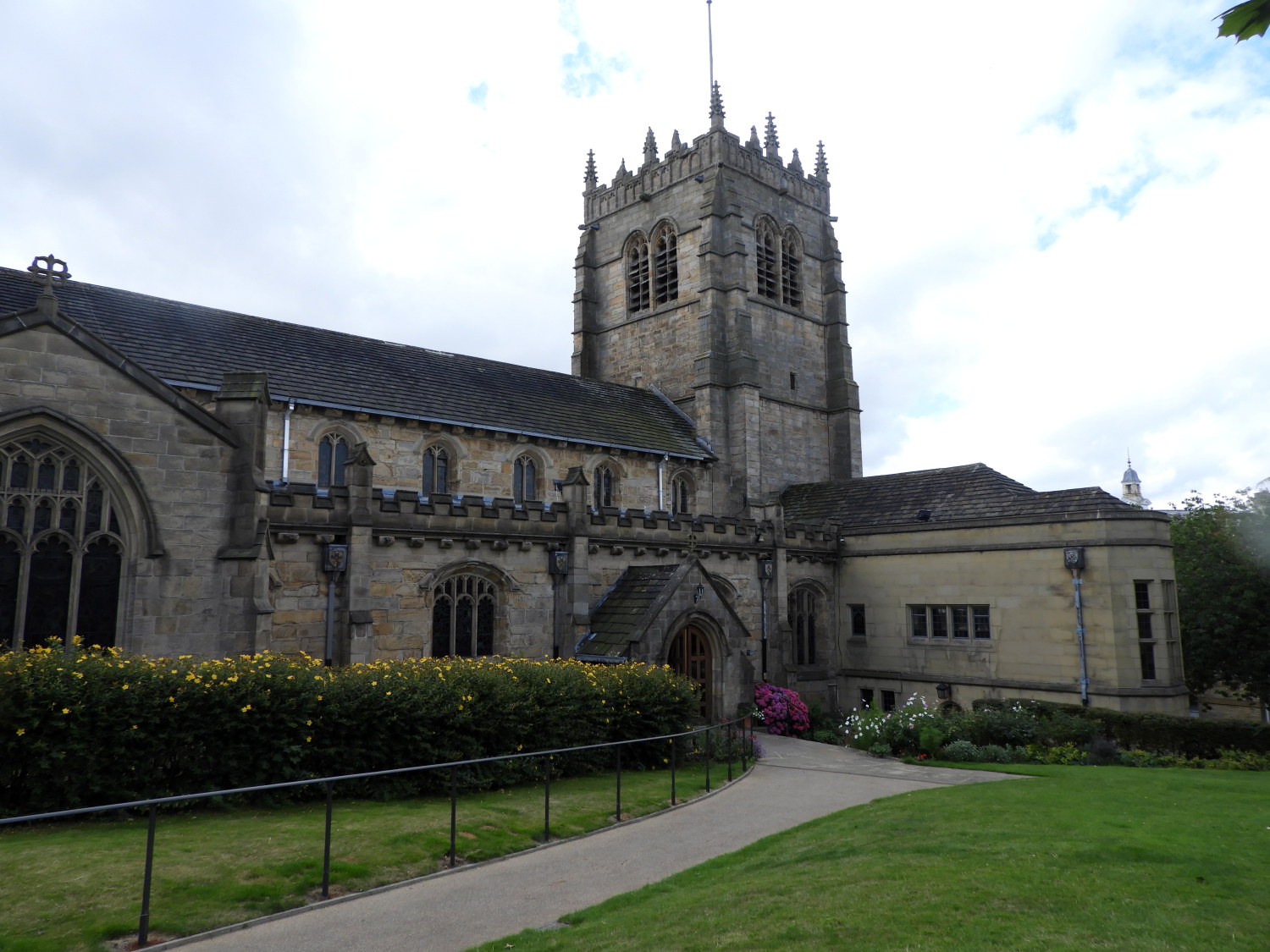 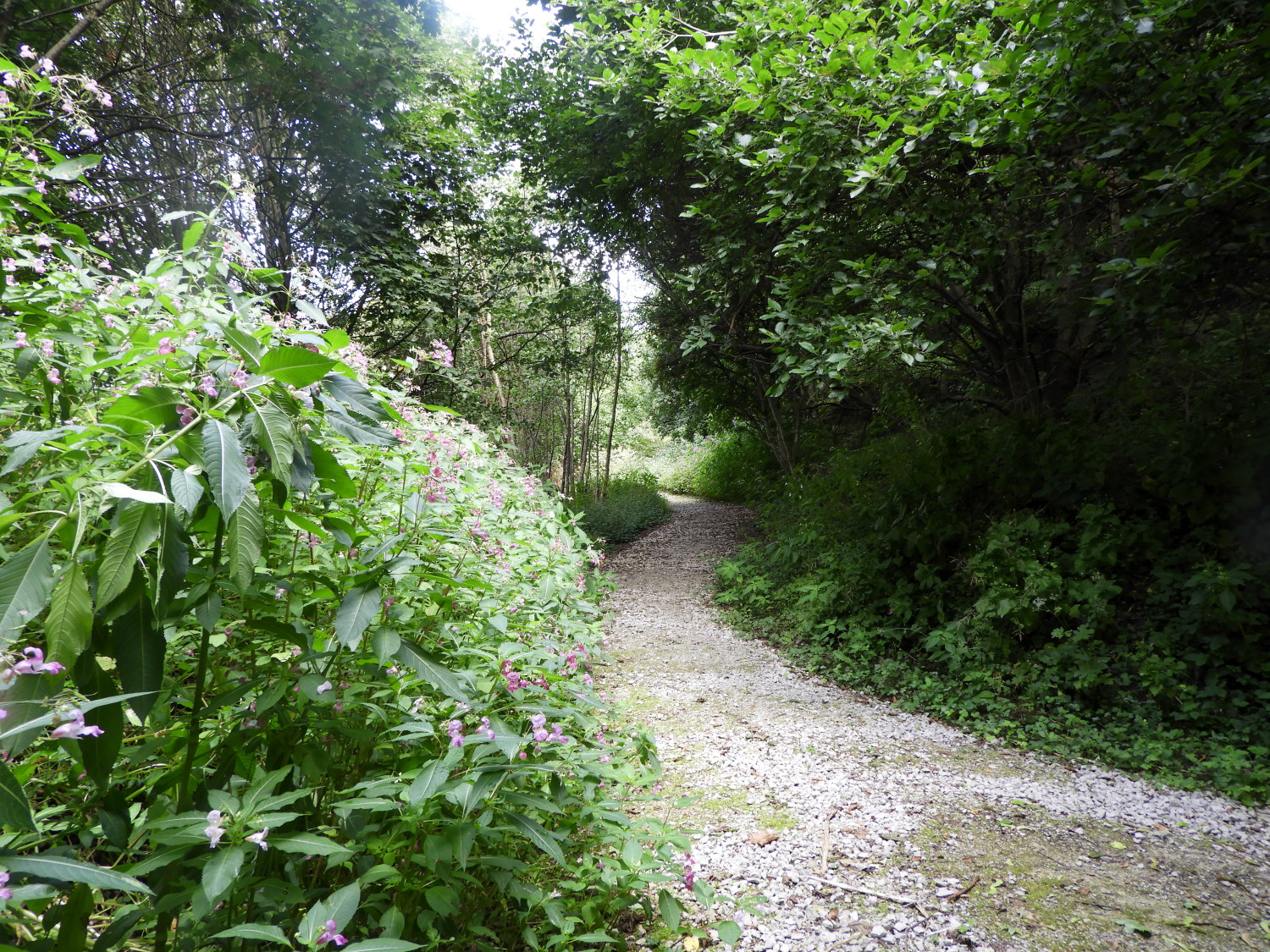 Having just returned from walking the Rheinburgenweg in Germany I was full of beans and enthusiastic about doing another walk or two. And, as it happens, I had just read an article on this new long distance walk. Which happened to be in my local area, and with my wife Lil's help, possible to do over three consecutive days without the need to arrange accommodation. So, just two weeks after finishing one long distance walk, I set off on another. After being dropped off by Lil on Church Bank at 9.30am on a Monday morning I spent a little time looking around the exterior of Bradford Cathedral, which I freely admit, I did not know existed. Perhaps its outwardly appearance, looking more like a parish church than a stately cathedral, makes it one of the more inconspicuous high churches of England. After my brief visit, I set off on the Yorkshire Heritage Way by following urban roadsides, paths and tracks heading north out of the city, sharing the route of the Dales Way Link. 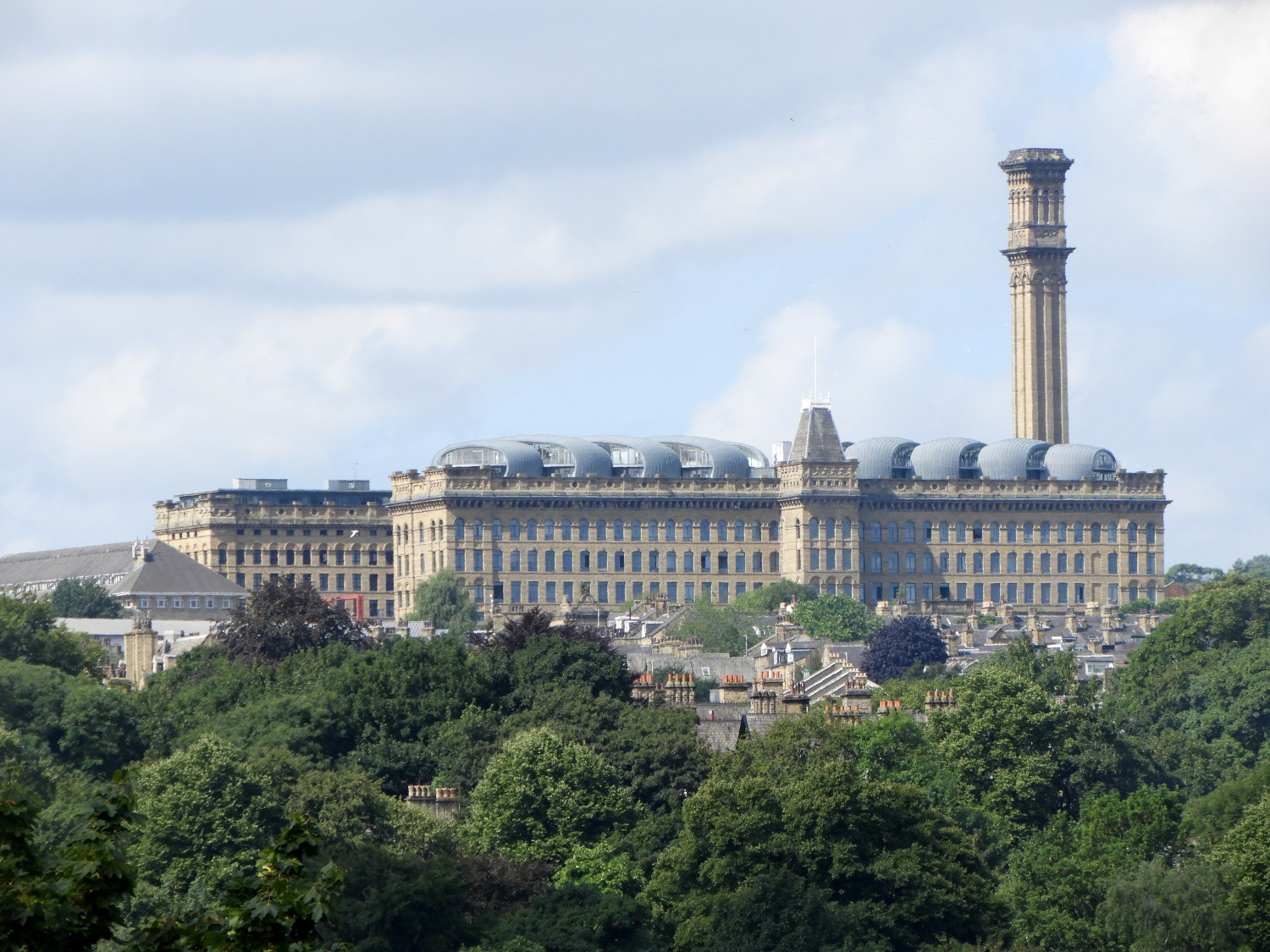 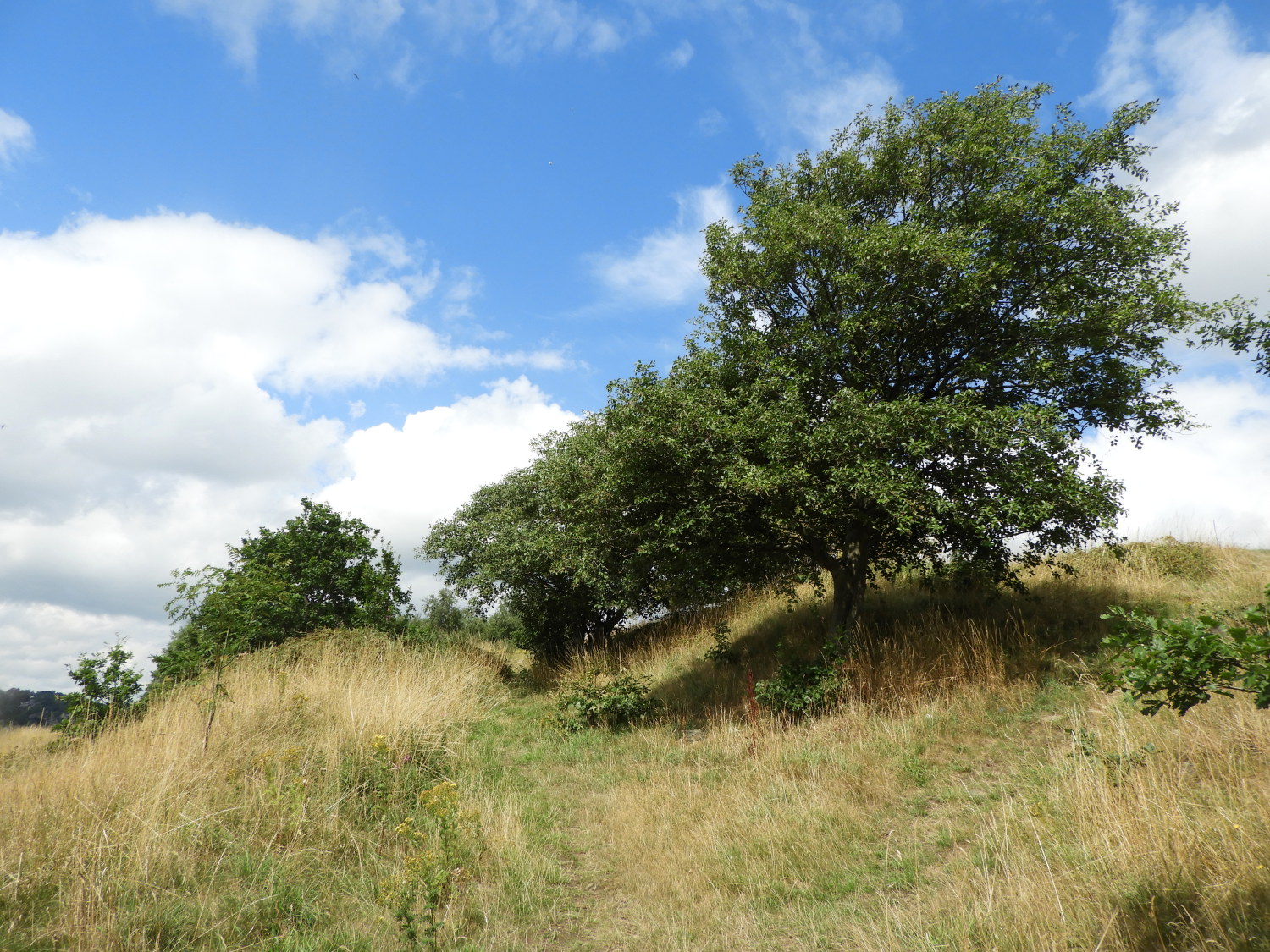 It was breaking out into a lovely sunny summer's day as I walked from the heart of Bradford towards Shipley and the moors north of the city. Reassuringly I sometimes came across newly placed Yorkshire Heritage Way signs and/ or Dales Way Link signs, both confirming my direction. On a couple of occasions I was caused to divert though, the first just after walking along Hollin Lose Lane where the lower of the two way options became a confusion of overgrowth. I tracked back a few yards from the jungle to find the higher, proper way. The motto: take care with the navigation and make sure of the right course. Particularly on urban pathways where branches go off here, there and everywhere. One could lead you to a children's den. I should know, I forged new paths in my childhood time. Anyway, with the help of frequent route checking, and with the reassuring sight of Lister's Mill being passed by on my left, I reached a path through a new housing build area and soon after I arrived at Bolton Woods. Which at the raised elevation of 150 metres, forty climbed above the city, gave me a wonderful elevated view looking south and back on the line of my walk from the city. 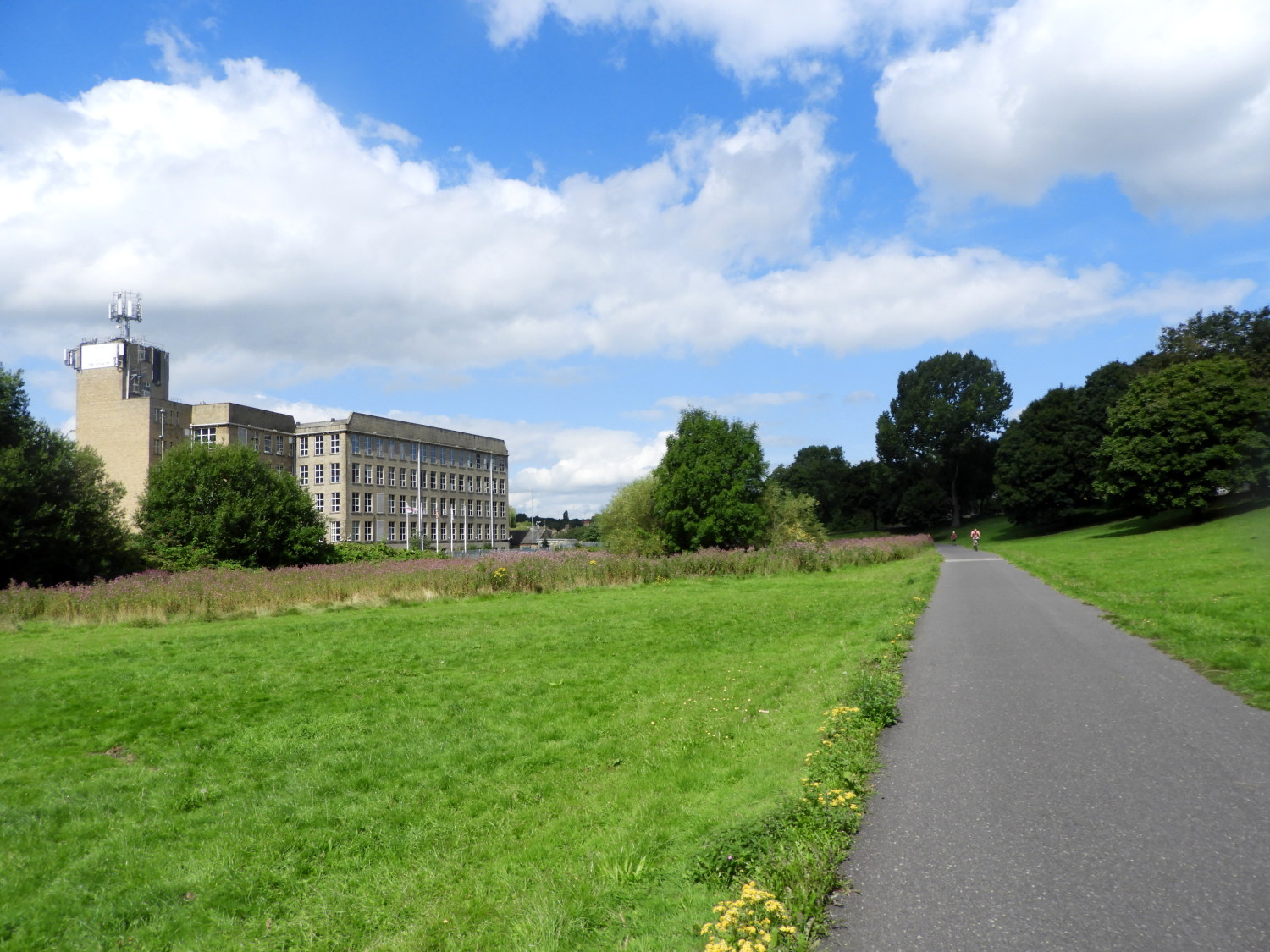 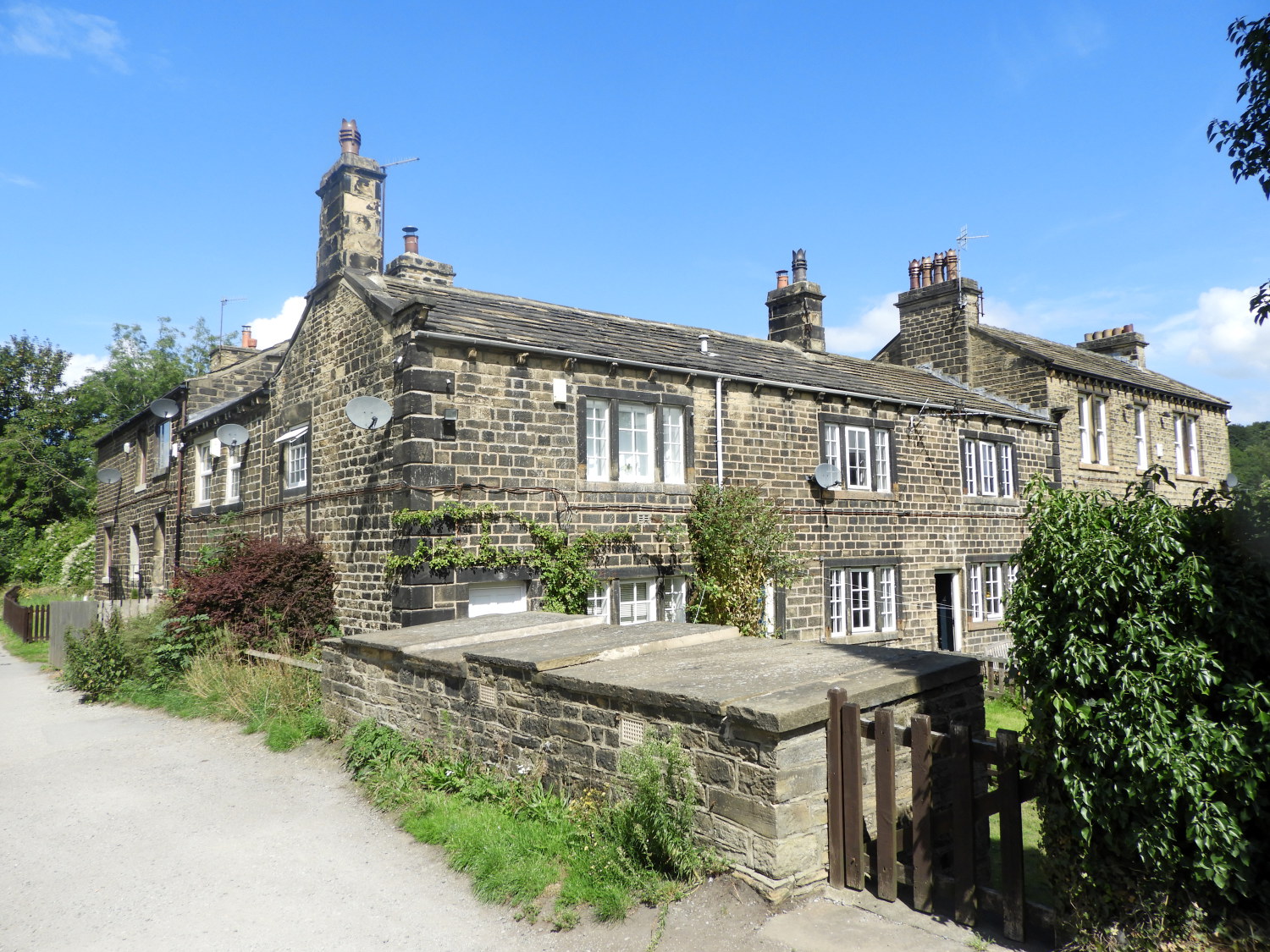 Before my ascent to Bolton Woods, which was effectively the first climb of the walk, the walk had the inner city feel. Following the descent of Bolton Woods the path developed a more spacious suburban feel as I closely followed the east side of Bradford Beck on its downstream course to its end in Shipley where it flows into the River Aire. The beck, once reputed to be the filthiest river in England, had as recently as the 1970's, contaminated water signs along this final stretch of the river. The 'Friends of Bradford's Becks' group have since amended the signs to take away the negative effect of their warnings as the water is of a better quality now. In fact they may be gone altogether now. I never saw one, instead seeing one reading 'Bradford Beck - Natural Once Again'. Soon after the delightful section following the beck to its end I reached the point of the Yorkshire Heritage Way where it follows the towpath of the Leeds and Liverpool Canal. Yet another delightful section with pretty stone built cottages beside the way pleasing the eye. 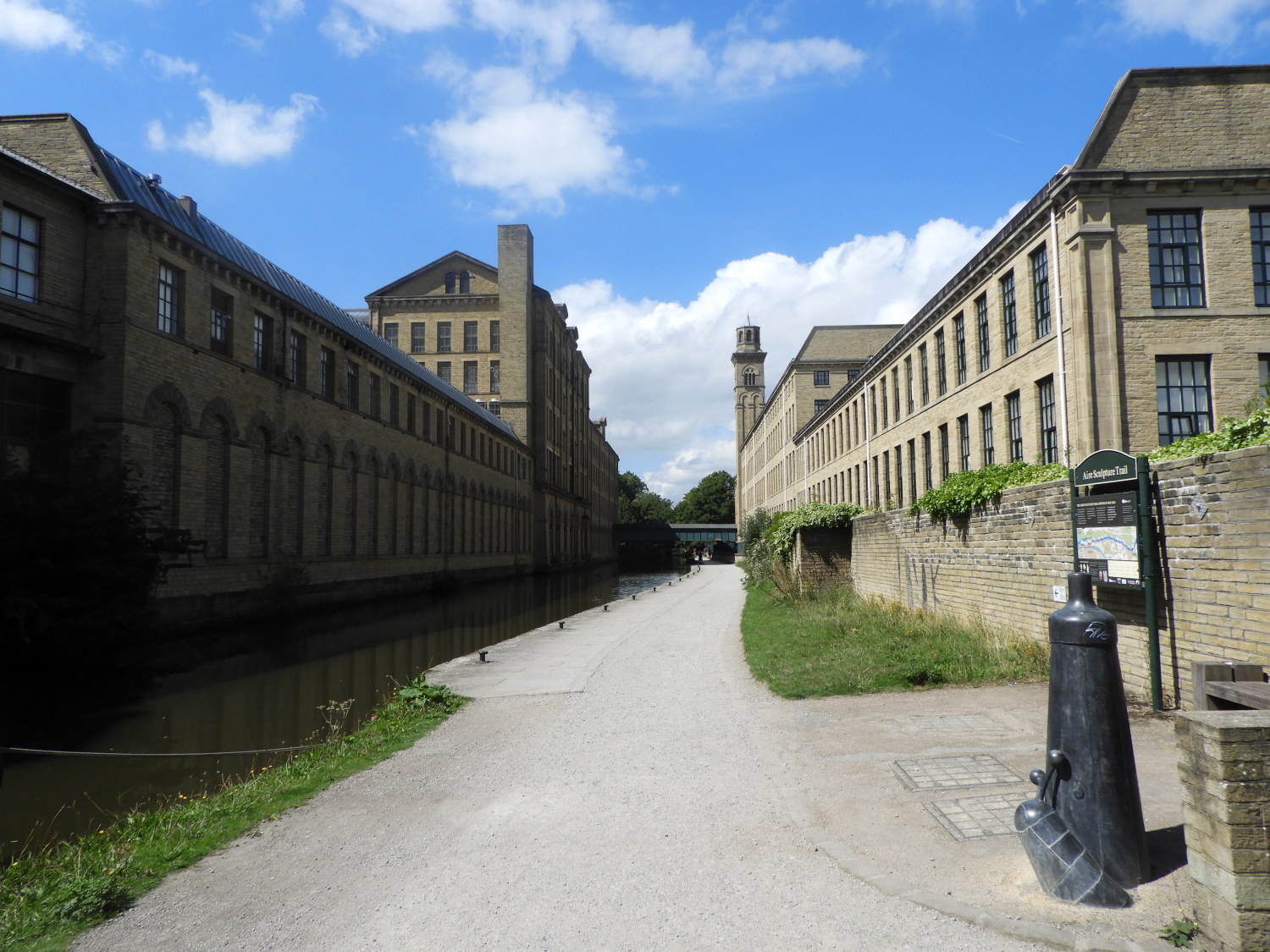 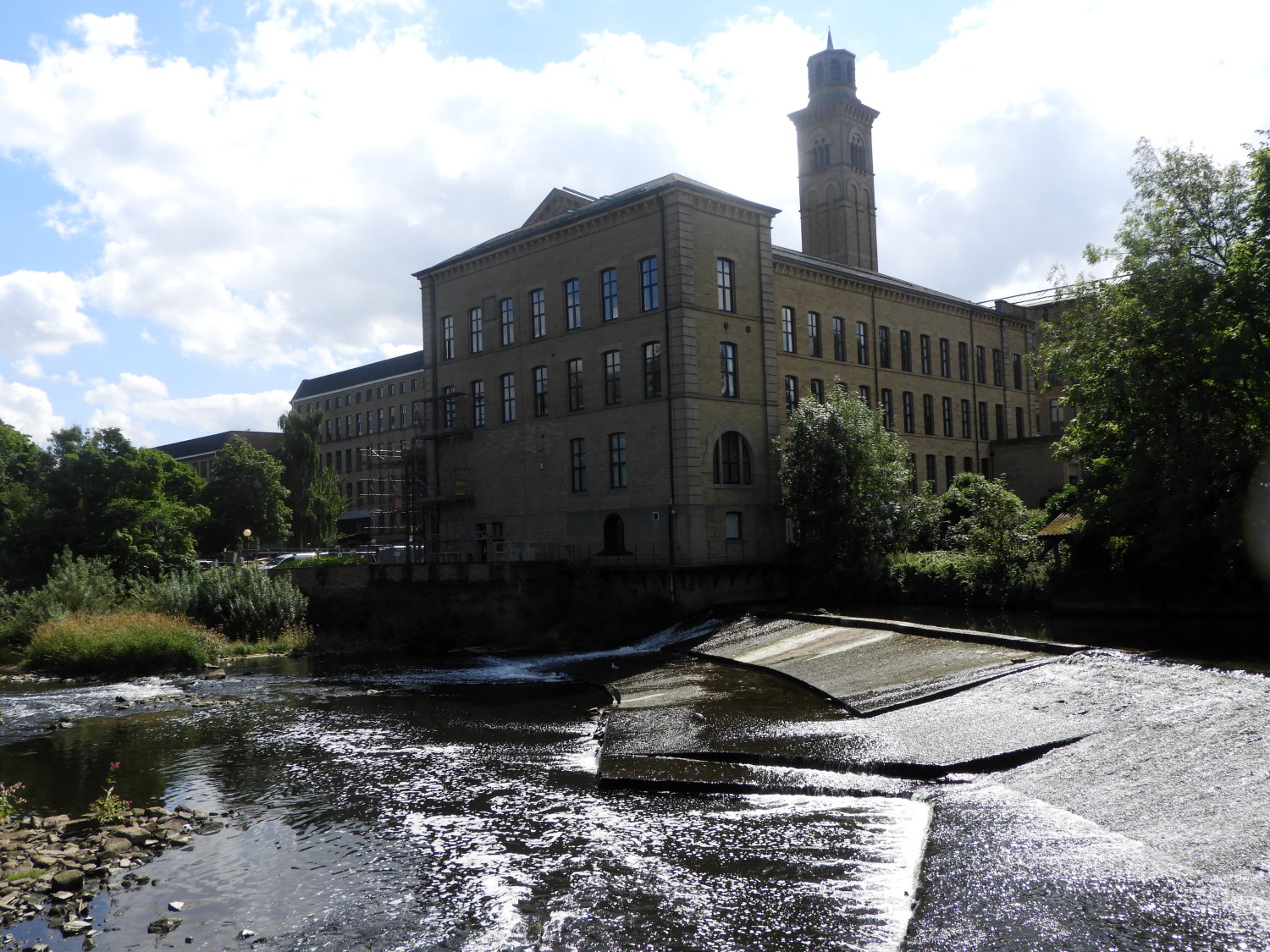 The next section of the walk was along familiar ground. I had walked the exact same stretch of the Leeds and Liverpool Canal towpath a number of times, the most dramatic part being the walk past the Victorian edifice that is Salts Mill. In its heyday the creation of Sir Titus Salt was one of the most prominent textile mills in England, so successful that an entire village grew up around it. Saltaire, named after Sir Titus, is one of the best examples of a worker's model village in the world. If you have time, it is worth departing the route for a half hour or so by crossing Victoria Road bridge to wander around the impressive streets of Saltaire. Whether you do so or not, back on the route of the Heritage Way, you soon arrive at the north side of Salts Mill, at the weir on the River Aire at the entrance to Robert's Park. Here people are usually milling around, some ambling, others taking boat trips up and down the canal and more just relaxing and taking in the view. It is a lovely spot. 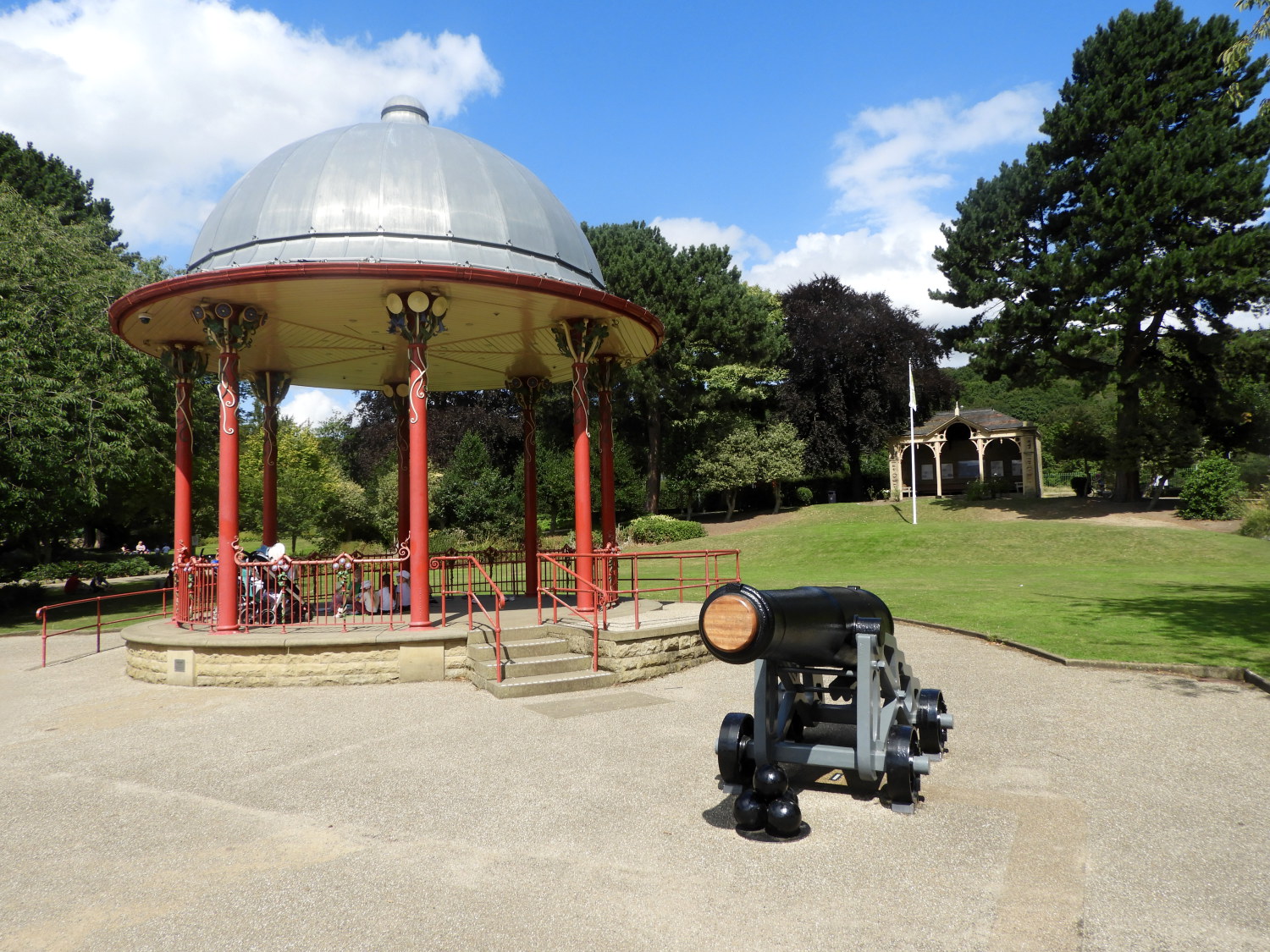 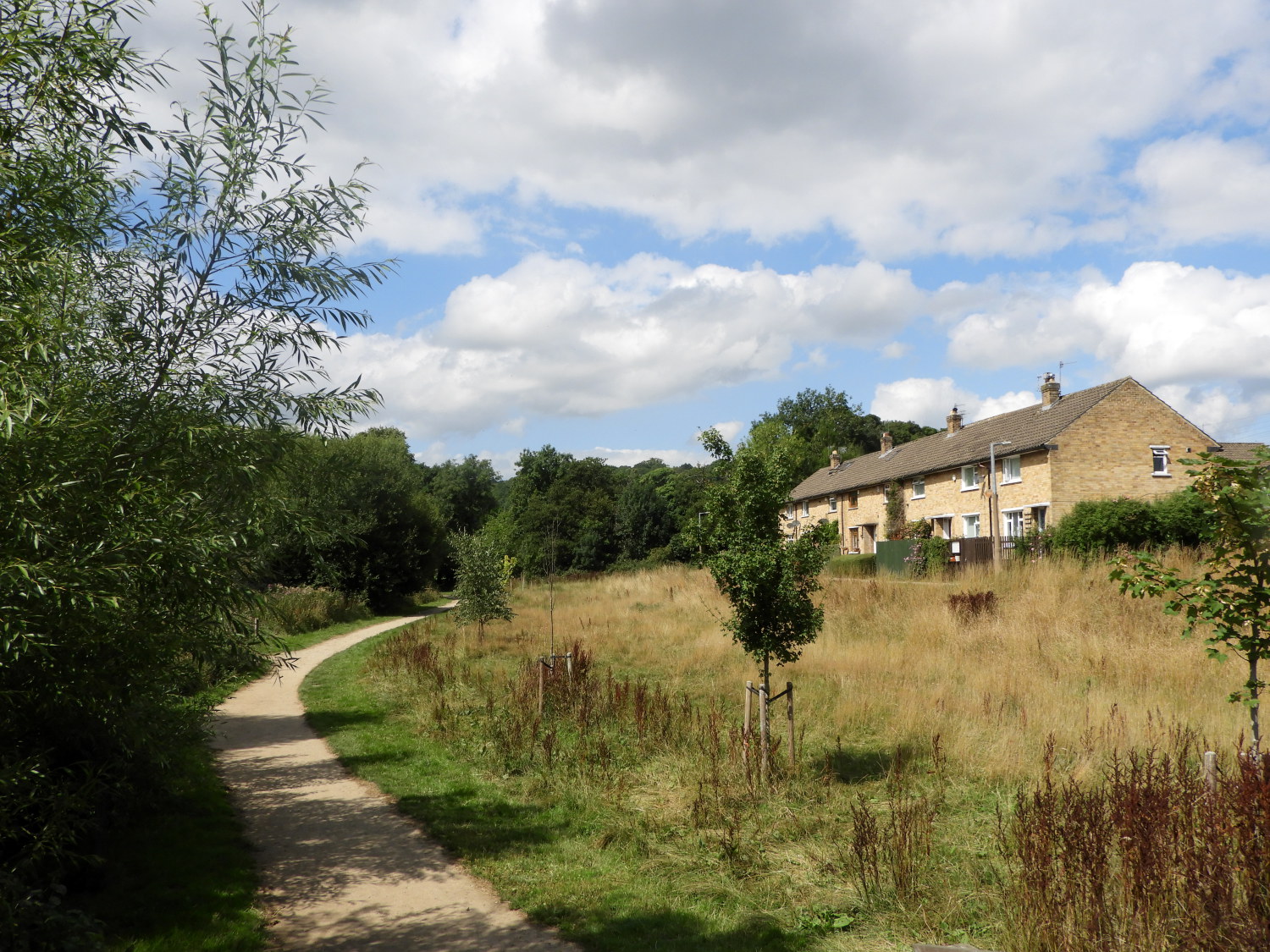 The path at Glenwood

Robert's Park is also testament to the legacy of Sir Titus Salt for he instructed William Gay, the Victorian landscape gardener, to design and create the 14 acre site which was opened to the public in the summer of 1871. The park was originally named Saltaire Park but was known informally as The People's Park, and Salt's Park until it was renamed Robert's Park in 1920. I enjoyed a leisurely amble through the park, meandering from the Yorkshire Heritage Way to see the Bandstand and statue of Sir Titus Salt which are found in the formal garden area on the north side of the park. Beyond the park I followed a green corridor beside the River Aire and past the houses of Glenwood. 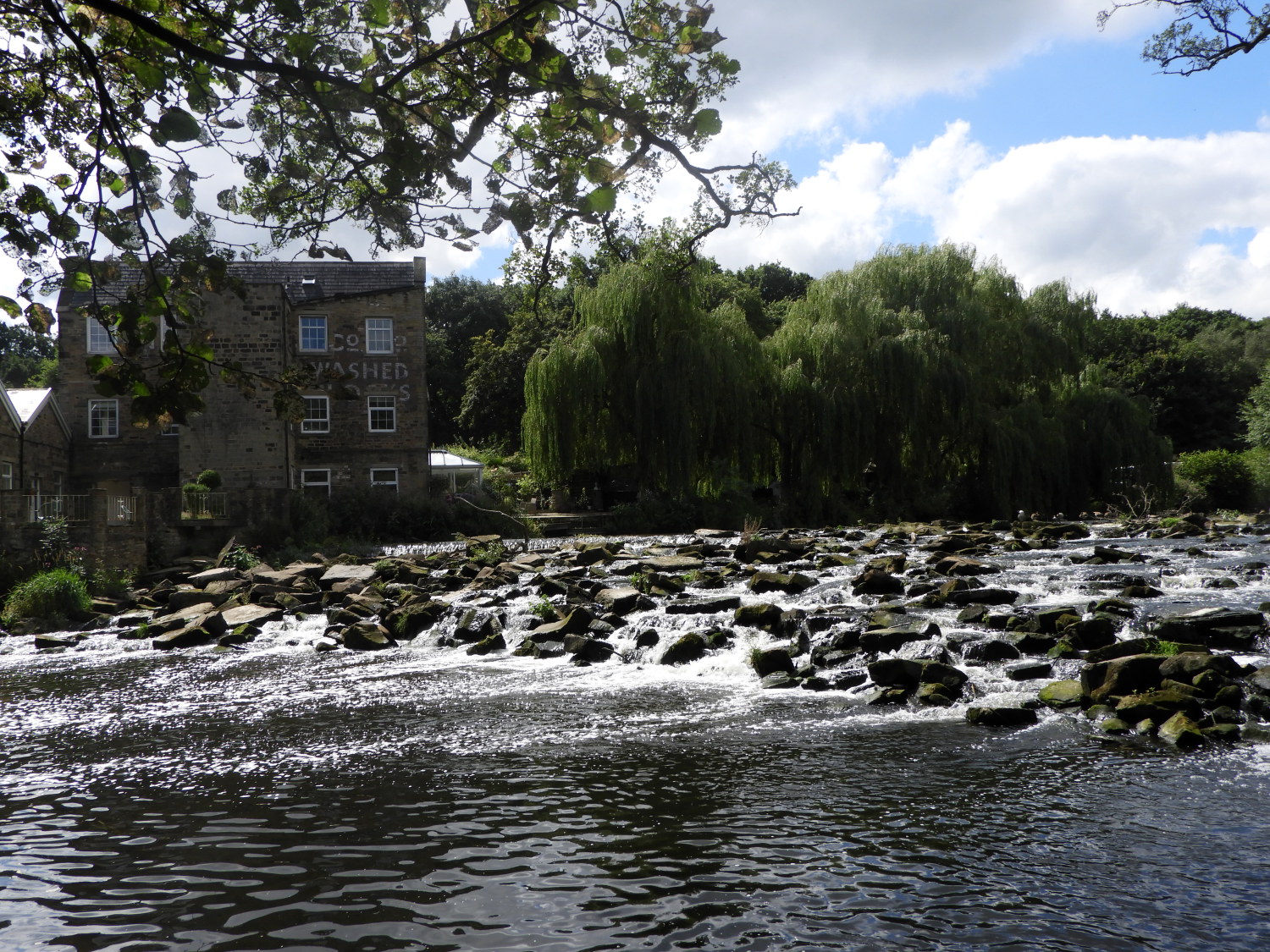 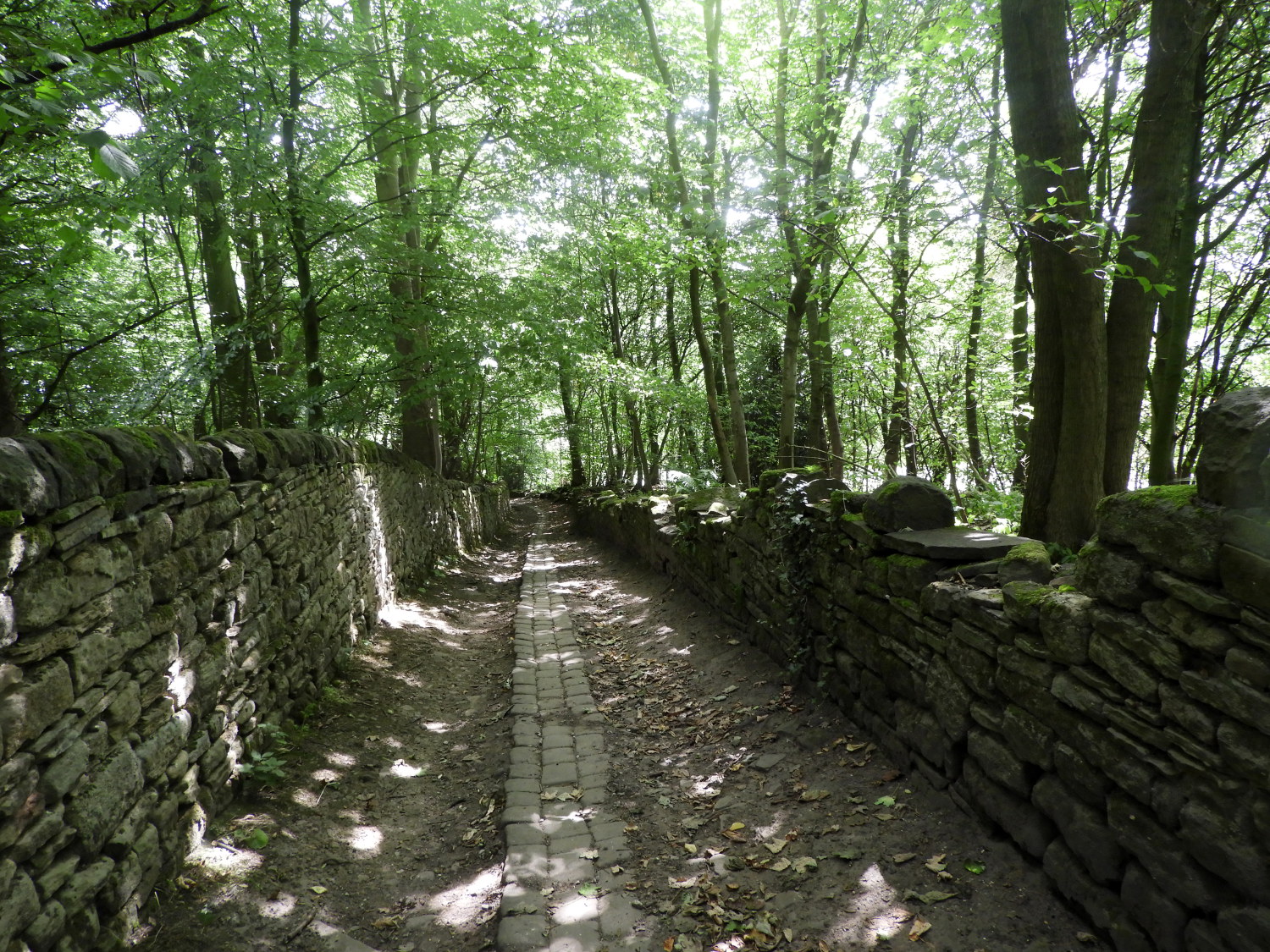 The path leading up to Shipley Glen

Soon after Glenwood, at the site of Hirst Mill I took a few moments to stand and take in the view of the mill and the River Aire cascading over a raised scattered rock platform, the remains of the mill weir. Then I left the River Aire behind by turning right to follow a northerly course towards Shipley Glen. I was leaving Bradford behind me now, climbing steadily towards the enchanting woodland of the glen, a woodland I first discovered over thirty years ago and one I have wandered extensively, frequenting many of its paths on a fair number of occasions. I love Shipley Glen and here I was enjoying journeying it again, this time as part of my journey along the Yorkshire Heritage Way. 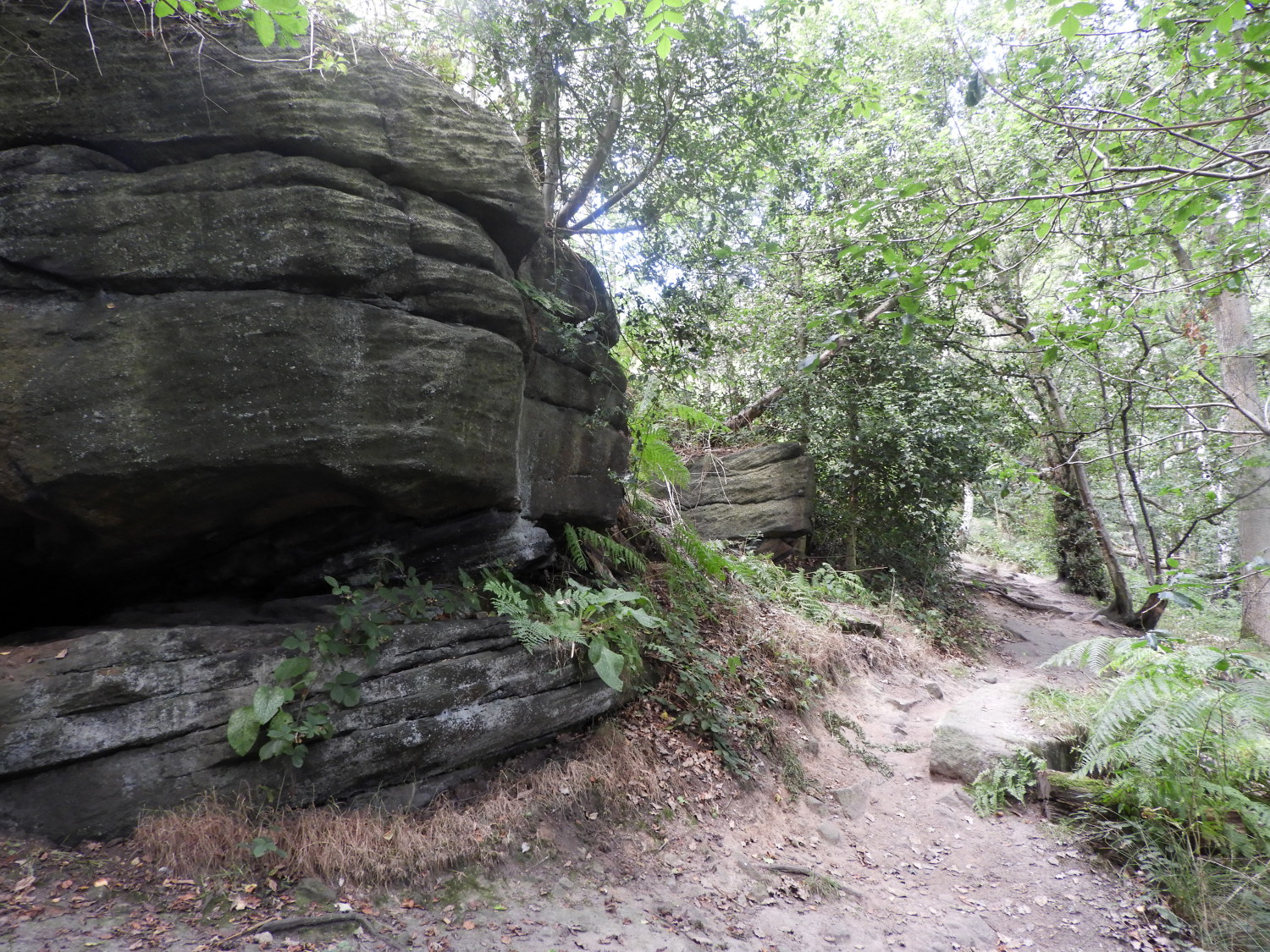 The high west side path through Shipley Glen 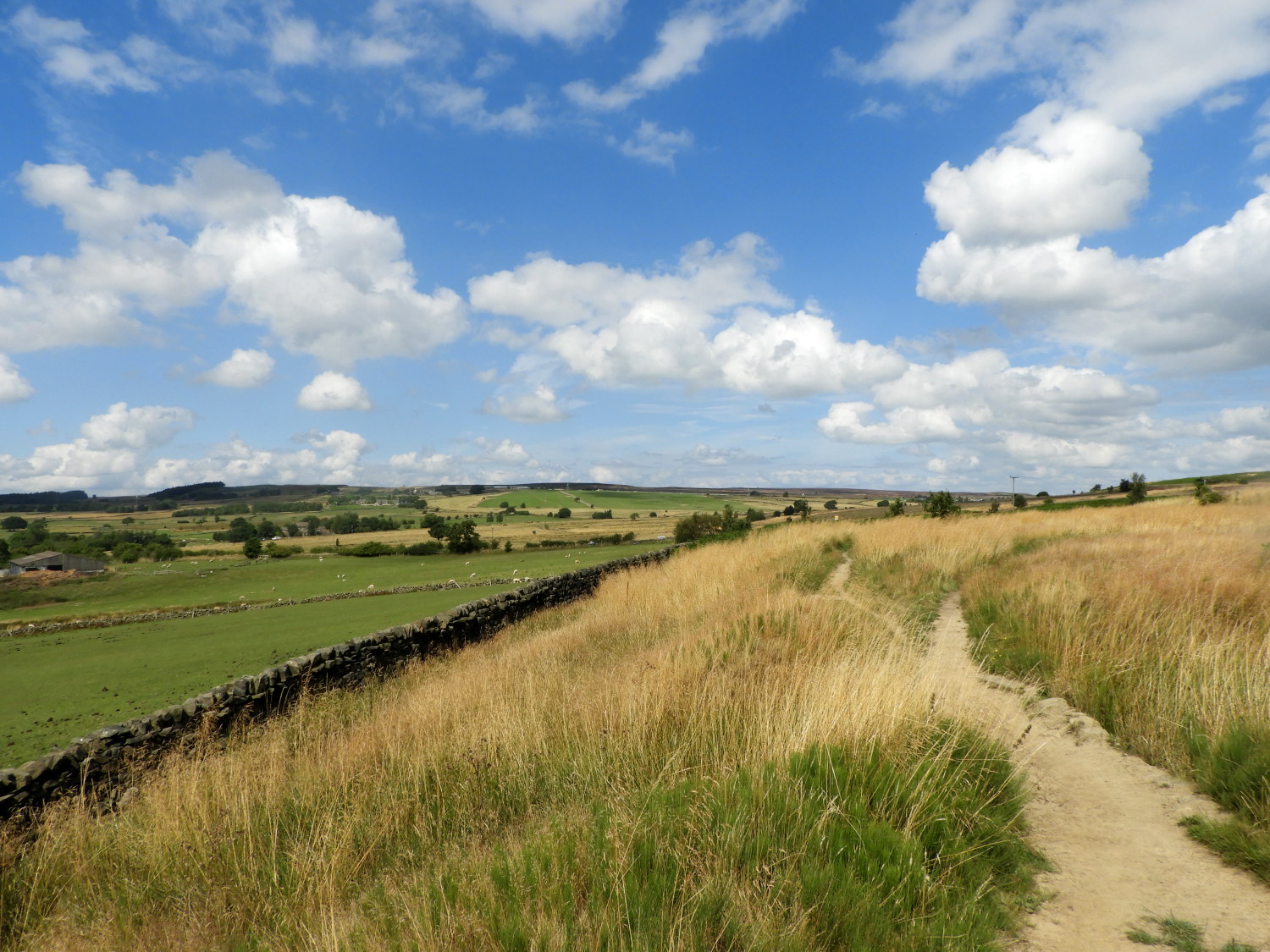 The western fringe of Baildon Moor

Before arriving at Shipley Glen the walk had been urban. After enjoying the walk through Shipley Glen I walked out into a landscape which was utterly rural. I had stepped out in the wild and breathtaking uplands at the south west edge of Baildon Moor with the moor rising to my right and the sublime pastoral farmlands north of Eldwick ahead of me and to my left. I suggest the option of climbing to the trig point of Baildon Moor and then tracking back to the Yorkshire Heritage Way via Sconce Lane as a worthwhile diversion to the route here - but as I have already explored the moor I stuck to the proper Yorkshire Heritage Way long distance path course, fringing the moor by walking northwards to Golcar Farm and then on to Birch Close Farm. 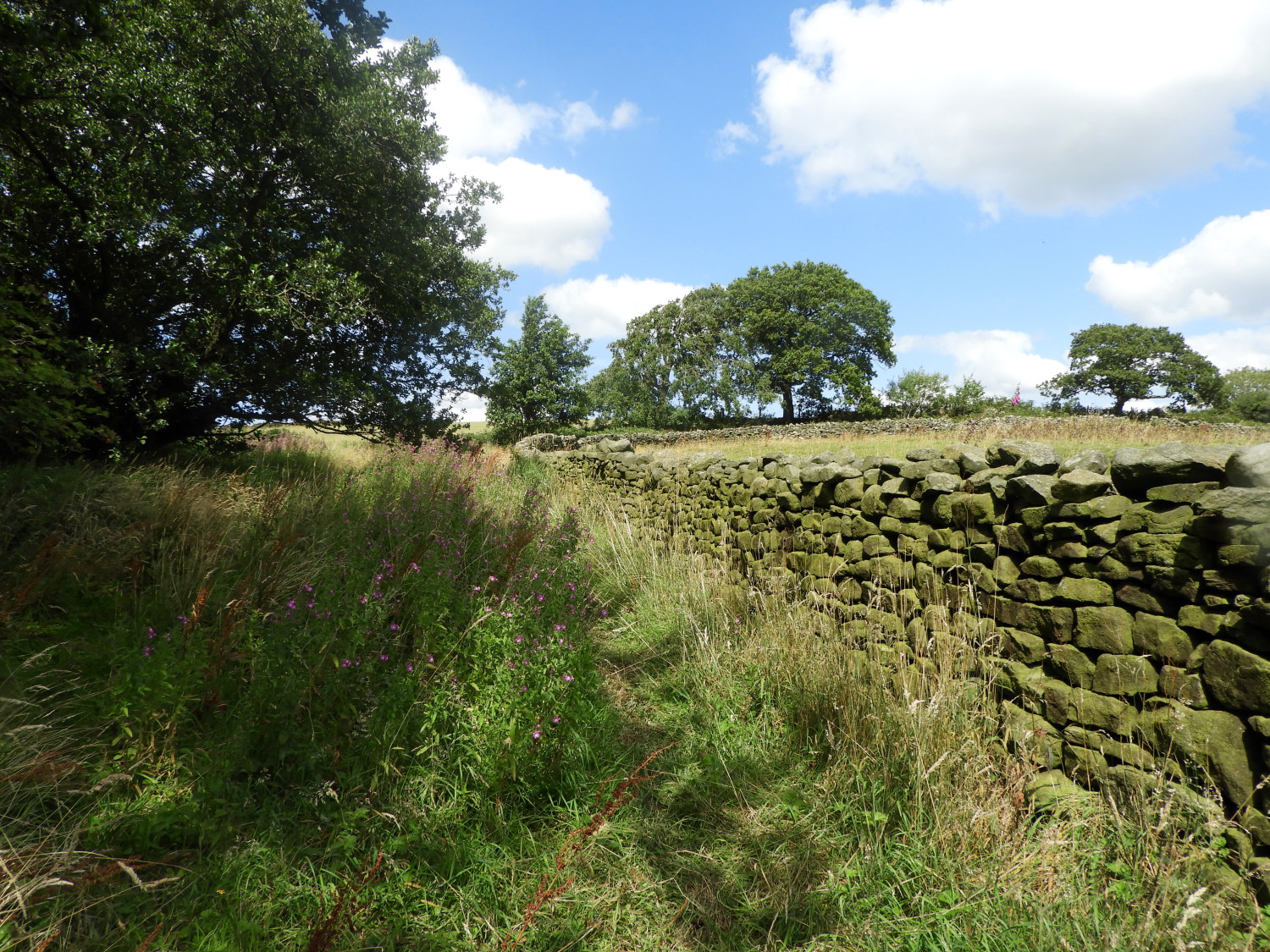 The path from Little London 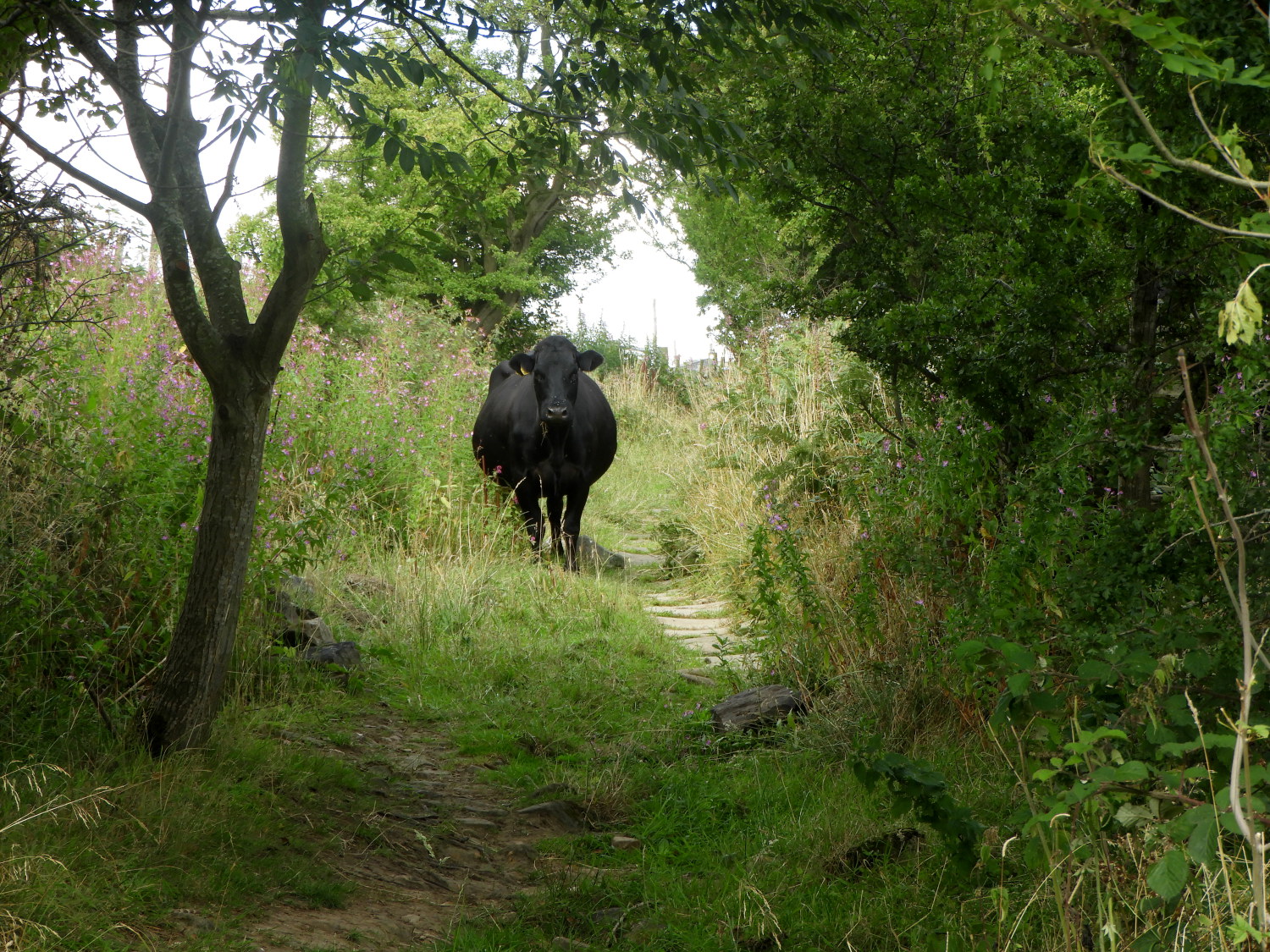 Beyond Birch Close Farm my next objective was the scattered hamlet of Little London, which is more a series of converted farm buildings than an established community. Very remote it is, a long walk to the nearest shop for milk and the morning newspapers. And most likely the ideal situation for those living the quiet life out here. Beyond Little London I walked the path on a narrow walled lane with fields on either side. These fields, just prior to reaching Old Wood Farm, were cow pastures. The bovine inhabitants of either field were settled and those nearest the wall looked over at me as I walked along with some interest. Then I discovered their peculiar attention as one of their group, from one of the fields left or right, I didn't know, had somehow got out of its field and stuck on the path. She saw me coming and having nowhere to go she turned tail and walked away, ahead of me, down the lane. Eventually she reached a point where she could go no further, gate ahead of her, gate to her left, gate to her right. I tried to calm her, edging to one gate and making my way to open it when she decided she could wait no more and therefore to bolt. She ran to the gate on the right hand side and leapt over it, bending the top bar of the gate as she hurdled over! WOW. I had always wondered how some farm gates got bent on the top. Now I knew. 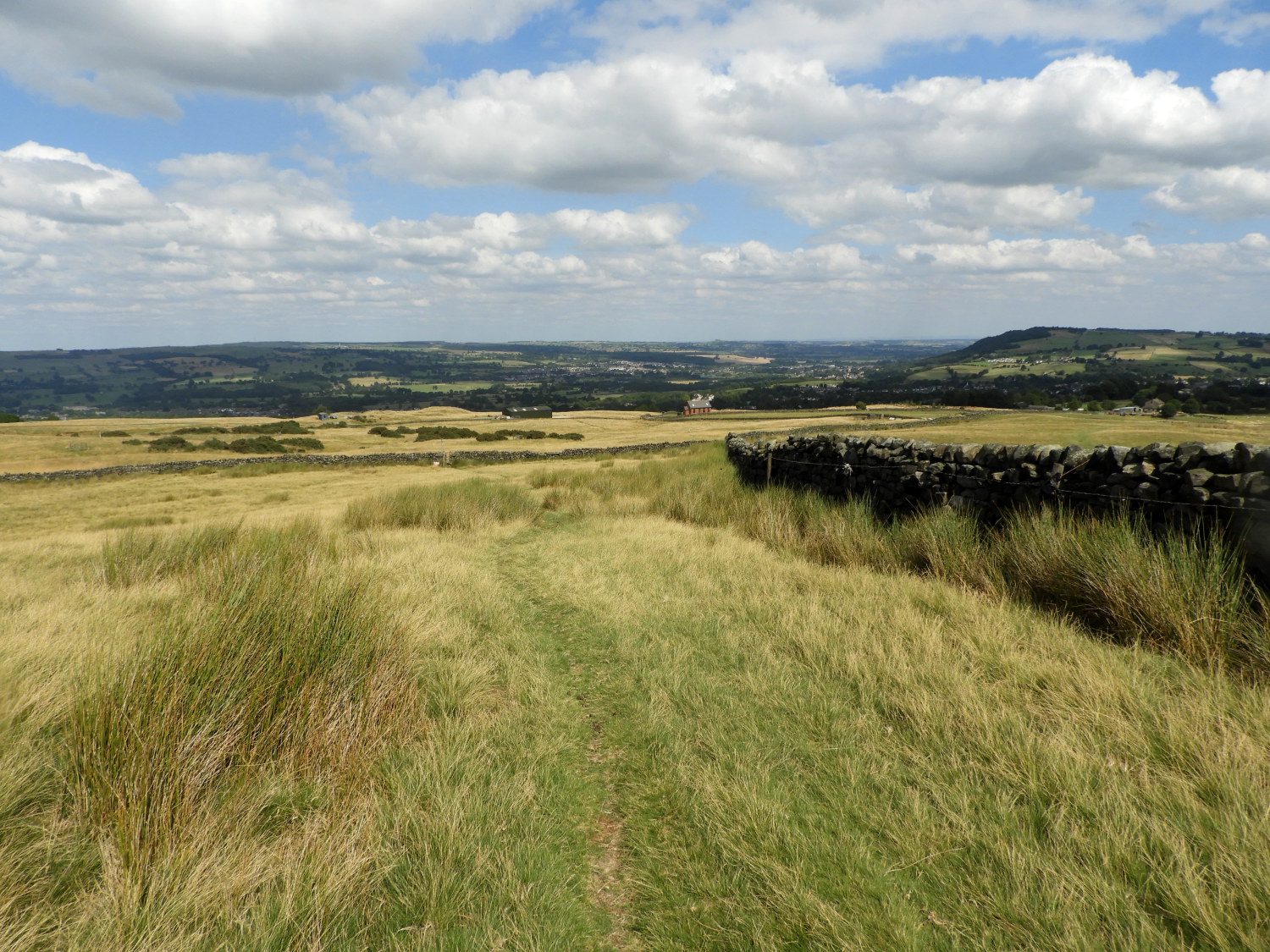 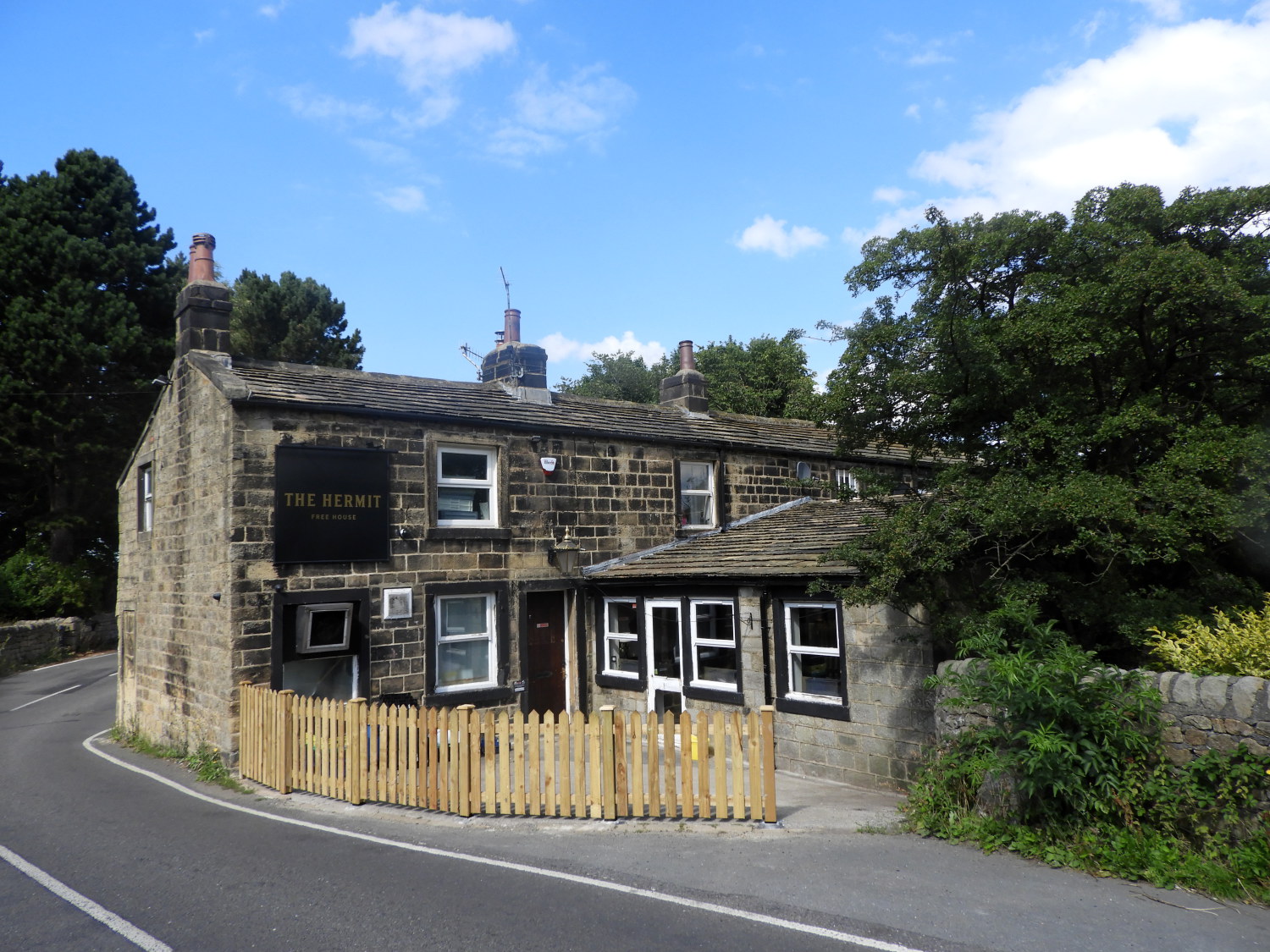 After the excitement of the cow who jumped over the moon gate I continued on past Birch Close Farm to arrive at the Keighley to Menston Road, turning right and following it a few metres before turning left at Intake Gate to climb the east edge of Hawksworth Moor. In doing so, continuing the long climb I had begun when leaving the side of the River Aire, I reached the high point of my day at a point adjacent to Reva Hill. Which I could see in the field just to my right. In all i had climbed a little over 200 metres in seven kilometres of walking. It had been barely noticeable, this last part from Intake Lane the only discerning ascent at all. Now I would lose all of that 200 metre and a bit gain a lot quicker. In just half the distance, first by descending from the moor to Burley Woodhead, a hamlet which is no more than a row of terraced cottages with a pub detached from the terrace at one end. Significantly the pub is the Hermit Inn, a famous walkers watering hole. Not for me today though, I kept going, further descending towards the village of Burley in Wharfedale. 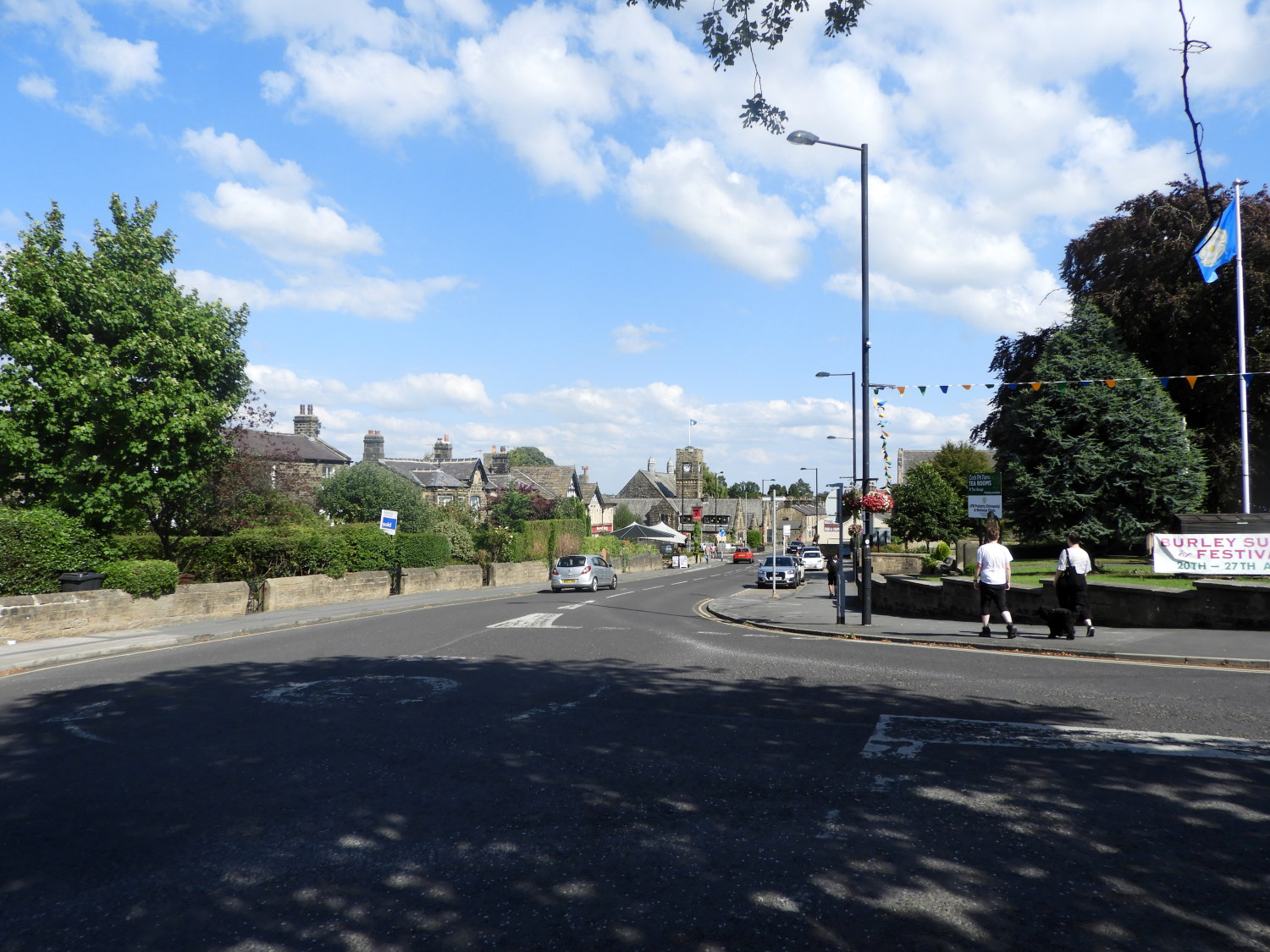 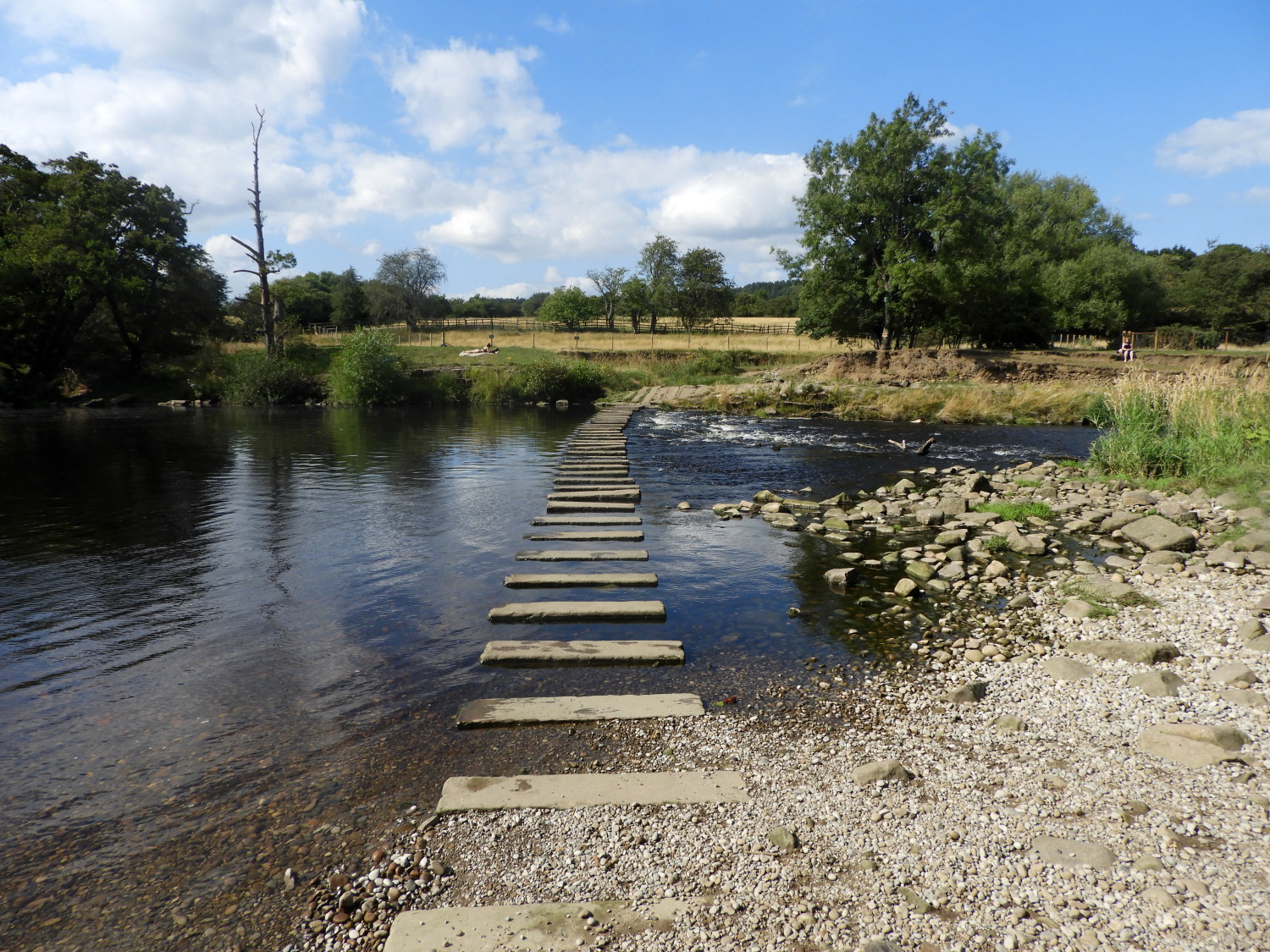 From Burley in Wharfedale, after a brief stop in the village for refreshments, I headed along the main street and then down Iron Row, passing through the bridge under the Otley to Ilkley bypass road to follow the lane past the old Greenholme Mills, now being converted to housing (2022), and down the lane to Burley in Wharfedale's stepping stones crossing of the River Wharfe. After a brief pause to take in the view across the stepping stones I went, successfully staying dry to reach the far northern bank of the river. 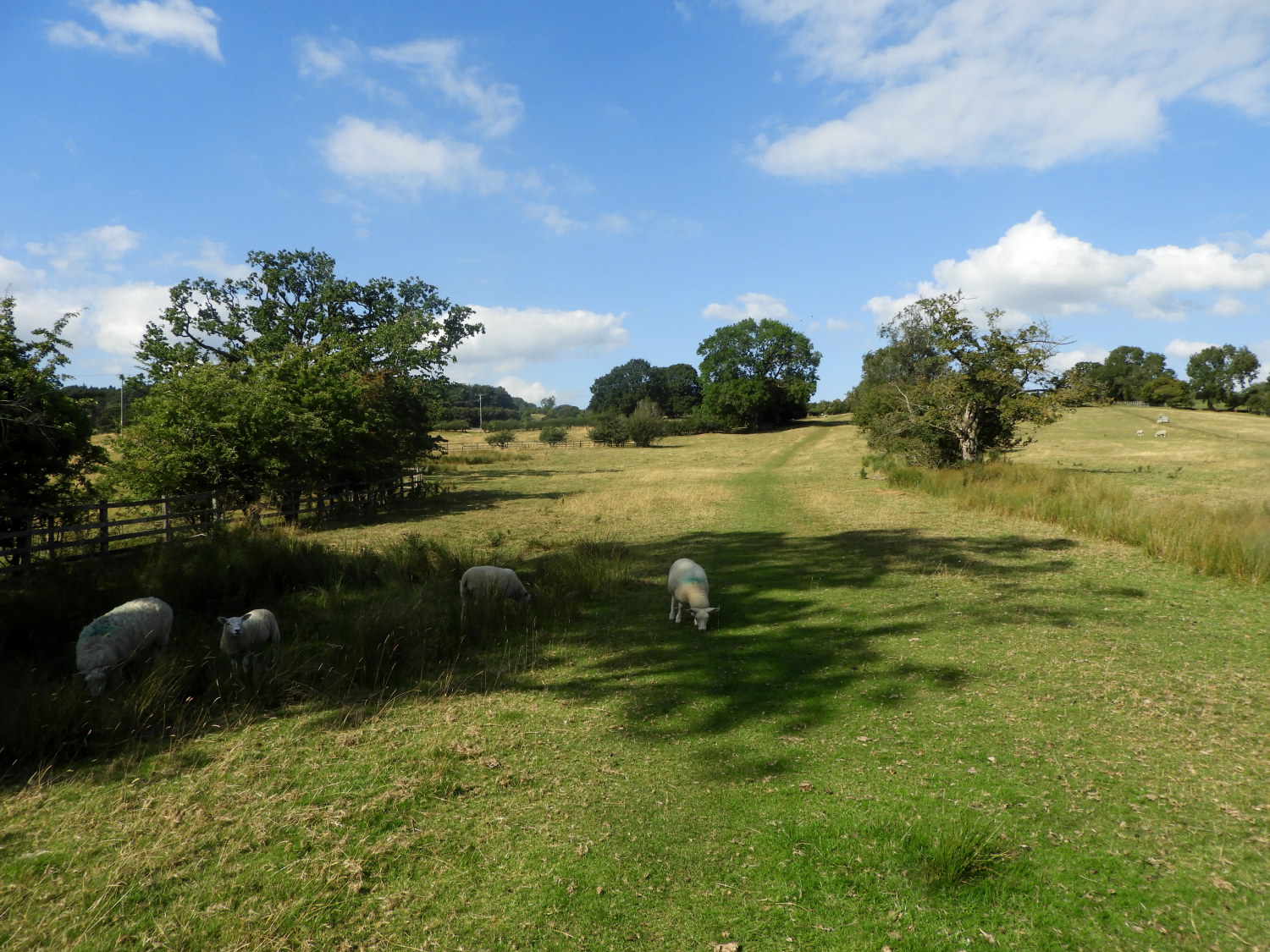 The path to Askwith 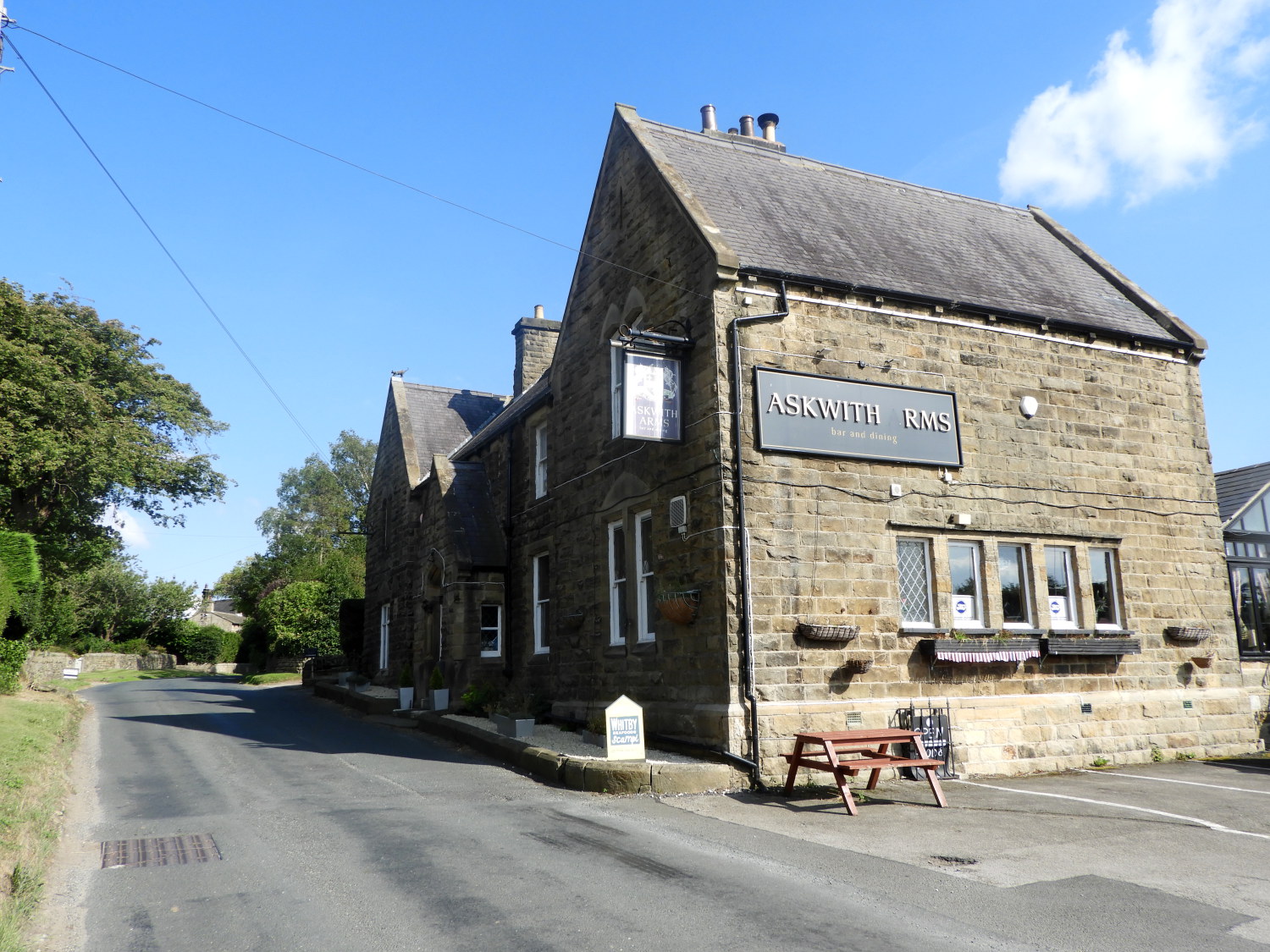 End of stage at the Askwith Arms

It had been a wonderful first stage of three on the Yorkshire Heritage Way, the final short stretch from the River Wharfe to the village of Askwith being a slight uphill climb of sixty metres which I did a little wearily, after fourteen miles on a hot summer's day. The sheep grazing in the fields on my way up to the finish beside the Askwith Arms public house. Again, no time for a pint, I was jiggered and ready for a sit down which was duly waiting for me in the pub car park. My wife Lil was waiting to transport me home for a clean up and my tea. Then I could celebrate with a drink which I duly did. In anticipation of the great middle day of the Yorkshire Heritage Way. It promised to be just as good and it really had started well. This had been a brilliant day.