Stage One: Hessle to South Cave

The 76 miles of the Yorkshire Wolds Way includes 40 miles of footpath and 16 miles of bridleway. The remaining 20 miles is either minor road, public path or byway open to all traffic. The idea for the Wolds Way came from the East Yorkshire and Derwent branch of the Ramblers Association. It became an official National Trail in 1982. 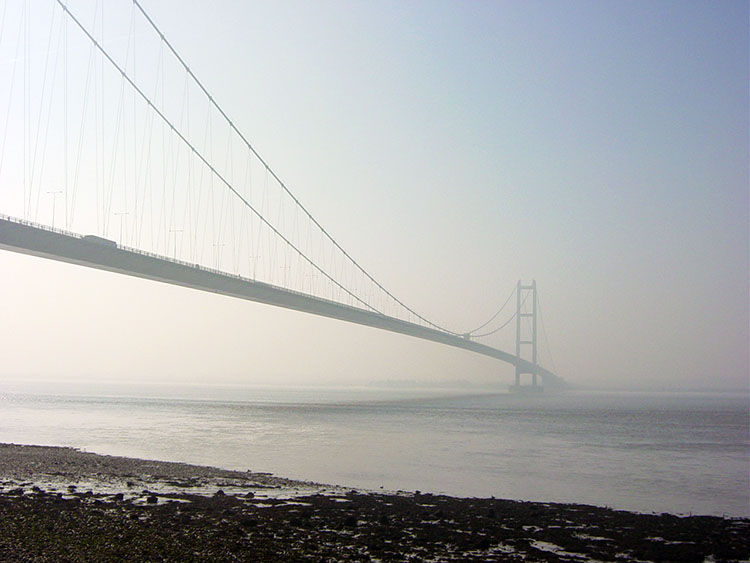 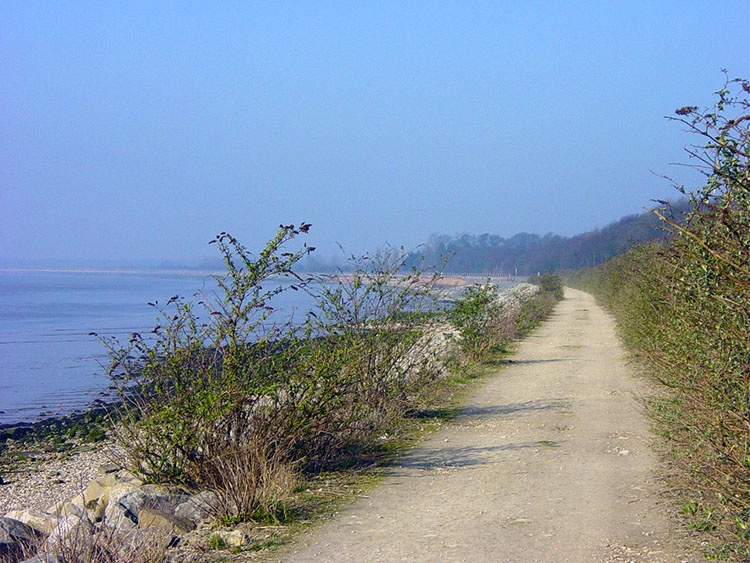 Beginning the Wolds Way beside the Humber Estuary

This section is a fairly easy going introduction to the Wolds Way. There is some climbing as every stage of the way crosses over rolling wolds landscape but you start today by walking on the flat for some time before heading into the hills. The first 2.5 miles of the Wolds Way from its start at Hessle Haven are done walking alongside the banks of the Humber as it stretches upstream inland to its source, the confluence of the River Ouse and River Trent, seven miles further on from where the Wolds Way leaves it at North Ferriby. 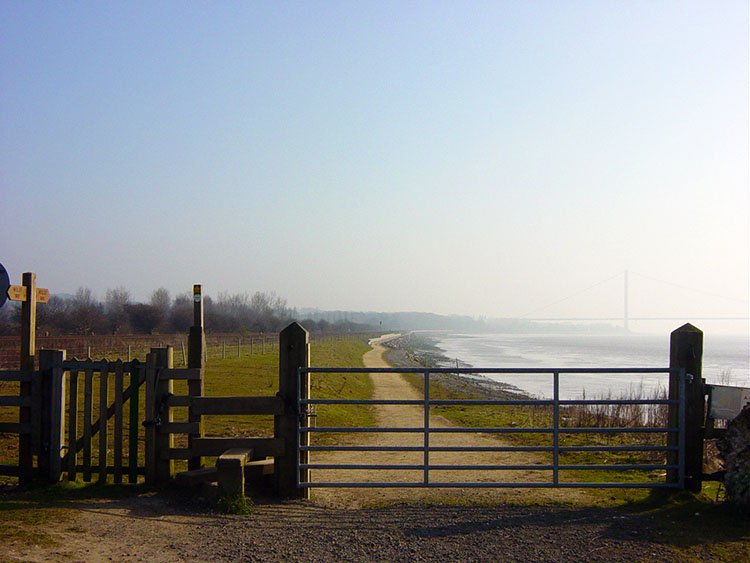 Leaving the Humber near North Ferriby 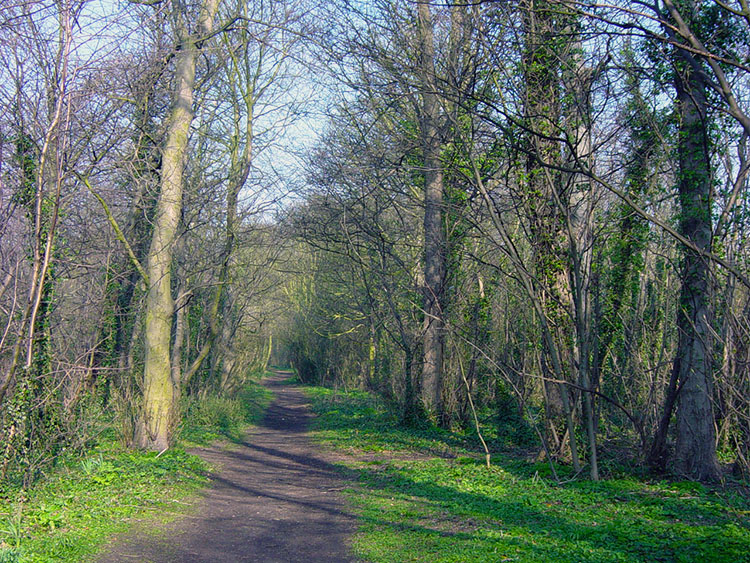 Enjoy this first three miles and gaze across the wide expanse of the Humber to its southern bank almost two miles away that make the river appear more like a sea channel than a river, especially on a misty day. These three miles are spent relaxingly and on level ground before you turn inland and head north gently climbing through sections of urban and rural terrain towards Welton. 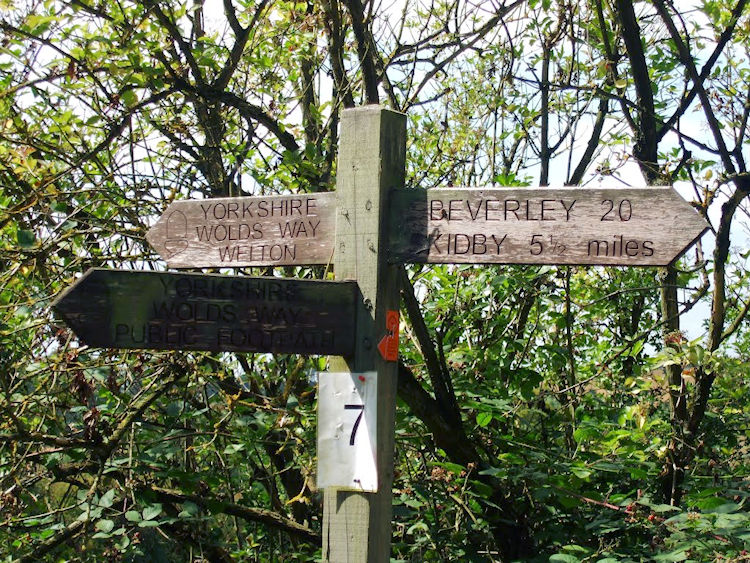 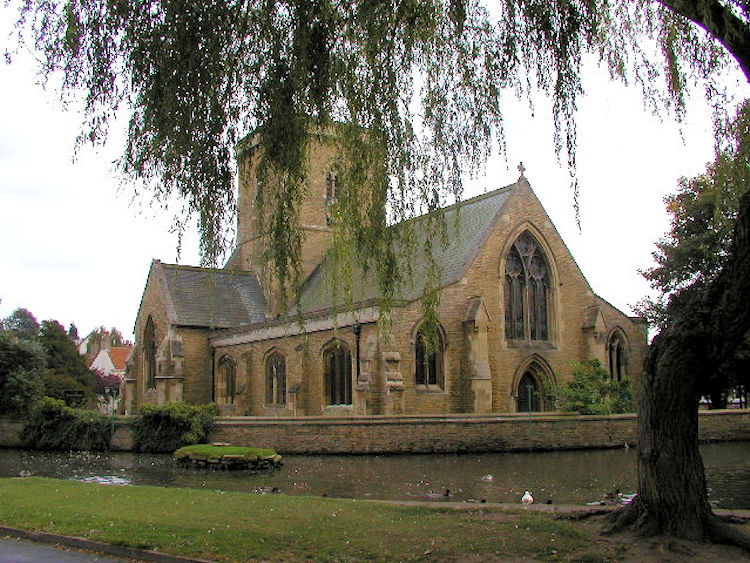 The village of Welton is reached by walking through three wooded plantations, Long Plantation, Terrace Plantation and Bow Plantation that are separated by the footbridge crossing of the A63 at Melton which is the extension of the M62 through the city of Hull to the docks and ferry ports. The woods are enchanting to walk through and a quiet sanctuary from the bustle of the motorway and city that surround them. Terrace Plantation is the part of the Wolds Way where the first climb is made, up to the heady height of 70 metres. Bow Plantation also has a stiff little climb as an introduction to it. This plantation leads you to the fringes of Welton. A short detour into the village is recommended. When in Welton visit the church and quaint mill pond (see Welton Walk) and if you have the time or thirst call into the Green Dragon Inn, a lovely quiet village pub with an infamous past for it was here that the highwayman Dick Turpin was captured. 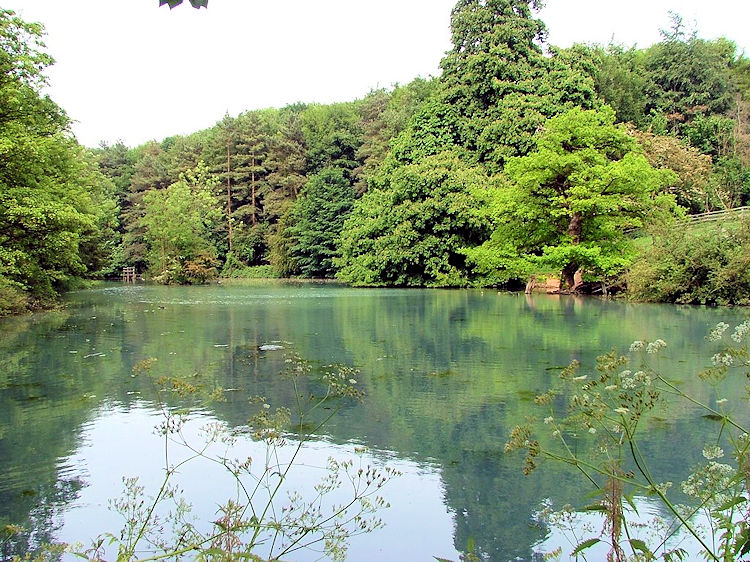 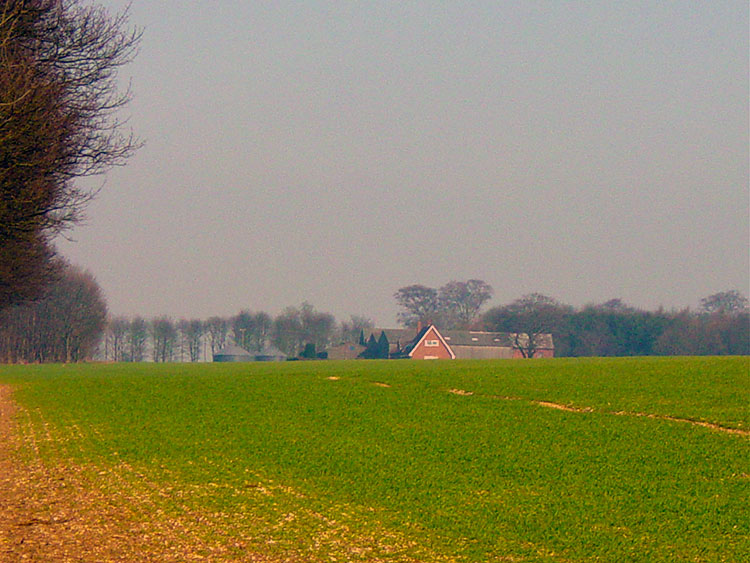 Onto the Wolds after leaving Welton

From Welton to Brantingham you begin to walk over the undulating land that is such a feature of the Wolds and it is on this stretch that they really begin. Walk from Welton to the delightful setting of Welton Mill Pond and then continue across the developing and typical rolling Wolds landscape and through the lovely dales of Welton and Elloughton (see Brantingham Walk) to the fringes of Brantingham village. 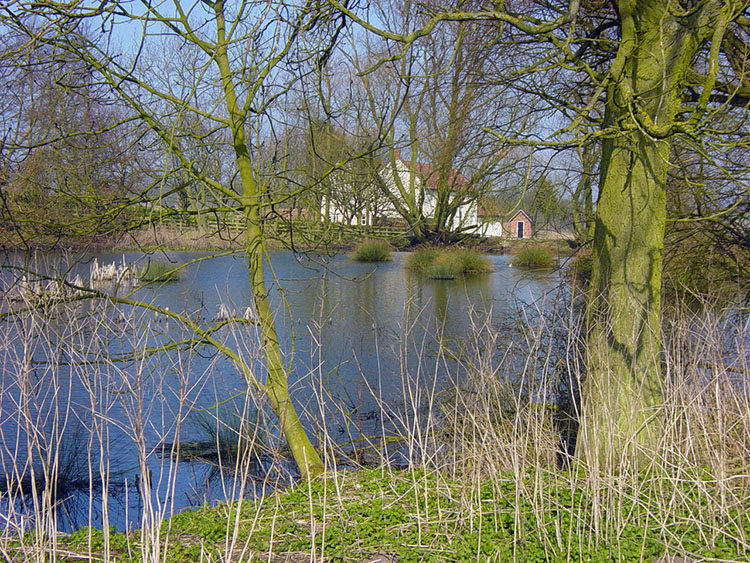 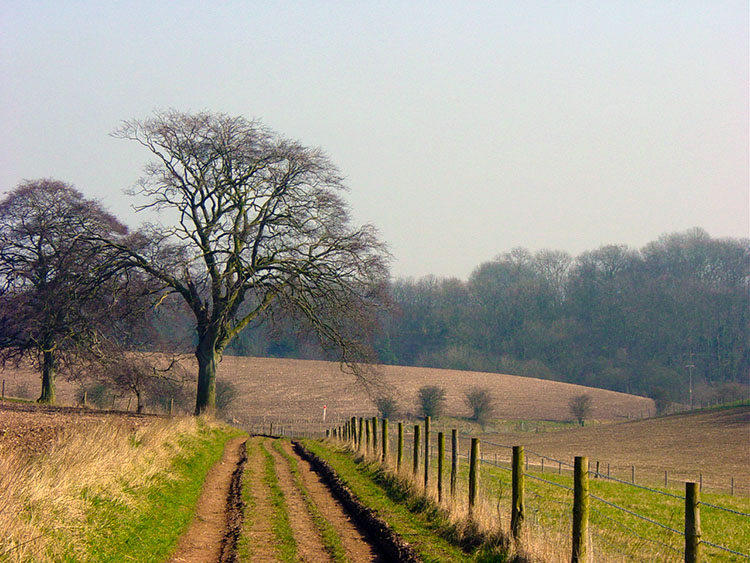 The section of walking between Welton and Brantingham allows you to quickly forget the urbanisation left behind in the outskirts of west Hull. Hessle and North Ferriby become distant memories as the first sights of chalkland reveal themselves. It is gorgeous and an inviting prelude to the walking lying ahead. 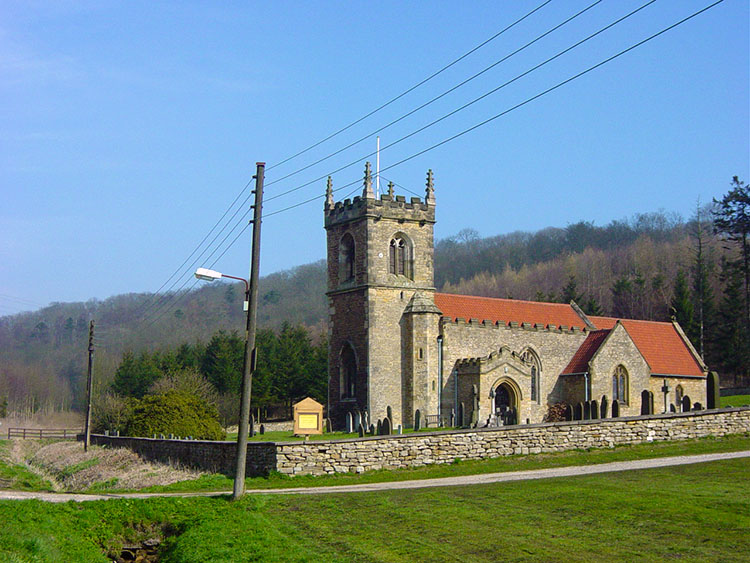 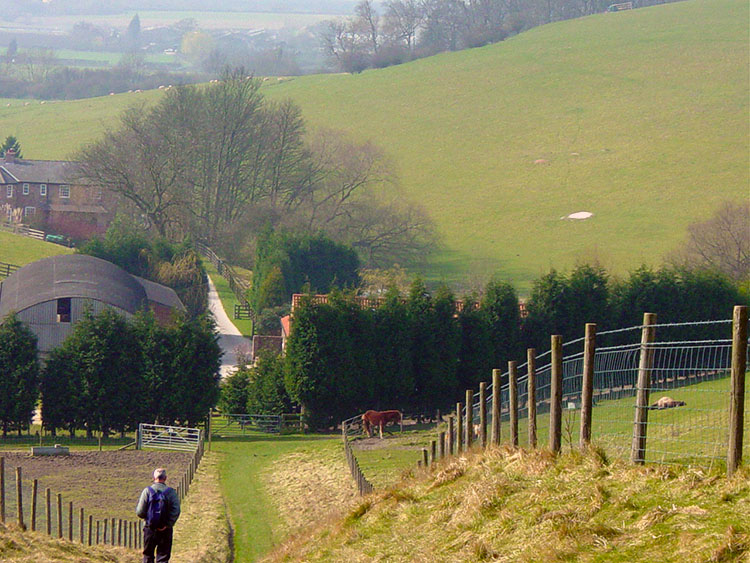 The final part of this first stage is confirmation that the Wolds Way is going to be a great walking experience. Although the walk does not have the steep climbs and heady heights of the Coast to Coast, a Lakeland walk, or even the Cornish Coastal Path, it does present some short stiff climbs that will help any walker to get fit. The first of these is the climb out of Brantingham at 40 metres high to the top of Ellerker North Wold at 140 metres. The views from the top of the wold are lovely and on a clear day you can see all the way over the plains of the county to industrial South Yorkshire. From Ellerker the way drops to Woodale Farm and then into Woo Dale, another picturesque spot. 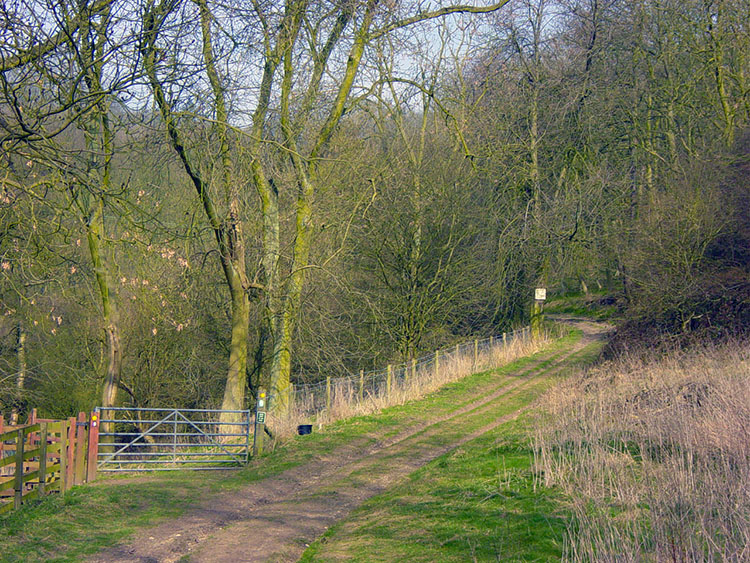 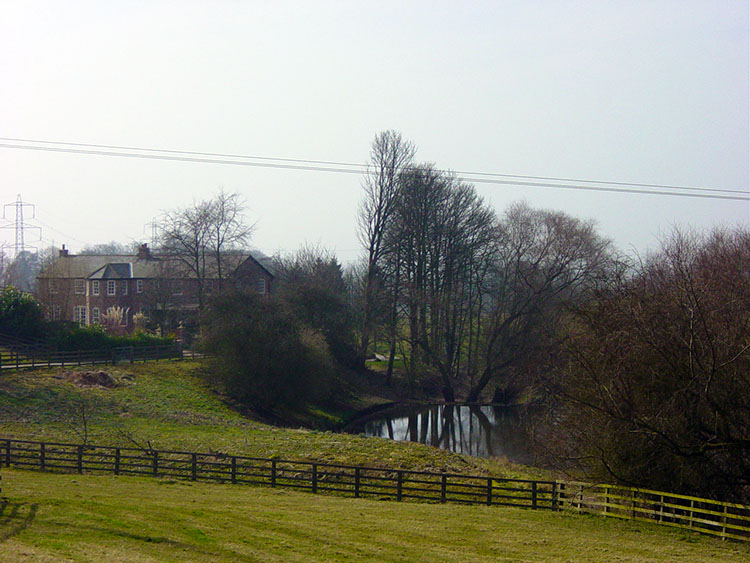 Woo Dale became one of my favourite places when I was exploring the Yorkshire Wolds during my time living in Beverley. It is a lovely place, much loved by Hull people who make it a busy place on the best of summer days. As it was early Spring I had it to myself... almost. There were one or two walkers enjoying the surrounding along with me. Leaving woo Dale gives you another lung freshening quick haul up to Mount Airey Farm. From the farm it is a straight forward drop down off Great Wold Side to the fringe of South Cave. 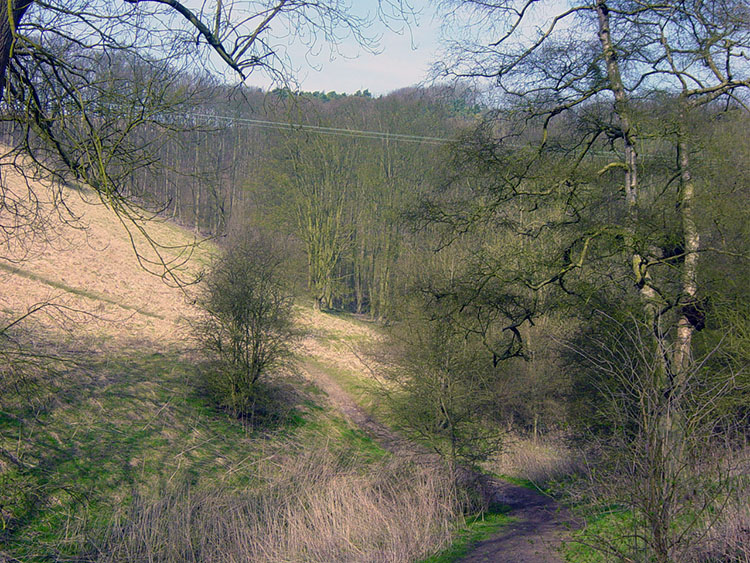 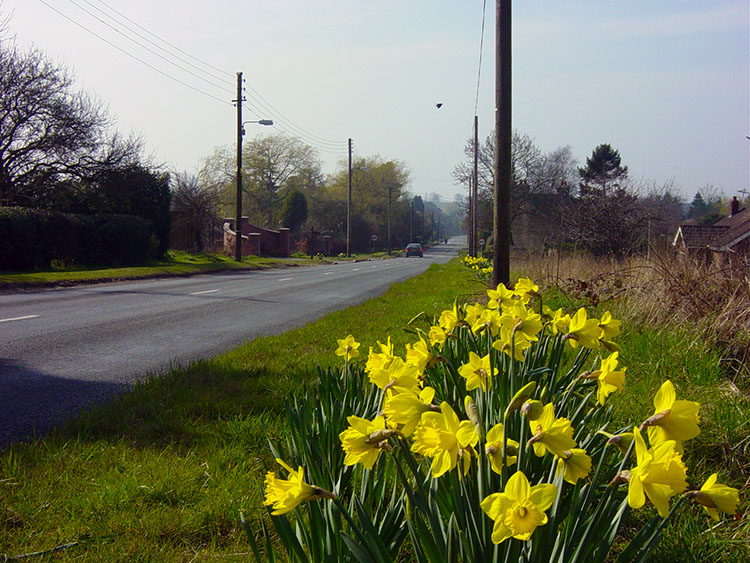 Detour from the walk into South Cave. This is the ideal spot to finish the first stage of the Wolds Way. South Cave is one of the few places of any decent size on the route and has plenty of choices of accommodation. Myself, I awaited my pick-up and reflected on a super days walking. I am so glad I decided to do the Wolds Way. There is climbing to be done and sights to see. I have seen lots of beauty spots already and look forward to the next stage.