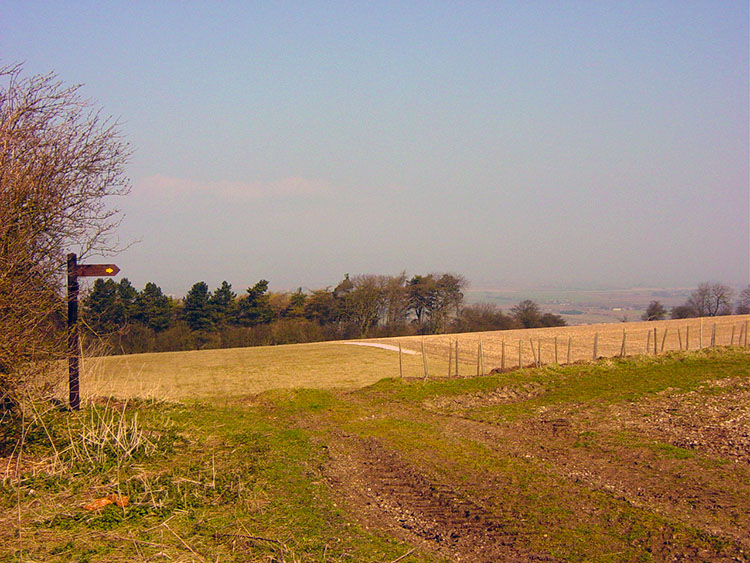 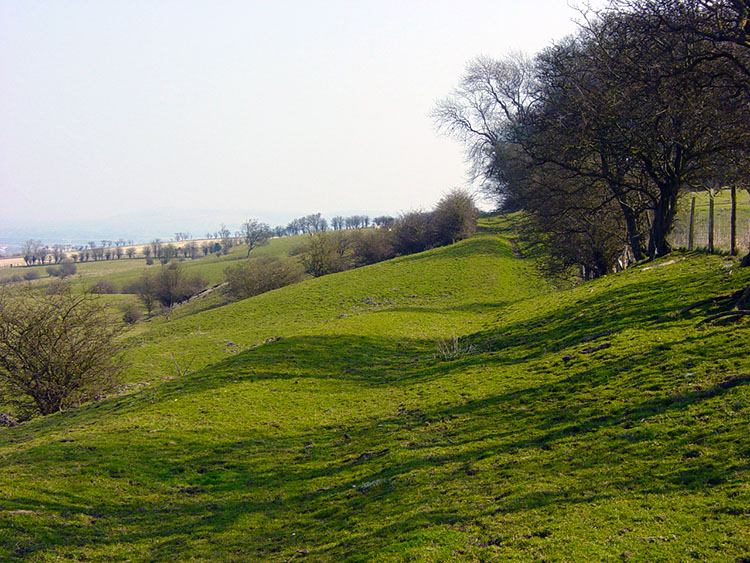 The final stage of the Wolds Way is spent almost entirely at height as you follow the edge of the Wolds escarpment from West Heslerton to the coast. My final day started at West Heslerton Brow and as before on this eerie spring I was bathed in sunshine. The first five miles are walked in parallel to the A64 trunk road that can be seen in the distance below the walker to their left. 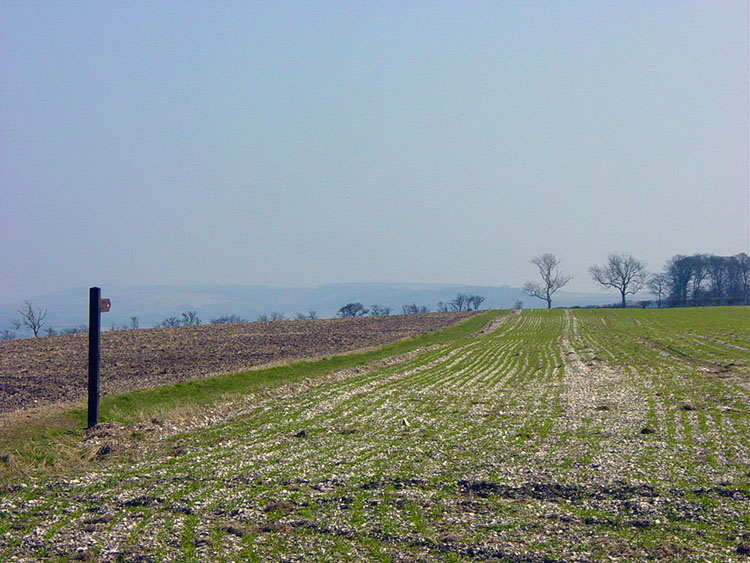 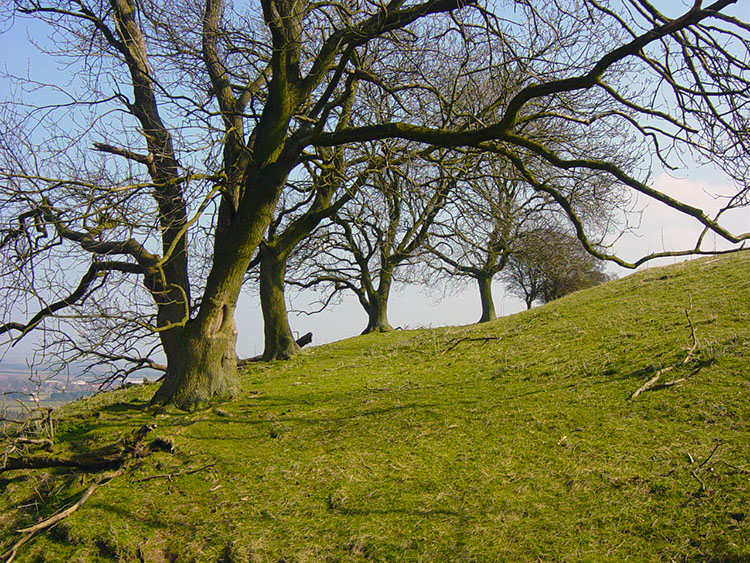 The road is vital to the east coast economy as it is the feeder from industrial West Yorkshire. I have travelled it many times myself from Leeds to the coast although I am much happier now I am walking to the coast, and surely doing the healthier option. Good long distance views are afforded me as I look north from the fringe of the scarp face to the North Yorks Moors that hold my memories of another long distance walk, the Coast to Coast. 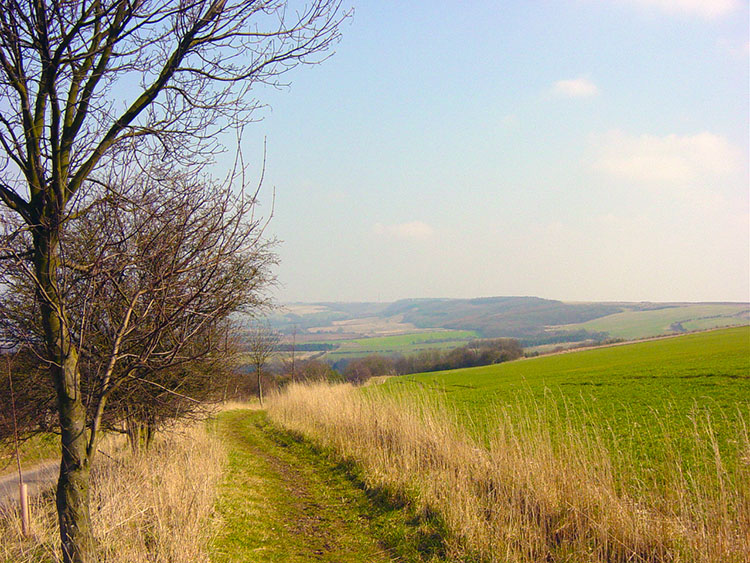 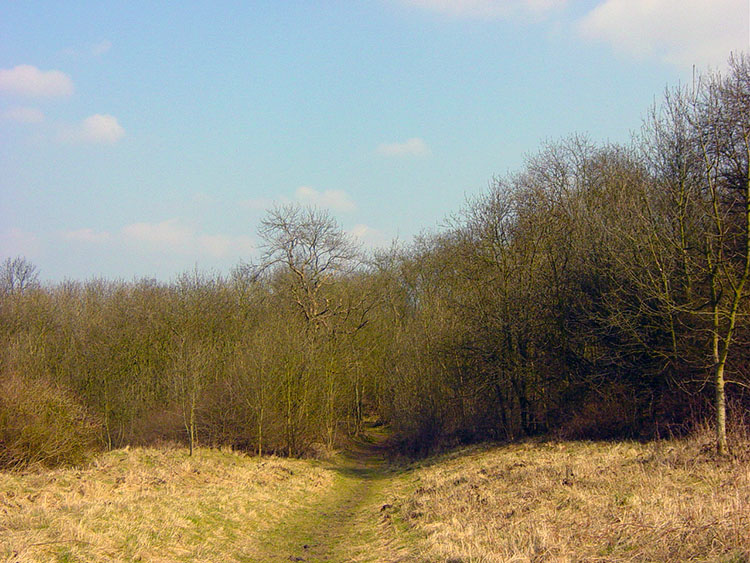 Along this early section there are some exceptionally beautiful interludes, particularly the walks through East Heslerton Brow , Sherburn Brow, the Ganton Hall estate and the guard of honour walk through Binnington Brow. After Binnington Brow you leave the scarp face and head back into wolds landscape at Staxton Brow. 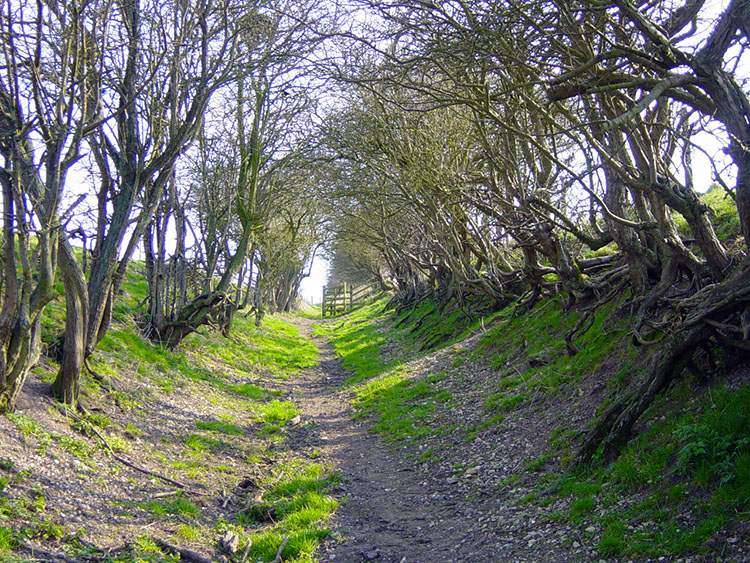 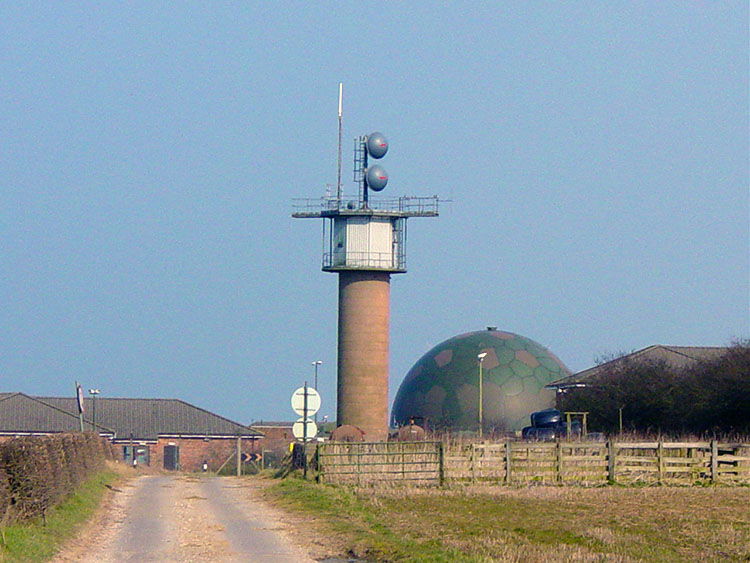 There is a lovely section of Holloway to follow at Staxton Brow which is unusually in this landscape which is scarce of trees, small woods and managed plantations excepted. One word of note I have just recalled. no one should get lost on the Wolds Way because this is the best signposted national trial I have yet followed. Reach another waypost and head towards the radio mast at the RAF station near Staxton Wold. 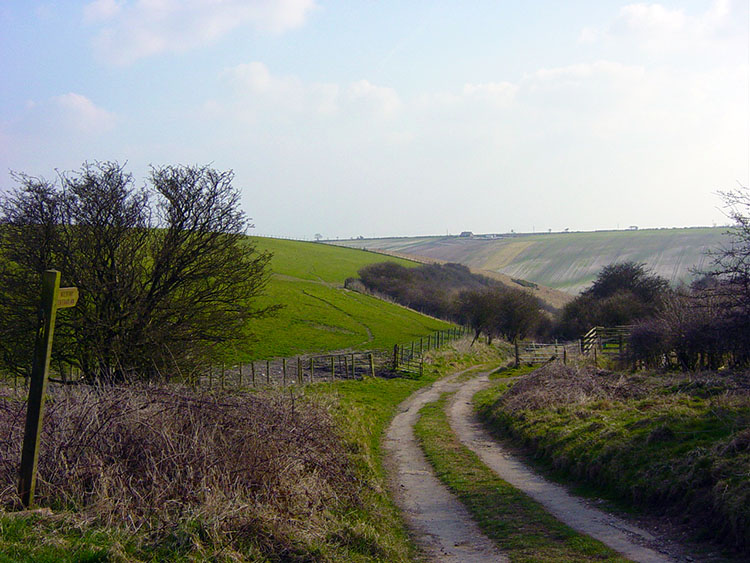 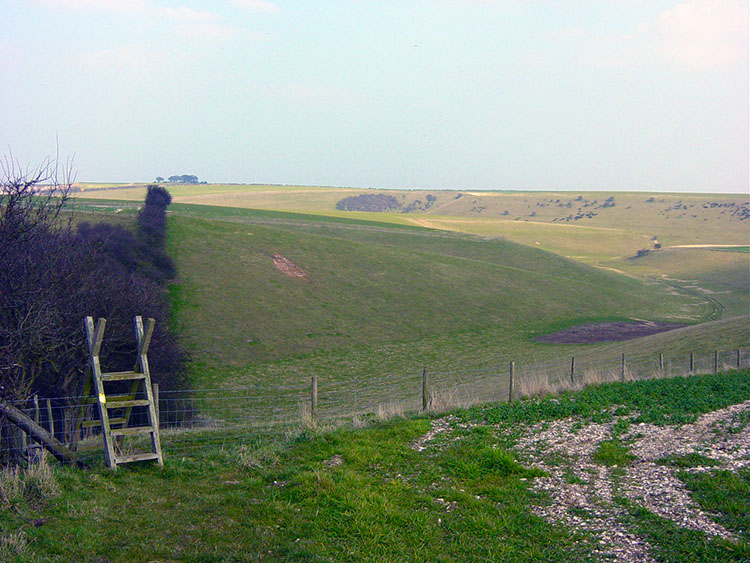 Before dropping too deeply from the RAF Station into Staxton Wold turn left and head across open land to Flixton Wold and then Folkton Wold which surrounds the final two dales to be encountered on the walk which are Camp Dale and Stocking Dale. 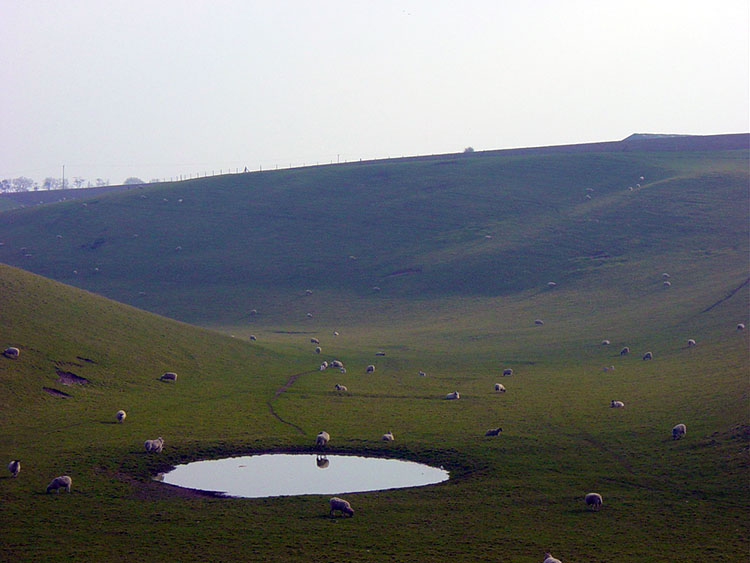 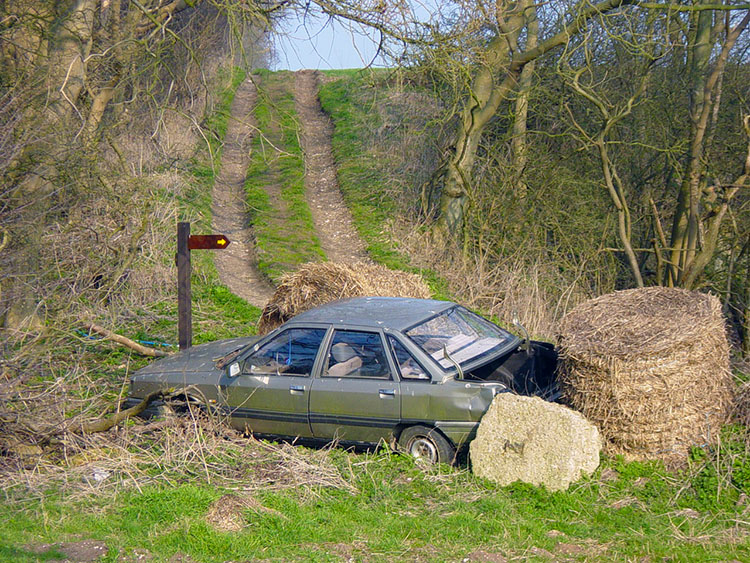 Camp Dale and Stocking Dale had varying features of the landscape to show me before I left the dales of the Yorkshire Wolds behind. First Camp Dale provided me with a fine example of a Dew Pond, entirely man-made by puddling clay to retain any water collected by rain and overnight dew. A much appreciated drink for the sheep surrounding the pool. Stocking Dale had a abandoned car falling to pieces. Why would an idle farmer not take it to the scrapyard? 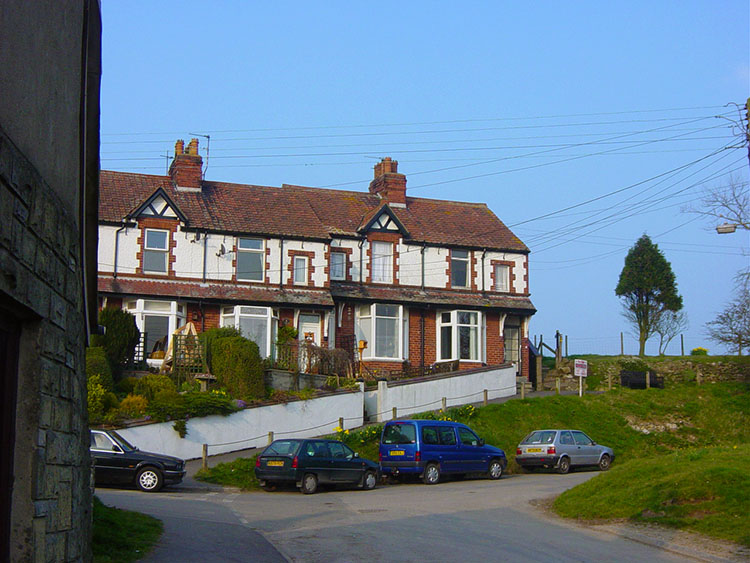 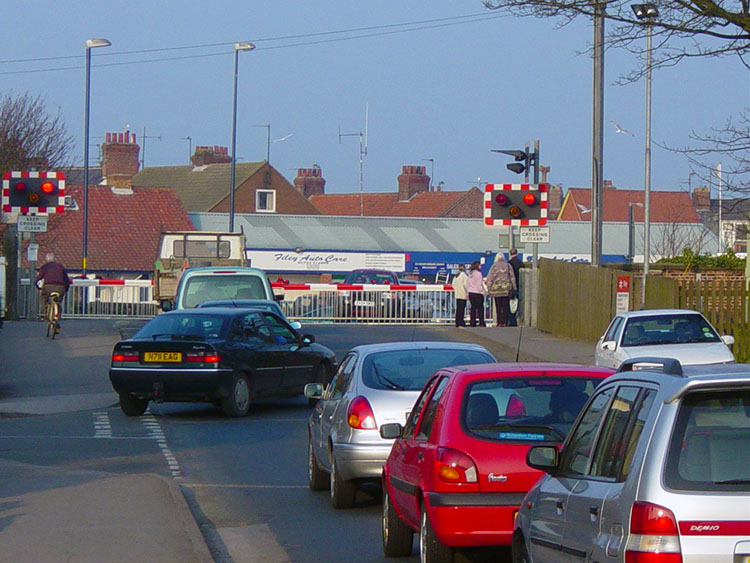 Stopped by the train in Filey

Enjoy the walking around these dales and say goodbye to wolds countryside as the walk all too quickly heads towards its conclusion. After a few more fields the village of Muston is reached. Follow the road through the village and then cut across one more field then walk though another final field fringing a school. At the end of the field cross a stile and follow a path to the main road. You are now in Filey and after following the road over a railway crossing into town you face a short walk through quiet streets to the coastline. Follow the coastline to the Brigg a natural cliff outcrop that juts into the North Sea. The walk officially continues for another mile further along the Cleveland Way to Scarborough so take in the Brigg and move on the conclusion of the Wolds Way. Well done. 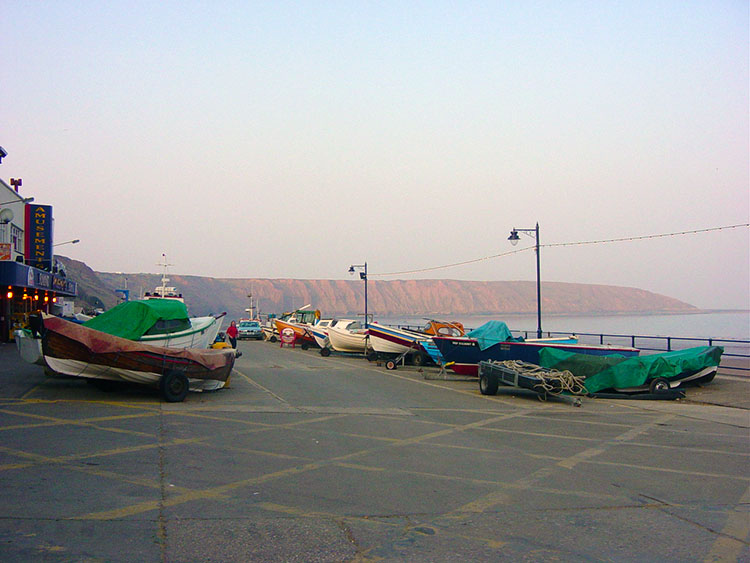 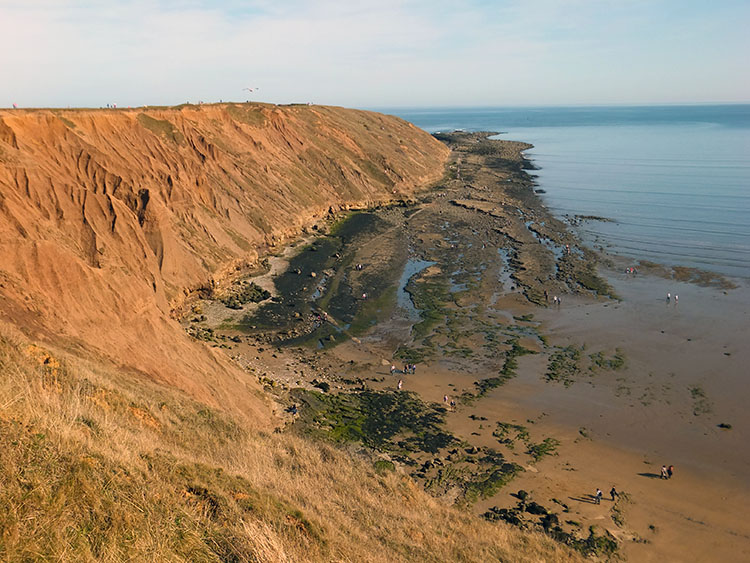 In conclusion what can I say about my Wolds Way. First of all it was walked in magnificent conditions throughout and not once did I have to divert my path because of mud, water logging or flood, and yet I did the walk in Spring. I kept my boots remarkably clean. It was a great walk and I enjoyed lots of great times in lovely quiet dales. I passed through a good number of woods and plantations. I walked through or on the fringes of lots of quaint wolds villages and I even spent a few enjoyable moments in the deserted village of Wharram Percy. I saw plenty of wild life, particularly birds, deer and mad March Hares! It was a lovely exhilarating walk. I am glad to say I have done the Wolds Way. I was critical of the walk before I did it but now I have walked it in its entirety I can justifiably say that it fully deserves the distinction of being a recognised National Trail.