A personal record of my walk of the Thames Path National Trail with a written journal and with photographs. Tracklogs for GPS units and for use with Google Earth are available for download for each stage.

I had been looking forward to walking the Thames Path for a couple of years, being delayed by the health restrictions of the time. But finally, in late August 2021 I was finally here. My first delight of the walk was a surprise before I even got to the start of the National Trail. After embarking from the train at Kemble and walking out of the railway station I was greeted with a "Hello Mike". Looking around I saw someone I had never met before but it was a face I recognised from social media interactions. Rob Potterton had detoured from a work commitment to join me for the first couple of miles of the walk. I had first corresponded with Rob when he asked my advice on long distance walking before he attempted and successfully completed the Pennine Way a couple of years earlier. We have remained friends since. Especially since I left him a pint of beer on top of Pen-y-ghent during his Pennine Way walk. He returned the favour here. Arriving at Thames Head after the short walk from the railway station he took a couple of bottles of Budweiser from his backpack and after the obligatory tap of bottles we toasted the anticipated completion of my Thames Path walk. "Cheers Rob". 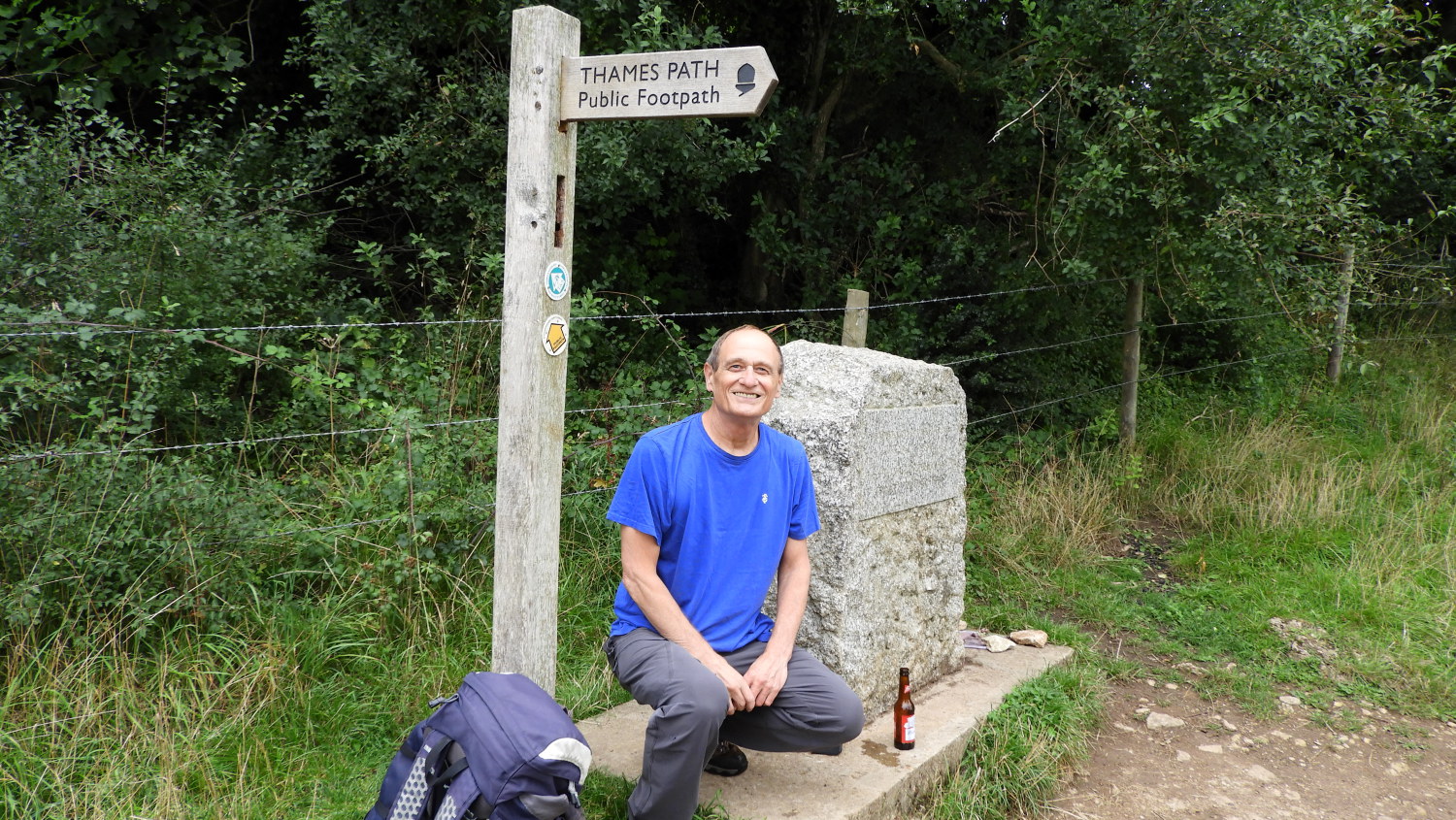 All set to go at Thames Head 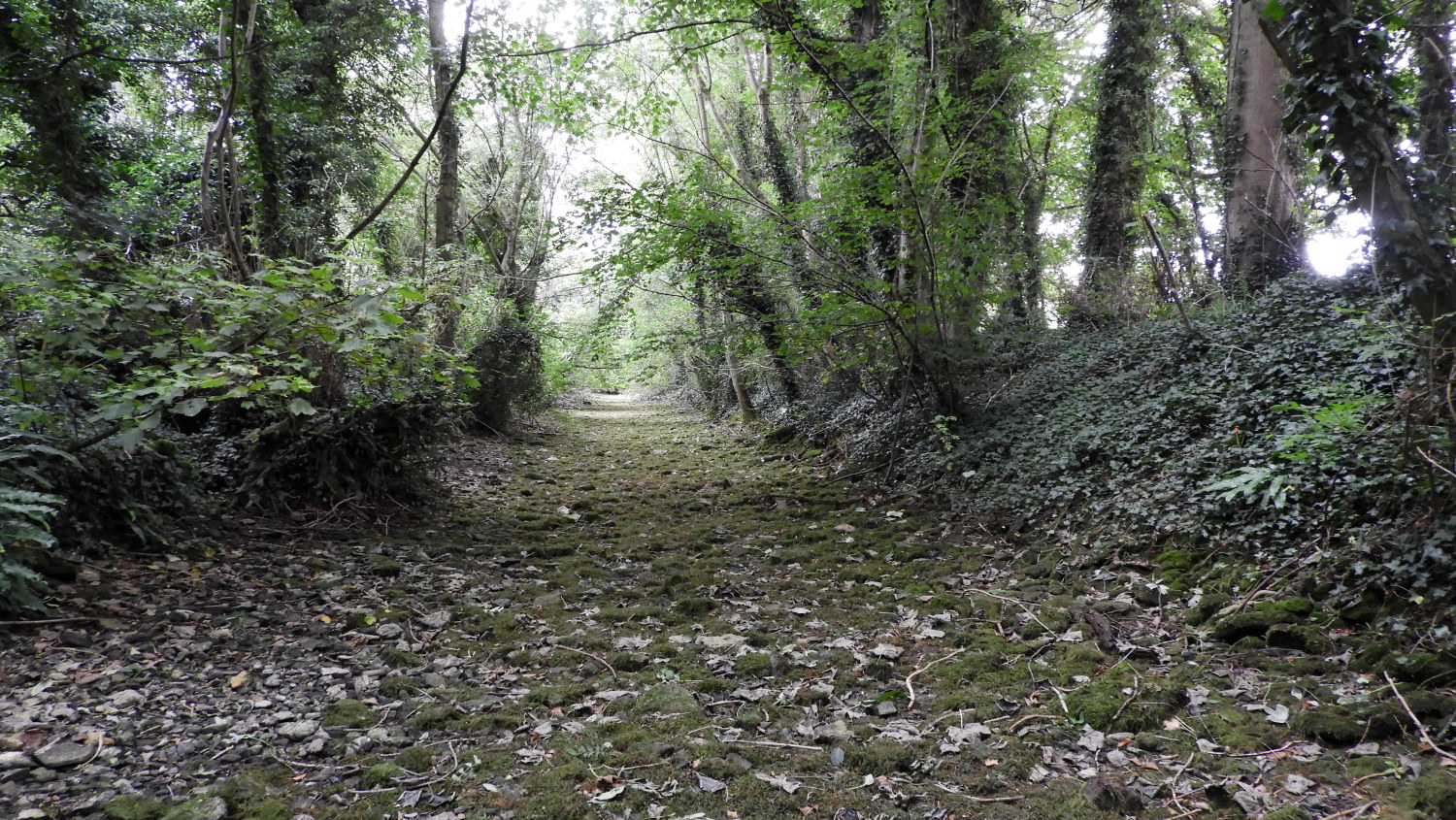 Dry riverbed of the Thames

Rob walked with me from Thames Head, marked with a stone pillar and indicating the way with the first waypost of the trail, for the first mile back to the meeting with the Wysis Way near Kemble. Unfortunately he did not get to see any water in the river, the bed being completely dry. A sign of modern times. Whether it is due to global warming, seasonal rainfall, extraction or whatever. The fact is that rivers in England dry up in summer and stay dry into autumn much more regularly than they did in our youths. I see it in the River Wharfe up in Langstrothdale every year now. Anyway, after Rob and I had shook hands to mutual farewells I continued on my way, seeing the riverbed of the Thames so dry near to Clayfurlong Farm that I was able to walk a stretch along the riverbed itself. That was quite surreal. 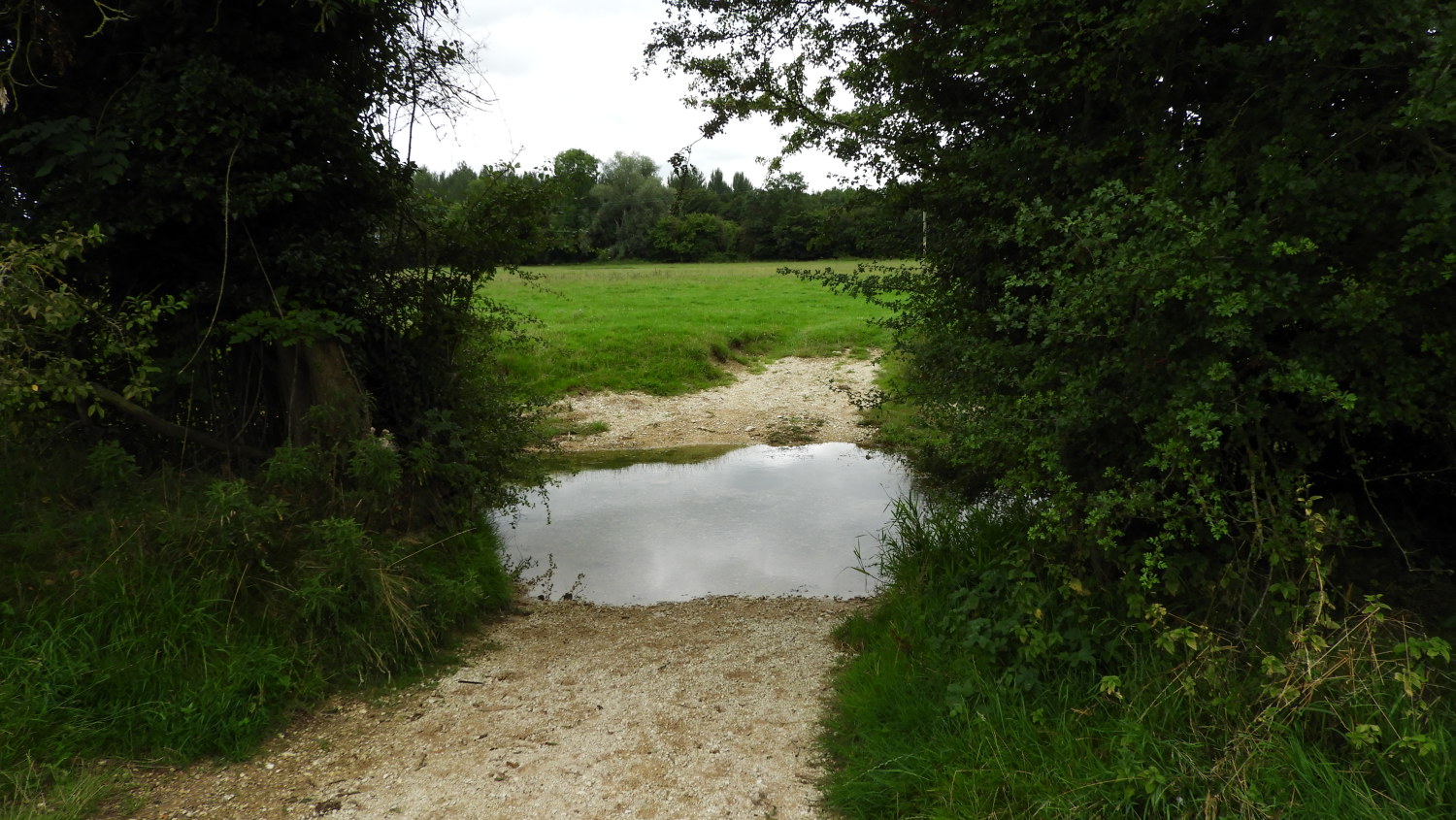 The Thames was just a puddle near Ewen

The next point of significance for me on the walk was Parker's Bridge. Here the Thames still failed to show me any running water but I was getting to see puddles in the river and with the damper conditions the riverbed was a lush green garden of pond weed, water loving long grasses and reeds. The foliage was nearly as high as the bridges arches. A lovely sight of late summer I thought. After Parker' Bridge I left the line of the fledgling river, following a direct line by roadside to the hamlet of Ewen. No more than a scattering of houses, in the midst of it I turned from the main road, walking due south and regaining the path of the river to cross fields edging the west side of Somerford Keynes, heading toward Neigh Bridge Country Park. One field was occupied by cows which kept a close eye on me. I made sure to keep a close eye on them too. 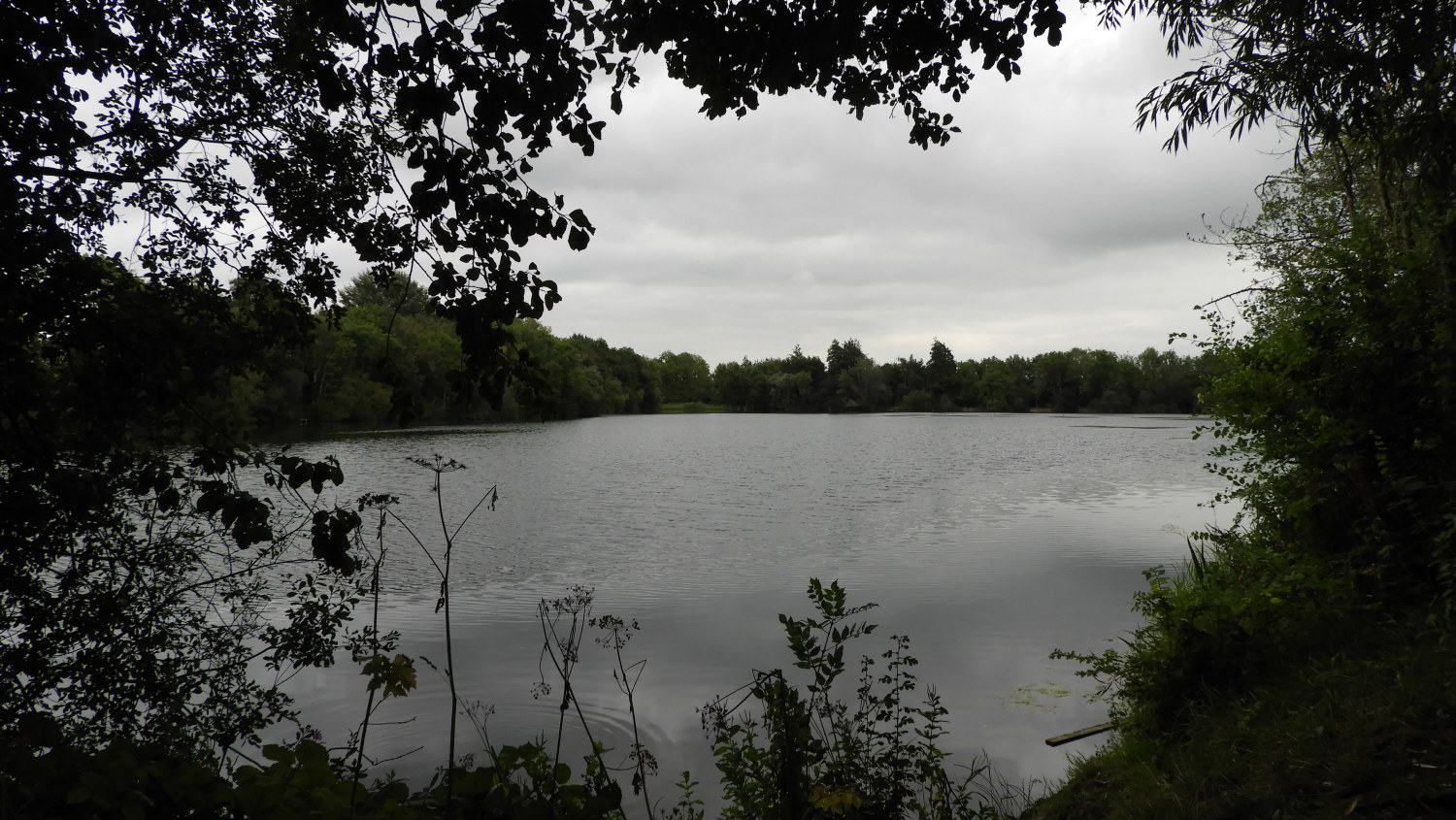 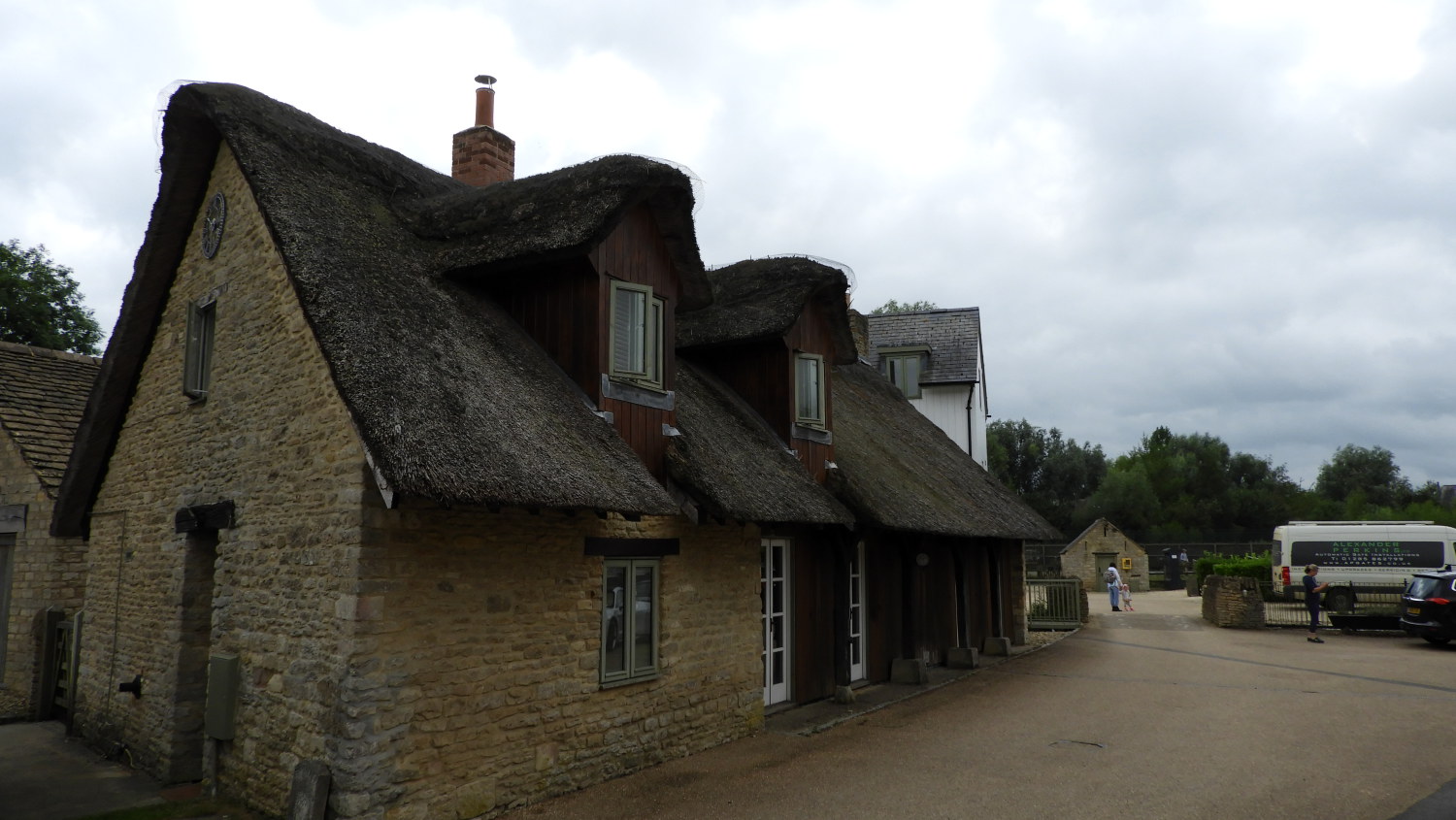 Before seeing a proper river I arrived at the first of a series of ponds and lakes which in the whole make up the Cotswold Water Park. In total the park is huge with around 180 lakes spread over 42 square miles and for most of the remainder of this first stage of the Thames Path National Trail I would be walking through the centre of it. Arriving at the Neigh Bridge Country Park section it became clear to me this is a popular leisure destination. Especially as my next steps took me past the sprawling holiday village of Howells Mere. Even now, in late August, it was busy with families milling about all over the holiday village. It had be quiet for me before the village and soon after clearing the area of Howells Mere it was quiet again. Good, I thought to myself, I much preferred the peace and quiet today. 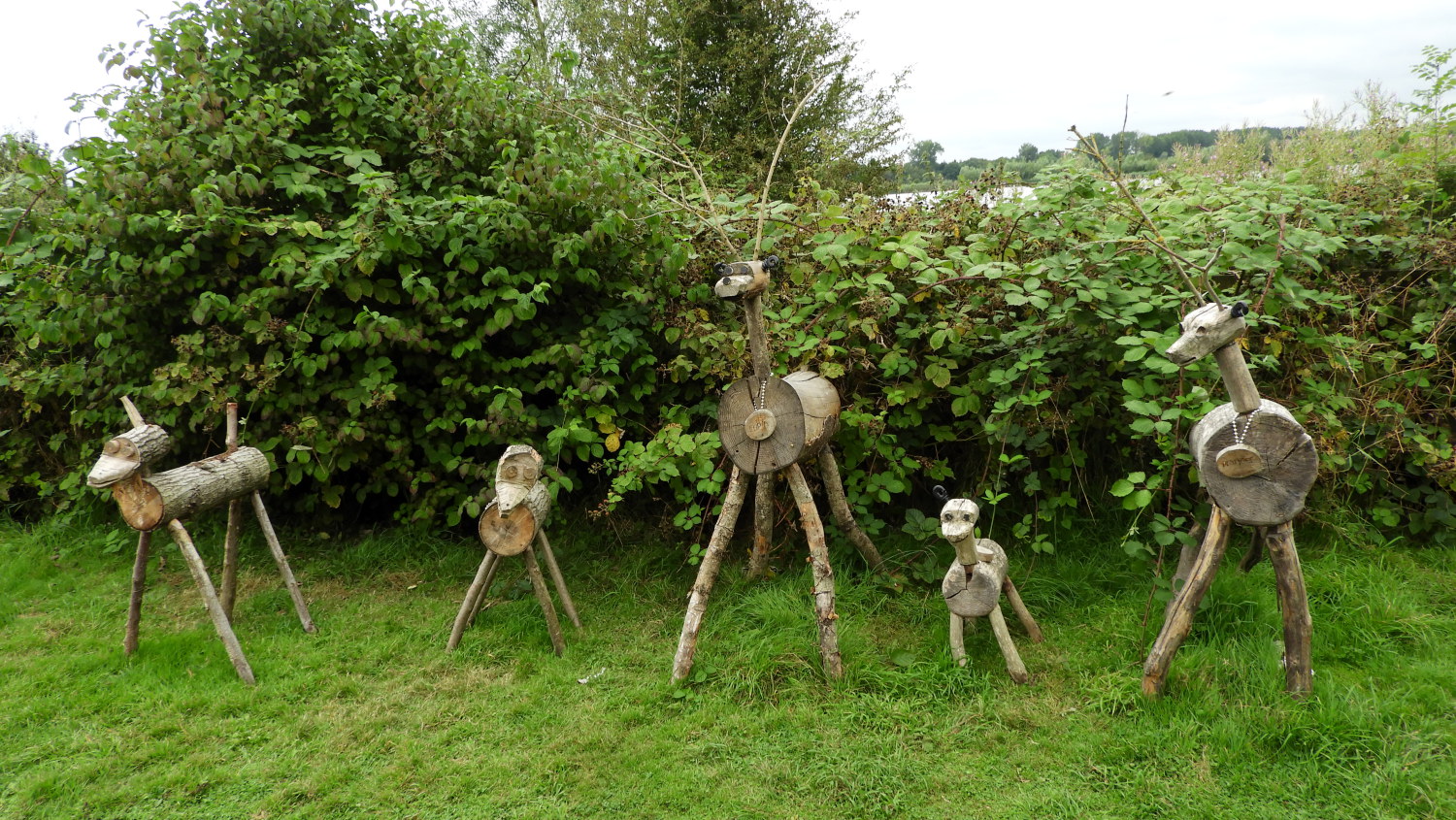 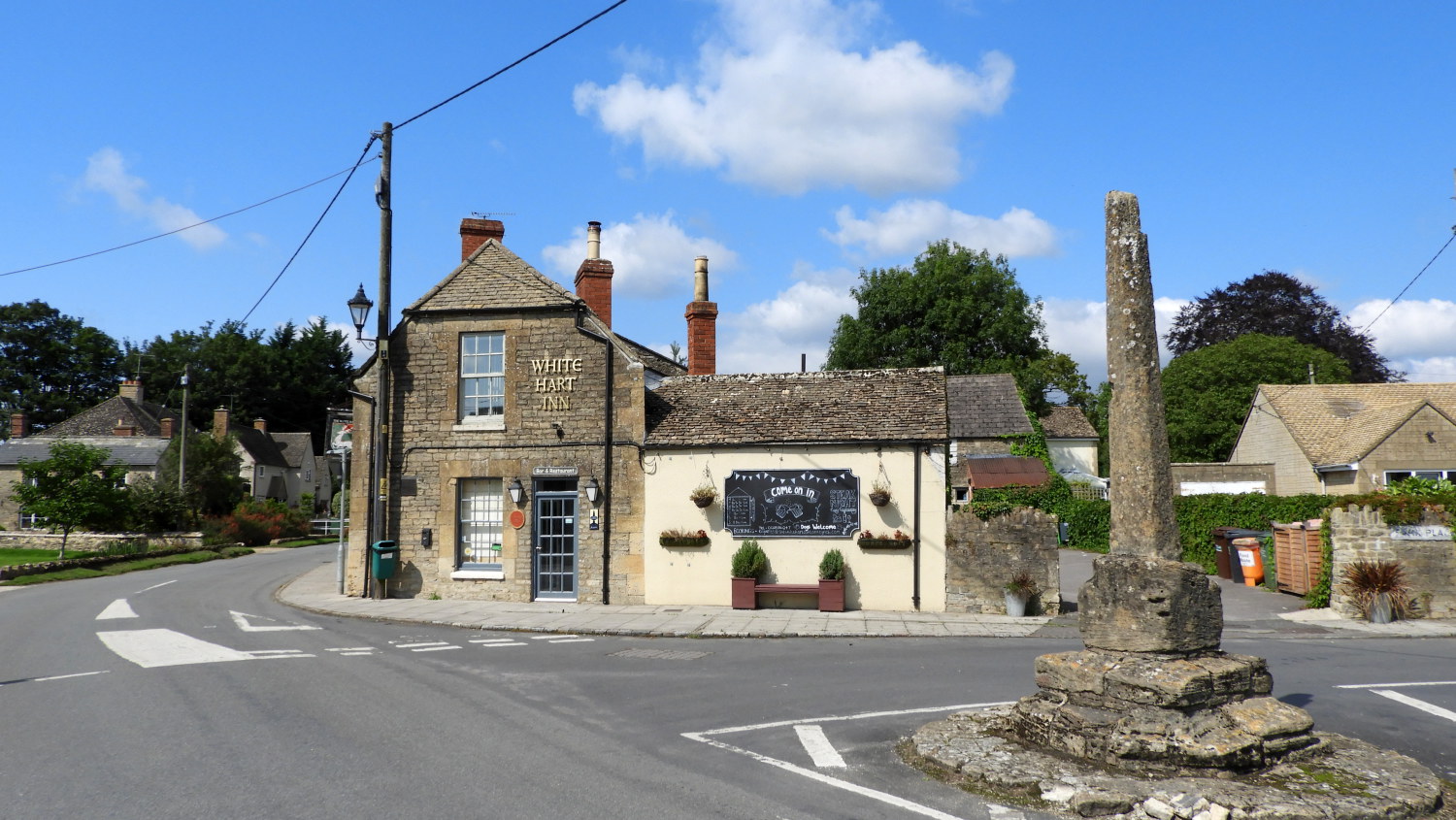 The BBC weather forecasters had promised me fine and settled weather for the first half of the walk at least and a sunny day today. But only now, after passing Howells Mere at around lunchtime, did the sunshine begin to break through the cloud. The brightening sky delighted me. It was now time for my first refreshment break of the walk which I took in a picnic area near to Freeth's Wood between Howell's Mere and Ashton Keynes. In the company of Santa's Reindeer, a group of wood carved animals with a couple having the name tags of Cupid and Prancer. I could guess the rest. After my refreshments, suitably charged up, I continued onwards to the beautiful village of Ashton Keynes. I ambled through the lovely quiet place. Thoroughly at peace and enjoying myself in the midst of warm late summer sunshine. 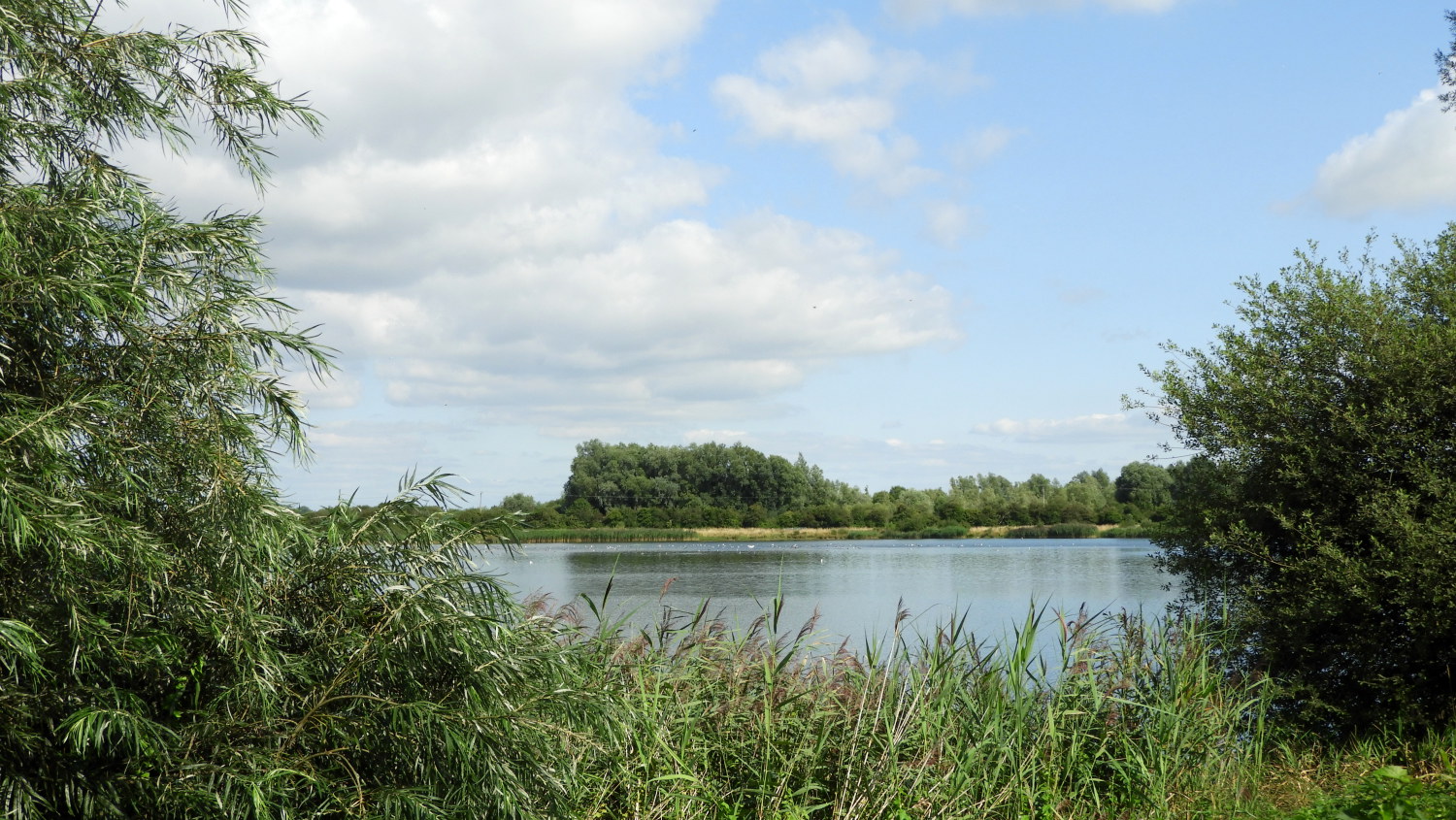 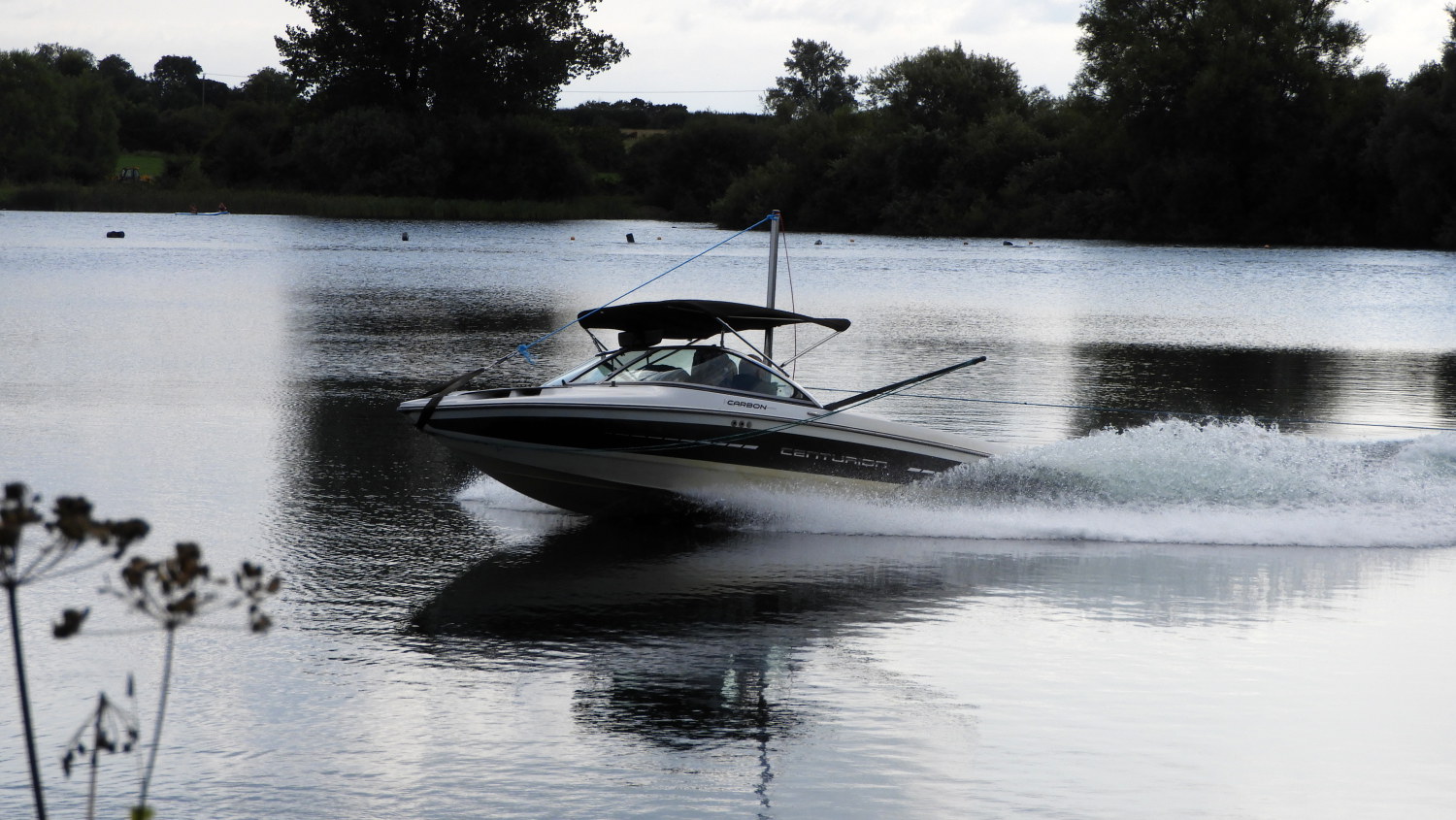 Having fun on the water

After walking through Ashton Keynes which sits in the southern centre of Cotswold Water Park I followed quiet country lanes back to some of the many lakes within. Here the path edged around the waters, sending me southwards, eastwards, northwards, in repeated turns but never in the direction of west. I was heading as you scan left to right across a page, rounding the blue bits. Mostly it was quiet with trills of birdsong coming from the trees and shrubs lining the lanes but at Manorbrook Lake these natural sounds were drown out by the sound of a speedboat scurrying across the water. I spotted it pulling a pumpkin coloured inflatable with two adventurers holding on to it as they bounced over the water. In vain. One bigger bump and they were thrown out into the lake. In their cumbersome life jackets they bobbled up and down in the water until the speed boat hauled the inflatable back to them so they could recover themselves from the lake. All part of the fun. Leaving the thrill seekers to enjoy themselves some more, I continued on my way and back into the realm of natural peace. 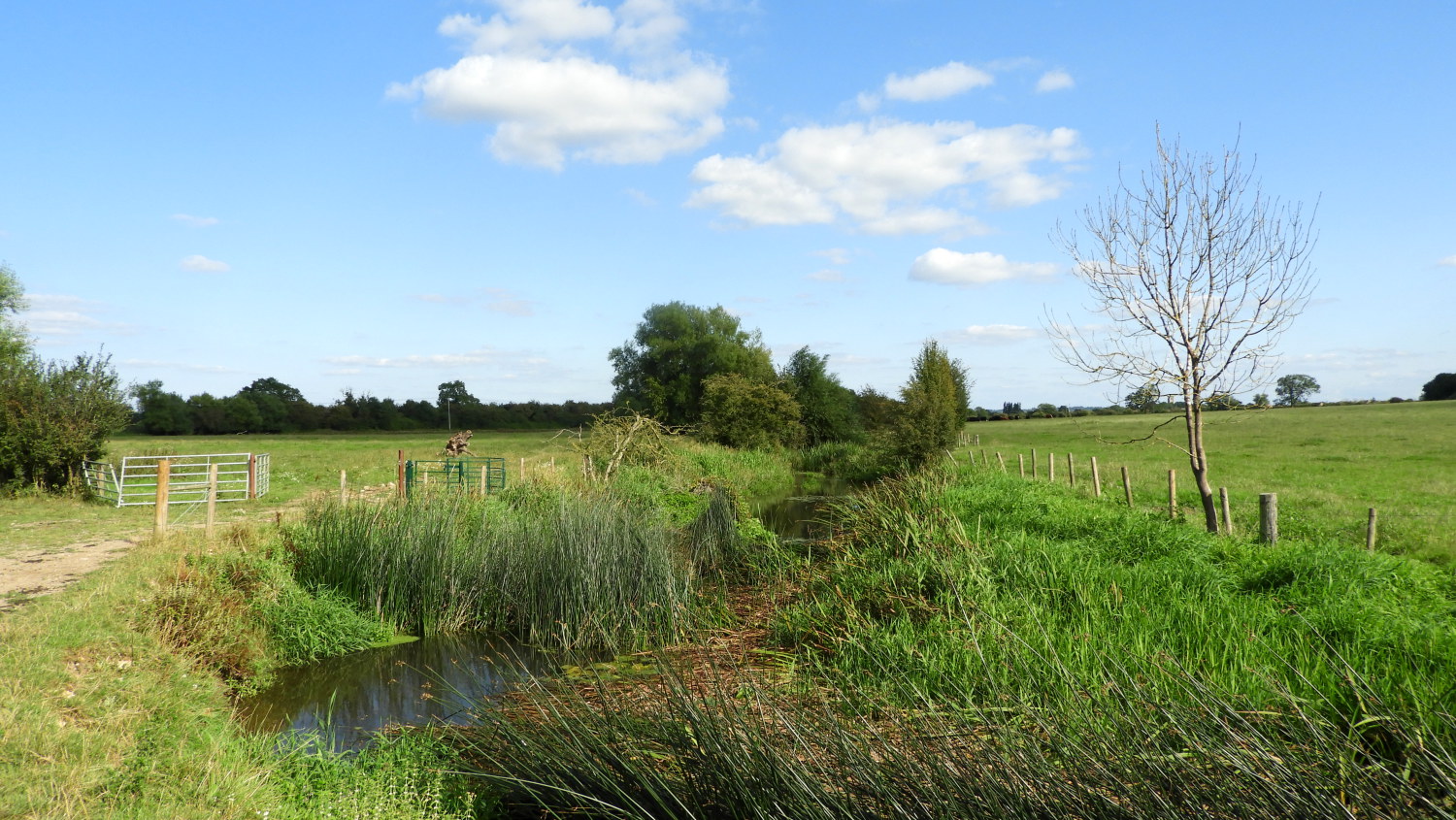 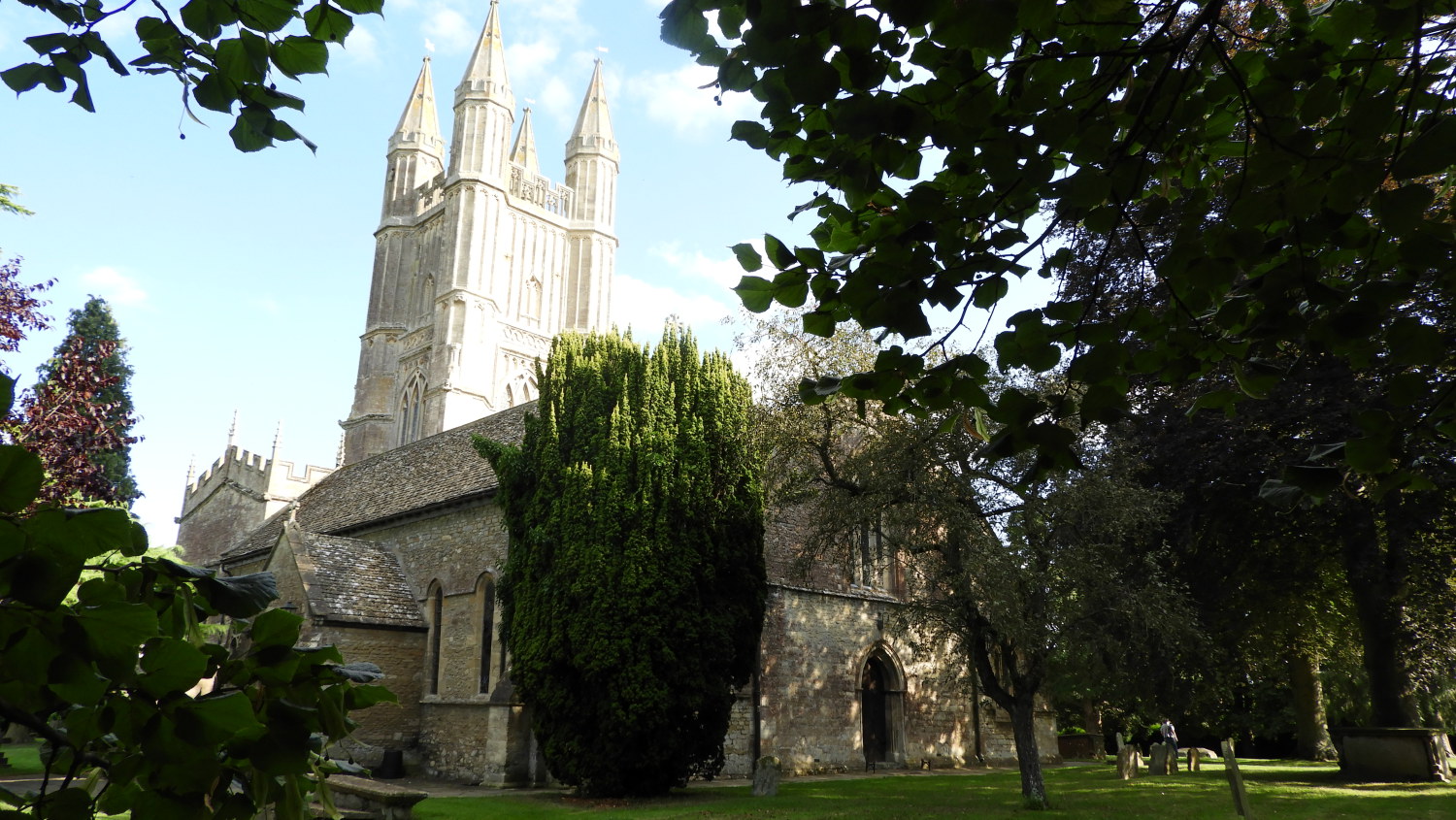 I came out of Cotswold Water Park and in doing so I came to the fringe of North Meadow National Nature Reserve, following meadowland paths which would lead me all the way to Cricklade, the first destination of my Thames Path walk. Now, after a little over ten miles of walking did I reach a proper river, the River Thames actually filled with water and meandering naturally across the fields. It was delightful to see it as it should be. "Hello River Thames" I said to myself. Meandering with the river for the last two miles of the day to Cricklade was a thorough delight and I was feeling I was now truly on the trail of the River Thames all the way to England's capital city. I had a wide beam on my face as I arrived in the lovely north Wiltshire town. Relaxing sitting on a bench in the churchyard I whispered to myself "I'm loving this", knowing I couldn't wait to start walking a continuing my Thames journey the next day.