Summary: This ramble is a jewel which begins in north Leeds in the suburb of Alwoodley. Drive along Alwoodley Lane and park up on the verge or at the side of the road near to the public footpath sign near the map reference SE305408. Look closely and you will see a lane leading north to an avenue of trees. This leads you across Sand Moor golf course and to a walk in pleasant quiet countryside along leafy lanes, quiet roads and tracks on a circumnavigation of Eccup reservoir. During this super two hours walks take some time to look into the air. You will be unlucky not to spot the magnificent Red Kite, reintroduced to the area in 1999 and now thriving. 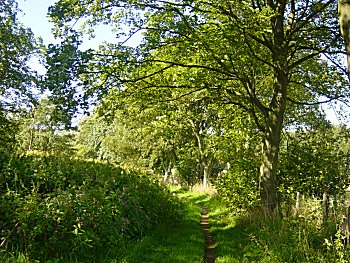 A lovely tree lined avenue to begin the ramble 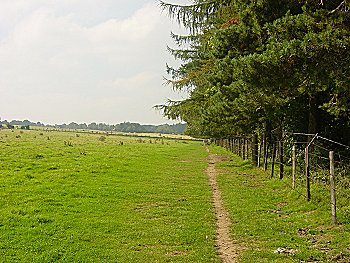 The track is clear to follow along Goodrick Plantation


The unpredictable and fairly disappointing summer of 2004 was at an end. This was the last day of summer but the forecasters had promised it was to be a glorious one and if so I was going to take full advantage. In the morning I was working from home but also keeping a close eye on the weather outside. Although the Met had given the sunny day prediction the morning, as is usual in September, was very misty. It was slow to clear and although the sun had still not broken through at 11.00am I could see blue sky emerging so I downed tools and ran upstairs to put my walking shorts on. I had soon put together a small walking snack together and off in the car the short distance to Alwoodley. I had planned some days ago that if I got the opportunity I would walk around Eccup Reservoir in an attempt to get some good pictures of the Red Kites. And also, enjoy a super short walk. By noon I had arrived at the start of the walk on Alwoodley Lane, changed into my walking boots, and off down the leafy avenue which led me over Sand Moor Golf Course onto the paths around the reservoir. The sun was beaming down, it was still, and I was in my element. I gamboled along like a young lamb along the side of Goodrick Plantation. It was a fantastic day now. As I walked I met a couple of walkers going in the opposite direction. They were as happy as I. 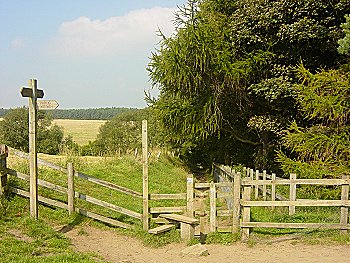 Join the Dales Way Link at the end of the plantation 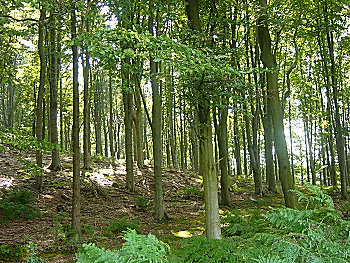 The track to Owlet Hall Farm


At the western edge of Goodrick Plantation I followed the Dales Way Link north to Rookery Farm. While doing so I spotted my first Red Kite of the walk in the air to my right. As soon as I had noticed him I saw a crow fly directly up to the Kite and attack it. although the Kite was considerably larger it did not put the crow off. It continued to hassle the Kite until it flew off with the crow still in chase. Then they were out of sight. After Rookery Farm I followed the quiet road to Eccup which consists of a small terrace of houses and a farm. At the farm the road becomes a private lane, owned by Yorkshire Water. As I followed the lane I felt a bit peckish so opened up my snack. I wish I had waited a little longer to eat. As I was eating my sandwich I was looking ahead down the road, oblivious to the fact an adult Red Kite was directly above me, and not too high either. As soon as I spotted the bird I dropped my food, opened my hip bag and my money fell out! In my haste I had opened the wrong zip. by the time I had recovered to get out my camera the Kite was in the distance. Drat, damn and blast! I will get a good picture one day. I was disappointed and walked on to Owlet Hall Farm. Soon after I was down by the reservoir and crossed the dam bridge. As I did so I spotted my third and last Red Kite of the walk. 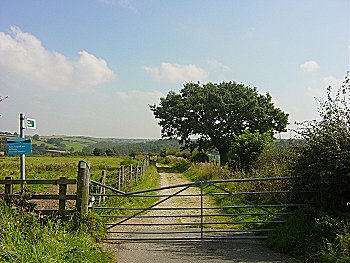 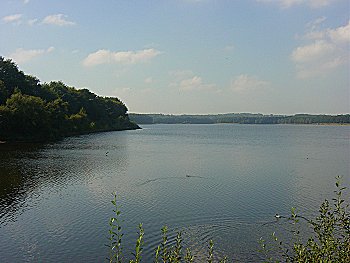 Eccup Reservoir is a wonderful place


This Kite was younger than the other two I had seen. It was hovering not too far from me so I took a couple of pictures. They are the best I have managed to take but still not good enough to put on the web site. I will keep trying. After hovering the Red Kite landed in the trees close to my left. At last, I'll get a decent picture, although not of one in flight. Or so I thought. As I walked closer the bird was settled and I was feeling confident but there was a third party about to get involved. Just as I was starting to aim the camera a crow rushed the roosting Kite and forced it to take off. I missed the shot in the ruckus The darned crows, that was the second time I had seen them attacking the Red Kites. I'd never seen that before. Soon after I was walking on the path at the side of the reservoir back to where I had joined it. This was a lovely section with great views of the reservoir. Ducks were bathing and diving in the waters. It was a relaxing section. All too soon I was back at the path through the golf course and back to the car. I'll be back soon, probably with Lil on a Sunday morning. It is a super short walk and I will get a decent photograph of the elusive Red Kites.