Summary: Lil and I were delighted to do this walk in Upper Nidderdale for two reasons. The first was that we were in the company of my brother Ray and sister in law Karen, thus Lil having someone to talk to on the walk while I wander on ahead. The second reason was we had some lovely winter snow, the most significant for 18 years. It made for some tough walking but spectacular scenery which we all enjoyed taking in during our eight mile tour. 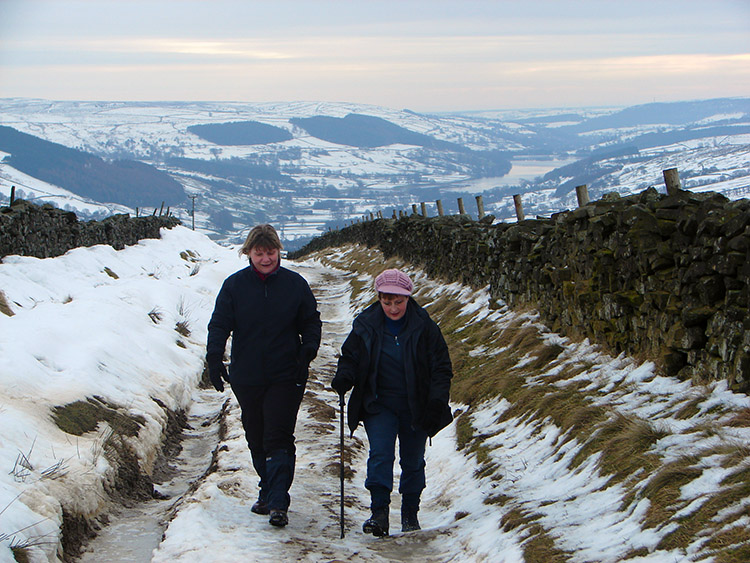 The walk begins by ascending In Moor Lane 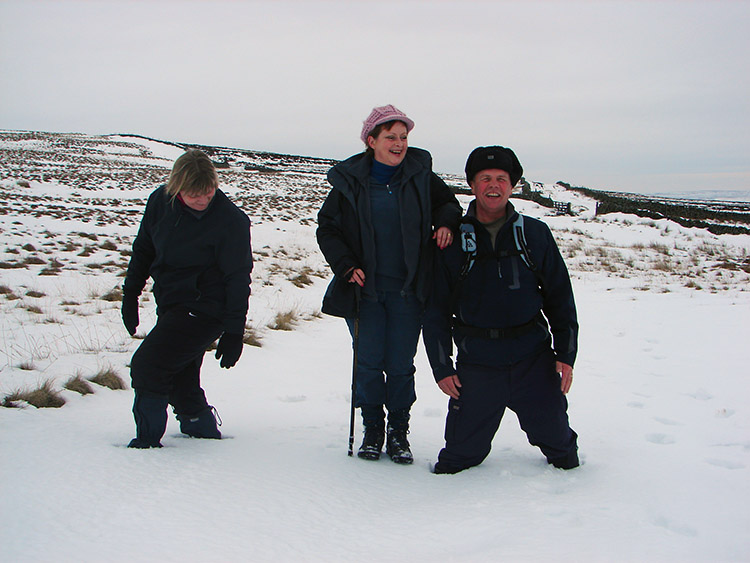 Ray and Karen get bogged down in deep snow

It was the most snow for 18 years according to the weather forecasters. During the working week commuters had suffered widespread disruption. Roads were closed, many minor ones left untreated and the gritters had got close to running out of salt. Some local authorities closed schools and even some county councils ruled out education on a widespread scale because of the risk to the pupils during the trek to and from their learning centre. Even businesses closed down some days and on one Monday London decided not to bother. We had this disruptive snow for two weeks and it was two weeks of carnage to the British way of life. The European immigrants were puzzled, they always coped with much worse at home. We British seem to have lost the ability to manage the cold white fluffy stuff. One good thing the snow did bring though, beautiful enhanced scenery to the countryside, especially the hills. And so to the hills we went. Upper Nidderdale was the chosen place and what a good choice it was. 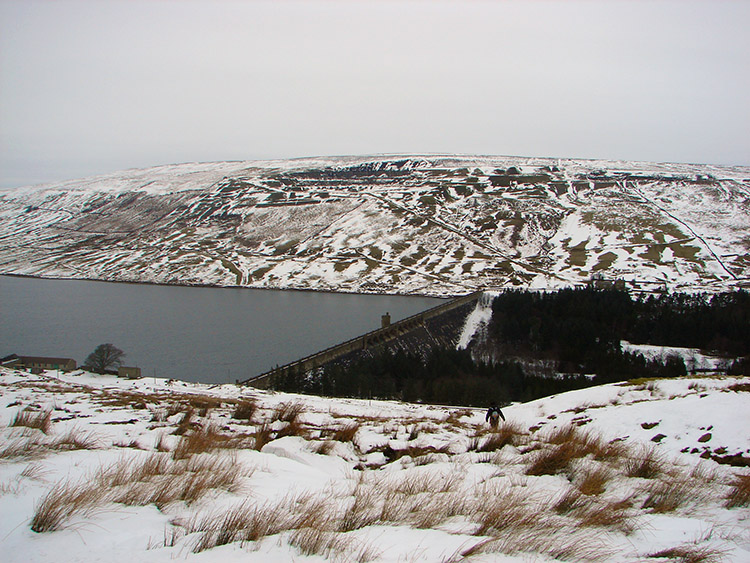 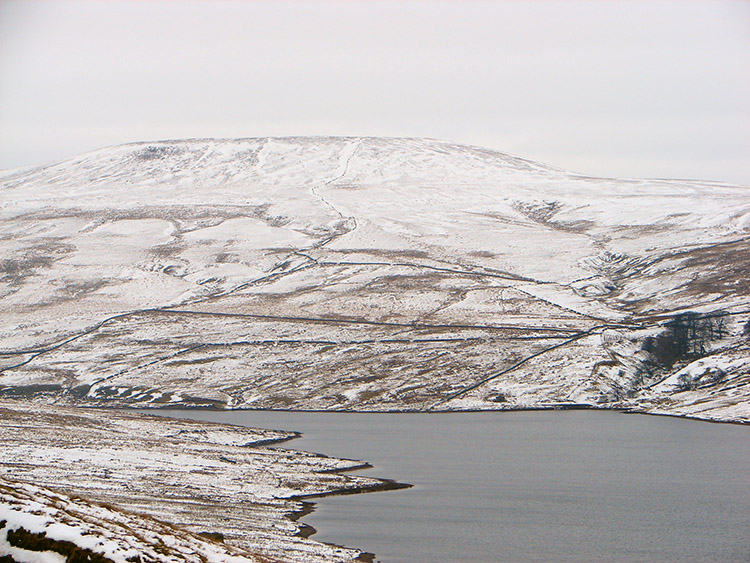 Ray and Karen were over for the weekend and fancied a walk whatever the weather. It was an overcast day but that was not to deter us and so I drove up into higher Nidderdale to take a walk from Middlesmoor. From here we were guaranteed to get some spectacular views of hills and high ground covered in snow. I had originally planned to walk from Scar House Reservoir to the Little Whernside and Dead Man's Hill ridge but temporary road signs showed the road from Lofthouse to the reservoir as being blocked. We were to find that was not the case later on and I was irked by being put off by incorrect signs. Fall back plan was to walk from Middlesmoor to Scar House Reservoir along In Moor Lane and then make another decision. And so that is what we did. I parked in the car park above the village on In Moor Hill and we prepared to walk. 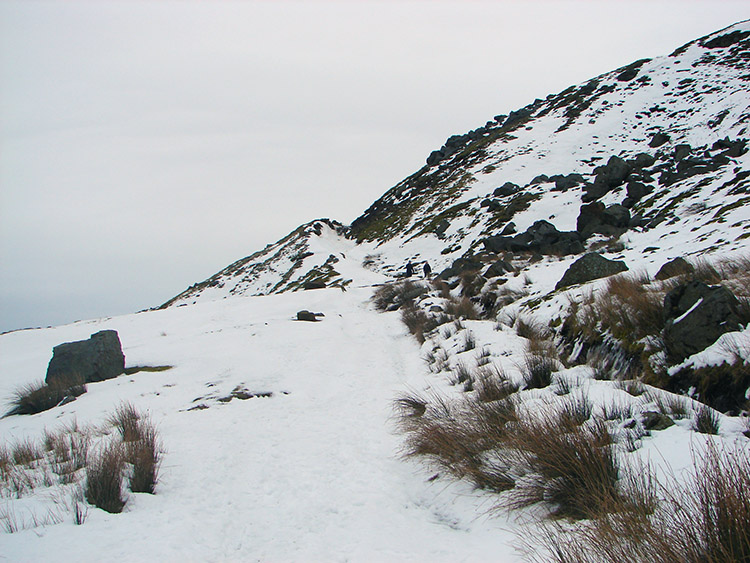 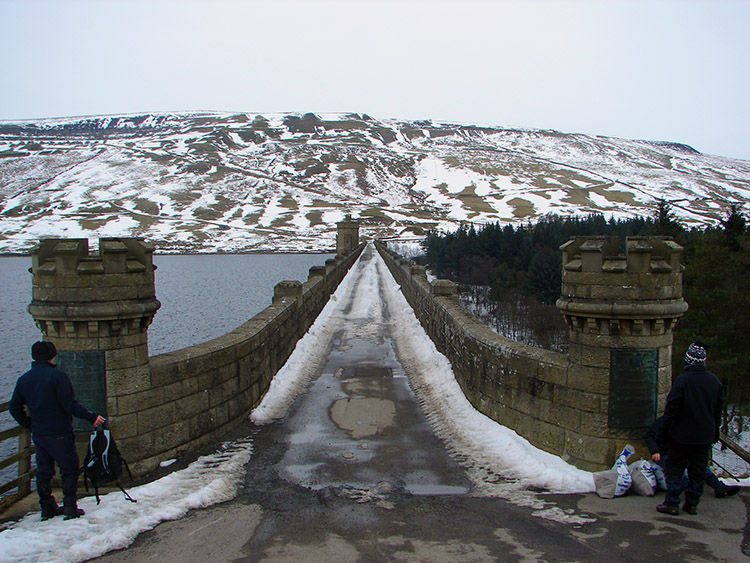 The first mile and a half of the walk was a steady continuous climb from Middlesmoor along In Moor Lane in a north west direction to Scar House Pasture. The climb was made all the more harder by the frozen snow which had turned to sheer ice in many places. Often it was easier and also far safer to tread off the ice into deeper snow. By doing this our passage was slowed but we were compensated by the improving views of the hills all around us which was always better the higher we got. Never mind the difficulties caused by the white fluffy stuff now, we were loving walking in it and walking with it all encompassing. At times the deep snow gave in under our weight. We often ended up knee deep and having to drag ourselves out. This did tire us more than a normal walk should and after the tricky descent from Scar House Pasture to the reservoir we took stock while having a drinks break. 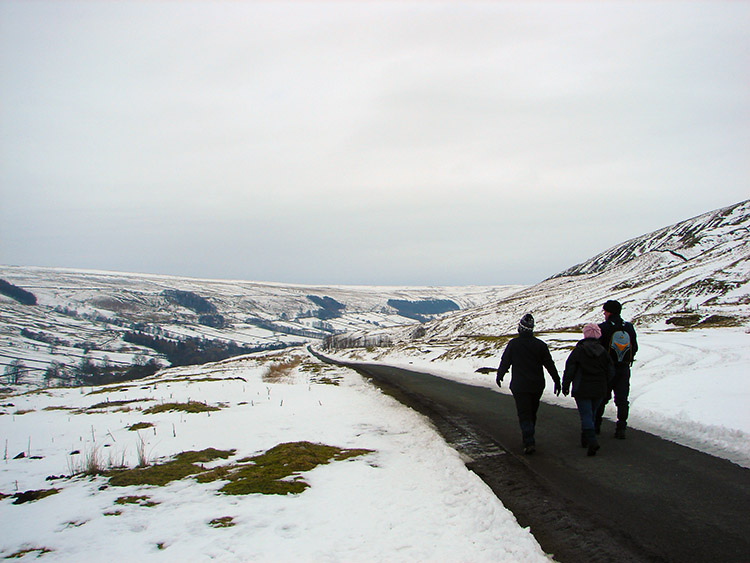 Following the road to Goyden Pot 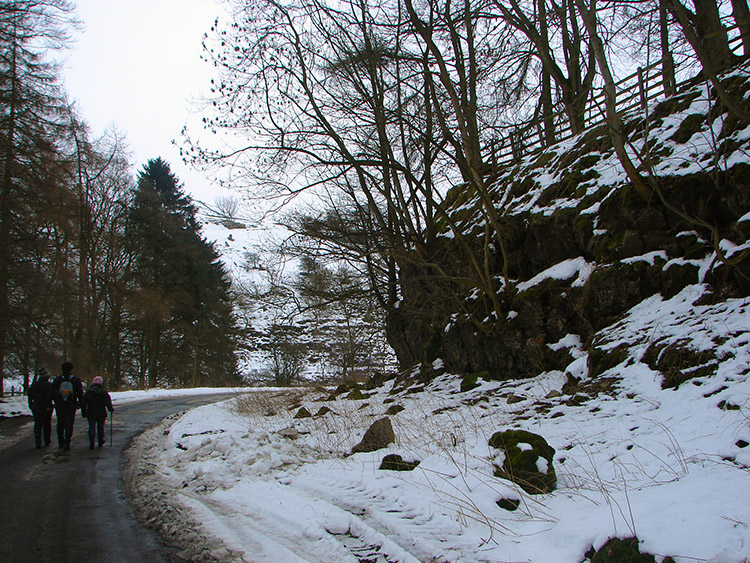 At the reservoir we all agreed that the hills were out of the question today. We had done 3 miles from Middlesmoor to the reservoir and whilst we were in fantastic surroundings we all knew an expedition to the tops would kill us off from the planned evening out and curry later on in Harrogate. From the reservoir we had two choices, to cross the dam road and follow a low track back to Lofthouse on the Nidderdale Way or to follow the road back. It was so quite on the track and the easiest option so I took it. All concurred and so after our refuel we set off due east and followed the reservoir road towards Haver Close. Everyone enjoyed this section, it was easy trekking and by doing so we all had a rich and varied conversation on the meaning of life! And all this with wonderful views of Upper Nidderdale to take in. 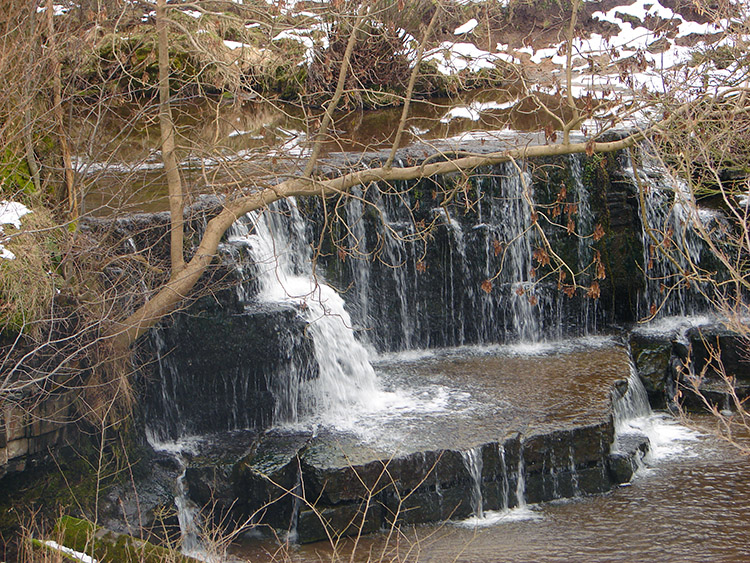 The River Nidd upstream of Lofthouse 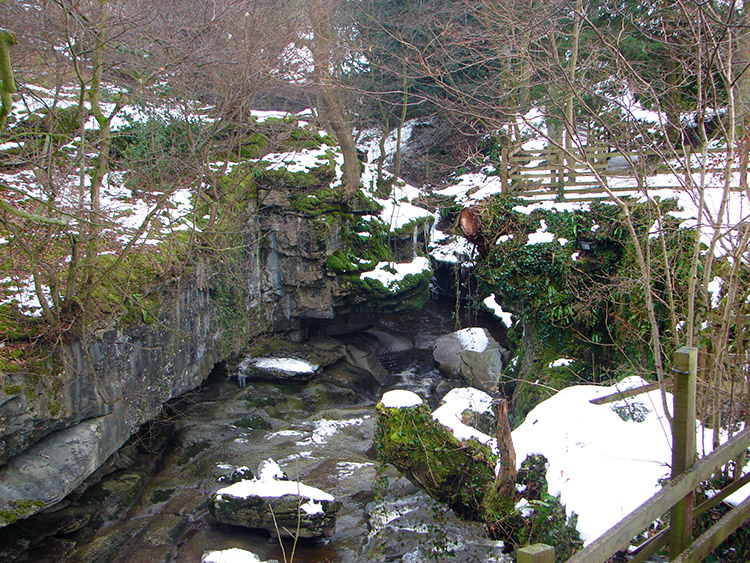 At Haver Close our course changed from east to due south. More debate on current issues, family, friends and a plethora of other subjects followed for the next 40 minutes/ two miles. I recall a discussion Ray and Karen had on the number of bulbs in a package in a recent garden purchase. Karen thought 48, Ray thought 100. They agreed to differ but as we walked on Ray whispered to me that he planted them with about 75 used and the remaining quarter being bulbs not worth the soil and so discarded. There was never serious argument, just constant dispute on a range of subjects. It is humorous how the girls have their opinions on subjects during a walk and the boys have theirs. They are never quite the same. Hang on, that's a lovely small waterfall on the young Nidd to our left. Oh, we're near the end of the service road now, let's have another breather while we decide what to do next. 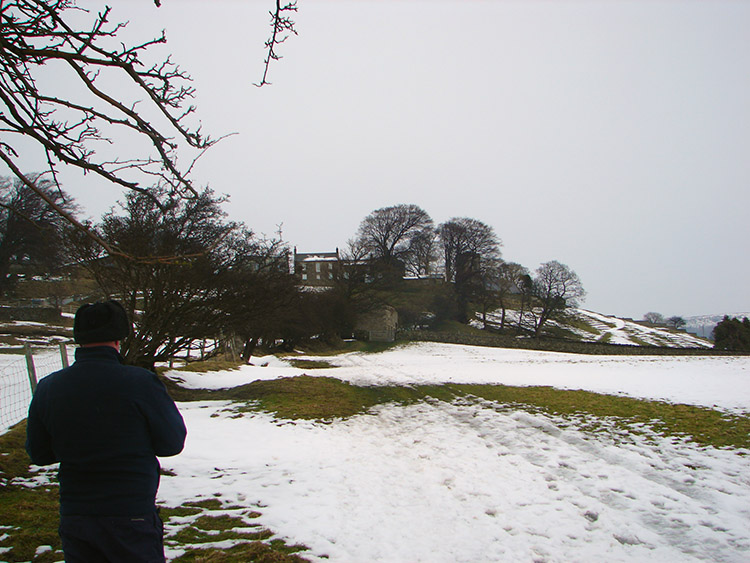 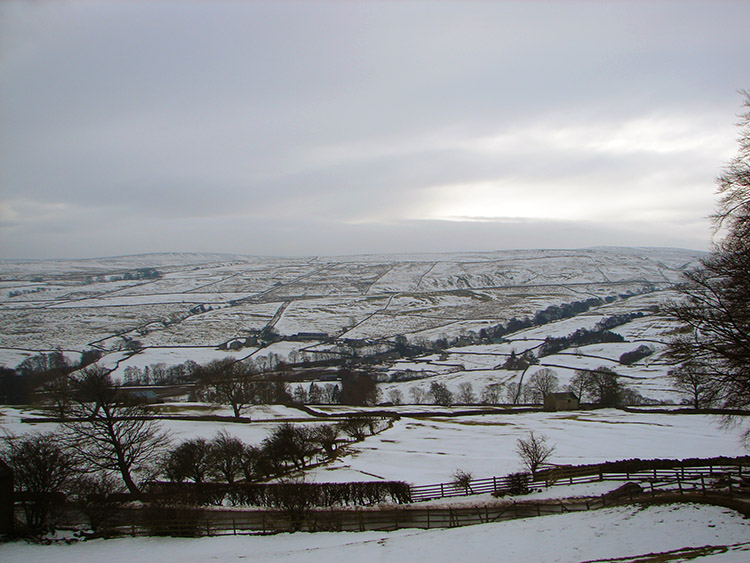 I had secretly planned to include How Stean gorge on to this walk, ever since we had discarded the high ground idea and so at Lofthouse we followed the road and the signs to Nidderdale's Little Switzerland. The gorge is a micro adventure and a lovely setting. We walked along the spectacular feature and were ever so heartened to find the facility cafe open. Straight in for a coffee, no messing. We all enjoyed marvellous filter coffee much recommended and then we availed ourselves of a free top up. We also enjoyed a toasted tea cake each. Indulgence well earned for doing the walk when shopping in Harrogate would have been an easy option. After our cafe break we left the building to do the final haul of 100 metres ascent in one final kilometer back into Middlesmoor. As we left the cafe it had started raining. The girls did not fancy the last bit and so to make haste Ray and I decided to head back for the car and leave the girls to have a beer in the cafe. And so that is what they did. 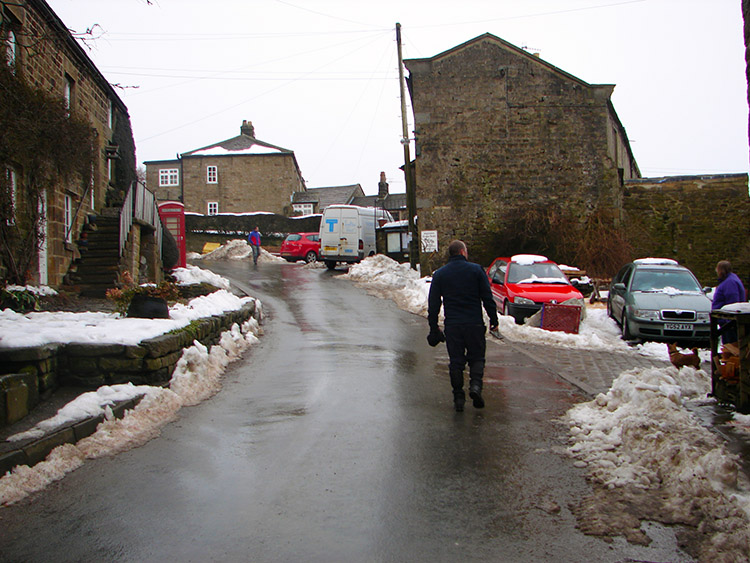 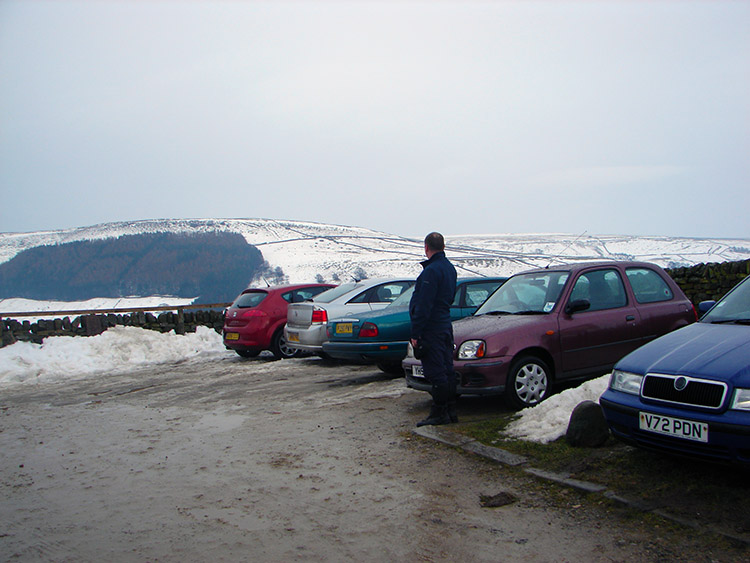 We walked from the gorge cafe to the hamlet of Stean and then cut north over a footbridge and then over fields towards Middlesmoor. Having relaxed too much in the cafe I was tired and the haul through mud and slushy snow was not any fun at all. At least in my breathers I could look back at the snow clad hills. They inspired me on and I followed Ray who at this stage was a little better physically through the last field and onto the road which took us through the delightful village of Middlesmoor and back to the car. After changing we drove down to the cafe for the girls. The alcoholic drink imbibed had given them the giggles. With all in good heart we had a good journey home recalling a lovely winter walk and later in the evening we had a great curry.