Summary: This walk is a challenging hike onto the moorland that acts as a border between the Yorkshire Dales National Park and Nidderdale, Area of Outstanding Beauty. Starting from near Lofthouse in Upper Nidderdale the first half of the walk is a continuous climb to Riggs Moor and Sandy Gate which is on the border of the two areas before the second half of the walk climbs to the trig point on Meugher before the descent begins on Stean Moor and all the way back to the start in Upper Nidderdale.

The Walk: I was looking forward to the walk, it was the first one for quite a few weeks and there was the prospect of some snow walking on the higher ground. Also, not only was I being joined on the walk by regular walking pals Dave, Jez and John but also by my nephew/ godson Sean. It was good to see him; he has taken to walking at a young age and already has a few long distance walks to look back on and with more to look forward to including the West Highland Way which he had planned for later in the year. 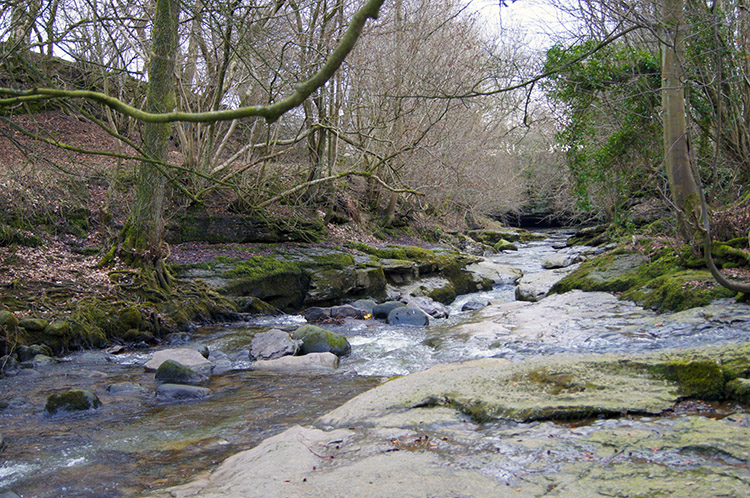 Stean Beck near How Stean Gorge 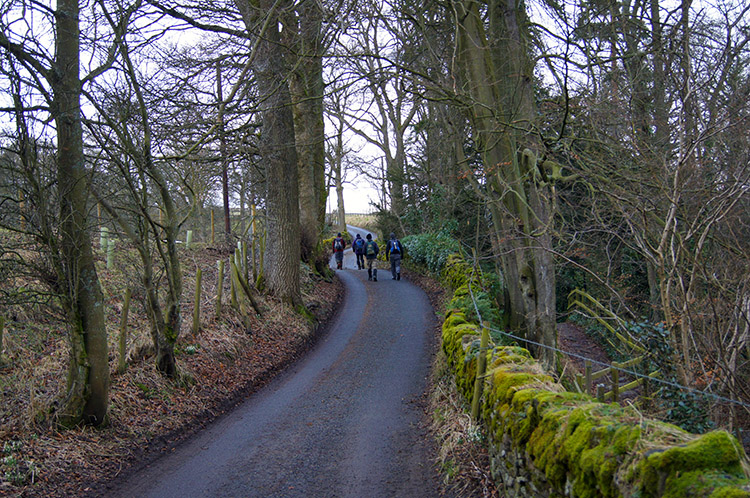 On the road towards Stean village

It was a lovely February day. After a summer to forget in 2012 and a wet Autumn and a wet winter it was great to be out on a dry day. More exciting was the prospect of sunshine, a rare commodity in recent times. We arrived at the car parking area around 9.30am and set off briskly along the road to Stean. After about 100 yards of brisk pace though I turned off the track, made my way through a gate and took myself down to the bank of Stean Beck to take a photograph and take in the scene. While I did so the others walked on and up the road so after making my way back from the beck and through the gate I had to walk very briskly for a few hundred yards to catch them up. 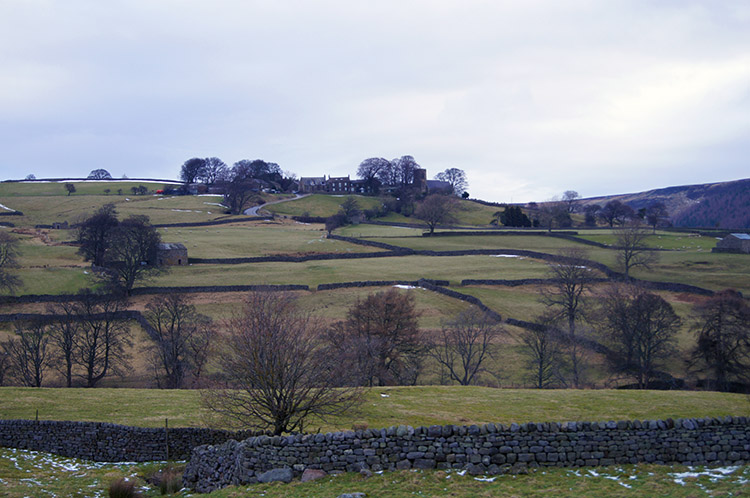 Looking to Middlesmoor from Stean 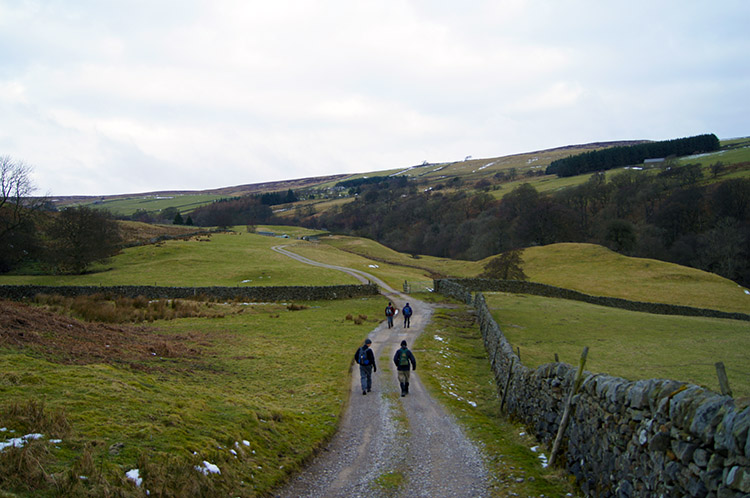 The track from Stean to Well House

After three quarters of a mile of walking on the tarmac road to Stean we walked halfway through the small hamlet of a few cottages and farms before turning right and following a farm track which took us through the yard of one farm before continuing on to another. The second one, Well House, was the point where we left the track and walked along a footpath closely past the farmstead. As we approached the buildings two dogs ran towards the protected edge of the front garden area and barked loudly as if to say "You're not welcome". They were not vicious or threatening dogs, just noisy. After passing the gable end of the buildings and out of the dogs sight they scamped all to way around to the back garden and continued their loud tirade until we walked away from the building and into a field. On crossing the field we reached How Stean Beck again and the point of some fun. 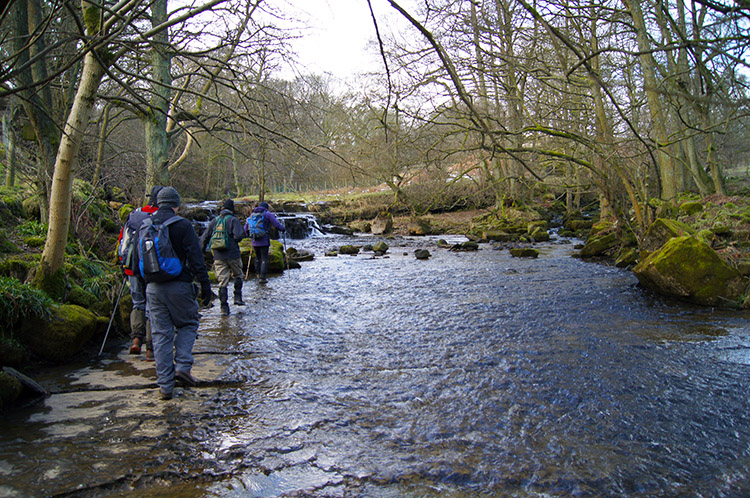 The crossing of How Stean Beck 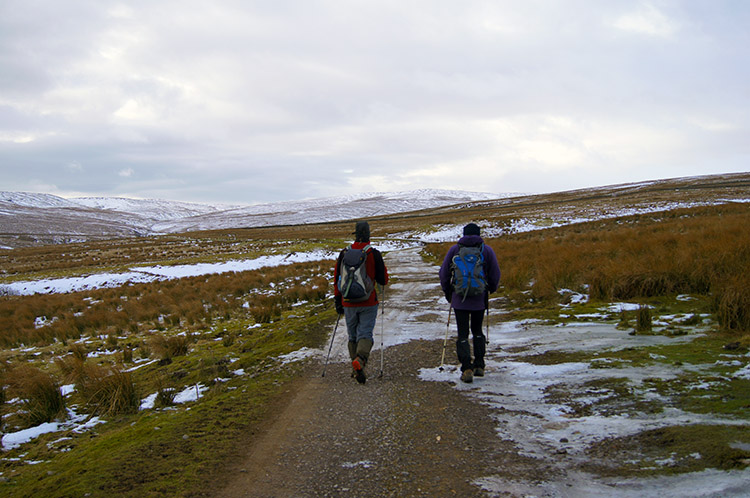 There was only one way across How Stean Beck and that was to ford it. There were no bridges, no stepping stones, just a wide and shallow fording section just downstream of a weir. Carefully we all crossed safely and without mishap. After the fun of the beck crossing we carried on by climbing across a couple of fields to Low Riggs, a working farm and then across another field to High Riggs, a deserted and derelict farm before leaving the managed fields and emerging onto open moor at Blackawell Lathe. We were now on high ground, literally and figuratively - look at the Ordnance Survey Explorer map for grid reference SE 06446 74094 and you will see the 'High Ground' we walked right past. After High Ground we looked ahead to a wonderful sight. At around 400m there was a clear snow line and we were heading directly into it. 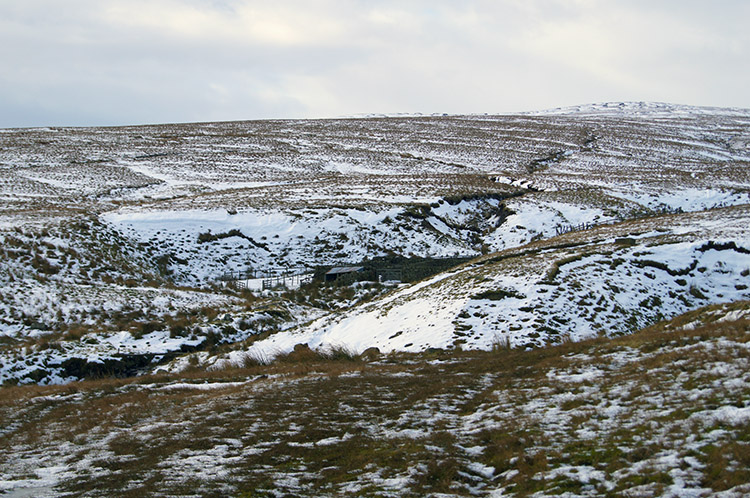 Into a snowy landscape 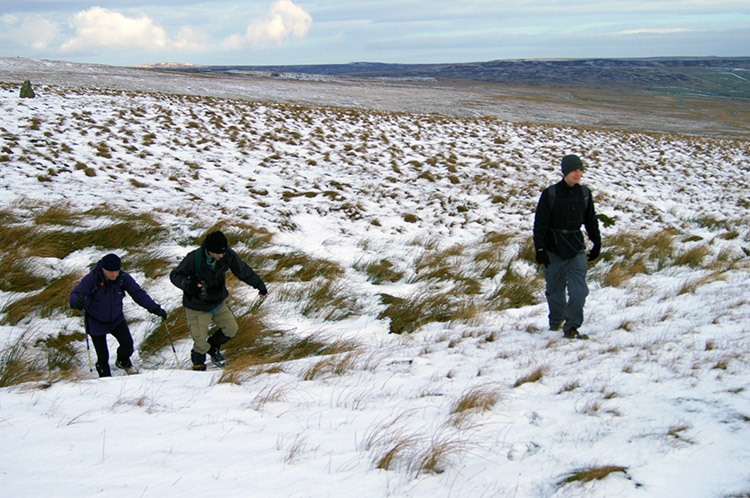 We reached the snow at Aygill Beck and at the point where the vehicle track we had been following on to the moor ended. So, just as the terrain went from harder to softer we also hit the snow. This caused the walking to get harder immediately and as a result our pace slowed. (Note: Looking back at the track log the first eight kilometers to Aygill Beck took us 1.5 hours. The next eight kilometers we to take us nearly three hours, albeit including 30 minutes break but still appreciably slower). The slower pace was due to a mix of the track disappearing and drifts of snow which were a mix of ones bearing our weight and others that collapsed as we trod into their depths. Even in the early sections of snow there were significant drifts. 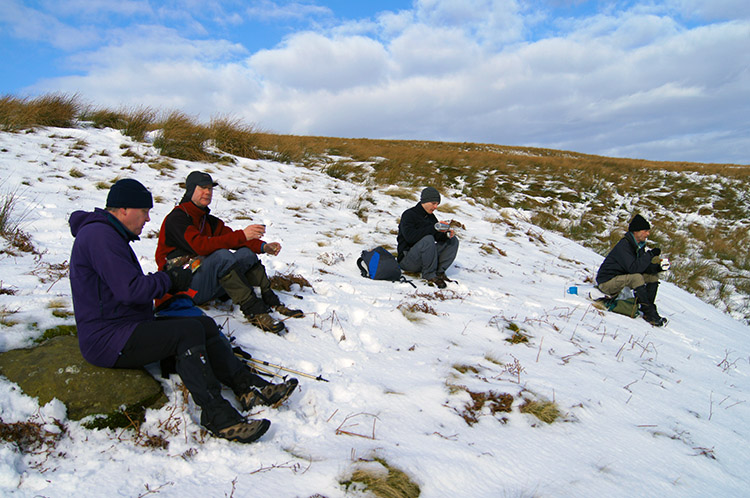 First break of the day on Riggs Moor 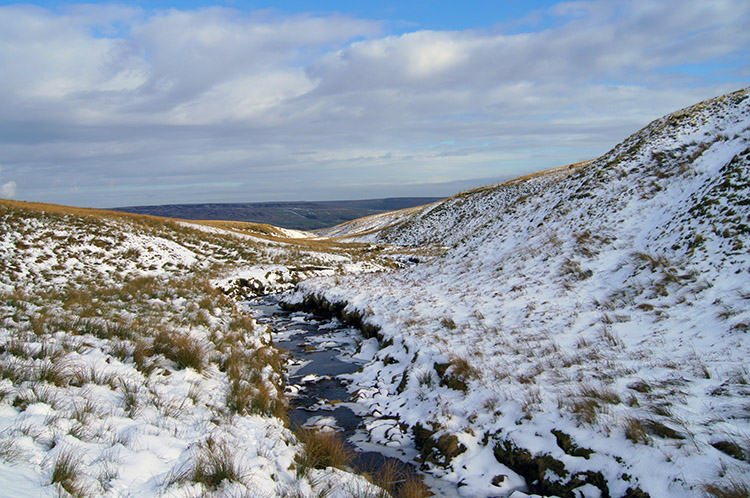 Looking back down Straight Stean Beck

The snow had taken all the evidence of the marked footpath from the landscape so I had to rely on the GPS bearing. And with sod's law applying we followed vehicle tracks for a short distance before I checked the GPS and realised we were heading off course. This oversight on my part, a welcome source of ribbing from my colleagues, meant we had strayed too far west by 250 metres and thus off course in the vicinity of Great Blowing Gill Beck. I corrected by tracking south over Gun Hill Dyke to Straight Stean Beck. During the effort I fell and did a full 360 degree tumble, much to Sean's amusement who was walking alongside me. Just after brushing myself down I spotted John doing a stumble in the deep snow. It was hard work getting back on course so at the beck we stopped for our first refreshment break and a rest. 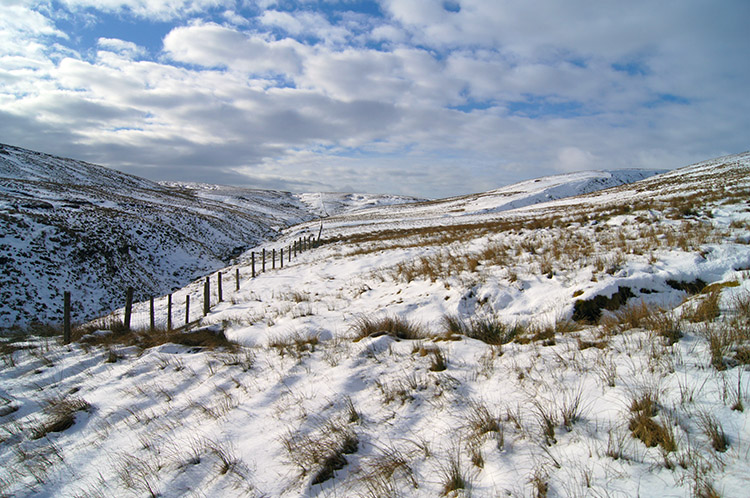 Up towards Sandy Gate 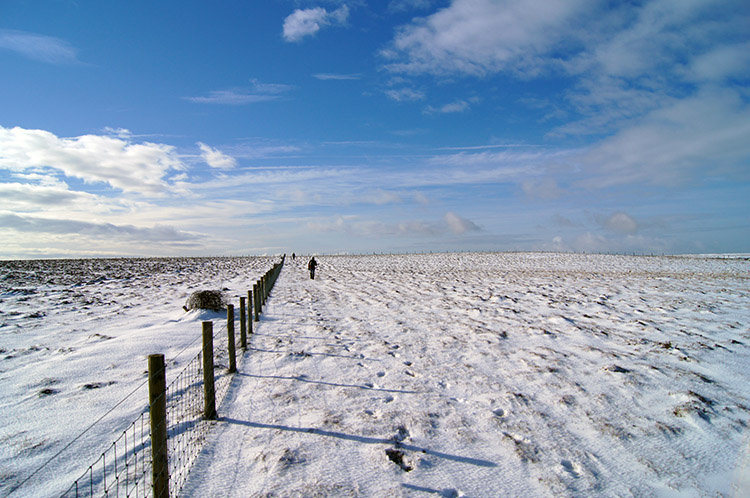 We picked a lovely spot for a break and while we rested the sun decided it was time to come out. With the sunshine beaming itself directly onto brilliant white snow the atmosphere around suddenly and dramatically changed. Walking in sunshine on snow covered moors is a joy. However, the ground underfoot remained a constant challenge. We were on the track alright, the GPS confirmed it, but the track was not one anyone used. The route we were following went from Nidderdale and across the moor to Sandy Gate before continuing over Mosedale to Coniston, Kilnsey and then along Mastiles Lane to Malham Tarn, a well known Friars and Drover's Road. It was clear to me that though the track from Kilnsey to Malham Tarn remained popular, this eastern section of the route was now infrequently walked. We continued on struggling across the moor and often clambering down to cross feeder streams before scampering up from them back to the level. It was so tough that John, Sean and I took turns to forge the footsteps in the deep snow for others to step into. While we did so on our haul to Sandy Gate Jez and Dave turned off the track (or lack of) and headed in a beeline south towards Meugher. As we watched them tramp across the ground we made our way to Sandy Gate and once there mightily relieved. 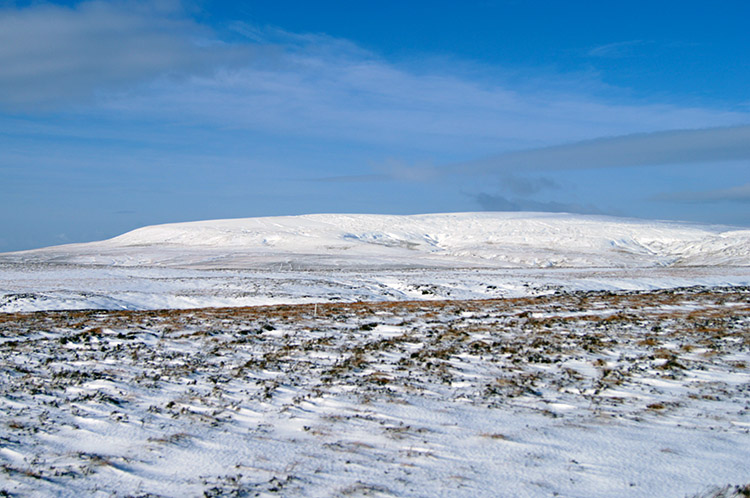 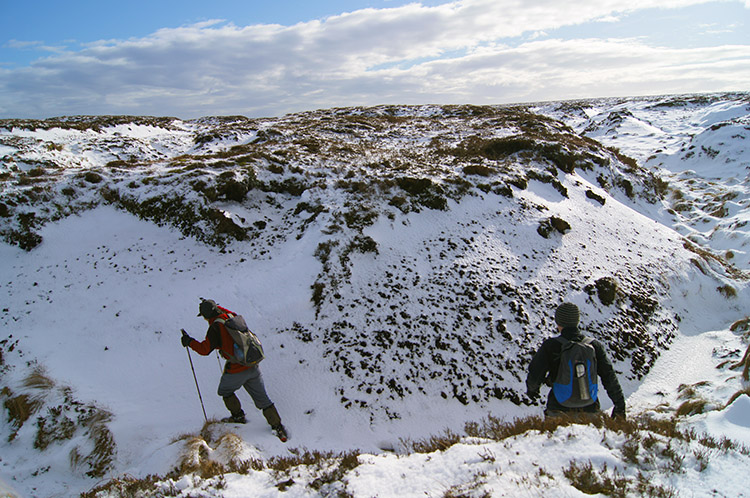 Despite the difficulty the setting was beautiful

From Sandy Gate it looked like a nice flat walk towards Meugher before a final short haul up to the trig point on the hill. What deception, this part of the walk was even harder that the tough haul up to Sandy Gate. There were Peat Hags everywhere. Writing this report up I looked up the meaning of peat hag and it sums them up perfectly. The definition is: 1. A boggy area; a quagmire. 2. A spot in boggy land that is softer or more solid than the surrounding area. 3. A cutting in a peat bog. One, two, three - spot on! 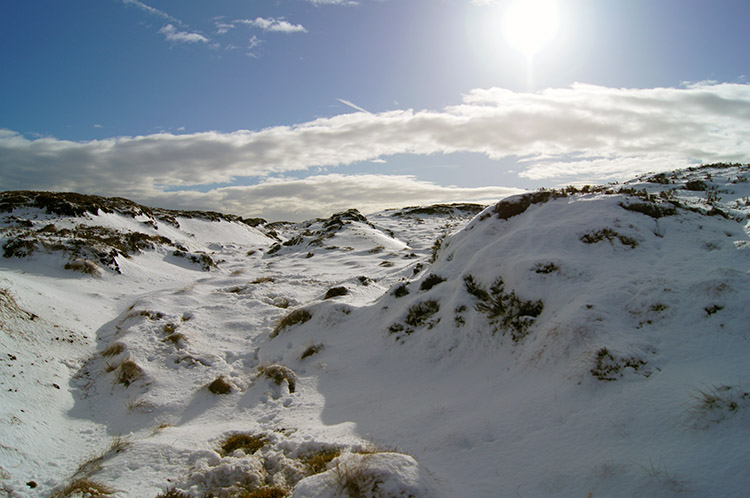 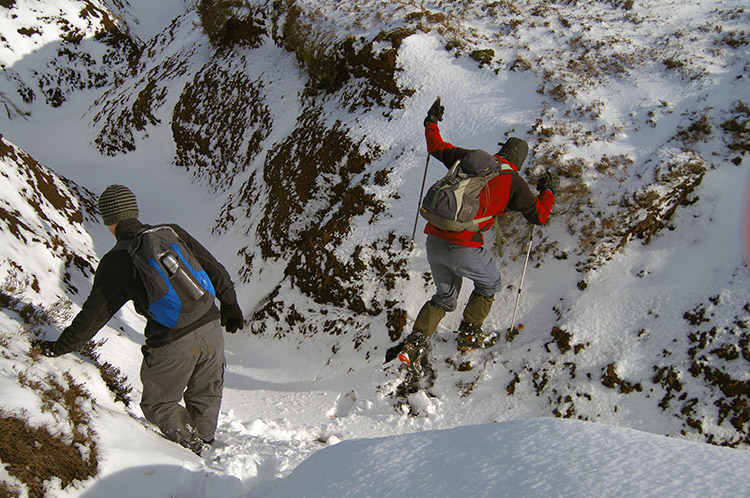 With the deep snow covering the walk across the peat hags was doubly difficult. We often fell into the hags and had to climb out again. I also sunk into wet bog a few times, sometimes up to my knees and despite wearing Gaiters the water got into my boots. My feet were freezing and my big toes numbed by the cold. As a consequence I was getting angry with myself. Still the Peat Hags persisted and still they continued to annoy. I managed to keep calm in the close company of John and Sean. They were finding it hard too and did not need my grumbling. We soldiered on through yet another Peat Hag and then across a short distance to another. The effort made us keep our eyes close to the ground - thankfully Meugher began to appear closer. 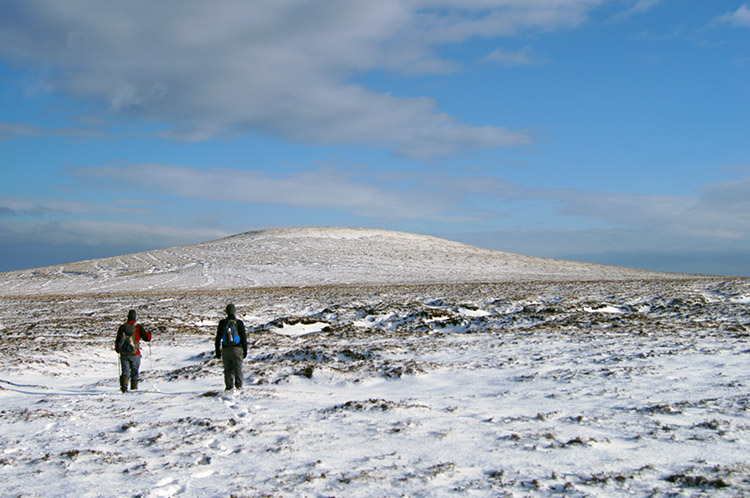 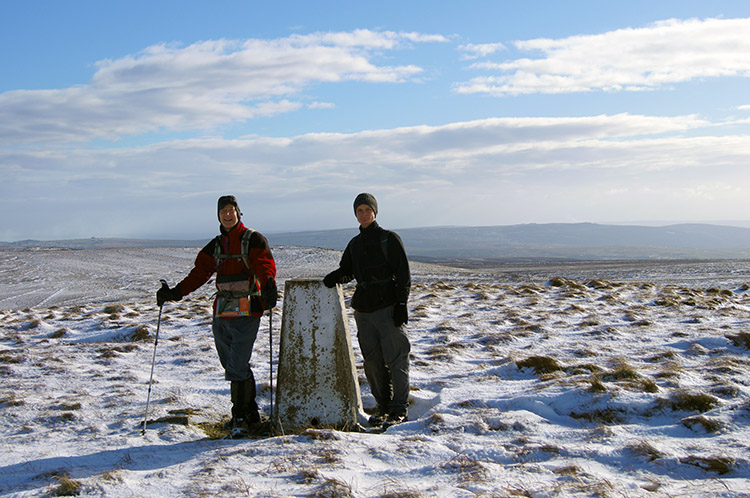 The final hundred metres of level walking before the ascent of Meugher was not as bad as what had preceded. That allowed us to lift our heads high and enjoy the approach. Meugher is a small rounded hill on the long ridge line which separates Nidderdale from Wharfedale. It enjoys the same ridge as does Great Haw, Dead Man's Hill, Little Whernside and Great Whernside. Thus it completes the bag of hills which feed the watershed fueling Nidderdale's waters. It was a delight when John, Sean and I finally climbed the final few steps to the summit of Meugher, a hill at 545 metres high. From here it was downhill.

A wonderful winter landscape on Meugher

Before descending from Meugher I took a look around. The 360 panoramic sweep was lovely with viewpoints including Great Whernside to the north-west, Pen-y-ghent due west and Simon's Seat to the south. The snow shimmering in the milky February sunshine added to the atmosphere of the scene. It was a view well worth the considerable effort it took us to reach it. 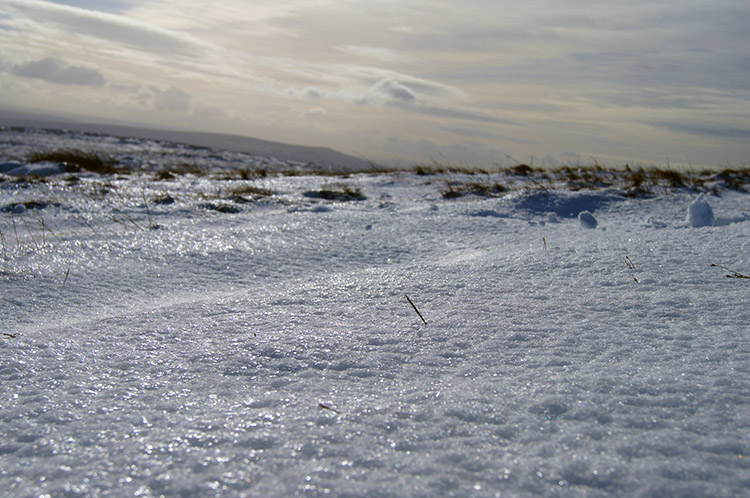 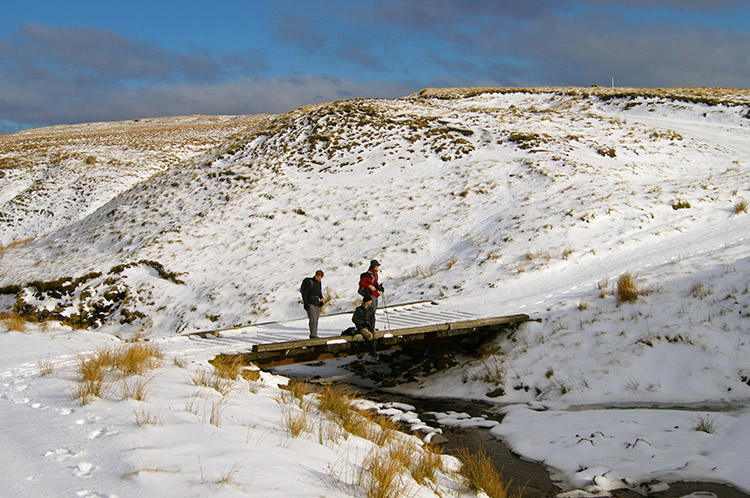 From the summit of Meugher we had spotted Dave and Jez to the east. They had headed to the shooters track at Meugher Drive and waited for us to descend from Meugher before we could resume our walk together and on the long descent back to Nidderdale. After walking across the lovely unadulterated snowscape of Meugher we reached Dave and Jez before taking a short break ourselves. The coffee was good. 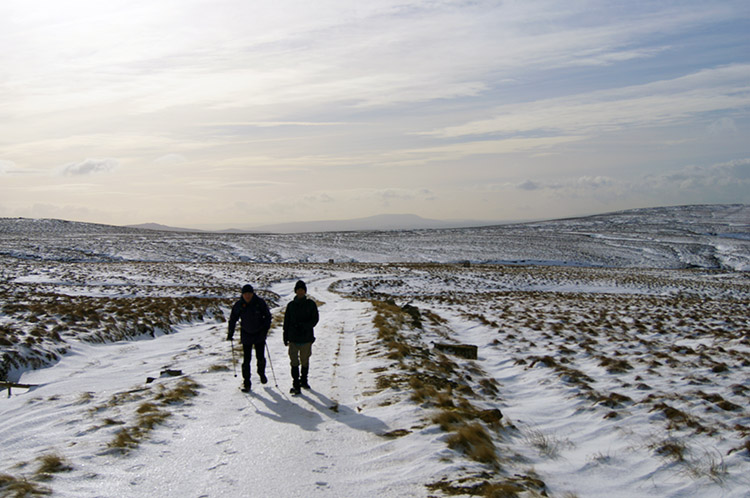 On the descent from Great Stangate 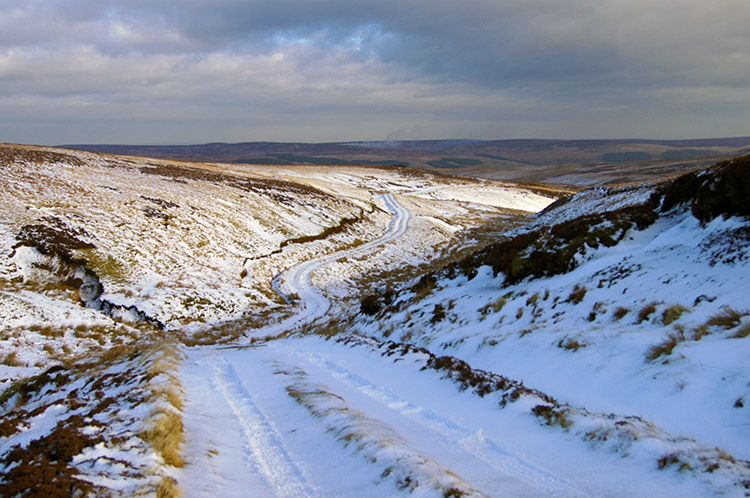 Following the track on Stean Moor

The efforts in the deep snow and across the unpredictable ground had taken their toll on Dave and Jez. Both were carrying minor niggles on the descent. I too felt a little cramped in the calves, it had been hard work up there on the moor and I did not think it is much less so when snow is not around. I guess Riggs Moor and the ground around Meugher is hard work most of the year around. Don't let that put you off coming on this walk though - the challenge is there and the views definitely worthwhile. 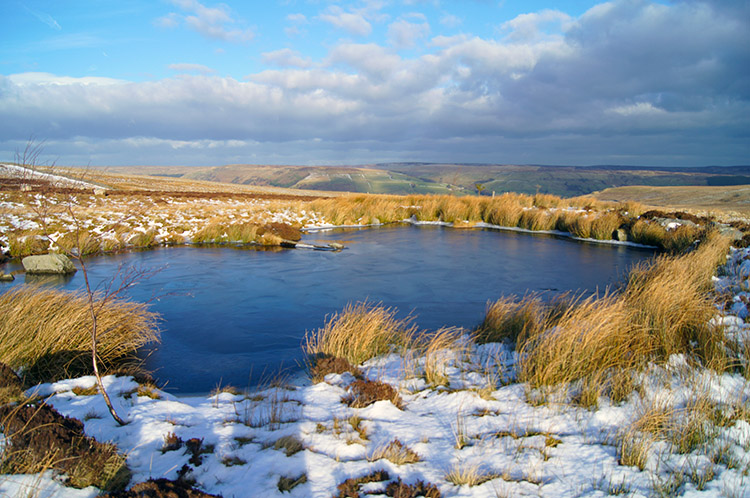 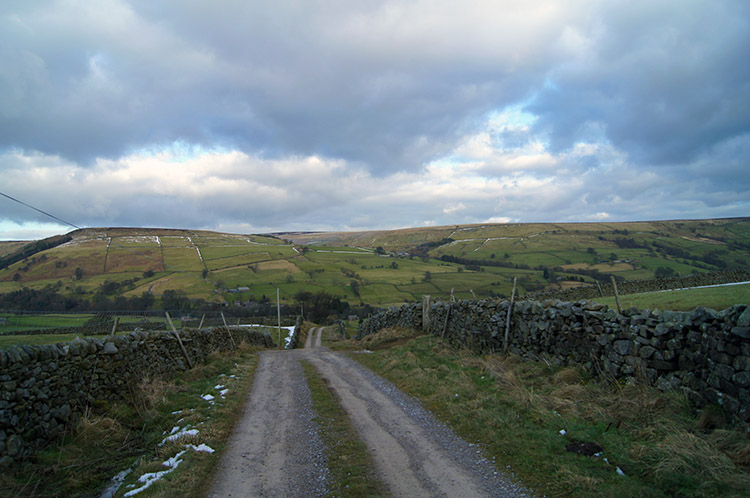 Below the snow line and nearing the finish

After walking down the track for a couple of miles and past two shooting lodges we walked off the snow line and back to terra firma. On passing the second shooting lodge I noticed a lovely small pond, the first standing water we had seen on the walk. There had been plenty of water on the walk, running in becks or hiding in bogs for us to wade straight into but this was the first placid pond. Not wanting to dwell, my big toes were in pain through cold at this point, I carried on down to Nidderdale in the company of John and Sean and back to the car with Dave and Jez a short distance behind. By the time they got to the finish though I had my boots and wet socks off, clean dry socks on and the car heater on full blast. Relief!