Thorpe Satchville, Burrough Hill, Somerby and Burrough on the Hill

Summary: A lovely walk in the heartland of rural England, this splendid walk can be started from any of the three villages on the route. In the company of Ken Brockway we started our walk from Thorpe Satchville before following a country road and the field sides to the iron age hill fort on Burrough Hill where we took in the local view before following lovely tracks and lanes to Somerby, an ideal half way stop for refreshments. From Somerby we crossed fields and walked by a dry valley to Burrough on the Hill and from there across more fields and by more field sides back to Thorpe Satchville. It was a lovely day out. 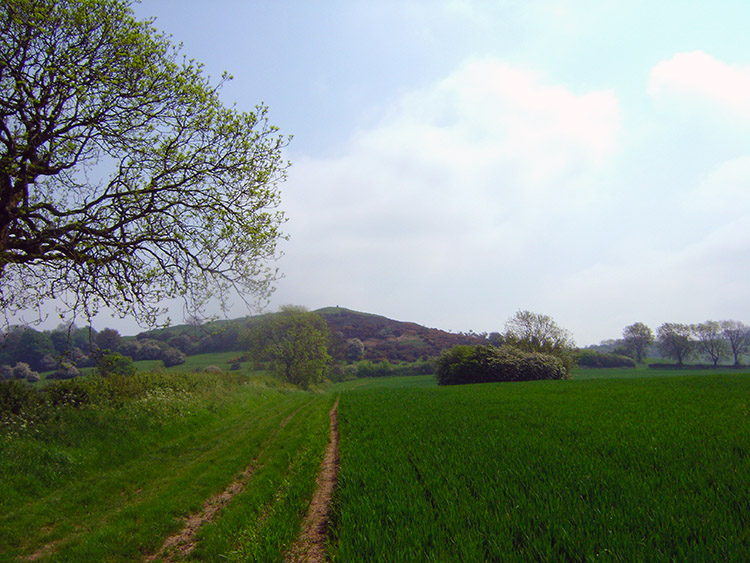 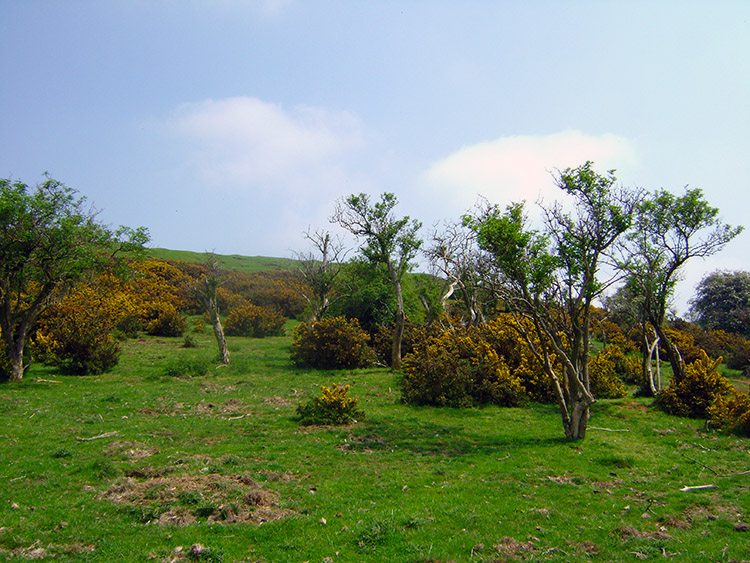 Ken had invited me to stay over with him in the Midlands, an ideal opportunity to take a walk in the Midlands instead of read one of Ken's excellent reports. Prior to my visit Ken sent me two choices, this one and one in the environs of Belvoir Castle. The more ancient one I thought, and at two miles longer a good stretch out for the legs after being penned in for a while during the awful weather we all endured in the UK during April 2012. Fortune favoured Ken and I; it was a lovely day to go out for a walk. We set off after parking up in a quiet lane in the village and followed Baker's Lane due east before leaving the road and keeping a course east down Salter's Hill. During this first part of the walk Ken and I tried our hand at identifying trees with the use of my trees identification book. Ken did not need the book to tell me a tree I puzzled over was Ash but we both struggled with less common ones. The evergreens we walked to later proved to be very problematic. For now we looked from Salter's Hill across the dip to Burrough Hill, our first site of attention during the walk. 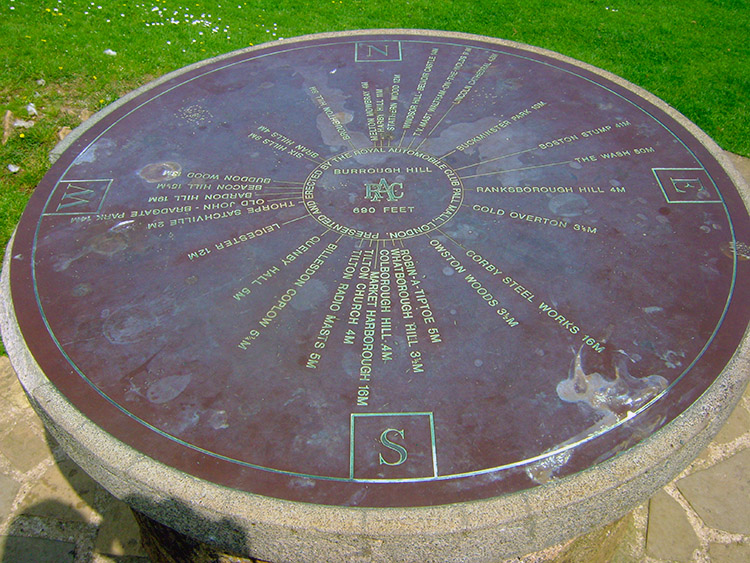 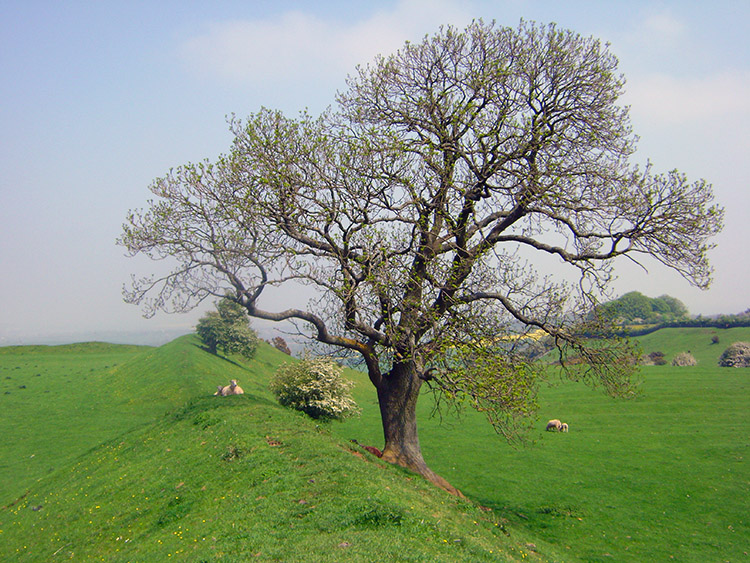 Trees on the raised boundary perimeter

We crossed Melton Lane running along the dip between Salter's Hill and Burrough Hill to ascend the hill to the site of the iron age hill fort. The ascent was taken gently, it was a hot spring morning and the sun was beating down as we climbed. We took a meandering route to the top through gaps between thickets of gorse. On the hilltop we arrived at an RAC observation point. Towns and cities like Market Harborough and Leicester indicated on the sign could only be imagined as the heat haze of the day already made distance views blur into the becalmed atmosphere. Distance landmarks like Lincoln Cathedral and The Wash were also only imaginations. Closer viewpoints compensated like romantically named Robin-A-Tiptoe, Whatborough Hill and Colborough Hill, all three being small but shapely hills in the rural landscape of Leicestershire. The hill fort itself was surrounded by a raised bank around the perimeter of the flattened hilltop that is except for an entrance way on its east side and at the highest point of the hill beside a trig point indicating height of 210 metres. Burrough Hill is the best example of a univallate hill fort (surrounded by a single ditch and rampart) in Leicestershire. Finds from the site date from the Mesolithic age, indicating the area has seen human activity over an extended period of time, however it is likely that a settlement was only created in the Late Bronze or Early Iron Age. Source: Wikipedia 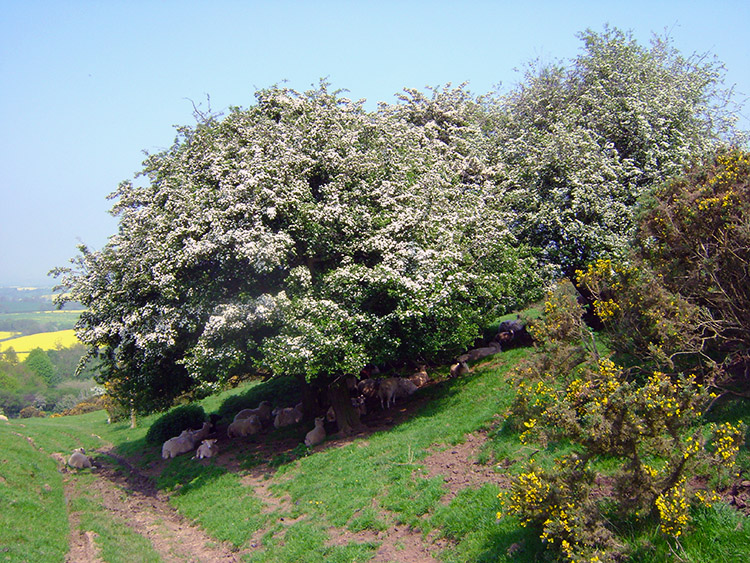 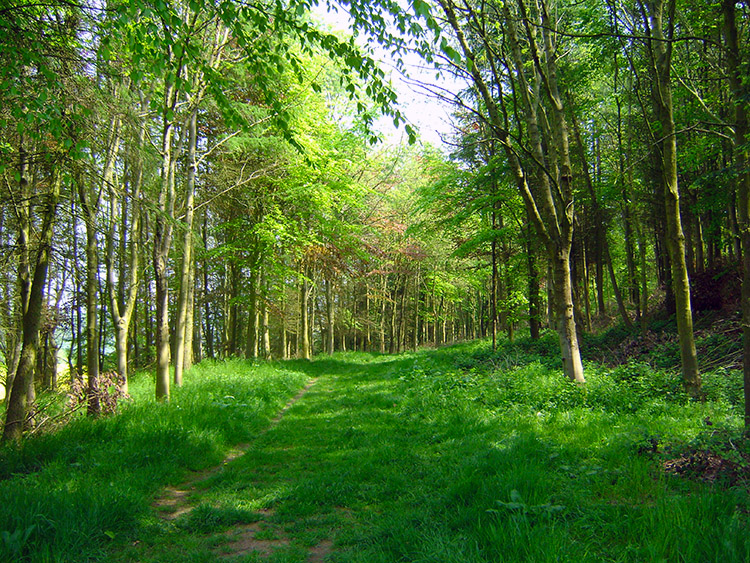 The views from the hill fort were magnificent and those early dwellers will have enjoyed plenty of notice of impending arrivals. The view to the north and west being the best with an unbroken view for many miles... except in fog, mist or hazy conditions such as the one we enjoyed on the site. Ken and I left the hill fort by walking north to Rise Hill Spinneys, woodland still enjoying the beautiful carpet of Bluebells and then by walking east along Jubilee Way and Leicestershire Round to Punch Hill Covert and Buttermilk Hill Spinney. On this section of walking we tried identifying larch and other evergreen by their cones. We were partly successful and learned there are many more types of evergreen in the UK than we first imagined. 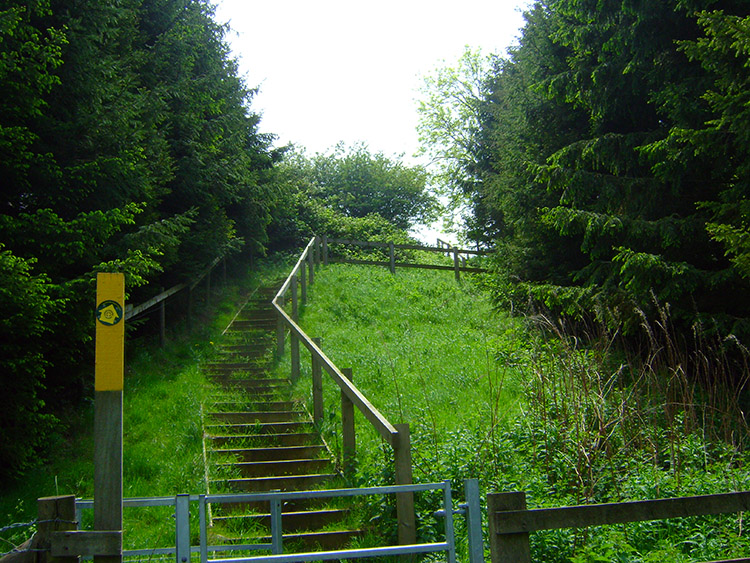 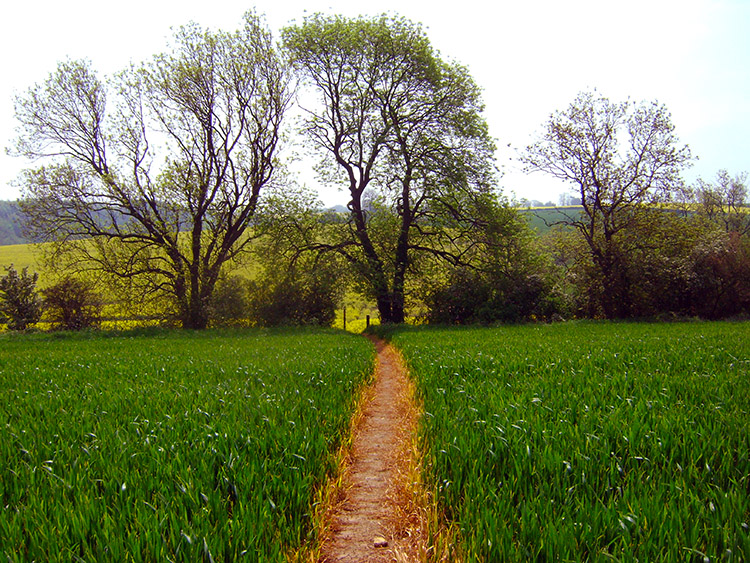 Clear path across the field

Ken mentioned a series of steps rising up Buttermilk Hill. "They were not here the first time I came" he said and added that it was sometimes a slippery climb up the bank in wet conditions before the steps were introduced. After our stepped climb up Buttermilk Hill we turned from east to south and continued across fields full of crops, a variety of cereals and Oilseed Rape. 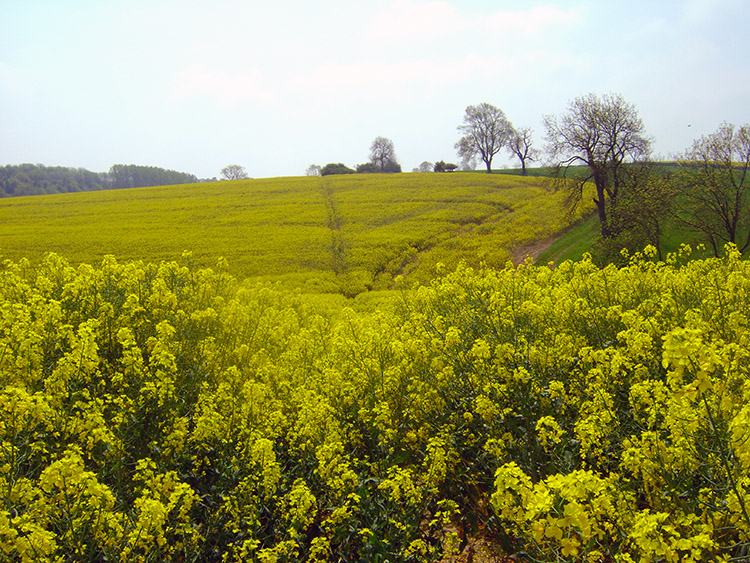 No clear path across this field so we walked round 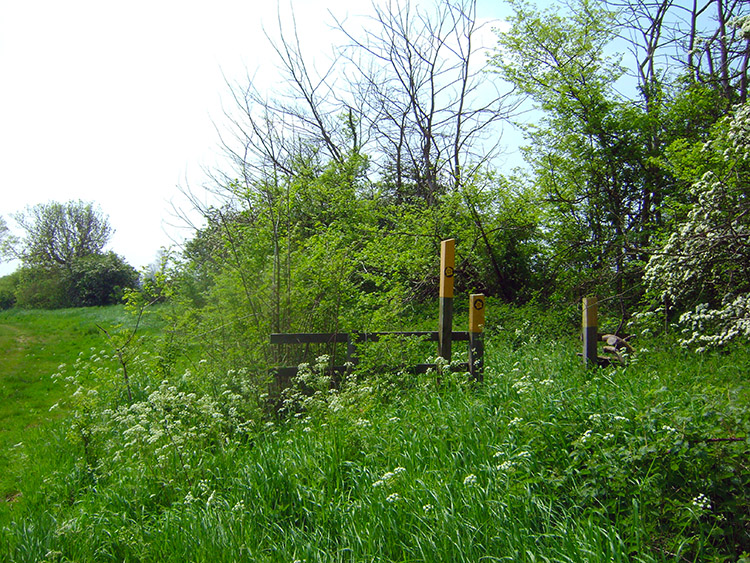 A stile of no use at all

Generally the paths made good across the fields were of excellent order but one that showed the right of way crossing an Oilseed Rape field had only been given scant regard. We walked around it, not such a diversion but adding a few extra steps to the walk. While walking the perimeter of the field we also came across a vain effort of providing a stile which was utterly pointless. It was surrounded by uncut grass and evidence showed everyone who walked this route walked past it. 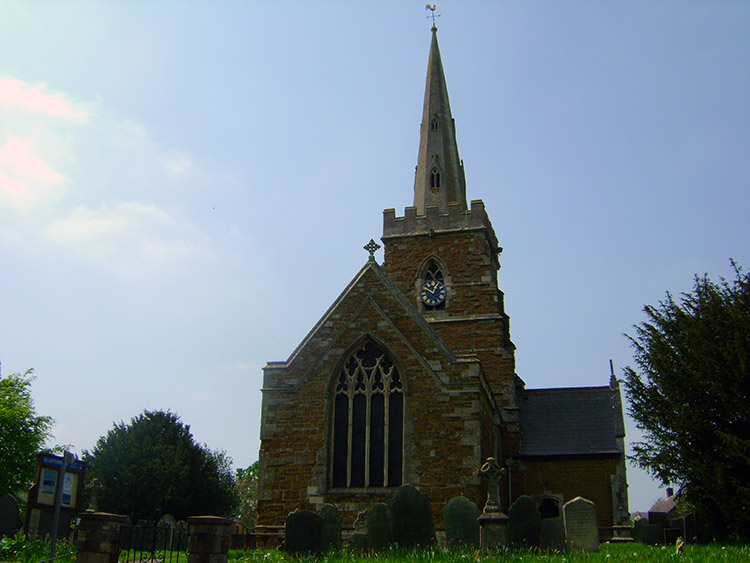 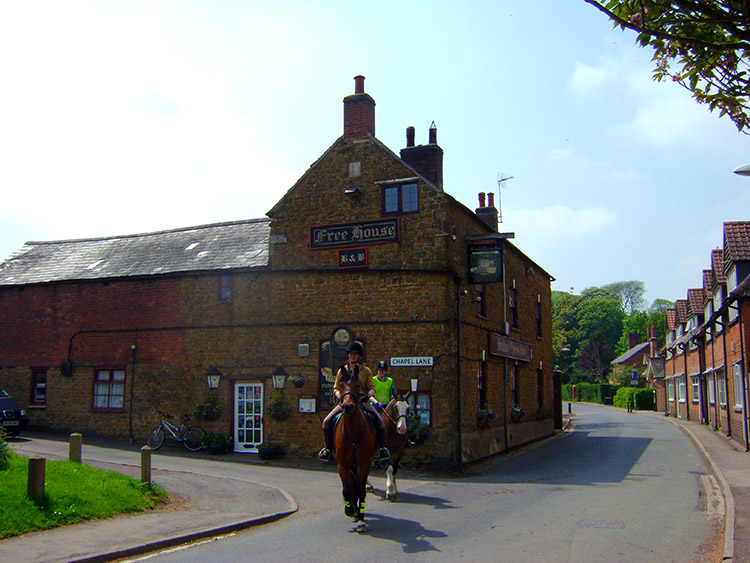 After a few more fields and a delightful section in a shaded copse down to a beck we walked into the village of Somerby. After a couple of hours walking, discovering and exploring on a hot balmy day we were ready for lunch which we took on a village bench close to Somerby Church. The village atmosphere was tranquil, not like during the second world war when some serious manoeuvres were planned in the locality. Apparently Somerby was the village was used as a base station and testing ground for Operation Market Garden, the airborne attack on Arnhem. A quite startling fact but then the countryside around the village is known as 'High Leicestershire' and a perfect representation of the Arnhem area.

No army manoeuvres for Ken and I though. After eating lunch we walked along the lanes through the village until we reached the Stilton Cheese pub where we stopped for a well earned pint. I don't usually drink during a walk, I save it for evening, but in Ken's company I was not going to refuse the offer of a pint. 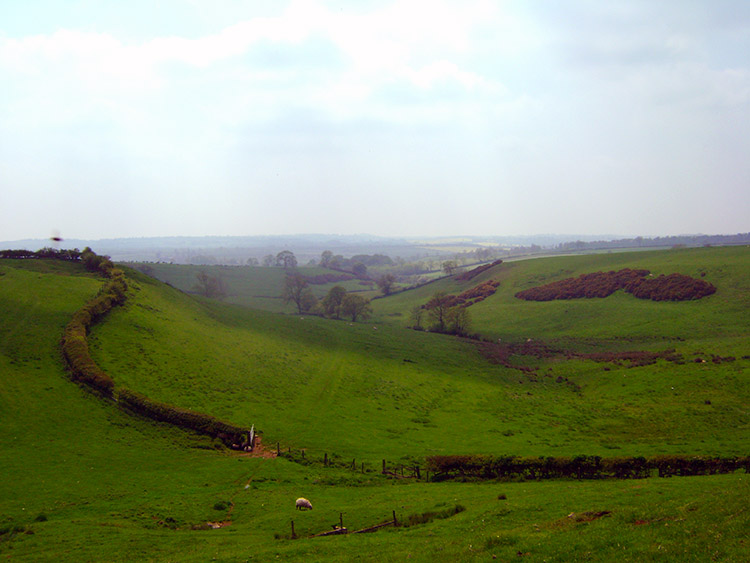 Dry valley near Burrough on the Hill 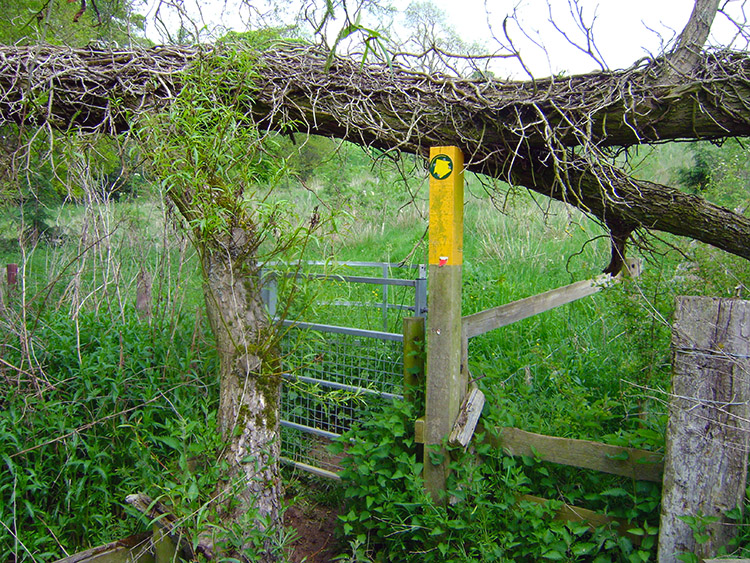 After leaving the environs of Somerby Ken and I continued on our rural adventure towards the village of Burrough on the Hill and not to be confused with the hill fort which is just one kilometer due north. As we walked to the village we had good views of the hill fort which we had ascended earlier. Between the two villages there was also an interesting valley dry of water and any evidence of a stream though the Ordnance Survey map clearly shows a watercourse near to where we stood. Between the villages we also came across a new gate which was not designed to be accessed while stooping. A fallen tree fortuitously fallen onto the indicator post permitted our passage through. 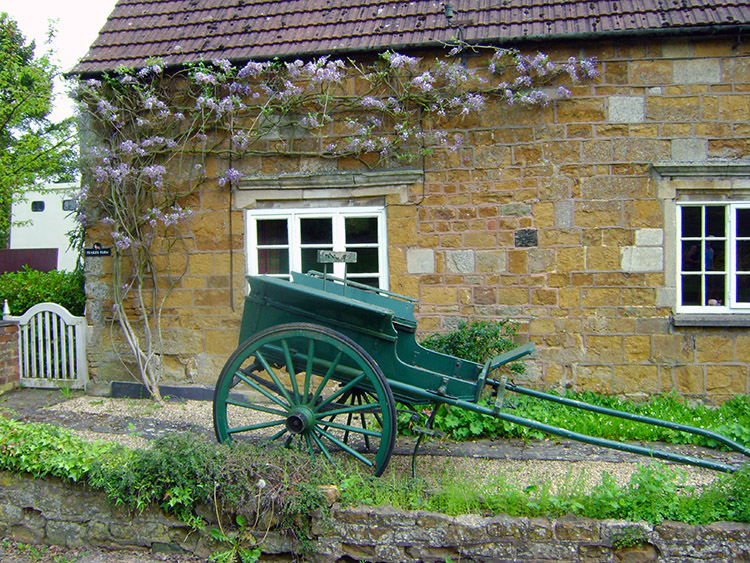 Old cart and wisteria in Burrough on the Hill 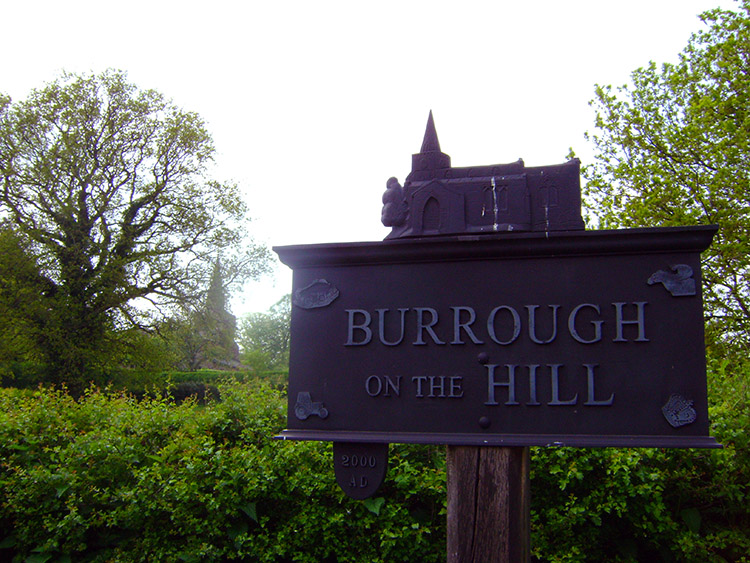 Burrough on the Hill, like Somerby was quintessential England, a quite rural haven much loved by its residents and appropriately well kept though an old cart parked up as a feature in a garden needs some TLC. Ken noticed the far wheel was missing. Like Somerby, Burrough on the Hill had a wonderful sign depicting the village church. The village has one commonality with lots of other English villages, that being a dismantled railway line. There used to be a railway station shared with neighbouring village Twyford, and was named 'John O Gaunt' at the village in between the two. Trains used to go north to Melton Mowbray, and south to Leicester and Market Harborough. John O Gaunt station was next to an impressive 14 arch viaduct, but both were closed to train traffic in the 1960s. 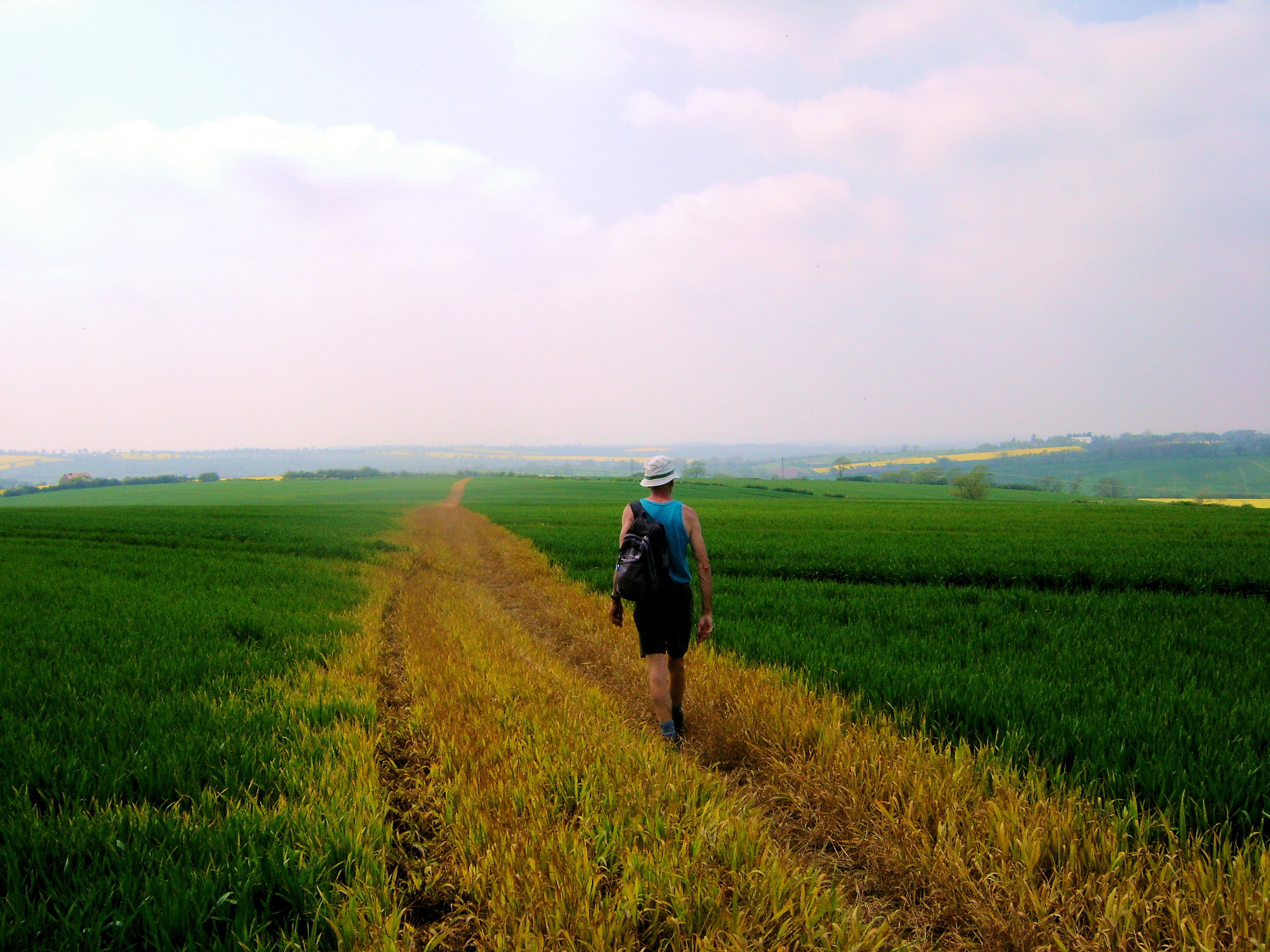 Ken crosses a large field on the way back 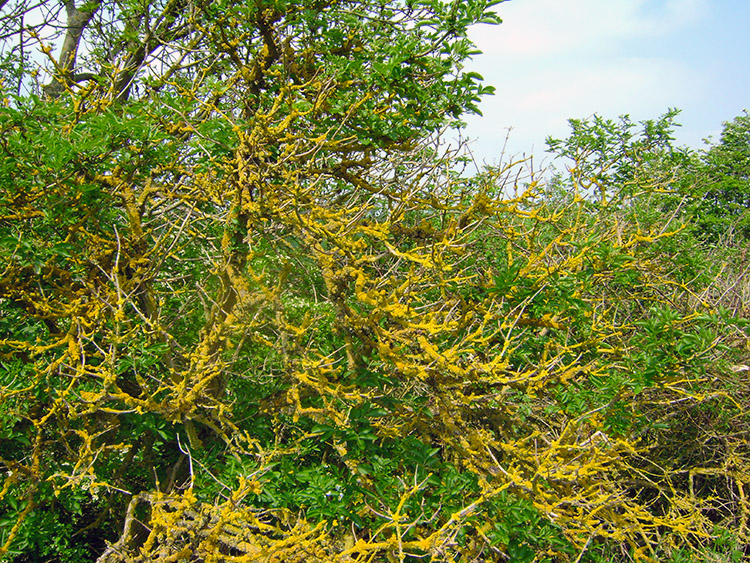 Ken and I set out from Burrough on the Hill and walked west across wide open fields to a lovely secluded copse just south of Adam's Gorse Farm. From the copse we continued west to cross the Thorpe Satchville to Twyford Road at the point where the dismantled railway used to cross. The raised embankment of the old railway line was clear to see as we tracked up a field back to Thorpe Satchville. 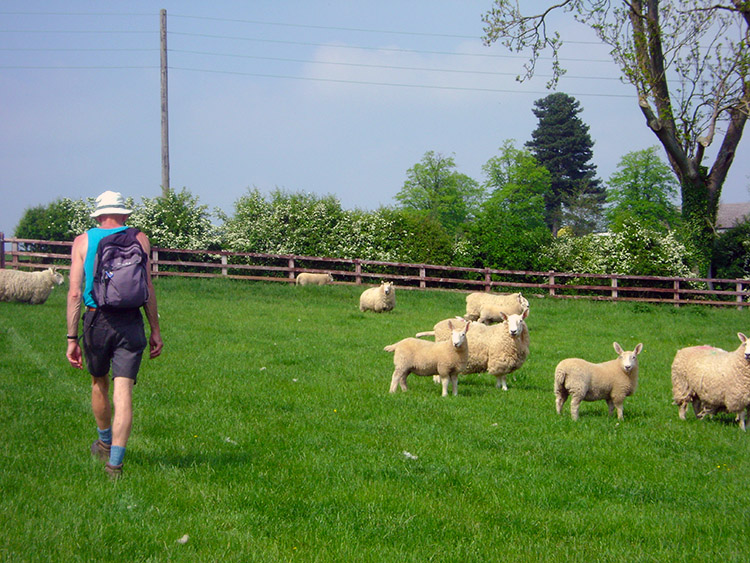 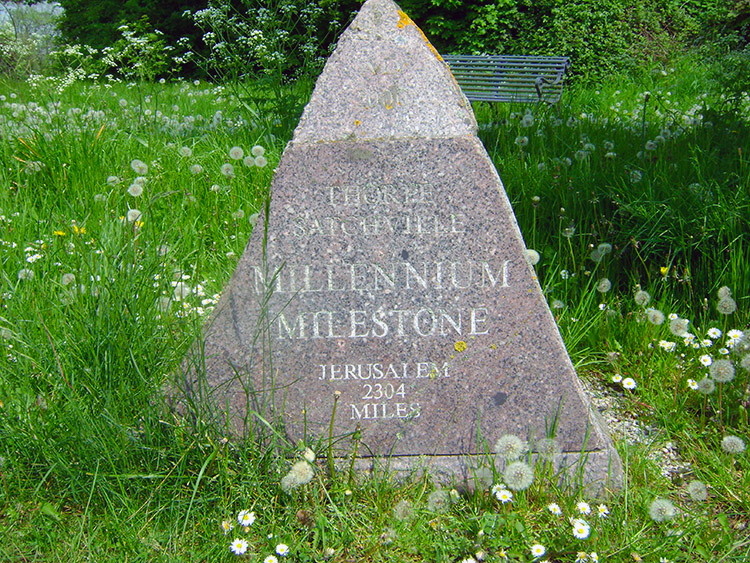