Summary: December 2010. The advice was not to drive unless it was really necessary. Well I can only stand so long stuck in doors, what I needed was a walk. The forecast for Friday had been unbroken sunshine but on Thursday they changed it to grey cloud. For once I was pleased they got it wrong as the day was spot on for walking, crisp underfoot with sunshine all day. We took the morning bus from Grantham to Bottesford for a linear walk of nine miles back to Grantham. The chosen route would be easy avoiding those hidden dangers of snow filled ditches. When the A52 bypassed Bottesford it left some minor roads as dead ends and these are now ideal for walking or cycling, in addition the old mineral railway line has become Sustrans route 15. Both offered traffic free walking. The majority of the walk however would be alongside the disused Grantham Canal which has been surfaced and is a very popular route for walkers with red socks or prams, cyclists and anglers. 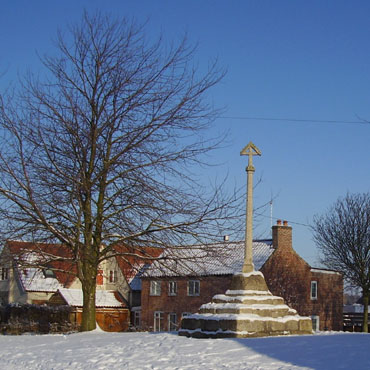 The town cross in Muston 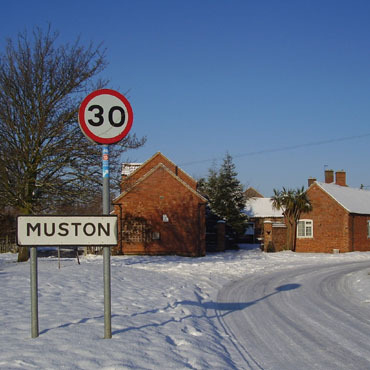 Leaving Muston to the east of the village

Before leaving Bottesford we indulged in a full cooked breakfast at the Deli on Queen Street which set me up well on top of the usual cereal before leaving home. To make best use of off road walking I started from Belvoir (pronounced beever) Road and joined the surfaced footpath to Easthorpe passing the The Victory Commemoration Hall. Originally a temporary wooden structure built in 1947, the old hall was extended and revamped many times until 2003 when a successful bid to the National Lottery enabled the construction of this splendid new building.

The road through Easthorpe was like glass but locals were driving with care and because four wheels was better than two legs on this surface, we progressed with due diligence. Turning into the Muston (pronounced musson) road we had the tarmac to ourselves. The snow in the centre of the narrow road still un-compacted was dry and powdery drifting like dust as our boots disturbed it. Dog walkers use this now dead end road and take advantage to let their pets run free, unfortunately the pet will sometimes show more interest in new friends than the call to heel from the owner.

Muston is a pretty village with some buildings of orange ironstone mixed with those of red brick and pantile roofs. The village cross, restored in Victorian times stands on a 14th century base. In finer weather there is a pleasant walk into fields first crossing the river Devon (pronounced dee-von) by a plank bridge then bearing left to emerge into the churchyard, opposite which the Old Forge tearoom is a popular haunt for passing walkers. 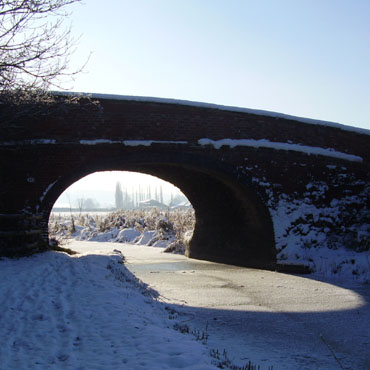 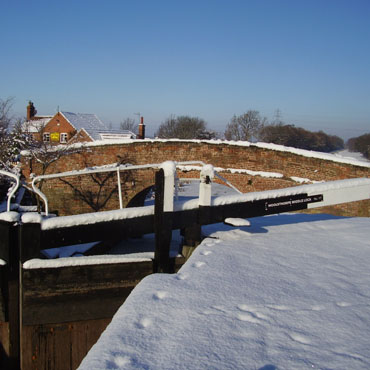 The Grantham canal was opened in 1797 and abandoned in 1936 so it has lain idle for over seventy years although not neglected as we will see. From its connection with the national waterways network by the river Trent at Nottingham the Grantham canal climbs through twelve locks then meanders around the Vale of Belvoir on the same level for twenty miles before arriving at Stenwith, where we join it. Here it starts to climb again providing us the added interest of water cascading through the lock chambers. 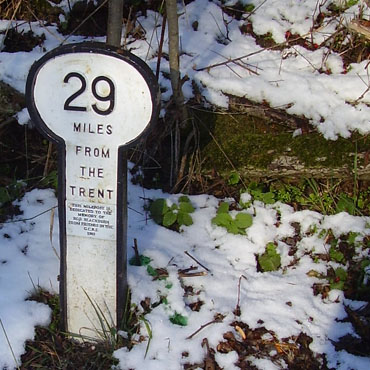 Milepost 29 a modern copy, note miles from the Trent 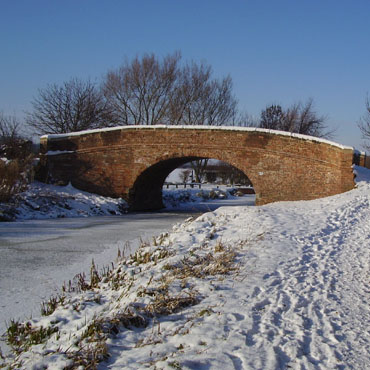 There are six locks along this stretch and the final three were restored some years ago. They look grand with their black and white painted beams but sadly they get little if any use for the time being, until the rest of the canal is restored. The Rutland Arms, known locally as the Dirty Duck, drew us towards it. While the door was open the lights were off but a call attracted mine host Bob Taylor who was happy to draw us a pint. Bob has kept the 'Duck' for forty years but may well be looking to retire soon, as he told us his landlord has recently increased the rent by a third.

Passing the last two locks the weather remains excellent but there are few other intrepid walkers about, perhaps they have all gone back to work today? Approaching Grantham the canal navvies had to dig a cutting, at first allowing the passage of only one boat, but later widened to permit passing. It was here that a Sparrowhawk swooped past us with prey in it's talons and landed unseen in the brambles on the bank. As we closed in it flew off and dropped a very dead blackbird in our path then perched in a tree watching us, as we watched it. A stand off, but the hawk lost and flew on yet again, so we continued our journey soon to be passed by the bird no doubt off to retrieve lunch. 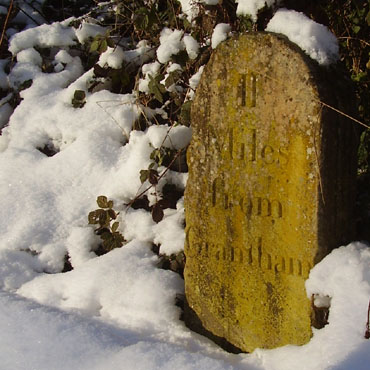 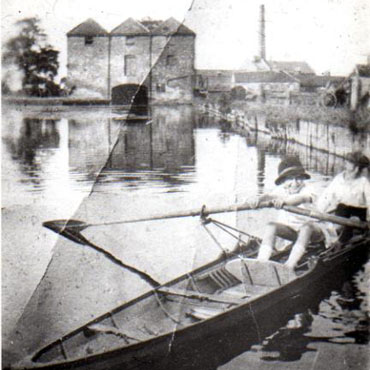 At the A1, when cycling, I take to the road but today we followed the canal first across Trent Road then to Earlesfield Lane where the route disappears under the council depot. Gone but not forgotten, Wharf Road in the town centre reminds us of the route to the former canal basin.

Digging in the many piles of useful papers stored at home I find the following extract from the Lincoln, Rutland and Stamford Mercury (first published 1713)

A general meeting of the subscribers to the intended canal from Grantham in the county of Lincoln, to the River Trent, is appointed to be held at the Angel Inn (still an Inn) in Grantham foresaid on Wednesday 9th January next at 11a.m. by order of the committee:
David Lely
Geo. White (Solicitor)
Grantham 4th December 1792