Summary: An interesting walk and much the better alternative to a trip around IKEA. The walk of just over six miles was surprisingly green and offered industrial heritage, wildlife and a hint of a literary connection. 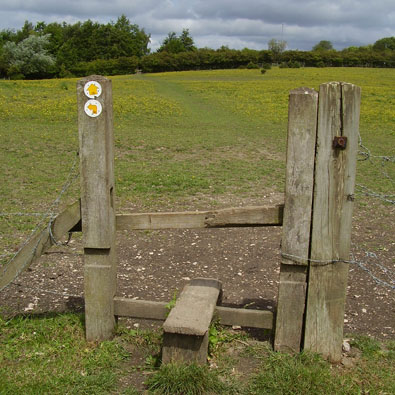 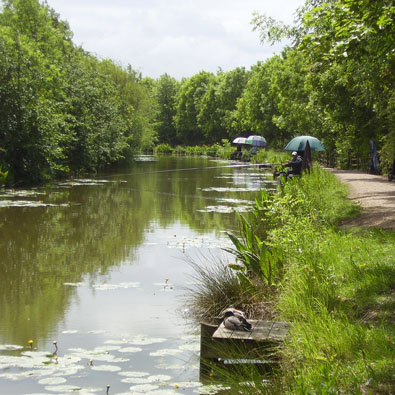 Having been cajoled into providing transport for a retail trip I had no intention of dragging myself around the shop. If I was to spend three hours walking then it would be in the open air. Looking at the map at the store location of Giltbrook near Nottingham first impressions were not good but zooming to the Explorer scale of 1:25,000 revealed a dense network of paths leaving me spoiled for choice. From early misgivings the day ends with both the shopaholics and myself all having a great half day out.

The walked of just over six miles was surprisingly green and offered industrial heritage, wildlife and a hint of a literary connection. I had planned the route missing out a suspect looking bit of path but as I escaped from the car park two serious looking walkers climbed a stile and assured me there was no missing link so I could revert back to the original plan. The walk alongside the store allowed a close view of those four huge yellow letters, I K E A which dwarf the escape doors on the side of the building.

These urban fringe walks can be difficult to navigate because, as I have said before, the locals create and follow paths of their choosing and here was another example, the section of path missing from my map was on the ground the clearest and most well used. I am soon out into that urban countryside of well grazed horse paddocks then after a mysterious abandoned wide concrete road the old Nottingham canal provides a pleasant waterside intermission. Anglers sit under their umbrellas, sheltering from passers by rather than the rain while coot, mallard, moorhen and heron are all attracted to this oasis. 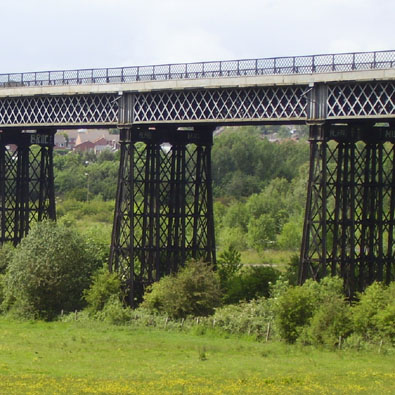 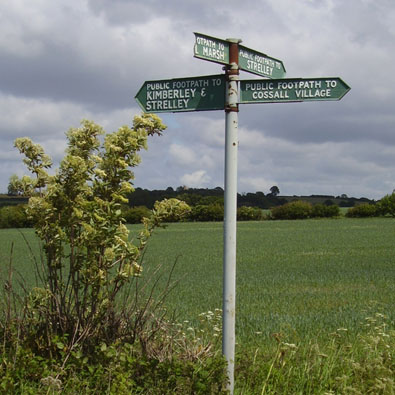 Through the hedge to my right I spot the Grade II* Bennerley Viaduct which once carried tons of coal along the Great Northern Railway's Derbyshire Extension, an incursion deep into Midland Railway territory. The huge steel lattice structure was built this way to reduce the weight of a brick or stone viaduct over unstable ground across the Erewash valley.

After the houses of Cossall Marsh, far posher than it sounds, the path starts a climb and over to the right is Cossall village church with the literary connection being the setting for Cossethay in 'The Rainbow' by D.H. Lawrence who was born in nearby Eastwood. The climb continues and the views to the west and south open up while the field has a real, if rather thin, crop of wheat. The background hum of traffic is ever present on this walk, along with houses, but just far enough away not to impose on this surprising open space so close to thousands of homes and families. 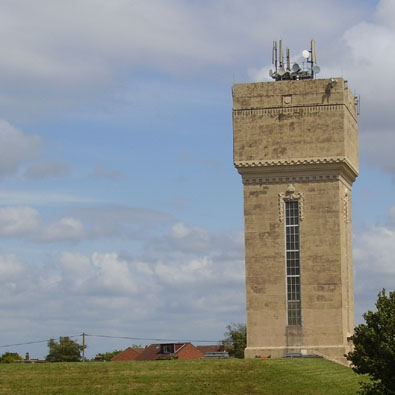 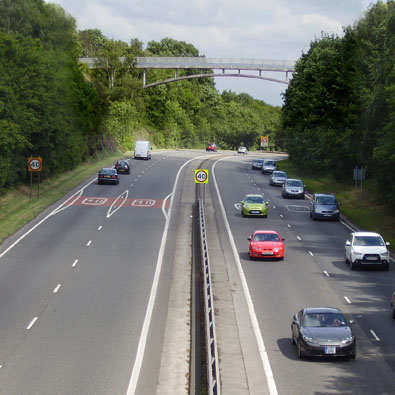 From the cross field path past Swingate Farm I pause to look south where Ratcliffe on Soar power station offers a marker for views into the Soar Valley and the hills of Charnwood. Winding around onto a lane I reach a water tower, built by the City of Nottingham Water Department, and the Kimberley television transmitter. Both take advantage of this high ground, only 134 metres above sea level but it feels much higher.

The Queen Adelaide Inn looks rather sad as does the White Lion, just around the corner. A sign of the times, both could be private houses on my next visit. Knowle Lane once connected to Larkfields but was cut with the building of the much needed Kimberly bypass. Pedestrians can still use the route and cross the bypass on a bridge also occasionally used by those whose life has no further use to them. Over or through the high balustrade to the east is a view of the Mapperley ridge some nine miles away and said to be the first bit of high ground for the winds that cross Europe from the Steppes of Russia. The Mapperley ridge is about 120 metres so I guess the wind in my face today just drifted over the top before it hit me here on the bridge. 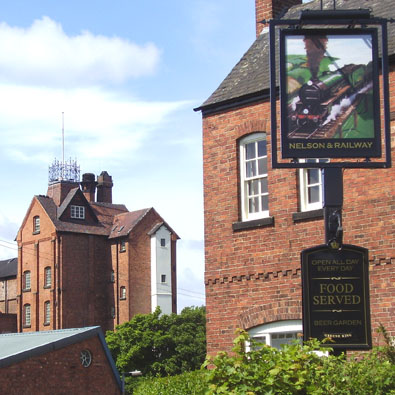 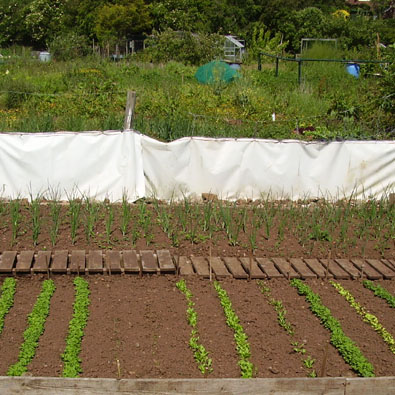 Moving on I took the path through the cemetery which is usually open but not a public right of way. Pausing by the Chapel of Rest I am invited to seek out Crich Stand on the horizon, nineteen miles to the northwest. Kimberley offers all the essential services for the housing that offered country living when the trams and later trolley buses operated by the Notts. and Derby Traction Company opened up the corridor from Nottingham to Ripley in 1914. On James Street is Mr Plumb's hardware shop where if it's not 'out the back' Mr P will get it for next week, a gem.

Buildings from both the old Great Northern and Midland railway stations remain many years after closure, the former looking smart and converted to homes while the latter, once a social club, is forlorn among the rambling complex of the closed Kimberley Brewery. Before the final mile I sample a pint of bitter which the pump clip claims is Kimberley Bitter, but I know it's now brewed at Bury St. Edmunds. The Nelson and Railway still defiantly flies the Hardys and Hansons flag from the front garden which is overshadowed by the now disused six storey brewery tower. Until 1930 there were two breweries here, side by side independent Hardy and Hanson. Read more here. 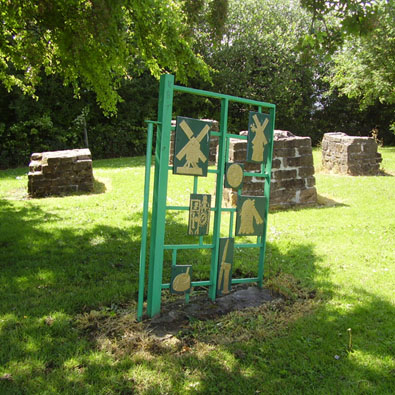 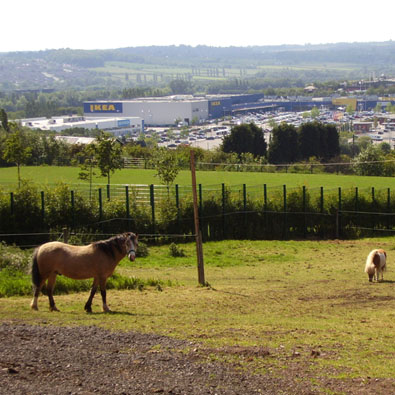 Taking a local path across the northern fringe of the park I join the Robin Hood Way, a long distance path linking Nottingham Castle with Robin Hood's Major Oak in Sherwood Forest. The path takes many twists and turns along the way to visit a good selection of popular sites throughout the county. The allotments on the path beyond Edinboro Row are well used and some gardeners align their produce regimental style in weed free beds. At the site of two former windmills, now a small play area for children, I wave goodbye to Robin but first make a small detour to peer down on the vast site that is the IKEA retail park which on high days and holidays causes traffic chaos in and around Giltbrook.