The story of a walk during lockdown

The Walk: (story by Ken Brockway)

Just a day after Derbyshire Police are criticised for being heavy handed and on the day Janet Street-Porter defends the right to enjoy the countryside. Are you sure you will be alright? I don't want you getting arrested, frets a loving wife. I had spent two days indoors partly because the weather had been so dreary but Saturday's forecast was sunshine. I planned two possible routes but both had the same start so I could make my decision later when the heart has started to notice I'm still alive. It was very tempting to take the car to the green fields avoiding the repetitive street walking, but unnecessary travel was banned so I hit the pavements for the first two miles. 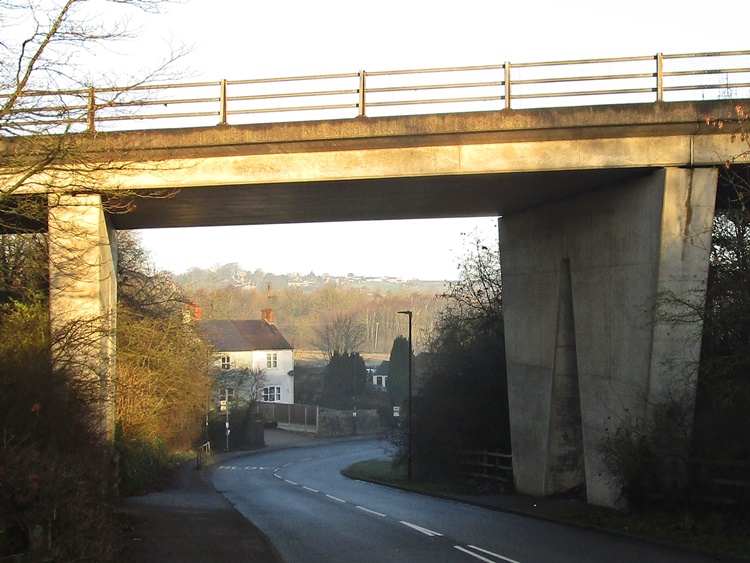 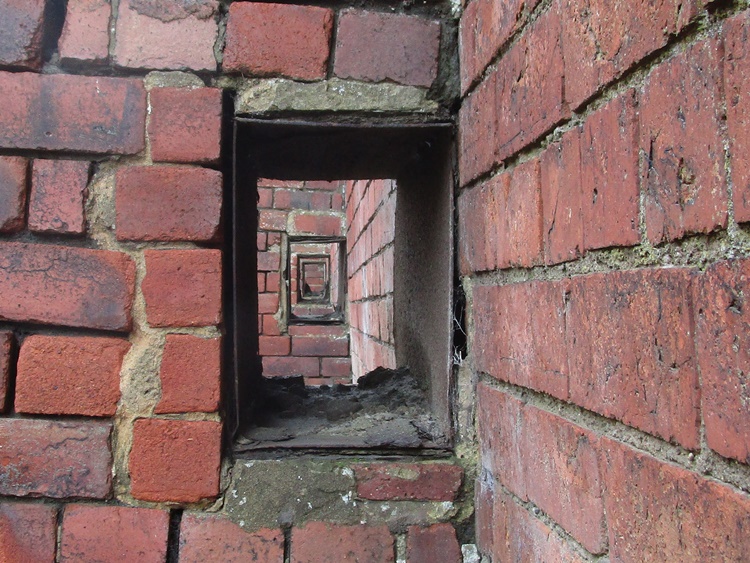 Mystery former use of holes

We are very lucky here because many of the settlement linking roads have a pavement. Not always the best place to walk but it's still fairly quiet and this back lane has little traffic and no people. Evidence of the industrial past is eventually left behind as I enter the village of Pentrich once the parish centre before Ripley developed. It was from here that the revolutionaries set out on their ill fated march to Nottingham, you would never guess from the gentility of the place today.

Take a little time to explore Pentrich and information about the revolution. It's difficult to imagine this pleasant sleepy village was once the centre of rebellion. It was also the parish to a large area including the town of Ripley as can be seen from the tomb of Henry Strafford of Ripley who died July 25th 1800 aged 70. There was no parish church in Ripley until All Saints was built by the Butterley Company in 1821.

The path from the churchyard is one of my favourites. It crosses the invisible Ryknild Street, the Roman Road from Derby to Chesterfield. This path offers wonderful views north up the Amber Valley towards the hidden Ogston Reservoir. To the west across Wingfield Park including Lodge Hill Farm, passed later. The Amber meets the Derwent at Ambergate then beyond that Alport Height and Wirksworth Moor provide an horizon. All within an easy day's walk. 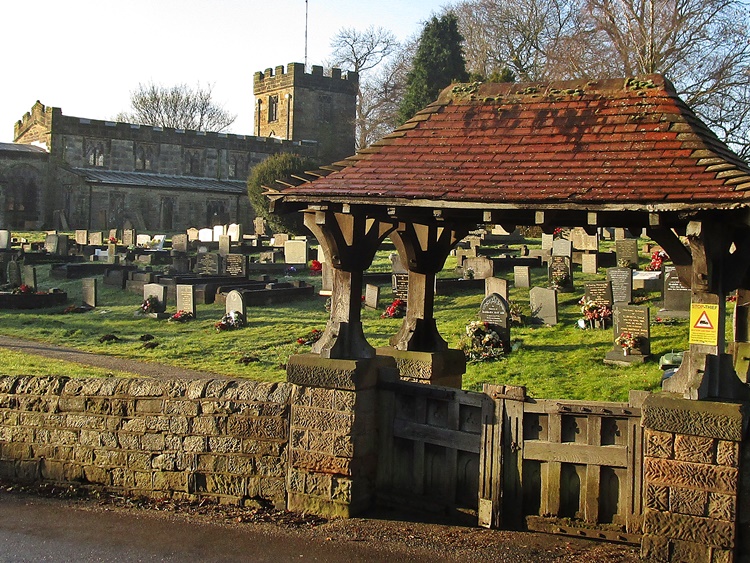 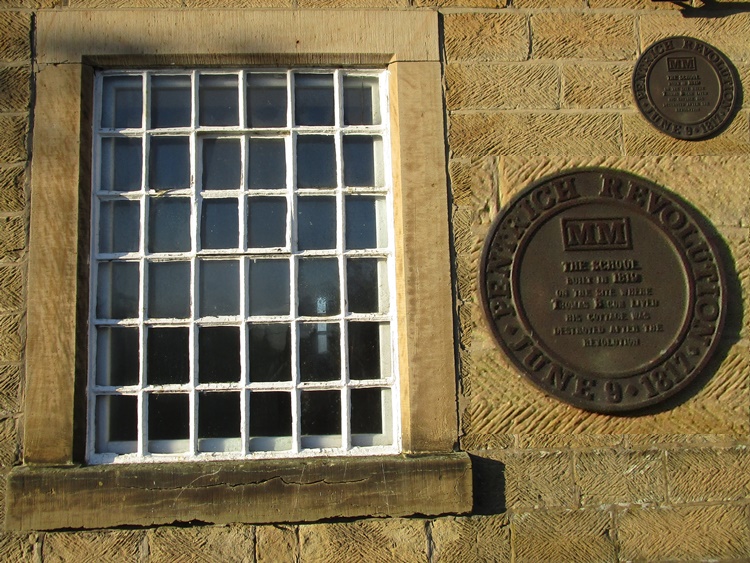 Planning for recent walks has two considerations. Avoid excessive mud and narrow enclosed paths. Leaving the village I enter real countryside but perhaps not field paths. A farm track offers easy walking and without having to watch where each foot is grounded I can admire the view. Having done a good bit of climbing the view is worth a pause. I can see my destination, that is the point where I turn and head back for home. No you can't see it in the picture, but I could. The weather forecast had, for once, been spot on. The sunshine was glorious and I soon had to pack a layer of clothing into the rucksack despite the frost still in the ground.

From the high ground there is only one way to go. The Romans walked this way between Derby and Chesterfield with the site of a fort just beyond where I left the ridge. The next crossing was the former turnpike road then down again to the river. It was the river and its valley that provided a route for the first real railway in these parts. George Stephenson surveyed the line from Derby to York and hit coal as he, not personally I assume, dug the essential tunnel at Clay Cross. This made or added to his fortune. Read more about it here. 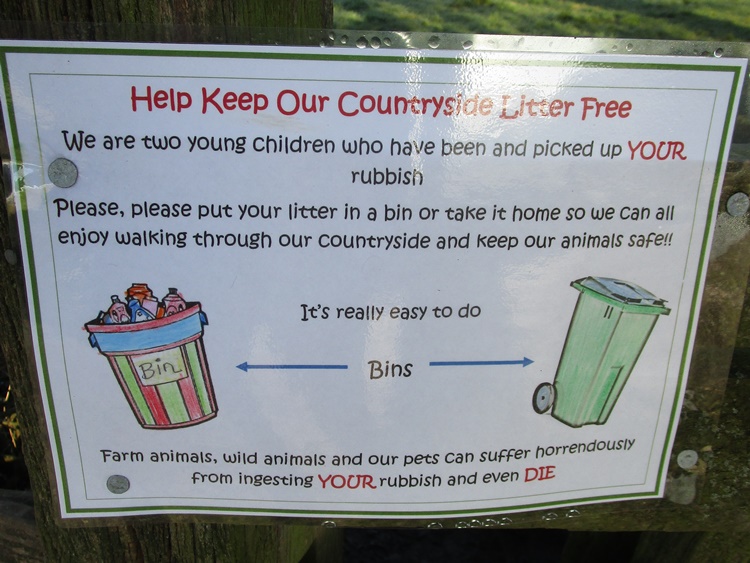 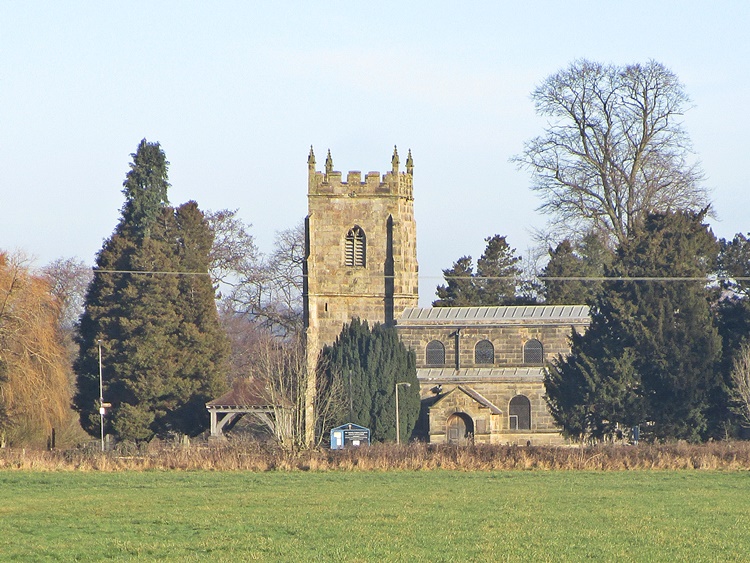 Another walk along a quiet lane then the road widens out. No cars parked here today, perhaps warned off by the police but clearly a favourite lunch stop. There was even a litter bin which I consider unnecessary. If the packaging has been brought here it can just as easily be taken away. A new typical solid Derbyshire footbridge offers a safe passage over a gentle stream. I meet a few other folk from here as I approach South Wingfield. Alongside the rail line where Network Rail have been felling timber to avoid that scourge of 'Leaves on the line'. “Are we nearly there mum?” Or should I say have I walked too far Officer. The Mill in the village is now a swish residence and the buildings alongside a busy animal feed supplier. This prompts me to wonder why Garden Centres are allowed to open when other shops are considered none essential. These out of town superstores are no attraction to me but on occasional visits I have found it difficult to find the plants among the many other items on sale that would have no place in my garden.

The road to the top of the village passes through a deep cutting and a right angle bend. The tall stone block retaining wall has many tie bars to prevent a suspected collapse at some time past. It's an impressive site that warrants a sigh of relief at the top.

I leave the dog walkers and car visitors behind, climbing again towards Crich and start to head back towards home facing the low winter sun. I had taken a packed lunch but knew the law prohibited me resting on a seat to eat it, well not within sight of the Covid Police anyway. I carry hand sanitiser but sandwiches don't taste the same after it's use and looking at the Garmin I could be home by 1.30 so ignored the tummy rumbles and pressed on.

Perhaps the best views of the Manor can be had in winter. It's a haunting sight which I admit I've tried to emphasise in the picture. It's also out of bounds most of the time, although I hear English Heritage do arrange open days. We have some good landmarks around here, Crich Stand is perhaps number one being visible from so many locations. Alport Height is another, blighted or perhaps highlighted by the mass of telecommunication masts on the summit. Wingfield Manor is the hidden gem that only shows itself from limited locations but find one, because it's well worth a look.

View towards Crich and Crich Stand

Park Head is a named settlement with very little to show for it. I approached it from the north some time ago and was rather surprised to discover I'd been here before. I suppose that's what comes of navigating with the tiny screen of the Garmin. I fail to see the bigger picture, still those sort of surprises are fine.

Culland Farm is getting a major makeover. I spotted the work last time I passed. Today the sun was wrong and I could see very little except when I crossed the brand new drive being cut through the fields. That must be costing thousands so I dread to think what is going into the dwelling. Signs on gates make clear we are not welcome to stray from the path. I do hope we will not be fenced in to enforce the prohibition.

I enter a short section of delightful woodland path. Trampled leaves mark the well used path and the sun shines through gaps in the trees creating patterns of the ground and penetrating through to light some trunks and branches. A beautiful picture which I attempt to capture with the camera and add to this report. But I fail, I should have known, I've tried this before without success.

Leaving the wood and another slight climb to the site of a former windmill. The tree isn't growing out of the tower remains which are never the less pretty crumbling. The path passes close by and offers more good views including that of Ripley, not too far away now.

I'm now on regular walking territory. This path features in one if not the favourite walk from home. It crosses Wingfield Park an area that avoided despoiling by the industry that developed to use local natural resources, coal, iron stone and lime. These all left behind their spoil, no planning authority or Environment Agency to make the polluter pay.

The River Amber which gives it name to the local authority and the once famous three sided station at Ambergate rises near Ashover. It's no longer allowed to flow freely to the Derwent, first it must be diverted to homes in Chesterfield from Ogston Reservoir. Today the river is placid but it's not always like that. When the reservoir is full the water fights to pass under the narrow footbridge by the old watermill.

Another gentle climb from the valley back to Pentrich. I'm pleased to see action has been taken on my report of a difficult stile. An extra rail had been nailed across the top making it a fence not a convenient boundary crossing. The top rail has now been removed making human passage much easier. It may also allow sheep to escape, we will wait and see. This old chap says a gate would be far better. 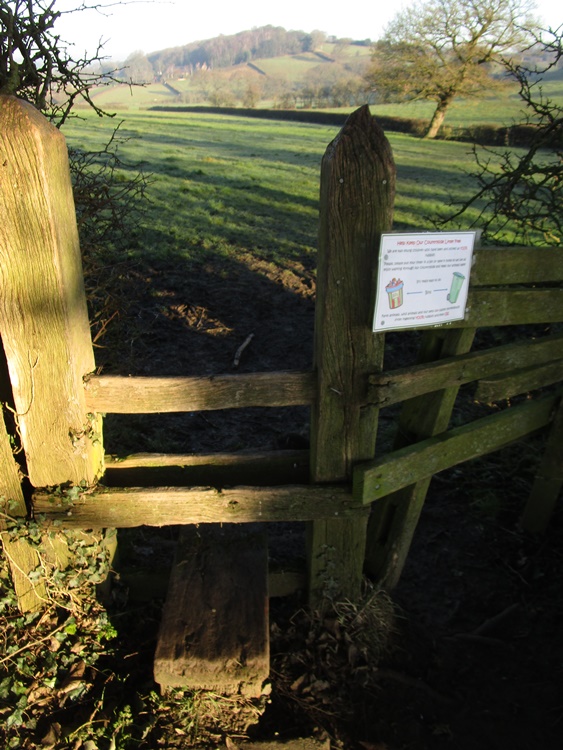 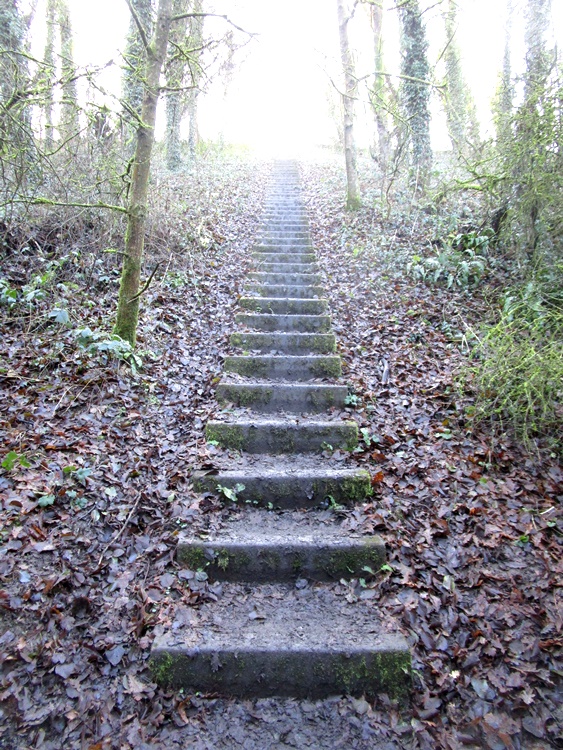 The approach to Pentrich is through the churchyard but first I should mention the invisible crossing again of that Roman Road. Well there I've done it, what more is there to say? I could return along the road, retracing the footsteps of this morning but I like variety. There is a path I've used in the past, but not now. It's narrow and enclosed by thick hedges. No escape to keep my distance if I meet someone.

The alternative is pleasant down a field where father or grandfather has constructed a long aerial rope slide. I've never seen it in use, perhaps the child it was made for is no longer a child. The path leads to a private road easy mud free walking but plenty of private signs to discourage roaming. Next the old canal towpath which can be a bit wet whatever the weather. Another cheer, for the rights of way team. A tree across the path that I reported has been removed. The canal navvy in me wants to get stuck in and remove all the fallen trees from the water filled canal. It could look so much better, but the boats would still not travel far because the tall embankment of a road now blocks boats and walkers while it allows traffic to speed on it's way to Matlock and the Peak District. The highway planners did make a small gesture to those on foot they created steps, lots and lots of them, so that we could huff and puff to the top of the hill.

I'm almost home but it's a busy noisy road to walk alongside on the alleged safety of a pavement. Where are all these folk, told to stay at home, going? Not many people know this. Or more correctly, not many people see this. A plaque fixed to the side of the flyover. Even I had driven this way many times before I spotted it while walking. It adds a little bit of interest to an otherwise less than enjoyable section of what has been a great walk.