Summary: Walk from the edge of the North York Moors to the ruins of Byland Abbey. After the abbey climb through Abbey Bank Wood to the moors plateau. Fields, tracks and more woods are walked to Sutton Bank. From here the views are superb as you follow the Cleveland Way footpath past the Gliding club to the White Horse before descending the hill and walking back into Kilburn. 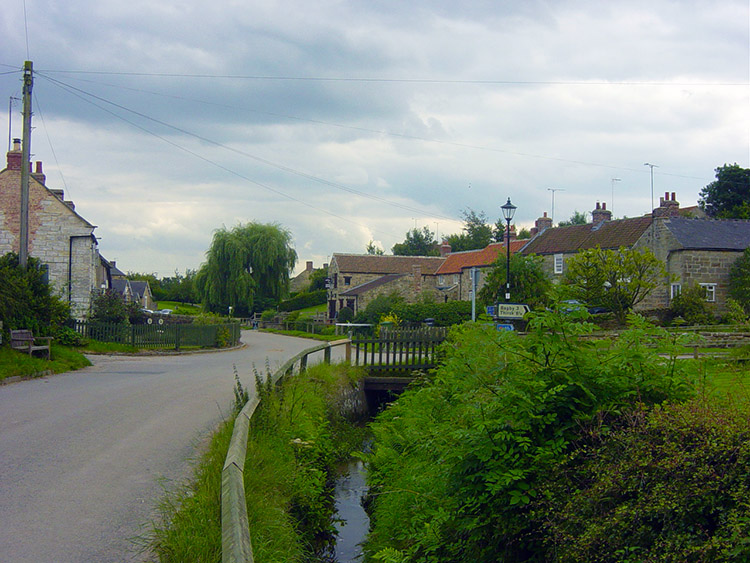 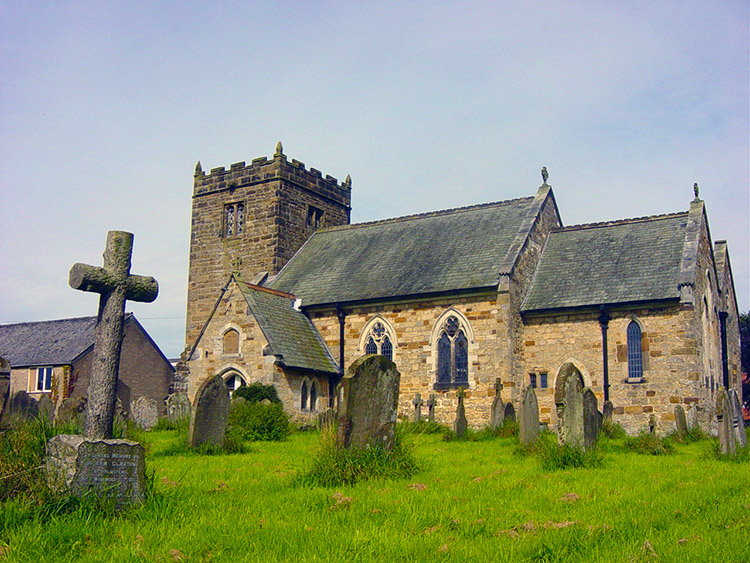 The British weather in August 2004 was diabolical to say the least. It is in August when I expect to walk at least once a week if not more. The days are still quite long and it is nearly always warm, but not this year. It was the wettest August for many years and many places had been flooded, the most notable being the Cornish village of Boscastle where the villagers had to be evacuated during a severe thunderstorm. Yorkshire had been hit nearly as bad with lots of places suffering flash floods. It was not a good month for walkers at all. How we suffered. And so, after hearing about a break in the weather I jumped into action and called Dave. "Fancy a walk" I said. "Yes" he immediately replied. I drove over from Leeds to Harrogate and picked him up. We drove from Harrogate to the west edge of the North York Moors at Kilburn near Sutton Bank in Sunday morning sunshine. I had planned the walk almost three weeks ago, a walk to take us from Kilburn to Byland Abbey then to Sutton Bank and back to Kilburn. I did not expect it to be so long before I did the walk. On our arrival at Kilburn it was a relief to put the walking boots on again, almost a month since the last time it was decent enough to go walking. We wasted no time in getting going. 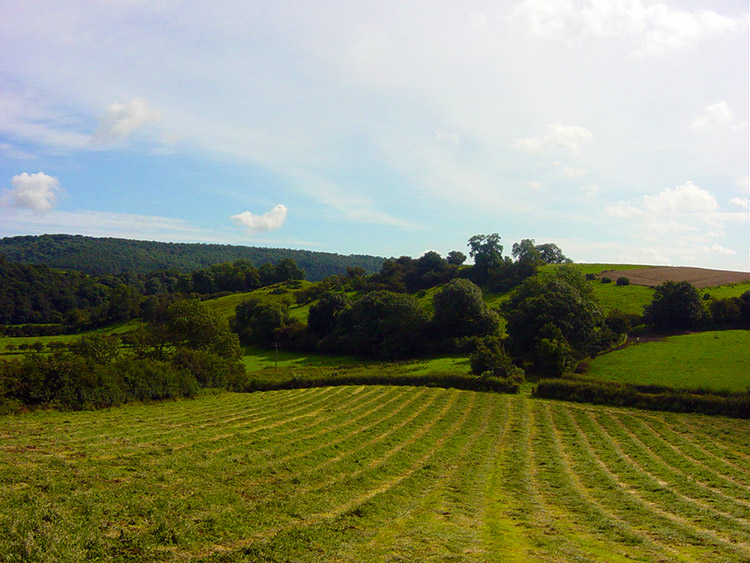 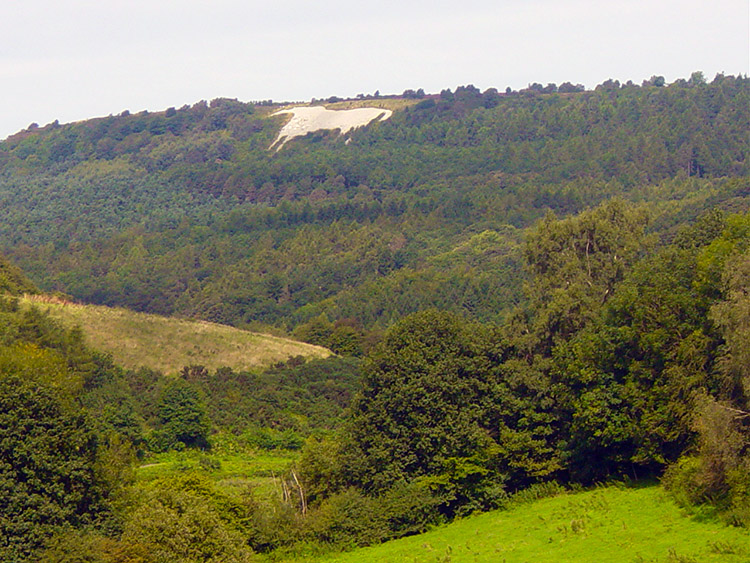 View of the White Horse from High Kilburn

Although it was a warm summers day with the sun shining down the recent weather had really soaked the ground. We walked through lush wet grass as soon as we left the village of High Kilburn. We made our way in the wet underfoot conditions towards the hamlet of Oldstead. At one point we reached a gate which I had difficulty opening. I just did not see the safety catch but trusty Dave was there to rescue me. My dilemma amused him, it also amused me! 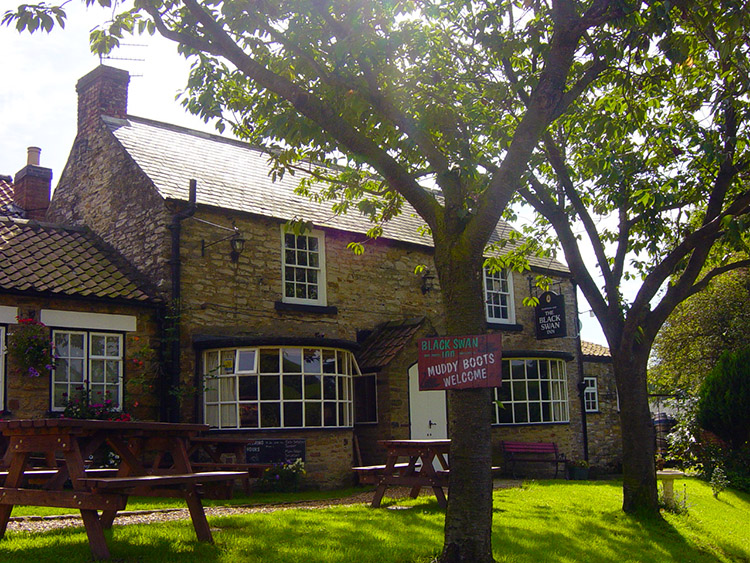 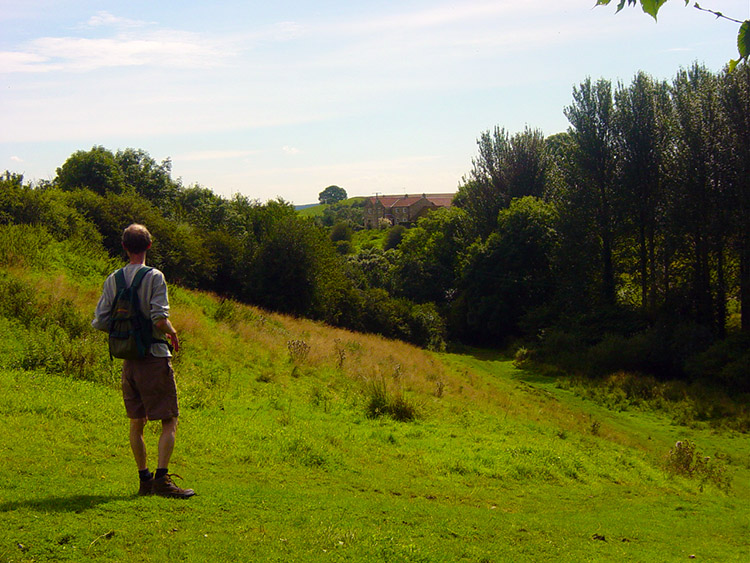 At Oldstead we followed a road for a while and passed the Black Swan Inn, It had a sign saying 'Muddy Boots Welcome'. A nice sign for walkers to see but it was too early into the walk for us and we walked on. Soon after the pub we left the quiet road and followed tracks to Oldstead Grange and Cams Head. During this section Dave got the grumbles about work out of his system. He was felling better for that. The subject changed after Cams Head to the topical harvest dilemma for farmers. 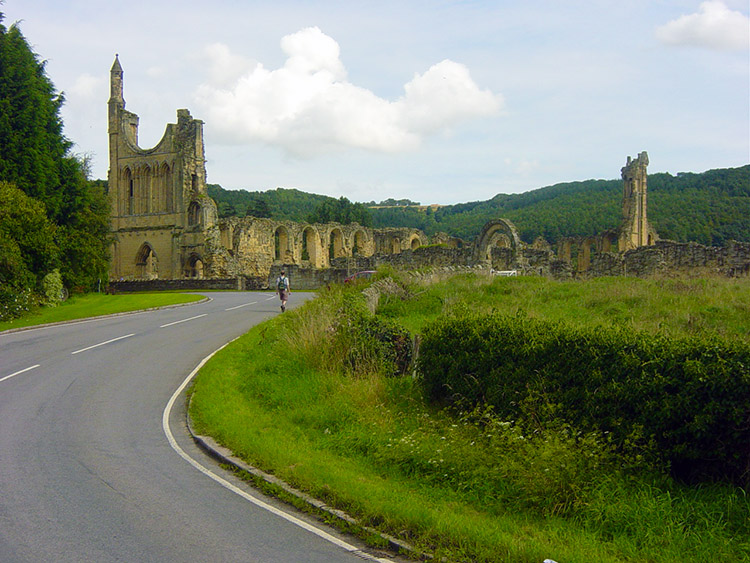 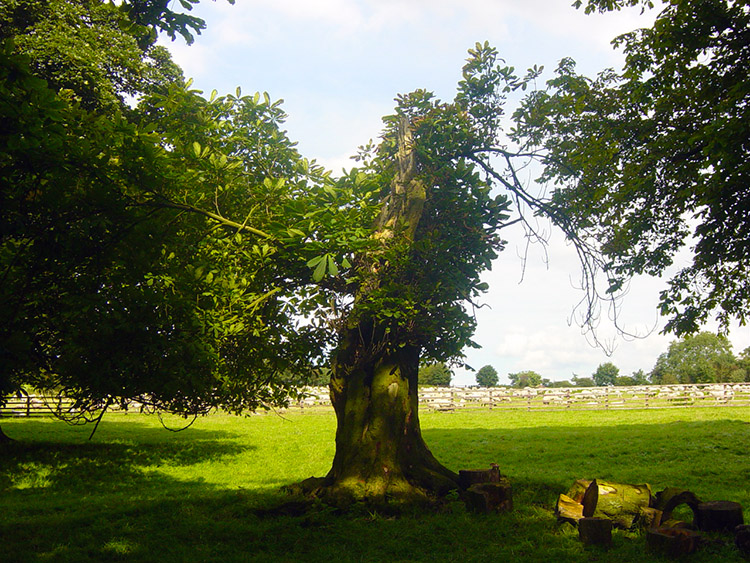 We walked alongside a wheat field which looked very poor. The rains have devastated the crops this year and in this field it was plain to see the damage. We sympathised. More expensive bread soon no doubt. After the wheat field we soon arrived at Byland Abbey and took lunch on a bench near the ruins. Dave had been in good form on the walk so far, no doubt as grateful as me to get the opportunity in the recent awful spell of weather. Things were soon to change. 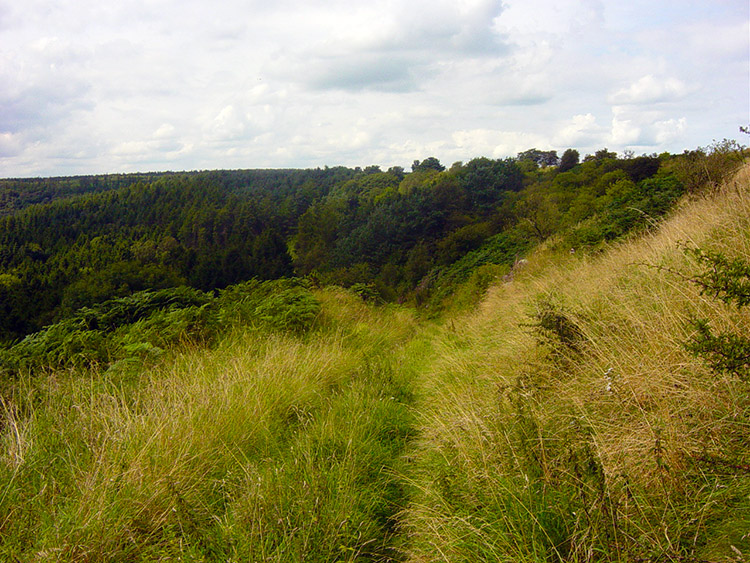 Apart from an initial short climb the walking to Byland Abbey had been level or downhill. Now it was time to work as we faced a stiff climb through Abbey Bank Wood. Soon after we had started climbing Dave began to fall back and then soon after I heard him call to me. "I'll have to stop for a second, my legs in agony" he said. He explained that as soon as he starts a climb the pain comes on, only when he is climbing. On the level and downhill he is fine but recently he has had a problem going uphill. To his credit he did not complain much at all and struggled on the uphill sections at his own pace. I know he will get it sorted. 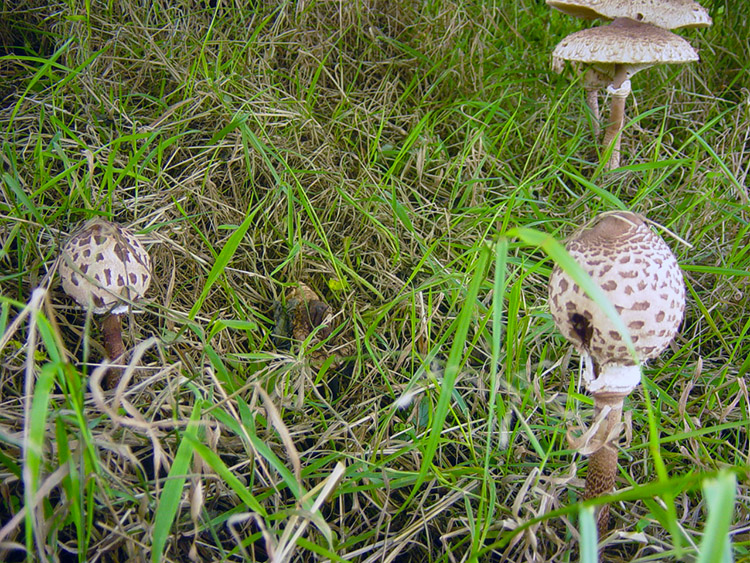 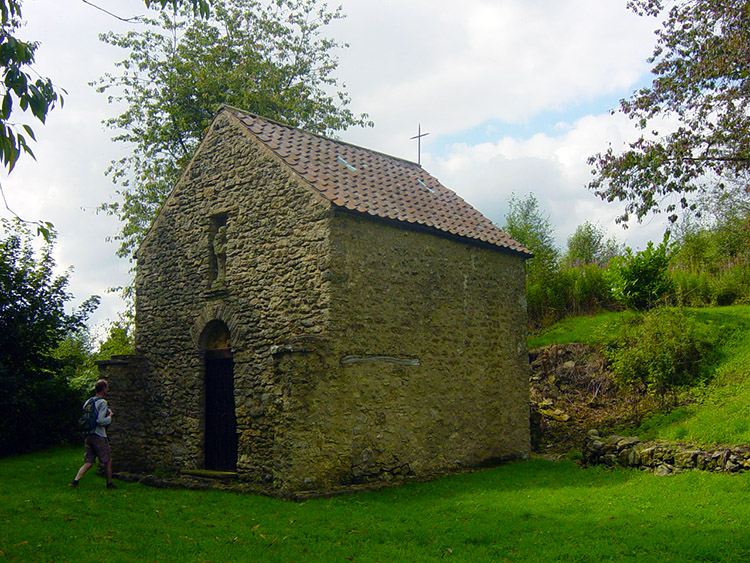 The secluded church at Scotch Corner

It was really boggy in the woodland because of the recent rains and at times we had to straddle the path to get through. Soon later we left the wood and crossed open land to Cam Farm. This was a nice section with lovely views over towards Sutton Bank and beyond. we enjoyed this part before we dropped down again into Great Cockerdale Wood. the walk through this wood was fantastic (and drier) as we followed a well marked trail down to Cockerdale Farm. The farm sits in a beautiful secluded closed valley. 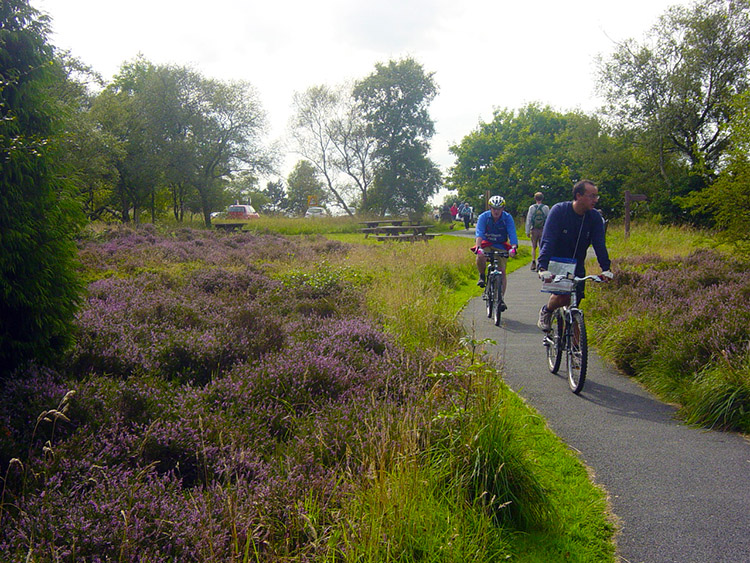 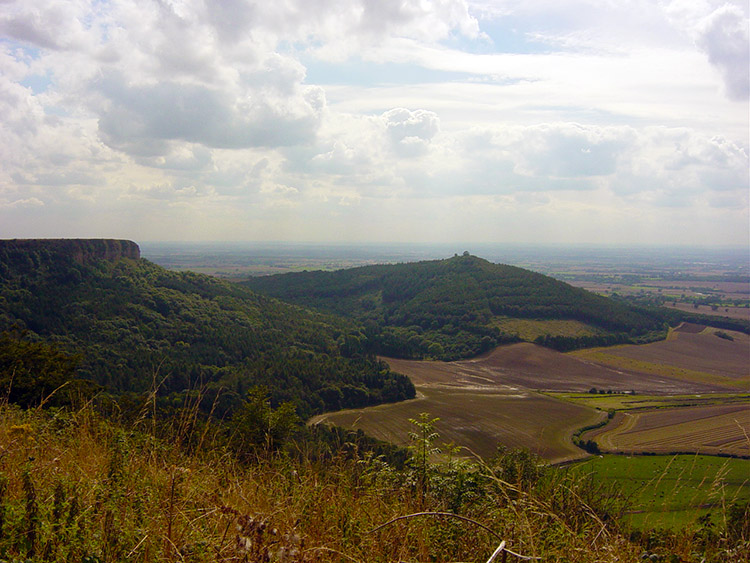 After Cockerdale Farm we climbed to Hell Hole. When we got to the edge of the woods we came across some beautiful Parasol mushrooms. I don't think I had ever seen the type before. Then we walked through our third and final wood and arrived at Scotch Corner. Here there is a tiny church. We stopped and explored the grounds for a while before moving on along tracks and roadsides to Sutton Bank. 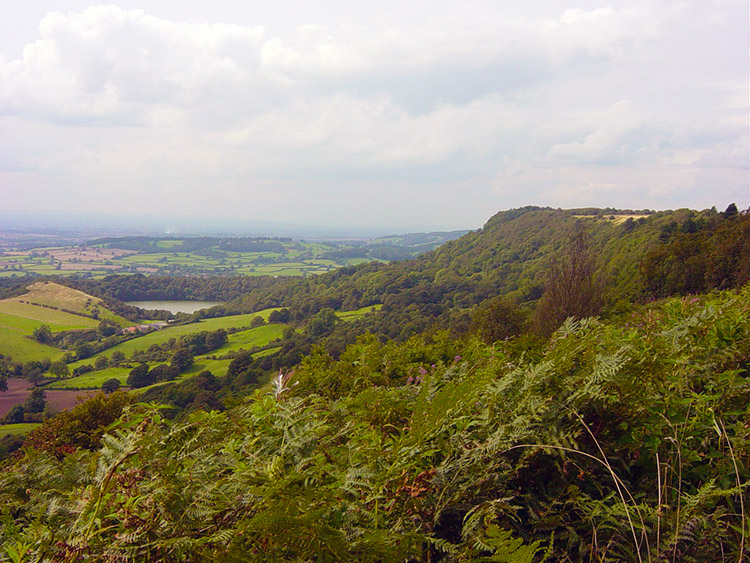 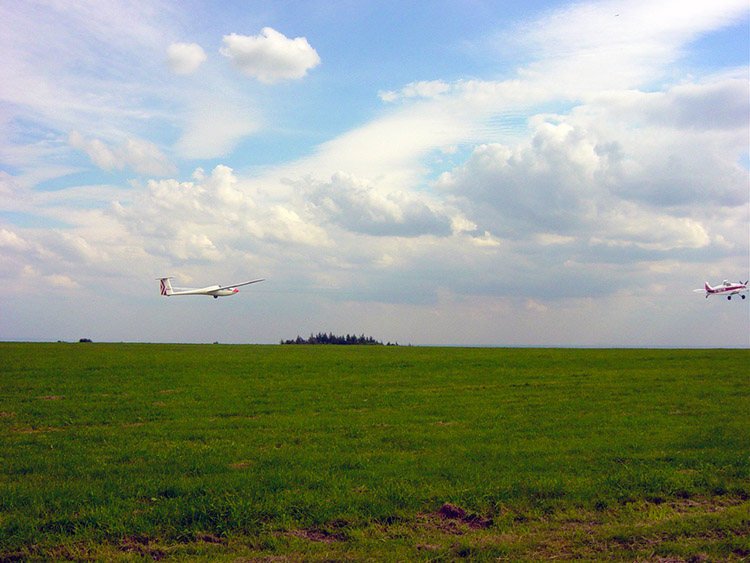 At the Sutton Bank centre we stopped for coffee anticipating the grand finale. And what a finale it is for we left the centre to follow the Cleveland Way on the edge of a long escarpment which affords the most spectacular views. After the quiet solitude of only each others company we were in crowds now for this section of the walk is very popular. We did not mind for the breathtaking views we were taking in are special and to be enjoyed by all. 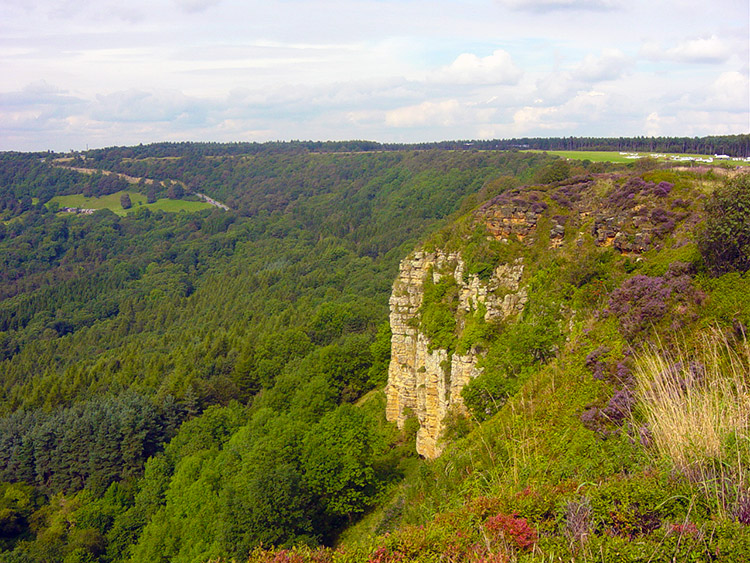 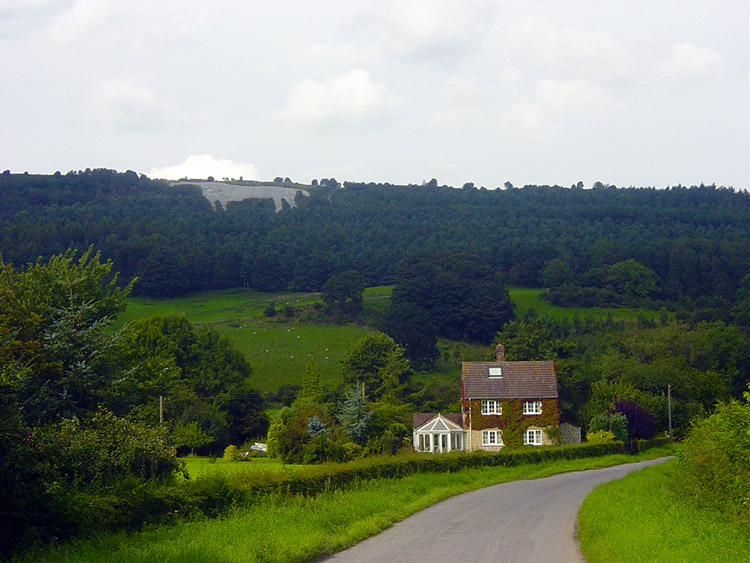 Looking back at the White Horse

We ambled along the 2 kilometre section to the top of the White Horse in bliss. We were in no hurry. All too soon, as it is when you are enjoying yourselves we were above the horse and descended down the steep path to the bottom of the chalk steed. after gazing on it for a while we moved off down the road and back into Kilburn. What a great days walking we had just had. Really, really good.