Summary: This walk in the gorgeous rolling Howardian Hills involves a complete circuit of the Castle Howard estate. During the walk a series of woods which are diverse in character are walked through and several lanes beside arable fields followed. Also on the round a series of spectacular Castle Howard buildings are visited or closely walked by including a temple, mausoleum and pyramid. Also, early on in the walk, the pretty and unspoiled village of Coneysthorpe is visited.

The Walk: A wonderful warm Spring day was dawning, one that would help the trees bud into life. It was mid April and while the Crocus were finished and the Daffodil past their best the giants were reluctant to show their coming. The smaller shrubs and trees like Gorse and Hawthorn were in blossom already but the big ones needed a little more encouragement from the sun. Today would help. It certainly helped me make my mind up to go for a walk and this one had been on my mind for some time. I had done part of it before, over 10 years ago when I had been living in East Yorkshire. I had not taken a camera that day and much as I enjoyed it I had not captured the lovely views I saw that day for you. So belatedly here are the images to accompany the story of my revisit. 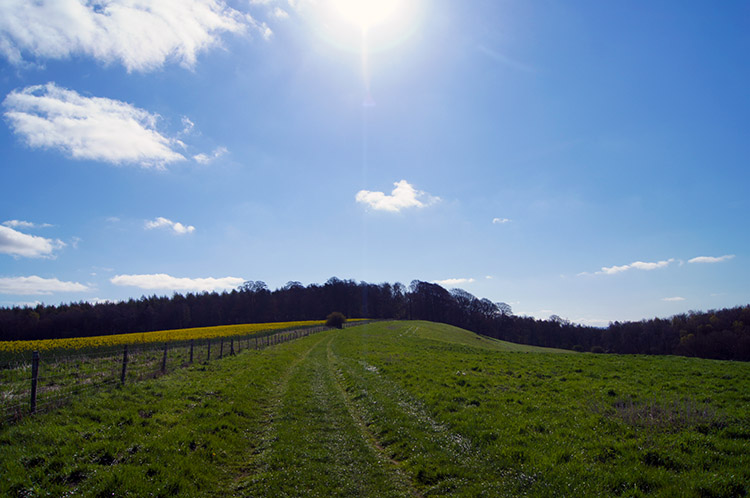 Countryside near the start of the walk 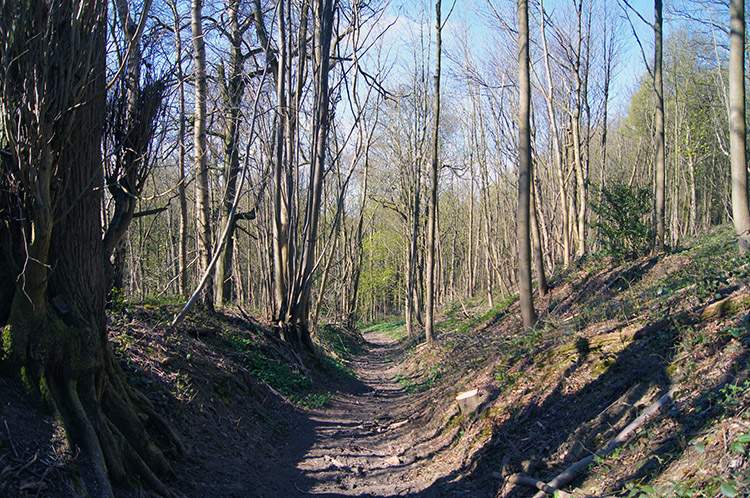 I had drawn up the route but while driving over to Castle Howard I considered where to park. I knew there was a popular parking area on the long straight road called the Stray beside the Great Lake so I headed for there. When I arrived I parked up there and looked at the map. Then I looked up the road in a northerly direction and decided to drive a little further up the road past Rye Hills Farm to where I would emerge from the walk back on the Stray at Slingsby Bank. A car was already parked there and I decided to park up beside it. This choice would allow me to enjoy the features of the Castle Estate in the first half of the walk rather than at the end.

Having made my choice of starting position I followed the Stray up the steepest part of Slingsby Bank which gave me almost fifty metres of extra height and at the heady height of 109 metres above sea level I was already at the highest point of the walk. And I had hardly started. Still that 109 metres gave me a stunning panoramic view to the south North York Moors. Fields between me and the moors shimmered in the sun which was rising fast into the sky. One the the earliest heat hazes of the year caused the brilliant yellow Oilseed Rape fields to shimmer most of all. After a half mile I left the ridge of Coneysthorpe Banks and descended southwards through woodland towards Coneysthorpe. I lost all the height gained in the wood. 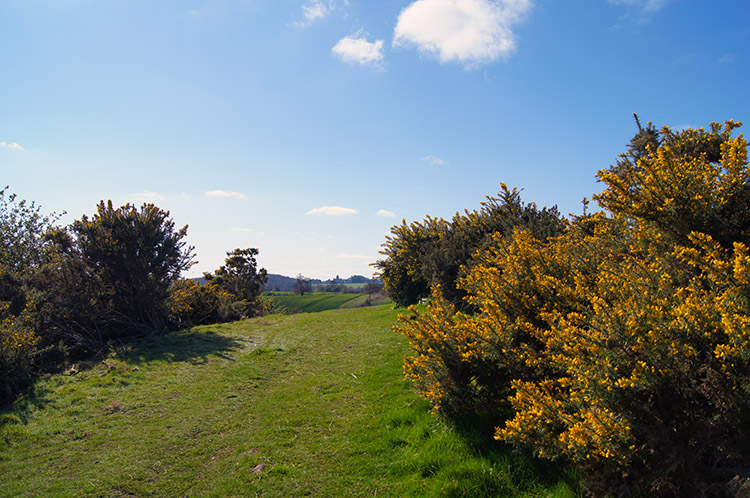 Gorse in bloom near Coneysthorpe 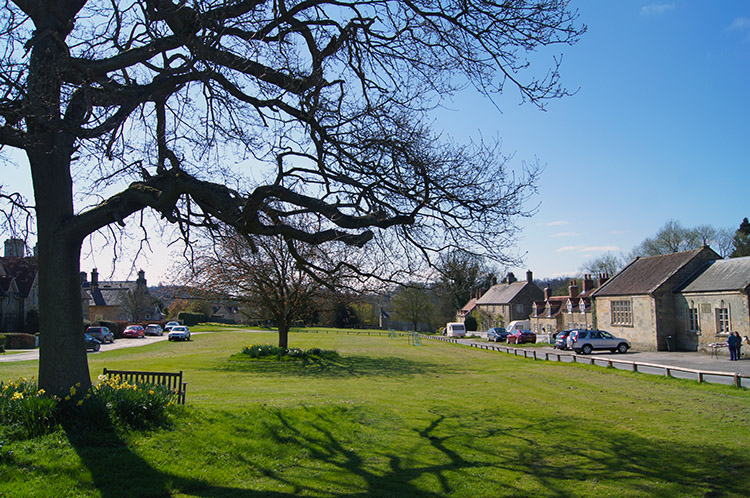 From Coneysthorpe Banks Wood I tracked on the right hand side of a large arable field and then along a lane on a course due south directly towards the village of Coneysthorpe. On Sand Hill which was little more than a bump I caught my first sight of Castle Howard during the walk. I was heading directly towards it but first I had the village of Coneysthorpe to visit. Immediately on arrival in the village I was struck by its exquisite beauty. All the detached houses and small rows of terraced cottages on either side of the village green were of individual character. All were built of local stone. All had well maintained gardens. There was not a shop, nor was there a pub. Coneysthorpe is a village in which the inhabitants are naturally proud. and it was not snobbish; I was greeted by some locals out walking or simply chatting in the street as I walked on by. It was a lovely transit through the prettiest of North Yorkshire villages. 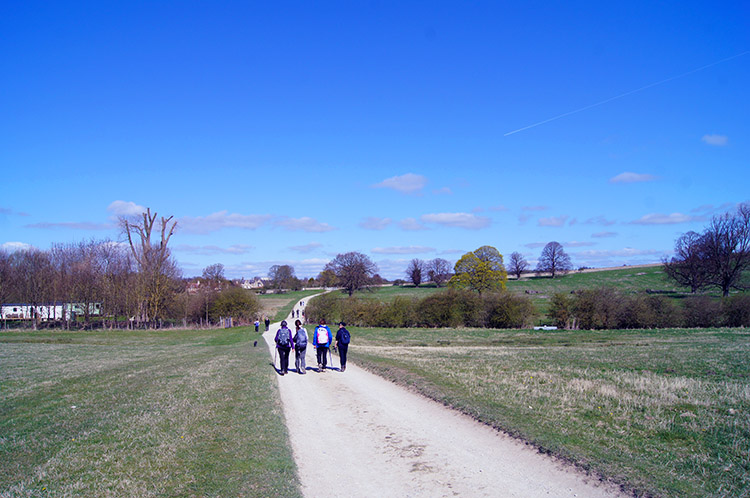 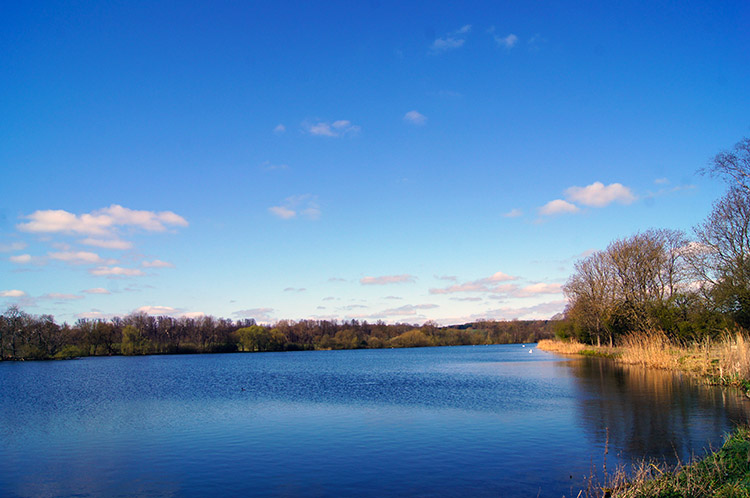 From Coneysthorpe I followed Castle Howard Road out of the village and then left the road by a gate to follow a wide track in to the estate. I passed several groups of walkers heading the other way as I continued on the track to a point beside east edge of the Great Lake. After sneaking a look beside a small shielding wood I turned with the track to head south east through Horse Close Rush, by doing so skirting around Ray Wood. s I walked through the rush a Deer bolted out from cover of bramble thicket just in front of me. The Deer was gone before I had chance to get a picture. I did peer for a while to spot it but it was well into cover once more. 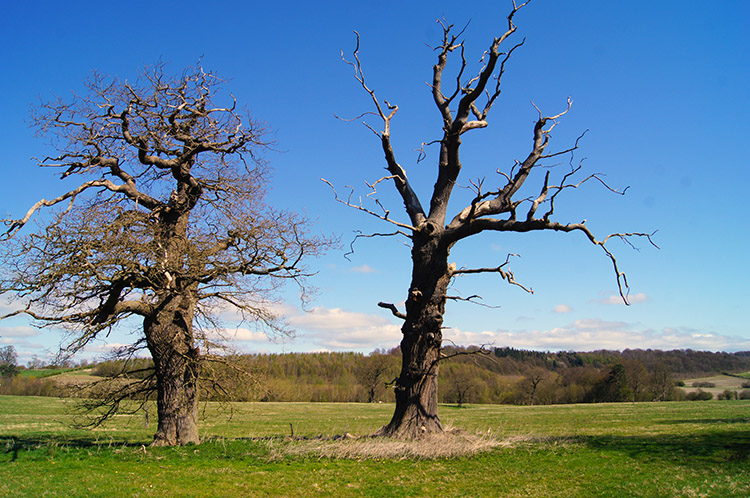 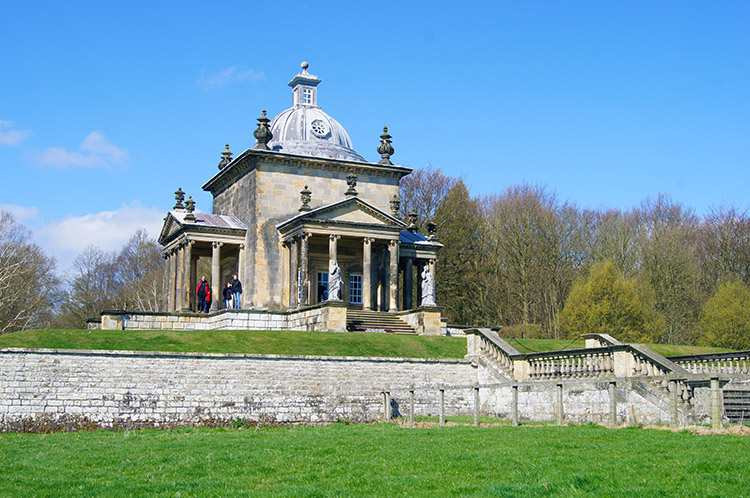 I left Horse Close Rush without my Fauna shot but my attention was soon diverted from disappointment to joy. First I centered my attention on a series of very old trees on the edge of Ray Wood. Some were clinging on to life but not yet in Spring green. Others were never going to show such colour again but their skeletal remains still struck me with awe. I wandered around them for a while before moving on to the first of a series of man-made structures in the Castle Howard Estate. The first I came to was the Temple of the Four Winds which was built in such a location to command stunning views across the hills. It does that job very well and while originally used as a place for refreshment and reading I bet the users were diverted from their books by the view. 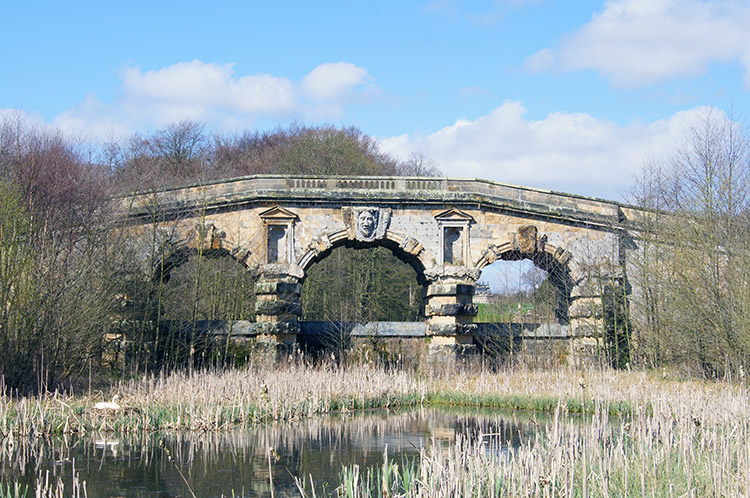 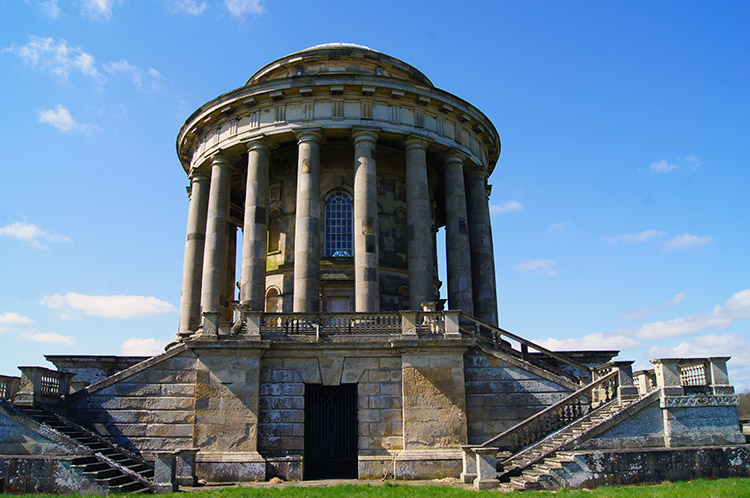 From the Temple I walked down a hill to the New River Bridge, a fine triple arched white stone bridge. Above the central arch on the east side is a carving of a face, whoever it represents is unknown. From the bridge I climbed Kirk Hill to the Mausoleum, It stands in a very impressive position right on top of the small hill, drawing in viewers from all around. The Mausoleum stands 90 feet tall and is supported by a colonnade of 20 pillars. Designed by Nicholas Hawksmoor, it is recognised as one the finest free-standing mausoleums in northern Europe. Built in the first half of the 18th century it is still the private burial place of the Howard family. 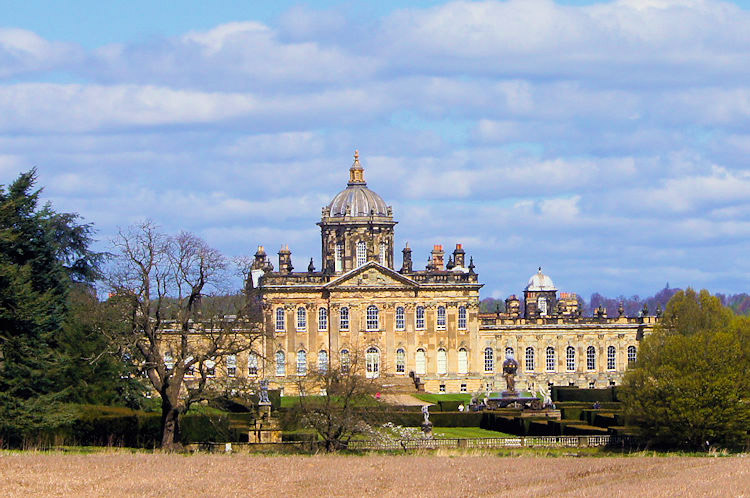 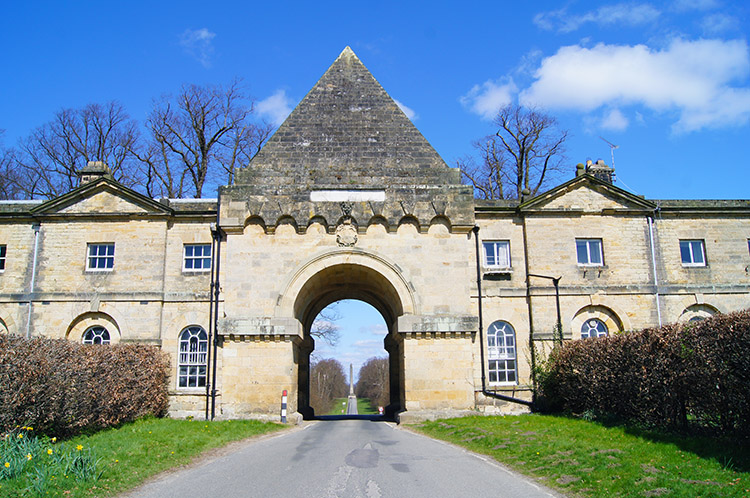 After enjoying my visits to the temple, bridge and mausoleum I returned to the bridge and crossed it to follow a track between two fields which led me towards the Pyramid. Built in 1728 by Nicholas Hawksmoor it was not looking its best this day, surrounded by scaffolding. Hollow in structure, it contains a colossal bust of Lord William Howard, the Elizabethan founder of the Carlisle branch of the Howard family. After making a right hand turn I followed a track past more fields on a course west towards the Gate House. Turning my head from the view of scaffold and Pyramid I looked right and caught my best view of Castle Howard itself. It looked splendid on this sunny day. Soon afterwards I reached the Gate House and turned right to follow the Stray northwards. 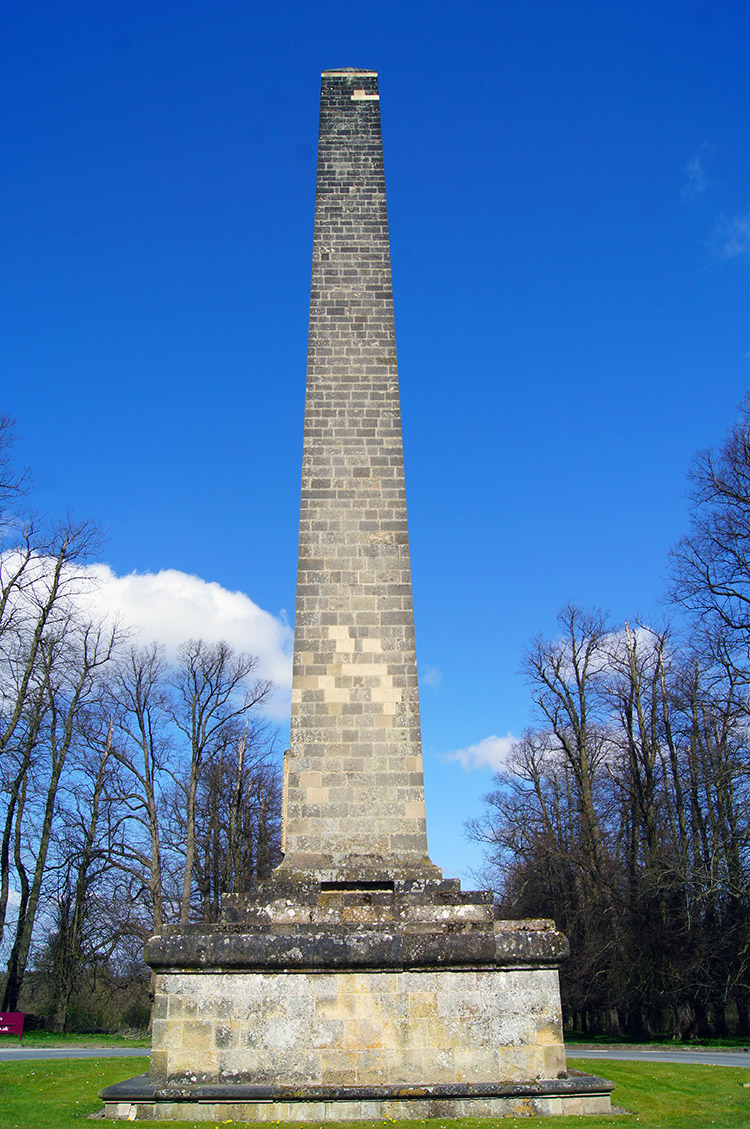 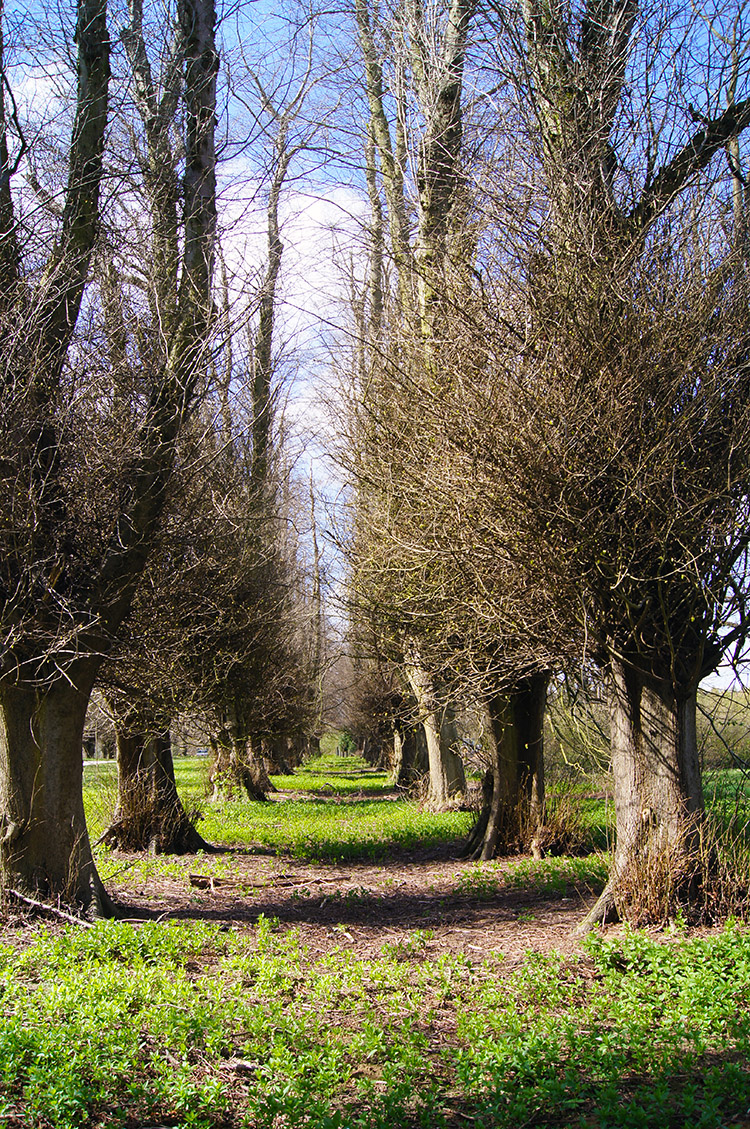 Avenue of trees beside the Stray

This section of the walk following the Stray would not have been the most exciting beside a road but it was enhanced by a good path passing through a narrow avenue of mature trees. I hardly noticed the road, only made aware of it when cars passed along it on their way to the main Castle Howard car park. To reach it cars had to go around the small roundabout in which the Obelisk stood in the middle. It stands 100 feet high. After passing the Obelisk I followed the avenue of trees a little further until it terminated just before I reached the Great Lake for the second time on the walk. 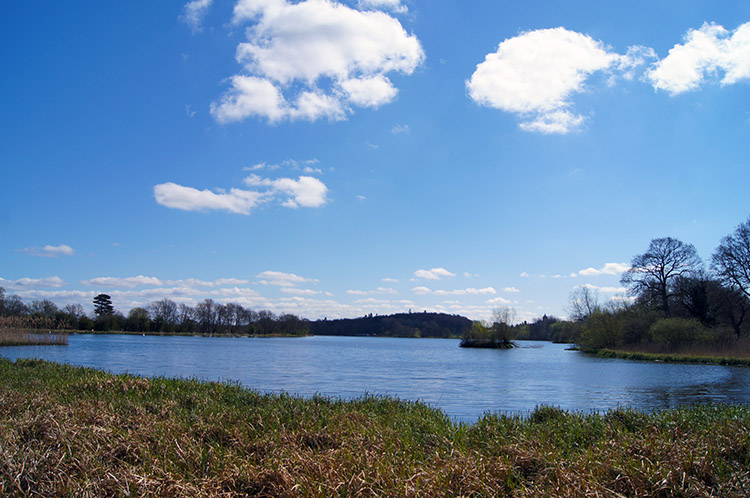 Great Lake as seen from the Stray 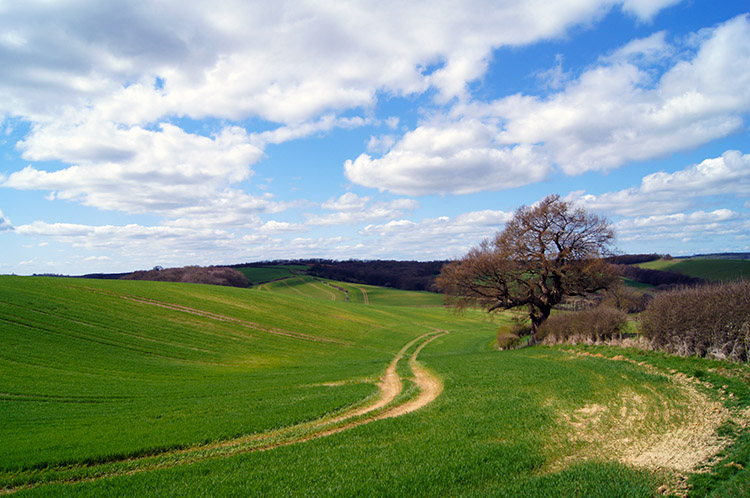 A few cars were parked in the area I had originally planned to park in myself to start the walk. They were all empty, bar one, the occupants of it sat on deck chairs relaxing or reading. Every other cars occupants were walking on the path near to the road which leads walkers on the north side of the lake close to the banks. An area of reed marsh full of wildfowl separates the walker from the open water. I continued on alongside the Stray and past a lodge house. Immediate after the house I reached a crossroads and turned left to follow the road towards Terrington for a mile until I reached a track leading through Waite Wood. At the west side of the wood the views opened out to impressive landscapes of the rolling Howardian Hills. With the fields greened up with fresh grass growth the view was captivating. With the good visibility I was enjoying I could also clearly see the White Horse of Kilburn and Sutton Bank on the edge of the North York Moors 13 miles to the north west. 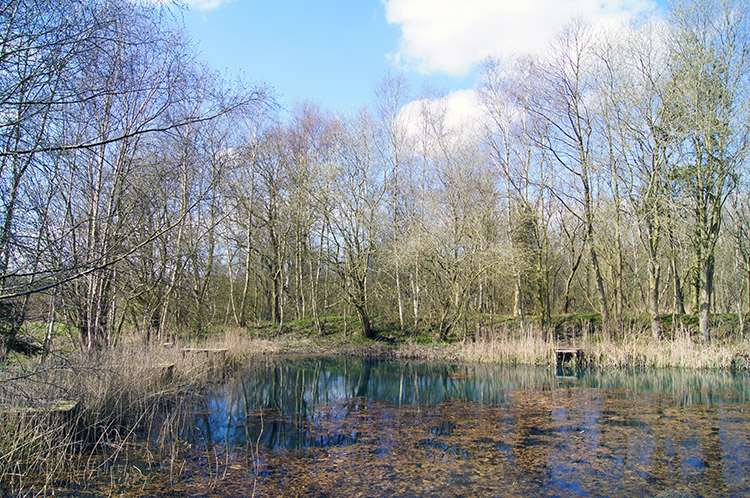 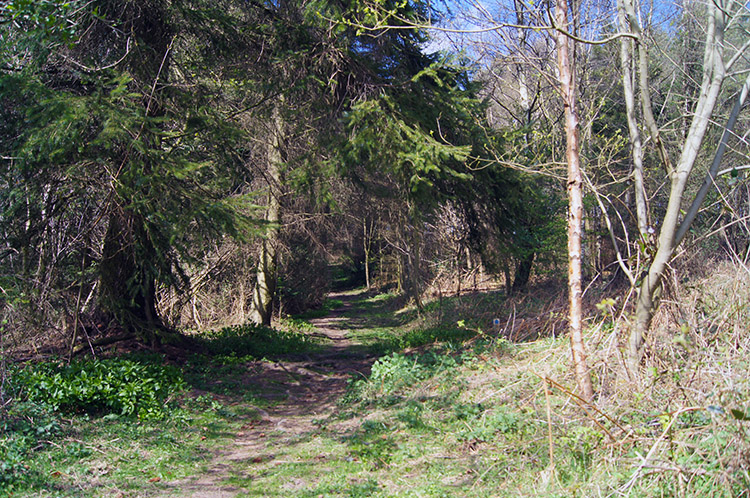 I walked a little further to a junction of paths from where I took the right hand fork to follow the Ebor Way/ Centenary Way. This course took me through the yard of Howthorpe Farm. A sign said "Never mind the dog. Beware of the owner" I had no trouble, he was not around. Despite not seeing it, I did heard the dog though. From the farm the track led me down a lane to a small fishing pond which had about half a dozen flat wooden pitches placed for anglers. None were occupied. After passing the pond I climbed Hollin Hill, a meandering course up through woodland which gained me 50 metres. It was my last climb of the day. 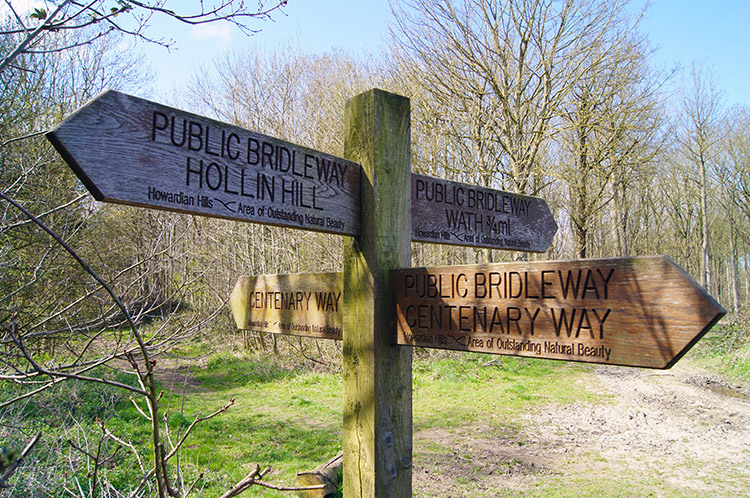 On the Centenary Way 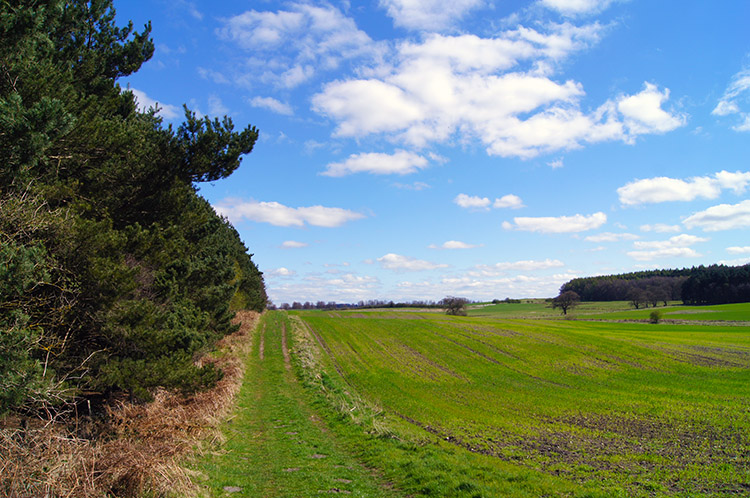 The way back beside Slingsby Banks Wood

After climbing Hollin Hill I followed the Centenary Way eastwards on the topside edge of a long woodland with a series of local titles. Hollin hill Plantation was followed by Fryton West Wood and then by Fryton East Wood. Why not just Fryton Wood I thought, there is no subtle change in character. Perhaps to differentiate in ownership or tenant management? After passing the east wood I descended the bank I had climbed at Hollin Hill between Fryton East Wood and Slingsby Banks Wood. This led me down to a good field side track which took me along a series of fields back to the car. As I walked this final section I looked up to a noise in the sky high above. A small aircraft was performing aerobatics, twisting, turning, rolling, looping, the lot. It performed for me all the way to the finish and still performed as I changed to drive home and while I took refreshments. Maybe the pilot was revelling in the beauty of the surroundings too. I was buzzing.