A personal record of my walk of the Sandstone Trail long distance footpath with a written journal and with photographs. Tracklogs for GPS units and for use with Google Earth are available for download for each stage. 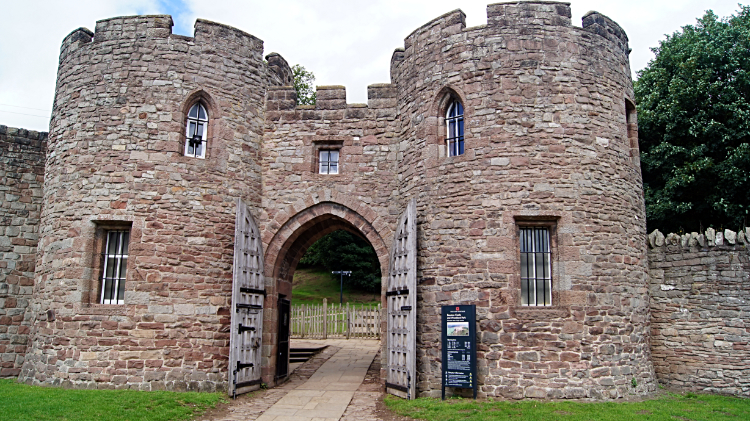 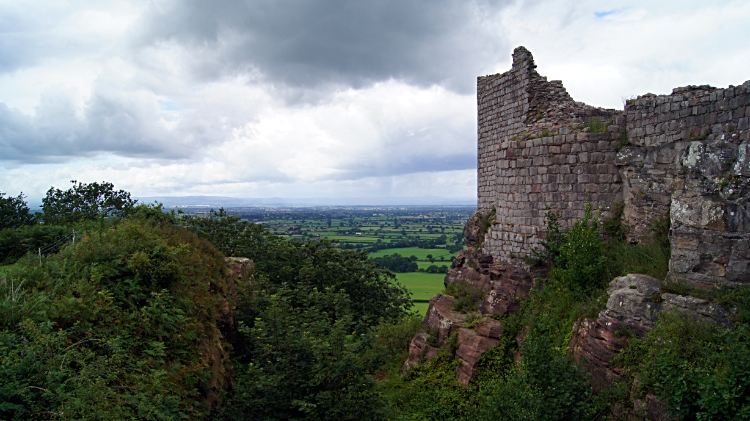 View to the south-west from Beeston Castle

Being a member of English Heritage I simply had to explore the site of Beeston Castle. Through the gatehouse I went and into the reception office where I was delighted to be allowed to leave my backpack behind the counter. Free of excess weight I enjoyed racing up east side access path leading to the oldest part of the twelfth century castle at the very top of Beeston Hill. It was a 250 feet climb. The extra altitude, a little over 100 meters higher than the flat table of the Cheshire Plain provided almost unbroken views over the entire range of countryside circling the castle. The exception was directly southwards where the nearby Peckforton Hills blocked any view beyond to South Cheshire and neighbouring Shropshire. And the Peckforton Hills were where I was heading next. 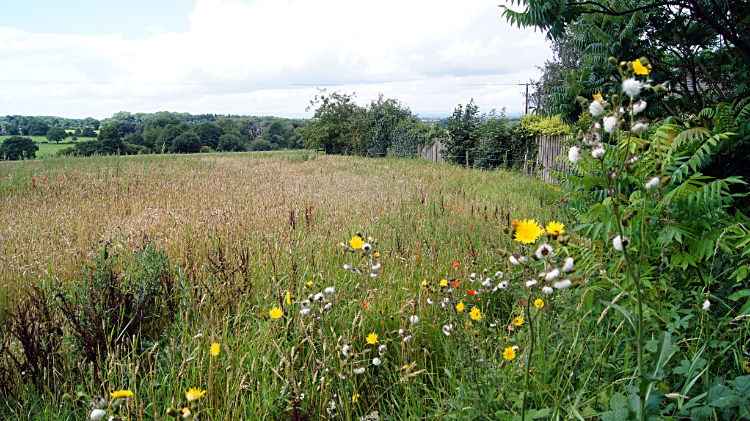 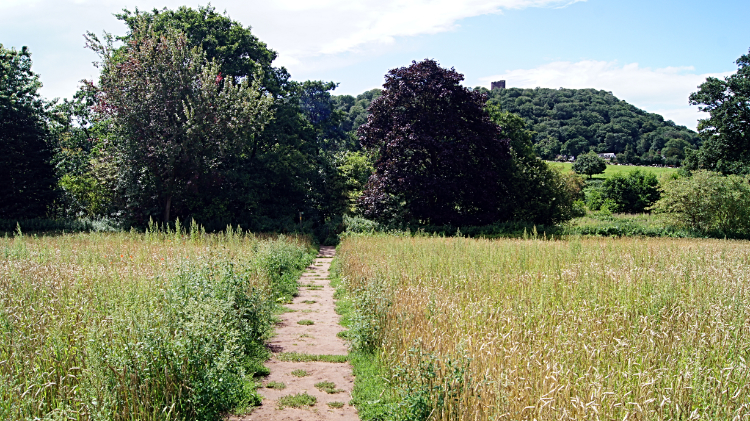 Heading to the Peckforton Hills

After the fun time I had at Beeston Castle and with the extra weight of my backpack strapped to me once more I left the site of Ranulf de Blondeville's former status symbol and headed across the short low plain separating Beeston Hill and the Peckforton Hills. As I crossed I could see the grandeur of Peckforton Castle facing out from the trees shrouding the north side of the hill. "Should I visit or not?" I thought to myself. I decided not to, having spent enough time wandering Beeston Castle and wanting to get on. Peckforton Castle, in reality a country house originally and now a private hotel, is impressive though and probably well worth a visit. Another time maybe. 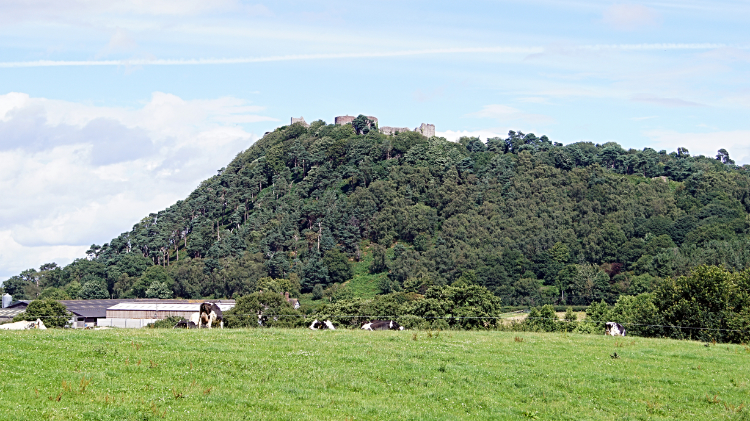 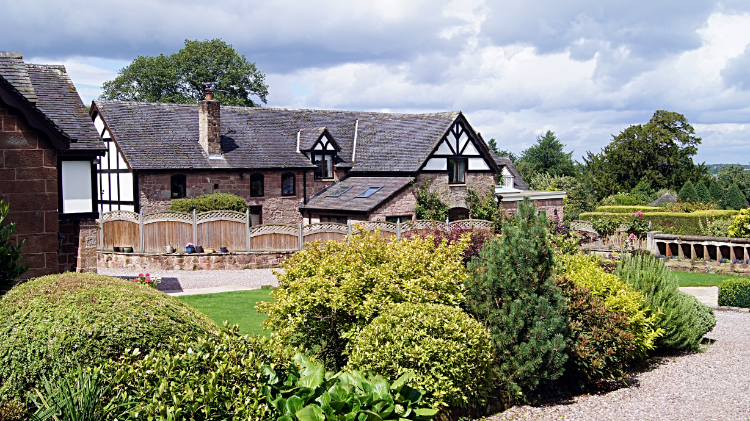 Pretty house beside the Peckforton Hills

I climbed to the Peckforton Hills by skirting around from the north side to the west side. In fact, I never climbed to the true summit, staying on the western edge and sometimes dropping from the hills altogether. The lowland area surrounding the Peckforton Hills was adorned with nice houses. This is clearly a posh area. I came upon the countryside close to the village of Burwardsley. It was another very beautiful part of the country and a delight to be exploring for the first time. I decided my first walking trip in Cheshire was long overdue and that the Sandstone Trail was already exceeding expectations. It is without doubt a very beautiful walk. 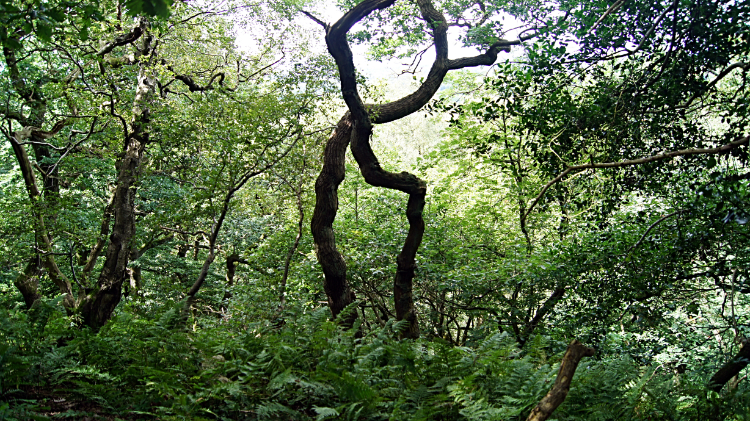 Gnarled trees of the Peckforton Hills 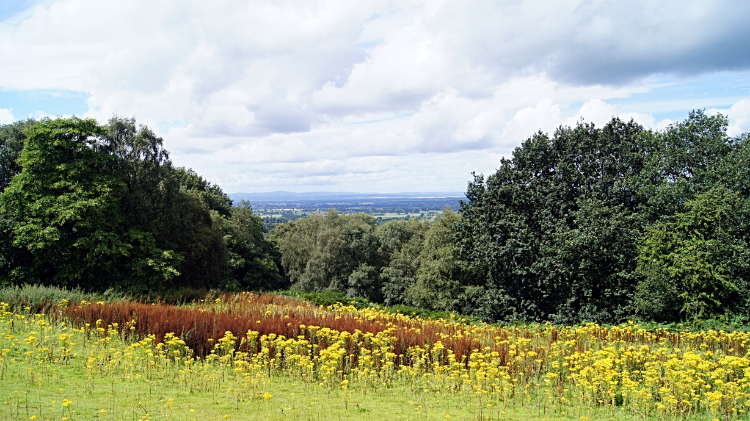 From the surroundings of Burwardsley I climbed back on to the fringe of the northside Peckforton Hills and headed on the west edge towards the center. I came across a small wood which was full of the most enchanting gnarled trees. It was like being in a fairytale forest. One pair of trees twisted around each other and at one angle of view they formed the number eight. Others bowed down in two rows and facing each other in a line making for a natural arch such as a group of attendees might make in tribute to a wedding couple marching out of church. It was surreal, enchanting and gobsmacking all in one. Then soon after I walked back down from the edge of Peckforton Hills to a countryside of exquisite colours. One field was a pot pourri mix of greens, yellows, browns, pinks and reds. Summer grasses, shrubs and flowers were all abundantly thriving. 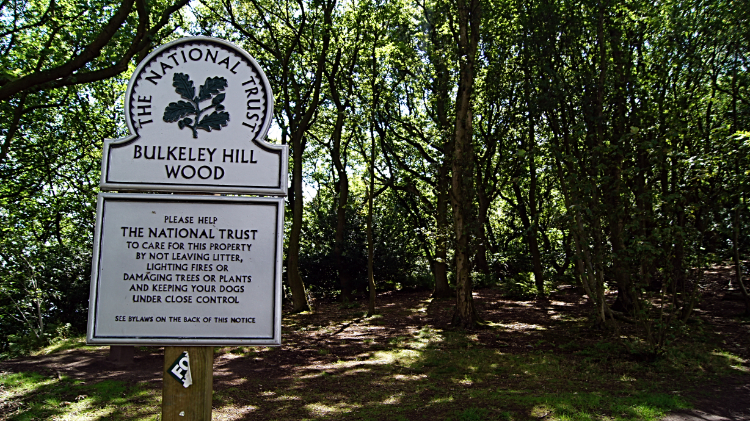 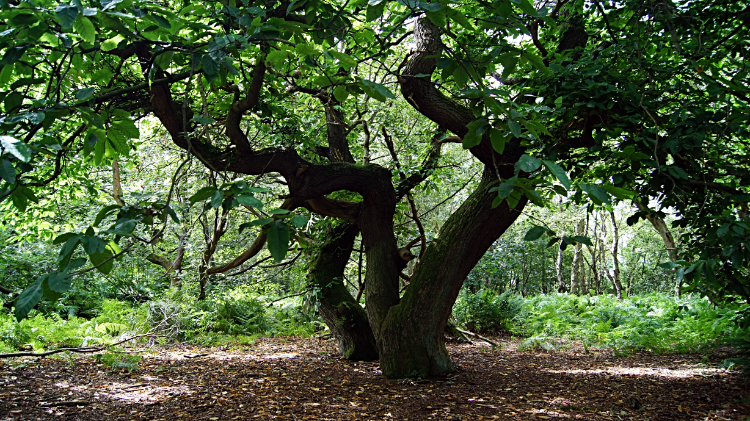 Thrills were coming thick and fast, one after another. The weather helped of course. it was a lovely summer's day and by now I was in the middle of it. Next up to enchant me was Bulkeley Hill Wood which is managed by the National Trust and its wooded slopes include 12 acres of semi-natural ancient woodland. The hill is of biological importance and has been designated a county site of for its woodland and grassland habitats. As with many of the gorgeous woodlands I had already enjoyed walking through on my Sandstone Trail journey many of the trees tested my imagination. They so say you can talk to the trees don't they? I could well have asked them how they got their remarkable shapes. In the confines of woodland they never grow straight up. That is for sure. They twist, turn and confound the imagination. Bulkeley Hill Wood was another stunning example of ancient woodland on the Sandstone Trail. I left, but I was not done with awe inspiring woodlands yet. 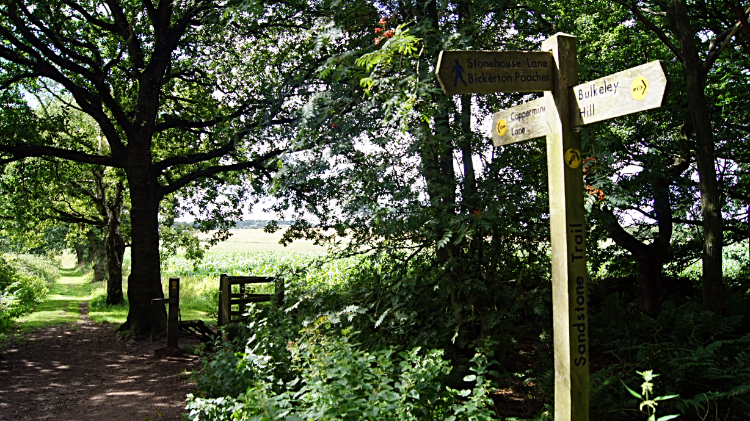 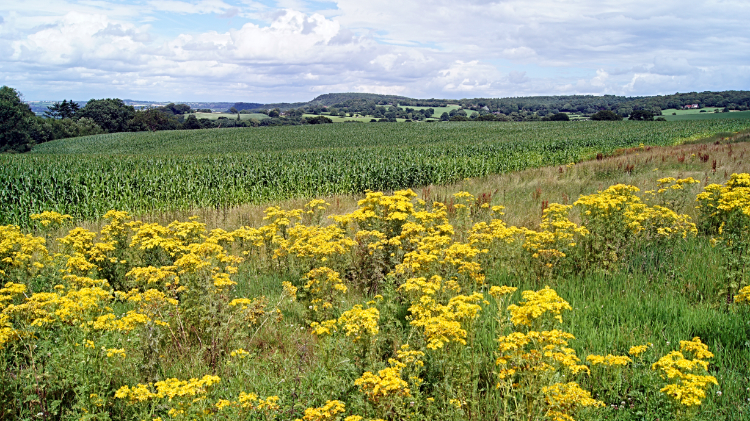 Next up came another mile of delightful countryside, predominantly farmland, between Bulkeley Hill and Bickerton Hill. The leisurely mile was on a series of fieldsides, country lanes, some metalled, some unmade and some grassed. As before, when out of the trees more colours abounded. This time the dominant colour, after the green of grasses and grain crops, was yellow which was provided by swathes of flowering plants on the edges of the fields. Around here I took time out to sit down for a break and take a look at my Ordnance Survey Explorer Map. I loved scanning over maps before a walk and as much so during a walk. And lo, here I was surprised somewhat. On what I imagined to be this low level stretch between Bulkeley Hill and Bickerton Hill was in fact constantly between 170 meters and 200 meters elevation. I reached Droppingstone Farm in the supposed low land gap. Here I faced a climb to the highest point on the entire Sandstone Trail. I was not perturbed though. 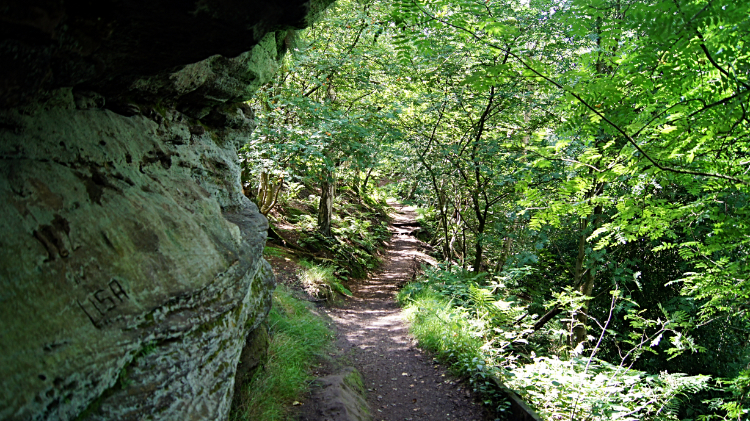 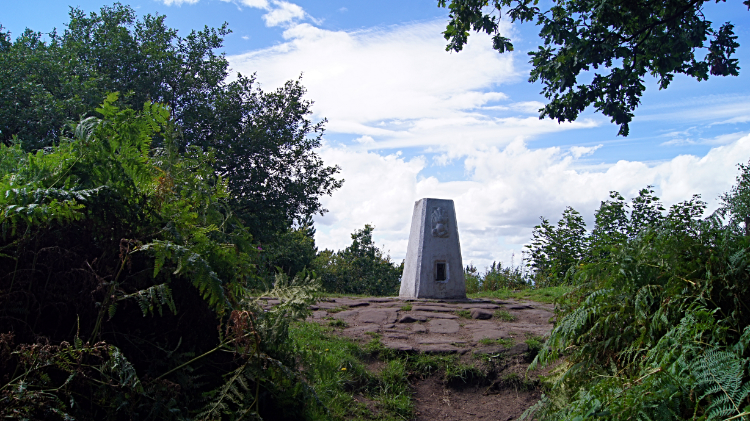 I climbed from Droppingstone Farm to Bickerton Hill knowing I had a tough 53 meters of ascent to reach Raw Head. For the purpose of accuracy and for clarity I was on my first of the two Bickerton Hills. There is a north one and a south one. The north one is narrower and the one with the high point of Raw Head where a trig pillar sits atop. The altitude of the landmark is 227 meters, not exactly a mountain. Nor does it provide a great view for the trig pillar and sandstone cap it stands on is in the midst of a dense thicket. The only decent view I could get from the trig point was one east back to the Peckforton Hills where I had come from. The rooftops and buildings of the village of Bulkeley were also clearly in view. From Raw Head I continued on the top ridge line of the narrower Bickerton Hill before descending to Gallantry Bank. Back into the open and on a countryside crossing to the broader Bickerton Hill was next. And it was at the start of this section of my walk that I reached a stop me in my tracks moment. 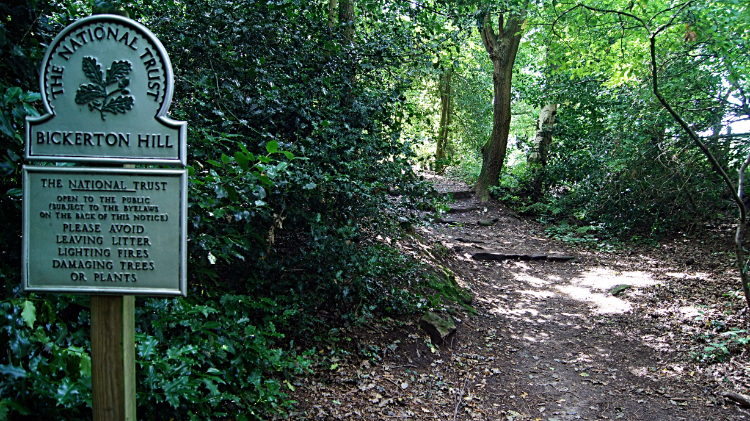 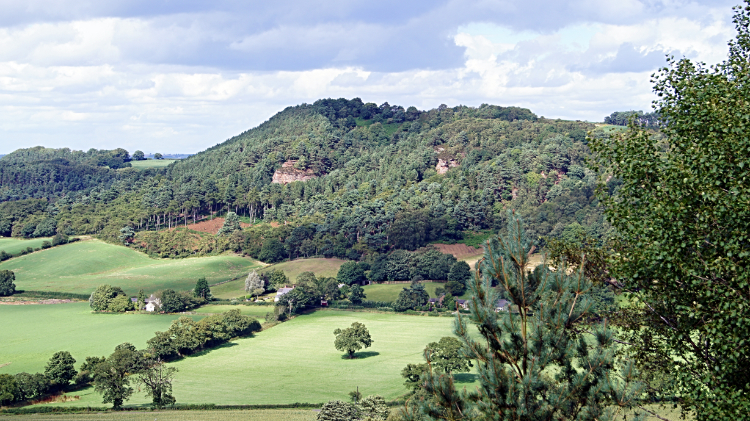 I will let the Facebook post I made that very evening tell the story: "Did not get the picture because of what happened. I was walking across a field after leaving Bickerton Hill when I saw something in front of me on the path. I looked at it and it looked at me. We were about 15 meters apart. At first I thought it was a cat but then I realised it was a Buzzard. Suddenly it took to the air with a dead rabbit in its talons. Not a young rabbit but a fully grown one. It flew about 10 meters into the air but was struggling to gain more height. Then it dropped its prize and flew to perch in a tree on the edge of Bickerton Hill where it could watch whatever happened next. I stood for about five minutes imagining it might come back but it stayed in the tree. Giving up on my patience I walked past the dropped rabbit and kept going, looking back at the Buzzard which was now circling the field. I guess it went back for its prize when I was gone." The whole episode lasted for about fifteen minutes and I felt so privileged to have witnessed it. In fact I was part of it. The Buzzard would not have retired from its prize had it not seen me. Anyway, leaving the bird with its lunch I continued onwards, south-west and then due west to the climb of the second and final Bickerton Hill. 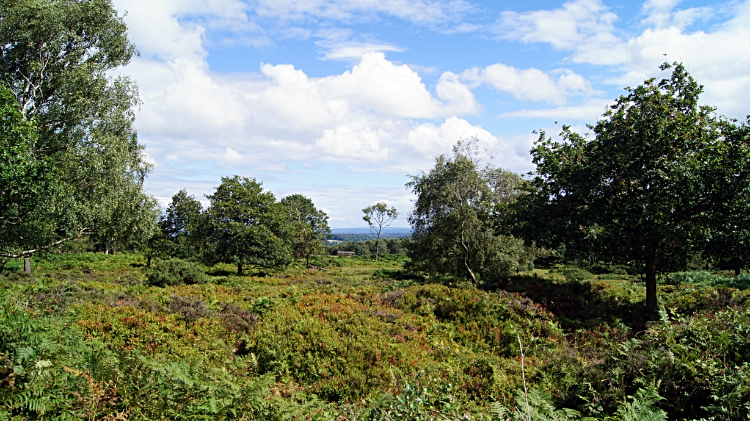 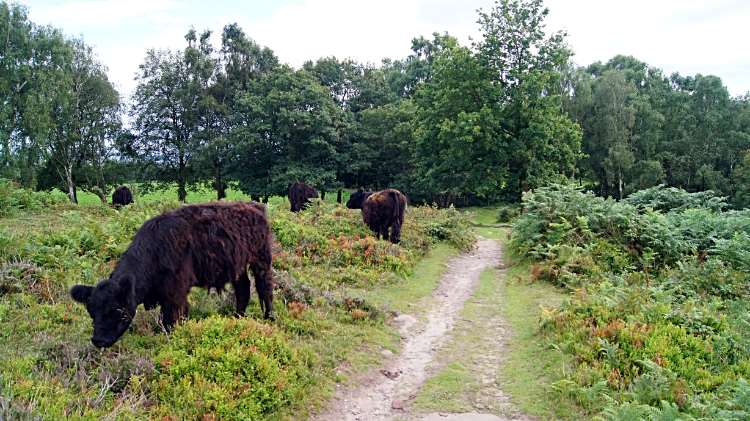 This Bickerton Hill, as with Bulkeley Hill Wood earlier, is managed by the National Trust. I climbed to Mad Allen's Hole, a cave believed by some to be the location of "Allenscomb's Cave" in which John Harris, the wild and hairy English Hermit, lived for 46 years in the 18th century. From the cave I continued to Maiden Castle, an Iron age hill fort, once inhabited by people and now covered in ferns, gorse and other upland scrub. The only inhabitants now are Cattle employed to keep the scrub manageable. The cows were friendly Welsh Blacks on my occasion here. In an open area beyond Maiden Castle a father was attentively encouraging his young daughter to fly a kite. Which was nice to see. More family groups were enjoying a walk up on Bickerton Hill too. I stayed a while myself before taking my leave of the scene and descending the south edge of Bickerton Hill, while doing so also taking my leave of the Mid Cheshire Ridge for the final time. It had been an exciting crossing. 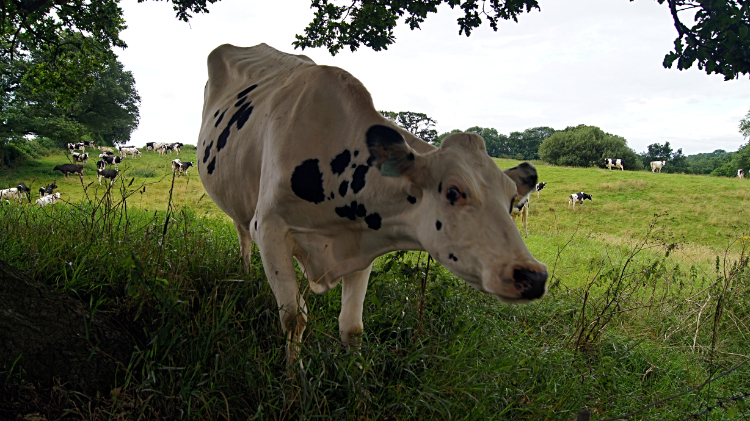 Inquisitive lady on the trail 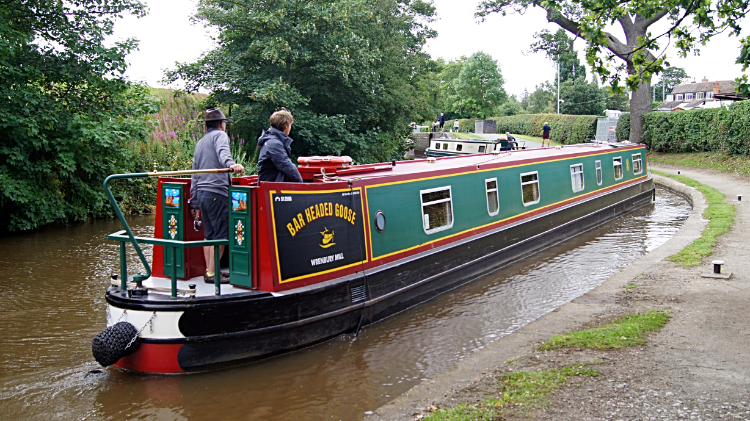 The final nine miles of the Sandstone Trail is across farmland across fields, on roadsides, along farm tracks and even through several farm yards. All was pleasant enough. Hampton Green, Bickley Hall Farm, Bickley Field, Chads Farm, Pearl Farm, Moorhead Farm, Moorhead Cottage were all ticked off. "Phew I have reached the canal" I gasped at Willeymoor Lock. Now a finale of four miles walking on the Llangollen Canal towpath to Whitchurch was a lovely way to end my walk of the Sandstone Trail. At a little over half way at Grindley Brook I stopped for refreshments at a cafe and got into conversation with a lad who had given up the rat race and lived his life permanently in a small launch. We had a good laugh, both agreeing we adored the great outdoors. While we talked at a canal side cafe table a Sparrow came and enjoyed our cake. We loved that. Bidding the lad bye I continued on to the end point of my Sandstone Trail at Whitchurch Spur. I did not walk into town, continuing on canal side to begin my Shropshire Way. My conclusion on the Sandstone Trail. It was superb, truly. Though to be honest I would end it at the south end of Bickerton Hill. A final thought... "the section from Frodsham to Bickerton is amazing."