Summary: I have to admit this walk was a mistake but the error led to an interesting walk. I had intended to complete the Nantlle Ridge, not just part of it. From Rhyd Ddu we climbed Y Garn but lost our way in the cloud hanging on on the mountain top. By the time we cleared the cloud it was too late and the vote we took led to this impromptu walk which was fun. 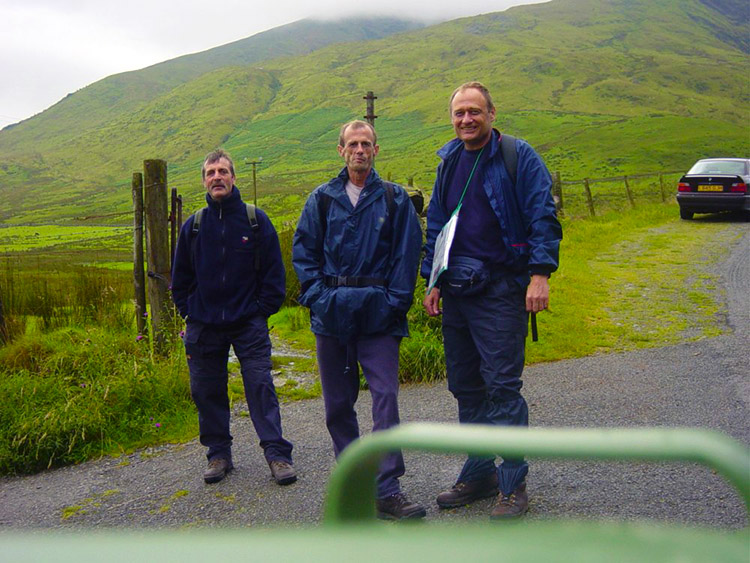 A rather damp start but we're up for it 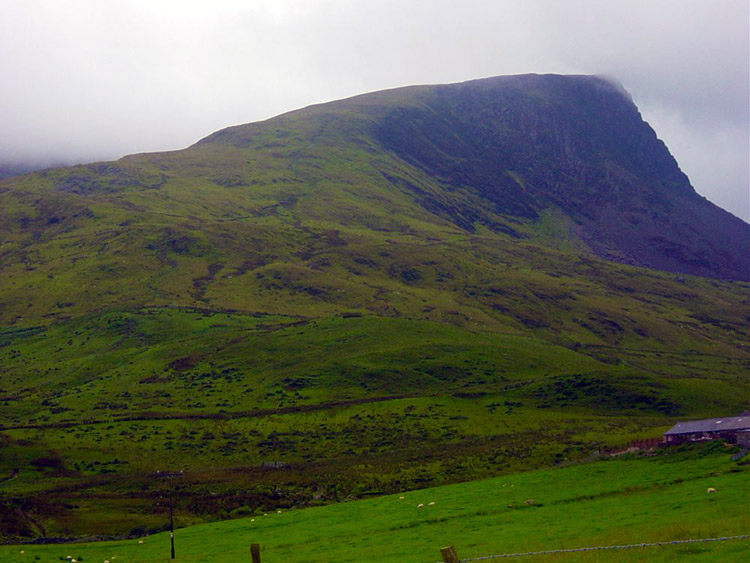 Y Garn as seen from the east near Rhyd-Ddu

Having never walked in the Snowdonia area before I had spent the last few weeks reading up on the area. One walk had particularly caught my interest, a walk that started from the village of Rhyd-Ddu. You will find the village on the junction of the A4085 and B4418. I had seen the planned walk in Trail magazine, a walk of the Nantlle Ridge setting out from Rhyd-Ddu and finishing in Cors Y Llyn. For this reason we took both cars. I took mine to the finish and Steve drove me back to the start. See you later car! The weather was overcast but breaking as we arrived at our starting point, Drwsycoed Uchaf. The walk began with the steep ascent of Y Garn. There are a few hills named Y Garn in Snowdonia, so don't confuse this with the better known one directly west of Tryfan. The hill towers above you from the starting point and its best just to put your head down and puff, puff, puff up the well walked path to the top. Steve and Dave left me behind as usual. They are always better starters than me and certainly blessed with lighter frames for climbing. I do drink more on an evening too! I always make it to the top though and recovery is quick. As I struggled up and was reaching the top Steve passed me on his way back down. "I am not doing that" he said referring to the exposed edges on the top of Y Garn. He had decided to stay just below cloud where he could determine his steps ahead, keeping height on the eastern side of the hill. I saw the exposed edges through the gaps that appeared in the cloud and followed the clear path to a meeting with Dave as he sat beside a stile sheltered by a wall on the flat rocky top of Y Garn. It was windy on top so the brief shelter was appreciated. 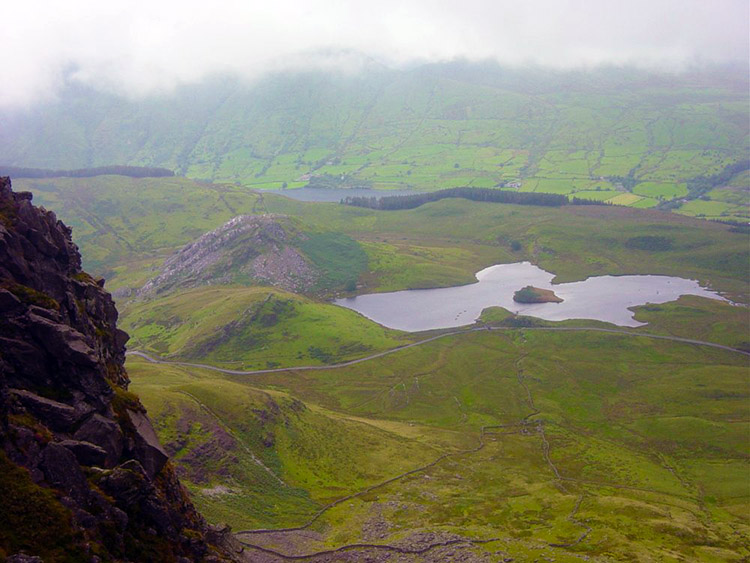 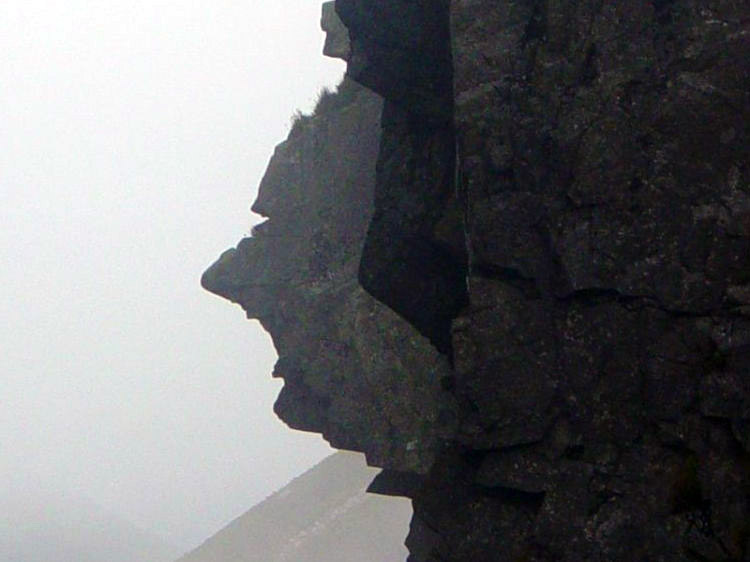 The incredible face of Y Garn

I now know we should have crossed the stile and kept to a westerly direction to do the Nantlle Ridge. But we did not realise at the time and as Steve had cut to the eastern side we followed a clear ridge in a southerly direction. Minutes later we heard Steve below us. I was heading through cloud onto a rocky ridge with Dave still in company when I looked back and saw the most fantastic silhouette in the rock face on Y Garn's western flank. The clear face was awesome and the best I have ever seen. I shall always treasure it and that is why it adorns this page and the Snowdonia introduction on the homepage. I took the picture in breaking cloud that enhances this awesome moment in my walking life. By now the ridge was getting rocky and narrow. I was on Mynydd Drws-y-coed. It was tough and in cloud impossible to negotiate the top. Dave had dropped to Steve's level a few minutes ago. I now followed and we met up out of cloud below the ridge. I had done the Nantlle ridge but only part of it and not as I intended. As far as I was concerned I had done a better one. It was exciting and that face made it all worthwhile. We stopped on a grassy rolling hill, not unlike the Howgills near Cwrn Dwyfor. This time we took our time to read the map and agree where we were. Once orientated we decided trying to get to my car at Cors Y Llyn was not an option any more. So we looked at various possible routes to walk a circular route. We agreed to make our way to a disused quarry and then walk through Beddgelert Forest back to Rhyd-Ddu. 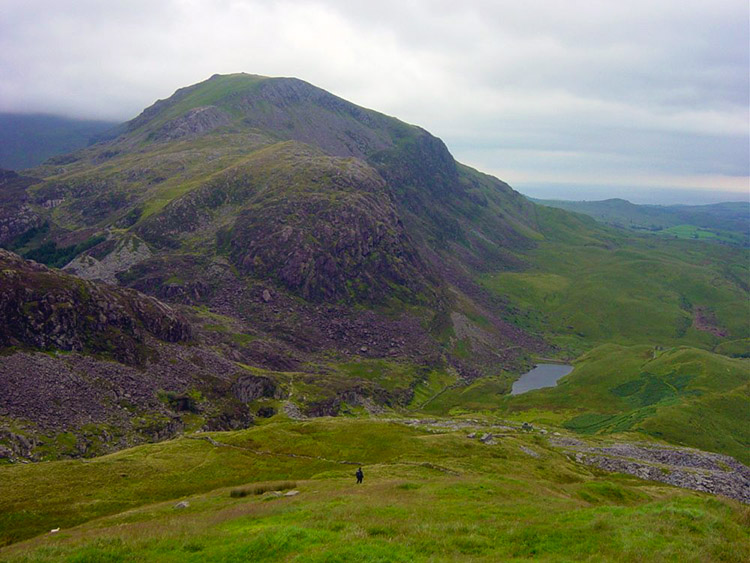 Descending to the disused quarry at Cwm Trwsgl 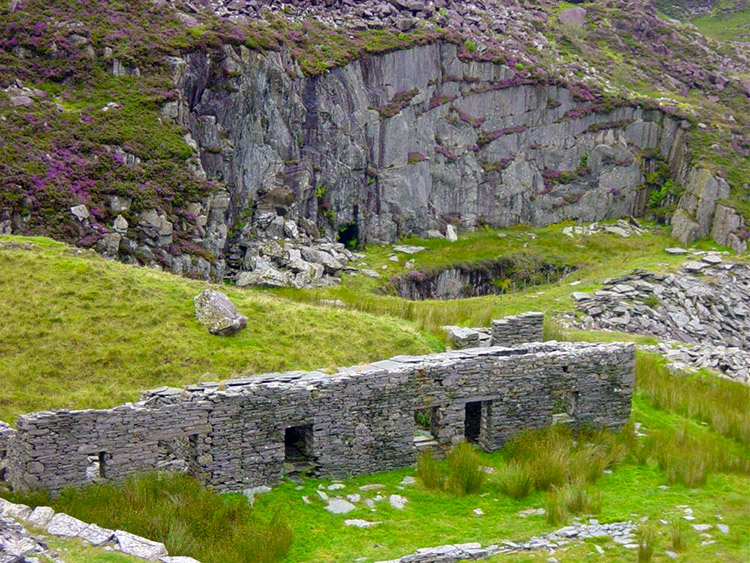 The abandoned settlement at the disused quarry

The quarry was spectacular and eerie as all the dwellings still stood in terraced rows, a testimony to the past. You could almost touch the austerity of it all and I paid tribute by having a break and a Kit Kat. The boys ate their own fayre. We also explored around the quarry and searched a small cave. There was also a deep pit to inspect. It was sensibly covered over with iron mesh to stop anyone falling in. It was good fun making our exploration of the workings and in such spectacular scenery too. I hope the quarry people appreciated it. 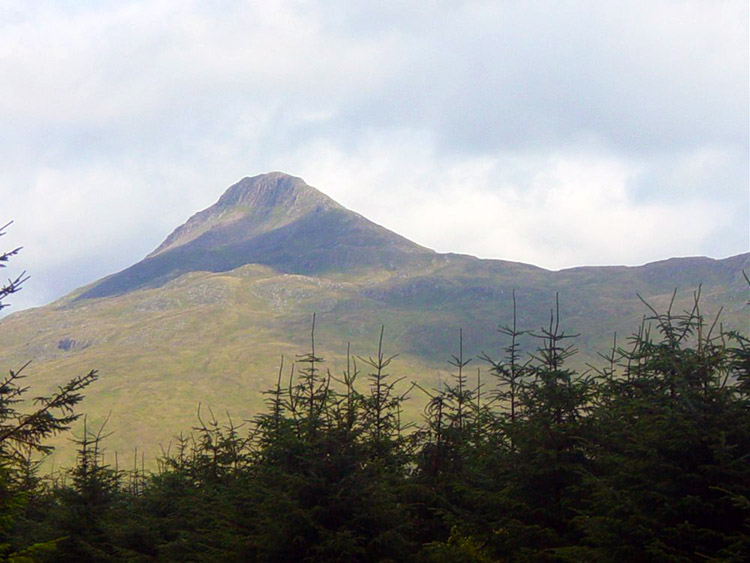 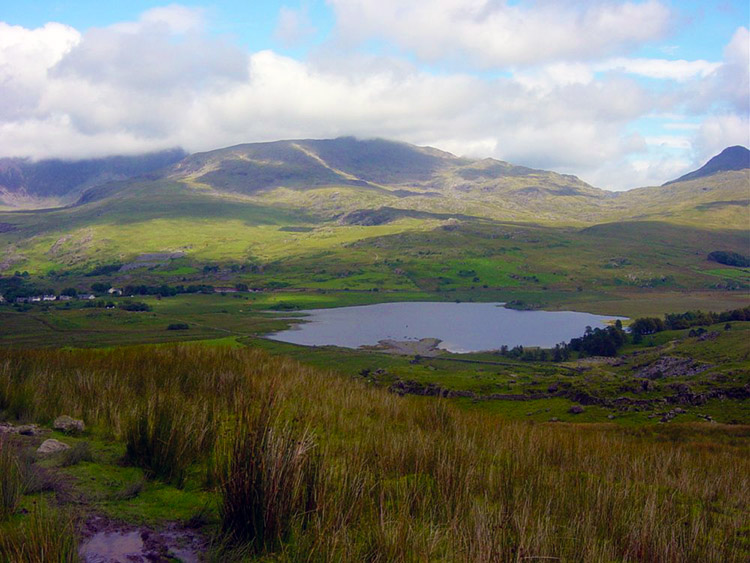 After a good rummage around the site we then left the settlement and wandered through the dark and monotonous conifer plantation that is Beddgelert Forest before emerging into the light of day. As we walked back to the car we startled a heron (I had never seen so many) as we passed a small stream and enjoyed spectacular views of the Snowdon area, a fitting end to a super walk with a most spectacular sight. I wonder if I will ever complete the Nantlle Ridge?