Summary: After the long day of road walking in some atrocious weather it was a relief to see the longest day of my Wales Coast to Coast walk followed by the second to shortest. And certainly the easiest day of the eighteen stages. No real climbs to make, just a few rolling hills to cross over, on the seven mile walk from Rhandirmwyn to Llandovery which mark my transit from the mid-Wales section of journey into the south of Wales. In brief this easy seven mile walk brings me to chapter three of three. Chapter one was Snowdonia and the big mountains. Chapter two was the mid Wales hinterlands of Powys and Ceredigion with this bit of Carmarthenshire too. Chapter three, still pending, is four days crossing the Brecon Beacons National Park and then two final days southbound to Cardiff. 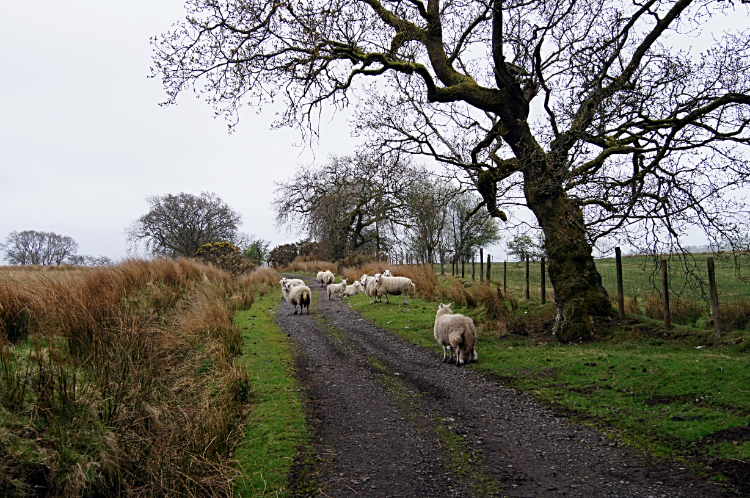 Being shown the way by Sheep 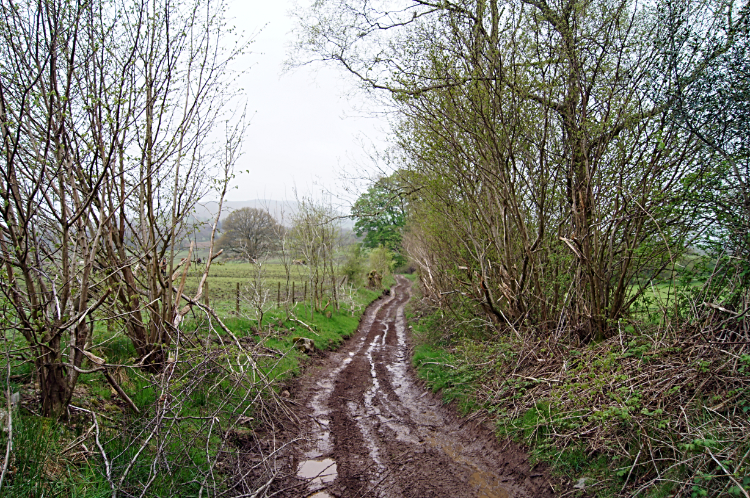 The slipping and sliding lane

Mud glorious mud. If I could sum up this short and easiest stage of the walk then I could think of no better title. It was raining at the start of my walk when leaving the Royal Oak in Rhandirmwyn and it was raining when I arrived at my accommodation in Llandovery. It never stopped in between. Two plus factors though. First my feet had healed somewhat. This happens with me on long distance walks when carrying heavier backpacks; I go through a spell of foot injury in the second to third week and heal as I go along. Sometimes, like on my walk through Scotland in 2011 I have to stop for a day or two. Luckily I did not have to here. Second plus factor; today was more unmade tracks and across fields rather than tarmac roads. There was a downside to that though. I did slip and slide like a person in ice skates who had never been on ice before. Some of the farm lanes were a particular hazard and I must have appeared very ungracious to the Sheep, Horses and Cows observing. Fortunately for me no people saw me on the slide. They were not daft, all indoors and out of the rain. 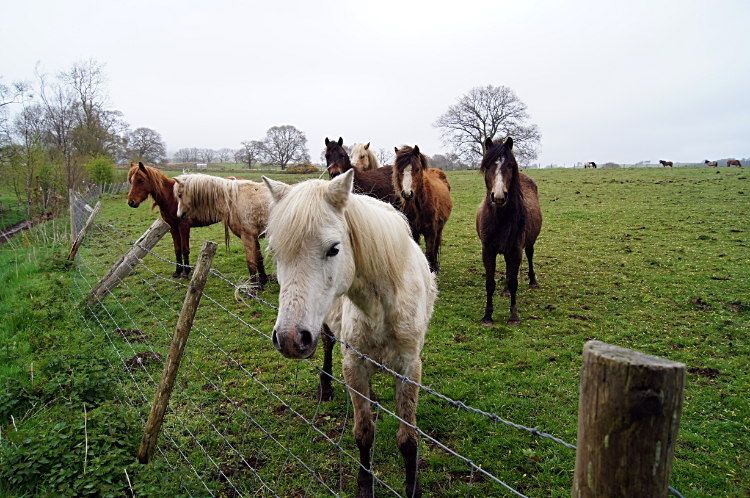 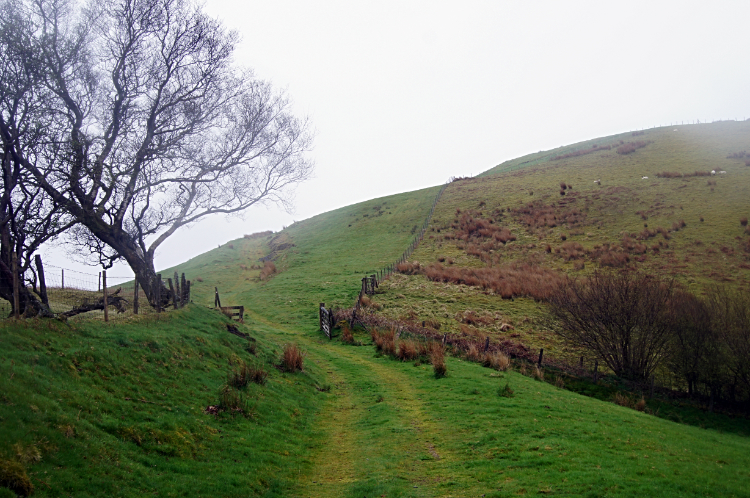 The walk, apart from the slipping about was uneventful really, the last transit stage of my walk. The reason for the routing to Llandovery was in order to pick the Beacons Way up tomorrow. I looked forward to that and also to meeting up with my best pal Steve who was to join me for three days of the walk across the best of the Brecon Beacons. For now though, just five miles or so to Llandovery by a countryside way. I met lots of sheep on the way and some friendly horses which came to say hello. I made my only significant climb of a hill called Cellynog, a climb of 120 meters before levelling out to cross upland country, undulating for four miles on and around 200 to 250 meters elevation. Views were okay but not great. Cloud was low, it was misty up top and with little to no wind I knew the weather was set in. As walked onwards I thought how week one of the walk through Snowdonia was sunshine in the most part and without any rain at all while week two, since leaving Machynlleth, had been all cloudy and with rain which kept on coming. The worse days of unrelenting rain were the one from Ponterwyd to Devil's Bridge and today. Yesterday had the worse type of weather of it all. Hurtful hailstones. But then at least it stopped now and again. 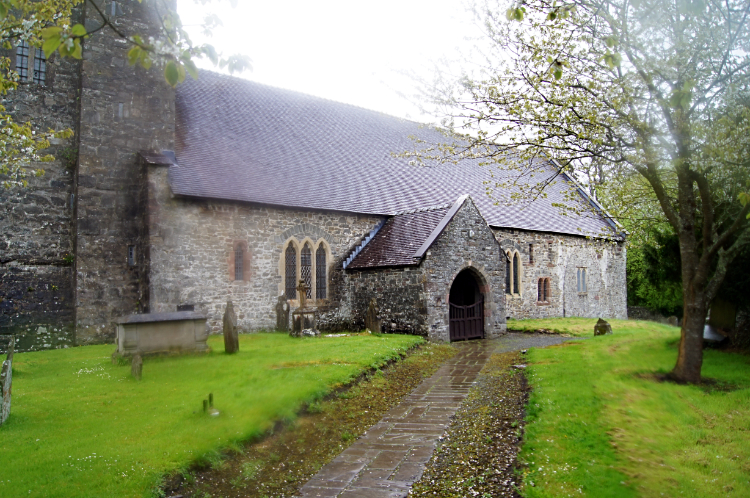 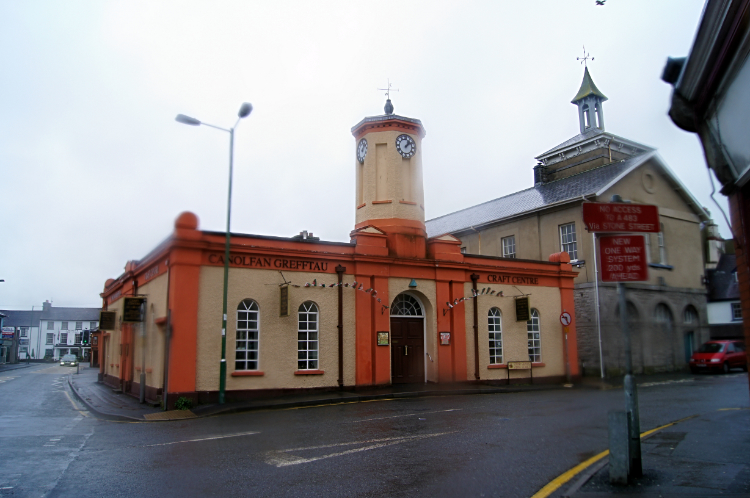 I arrived in Llandovery just before noon. despite the rain, the slipping and the sliding, and the general easy pace of my walk from Rhandirmwyn I had only taken two and a half hours to cover six miles, the last two and a half on a tarmac road leading down to the town. I had strolled it, kicking loose stones down the road, picking up sticks and thrashing nettles, picking up grasses and reciting the rhyme "summer tree, winter tree, bunch of flowers, April showers". You know the one. I had watched birds darting in and out of roadside hedgerows, on the day long activity of providing for their young. Then once into the north side outskirts of the town I looked to the buildings and the architecture. Llanfair-ar-y-bryn Church was one of the first edifices to capture my attention. As I looked at the fine building I did not know it was partially contained within the earthen ramparts of a Roman fort. On I went, into the streets of Llandovery. Many of the terraces on New Road were prettily painted in bright colour. Cheering me up on this gloomy day. I reached the town center. Llandovery Craft Centre was another pretty building. Just fifteen minutes past twelve when I stood looking at it I thought of what to do until I was met by my best friend Steve who was joining with me for the next three days of the walk. Time for a dry lunch in a cafe and then a look around the castle. 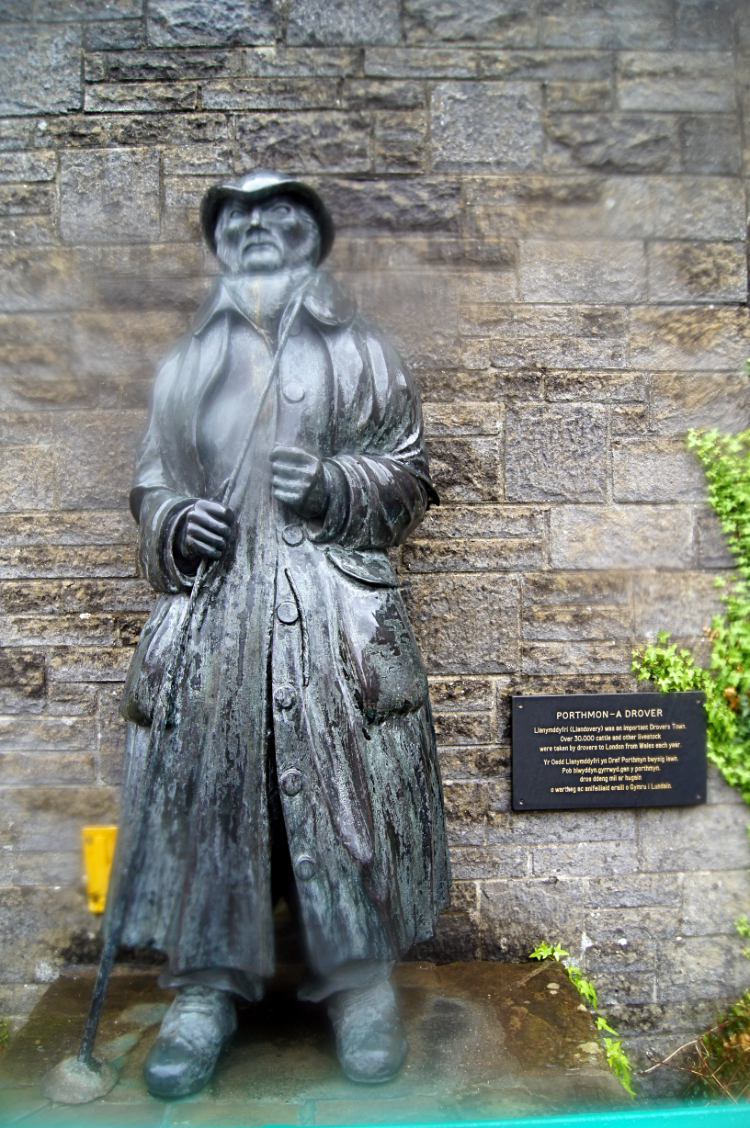 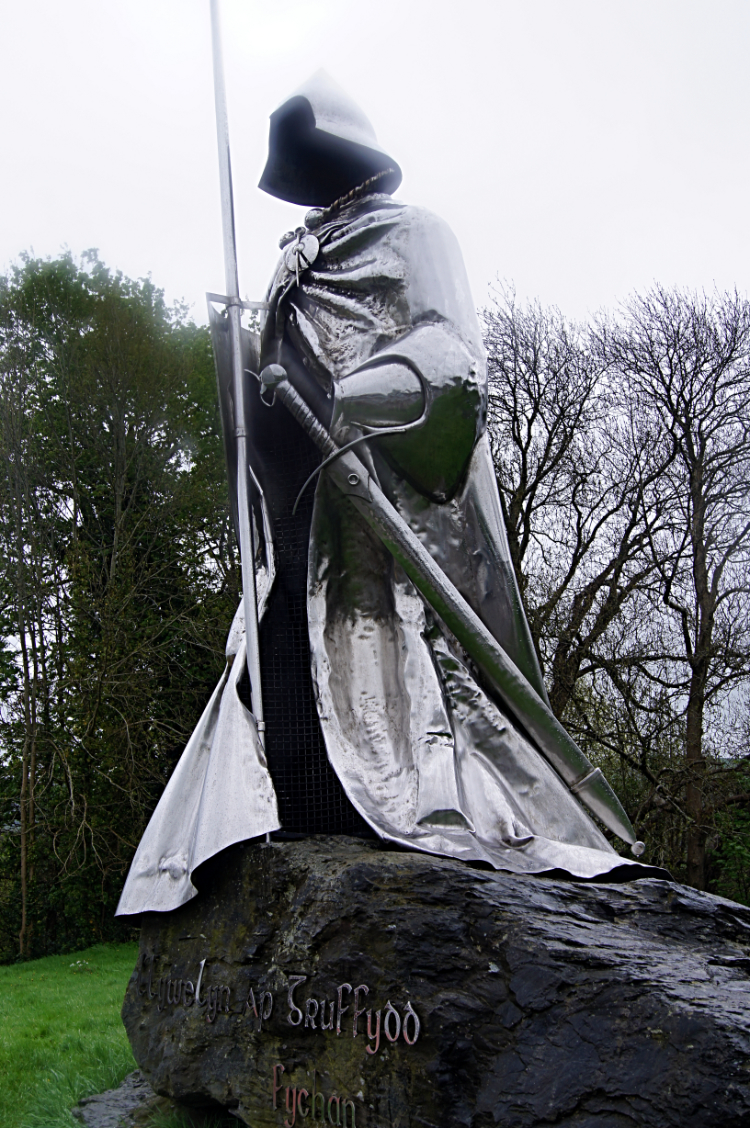 After lunch I arrived at the castle where two statues captured my attention. The first was titled 'Porthmon, a Drover'. These were hardy men who delivered livestock around the country and they were instrumental in the history of Llandovery and essential to its revival of fortunes after the destruction of Llandovery Castle and much of the town by Owain Glyndwr's army in 1402. Llandovery recovered as the trade in livestock from Wales to London developed. As luck would have it the location of the town was on the main drovers route from the south-west of Wales to the English capital. The second statue, of Llywelyn ap Gruffydd Fychan stood high on a grass bank of the ruined castle. A hero to the town he was martyred in the drive for Welsh Independence when executed in Llandovery by Henry IV of England in punishment for his support of Owain Glyndŵr's Welsh rebellion. Following the success of a certain film depicting the life of Scottish hero William Wallace, Llywelyn ap Gruffydd Fychan who led a similar life and who met a similar end is now known as the Welsh Braveheart. 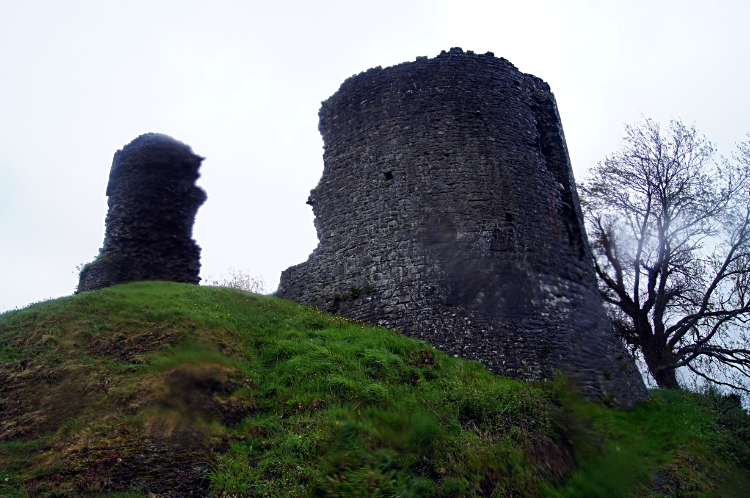 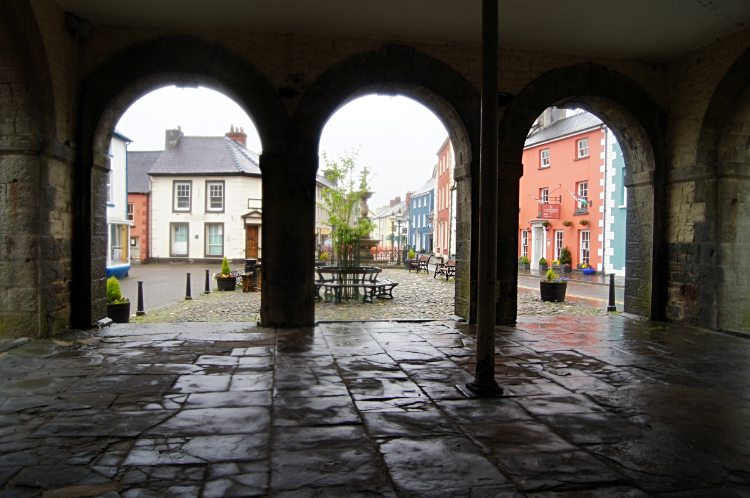 From the statues I walked in and around the ruins of the castle. I didn't stay too long though as it continued to rain and afterwards I sought shelter of a covered part of the old market hall to await Steve's arrival. We were in contact by mobile phone now. He was on his way from the Midlands to pick me up as we had booked accommodation for three days in Brecon. We would then use public transport or private taxi to get us to and from our starting and finshing points. While waiting for him, he was due at three o'clock, I had the daily newspaper in hand and after reading it to catch up on what had happened in the world over the last two weeks I tried to complete the Times crossword. I cannot remember if I did finish it or not. I have around a fifty percent success rate. A little after three Steve arrived and we headed for Brecon. We would be back at this very same spot tomorrow morning.

Footnote: So now the mid Wales chapter of my Wales Coast to Coast was done. Sixty eight miles completed over five days. In summary. No sunshine. A lot of rain. Quite a bit of mud. Lots of road. Some pain in my feet. Not good eh? Carrying on with the summary: The hinterland moors, melancholic, thoughtful, beautiful. Plymnimon. Awesome. What a sight. Having the moorlands to myself. Brilliant. Exceptionally so. Devil's Bridge waterfalls and the scary steps. Unforgettable. spectacular. Cracking. The people I met in Pont Rhyd-y-groes, Pont Rhyd-y-groes, Pontrhydfendigaid, Tregaron, Llyn Brianne and Rhandirmwyn. All good, all making the walk better for the conversation. And in some way the gloomy weather made the experience all the more fitting. I hope I have such good memories and impressions to take from the south Wales stage I start tomorrow.