Summary: This popular walk is promoted by the Calderdale Tourist Office. It is clear why for the walk appeals to all grades of walkers with much of it on National Trust land. Most visitors are families who only walk a short distance from New Bridge into Hebden Dale. Many will not go beyond Gibson Mill. A shame for there is much more to be enjoyed further on like Hardcastle Crags themselves. For the more adventurous there is the walk out of the dale onto Wadsworth Moor crossing into Crimsworth Dean which leads back to the starting point. A lovely half day walk. 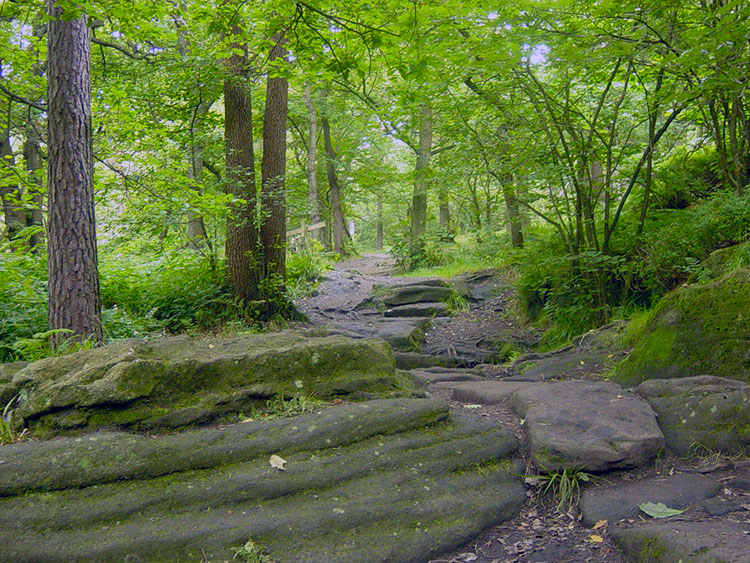 National Trust woodland at the beginning of the walk 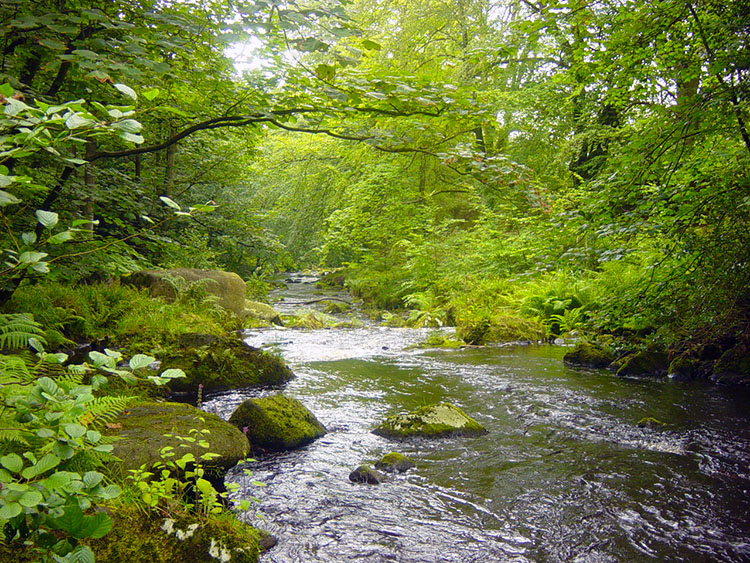 Hebden Water is a prominent feature of the walk

I had walked to Hardcastle Crags before, without the camera, and before this site was established. On that occasion I walked up Hebden Dale past Gibson Mill and onto Black Dean before following a road all the way back. I made a much better choice this time spending all the walk on paths and completing a perfect circular (except for an intentional spur to the ponds near Gibson Mill). One enduring memory of that first time was the hassle I got from flies in the woodland. Their offspring were to be my only complaint this time around, a common hazard when walking in woodland during the English summer. 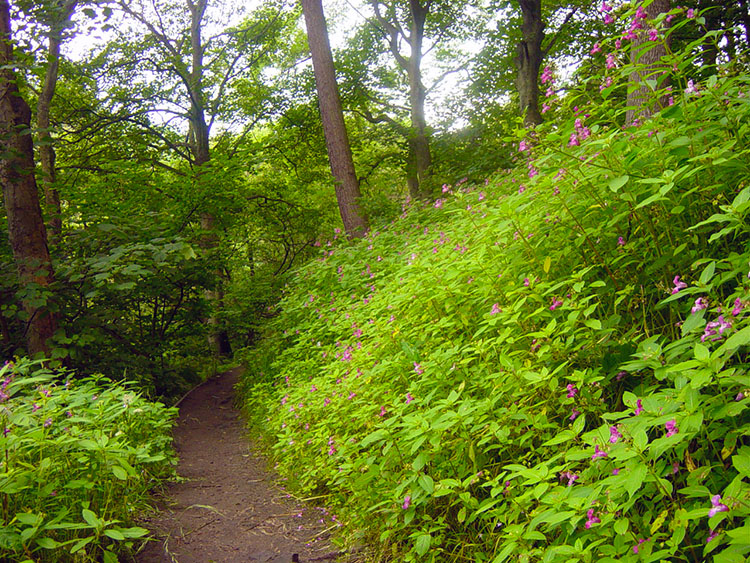 Rich summer foliage is all around near Hardcastle Crags 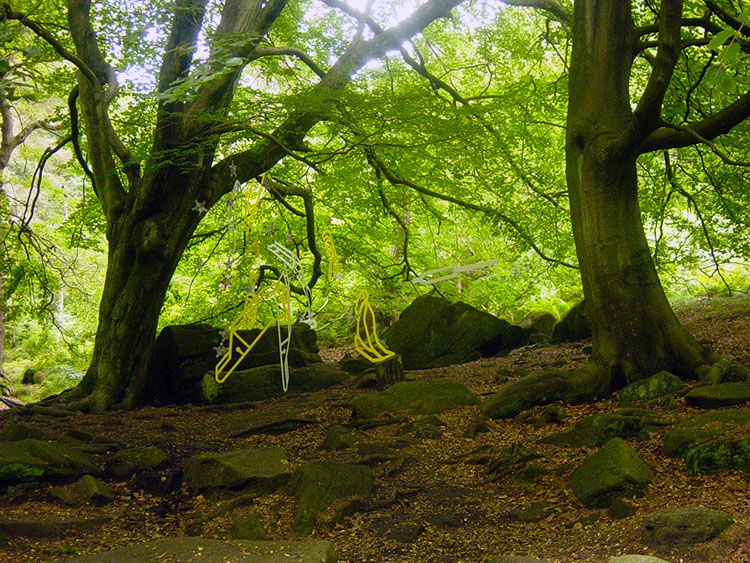 Interesting shapes were to be spotted on the walk

I set off from New Bridge and during the first mile I passed lots of people. There were mature couples and mature parties. There were young school or adventure groups. There were embracing couples. There were a number of families. The children were often playing in the shallows of Hebden Water. I remembered my childhood, I was always drawn to the shallow water too. I expect most of us were. It was a pleasant walk through the manicured National Trust woodland watching these groups enjoying themselves as much as I was. It was right for all of us to be enjoying the beautiful natural surroundings we were sharing. As I walked I also saw lots of strange sights. There were cardboard cut-outs hanging from trees and card sculptures all over. There was also a cut-out of a boy fishing hanging from a tree directly over the water. On the far bank a home had been fashioned for him. The goblins had been mischievously placing objects in the woods. 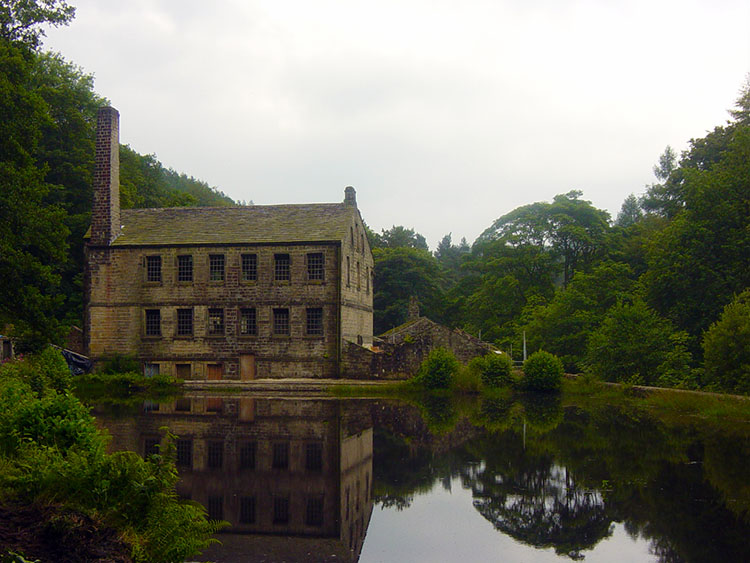 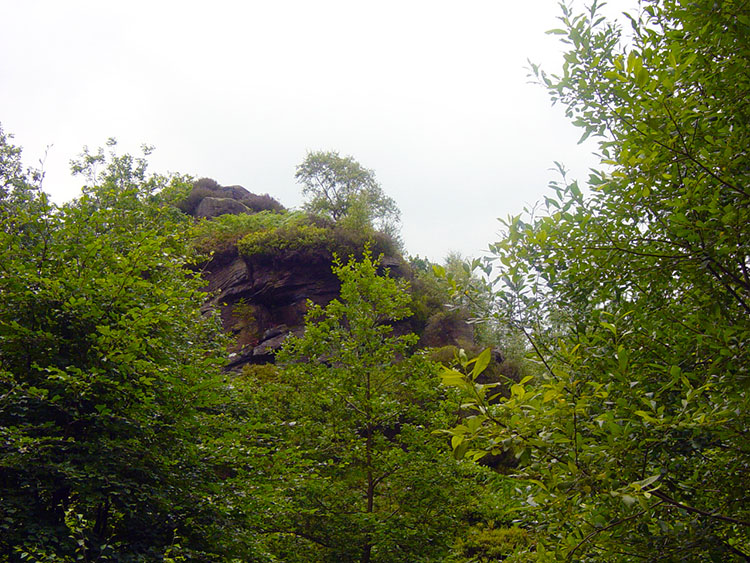 As I walked further the crowds thinned out and the strange sights disappeared. Soon afterwards I reached Gibson Mill. The mill began cotton production in the 19th century. I did not find out when production ended for the building was been renovated. The picture I took of the mill does not show any signs of work but there was extensive scaffolding on the other side and lots of activity going on inside the building which was blocked off to the public. The packhorse bridge was also closed and the builders had erected a temporary bridge which I had to cross to visit the mill ponds on the western bank of Hebden Water. I enjoyed a still moment at the ponds then retraced my steps back to Gibson Mill via the temporary bridge. I did want to find out about the mills industrious history. I'll call again one day. Time to move on to Hardcastle Crags. (note- On that first walk I mentioned I had visited the mill but missed the crags for I had crossed over the packhorse bridge, walked past the mill ponds and continued onwards on the western bank of Hebden Water. It was only after I had reached the point of no return that I had realised that I was on the wrong side of the water. I was not going to make the same mistake again) 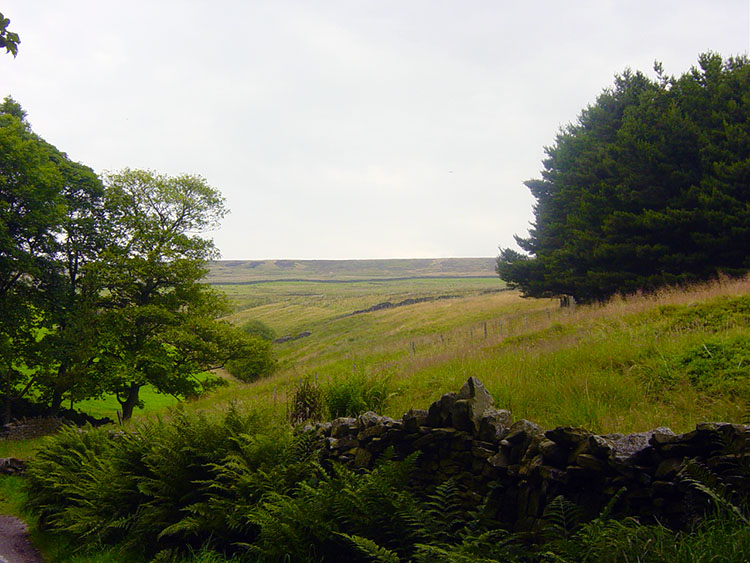 Up on open land at Walshaw 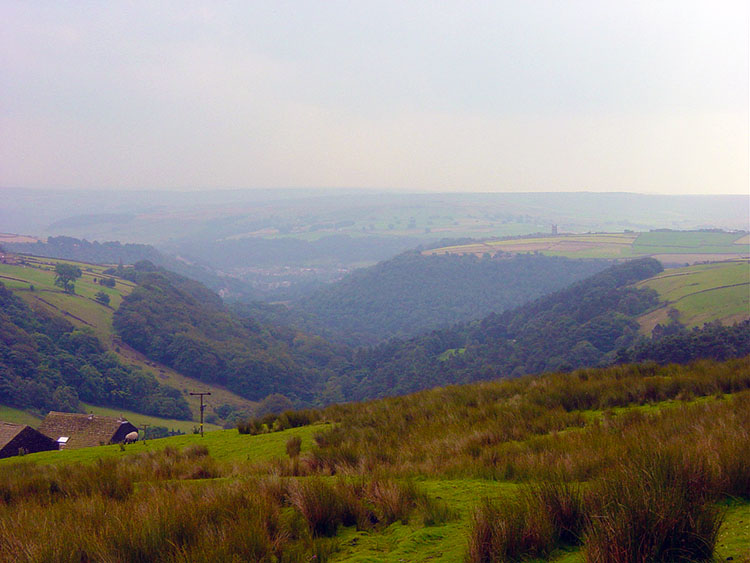 On the Calder Aire Link near Shackleton Knoll

I soon reached Hardcastle Crags after walking up quite a slope along a bridleway from Gibson Mill (it was stiff enough to get the lungs working efficiently after the gentle valley floor walk). When I reached them I had to search them out for they are shielded from the path by trees and quite deep growth. In fact all you can see from the track is the top of the crags poking out of the undergrowth. I made an attempt to explore them but it was very wet in the vegetation and I soon gave it up as a bad job. There are no paths made by the trust to allow you to explore them properly which I found a shame, especially as all the signs from in the area signify 'Hardcastle Crags' over any other feature of this wonderful walk. After giving up my exploration I walked further up the track and soon emerged out of the woodland at Walshaw. What followed was a nice walk over Wadsworth Moor. As I crossed over the top I got great views of the Stoodley Pike Monument in the far distance. Soon after I began my descent into Crimsworth Dean. This was a lovely finale to the walk as I walked back down into National Trust woodland and followed a bridleway all the way back to where I had started. 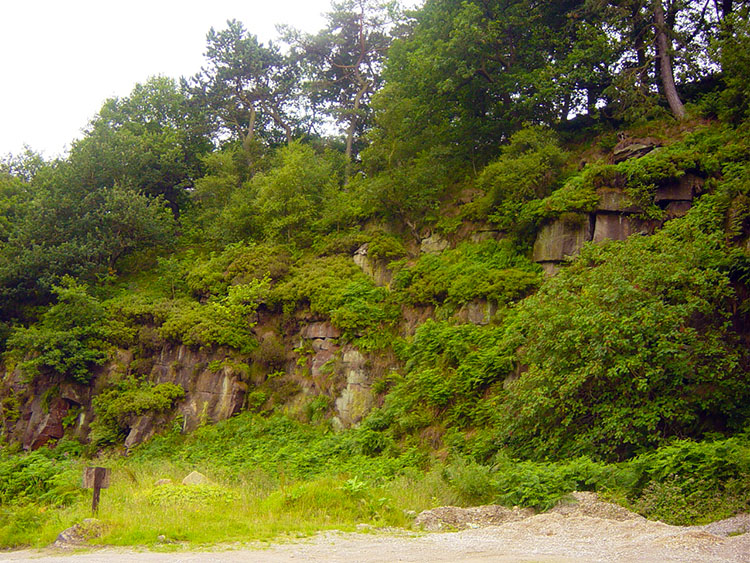 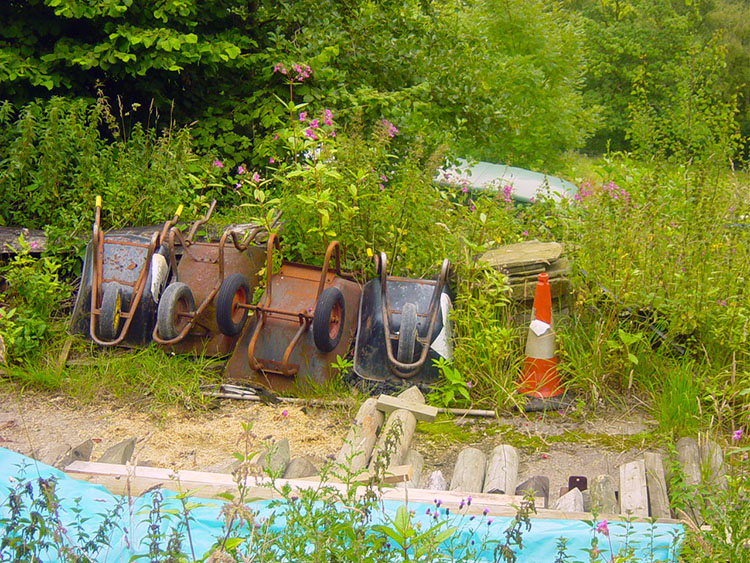 What is the collective name for a group of wheelbarrows?

The final bridleway section had me enjoying a couple of interesting moments. First I delighted at a rock outcrop and invasive greenery towards the end of the bridleway and then at the very end I was amused to find a row of wheelbarrows of different age and quality in a line outside a property near Horse Bridge. An amusing finale. And so to resume the walk:- Despite the slight disappointment at Hardcastle Crags this had been a special walk with some great walking in spectacular woodland which was a mixture of deciduous and pine conifers. Add lovely waterside scenes to complete the package.