Summary: Todmorden is an odd place. I never really know where to place it. While the town is located within West Yorkshire the residents of the town have a Lancashire postcode (OL for Oldham). And it is a fact that most of its sporting teams play in Lancashire leagues as Burnley and Rochdale are closer than Halifax, Yorkshire's nearest equivalently sized conurbation. This walk, at least when it was walked in the early summer of 2018, sits mainly in Yorkshire though it runs along the Lancashire and Yorkshire border at Pudsey Clough. From Todmorden the walk heads north to Bride Stones Moor and explores the remarkable naturally sculptured Bride Stones, then continues to Hawk Stones. Heading north west the walk reaches the county border at Stiperden House Farm and then follows the borderline southwards along Pudsey Clough to Cornholme. Then the walk concludes by meandering east along the Upper Calder Valley back to Todmorden. 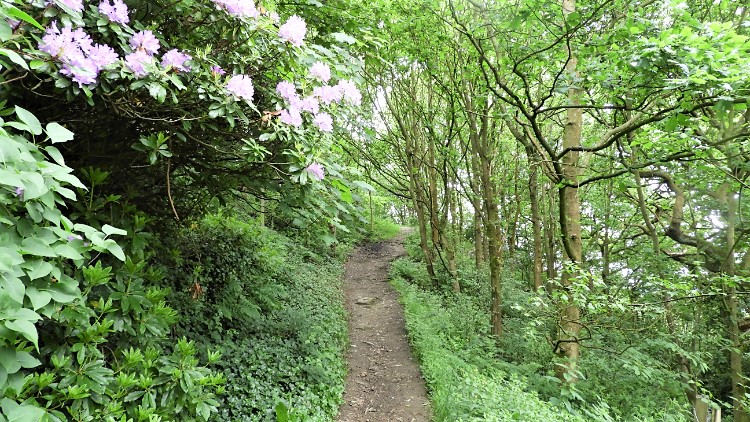 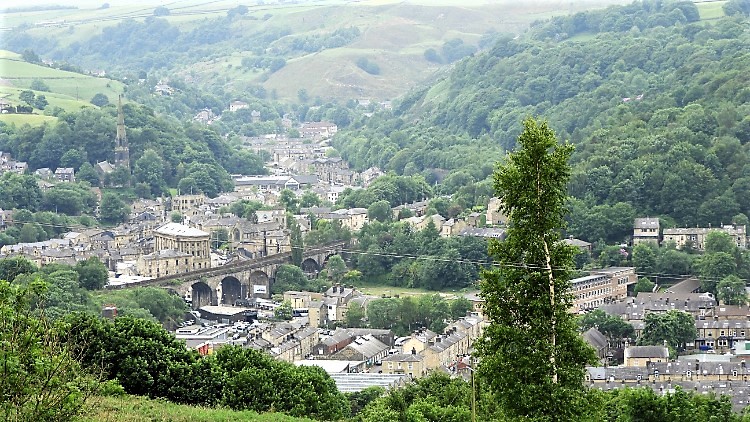 Off I went, climbing out of Todmorden. There is no other way out of the town which is nestled deep at the confluence of three steep-sided Pennine valleys. No problem, I like climbing. Personally I prefer to climb at the start of a walk rather than at the finish. So all was good and I was heading up to the enjoy the views height gives anyway. After following a few streets on the climb out of town I crossed a footbridge taking me over the Calder Valley line which links Leeds and Manchester. Beyond the railway line I followed paths, lanes and roadsides to the isolated community of Delph, 60 metres higher than Todmorden. In a nearby clearing I was presented with a tremendous view back down to the town. It was a magnificent sight to enjoy. I could clearly see the line of the valleys heading from the town as lines of buildings nestling within them showed their course. 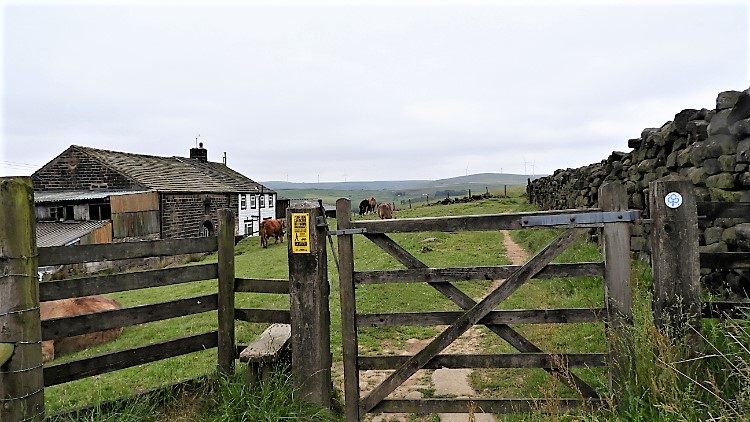 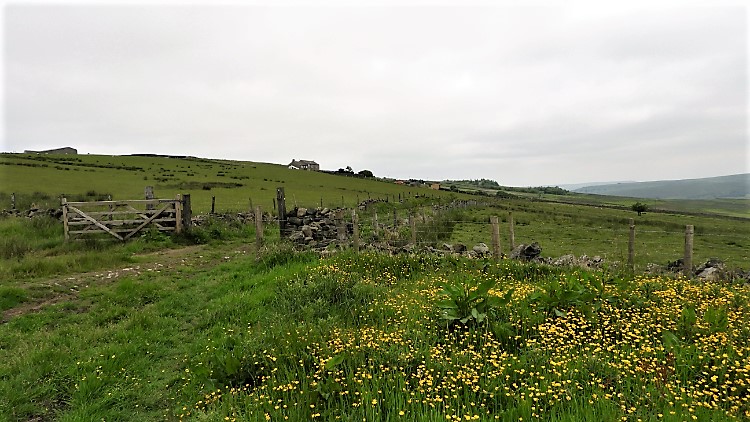 From Delph I detoured on to a nearby hilltop which was covered in exposed gritstone. They were the first sign of what is typical of the hills north of Todmorden. The Bride Stones may be the highlight expected but the area is riddled with impressive gritstone outcrops. These unnamed examples were the first. From the short detour I returned to my course, following leafy avenues to East Whirlaw from where I hit the open moor. Early day cloud had still not cleared but on reaching the moor I did spot the first breaks of blue sky between the parting cloud. "Come on sun" I urged, wanting to enjoy the Bride Stones in sunlight. First though, the moodiness of cloud swept moor could be enjoyed which is exactly what I did as I climbed past Whirlaw Stones to Whirlaw Common and then further to Windy Harbour. Here, at a crossroad of paths, I took the left fork heading due north up a metalled country lane towards Eastwood Road. To the Bride Stones. 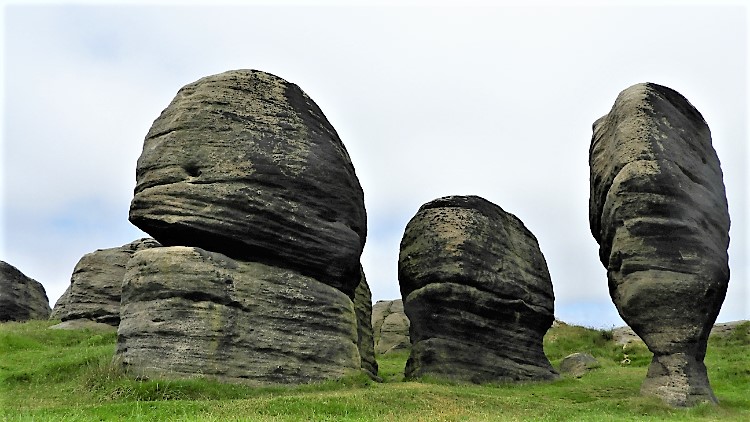 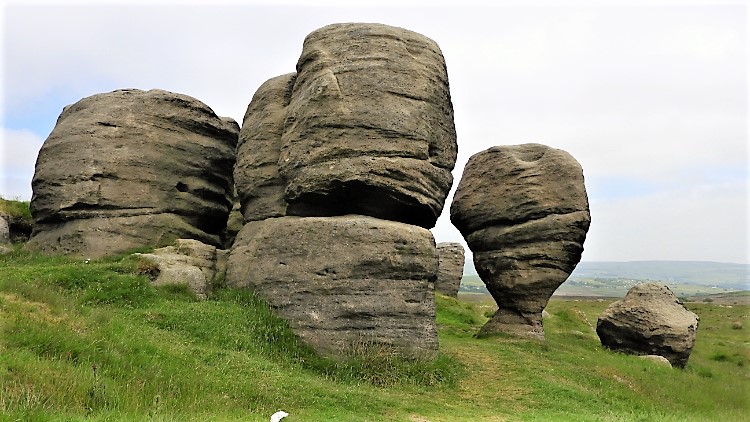 A few cars were parked beside the path leading across the moor from Eastwood Road to the Bride Stones. I could see them from a distance. When I reached the path myself I walked slowly towards the stones. The sky was breaking more but cloud still persisted over the stones. "Bugger off" I thought. I stood at times, hoping for the clearing clouds to hurry and then I ambled along the access path a little more. Suddenly I was stopped by something shining in the breaks of glinting light, something which should not be there. "Can't be" I mused but it was what I had thought. In wispy, new growing grass beside the path was a relatively new Bank Card. The expires date was much into the future, this one had been lost in error. I picked it up, resolving to surrender it at the relevant bank as soon as my walk was done. Good deed done I walked to the Bride Stones, a delay I could no longer handle. Though cloud still draped over them on my arrival I was to stay long enough to enjoy them in sun. There was no way I was walking away from these marvels without exploring. 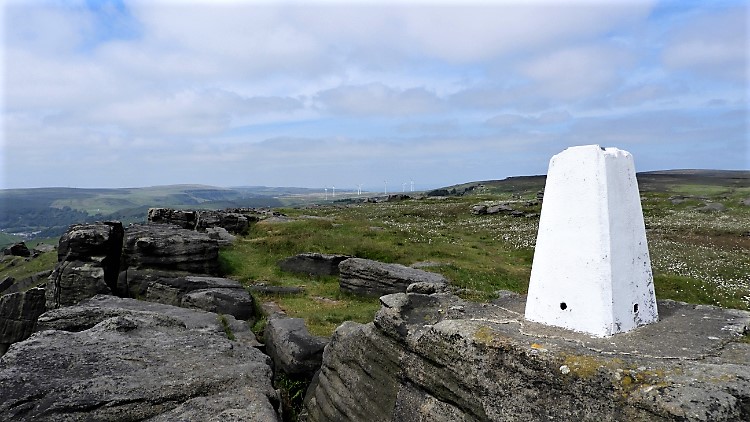 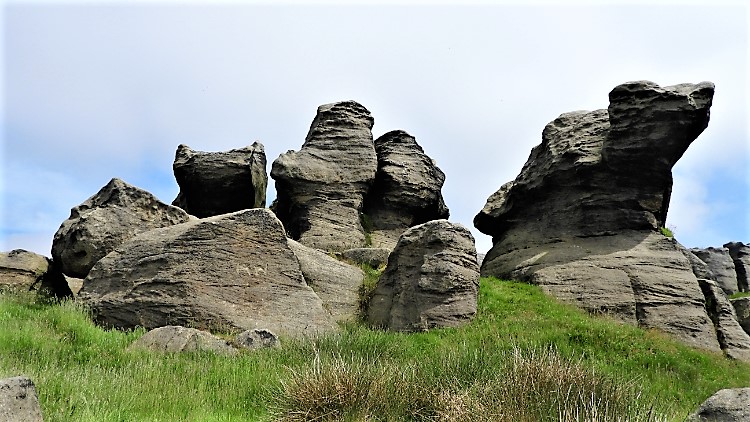 Spot the slug amid the Bride Stones

It was fourteen long years since I had last been in the midst of these magnificent naturally weathered stones. I had visited the more well known North York Moors Bride Stones since and handsome though they are these West Yorkshire Bride Stones are my favourites. They are more diverse in shape from rounded balls of stone which defy gravity by still standing to stones which are shaped like animals and insects. Some are tabular, as if shaped by a mason and some are erratic as if no one cared. Some are collapsed and some standing as they always have. I explored around, around and around. As I did so I must have put another kilometer or so on to my walk. Not that I cared. I was in full enjoyment and though a few more admirers, dog walkers and curious visitors came to the site of the Bride Stones it was never a crowded place. It was as peaceful and undisturbed as it deserved to be. 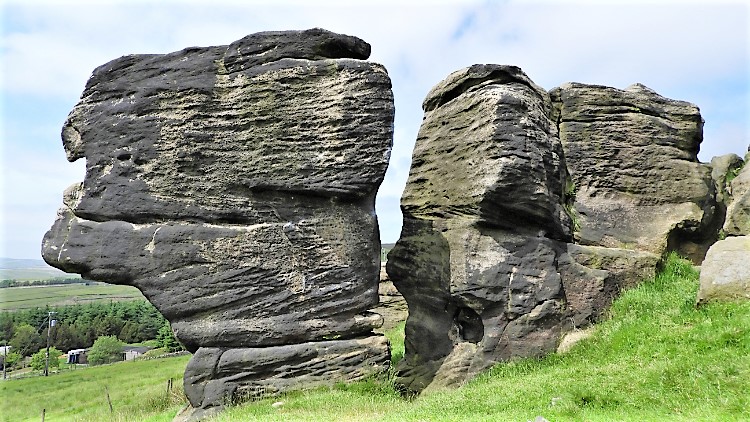 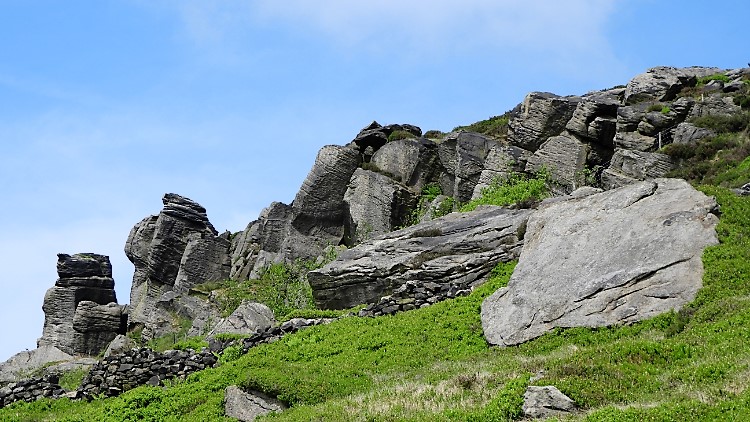 I was at the Bride Stones for over half an hour. It seemed like minutes, so enthralled and captivated by it all. "I shall come again, and bring Lil" I resolved to thought. Being not too far a walk from the road she would love it. That plan was banked. Then I left the Bride Stones for this time and headed on the path north-west to meet the top moor road which led me on a due west course to Lancashire. I would be crossing the county border by crossing a brook but first I enjoyed the view up to my right, the view of the Hawk Stones, a series of exposed granite rock on the 440 metre erosive line of Stansfield Moor. One item looked out of place. It was not a rock but in fact a ceramic toilet seat anchored on the moor and supporting an aerial. One way to get a clear signal up here I suppose. 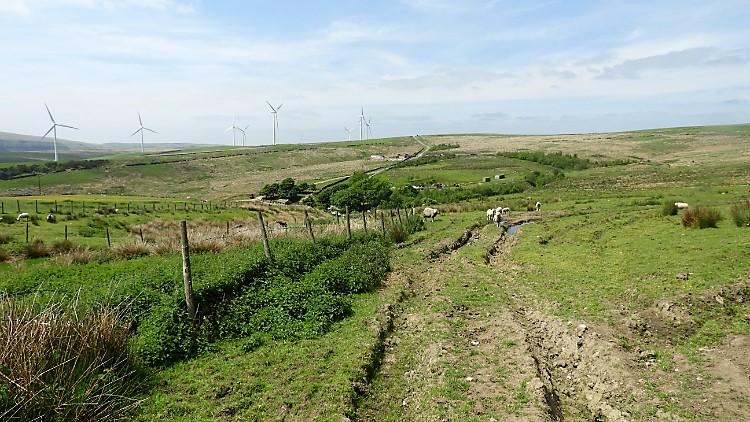 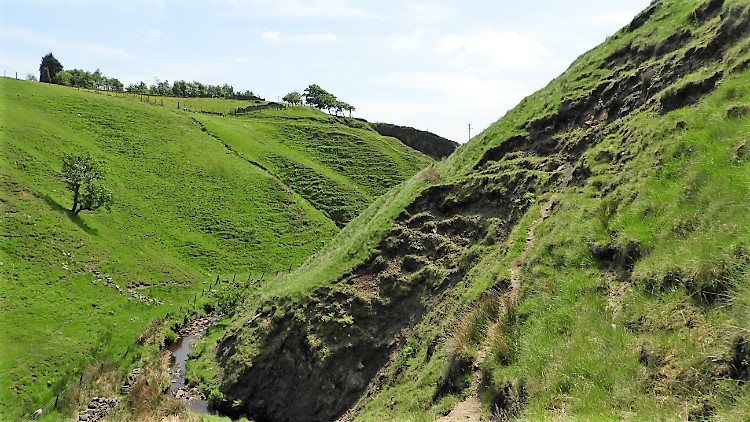 From leaving the road near Upper Mount I walked on a lane down past Bank Top Farm, oddly named as it was half way down the bank, towards Stiperden House Farm. Here I arrived at Paul Clough which would become Pudsey Clough a little further downstream. The clough, part formed by springs from Yorkshire and part formed by springs from Lancashire serves as the Yorkshire and Lancashire border. I went down to the watercourse and played at jumping between the counties. The clough was deep set in between two banks, at one point a series of interlocking spurs. Along with ox bow lakes, interlocking spurs are the abiding retained knowledge of early school geography lessons. I love the reminders of those moments of captured knowledge and that I so enjoy being at one with the real life examples. 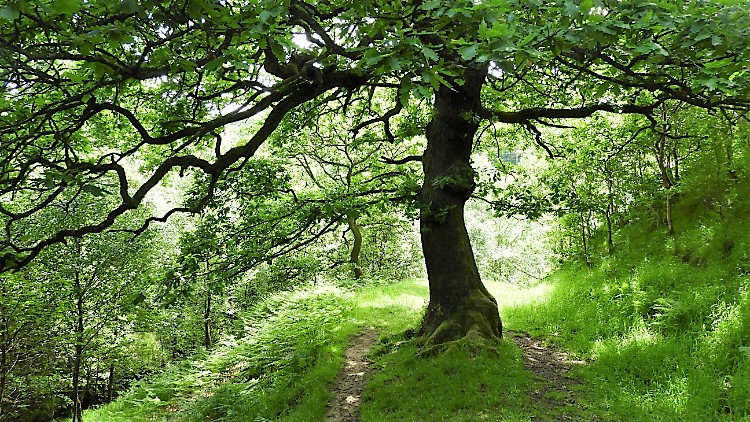 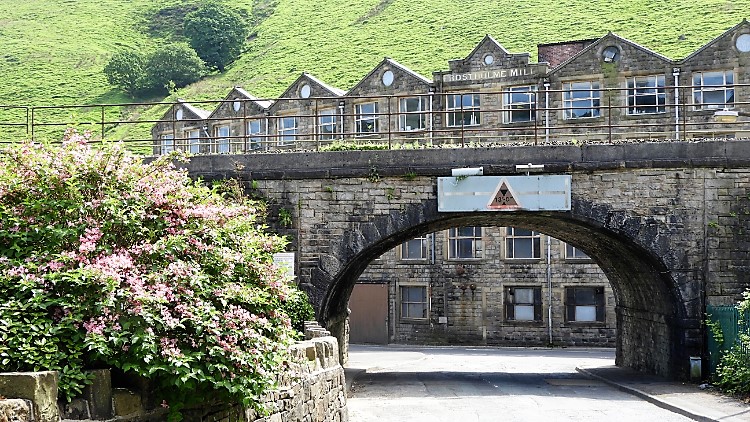 While I was following Paul Clough/ Pudsey Clough I was also following the Burnley Way, a long distance footpath I had last followed during my Burnley Arts Trail walk. I continued down from the moors by way of Pudsey Clough, rugged openness giving way to pastoral tree lined brookside walking as I walked. While doing so and by being on a path following the west bank of the clough I was in fact walking in Lancashire. As I continued my walk the fresh green colours of spring began to dominate the setting, specifically after dropping below 250 metres elevation and even more so as I crossed back into Yorkshire by a bridge in Nant Wood, soon after reaching the higher terraces of cottages which signalled my arrival in the hamlet of Pudsey. Birds were singing prolifically, the sounds and smells of new Spring filling the air. It was gorgeous. I passed a few local residents as I dropped into the Upper Calder valley. Bar myself nobody seemed particularly hurried. I reached the valley bottom by going underneath the railway line this time, near to Frostholme Mill, no longer an industrial enterprise, housing a few local businesses now and surely destined to be homes for some of the local population in the near future. 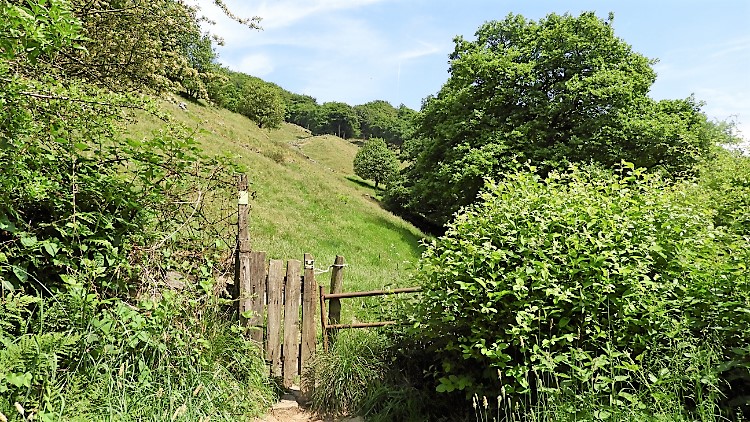 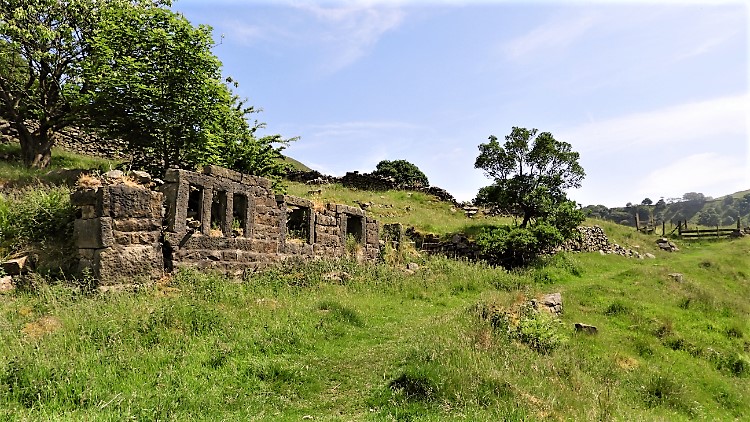 The walk to the moors from Todmorden had been a good one, effort to fitness and enjoyable at the same time. My time at the Bride Stones had been everything I had hoped, very special and memorable. The walk along the county borders during my descent from Paul Clough through to Pudsey Clough had been brilliant too, so much beauty. What next I thought as I walked along the industrial landscape of the Upper Calder, run through by the tributary road and filled either side by homes, mills, churches, small parks and with a scattering of local amenity shops. I liked it a lot, the buildings were all of local stone, all built by those old masters, not like the throw up new build of today which I would personally never live in. The Upper Calder Valley looked solid and it looked permanent. It looked right. I had walked along the valley floor roadside for 500 metres before climbing from it to follow the loveliest of paths on a line parallel to the course of the valley, a line around 40-50 metres higher. The path crossed fields, travelled through woodland and along lanes for just short of two thoroughly enjoyable and pretty kilometers before dropping back down to the valley floor just west of Lydgate. 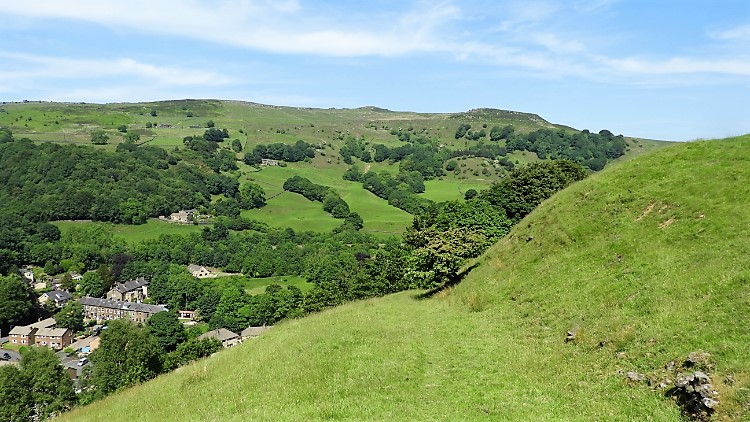 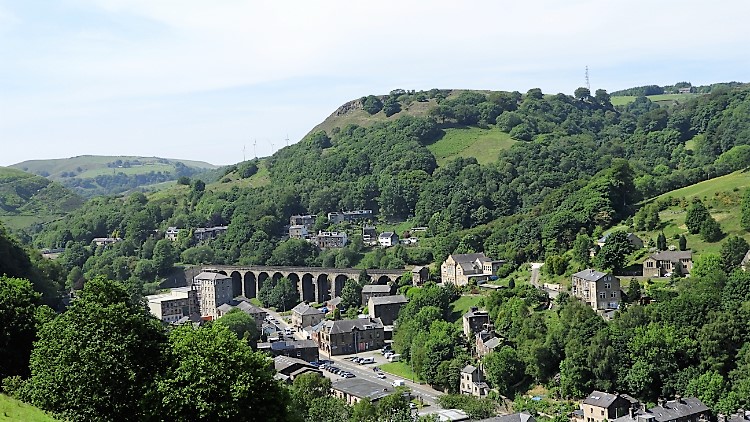 Another thrill of the walk was revealed to me on crossing to the Upper Calder Valley south side. The course of my walk led me up a bridleway and from there into a field on the south bank of the valley. The path led me around the contour of the field, a path covered in resting sheep. Rather than bother them, a lot having lambs, I cut off the path and set upon a point where I needed to reach anyway, on the crest of the bank, atop Robinwood Hill. It had been a quite tough 50 metre ascent from the valley but as with my reward at Delph earlier in the day when climbing around 50 metres had given me great views of Todmorden, this time I was presented with super views of the Upper Calder valley and most startlingly of Lydgate. What a stunning place, centerpiece being an impressive railway viaduct. Buildings of all types; industrial, spiritual and domestic were set within a deep and light green frame, a natural frame of springtime colour. Yet more gorgeousness on my walk. And still I had one more treasure to enjoy. 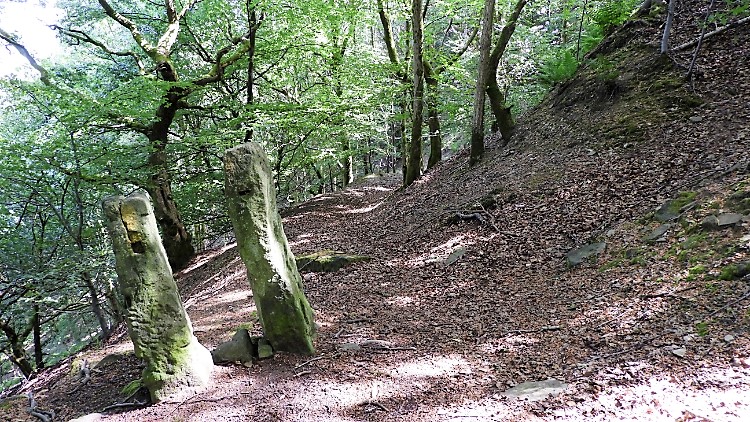 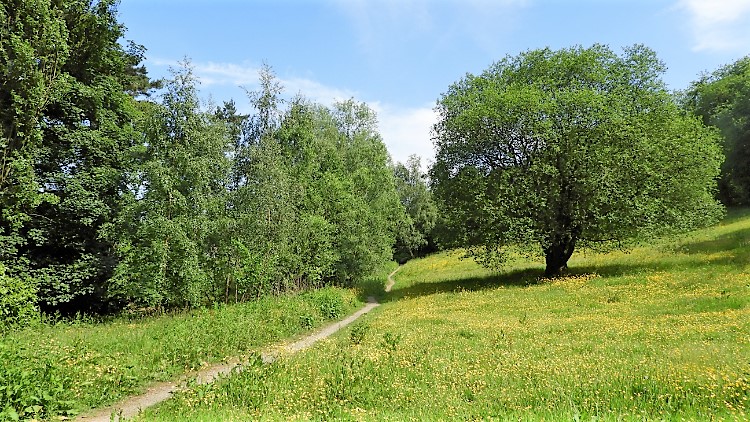 First I had to walk through Robinwood, a scene of total contrast. On my eye-line and above me were the lime greens of a growing spring wood. At my feet were the dull browns of dead last season foliage. I had view of the full life cycle of a leaf as I walked along the meandering path in Robinwood. From the wood I was led to a lane which took me back to the Upper Calder Valley once more. Then I was forced to walk alongside the main road for about 400 metres before I was allowed into Centre Vale Park. The finale of my walk was upon me. It did not disappoint. Todmorden's premier park is a lovely place, especially as I saw it on this sunny springtime afternoon. The park meadows up towards the ridge were blankets of green and yellow; grass and buttercup. I smiled as I walked through the park and I smiled as I walked back through Todmorden to finish my walk. I could not stop smiling.