Summary: Take the distance I have put in the statistics for this walk with a pinch of salt. Were you to follow the route without deviating it would be about right but my actual GPS route file shows I walked 5.2 miles and not the 3.8 miles indicated. That is because I was wandering off the path all the time to explore the woodlands, follow the stream beds and generally dilly dally on this most beautiful of walks. Found just south-west of the city of Bradford and surrounded by more industrial towns of West Yorkshire, this walk is a jewel. The woodland trails are divine and the countryside gorgeous. The hamlet of Low Bentley and village of Norwood Green are very pretty too. There is beauty all the way around. 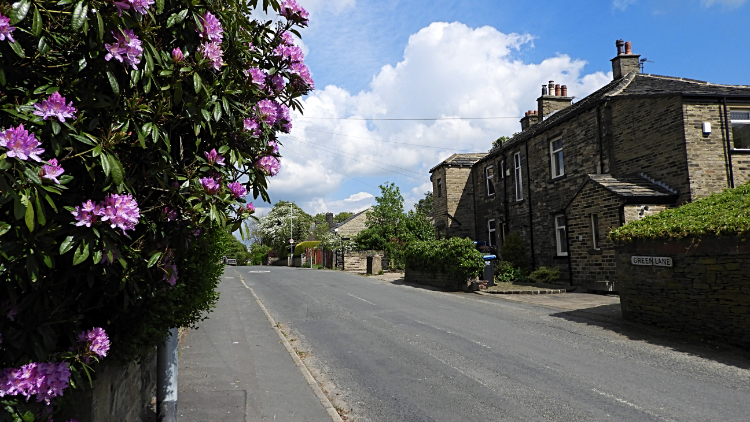 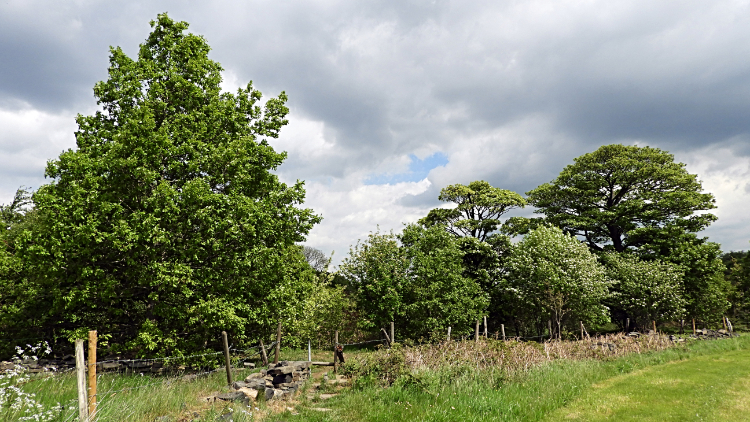 Walking the path from Low Bentley

To find a walk with such beauty in the heart of an area of industry and urbanisation warms my heart. Shelf lies in an upland area between the city of Bradford and the large town of Halifax in one of the busiest areas of West Yorkshire. Yet Shelf never seems busy to me. It is true the roads are often busy, a fact I can testify to as I worked on nearby Halifax Road, Bradford throughout the 1990's. However, what I was to find on this walk was anything but hustle. Let's go shall we. After finding easy parking on quiet Green Lane I followed the road to Low Bentley, an assembly of scattered houses and farmsteads. I guess horse livery stables are a plenty around here. Following Green Lane from heading east to south and in doing so passing Riding Hill Farm I left the road at a pretty house with a pretty garden to follow a country lane east towards Judy Woods. Fields cleared of first season cut of grass were either side of my approach lane to the popular woodlands. 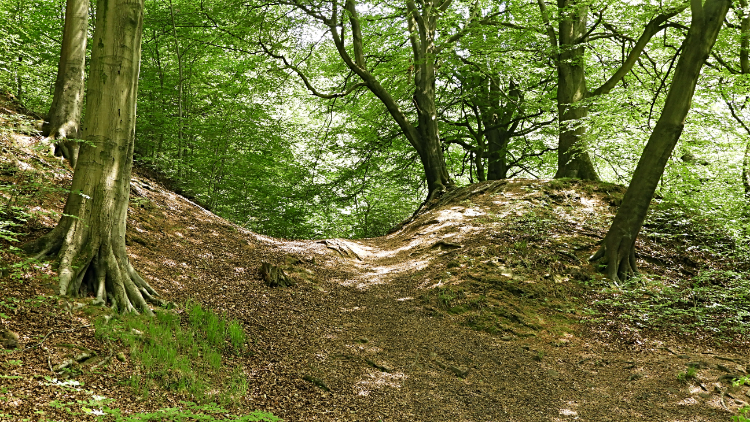 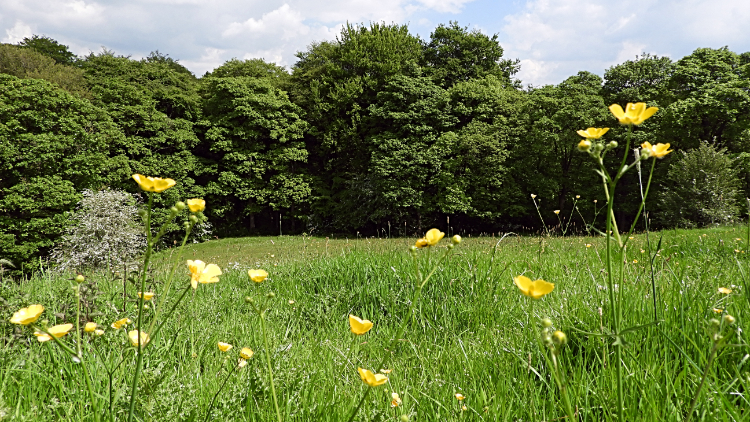 Crossing a stile gave me access into the spring green cover of the fresh woodlands and from my access point I tracked south on a path deeper and lower into the woodland. A series of steps led me safely down to the level of Royd Hall Beck which flows through the heart of first Jagger Park Wood and then Royd Hall Great Wood, two of several woodlands which are part of the Judy Woods collective. Being the 22nd May the woods were still full of Bluebells, always a leading attraction of the British Spring. Fresh grass was growing in young lime green colour too. One section of path, through young Alder and the like had been arranged into a series of natural archways to walk through. That was a lovely touch by the friends of Judy Woods. After an hour or so of wandering the paths in the woods during which time I had paddled in the beck, climbed part way up a tree, and edged up a bank to see the best display of Bluebells, I reached a stone bridge where a sign read "Parkin Pigs & Ginger Beer" Near to this site stood the cottage of Judy North from whom these woods take their name. The North Family had a pleasure garden which occupied part of the field to your left in the mid 1800s. A pear tree, from which the Pear Tree pub in Norwood Green supposedly takes its name grew next to her house where she sold ginger beer, parkin pigs and sticks of spice to visitors. Hence her nick name was "Stick O'Judy". When she died aged 70 in 1870 the gardens were broken up and the house demolished". The field is now a gorgeous wild flower meadow. I stood looking across it for a while thinking about Judy and the legacy she has left. She would be happy. 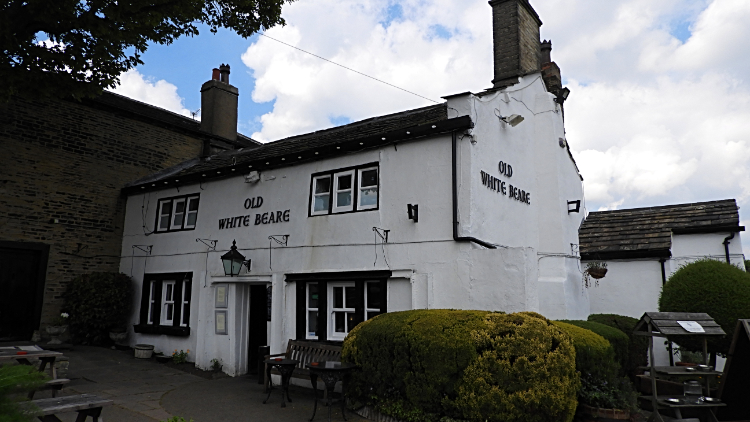 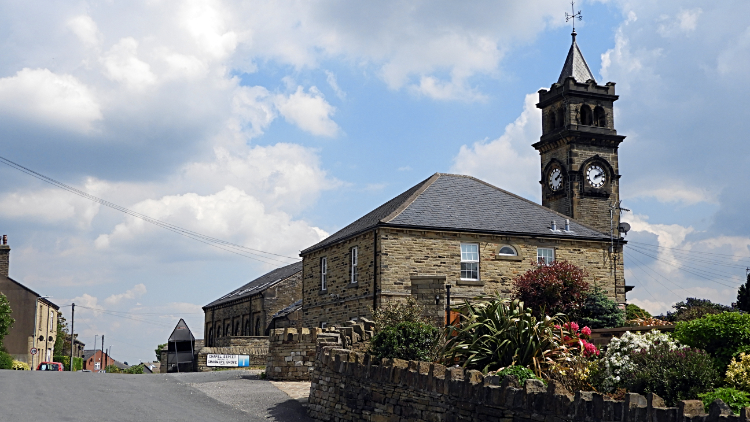 I had left Judy Woods at the flower meadow field and from there I followed a path, oddly laid in part with house bricks, towards the village of Norwood Green. A sign told me I was also following the Calderdale Way which I was to follow for the next stage of the walk through Norwood Green and beyond to Dean House. It was a very quiet walk through the village, known locally as the retirement village because it tends to attract folk who have had enough of an hectic life and who wish for peace and quiet. I am not saying that, I quote Wikipedia who state as follows: 'Norwood Green has declined in terms of liveliness, unlike its neighbours such as Wyke and Hipperholme. Earning the nickname the 'retirement village', due to its vast population of elderly. Many experiencing the fresh countryside and lack of people, agree Norwood Green holds a 'timeless and peaceful' atmosphere, free from noise and traffic.'. On my way through the village I passed the Old White Beare pub which was quiet bar a couple enjoying a drink in the beer garden. I also passed a Brighouse Boundary Walk sign and the impressive Clock Tower, part of the old chapel now converted to residential. True to the retirement assertion, my walk through Norwood Green had been nice and quiet. 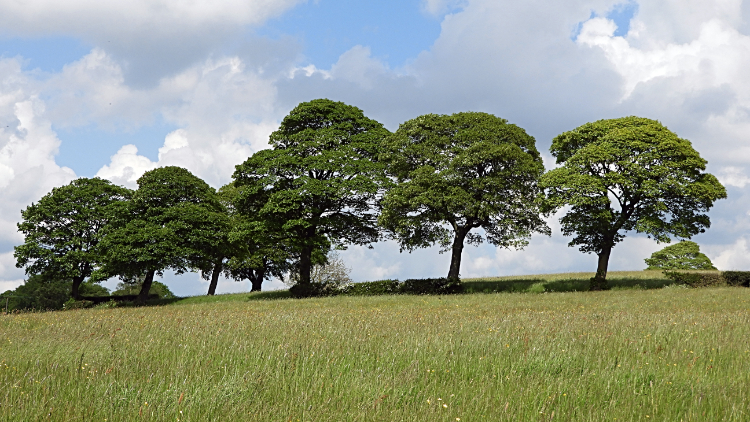 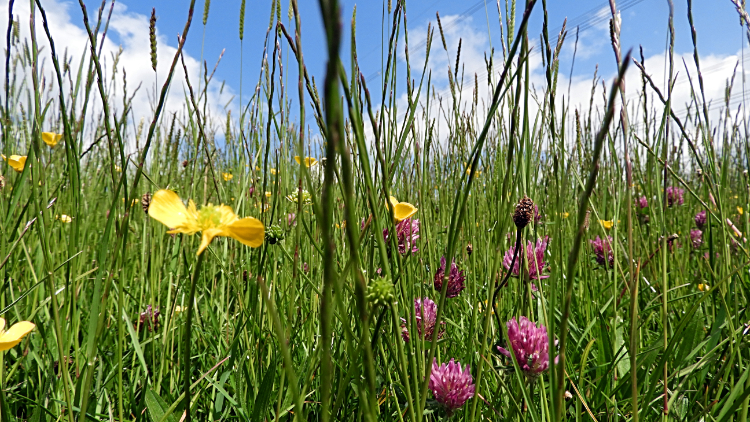 Back into rural idyll I went by leaving Norwood Green on a vehicular access lane leading north and lined with well kept houses, with large gardens all edged by substantial boundary walls. The houses were passed and the road narrowed into a pretty country lane leading to Middle Ox Heys and further on to North Wood. My word, it was so pretty with more colourful wild flower meadows prospering by the rise of sympathetic natural farming. Something I am glad to see more of as time passes. Everything was good on this delightful walk. As I walked the quite drone of Bees buzzing around and doing their pollination work added to the sense of rural bliss. So near to the city? Give over. 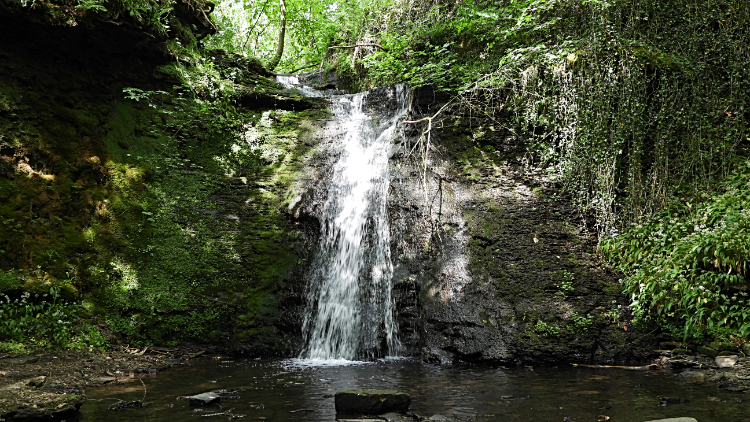 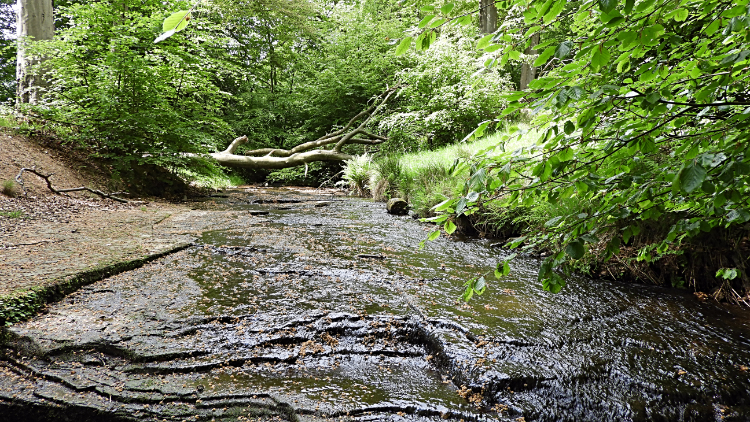 At North Wood, which I came to after crossing a field, I followed another good path set above a stream on a parallel to me. This was Wood Fall Beck which I would be following on and off to the conclusion of my walk. First I was about 20 feet above it; I could see it in the cut below to my left. Then I heard the sound of falling water and knowing it to be a substantial fall I worked my way on a path to the cause of the sound. I was near to a building called Dean House and though the waterfall has no name on the map I believe it is safe to assume the name of either Wood Fall Beck Waterfall in respect of its water source or Dean House Waterfall in respect of its location. Whatever, it is a gorgeous four to five meter small drop cascade into a round drop pool in a lovely dell setting. Much worth the effort of clambering down to and staying a while. After my private viewing I headed back up to the path, across a field to Dean House itself where I met a not too pleased farmer on an old restored tractor who did not want his picture taken. "What a superb tractor" I said and respecting his wishes by pocketing the camera he soon calmed down when I told him I was from a rural background too. "Don't like this change and all these people who gad about" he said. "I understand" I said. As I left though I was thinking that it is not going to get any better for him. All are entitled to this beauty. What can you do. 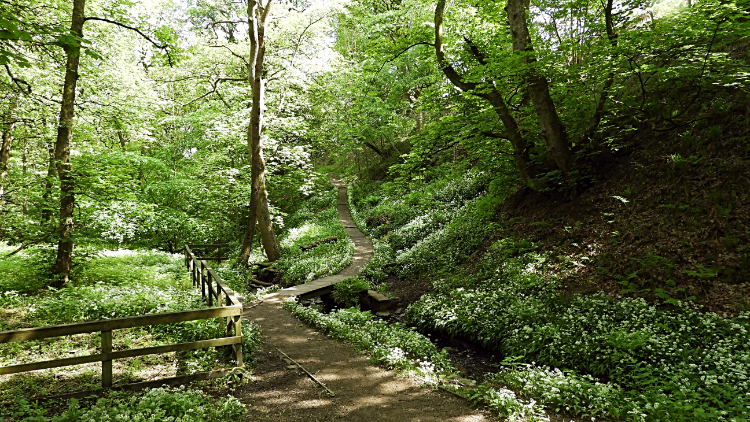 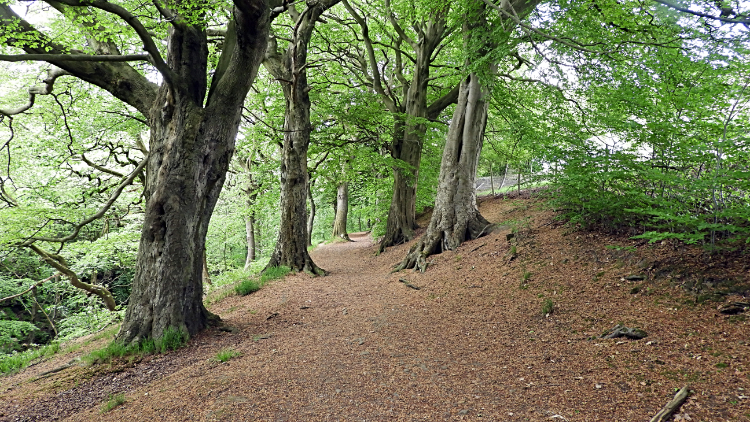 Continuing on through Wood Fall I crossed the beck at a pretty spot where a series of mini falls tricked over layered grit stone shelves. "Good spot for a family picnic" I though. The water was not much more than three inches deep, perfect for toddler paddling with Dad on duty while mum sat and watched them play. That was my imagination anyway, playing in the stream like I did at Cod Beck over half a century ago! Back to the present I climbed up to the path in Wood Fall, leading north-west and then north back to Brow Lane which naturally turns to being Green Lane where I had parked the car. My glorious brilliant Metropolitan Bradford woodland walk was over. What a find.