Summary: This walk is a pleasant three mile circular from Richmond town centre to ancient woodlands and wildflower meadows which are found to the south and west of Swaledale's premier market town. The trails are popular ones, managed by the National Trust and thus well maintained. Following the enjoyment of woodland and grassed flower meadows the walk is completed with an enjoyable walk beside the River Swale before climbing back into town for well earned refreshments.

The Walk: My wife Lil and I had travelled from Harrogate to Richmond for the day and as it was sunny and warm we decided a short walk around the scenic outskirts of town would be a good way to begin our visit. After a short look at my Ordnance Survey Explorer map we agreed a walk of woodland and meadow to the south and west of town over two hours would be about right. So with a smile on our faces off we went, walking down from the town centre towards the Green Bridge. 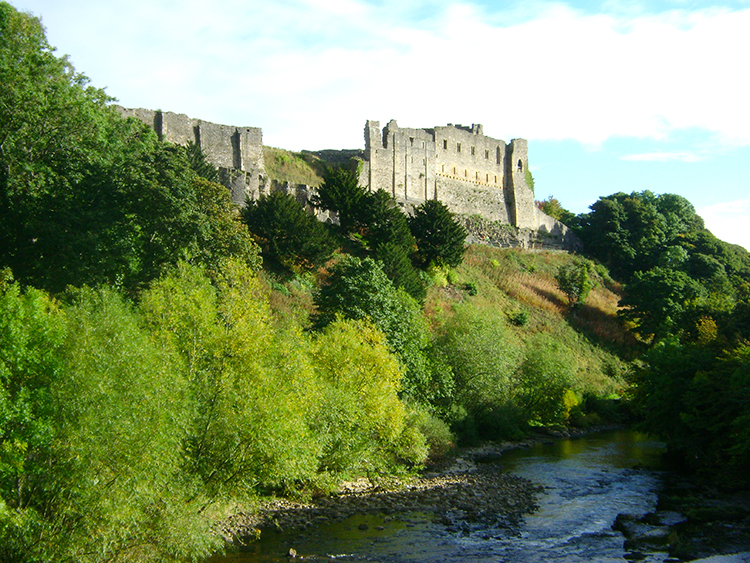 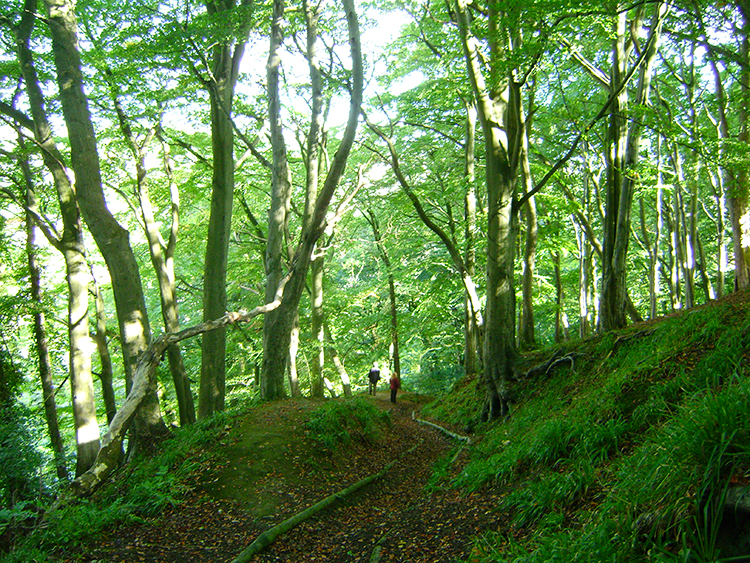 When Lil and I had crossed the Green Bridge an information board which read "Round Howe Nature Trail is a three mile circular route between Hudswell Woods and Green Bridge. The route follows riverside and woodland footpaths, with steep slopes in some places. The route offers trails of varying difficulty to explore the beautiful Swale valley with its ancient woodlands and grasslands". We viewed the trails shown on the map and decided on the long one of three miles, deciding to go the clockwise way, up to the meadows above the woodland with a return journey by riverside. Up we went and through the climb up Billy Bank was steep the paths were well maintained. Summer was turning to Autumn, leaf fall covered the path creating a natural carpet to walk over. 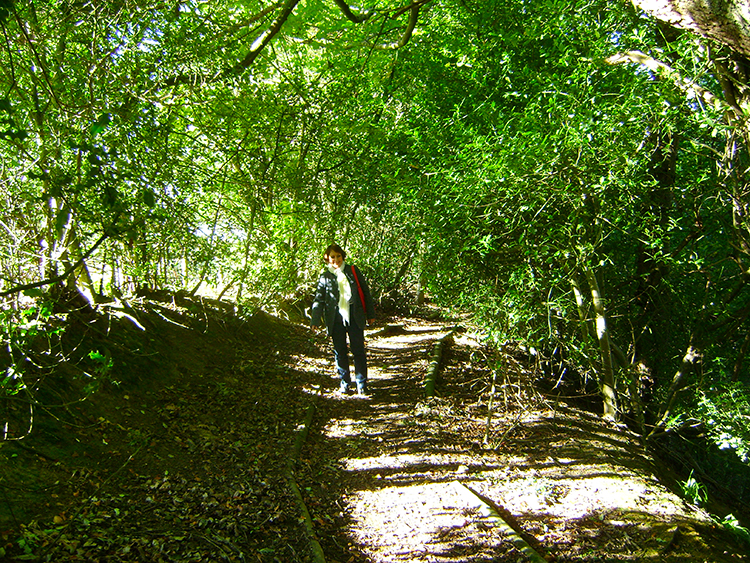 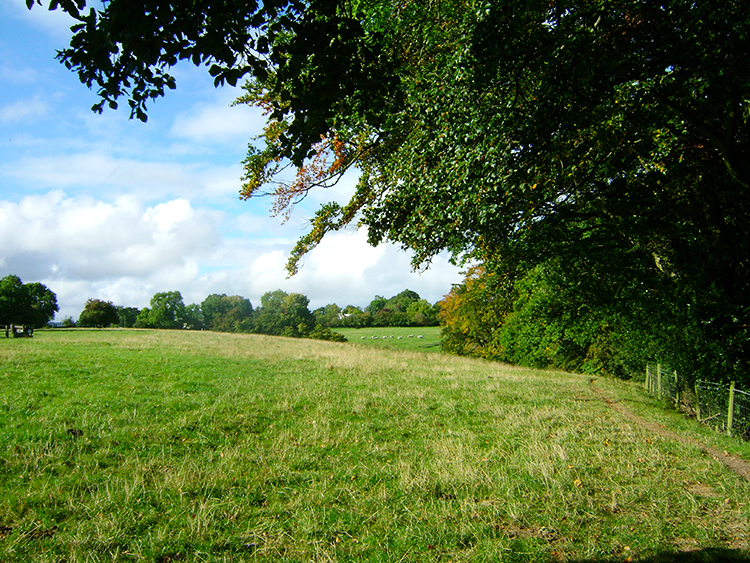 Despite the approach of Autumn, it was nearing mid October, the trees in Billy Bank Wood were still full of vibrant greens. I am convinced the season of summer is extending from what I remember as a boy. Lil and I enjoyed the walk through the woodland. The information board had told us it contained many species of tree which while dominated with Ash also included Oak, Sycamore, Beech, Lime and some conifers. Shrubs below the tree canopy included Hazel, Yew and Holly. Such a rich diversity which resulted in beauty. The climb through Billy Bank Wood was an absolute pleasure. And the pleasure of our walk continued as emerged into the the meadowland beyond the south fringe of the woods. A warm October sun welcomed us into the light. 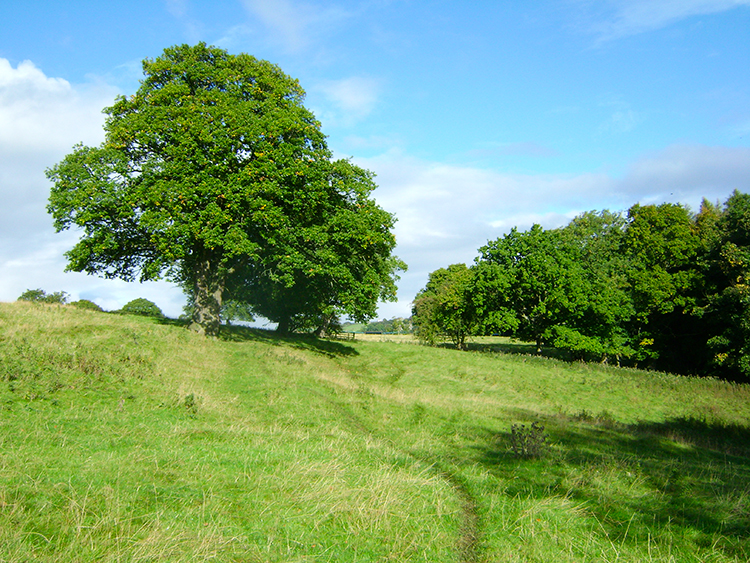 Crossing fields near Round Howe 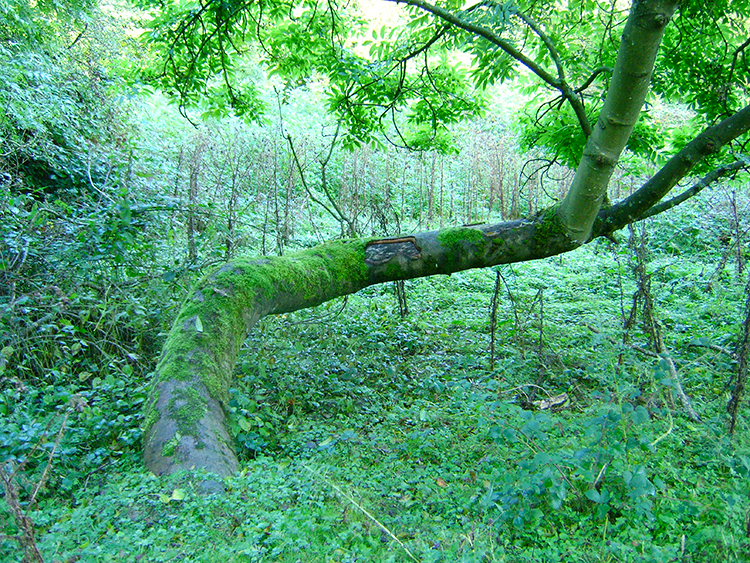 Distorted tree in Round Howe Wood

Though we had been promised a good day before we had set off from home on our day out it was warmer than we had imagined it would be. Lil stopped while crossing the first field and took off her coat and scarf. She was back in high summer for a while now. After the first longer field crossing we reached a series of narrow fields, typical medieval field boundaries still existing from when tenants managed their paddocks cum small holdings. There were about half a dozen, all around 30 metres wide. Some had gaps to get through between them, some had stiles and others had gates. There was quite a bit of interrupted walking involved. One paddock stopped Lil for quite a while. The goats were really friendly. Eventually we crossed the series of tiny fields and reached the top side of Round Howe Wood. 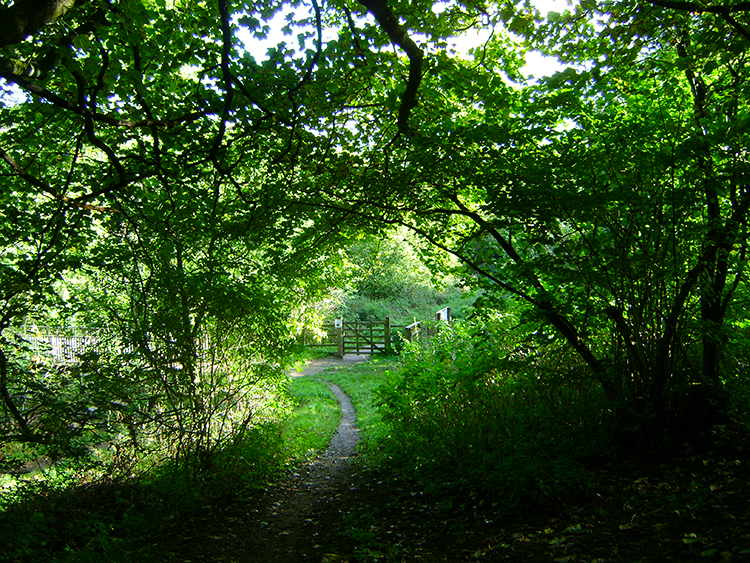 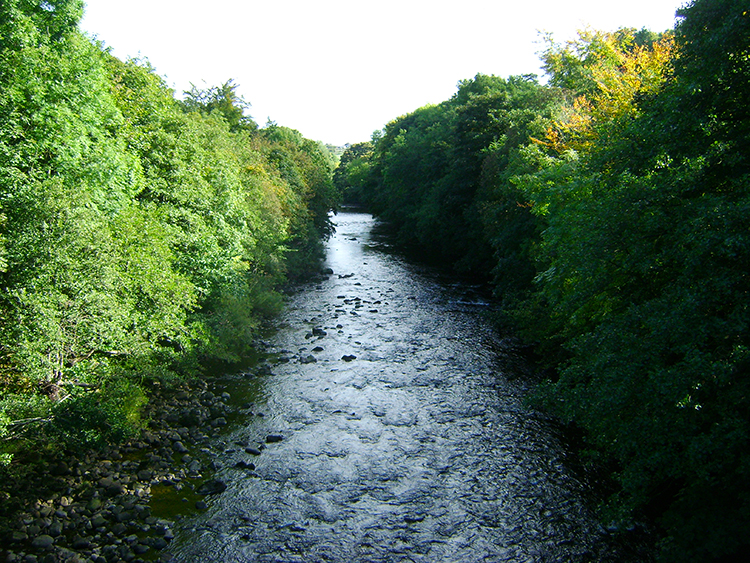 View of the Swale from Round Howe Footbridge

Soon after passing Round Howe Wood we left the meadowland behind and crossed a stile before walking down a track through Hudswell Woods which led us towards the River Swale at Round Howe Footbridge. On the way we passed a memorial bench to 'Andrew Watson: Man of the woods'. My respects. After appreciating the memorial Lil and I reached the footbridge which allowed lovely views of the River Swale flowing between a rich and thick avenue of trees. A sign told us that Kingfishers were often seen here. I imagined they would be, the environment looked ideal for them to prosper. We didn't see one though, we were not long on the bridge and soon back on our walk. 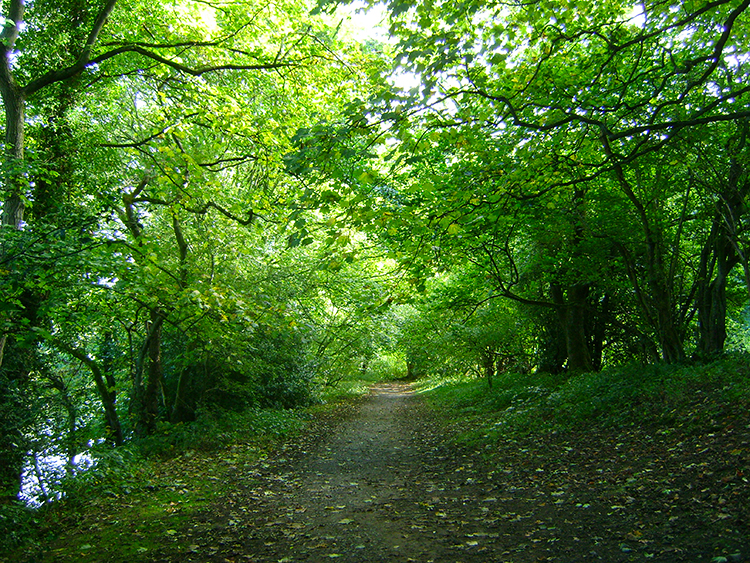 On the riverside trail 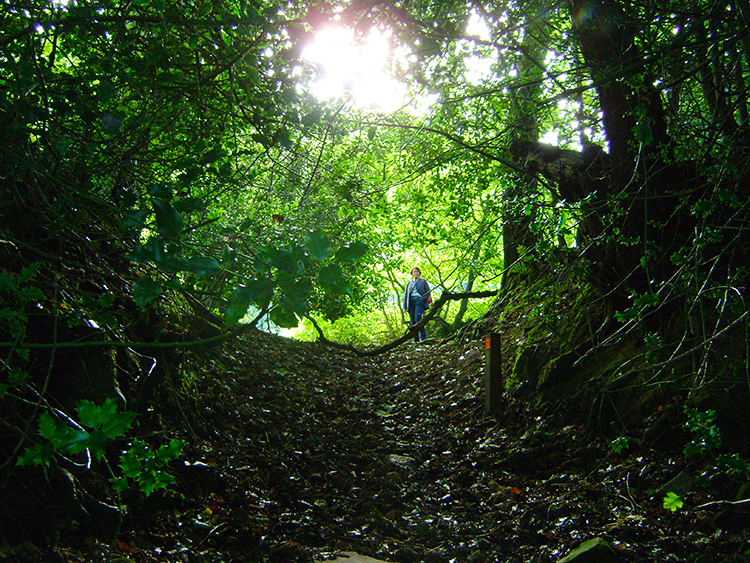 Holloway to the river

The next phase of walking was on a lovely canopied woodland trail with the River Swale flowing by parallel to the path. It was delightful strolling along the path with my wife, especially as she was enjoying her walk as much as I was enjoying mine. Part way along the trail a clearing in the thick riverside cover akin to a Holloway allowed me to scuttle down to the riverbank. I beckoned Lil with "Come on, its fun". She was not tempted though, instead keeping an eye on my antics from the path. With no latitude to explore further from the edge of the river, I soon scuttled back. 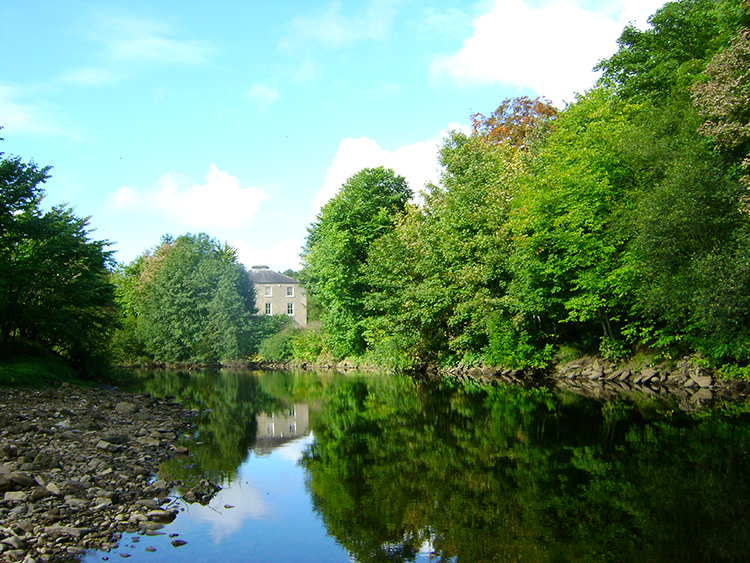 A house with a grand view 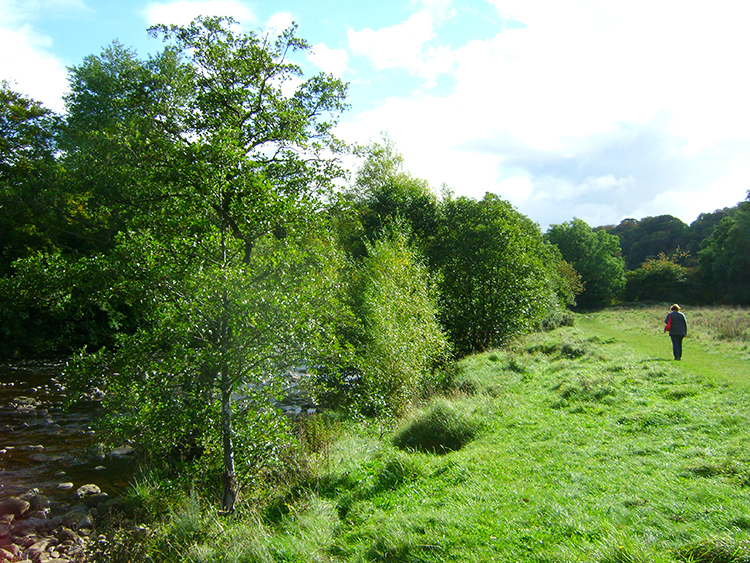 A lovely clearing beside the River Swale

Beyond the low side of Round Howe which incidentally is a rounded hump, a small bowled hill covered in trees and enigmatically fenced off, our leafy riverside trail opened out into a gorgeous clearing. In the clearing the river sweeps around a slight bend and at a point it is so calmed. On the far bank a house looks out over the river. What a grand view it has. A pebbled shore by the river allows the adventurous to put their feet in the water. Of course I did so. Regarding the clearing, I read that since 2013 the National Trust has been working to increase the number and types of wildflowers to benefit insects, bumblebees, moths, and the enjoyment of our visitors in its meadowland It shows, it is a beautiful and calm place. Lil and I met other walkers enjoying themselves while we dallied by the meadow. 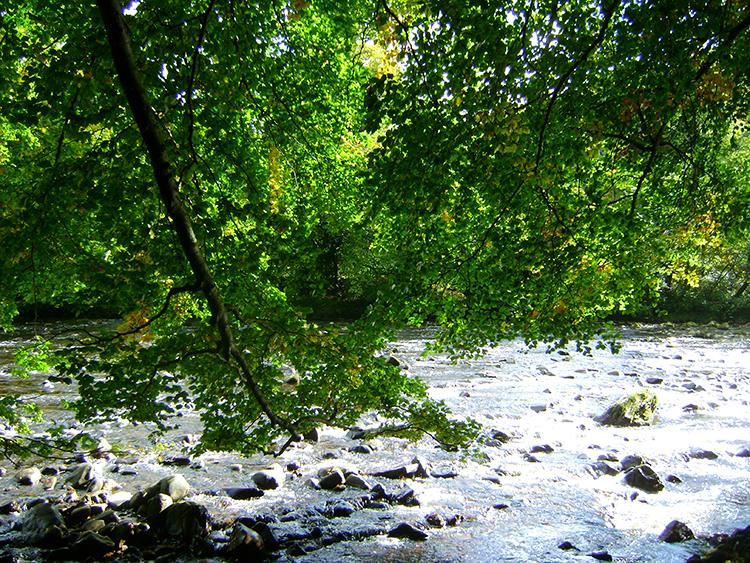 Rapids in the River Swale 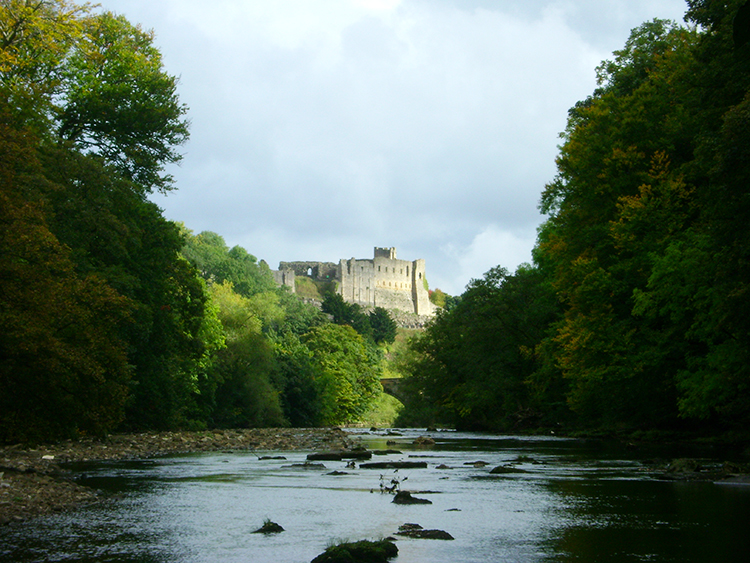 From the clearing the next part of the walk is what I shall call the exciting phase. However, it is as exciting as you want to make it. The path we followed from the clearing led us through a gate and onto a rocky riverside path. And I mean rocky, for at times the path was practically rocks set in the river. Just like stepping stones. There was an alternative route just higher to avoid the riverside altogether but where was the fun in that? Even Lil who is usually erring on the cautious was keen to enjoy the adventure of the riverside trail. On a couple of times the path disappeared completely, the river having taken it during a flood. In a flood ours was not the path to take. In conditions such as we enjoyed we would not take any other. I even stepped out into the river to take the picture of Richmond Castle which is shown here. Standing on the rocks kept my feet dry. 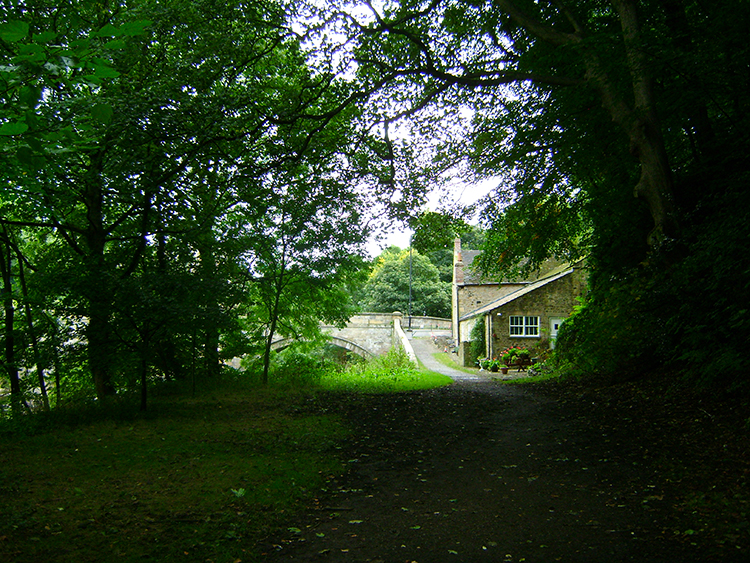 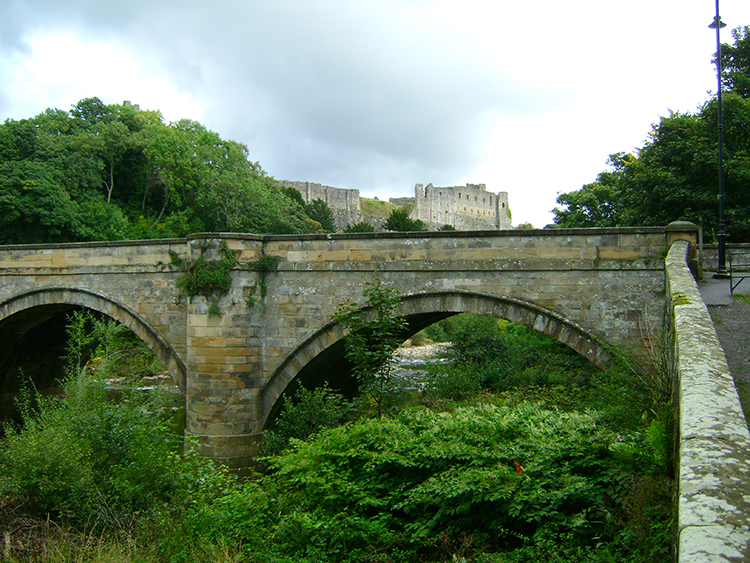 Soon our fun was over and we clambered up the bank from our exciting path to the safe one through Low Wood. Not long after rejoining the main path we left Low Wood and emerged into light at the Green Bridge. After one final look up to the castle from the bridge we climbed up into town by way of Bridge Street, Cornforth Hill and Castle Hill. Lil could not resist calling in the quaint shops on the way to the finish. She said "This is the best way to end a great walk".