Summary: A walk of two halves, the first part on the walk along the valley floor of Swaledale and following the River Swale upstream from Reeth a mile and a half before climbing south to Maiden Castle hill fort on the north flank of Harkerside Moor. The high ground is then the focus for the next couple of hours while visits to old mine workings and the highest point of the moor at High Harker Hill is attained before returning the the valley by way of Grinton Lodge. 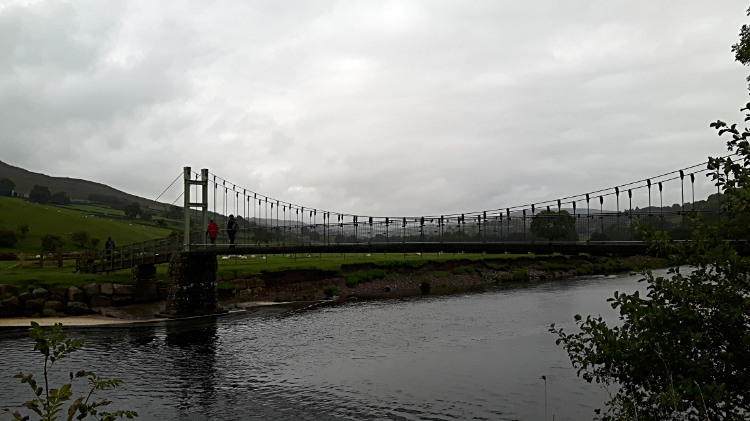 The Swing Bridge at Reeth, opened 2002 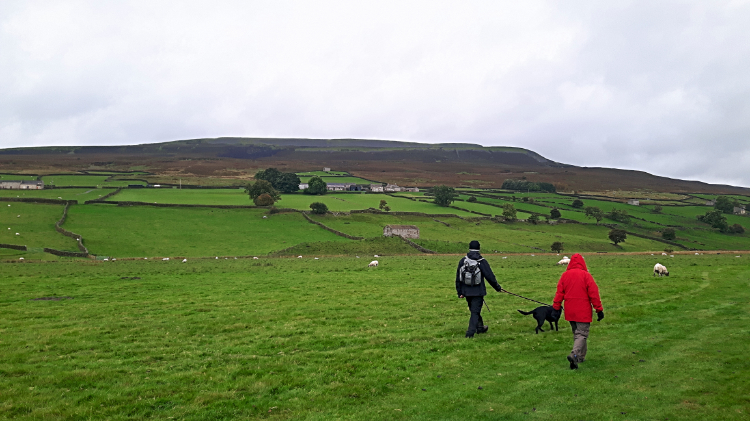 I was on a five day break in Swaledale with Dave, Steve and Jan during October 2016, this walk being on the last day. The other members of our group wanted an easier day, staying low in the region of Swaledale, after a forecast of gloom, low cloud and possible rainfall. I itched to get on the higher ground though. So we compromised, walking together along the river for a long mile before I would break south and while they would continue upstream to Scabba Wath Bridge, cross it, and return to Reeth by way of paths on the other side of the river. So from the start we all walked down Back Lane to the fields and then on the path down to the river crossing via the swing footbridge. The original swing bridge at Reeth built in 1920 was demolished by an uprooted tree in 2000. So we will have crossed it in the 1990's but I can't remember. The replica bridge, opened in 2002, has been crossed by us all a few times since. Once across the bridge we walked along together, chatting happily. I looked left and up to the hills I had opted for and said to the group "It looks okay up there. Sure you lot don't want to come". Steve replied "Not likely. Off you go when you need to. We're happy staying down here". 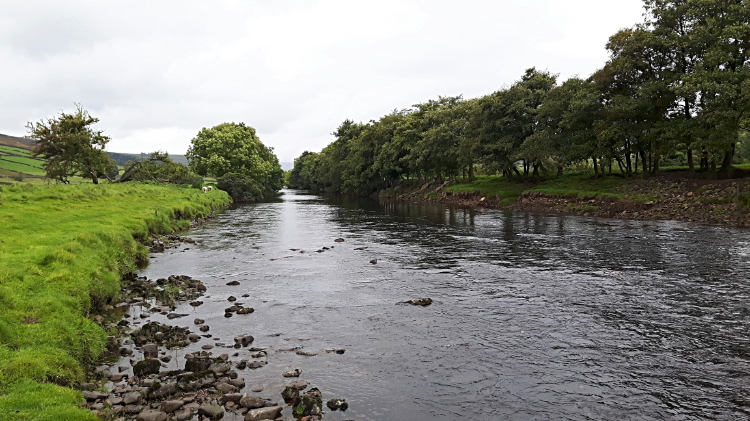 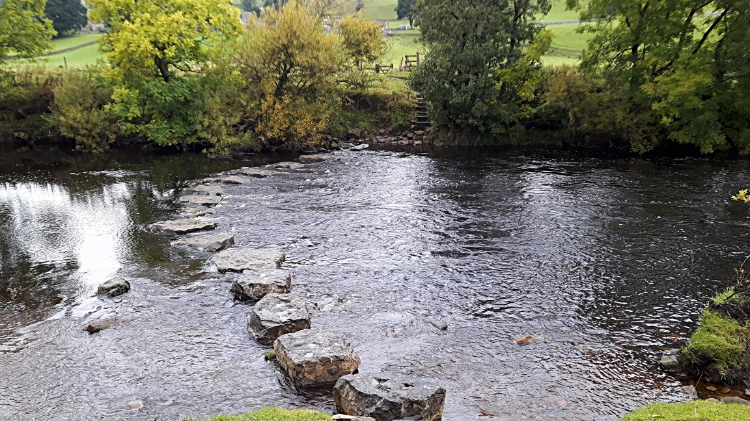 It was a delightful walk following the river along the south bank from Reeth towards Scabba Wath Bridge. I had not walked this stretch before, the river flowing along a pretty avenue, tree lined and walled from high flows on the north bank for a while and open to flood the fields we were walking across on the south bank. We then came to a raised tree lined avenue on a purposely made cobbled path standing a couple of feet or so above the natural water level. Cobbles gave way to hard packed soil path through a small copse. All was very nice. Then we came to the stepping stones leading over to the path heading due north to Healaugh. I was tempted to make the crossing but the crescent shaped stepping stones were wet throughout and that is something I did not want to be. 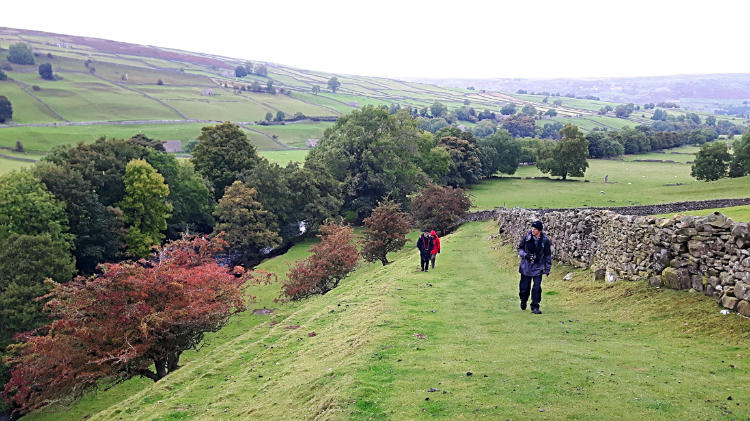 Climbing the bank to Stubbin Farm 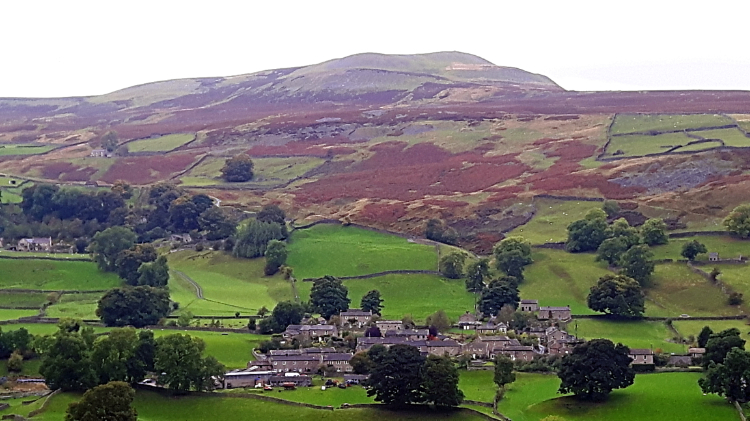 Immediately after passing the stepping stones the path climbed from the river by way of a bank leading to the intersection of paths where me and my fellow walkers parted company. Dave, Steve and Jan continued along the line of the river to Scabba Wath Bridge while I turned left to begin the climb to Harkerside Moor, first by following a farm track to Stubbin Farm. I walked through the farm yard and from there I followed the designated path leading first across a pasture field and second across a scrub field to reach High Lane which links Low Whita to Grinton. By this time I had climbed sixty metres since leaving my pals by the river and in doing so I had been rewarded with lovely views across the valley to the pretty village of Healaugh, framed by shapely Calver Hill in the background. I recalled the time when I climbed Calver Hill and walked through Healaugh during a walk of neighbouring Arkengarthdale a few years earlier. Then Curlews had paid me quite a bit of attention as I had crossed the hill in nesting season. Note, I did not bother them. I never do. And today there would be no chance anyway, the Curlews would all be off the moor and down on holiday by the coast at this time of year. 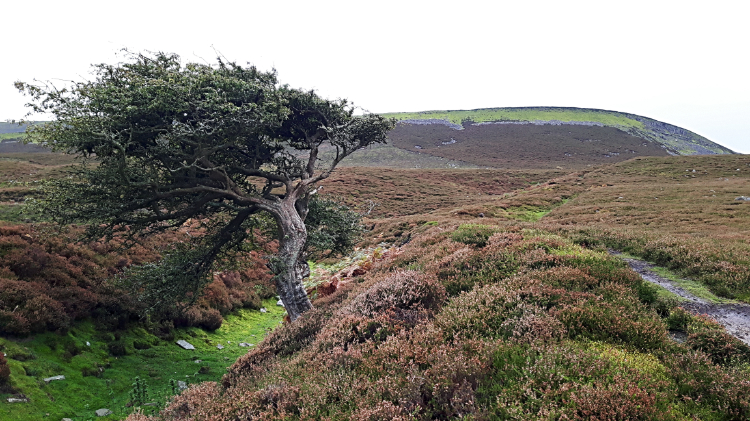 Hawthorn in the sunken ditch of Maiden Castle 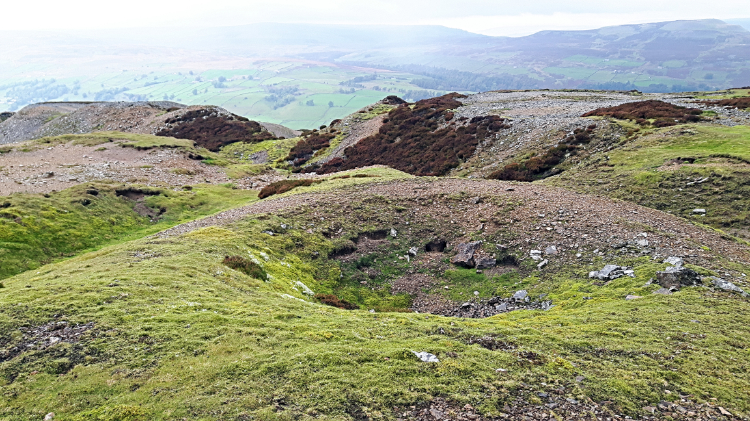 Spoil heaps of the Harker Lead Mine

I turned left, steadily climbing along the road for about 100 yards to find a waypost signed footpath on my right an aiming up the north facing slope of Harkerside Moor. A solitary hawthorn bush served as a target to aim for. On reaching the hawthorn I discovered it was growing in the sunken ditch of Maiden Castle which had served the tree as a sapling nursery. Had it been exposed to the elements outside of the ditch protection it may well have perished so what had been dug in ancient times as an outer feature of the hill fort had done good for nature, even to this day. Despite its name, Maiden Castle has no battlements or turrets typical of Norman architecture or thereafter. This castle is much older, built before use of mortar on stone and thus only massive earthworks that once protected this Iron Age fort survive. In this remote location it is one of the best preserved in Yorkshire, and well worth exploring. Which is exactly what I did. The extent of the earth works and inner depressions were impressive. However, and unusually so, Maiden Castle hill fort dies not sit on top of the moor, but on an elevation of a little over 300 metres, still 150 metres from the top. Here though it has a great view of Swaledale so it could see any approach from the valley east or west. But any raid coming from the south would be a complete surprise and swamp it. Surely this fort was social and not defensive. From the fort the path led east to a small stone cairn and on to a junction of paths in the midst of turmoil. I had reached the expanse of long term mining activity up here. There were spoil heaps everywhere and drystone walls going nowhere set in some of the spoil banks. Maybe miners shelters once stood near these decaying walls? No evidence of them now though, just the lines of aligned stones. I some of the more sheltered hollows between the spoil heaps were tunnels made by animals. Probably rabbits though I never saw any. 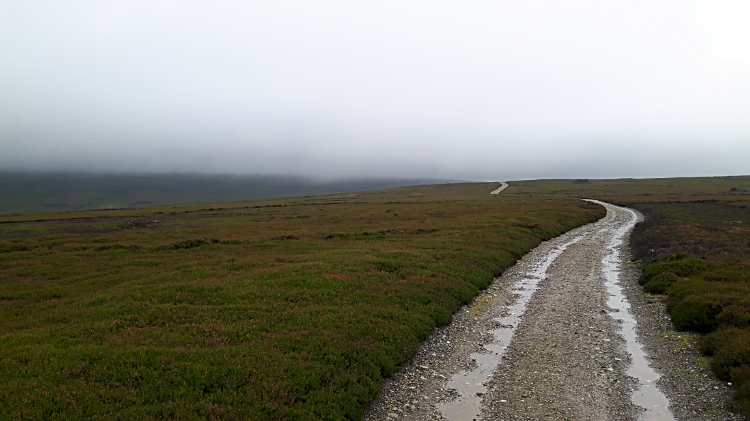 In the murk of Harkerside Moor 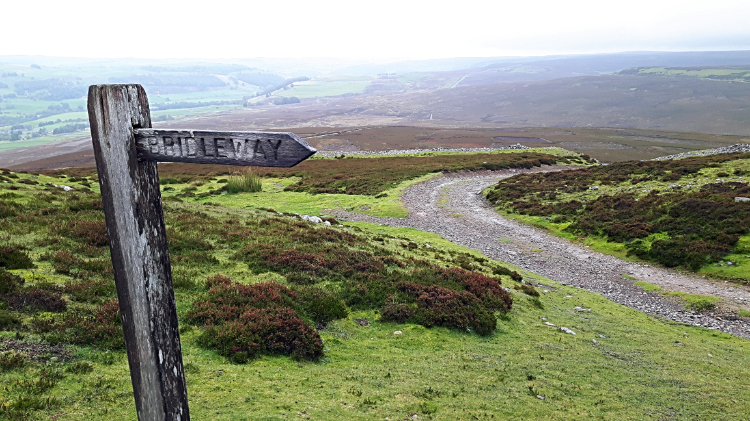 The way down to the light

While I was up here I simply had to climb to the very top of Harkerside Moor at the 466 metre high point of High Harker Hill. As soon as I had set off from the site of the lead mines to reach it I knew I should not have bothered but I was not for giving up. So stubbornly I headed into the thick of the cloud hovering at around the 350 metre height level over this part of the Yorkshire Dales this day. I could see nothing very far in front of me at all. On the very top the area was levelled and stone strewn everywhere. Exploring the east side of the summit I found big stone piles, set six foot high and the map showed earthworks here too. Perhaps there was a top fort after all and that would make sense. Maiden Castle Hill fort will have been a more pleasant sheltered settlement in that case and safer in the knowledge they had sentinel protection up top. Of course that's it. So I left the top hill fort in the murk, heading eastwards across the high moor to Low Harker Hill and on to Harker Mires. It was very peaceful, just me and the eeriness of the gloomy moor. I was thoroughly at peace with myself crossing the upland, seemingly all alone. But then, a shock as the peace was shattered. First I heard a trundle, then a louder roar of engines. Then out of the gloom they came. The invaders. Whoosh, the convoy went past at some speed. I counted eight tracked army all terrain vehicles in close attendance to each other. I had to step off the path as they roared by. In the back of the army vehicles were soldiers in full battle gear and with rifles at the ready, all looking out from each vehicle. Had I been the enemy I would have been history. Obliterated. In the event the soldiers looked as surprised to see me as I had to see them. In a flash they were gone as quickly as they had arrived. The noise soon died down to a hum and then to nothing. It was surreal. 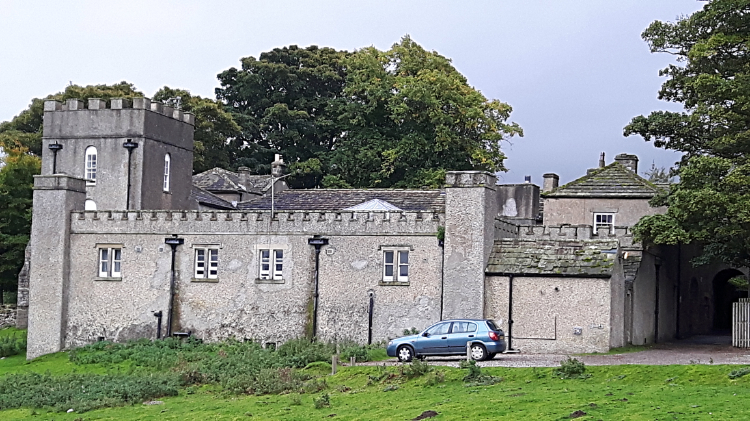 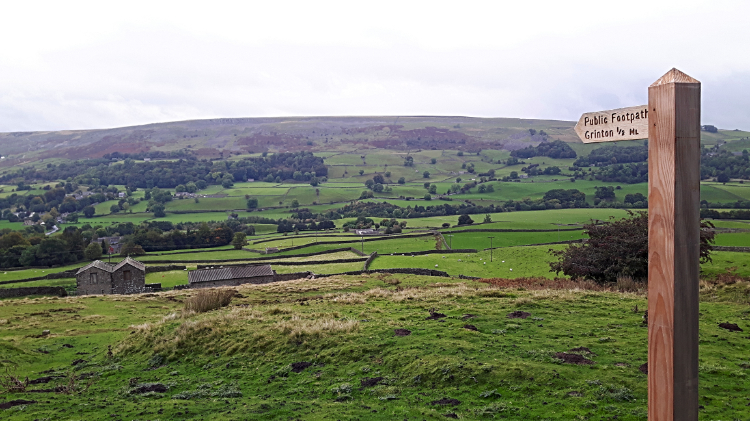 View from Grinton Lodge to Reeth

The track the soldiers had passed along and which I remained on led unerringly along the shelf of the moor for more than a mile. Then it began to descend. At Harker Mires I had dropped 100 metres and sufficiently out of cloud to reacquaint my eyes with Swaledale. Reeth appeared away to the left while straight ahead of me the give away high tower of the former shooting lodge which is now Grinton Lodge Youth Hostel gave me a line of my next course. I had choices of paths to make it to the tower, choosing a lower path to the mysterious place name of John Moss's Chair. There is no clue as to why the point is so named on the map. Not a clue on the ground either as I passed it, reaching Grinton Lodge soon after. From the lodge I took a north-west course down from the moor and across in-moor fields leading back to Reeth Swing Bridge. Back over the bridge I went and then back along Back Lane into Reeth. Job done. despite the gloomy forecasts from the TV weather buffs in the morning it did not rain. Though low hanging cloud stopped me enjoying views from the very top of Harkerside Moor I was compensated by interesting discoveries and by making reasonable assumptions of iron age life on the high hills of Swaledale. All in all, a lovely walk with a nice beginning walking by the river in the valley and the thrill of Harkerside Moor afterwards. So glad I did it.