Summary: This walk is easy except for the climb to the trig point and beacon on Warton Crag which requires some balance on a short stretch of easy scrambling. The remainder of the walk is generally easy on good grass, through woodland on a mix of paths and tracks and with one stretch of road walking which is generally very quite of traffic. The views from Warton Crag to the village of Warton and south to Morecambe and along the Lancashire coastline are worth all the effort. 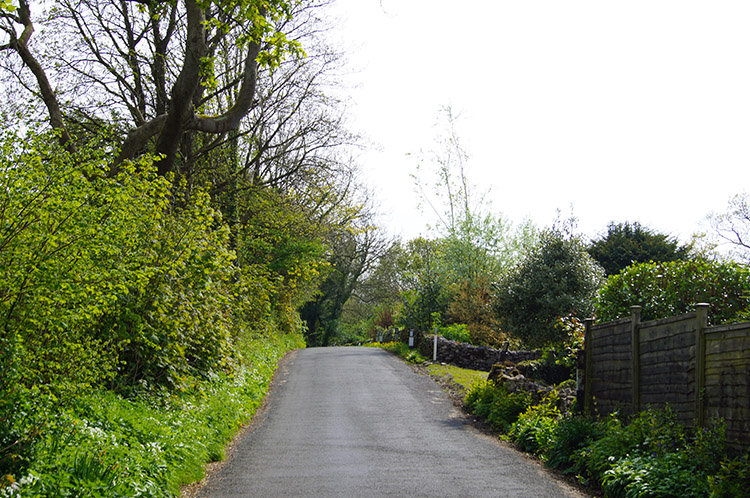 Following the road from Quaker's Stang 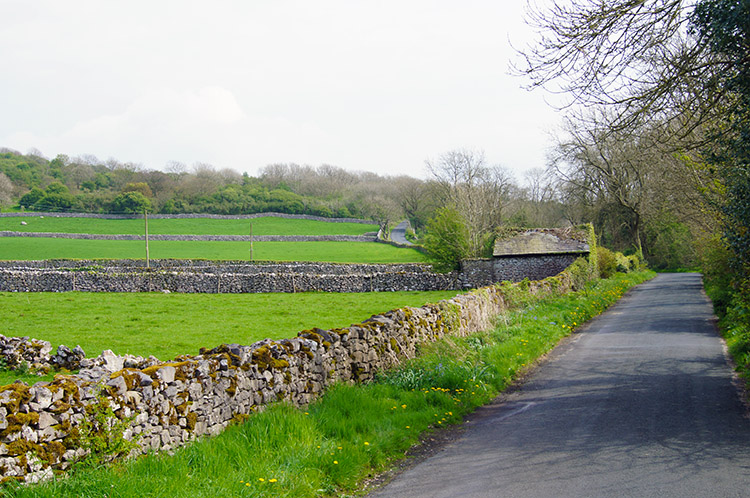 The least attractive part of this circular walk is done first, a road walk from leaving the car park at Quaker's Stang all the way to Warton Crag. There is one and a half miles of road between the car park and the crag and though road walking is not the most desirable at least this road walk was quiet. There was precious little traffic before I took the left hand fork at Crag Foot to follow the uphill road to Warton Crag and after the junction just two cars past me in the twenty minutes it took me to walk up the road. That allowed me to listen to the birds chirruping in the hedgerows and roadside trees along the route. 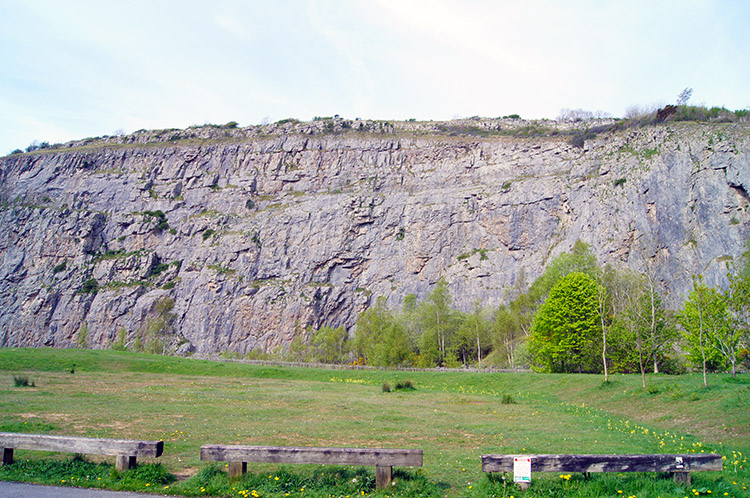 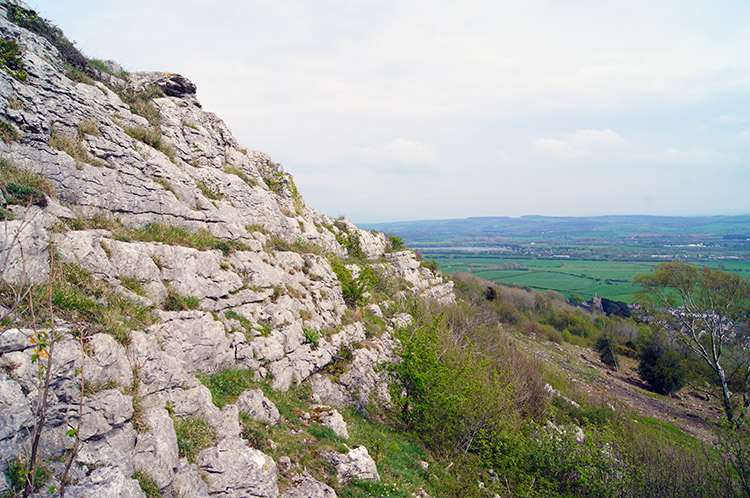 After half an hour of road walking and listening to birds I reached Warton Crag. As soon as I turned from the road into the car parking area I could see the huge vertical cliff which was obviously once a quarry. Mans activity may have shaped this aspect of Warton Crag but it sill looked striking beautiful and the ominous presence that a vast vertical cliff evokes captured my attention. It has apparently reaped benefits for local wildlife too. Peregrine falcons use the cliff to manoeuvre prey. If fact the area around the cliff and Warton Crag is now managed by the local wildlife trust, something which I support being a member of my local Yorkshire Branch. After taking on the enormity of the cut face of the quarried limestone I walked to the right hand side of the cliff and followed a path up through woodland. The path was easy for just a few steps until I took the left hand branch at a fork of paths which led to the beginning of my steep ascent. After some hauling and puffing and passing over a stile I eventually reached the top of the cliff which I walked along at a safe distance from the edge for a few yards before hauling, heaving and puffing my way up again to reach the exposed natural limestone face of Beacon Breast. 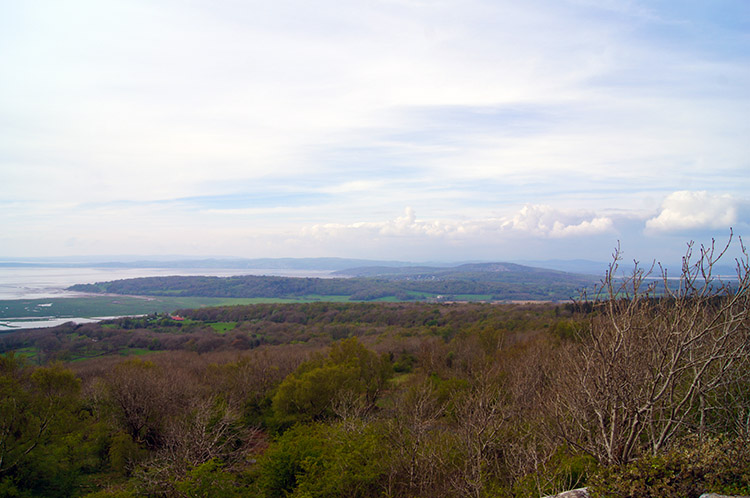 Arnside and Silverdale as seen from Warton Crag 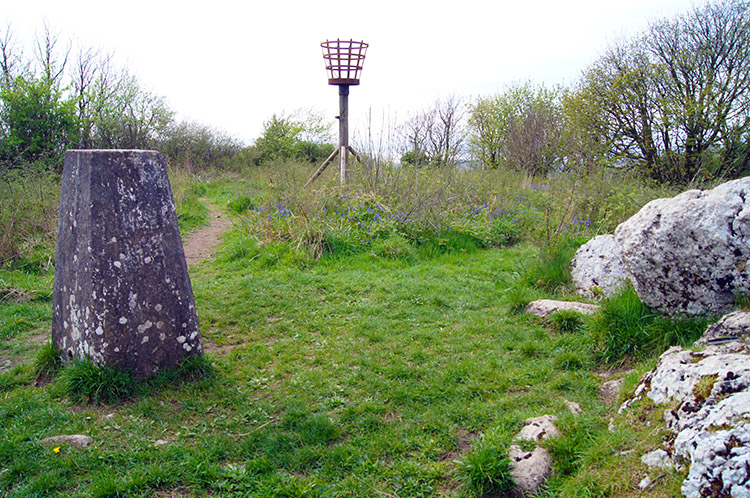 As I climbed from Beacon Breast towards the top of Warton Crag which was done in stages of fairly even ground and almost stair like steps up the limestone blocks I looked out occasionally. Views were opening out for me. To the south I could see to Warton, Carnforth, Lancaster and Morecambe on the Lancashire coastline. I could clearly see the towering buildings of Heysham Nuclear Power Station too. I turned from it and looked west and north over the Arnside and Silverdale Peninsula. In fact I could see the entire expanse of Morecambe Bay. I turned from the view, headed on up further and soon reached the trig point and signal beacon on the summit. Apparently a beacon has been on this site since the Spanish Armada attempted an invasion of England in 1588. I saw no ships on this day though. 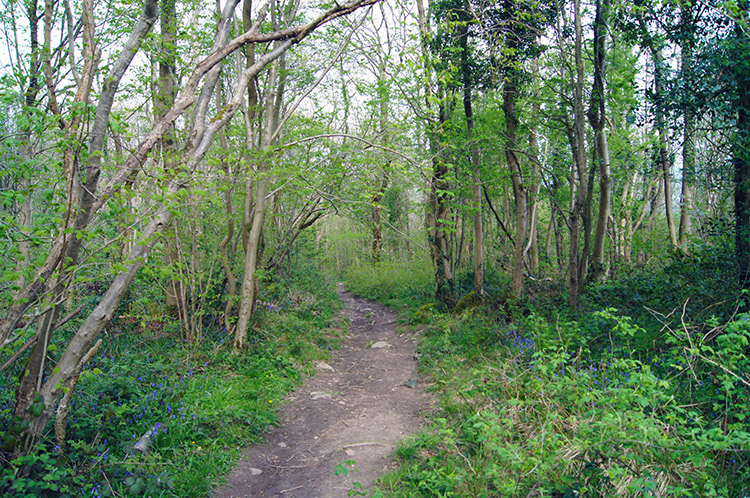 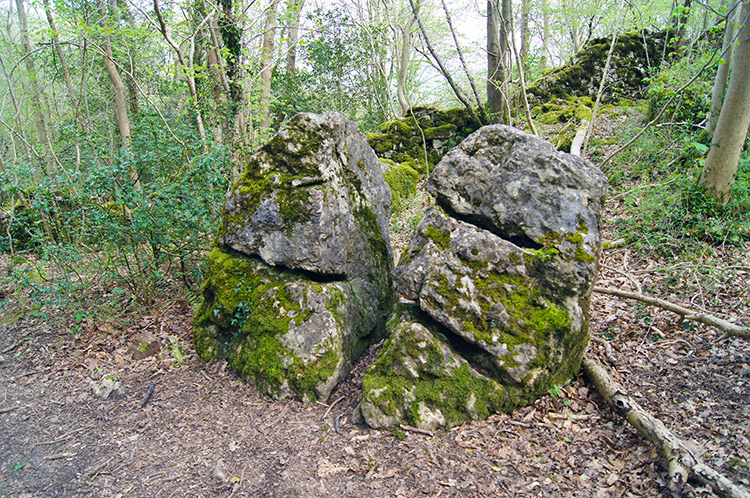 Marked boulders beside the woodland path

I took lunch near the trig point on Warton Crag, admiring the blanket of Bluebells in the neighbouring woodland as I rested. Then after lunch I headed on a path into Strickland Wood and absolutely enjoyed myself gambolling along the paths with exquisite views of trees showing light green spring leaf growth which contrasted with the Bluebells perfectly. Being on a slight downhill gradient as I did so it was perfect. The woodland was a real pleasure to be in on such a lovely day. 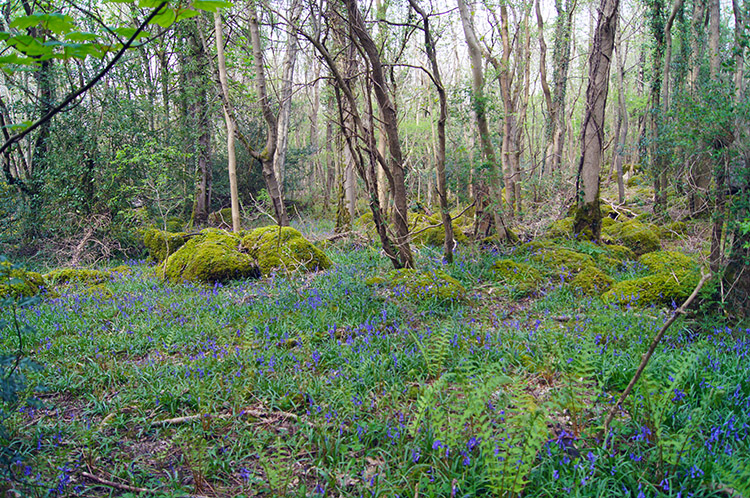 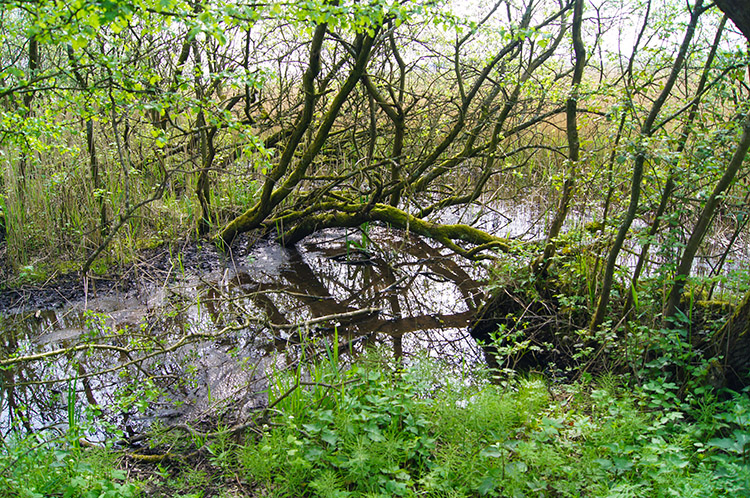 I continued through the woodland of Strickland Wood and then through more woodland past two small rounded hills, Three Brothers and The Belt respectively. After The Belt my course north off warton Crag became a easterly heading which led me out of the woods by crossing the road linking Warton and Yealand Conyers. After the road crossing two fields and a woodland path led me skirt the village of Yealand Conyers before I tracked from north to west and then followed the path past Leighton Hall Home Farm. After walking closely by the impressive building I carried on walking on the road between open fields to Grisedale which led me to Leighton Moss Nature Reserve.

(Note: The route I took through Stickland Wood and Brothers Wood has been closed since July 2018. The alternative route of bridleway and Coach Road is shown on my maps and is included in the files available to download on this page. I hereby express my thanks to Phil Robinson for pointing out these changes) 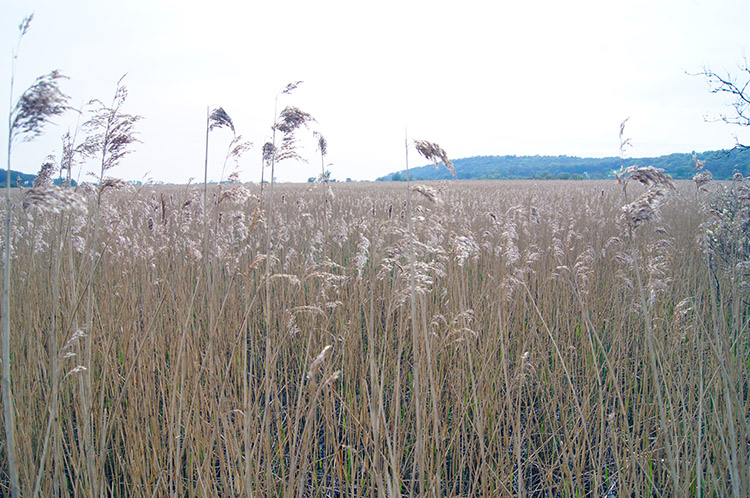 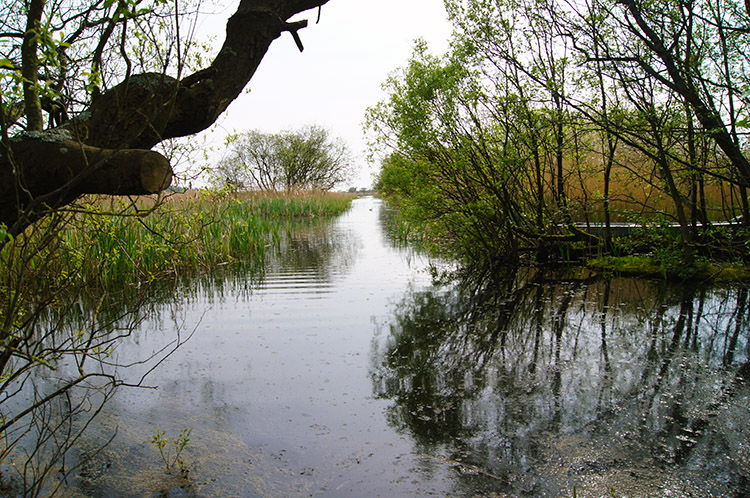 A haven for wildlife

It is reputed that Leighton Moss Nature Reserve contains the largest area of reed beds in north-west England, which are managed to prevent them drying out and to prevent saline intrusion from the coast. I could not argue with that, for much of my crossing of the wetland all I could see on either side of the path was reed bed, high enough to blot out the view beyond. The reedbeds provided habitats for many species of wildlife, including many birds and even red deer. I am sure I saw one. 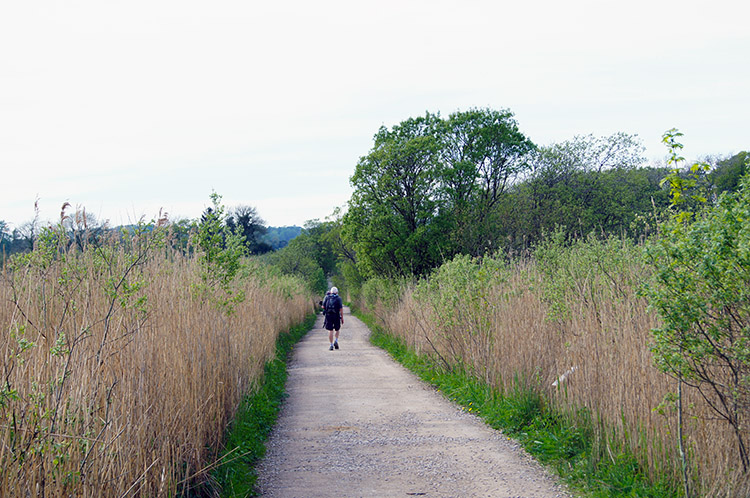 You have to stick to the path here 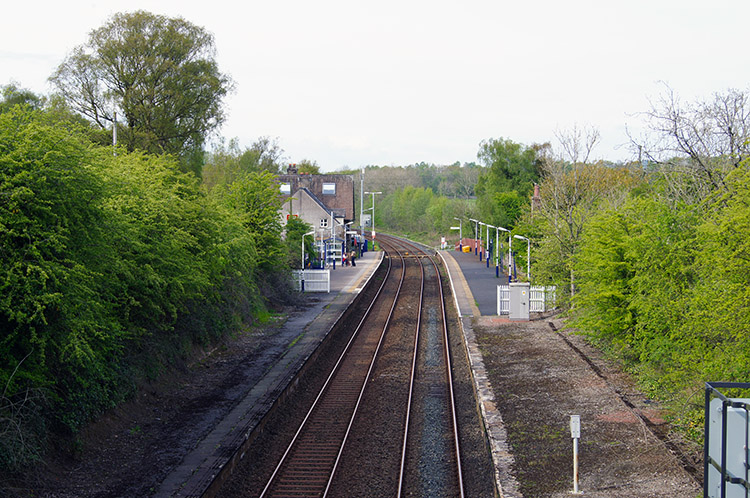 There is no chance of leaving the direct line path crossing Leighton Moss Nature Reserve, there is water everywhere either side of the path. Birdwatchers who are drawn to this place use the hides which are situated about halfway along the path. There were private hides and public ones too so I could have taken a peek but I declined, still having some walking to do. I was satisfied to listen to the noises coming from the reedbeds and open water all around me and imagine. After a half mile walk across the nature reserve I climbed the final few yards of the straight line path and turned left onto the Yealand Storrs to Silverdale Green Road. This led me over a bridge from where I could look in on Silverdale Railway Station. 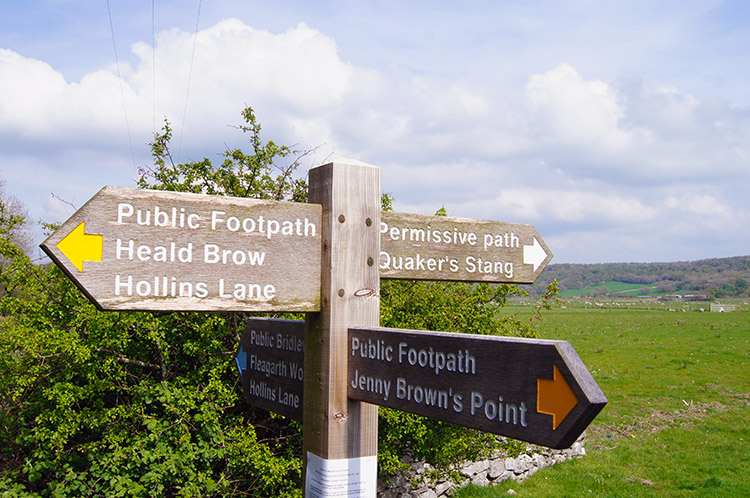 Signpost near the Heald 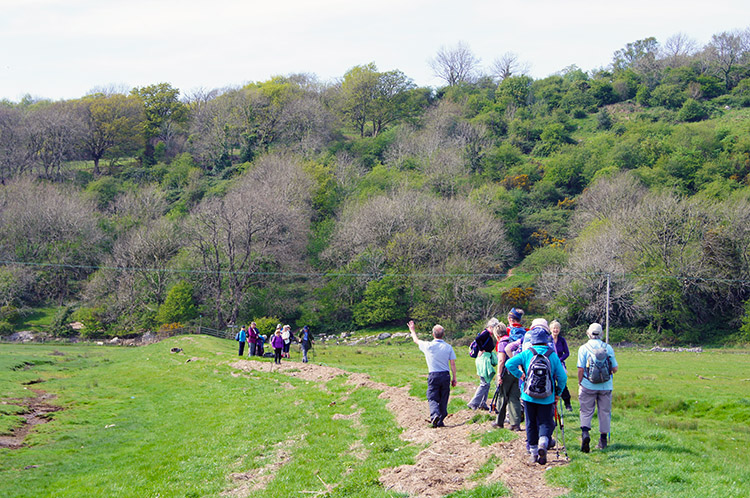 After passing over the railway I came to a road junction and took the right fork and then at two more junctions went left and left which brought me to Fleagarth Wood which I walked through, amidst yet more Bluebell carpets to skirt Heald Brow and reach the start of the raised embankment crossing of Quaker's Stang which would take me back to the car. As I crossed I ran into a gang of Ramblers, mostly elderly. All were enjoying their day out bar one who was sat on the embankment taking a rest. Some of the large group were patiently waiting for their resting colleague while others grumbled. I could clearly hear the discontented grumbles from a group of four ladies who clearly wanted to get moving. Glad I walk alone most of the time and when I do walk with others I make sure it is with friends of similar fitness. Walking is not for conflict.

To sum up - Apart from the road walking at the start of this circular the walk was wonderful and very diverse. I would not have missed Warton Crag for treasure - it was beautiful and I am led to believe full of Butterflies and Wild Flowers in summer. It was good enough in Spring. And Leighton Moss Nature Reserve was a unique experience too. A super compliment to the walk.

Note: I did this walk as part two of a longer full day walking in the the Silverdale and Warton area. Therefore this walk can be linked to the Silverdale walk to make a full day out - see the longer walk here.