A walk in Roundhay Park

Summary: This delightful walk is my exploration of Roundhay Park which includes walking to both lakes in the park and to the castle folly set within the grounds. I set off from the car park just off Princes Avenue (off Street Lane) which is convenient if planning to visit Tropical World which is across the road from Roundhay Park. From the start I first visit the smaller Upper Lake before heading through woodland to the castle. Afterwards I walk the full length of the east side of Waterloo Lake before crossing the dam footpath on thew south side of Waterloo Lake and returning to my starting point via the Lakeside cafe and the arena.

The Walk: There are two great public parks in the north of Leeds. I discovered them both when I moved to Leeds with work in the early 1980's. One is Golden Acre Park which is slightly out of urbanisation on the Otley Road and thus only accessible by car or limited public transport. The other is Roundhay Park which is found within the city boundaries and accessed by a number of bus routes. It is a very popular park and is even within walking distance for many city dwellers. Here is my recommended walk in the park if you have a couple of hours to spare. 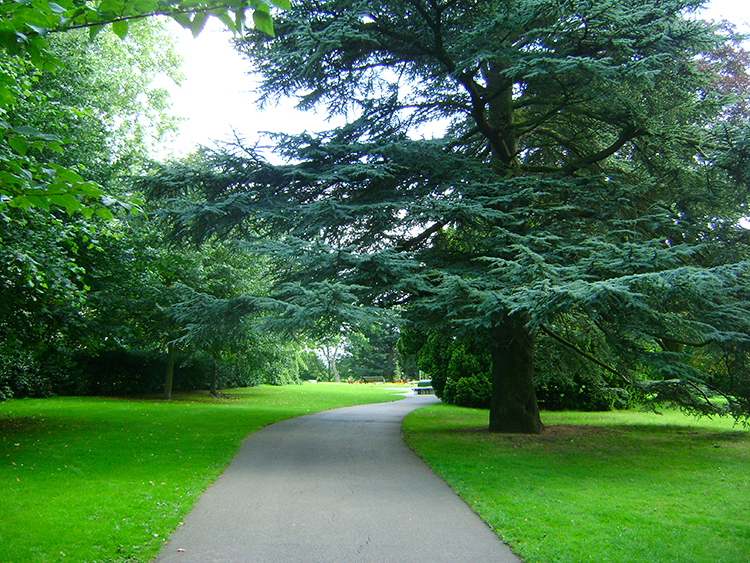 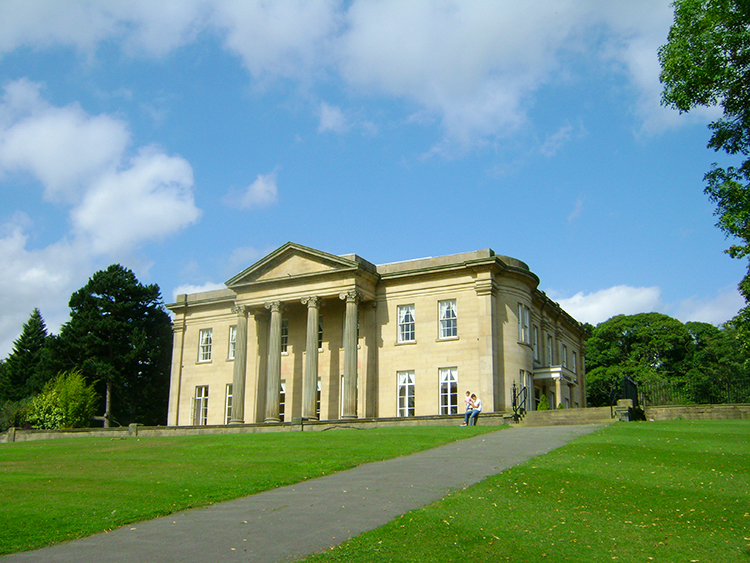 The Mansion in Roundhay Park

My walk had started at the a mile and a half away at the junction of Harrogate Road and Street Lane from where I had disembarked from the Harrogate to Leeds bus. After reviving memories of my time living near Roundhay Park in the 1980's by walking along Street Lane I passed the Roundhay Fox public house and turned into the park to tread more familiar ground. It was a perfect day, ideal for strolling around the park. I walked past some manicured lawns and on the hard path around a roundabout festooned with flower borders to approach the Mansion. The impressive building, built in Greek Revival style with a columned frontage was originally built as a home but is now a public Education and Visitor Centre. It has a cafe/ restaurant established now (summer 2016). 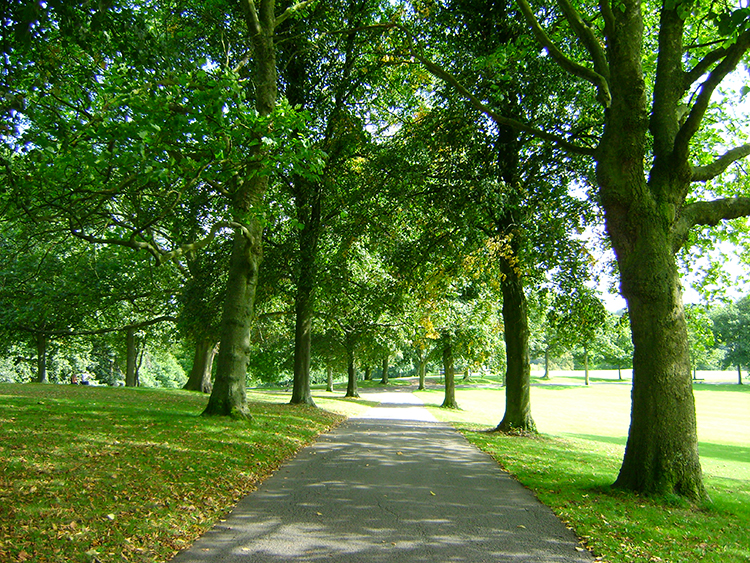 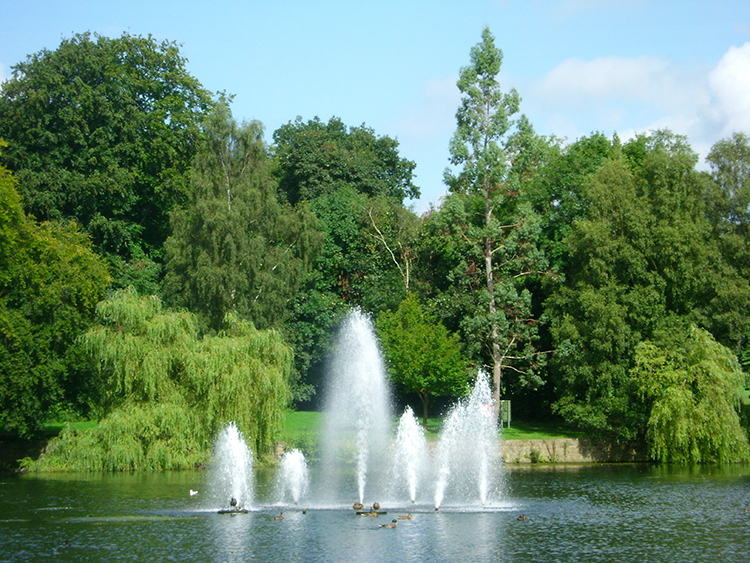 After having a wander around the Mansion and without entering the building I continued on my walk which led me along a lovely tree lined avenue to Upper Lake. The lake is in a spectacularly beautiful setting and from the direction I approached my first view stopped me in my tracks. It was a gorgeous sight and I was drawn to the centre of the lake where white water cascaded from a series of fountains. As well as the fountains Upper Lake has an island and a waterfall which feeds water on its way to Waterloo Lake. 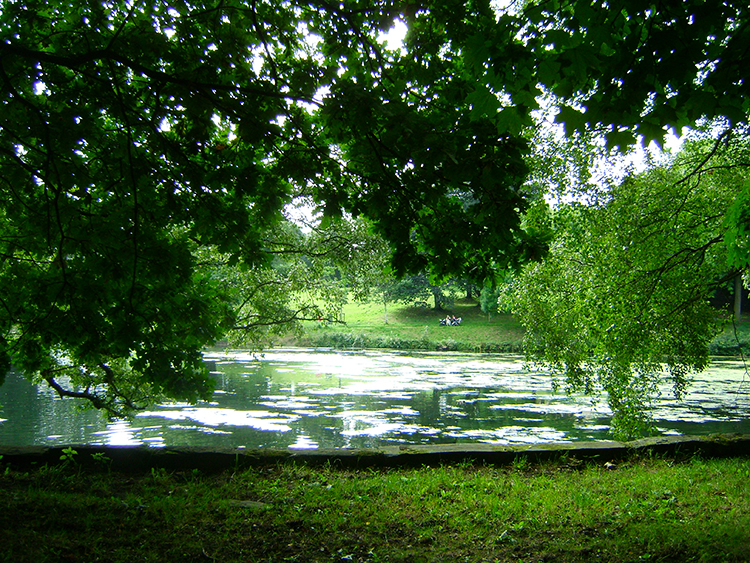 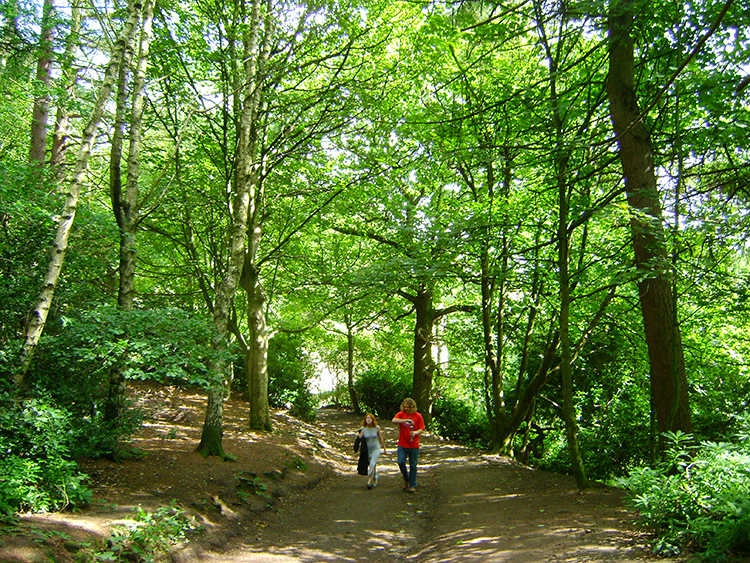 I continued my walk by circling around the west and north sides of Upper Lake, stopping again and again to enjoy the view across the water. As I watched the stirrings Ducks and Coots paddled close to the edge of the lake. I watched them as they watched me. Smaller gulls were settled further in towards the middle of the lake. They were not bothered. Beyond the lake I continued walking east and north through Roundhay Park Woods. The walk continued to be delightful and the weather remained perfect. I walked with a smile on my face. Everyone I met seemed to be smiling too. 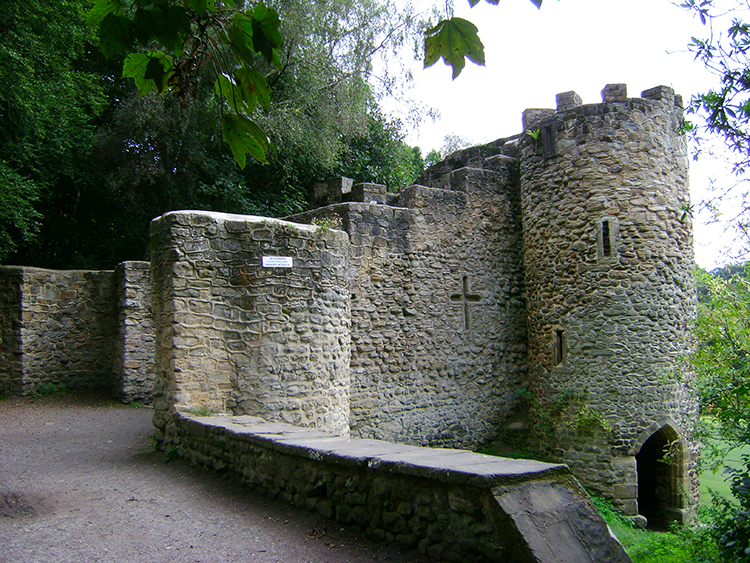 The Castle in Roundhay Park 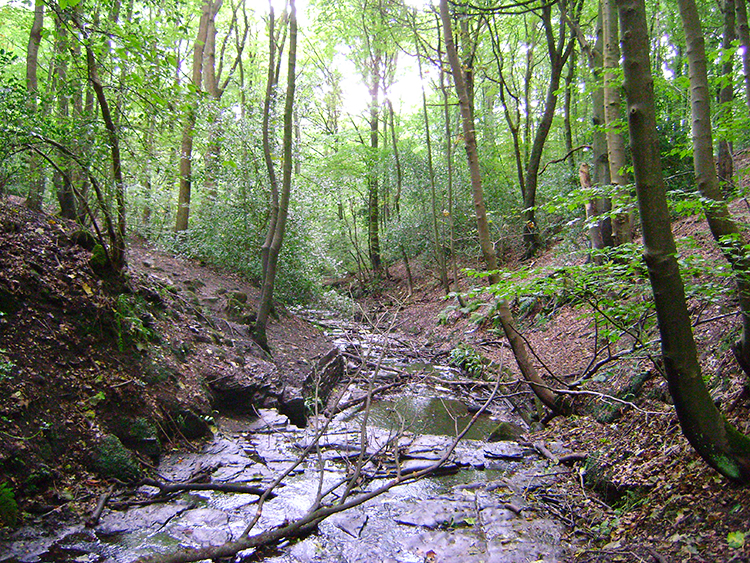 The Gorge in Roundhay Park

After a short while of walking and greeting people within the woods I came to the castle which was built in 1811 by local master builder George Nettleton for the Nicholson family, Quakers and the original inhabitants of the Mansion. Now an attraction for the people of Leeds the castle has served a number of functions in the past including a private summerhouse, a sewing room for the Nicholson girls, and for social functions such as dinners and balls. After my look around the castle I continued for a short while following Great Heads Beck upstream through the gorge. Rather than track back along the gorge to a footbridge I leapt over the beck to the east side and followed it down to where it fed into Waterloo Lake. 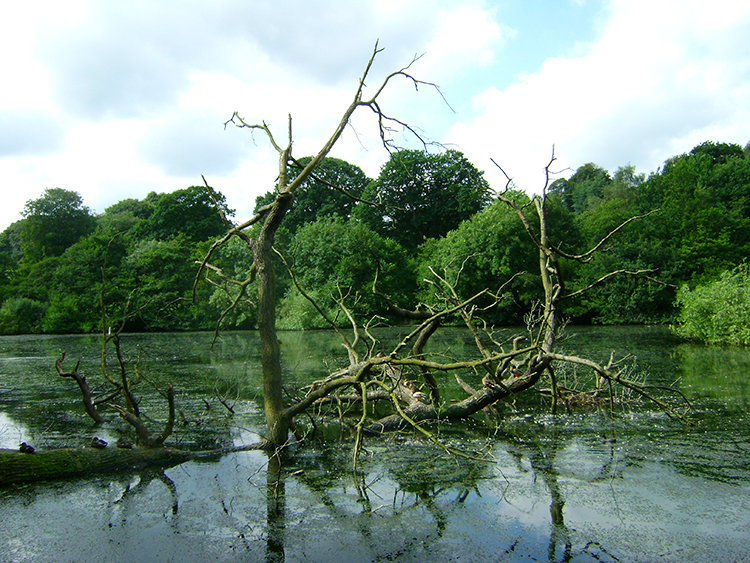 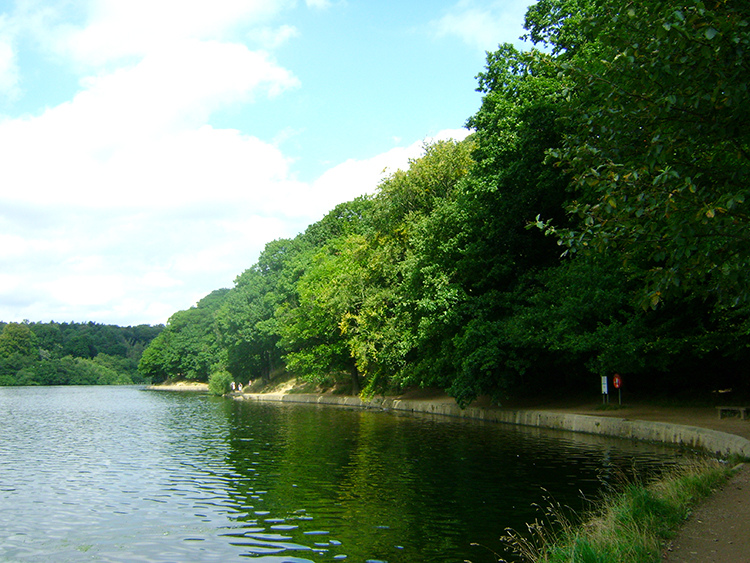 I arrived on the east side path of Waterloo Lake and surveyed a very tranquil scene. Waterloo Lake is the jewel in Roundhay Park's crown but don't be deceived by its appearance. Waterloo Lake had dark secrets. They include the tale of a sunken ship, dumped guns, unused explosives from the second world war and of monster sized Pike fearsome enough to drag ducks under the water. Whether any of these tales is true or not, imagine so as you walk around its serene shoreline. For example the sunken ship is supposed to be the Victorian pleasure steamer 'The Maid Of Athens' which used to cruise around the lake while full of poorer city living passengers, many of who could not expect to see the sea in their lifetimes. How times have changed. 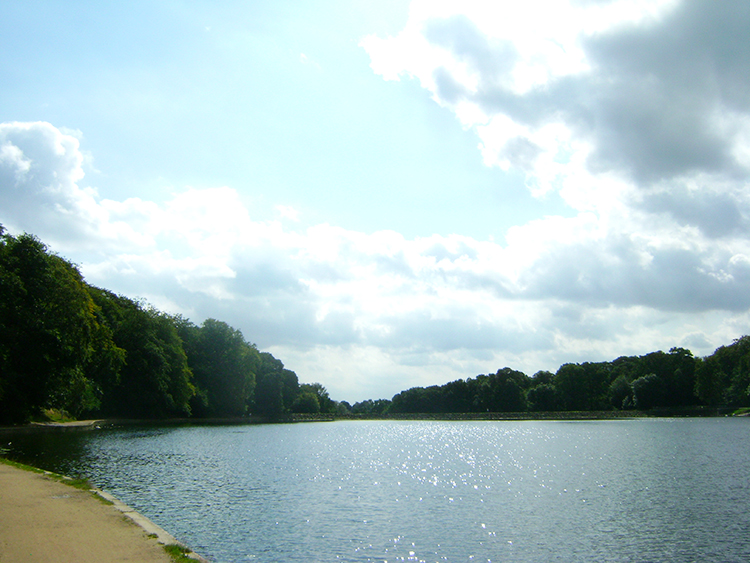 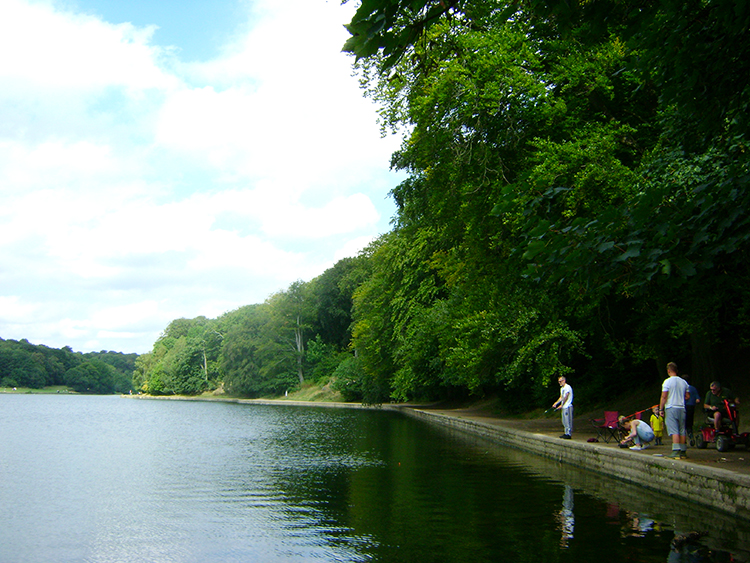 I walked along the east path from north to south, meeting people enjoying themselves by the lake at regular intervals. Their were couples of all ages, groups of walkers and family groups too. Most were strolling but not all. In the south east corner of Waterloo Lake I came to a large family group of all ages. There were three generations, if not four. The eldest males were fishing with rods and most of the children were fishing with nets. Perhaps they were looking for those monster Pike? Maybe not, but they had caught some small fish though and they were pretty pleased with their gains. Their catch was either Roach, Tench or Bream, all of which are found in the lake. As are the Pike which had eluded capture. 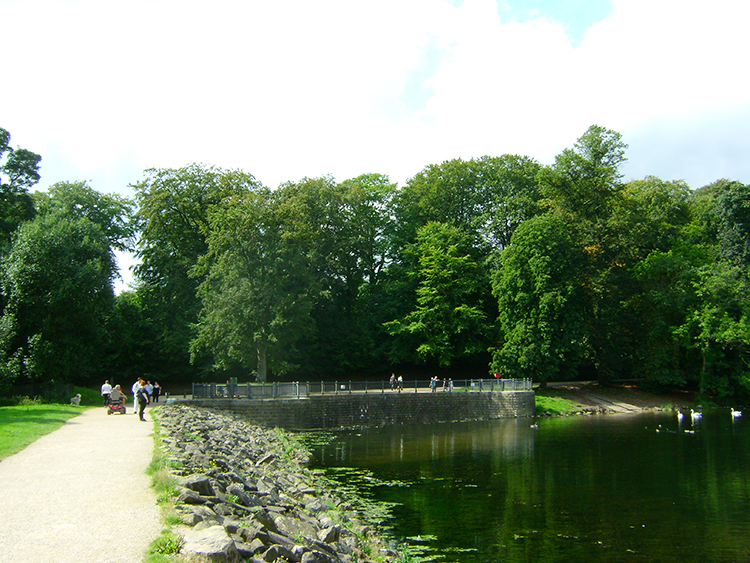 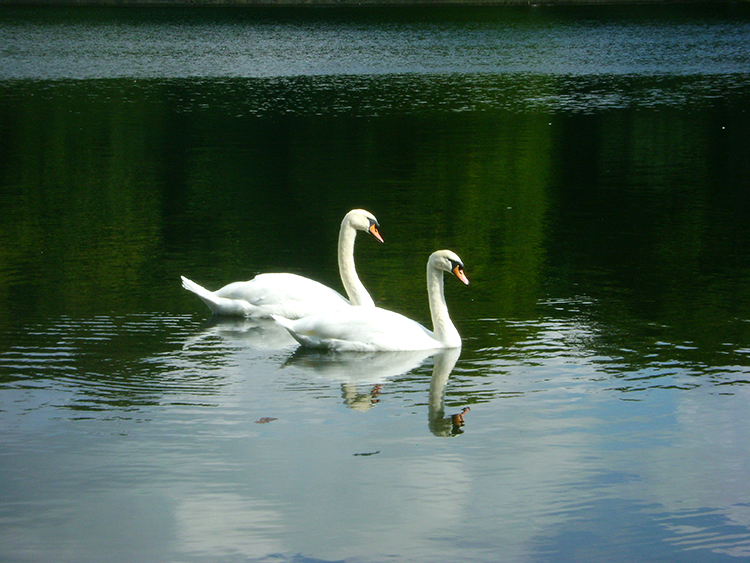 After standing near the south-east corner of Waterloo Lake for ten minutes watching the fishing and other goings on I walked across the Fall, which is the name attributed to the dam, to the west side. As I crossed I watched about half a dozen Swans who were effortlessly gliding across the tranquil waters of the lake. I was not the only one, a small group had stopped to observe the natural entertainment. Swans have a special gift, they always make people stop what they are doing to watch them. Swans make people happy and the birds seem to enjoy the attention. Two Swans in particular seemed to be giving a performance, swimming out in formation one way and then turning to return on the same line while still in perfect harmony. 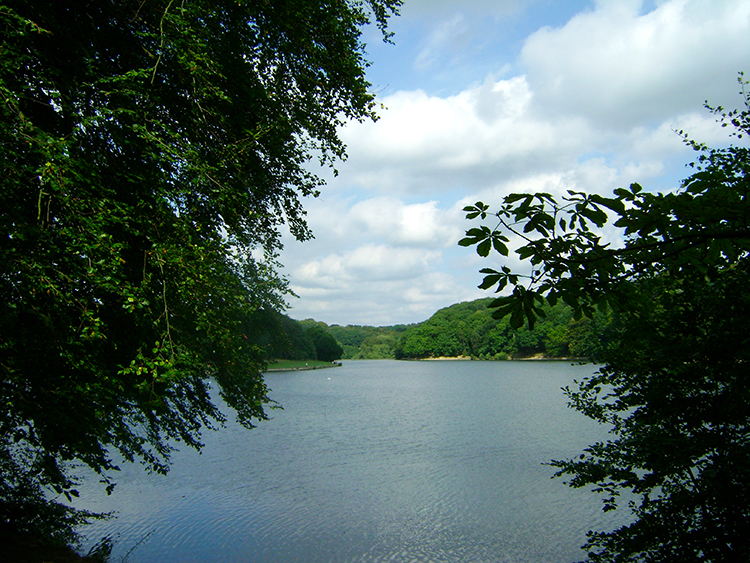 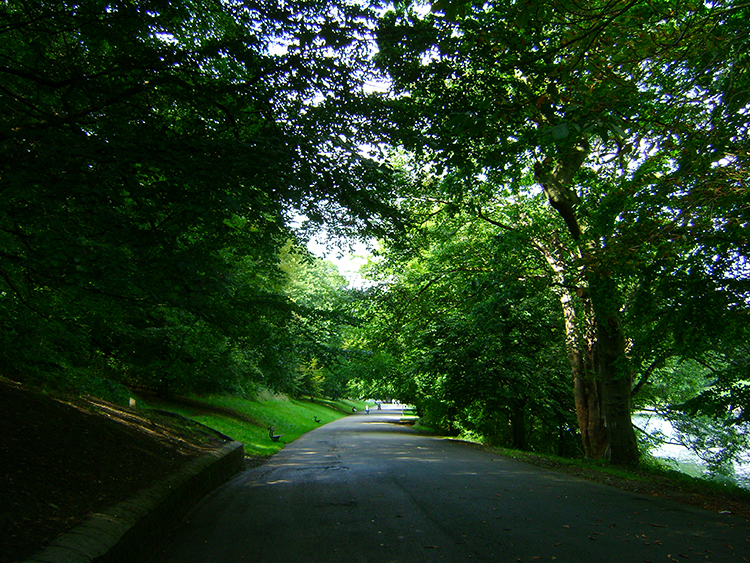 The south road in Roundhay Park

I will call this paragraph 'Memory Lane'.... I walked along the south road of Roundhay Park, the road of which I was most familiar. During my time living in Oakwood in the early 1980's I used to walk across Soldier's Field and into the park from this direction. Usually while walking with my first wife on a Saturday or Sunday we would stroll down to the waterside and then continue along to the Lakeside Cafe for a weekend treat. Yes indeed, I have good memories of this part of the park which is by far the most popular part of the park. Memories from my younger days, only around 35 years ago! 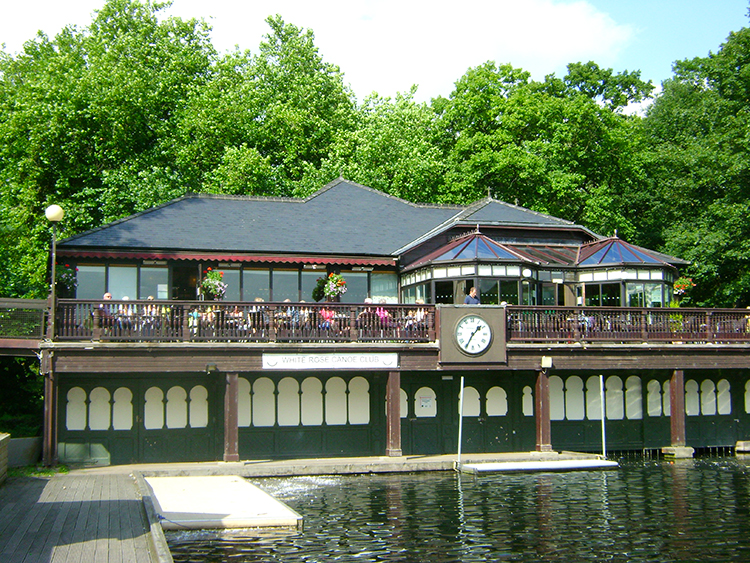 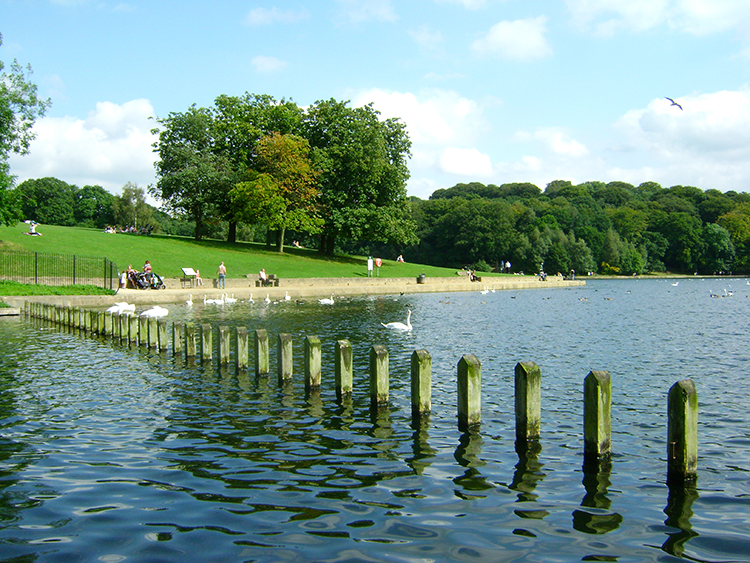 Back in the 1980's the south-west corner of Waterloo Lake was a busy place and it remains a busy place to this day. This report is of a midweek day but while around the vicinity of Lakeside Cafe it could have passed for a weekend. The cafe itself was doing good trade, as it always does. I popped in with the intention of taking a refreshment break but turned around when I saw how busy it was and how long the queue waiting to be served was. It was 1.40pm, Wednesday afternoon. So I popped outside and enjoyed the setting outside the cafe. More Swans were congregated in this area of the lake, around two dozen of them. There were around the same number of Canada Geese too, as well as Ducks and Coots. Most are along the shore side east of the cafe where people were congregated sat on benches and on the grass bank while picnicking. The birds were available, anticipating any tit bits coming their way. 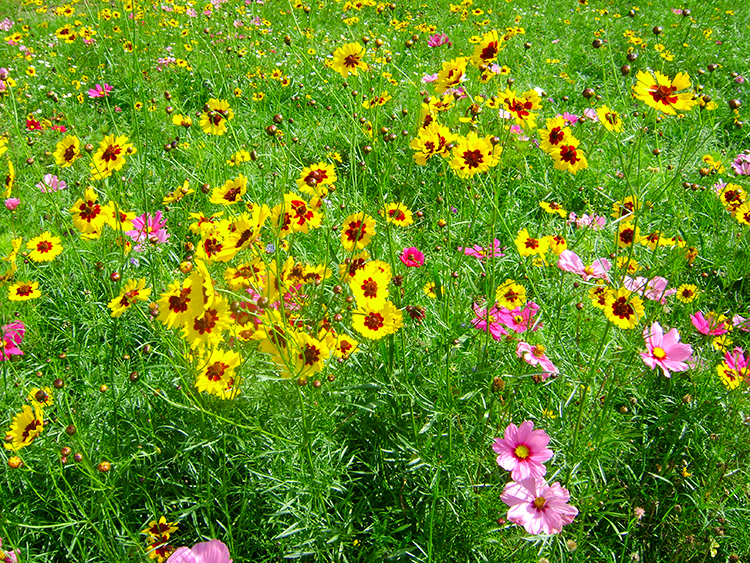 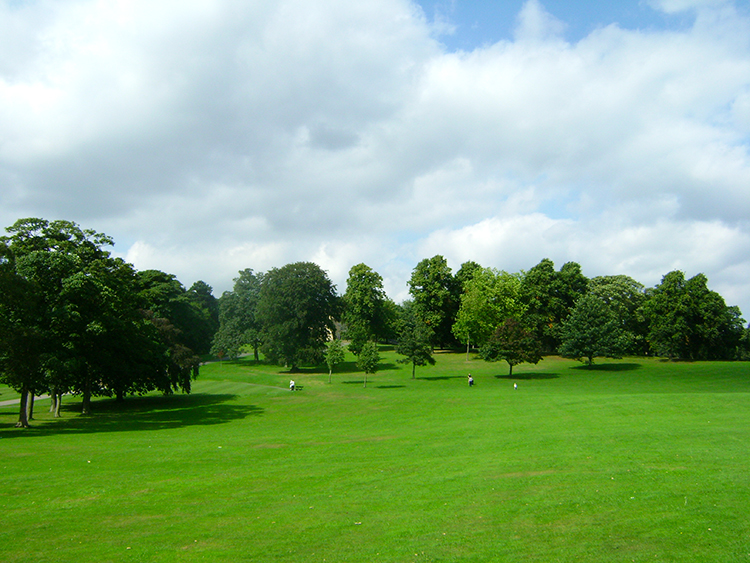 I concluded my walk by leaving the lakeside, crossing the car park at the end of the south road and by skirting around the west side of the arena which in its time has seen hoards watching performances from acts such as the Rolling Stones, Michael Jackson, Madonna, U2 and the local cricket team. Today the only spectators were a single family relaxing in the arena while a groundsman cut the cricket square. I walked on by the not busy scene and revelled in awe at the beauty of flower meadows set in selected areas of the park before crossing the cut grass open spaces of the park back to the point where my Roundhay Park walk began. Two magical hours had elapsed.