Summary: Having done variations of this walk before such as Middlesmoor, Scar House Reservoir and How Stean Gorge I thought it was time the extend the round of Upper Nidderdale by completing the walk on the top moor on east side which covers Lofthouse Moor and Dale End. Then after the descent to Scar House Reservoir, rather than following the Nidderdale Way path on the In Moor track back to Middlesmoor I fancied exploring the moors and up pastures to the south-east ans making a line for How Stean Beck before heading back to Lofthouse. Thus the seed was sown and this walk created. 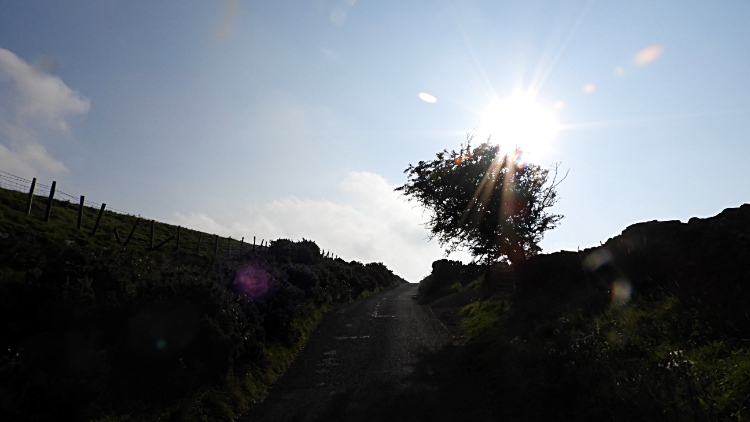 Climbing up the road from Lofthouse 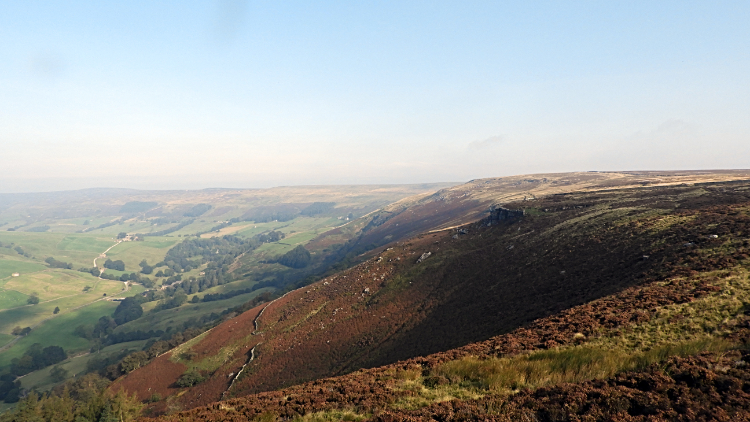 That is the way I like it. Practically all the climbing done in the first mile as Ronnie and I heaved our way up Trapping Hill road from the car park in the village of Lofthouse to High Scar, 230 metres higher, where we left the road to follow a path north and east across the moors. Hold on a second, let's go back to the start. Ronnie did the 230 metres. I did 260, having to turn back when we had reached the Thrope Lane path. There I said "Hold on Ronnie, I have left the map on the back seat of the car", having fumbled in my walking trousers side pocket and feeling it was not there. "Drat" I also said and cursed to myself as I made the unnecessary walk back and up again to rejoin my walking colleague. A group of four walkers who had parked up by Thrope Lane to take that route also had an amusing start to their day on my behalf. Anyway, fully kitted up and continuing up the road Ronnie and I were entertained thoroughly by Red Kites taking to the morning sky on their first flights of the day. About two dozen of them gracefully soared over Moor Edge and Lofthouse Level as we walked closely by. Their effortless flying is truly amazing to watch and it helped ease some of the pain of the climb. 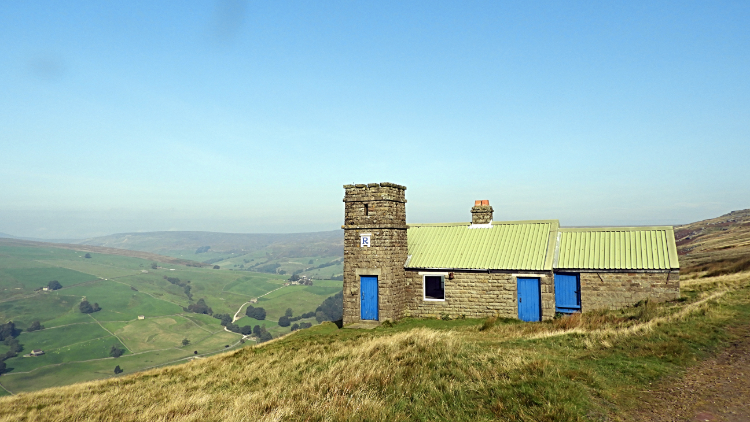 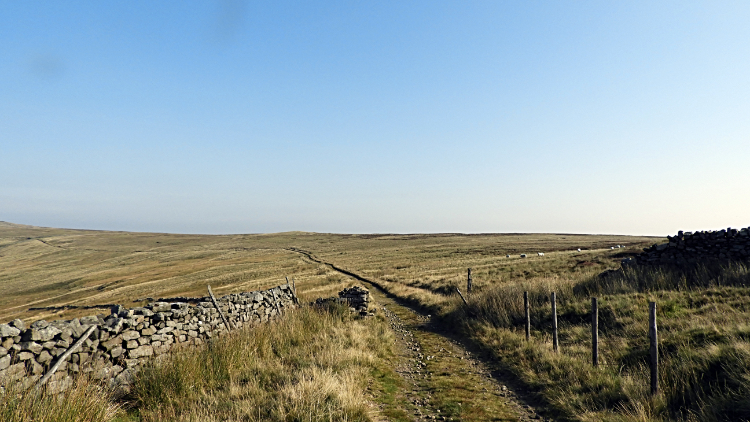 The path on the edge of Lofthouse Moor

As soon as we had left the Lofthouse to Healey road the first amazing views of Upper Nidderdale were disclosed. The high valley is dramatically arched through ninety degrees, curving with the River Nidd as it turns its course from due east to due south in just a kilometre of flow between New Houses and Limley Farm. Coincidentally where the well known and frequently explored potholes of Goyden Pot and Manchester Hole are. That is down there though, Ronnie and I were up here on the airy roof of Upper Nidderdale, soon arriving at the well maintained shooting house on Thrope Edge. We stood by the shooting house for a while admiring the view. And then we headed off on the path fringing Lofthouse Moor, walking steadily for some time as it was time to chat and get to know each other. He had recently contacted me offering company for a walk which I gladly accepted. He had moved to Lower Wensleydale from the south of England just a few years ago and I was happy to show him a new piece of God's Own Country today. 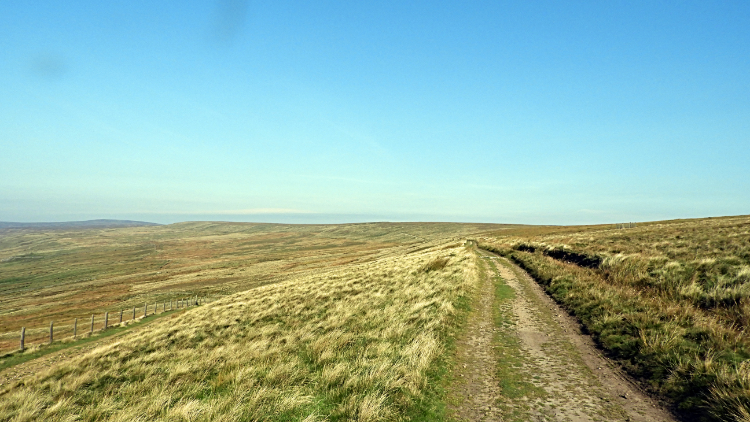 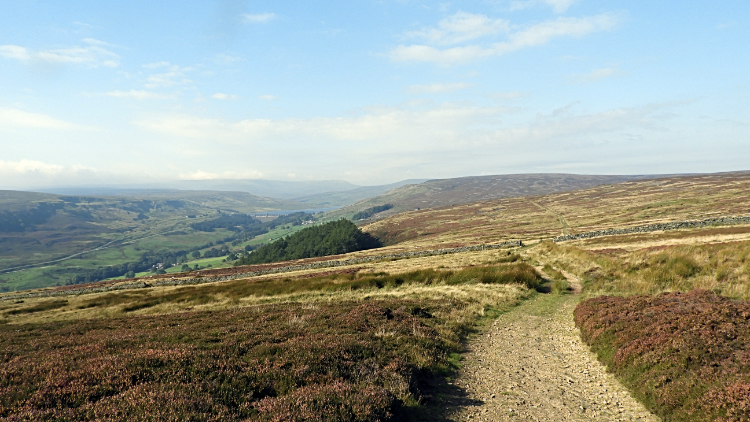 We were very fortunate with the weather. It was a late September day but we were enjoying a calm spell and though the sun was quickly heading further south day by day it still had enough oomph to warm us up in the unbroken blue sky of this day. Clouds were whizzing across the sky to the north of us and thus I suspected it might be cloudy over there in Swaledale but we were lucky. It was to stay sunny and fair for us all day. In the sunshine we continued the stroll on the good track, no doubt made so by landowners for shooting parties, to Dale Edge where the vastness of the moors to our right were clear. That was Masham Moor and by checking the map I saw lines of Grouse Butts were just to the east of us, falling in a line down East Gill towards Leighton Reservoir. Seeing that sparked an idea to do a Leighton Reservoir and Masham Moor walk one day. How about it Ronnie? 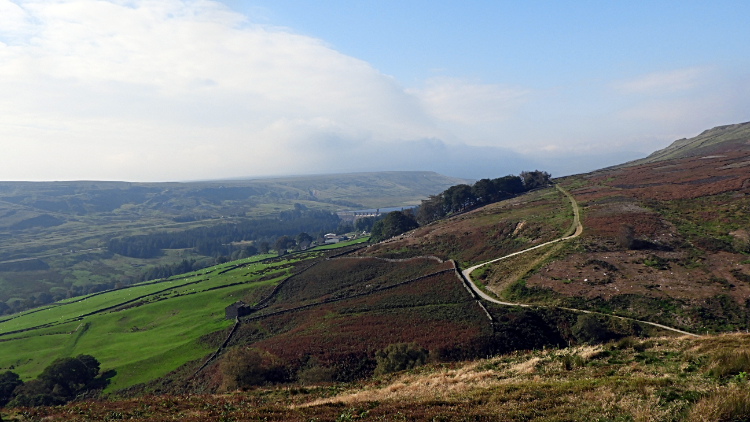 The winding path from Woo Gill 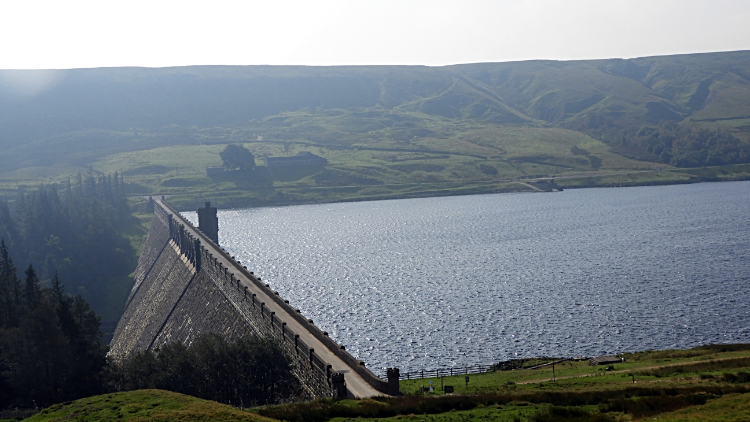 After a couple of hours of rambling in which we had covered four miles we gradually fell from the moor. First by a roller coaster down and up to Woo Gill where a couple of ladies were resting on as large flat boulder taking in the last of this years accessible beams of sun and then by way of the Nidderdale Way path we had joined at Woo Gill on a descent to the path leading across the substantial dam of Scar House Reservoir. The dam is a mighty one, holding back ten million cubic metres of water when the reservoir is full. Phew. Looking down at the dam from the path above is an awesome sight. And here and now the reservoir was full to the brim making the strength of the dam wall even more impressive. 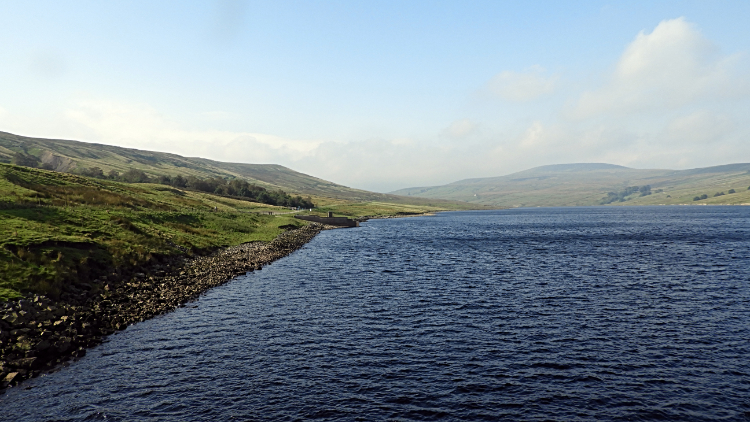 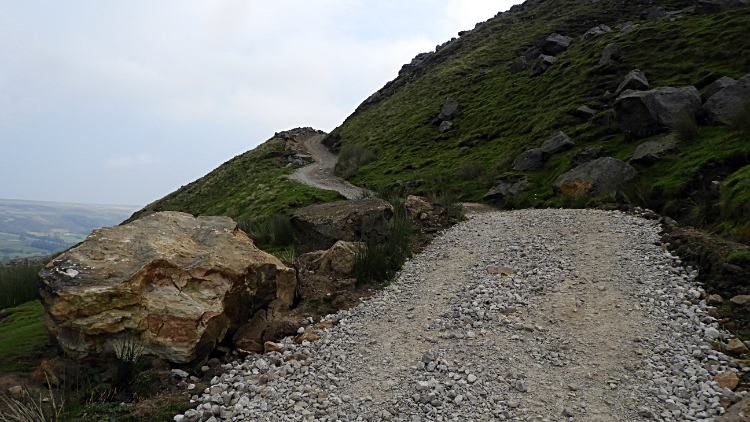 The climb to Scar House Pasture

Ronnie and I crossed the dam, north to south and then we found a convenient perch on a wall to sit and have lunch. Early lunch at only fifteen minutes past eleven but conveniently at six and a half miles into our ten and a half mile walk. And a good time it was to refuel too before the second and last climb of one hundred metres to Scar House Pasture which was looming on the resumption of the walk. So having tucked in sufficiently we trotted off and up the track leading up the bank of the south side of Nidderdale, a loose hardcore stone track which is a skating rink in winter. I recall quite a few times climbing up and slipping down the ice sheets formed on the track in the cold of winter. I once saw a chum fall flat on his backside right in front of me despite making all effort not to do so. This time no problem, just the huff and puff of two young per-pension seniors getting up the steep hill. It was a relief to be stood on the flats of Scar House Pasture where a sign gave us an opportunity to stop walking and read it. It said 'This land is being managed under the Countryside Stewardship Scheme'. From Scar House Pasture we arrived on the walled track of In Moor Lane leading to Middlesmoor. No sooner had we arrived at the walls when we left the enclosure of them, turning right by a stile to follow a field side south bound to Armathwaite. 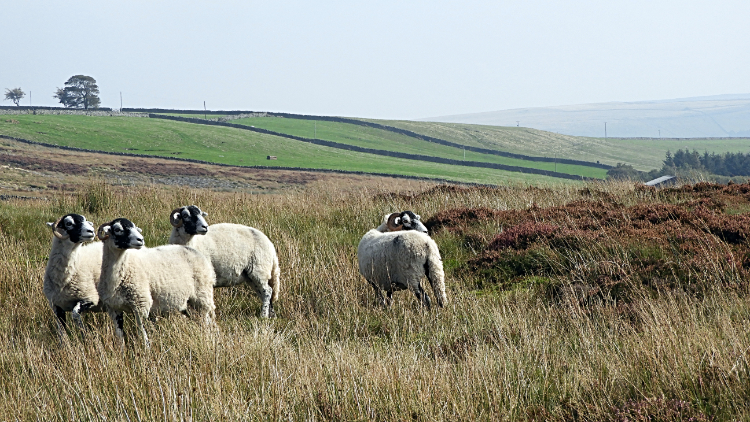 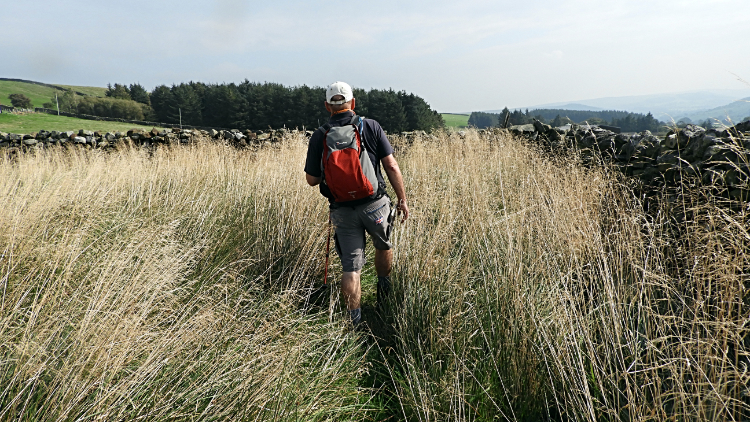 A permissive path, dashed green line on the map was clearer on paper than on the ground. No matter how hard we tried we could not find a firm line and even with keeping us true by constantly checking our position on my GPS unit did not help at all. In short we made our own way along the field line. Part way along a group of Swaledale sheep looking puzzled at why we were there kept an eye on us as we relentless made our way on the best options through the wispy dried long grasses of the field. It was never difficult and in fact I find these events lots of fun. Ronnie was all jovial too. The fun of a walk. One field led into another and here we knew we were on the right line because a gate let us through the wall. A line of Grouse Butts, marked on the map, helped further with keeping our line. These Grouse Butts had not been used for years. Heather had completely grown over where shooter would have rested his gun. Then a difficult bit over Ruscoe Beck. Hop, step and jump. Over we were. After the beck we tracked a little bit up and down a field wall, looking for a gate or stile on the permissive line. Exasperated a little... "Where the blooming heck is it".... I found it was not a gate or stile at all. It was step stones set into the wall. 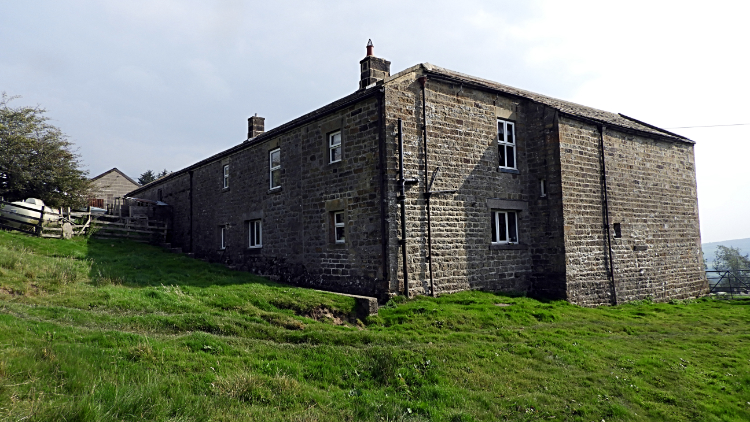 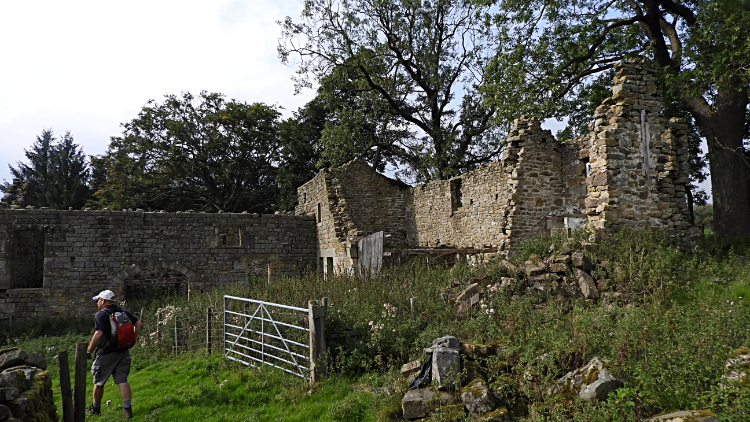 The ruins of Ruscoe

Once over the wall we crossed another small paddock field to reach a gate. Here the route was clearly set as a message attached to the gate read 'PUBLIC FOOTPATH. Through gate immediately to RIGHT of house gable end NYCC'. Plain enough. Keeping the line Ronnie and I walked past the buildings of Intake Farm. It seemed eerily quiet at the farm but it was clearly a working one with a big aluminum barn and huge metal silo. Vehicles were there too with a couple of stock carriers open at the back. Sheep in or sheep out? Don't know, everyone on the farm must have been indoors having their lunch. It was twelve fifteen, just afternoon. A field crossing later we arrived at what was once another farm with substantial buildings. But this one was clearly unworked. Ruscoe is a farm in ruins. Whatever happened to the farm is unclear but it seems to have been abandoned for some decades now. The main house has mostly collapsed but an adjoining barn with a lovely arch is still standing. Though all roofing is gone. From all buildings. I am surprised it has not been scavenged more for the dressed stone on the remaining structure. There was a paddock orchard and more barns. It was a crying shame to see such a desperate sight. 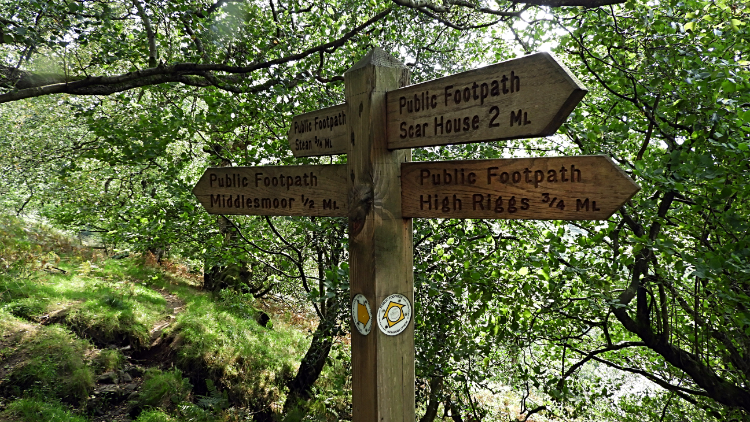 Choices at How Stean Beck 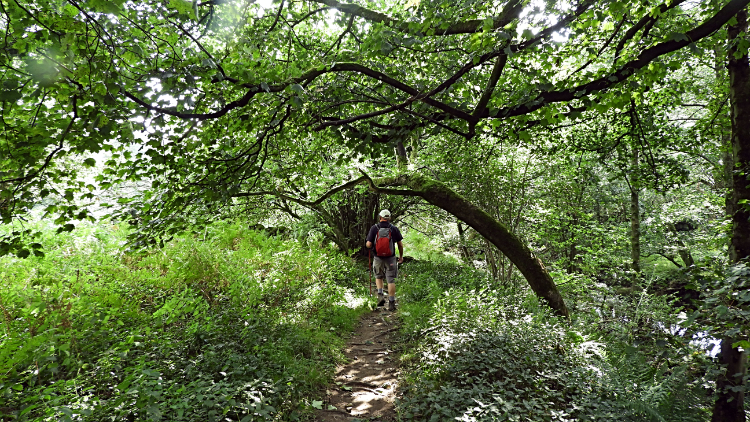 The pretty trail beside How Stean Beck

From the sadness of Ruscoe we carried on, ever descending across a couple of more pasture fields to reach the cover of trees shielding How Stean Beck on both sides. Here the path was utterly gorgeous, especially so as the sunshine piercing the leaf canopy gave a glittering radiance to the walk through. Before reaching waterside we arrived at a crossroads of paths giving us the options for Middlesmoor at a half mile or How Stean at three quarter mile. Scar House at two mile, been there done that. High Riggs three quarter mile, no thanks the wrong way. Anyway, the route was set to How Stean anyway and we were not doing another climb. So on and along the glittering path went we. 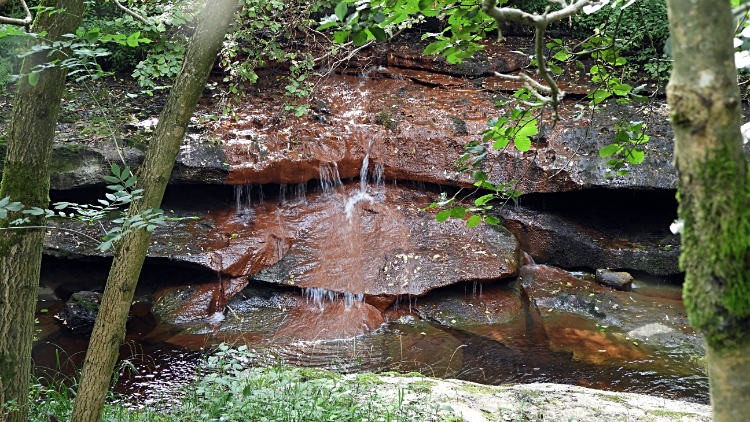 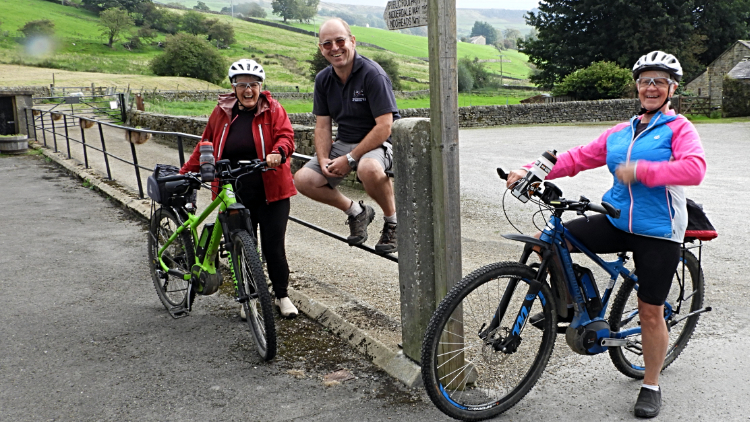 How Stean Beck is a delightful watercourse to follow. Small cascading waterfalls were scattered all along the way as it flows down from the watershed line of Wharfedale and Nidderdale at a point south of Great Whernside. Rocks of varying colours bed the beck too, predominately white and gray limestone but we found some vivid red rock too. Just before the beck tumbles through How Stean Gorge we crossed a footbridge to follow the road from Stean to Lofthouse, concluding our great ten and a half mile walk. In the village we passed the Crown Hotel. Oddly four bottles of milk were stood on the window sill by the front door. Still there at half past one in the afternoon. And then we were back at the car park. While taking our boots off and getting ready to go a couple of ladies turned up on their bicycles. We got chatting. Having just returned from completing the Scotland North Coast 500, Mandy and Janet the Ripon never give up girls were a delightful pair. It was a real treat meeting them and a fitting end to a great walk.